This is the second post I'm doing today. Trying to catch up, will continue with two posts a day until caught up. First post Thursday - San Carlos to Los Mochis is below this one. Sorry about the erratic way it looks. I wrote them in Word and tried to copy and past them into Blogger. Some of it worked, some of it didn't. This one seemed to paste a little better.

Of course, Thursday night, in the truck stop in Los Mochis, we were both in bed early. No computer, no TV and tired of reading, what else was there to do?

So Friday morning we were both up early, before first light actually. Did I mention that we had run out of water in our water tank? One of the reasons we left Totonaka after three days Paid for 7!] was because of their water supply – or rather lack of it. Bill left the hose to fill the tank on for an entire day and we got less then a half of tank of water. Personally, I think it was way less than a half a tank because by the time we settled in Los Mochis we only had about two flushes and three hand washes of water left. The water pump was sucking the last drops out and shuddering with the effort. We used bottle water for necessities rest of time there.

We left at 7:10 when the rising sun was right in our eyes. Between the dew that formed on the windshield during the night and the dust and smoke in the air and the sun it was an ugly start to the drive. 237 miles later at noon we arrived at Las Jaibas Trailer Park in Mazatlan. We are the only campers here! More about that later.

Did not take any pictures during ride. Too much glare and not much to see.

The highway in Sinaloa leaves a lot to be desired. One stretch will be nice and smooth and just as you relax into driving it goes to rough, which is okay, or to horrid which is just that Horrid! No rime or reason for when it changes. And they have the gall to charge tolls. For quite a while we were following a bus so we knew when his brakes came on we needed to slow down. Either the road was full of pot holes or there were topes or vibradores. Of the seven toll booths on this stretch two were open both both charged us 216 pesos for both vehicles. The rest were “donations.”  A couple of them demanded 50 pesos and were not happy when we only donated 20 pesos. There is always a lot of farming equipment on this stretch of highway. Again watch for the signs for topes, lots of them and vibradores especially by the Pemex stations and toll booths.

We exit the toll road just before Mazatlan at the Mazatlan Playas sign. It is six more miles to the campground entrance. Las Jaibas has electricity, included in site charge, water, sewer, and swimming pool, Wi-Fi in the office. Washers and dryers. Depending on the exchange rate, if you pay for a month the rate is around US$16 a day. All kinds of transportation in to town on the street in front and 1 block from ocean.

We parked in “our spot” which is in the back part of the park. Over the years we’ve planted plants around the site. Most of them made it through the summer. However our Wi-Fi cable somehow got broken over the summer so need to go to town and pay for the next few months and request a lineman to come out and fix cable. [Now that is a story!]

After getting set up and cleaning up we rested a bit then took a drive through town. Did not take many pictures. But will start again after we get back online. We did end up in a demonstration on the Malecon. One lane of traffic was at a dead stop all the cars sported balloons and signs about wearing masks, stop the deaths etc. It stretched from the beginning of the Malecon at Valentino’s to the Fisherman’s Monument. For all intents and purposes, they were just parked in the street. Some of the newly planted center divider and newly paved street. 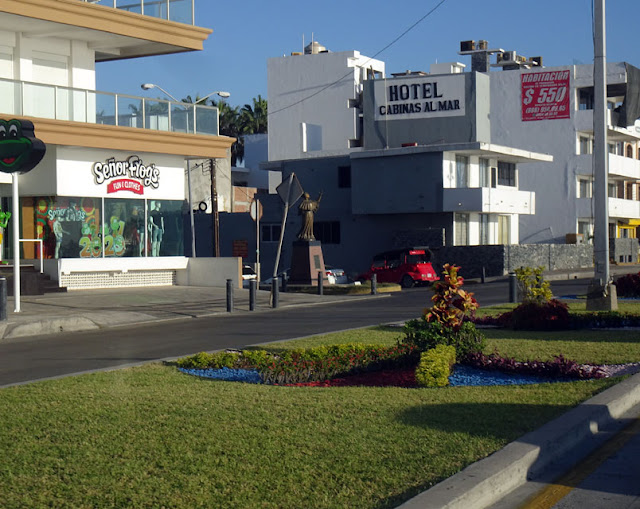 The demonstration. Lots of cars with balloons and signs. 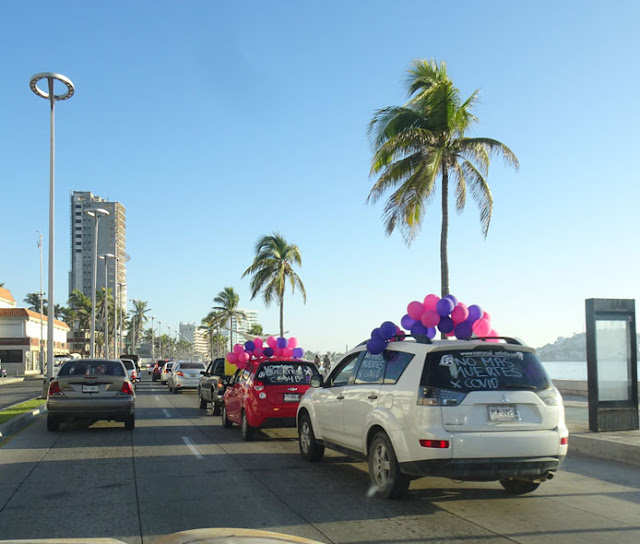 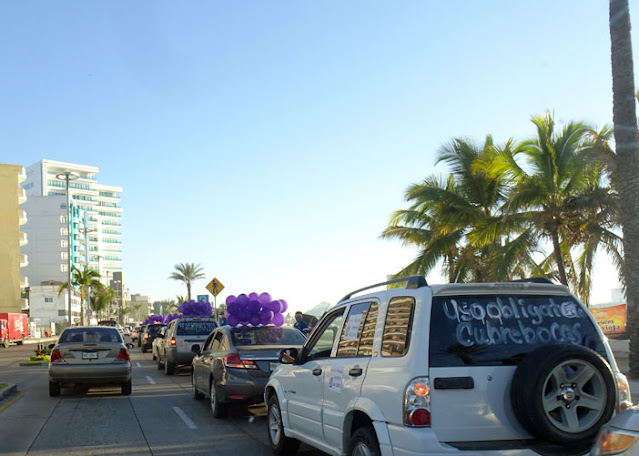 About 2/3rds of the people walking around were wearing masks – the rest…We did stop at one of the big grocery stores on the way home. Didn’t look like the handles of the carts had been sanitized, so we used our own alcohol wipes to do that. To get inside you are stopped at door, you must be wearing a mask, your hands are squirted with sanitizer and your temperature is taken. Then you MUST walk through a rubber container of sanitizer. Luckily we only bought three things because I forgot plastic bags are no longer used. [All the young kids and older men and women who used to bag the groceries for the tips are gone.] Our cloth bags were still sitting in the car. Also as we tried to go out the door we came in we were directed to the other doors on the other side of the store to go out.  Controlled traffic. Sanitizer was placed throughout the store, clerks wore masks and aisles had arrows directing traffic and blue stickers indicating six feet apart. There weren’t many people shopping but no one seemed to follow the arrows or the big blue dots.

Back to RV – Discovered we have 11 very clear digital TV stations. Most from Mexico city. A couple from Mazaltan. At least it is some noise.  I don’t understand what they are saying but Bill translates if it is interesting.

To bed early.  Still resting up from the lovely drive down here. It is extremely HOT and HUMID here. Not fun at all to be outside.

Happy to hear you are safely in Mazatlan. Hot and humid - like the hot but not too crazy about the humid but if here is a breeze you can manage. Enjoy your time there but stay safe.

Glad to see you made it safely ..Yeah Vicam is something else...Anyway, relax and have fun,... We're jealous !!!!!