Tuesday and Wednesday. Miracles do happen.

We didn't do too much the next couple of days. But things were going our way, kind of.

Tuesday morning. I whined until Bill gave in and we went over to Torres for breakfast. I took my laptop because a couple of days before I'd managed to connect to their Internet to download books to my Nook. So why not use their Internet to start catching up on my blog. So why didn't I...well that day their Internet wasn't working. Their sweet IT lady worked and worked on it and couldn't get it working. Oh well, it was a good idea. And we had a great breakfast. Bill had an omelet and I had oatmeal. 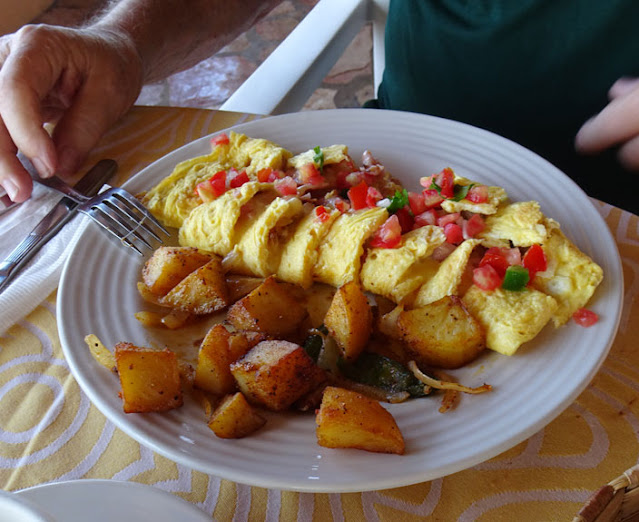 The huge agave had been dug up and cut down. Wonder why? 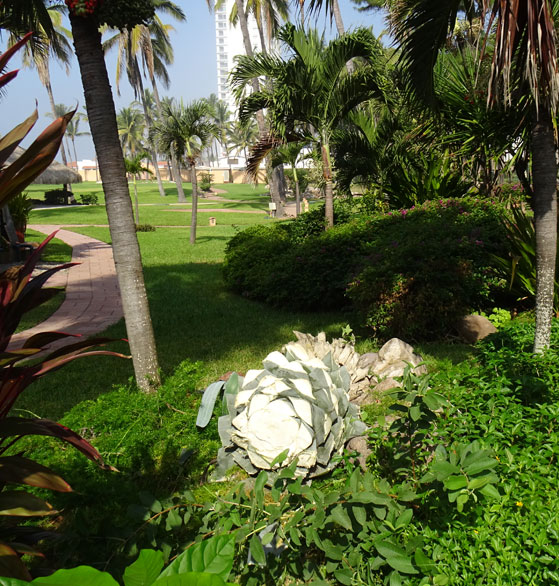 So back to Monday and getting things done the "local" way. After we got home Monday Bill disappeared for a little bit. Then he came in and asked me for the modem and box, with all the paper work in it and a copy of his passport and 5000 pesos. I saw him outside giving everything to Rafael, the wonderful caretaker - of gringos - and maintenance man here at the RV park. Hum....I thought. When Bill came in he said we'd have Internet by the following week. Okay!
Oh, we also asked Felipe if we could go over to the hotel he owns and use the Internet there. He told us there was no Internet there either. Cell tower had been blown done in last storm. Really - just his two places were effected. Strange.
We stayed home rest of day until just before sunset. Then we took a ride up the beach a bit to just get out and enjoy the air. The sunset was okay, not spectacular but pretty. 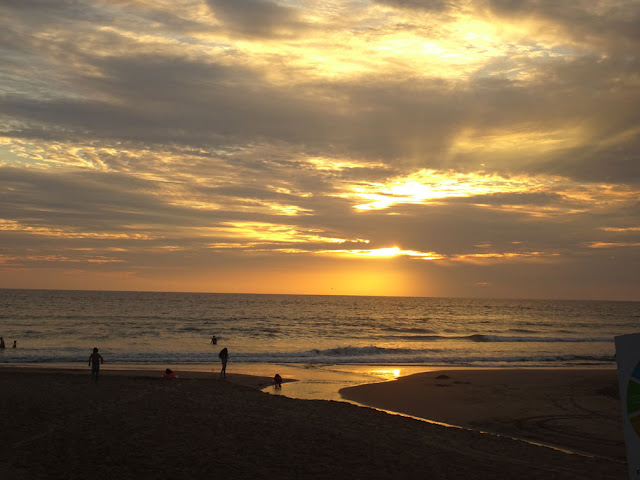 He was just standing in the water showing off. 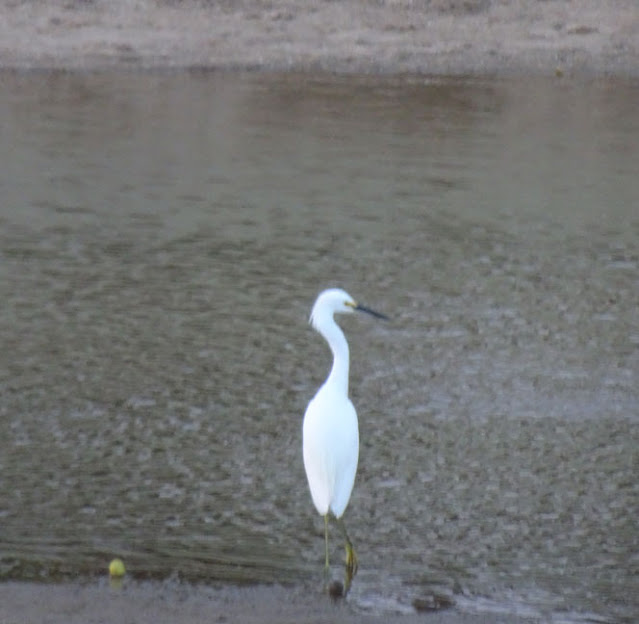 This is usually full of water from the ocean to the roadway. Wonder why it is so dry. There is usually no sand showing here. 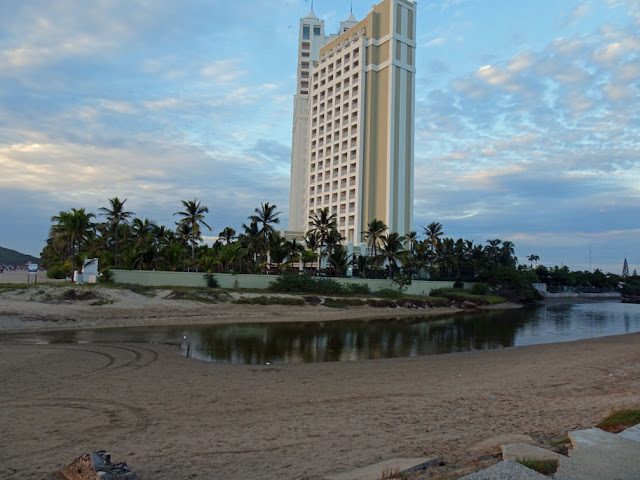 Another reason we go there is to visit with one of the beach vendors who we've known for years. He was heading to his truck just as we arrived. 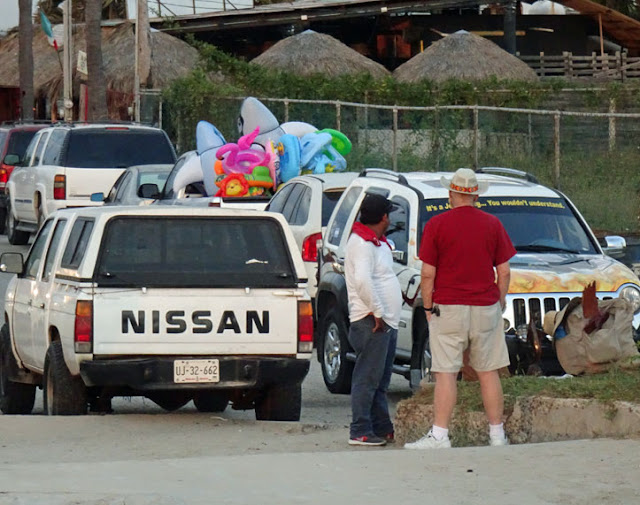 A small band on their way across the sand to play in front of the Rui hotel. 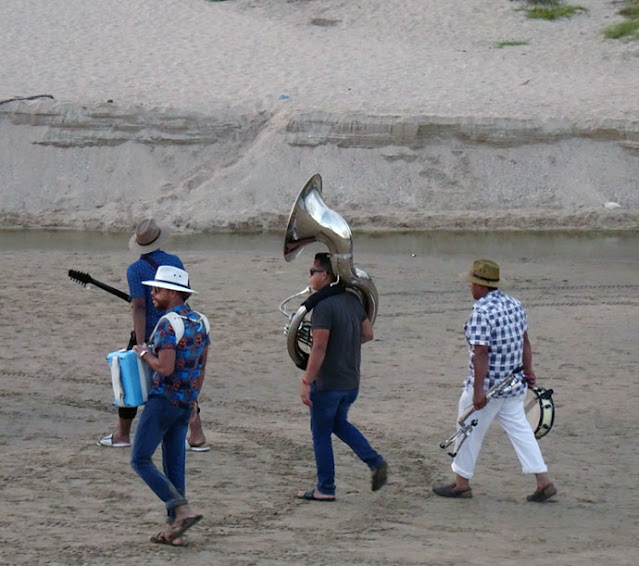 Watched a couple of parasailers. This one landed right into the arms of the catchers on the beach. The next one we watched, wasn't as lucky. He landed in the water just off the beach before the catchers could get to him. The wind had really picked up and guess the boat driver misjudged. 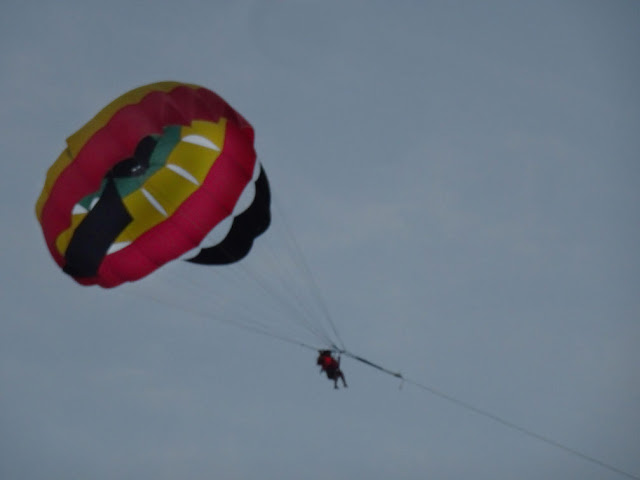 This vendor has a load to take home. Hope he sold something. 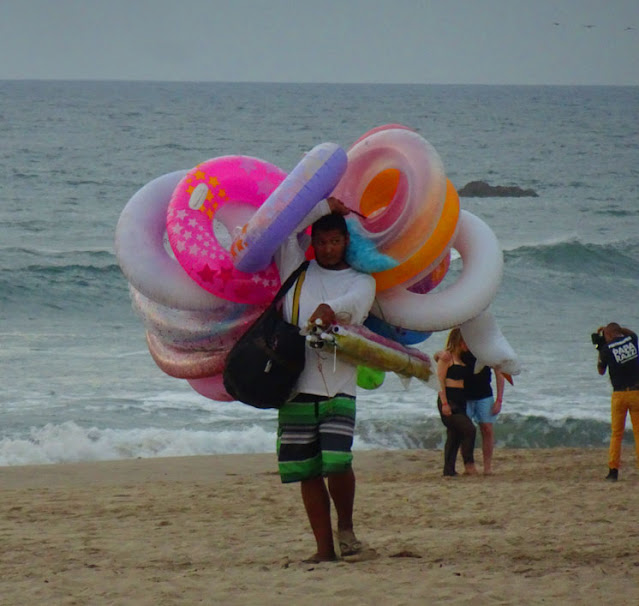 Just the birds and the moon. There must have been a thermal there. 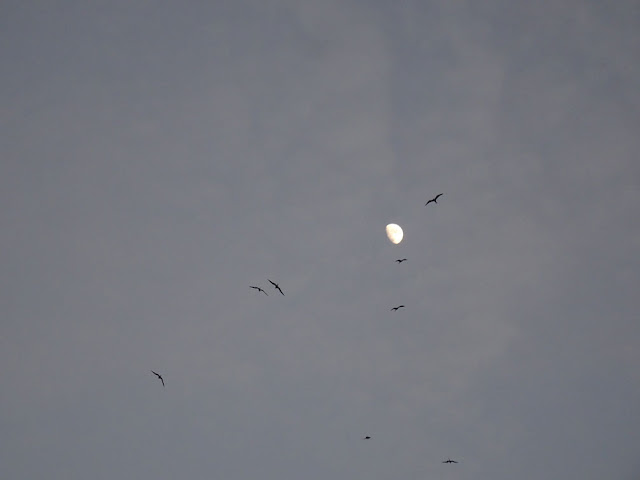 And so ended another day. Getting out a little makes the humidity bearable, barely. A breeze picks up about 5 o'clock
Wednesday - another day we didn't do much.

Still warm out. Pablo the auto mechanic we use every year to change the oil/filters etc in both vehicles came over about 9:30 to work on them. 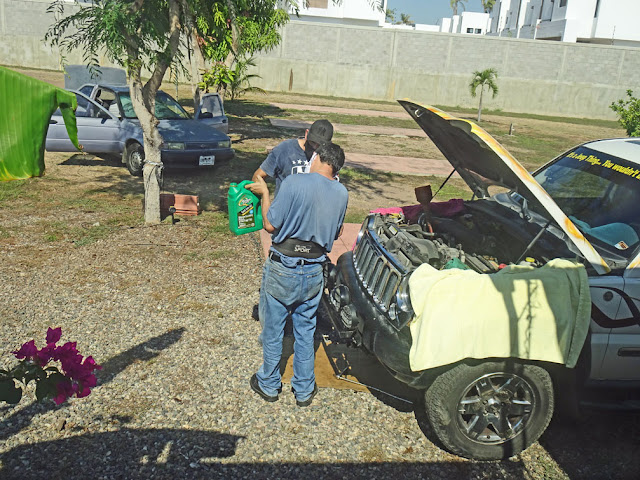 His helper now does most of the work and Pablo supervises.
About noon I saw Bill outside talking to Rafael. He handed Bill back the box with the modem. Hum...So I went out to see what was going on. Rafael, bless him and his daughter, had given every thing to his daughter and she went to the TelMex office and stood in line and got every thing done for us. I can not thank them enough. She got there just before they opened and still had to stand in line. So any way. Our Internet is paid until the end of March and a work order was in for the lineman to come and replace the cable. When would that be, probably by next week.  Okay.😞
So I spent a while that day typing up a couple of blogs and saving them in word, thinking it would make it easier when I got Internet. Just copy and paste right...Another story.
All of a sudden Rafael showed up and asked for the paperwork for the Internet. A tech had come to fix the parks Internet and as long as we had a work order he would also fix ours!!!!! Had to run a new line all the way from the pole on the curb. Took him a while, but in the end we had INTERNET 😁😀😂 If Rafael hadn't of seen him we would probably still be without Internet.

I couldn't wait to start working on the blogs. Copied, Pasted - oh wow! What a mess the formatting was. Took me forever to try to fix it. If you read the Thursday blog you saw I didn't do a very good job of fixing it. By the next day I'd figured out how to paste it without too many problems. This blog I'm writing as I'm getting ready to post it.

Thursday and Friday we were out and about. Fun days.

Rafael sure is a helpful guy. And very resourceful. Enjoy the cinnamon buns Grrrrrrr...

Well, it doesn’t look like you are bored! Getting settled is always a chore. Since we have been at our winter home it’s been the TV, the fireplace, constantly looking for stuff you out away but now due to old age you can’t remember!

Nice to get settled in. The red bird the other day is a Vermilion Flycatcher.
Do you know what they use to cut the agave? I have some Century plants that I need trim.

Whst would we all do without Rafael...he is a gem!

Carol, Didn't know Felipe owns a hotel. Do you know the name of it? Park sure looks empty. I agree Kathy , Rafael is one of a kind. Wish we were down there.

Mark, He is a good man! The bakery will still be there when you get here.
Janet - Yep, we are finally settled, debating getting more plants for some pretty flowers. Maybe...Wish I could send you some of the heat from here. Though this morning it was pretty cool.

tom - He is such a pretty bird. No idea how they got the agave out. I know in the fields the workers use a flat rectangular shovel/ spade to take the leaves off.
Kathy - thanks for stopping by. Without Rafael things would be a lot harder. Felipe wont let him wash the RV any more.
Carl - The hotel is called The Blue Pacific. pretty basic. We stayed there a week a couple of years ago when getting the RV painted. 650 pesos a night, TV, WiFi, little kitchenette. Wish you and a lot of other people were here too. Many people who depended on the northern tourists are hurting.