Monday - a day to remember

Monday started out really nice. Our first sunrise with sun instead of gray fog. 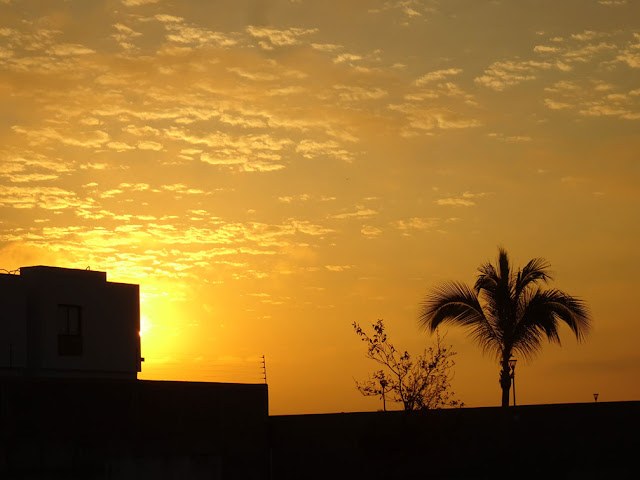 About 8:30 we jumped into the car and drove all the way across the street to Torres restaurant. The grounds are so pretty there. [The next day this wonderful agave had been cut down. Uprooted, stripped naked!] 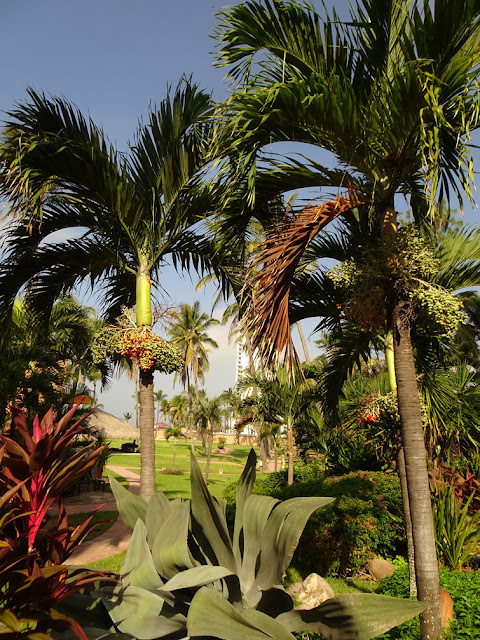 Check out this flower. 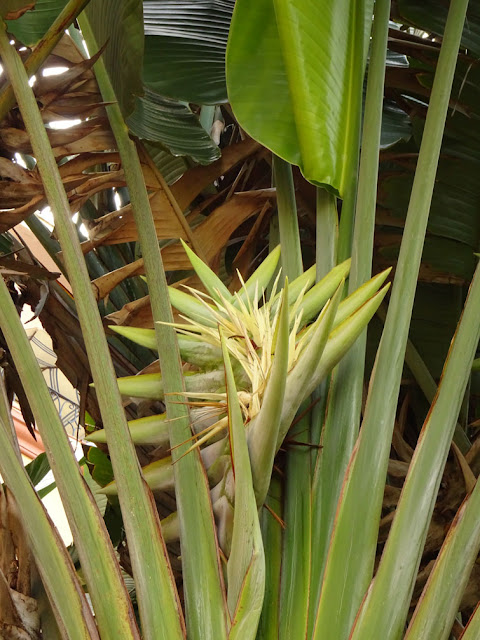 Sat in outdoor restaurant, I had their wonderful Belgium Waffle -yum. Looking out open windows, there is an island out there. Some where. 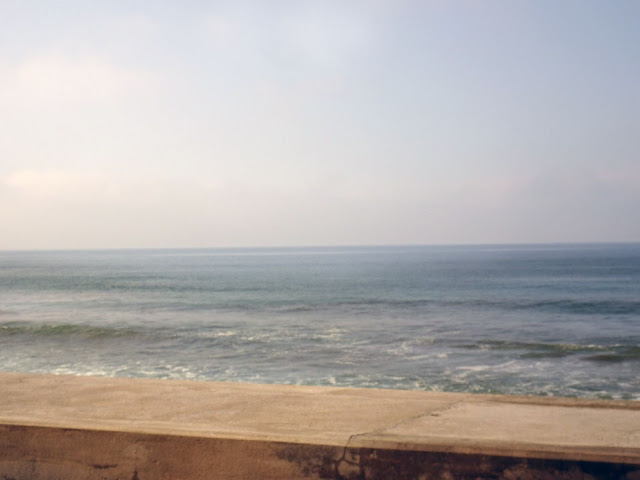 After breakfast we were on our way to Centro to go to the TelMex office to pay for our Internet and get a technician out to replace the lines.
Going by the new decoration in the round about in front of Valentino's. I think it is supposed to be a fountain too, but haven't seen water in it yet. 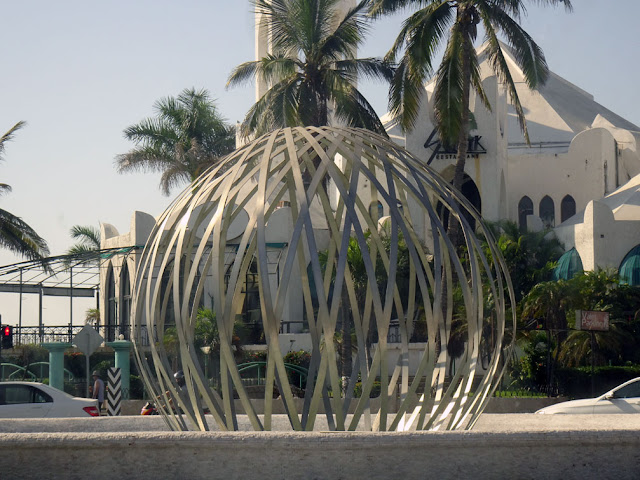 Got across town and parked in the lot we always parked in last year. There are new owners. Not very friendly ones. Bill asked about getting the Jeep washed - owner wasn't too enthused. Then we heard, "ELEPHANTES!" For years Bill and one of the men who washes cars in the street have been yelling this to each other. It started years ago when we parked in the street and the guy offered to wash and watch the car. Bill told him not to let any elephants sit on it. So since then ELEPHANTES~ He was working in the parking lot washing cars. Good. We were directed to a parking space between a big pickup and the wall of a building. No problem. Remember this for later.
So off we went walking to TelMex, about 3 blocks away. In a plastic bag we had the router in its box and in the box all our paperwork. Also in the bas was a case with some of Bill's watches that he planned on taking to the watchmaker who cleans them and replaces the batteries every year.
From here everything goes downhill. We walk here all the time, but this is the first time with the very high humidity and a mask on. By the time we reached the building our masks were wet. AND THE OFFICE WAS CLOSED! Well nuts, now what. How were we going to get our Internet? There was a security guard there so Bill asked him where we could go. The guard wrote the address down on the router box. "Insergentes and Juaraz"? Where the heck was that. We knew that Insergentes was way back the way we'd come. So now what?
A pulmonia was waiting on the corner. Bill showed the address to the masked driver, he nodded yes he knew where it was. Get in. Big bottle of sanitizer strapped to the side, driver motioned to us to use it. Okay. And off we went. Way across town from where the Jeep was parked. Did mention way across town. Pulmonias are open like golf carts, no doors. Usually hang on for dear life to the seat back or poles by the seat. Do we want to touch them, nope. So feet braced away we go. Quickly. Finally got there and there was a line in front of the building to the corner and around the building for about a half a block. We got out. Pulmonia driver tells us he will be back in an hour. Wishful thinking. We stand in line, the line is not moving. By about one half hour I am done with standing there and don't want Internet that bad. The heat and humidity were making me ill. So Bill goes up front to check out how long it might be. Guard tells him, three or hour hours! Bill gets a couple of phone numbers from guard who says everything can be done by phone. Just use WhatsApp - hum...what is whatsapp or whatever? We flag down another pulmonia and head back to Centro.
Now things get a little better. As we are heading down the street towards the parking lot we see the wonderful bakery we found last year. Tell the driver to let us off there. Go inside, smells so good. Rueben wasn't there but his wife was. They now have 12 employees and need more. 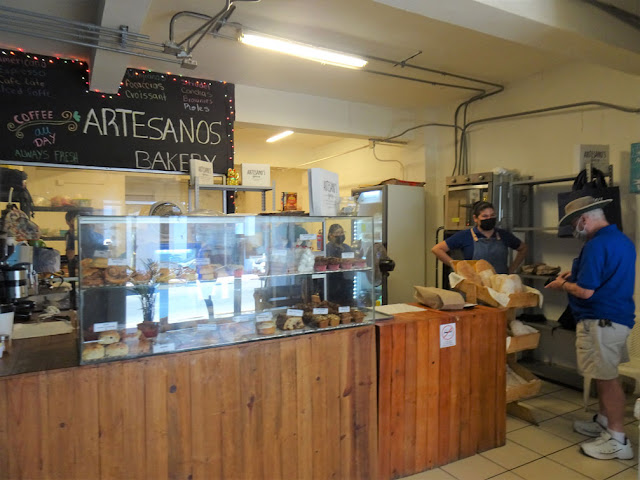 Of course we bought some of the delicious cinnamon rolls. Our reward for the day. 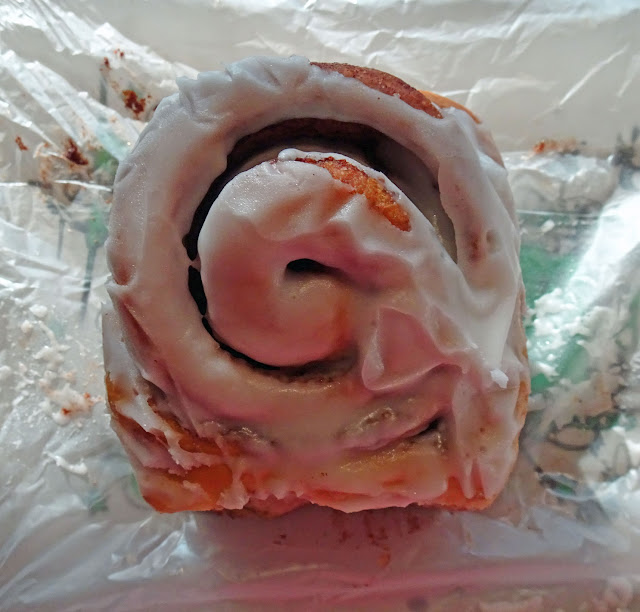 So on we went to get the car, just two blocks away.
Thank goodness, AC. Well - While we were gone the parking lot had filled up. When we went in we just went up the drive turned right and parked. The X is the Jeep between the building and the big pickup. Easy parking job. 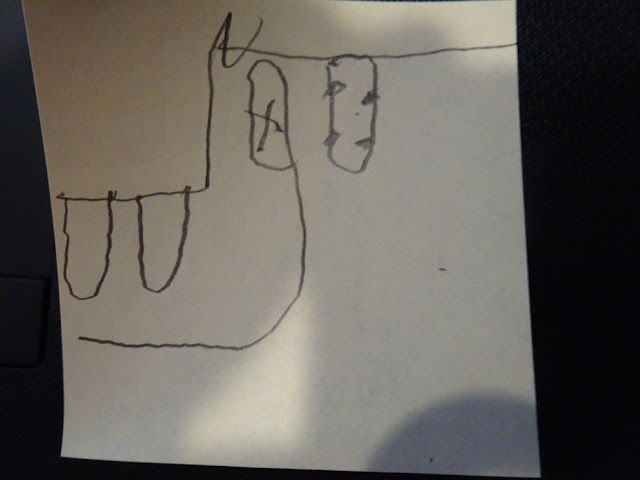 Well getting out wasn't so easy. Bill is an excellent driver and the Jeep is small and very nimble. BU T now there was a line of cars behind us - very close behind us. Bill had to make a hard left turn backwards with very little space to get around the first line of cars [yes those are cars - I'm not a very good artist.] Now there were more cars nest to the wall on the right and lined up along the driveway in. The middle XC is the Jeep after getting out of the parking space. Now he had to get to the driveway out.  No way. So had to sit there for awhile waiting on the owner/manager to come and move the third car from the left so we could maneuver enough to get head out of the driveway. No way do you want to back into the street. Both of us were sweating by the time we got on the street. But the car had been washed. 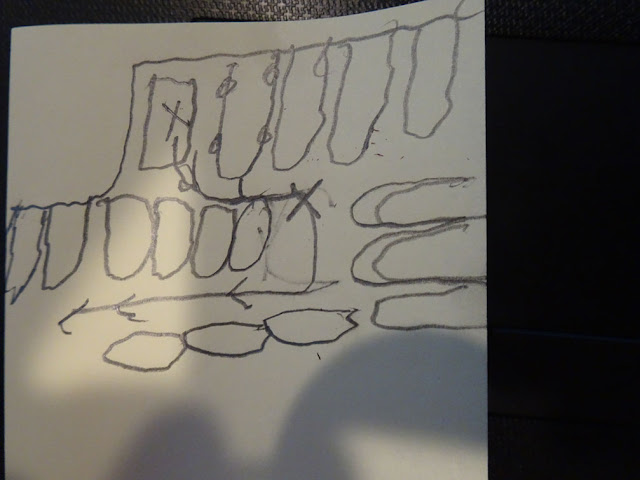 From there we went to the watchmaker and he was open - if you've read this blog for a while, you know it is hard to catch him open. But there was no parking so Bill did it the local way. We stopped in the street he blew the horn the watchmaker came out to the car to pick up his watches. We will get them back when ever. So we did manage to accomplish one thing, well two, we got the rolls, that day.
On the way home Bill told me not to worry he'd get Internet for us the "local" way.
Spent the rest of the day inside in AC. More later on the Internet.
Posted by Carol and Bill at 12:48 PM

as you can probably tell we do have Internet - so, now, does the rV park.
Gave a couple of the buns away, between us ate two. still haven't had ribs.

To what do you attribute the lack of guests at the RV park? (And in San Carlos?) Is it due to Canadians not traveling?

We really enjoy reading about your adventures, intentional and otherwise.

The fact the Canadians can't drive across the US border. Unless they have a home or rental here and can fly straight down, they can't get here.