Trip to doctor, problems with RV, full moon, and crepes

On Thursday we had to take a trip across town - way across town - so Bill could see if his infection was gone. Of course, lab test necessary and no results until first of coming week. Fingers crossed all is okay.

Some of the sights while going there. This wall art has also been here for at least 12 years. The men originally held a real flag on a pole that extended above the wall. 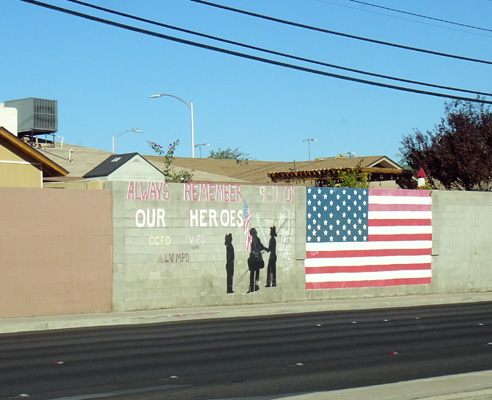 And some of the center divider art. As you come down the road he almost looks real. 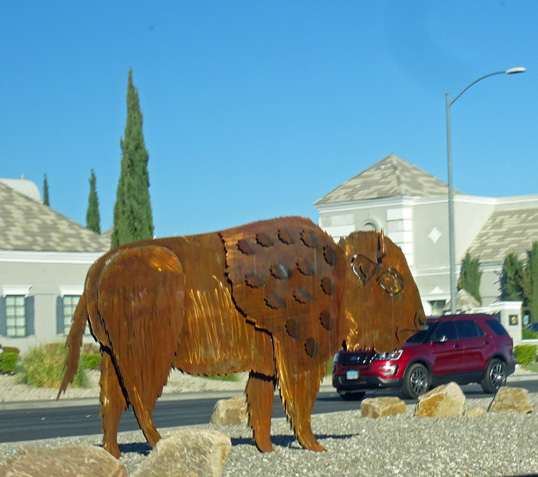 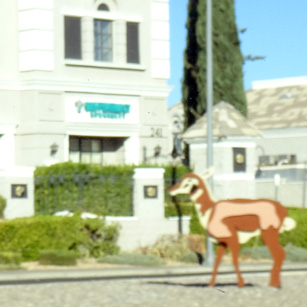 We picked up the RV yesterday and brought it home to start some rearranging and loading. I went to put the slides out and nothing happened. Also the 12 volt lights didn't come one. Flipping the battery disconnect switch produced no results. Well crap. When they put in the new batteries, both house and engine something must have got disconnected or... So took it back and left it. Won't know anything until later today. Think it is an easy solve though, with another switch or breaker in battery compartment.
Did remember to get outside to check out last nights moon. Picture doesn't do it justice. It was very orange. Fiddled with camera but couldn't make it pick up the color. 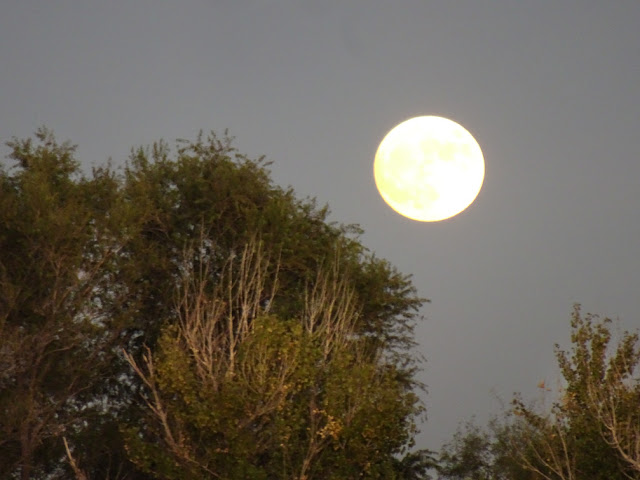 We'd kind of planned today as a day spent working in RV...can't do that. So what to do all day. Well Bill is making crepes. I ordered a quart of milk from WalMart and got a gallon. Need to use it up somehow. Also using up some unsalted butter I bought a while ago that I only used 2 tablespoons of. So why not make crepes to freeze and take with us. It will keep him busy for a while. Just beginning, batter made and butter melting in pan. 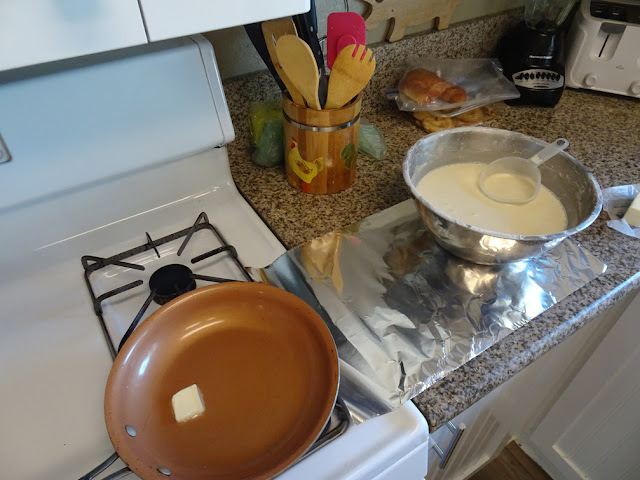 The gallon of milk and pound of unsalted butter that needed to be used. 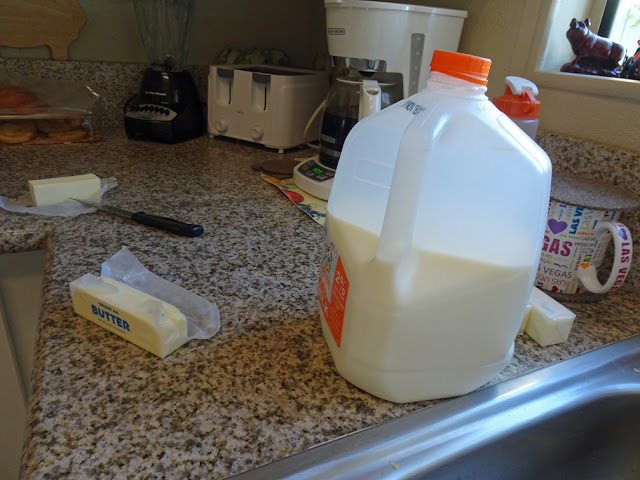 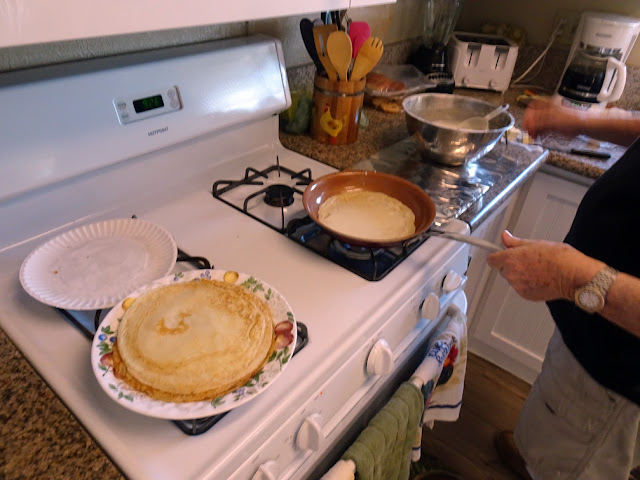 He uses a measuring cup to put the batter in the pan, uses a big nail through the hole in the cup to keep it from falling into the batter. 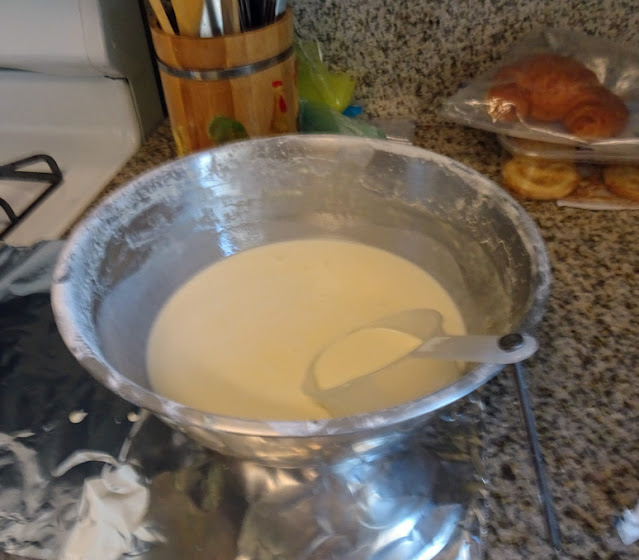 He never misses the flip! 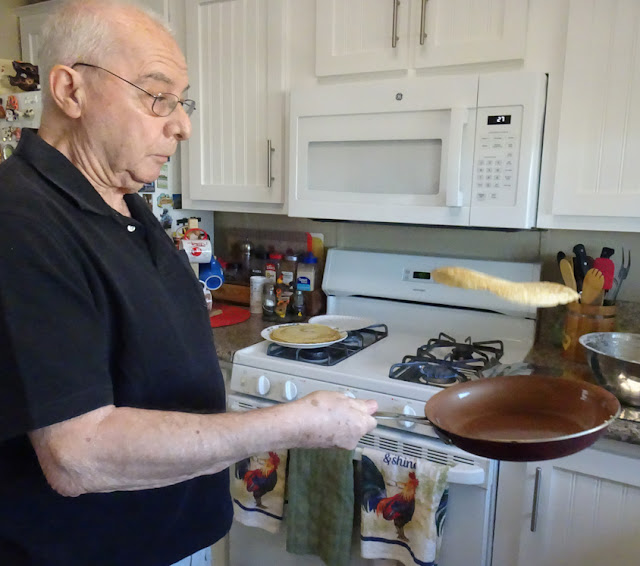 Going to separate them with parchment paper and freeze them when they cool down. Have tried freezing them so hope it works.
Another strange thing happened.Got our power bill e-bill and it was ZERO 0.00 balance. Oh, oh, Why? So called power company. Not only is it zero balance due, we have an $18 credit left??? Some how there was a one time $111 credit issued to our account. Works for me. Found money!

Stopped doing the puzzles that make my nose run but still sneezing, coughing and blowing nose. Wondering if all the meds I was taking for my hives were also helping to keep unknown allergies under control? Got to do something if it doesn't start going away. People give you really dirty looks if you cough while shopping - even with mask on.

There is a race I'm going to watch this afternoon and another one tomorrow so they will take up some of my spare time. Watched the race, Boring except for the ending.  Picked up the RV again, connected batteries wrong! All is well now, returned it to storage lot.

You could spread the puzzle pieces out on a baking sheet...and put them outside to "out-gas" before you do them. Those crepes look good! Do the copper pans still work good for non-stick? I've been looking at buying some. Thank you so much for your posts! Gives me something to think about besides covid and politics...ha..ha

Barb is 100% right about the off gassing, Iv'e had the same issue a couple of times with a book or two.

C-R-E-P-E-S!!! Well, that brings back fond memories of our time with you in Mazatlan. We will really be living vicariously through you guys this year. Hugs and crepe love to you both!!

The crepes look very good. Bill’s very clever way of keeping the measuring cup at the edge of bowl is so neat. Would be messy to set the cup on a saucer - going to remember that idea. Always enjoy your blogs and the photos and all you share with all of us. Will also look forward to blog posts on your trip to and while in Mazatlan. Will be missing Mexico this winter season.

Barb - I'm not going to be doing any more of the sneezing puzzles until the spring, good idea about airing them out first. Yep, the copper pans work great with non sticking, but ours are getting old so will get some new ones in the Spring.
Mark - sure hope something works cause I still have about four of them left. See you soon.
Nancy - He made so many I froze a bunch, hope it works. Sure wish you could make it down there this winter. Were looking forward to spending some time with you. You'll be amazed at how the city has updated.
Sandy - Will try to take a lot of pictures of different things this year. And of course of old favorites too. Starting to get cool here in Vegas.