Going to be a new mural in town.

As I said the other day, we sure haven't been doing much lately. But did get out to take a ride around town. And did go to the grocery store to find soft things for Bill to eat.  These have nothing to do with Bill eating them just thought they were interesting. Donuts for Valentines Day. 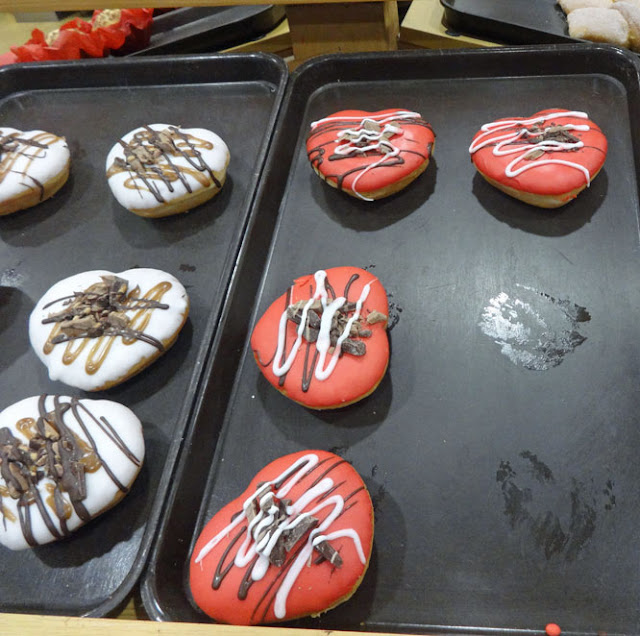 No idea what these would have to do with Valentine's Day, look more like Easter to me. But that is a long ways away. Speaking of Easter. Usually Mazatlan has a huge Carnaval - hundreds of thousands of people come here for it. Because of Covid last year it was canceled. This year 12 days before it would start they still aren't sure if it will go on or be cancelled. They (city, state and health department) will make up their mind 6 days before it should start... 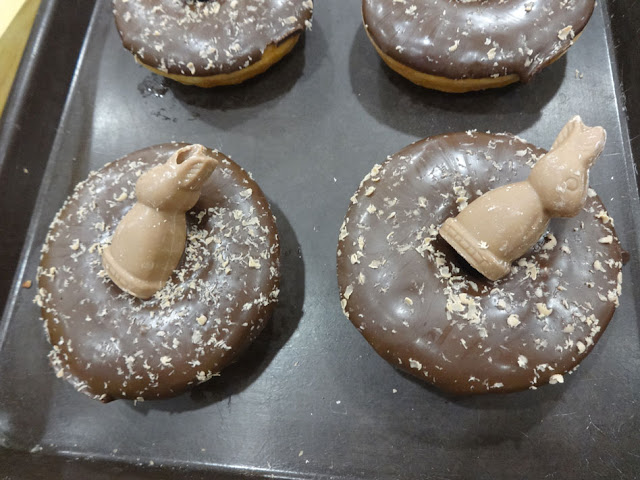 Because we were going up and down all the aisles we saw things I haven't noticed before. These cake mixes sell for about US $ 4.40 each. The regular cake mix on the right sells for US $ 3.60. 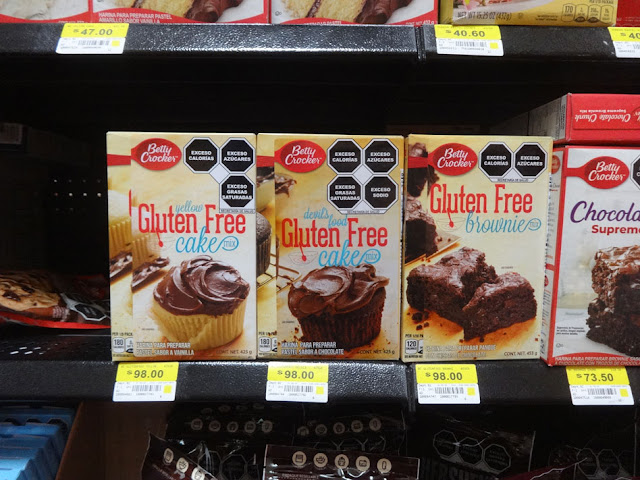 Update. He is finally feeling much better. It has been ten days since the surgery on his mouth. He is being very careful what and how he eats. Infection is finally gone. Swelling has completely gone away on his face. So things are almost back to normal. We did take a ride one day while he was feeling a little bit better. So some pictures from it. This is an apartment building in Centro. Would love to get inside it to see if it is modern or like it was when built. 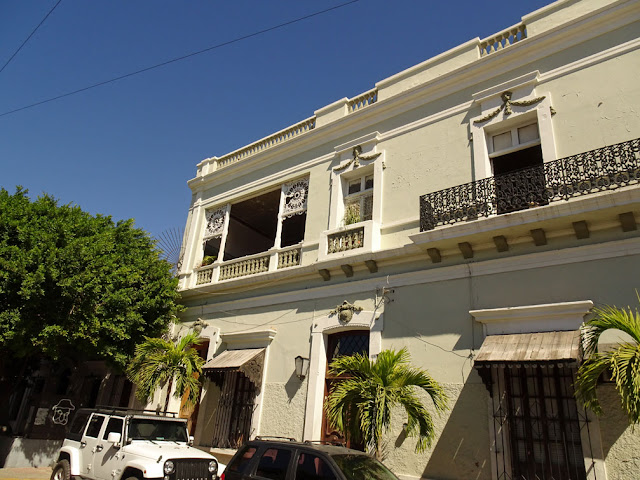 A roof garden. Don't know why the ladder is there. 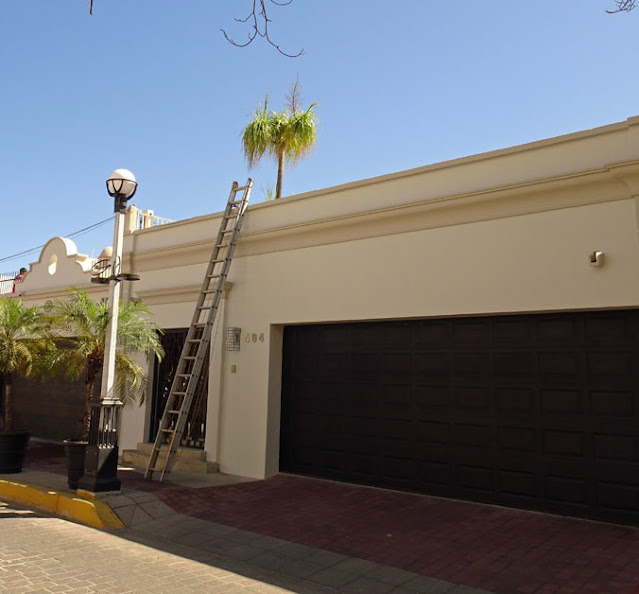 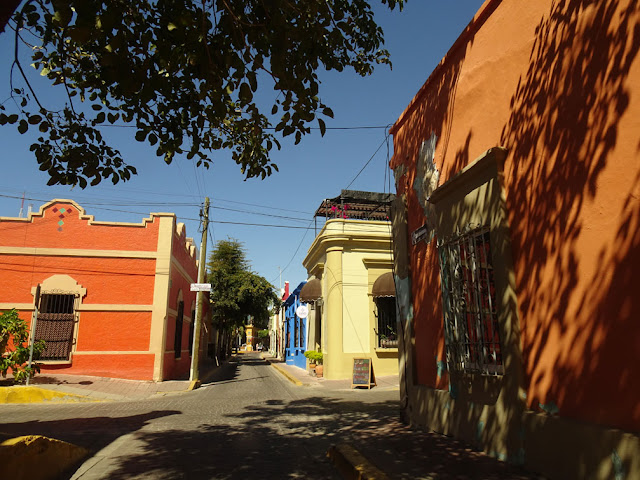 Hum... glad we were going left instead of right when we got to this intersection. This is one of the busiest streets in Centro and it is all tore up. No warnings of any kind. Usually it is full of buses going into the middle of town. 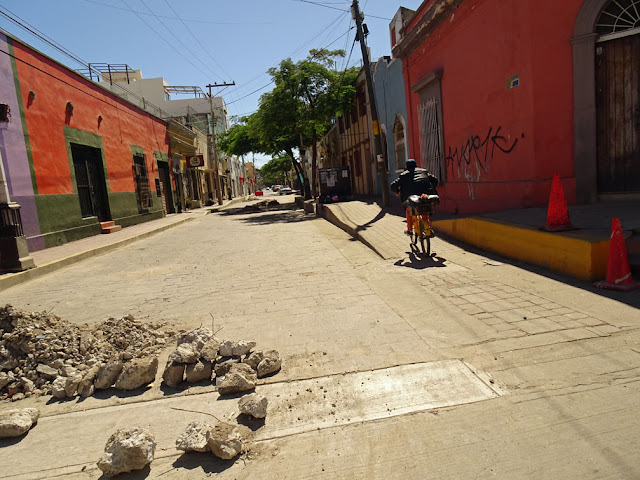 OMG! Some a$$hole stole the painting that has been on this wall for several years. Now why would someone do that! Broke the frame and took it. 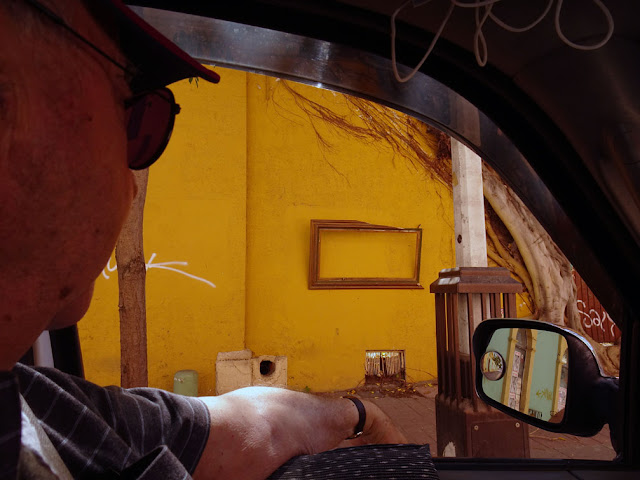 Ended driving out by the observatory. They are having a mural painted on part of the building. Very colorful. 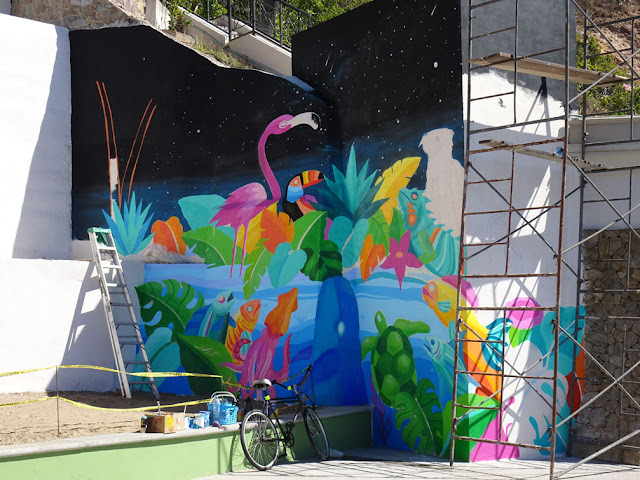 The pattern is sketched out where it isn't painted. 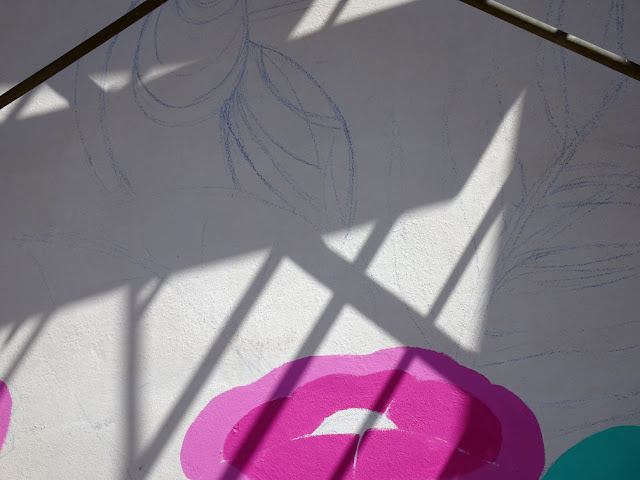 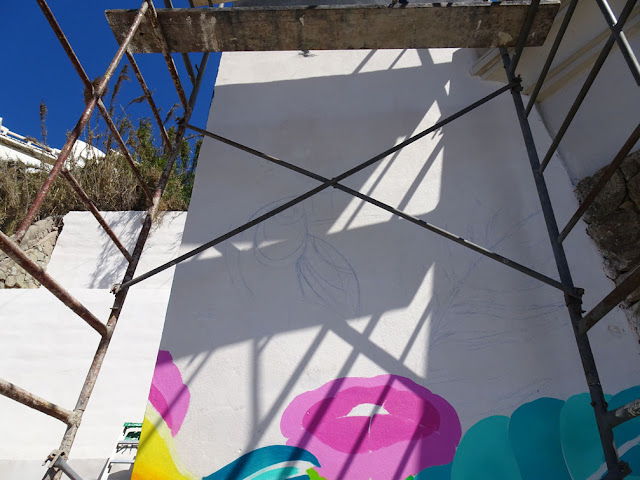 Across from the observatory is the cliff the crazy diver dove off of - and still does if he can get someone to pay him. Has very narrow space of water to dive into. Between the rocks and the cliff right under the white streak on the cliff. 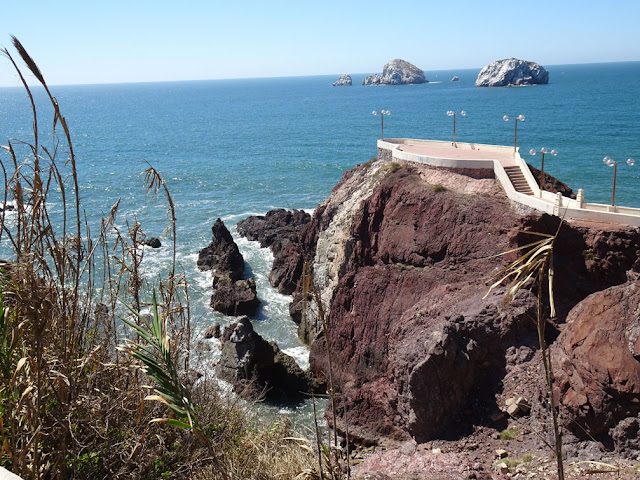 Guys working on the mural. 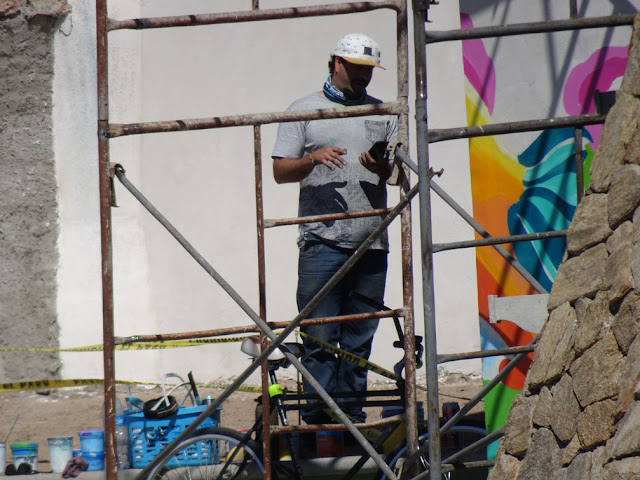 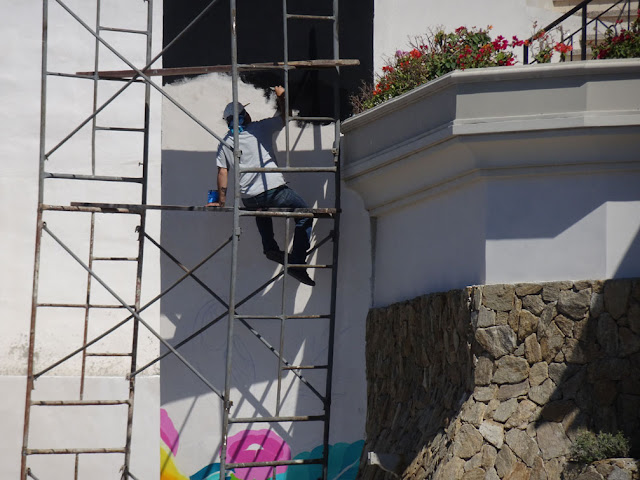 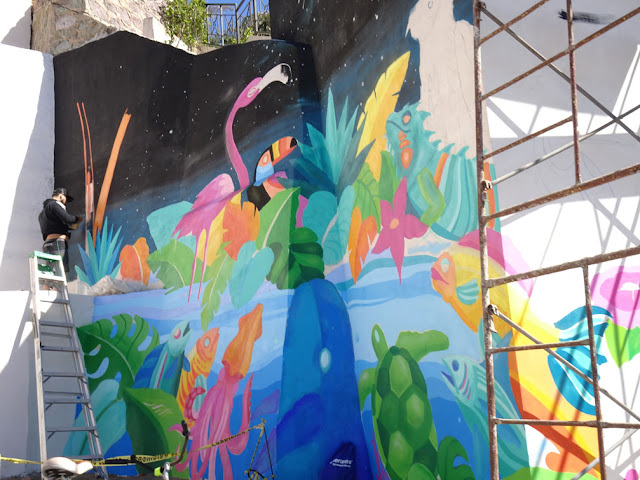 Noticed the wood at the observatory. Will be interested to see if they are adding something up there.  Or maybe it is a decorative cover of a patio or something. 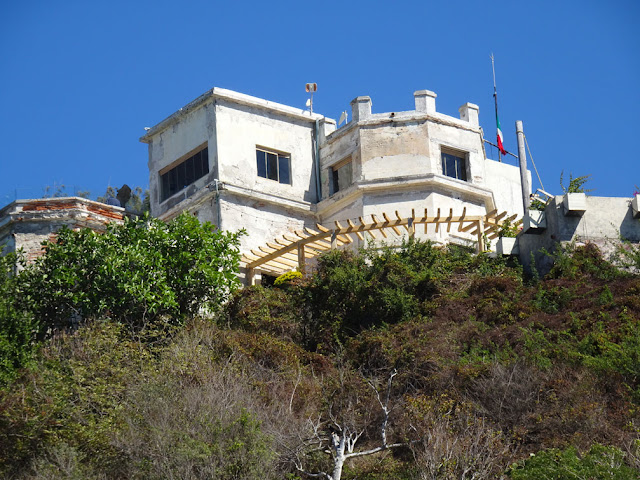 Fisherman out on the rocks. He has a bottle with a line wrapped around it. He unwinds the line and swings it around and lets it go into the ocean. 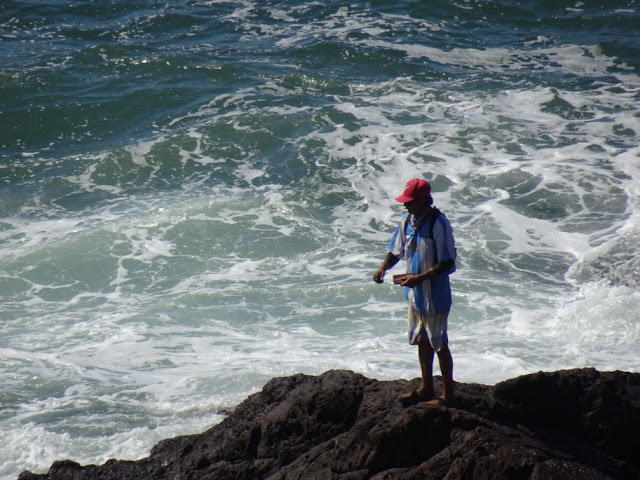 See him way down there on that rock. 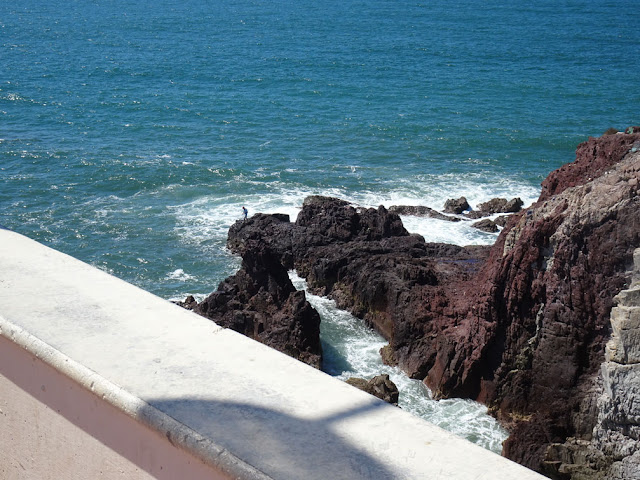 At least we got out a little bit.

So happy to see you out and about. Glad Bill is feeling so much better. Hugs!

Maybe at least Bill could suck on something chocolate!

Happy Valentine’s Day! As always I enjoy each and everyone one of your posts. The prices for cake mixes is quite expensive as I can get them on sale at home for 99 cents but at this time of year we do not enjoy beautiful weather like we have in Guayabitos so it is a trade off I think.

Are there any Monigotes on the Malecon this year since Carnival is in question? The Monigotes are a marvel and there have been some amazing ones over the years. Your posts always have so much information for all of us to enjoy. Thank you so much.

Doug and Nancy - He is almost 100% but it still gets hurting off and on.
Judy. He says he doesn't like chocolate, but he ate half a chocolate cake!
Sandy. They are putting them up slowly. Five so far. Nothing in the Plazuela Machado. I guess if you need gluten free you are willing to pay the price.

Carol, you are correct - I was thinking of the regular cake mixes not the gluten free when I mentioned getting them for 99 cents.