Another great day here in Vegas. Although the weather is warming up some again. Will be 98/99 for a couple of days and then cool down again.
We both went to see the doctor, Dr Ng [pronounced 'ing'] this morning for results of our blood work. He says I am perfect - thank you Dr Ng! Just kidding but everything is how it is supposed to be. Even my blood pressure medication is finally working. I have gained most of the weight I lost over last winter back though. So will work on getting rid of it. Maybe I should throw out the pan of brownies I made yesterday. NOT - There is a story there that I'll share later. No more Jelly Bellies and more walking should do it. Bill however has a problem, he is severely iron deficient - we knew he has had low iron for years but it is bad enough to do some thing about it now. Over 30 years ago he had 90% of his stomach removed so his stomach cannot absorb iron which makes him anemic. So anyway our doctor is referring him to a hematologist. The suggestion is to get an iron infusion. No iron is one of the reasons he is always freezing and gets tired easily. so we'll see how that goes. We couldn't be more pleased with our doctor. Our appointments were for 8:30 - by 9:30 we'd both seen the doctor, renewed our prescriptions, Reviewed all lab results and on our way out the door. Before we got home we got a call from the hematologist's office and Bill has an appointment next Wednesday.
So I am up to my head in projects. I thought I'd work on them today while watching NASCAR - and the NASCAR got rained out in Chicago. Nuts. I plan on making a t-shirt quilt for the RV. So am starting the tedious task of getting the t-shirt designs ready to sew.
A stack of shirts that have the designs crudely cut out. 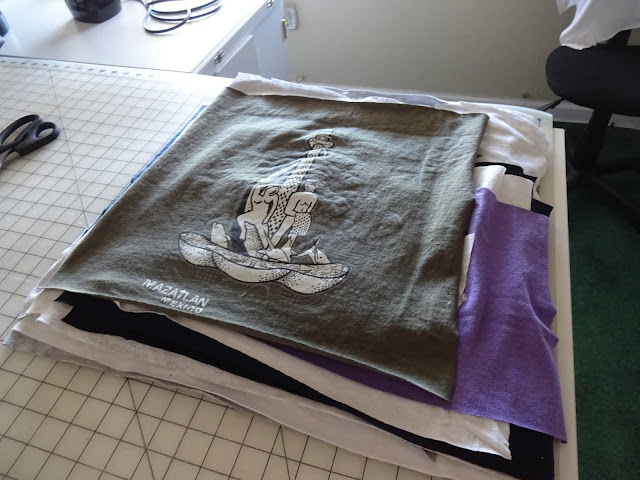 After cutting them out they have to be ironed on a fusible interfacing. Have to make sure the iron doesn't touch the interfacing so I'm kind of overlapping the designs. 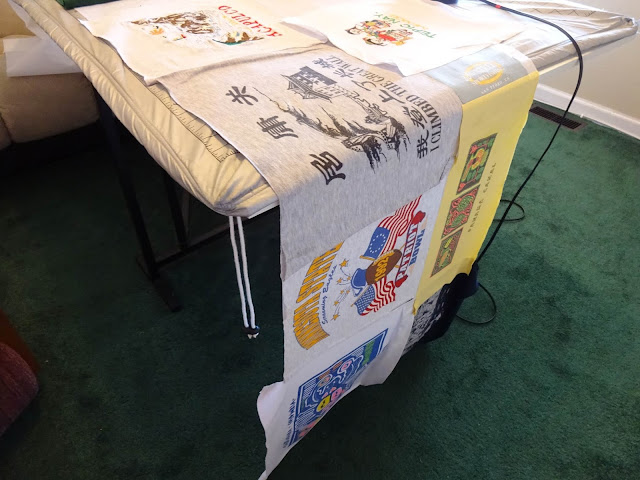 This is jut a bunch of them that have been fused - I just put them out on the table to look at them. They all have to be trimmed. And of course not one design is the same size as another one. Figuring out how to sew them together into a quilt will be fun. 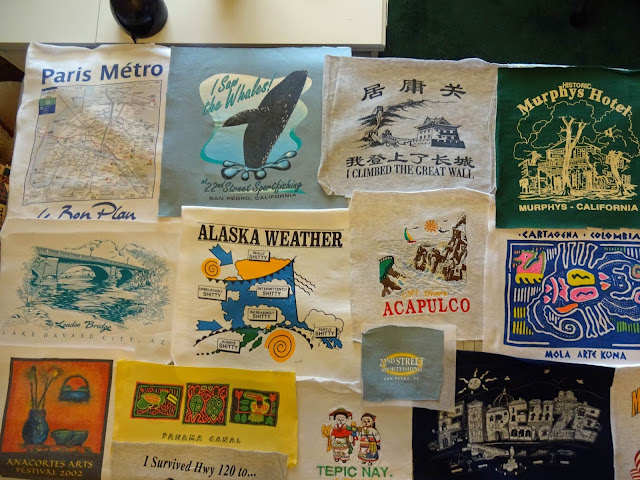 A stack waiting to be trimmed. After trimming a couple I realized they needed to be cut so the design is not lopsided. Harder than it sounds. 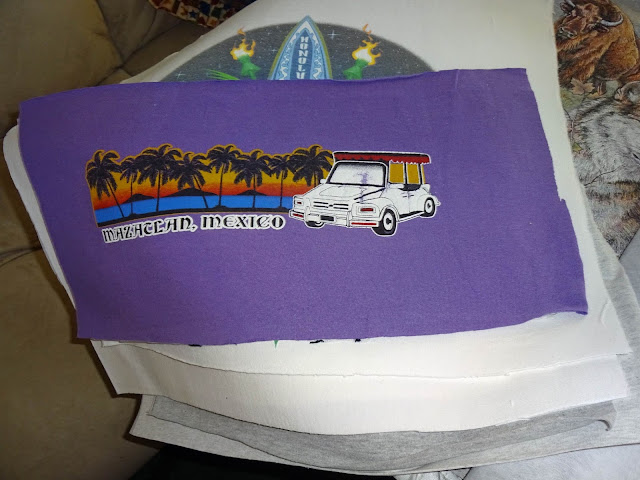 A stack that is trimmed. All different sizes. And I cut up my treasured Hard Rock Cafe shirts from all over. Yikes - they were too expensive to ever wear them in case I got them dirty and now I've cut them up. Go figure. 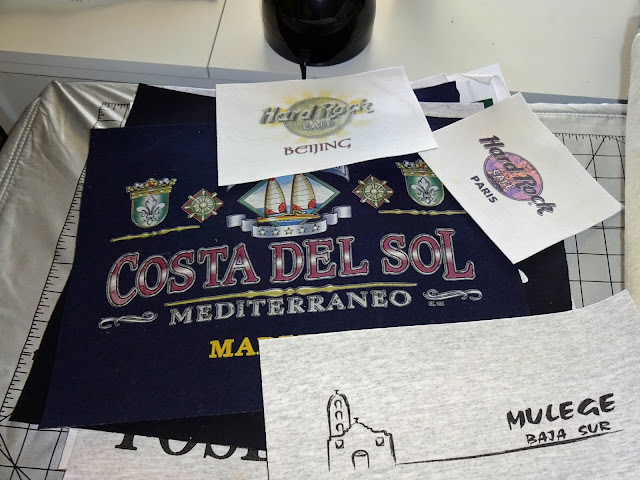 Like I said multiple projects. A friend sent me the picture of the pumpkin place mats. And of course I need to make them. At least I had a lot of orange material. So far I've got enough pieces cut to make 4 mats. Now I have to iron them and start sewing.
Next to them is my Christmas project. It will have 14 of these squares in different Christmas material - what I had left over from the Christmas aprons. It will just be a colorful throw to go across the bottom of a bed or on a sofa back. 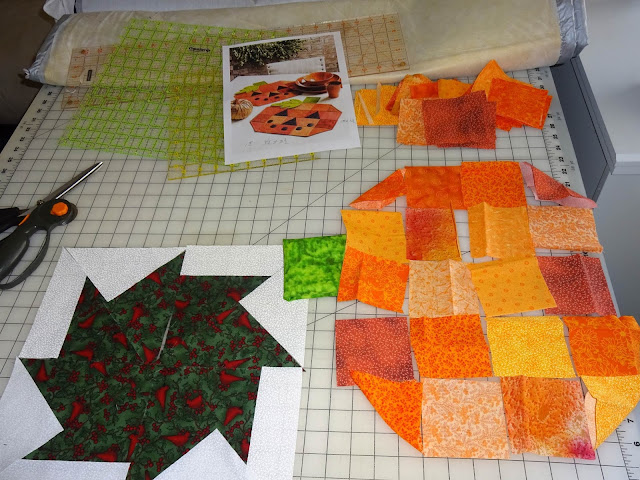 A closer look at the place mats. There will also be a leaf on the pumpkin. 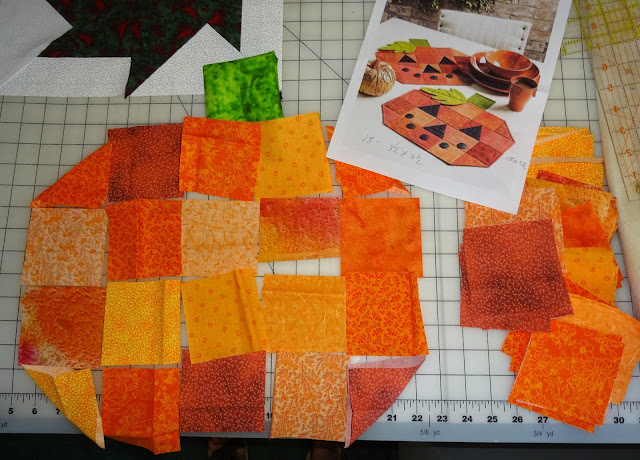 And a closer look at the quilt square. 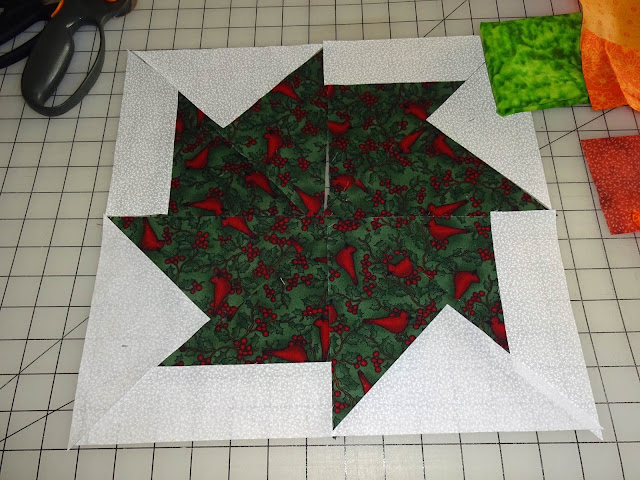 It is actually the same pattern as the bedspread I made for our bed a few years ago. 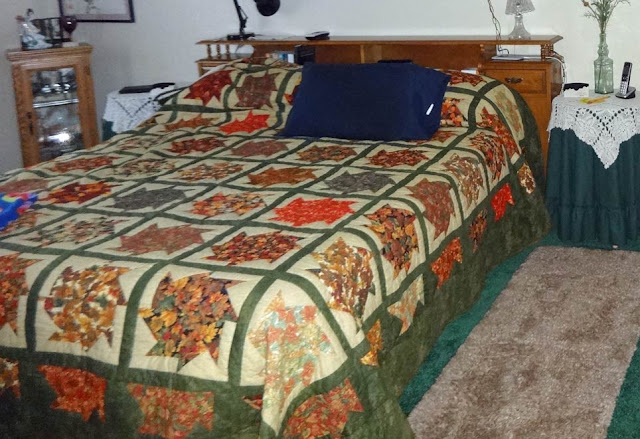 Enough to keep me busy for a while.
Back to the brownies - one of those "I can't believe I did that moments." I bought an expensive brownie mix. Ghirardelli Chocolate with Caramel and pecan no less. As I was getting ready to pour the batter into the pan I thought,  "Hum, this batter is really runny for brownie mix." Put it in the oven for 35 minutes, checked it. "Hum, this is not cooking." As I thought about it I went to check the mix box that was in the trash out front waiting for the garbage men to pick it up. Dug it out and read directions again. "OH CRAP!" Directions say 1/4 cup water - I remember adding 3/4 cup water. No wonder the batter was so soupy. So what did I do? Well I turned the oven off, left the pan in the oven and we went to run errands. I figured when we got back I'd either have cement or pudding. Turns out I had neither. I got brownies! I think they might have a richer taste if they hadn't been so watered down. But they are good anyway.