I think the header picture would make a neat wall hanging. Sure colorful. At one time there was talk of turning one of the buildings on this closed off street into a hotel. Never happened, I see it is for sale now, no improvements made, no hotel. 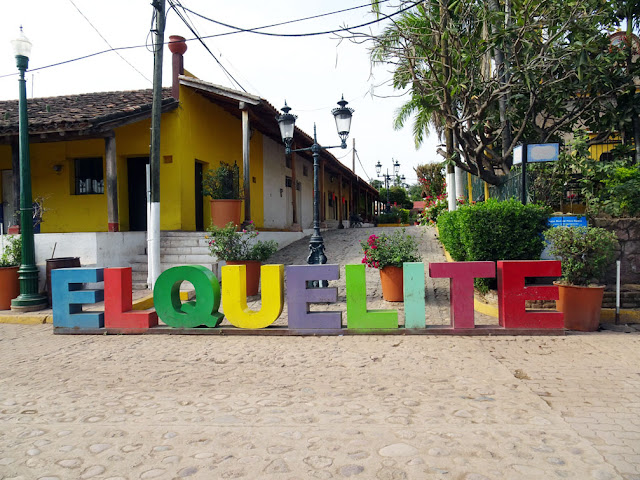 Parts of this building get painted about every three years. At one time it was blue - see the side. Now pink and yellow. Looks like it is ready to paint again. The storms last fall were really hard on a lot of the buildings. 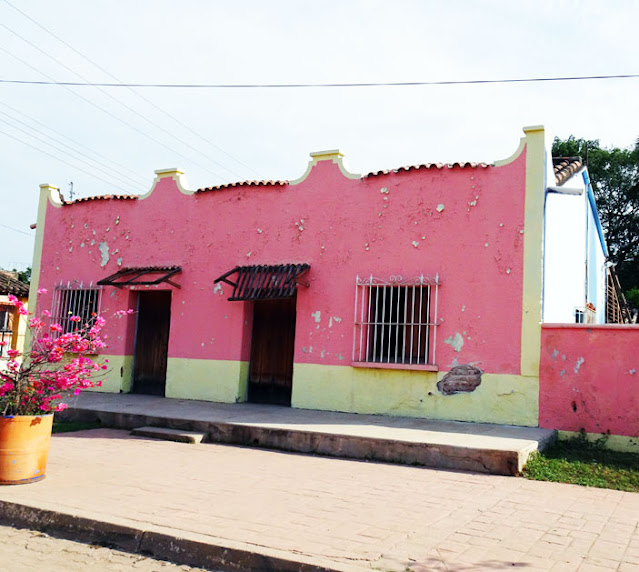 No idea what he is carrying, but he was in a hurry where ever he was going. 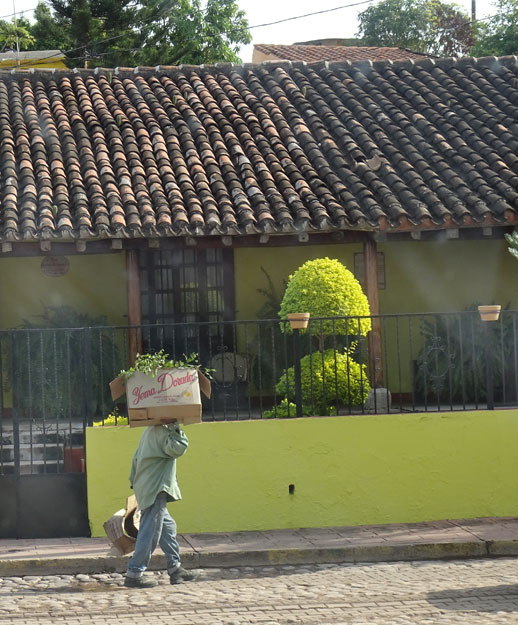 Just liked all the different colors here. And all the plants on the roof. Notice the horse? 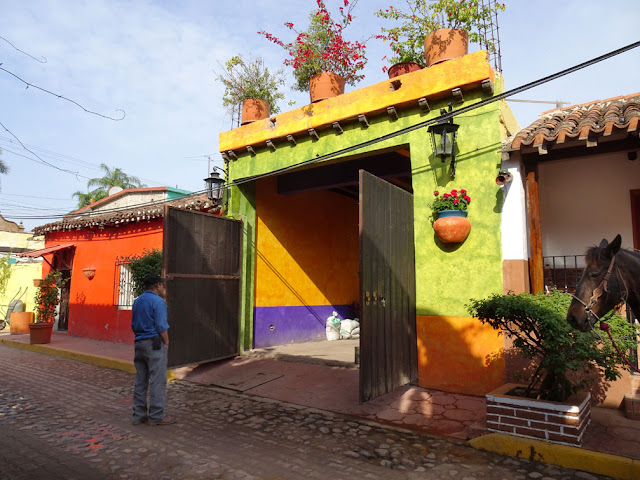 Walked over by the church. There have been some new additions since it was painted. Never saw these boys sitting on the drain spouts before. I find it kind of creepy on a church. 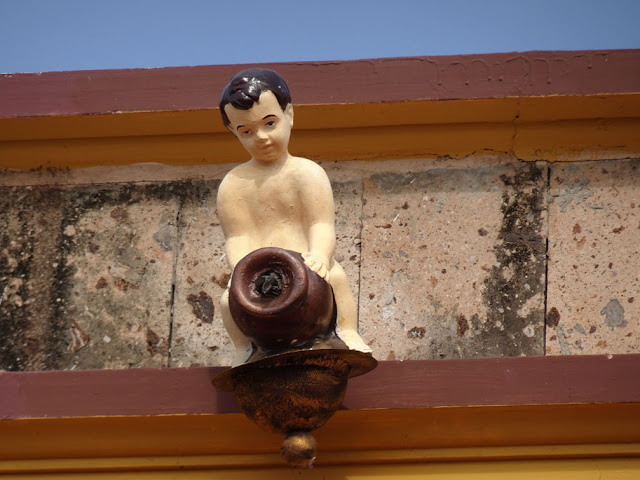 This church window has a lot of detail in it almost looks three dimensional. Especially the stairs. 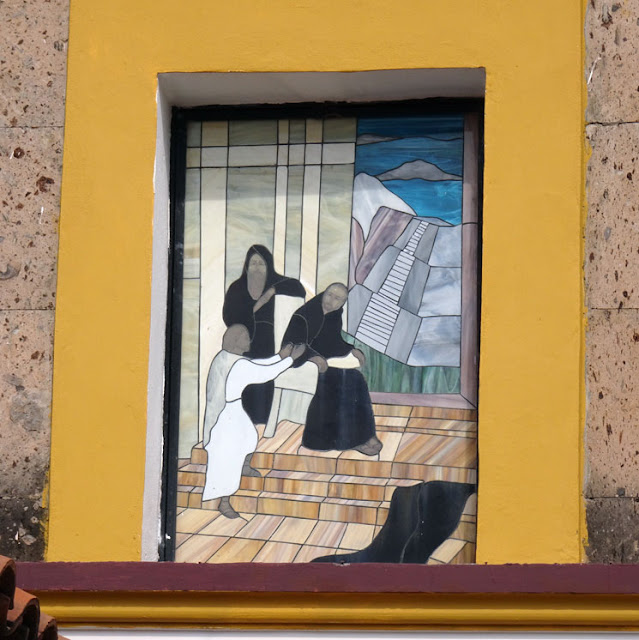 The gazebo in the plaza. It used to have a library in it. Had lots of books and a caretaker. Looks closed now. 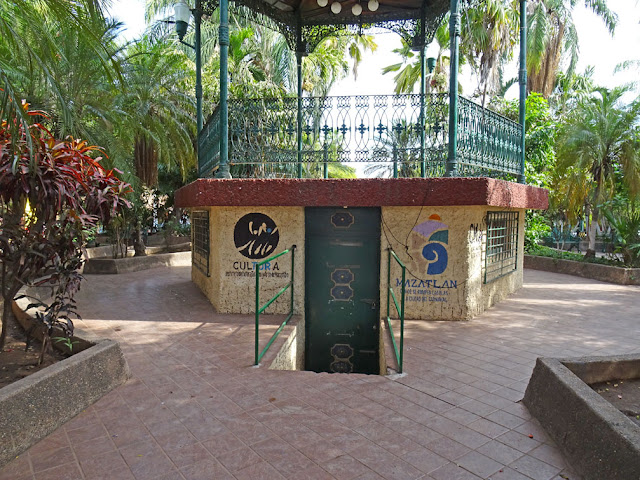 In 1864 the French invaded and captured Mazatlan. One of the major Generals of this skirmish lived in El Quelite. Will keep trying to learn more. (Just a tidbit of other history. In 1914 Mazatlan was the first city in Latin America to be hit by an aerial bomb. And the 2nd city in the world to be bombed from air. A Mexican general hired a pilot and a by plane to do it. The bomb was supposed to hit a military installation but hit in the middle of Mazatlan instead killing two people.) 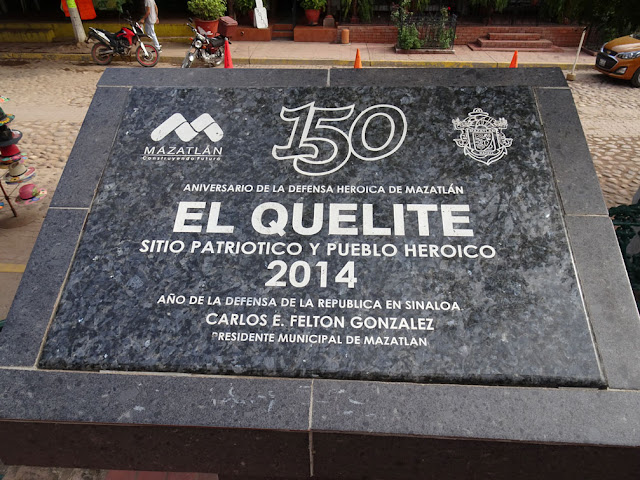 I can see this two story building from the plaza but can't figure out where it is. Has to be on the street behind - will try to remember to look next time. 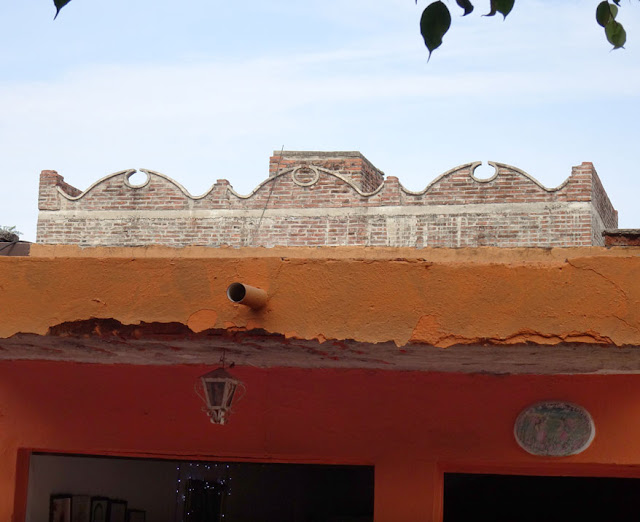 A little store on the corner of the plaza. 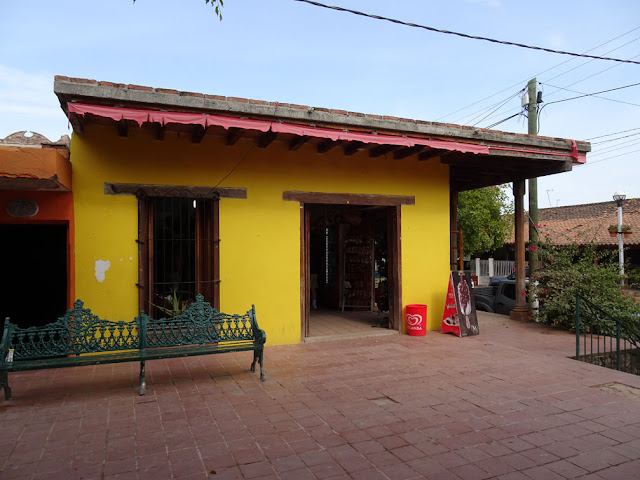 Lots of shoes for sale inside of it. Now it seems to be more of a snack store than the leather shoe store it was years ago. 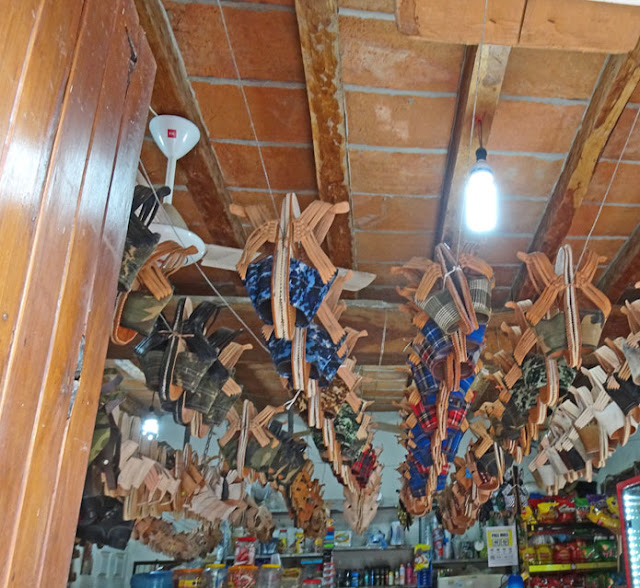 Seems like almost every home on the main street is selling something. Raspados are almost like a snow cone. Slivers of ice are shaved off a big block of ice, put into a paper cone then fruit juice with pieces of fresh fruit is poured over it. 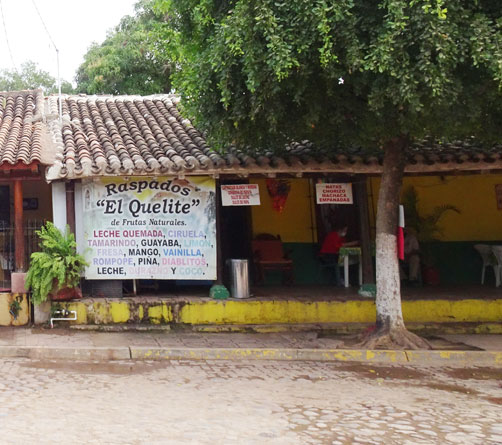 This place is selling cheese, cooked meat and sausage among other things. 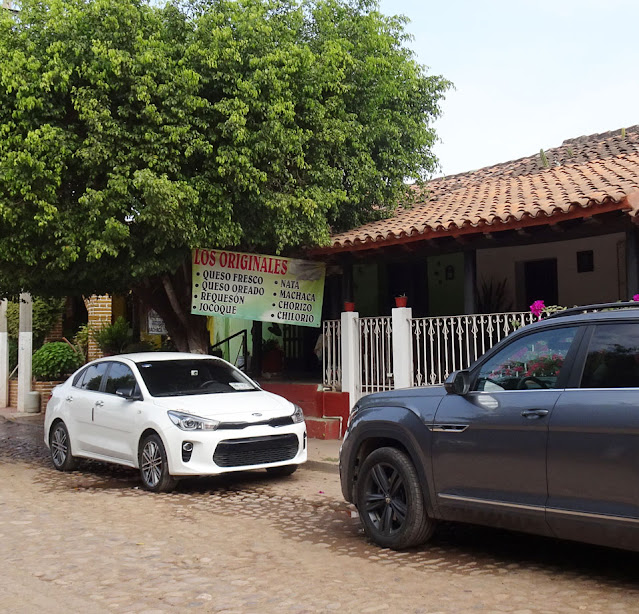 One of many cacti growing out of many roofs here. 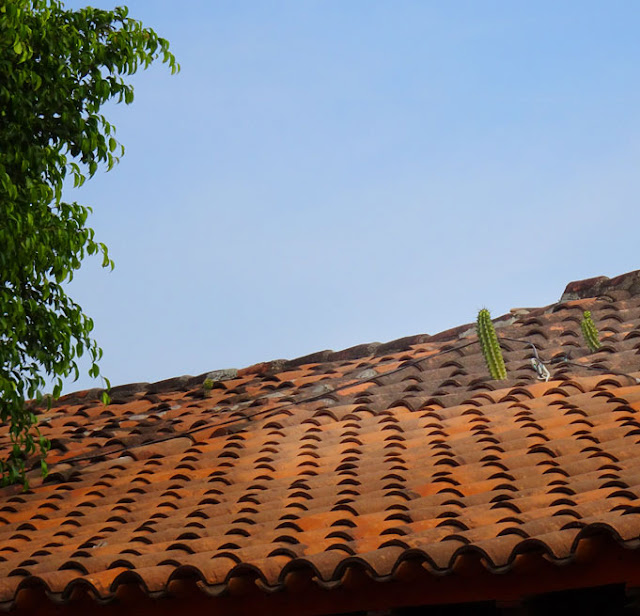 Another home with some thing to sell. These are gorditas, very good. they can be eaten plain or the fat ones can be cut open and stuffed with all kinds of things. From jelly to meats. Notice it is mostly food of some kind. 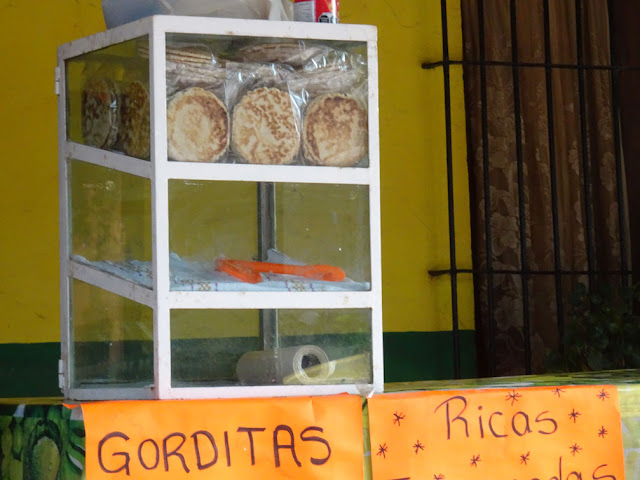 Just a couple of the pretty roses growing here. 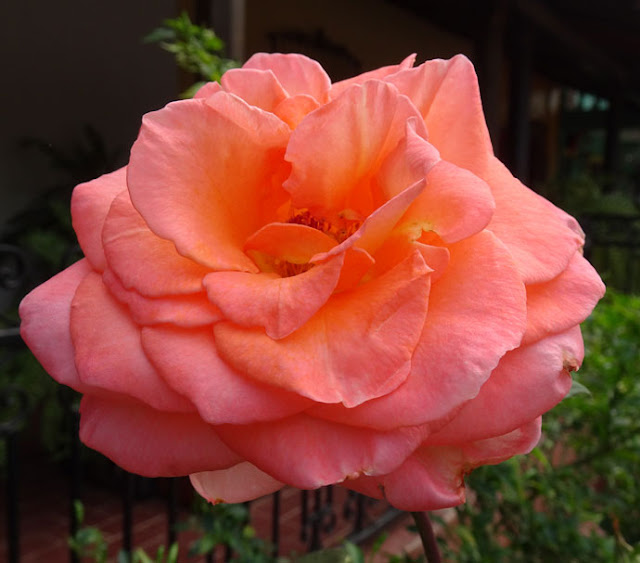 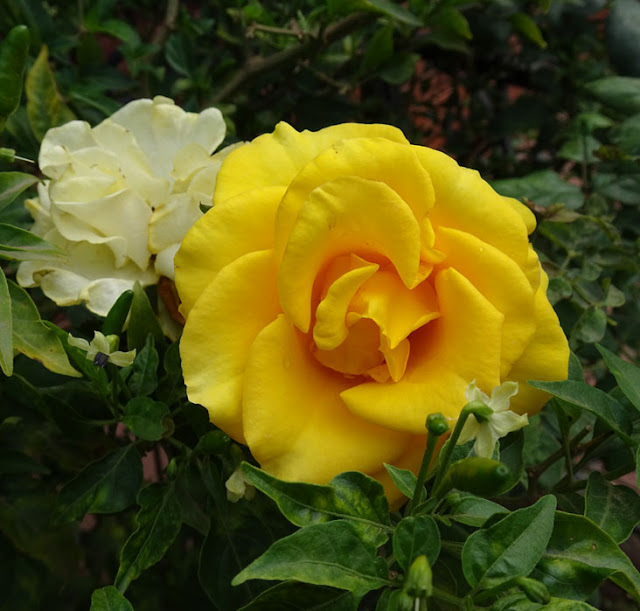 So colorful. The sun had just barely come out. 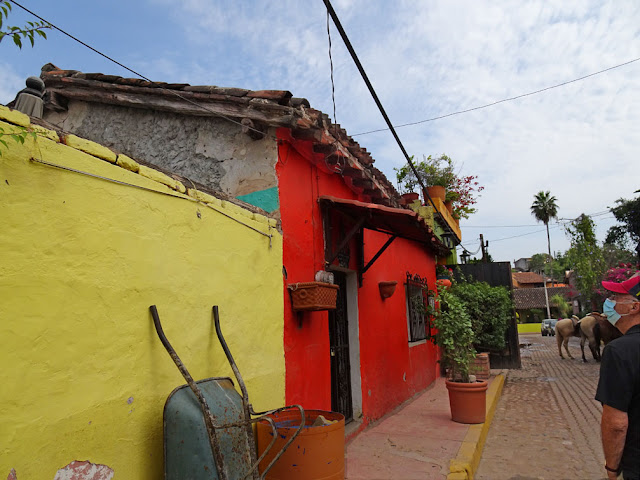 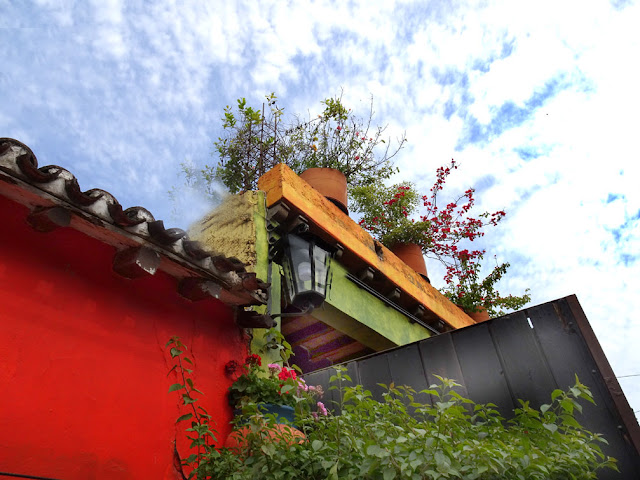 A pretty blue home with lots of plants. 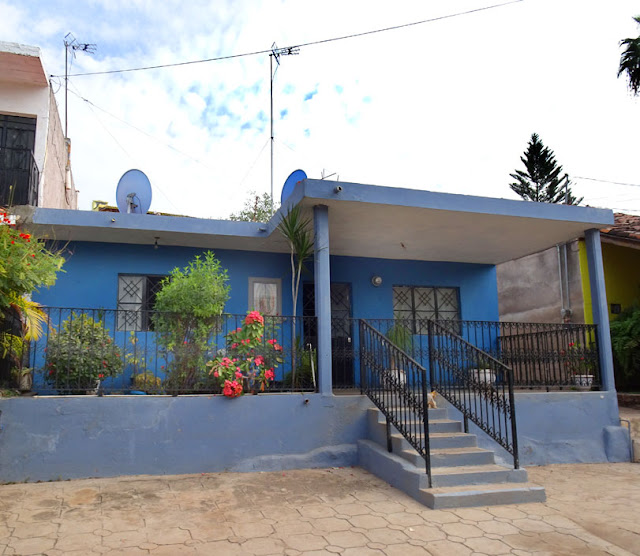 Colorful fence around patio. The left side of patio has an iron fence. I like this side better. Intricate gate too. 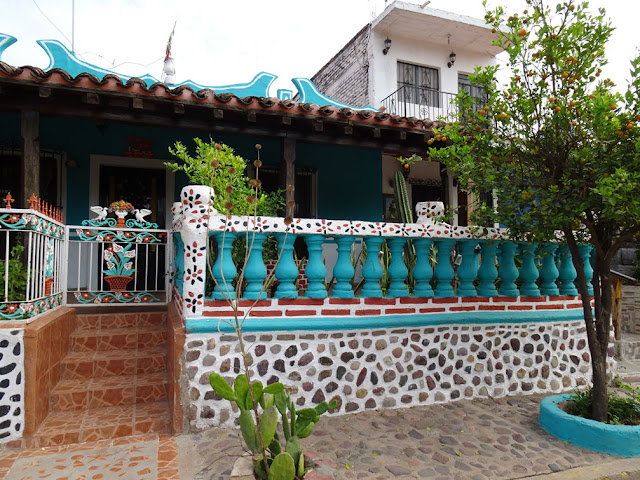 Growing corn on the front porch. 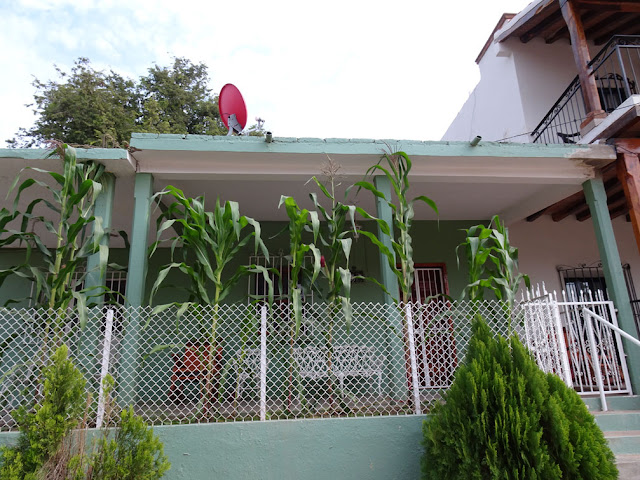 I'm glad all these cacti made it through the storms. 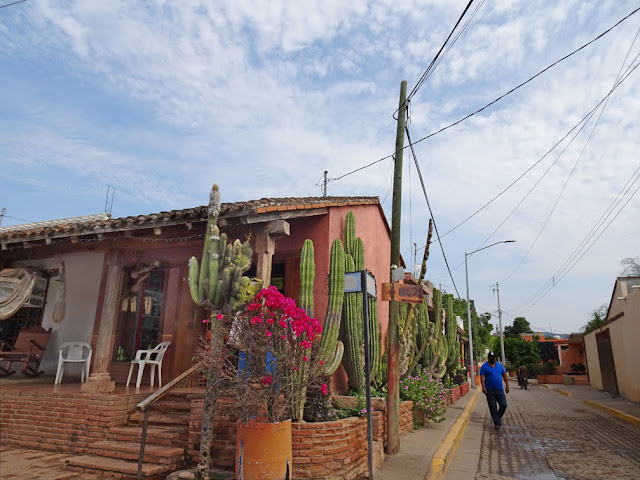 Looks like part of their roof needs to be repaired. 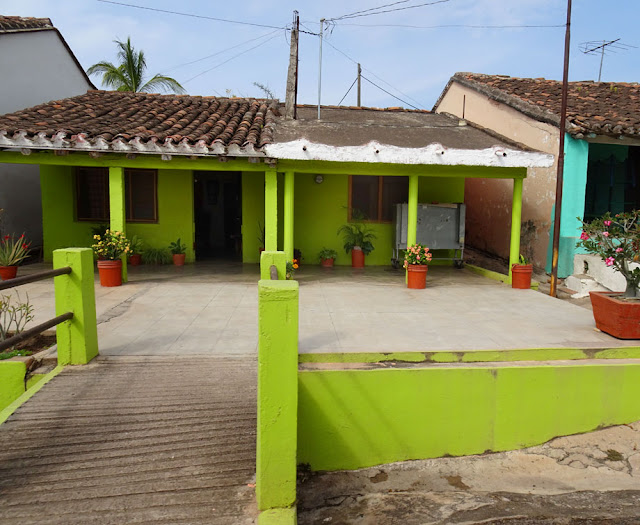 Leaving El Quelite, until another time. 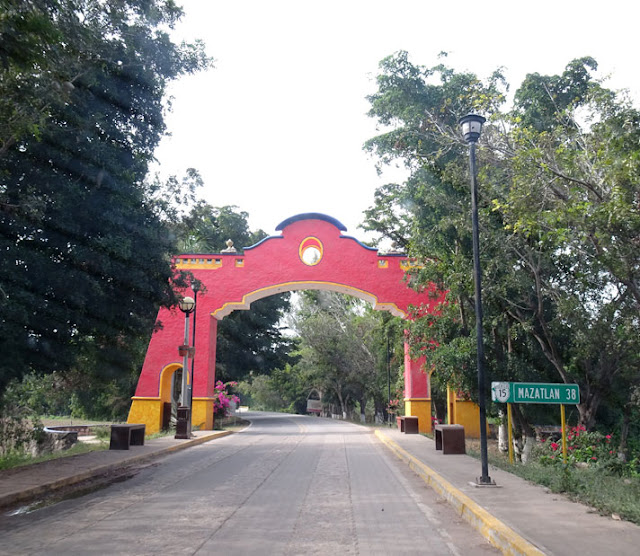 Hope you enjoyed.
Posted by Carol and Bill at 12:07 PM

Thanks it is such a colorful town..love the roses😊