Last Saturday we took a quick trip to La Noria to buy tortillas! That was the main reason, other reason, to get out of the RV! and it was a nice day.

La Noria was founded in 1565 when mining began in the area. Some of the mines are still active. The town is quite small only 725 people live there - 2020 count.

On the way there we stopped at La Martina for breakfast. Forgot to take any pictures there. Oh well. So on up the road. The arch of La Noria. See the yellow stripes in front of the arch. They are speed bumps. On the other side of the arch there are yellow stripes too, but they are just painted stripes, no bumps. But you still slow down. 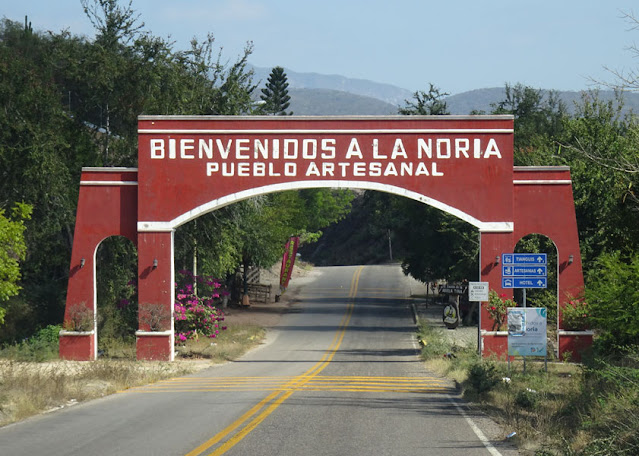 In the past year several little stores have opened. If you have a front room you are not using, make it into a store. I don't remember seeing this one before. 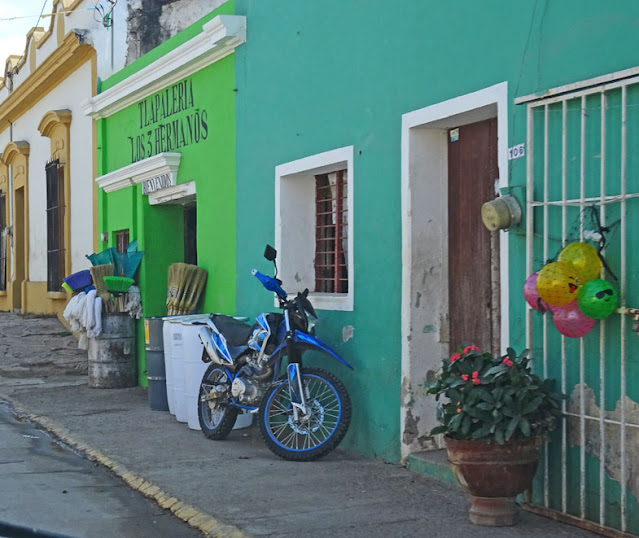 Shoes and hats for the tourists, cleaning supplies for the locals. 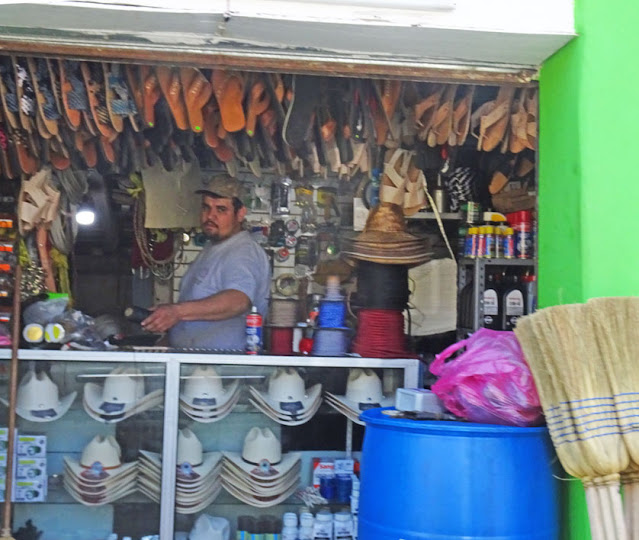 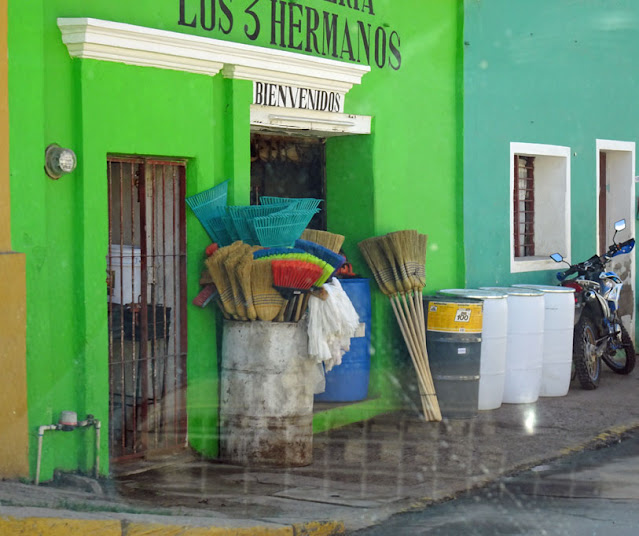 A little food stand in the center of town. They sell birria tacos and birria to go in different amounts. It is a traditionally sweet, sour, slighty spicy Mexican beef stew. It can be eaten as is or put into a taco. Smelled good. 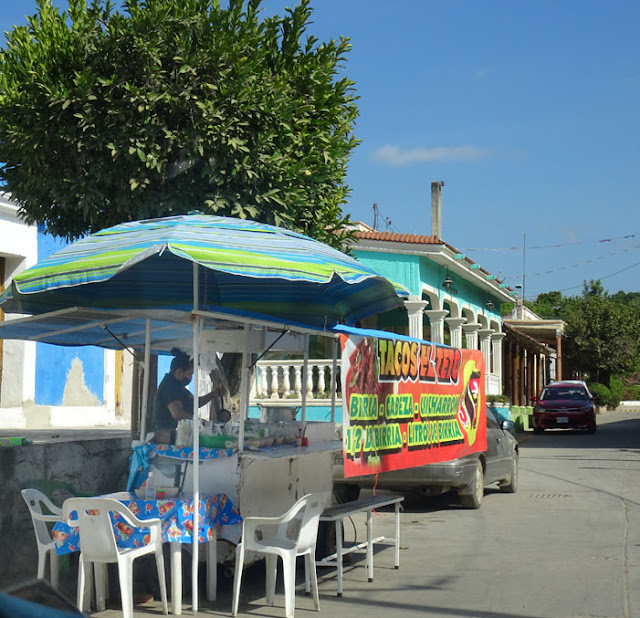 The restaurant and hotel that opened last year. The older man and his horse are almost always around town. 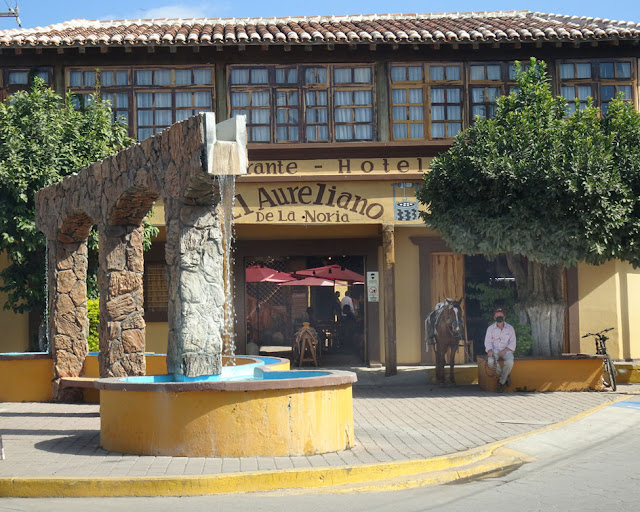 New signage in the plaza.

Christmas decoration still up in the plaza. I think this building has been repainted since last year. 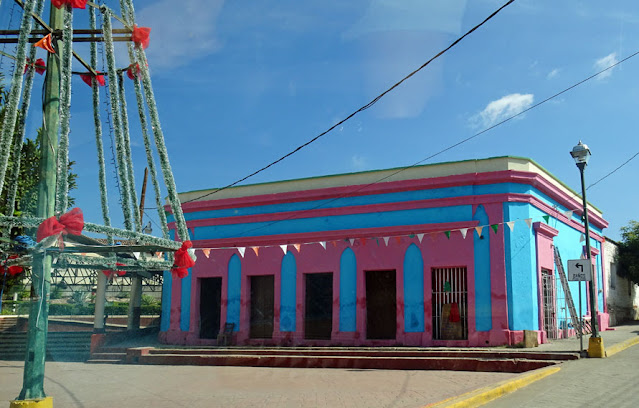 Just one of the pretty homes there. Most are colorfully painted. 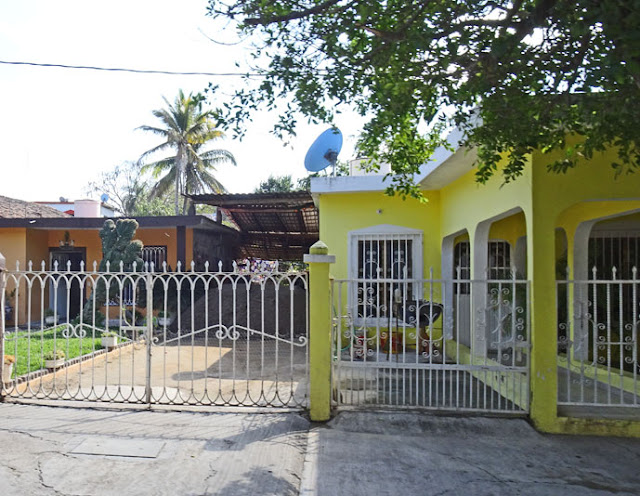 One if the historical buildings in town. 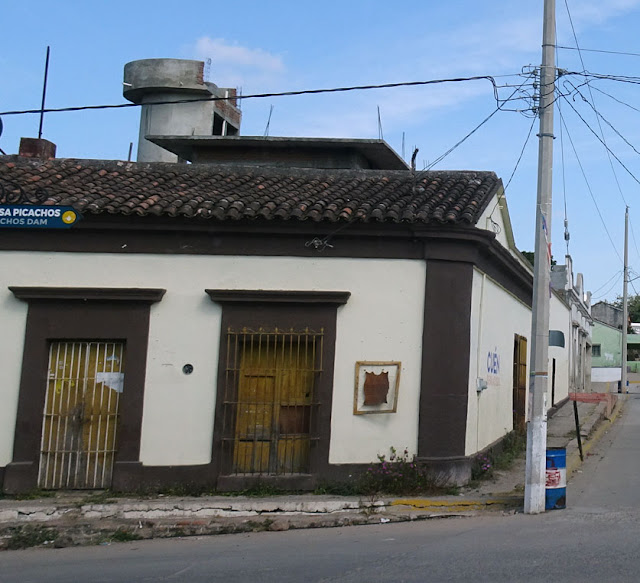 Nelson Home  Guillermo Nelson lived there. He was called "El Gringo" Cannot find any info on him on web. He either ran for or became the governor of Sinaloa. I do know there is a street in Mazatlan named for him. The bakery with the delicious cinnamon rolls is on that street. 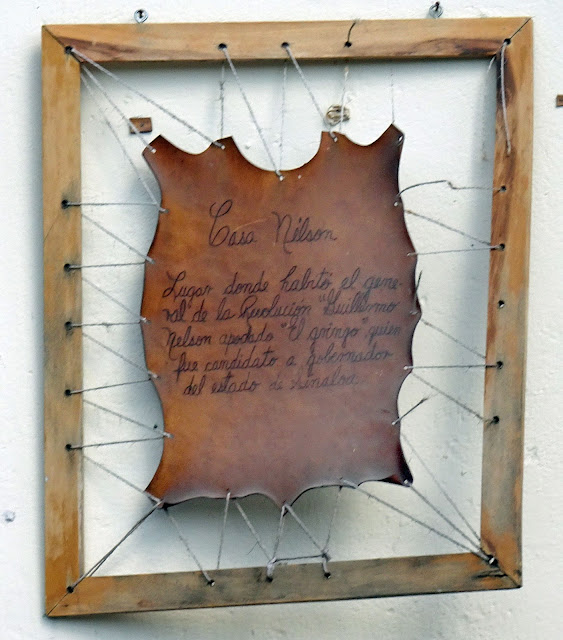 Lots of great architecture and big beautiful plants here. Had to get good pictures sometimes because of all the wires every where. I did read that 100% of the homes here do have electricity. 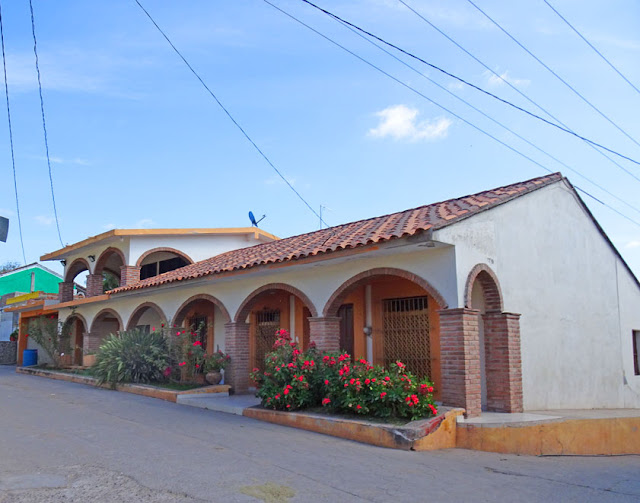 Stopped at the Tortilleria to buy tortillas - what else. Bill and Rafa here in the campground says they are the best they have ever tasted. 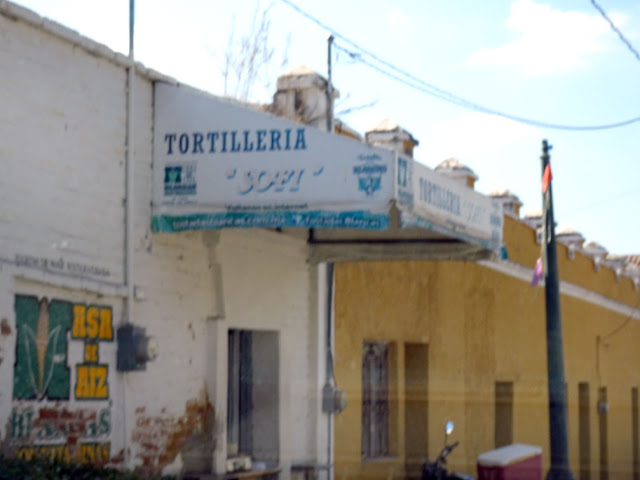 Tried but couldn't get a really good picture of the inside. 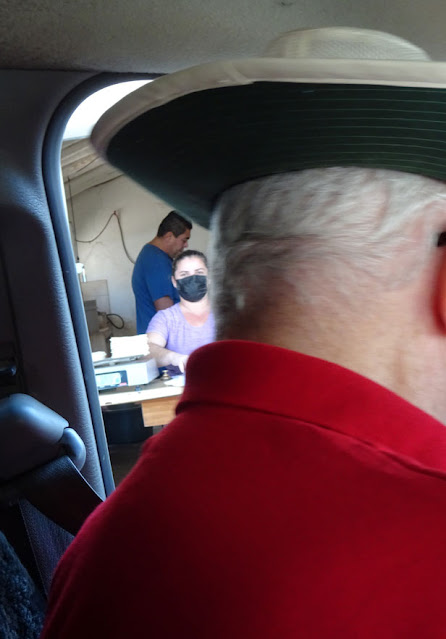 Another building and it plants. 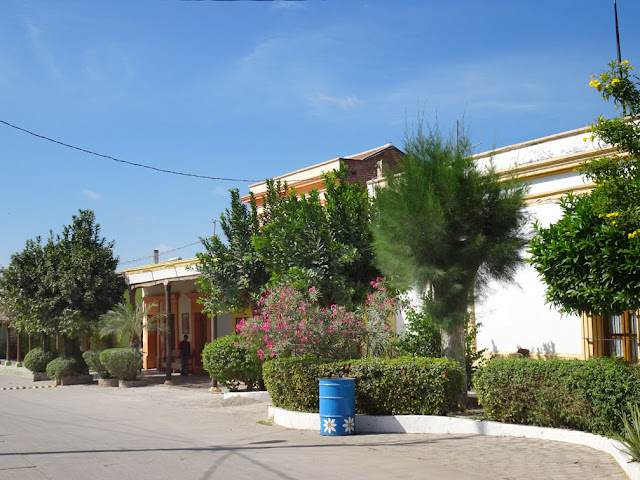 Have chain saw will travel. 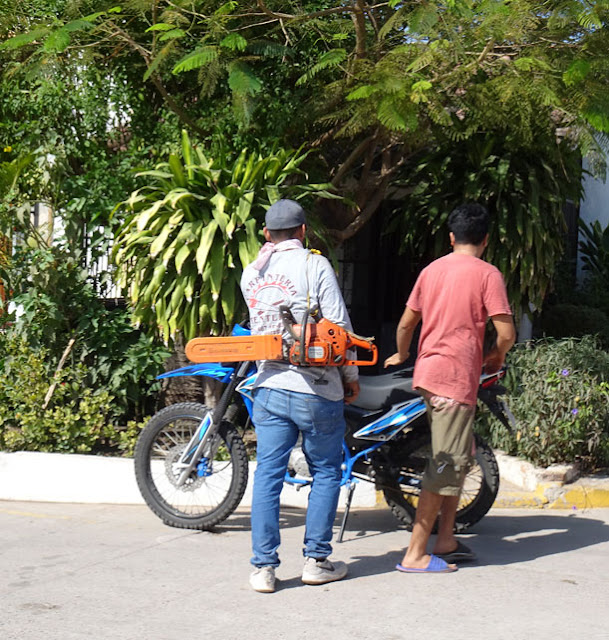 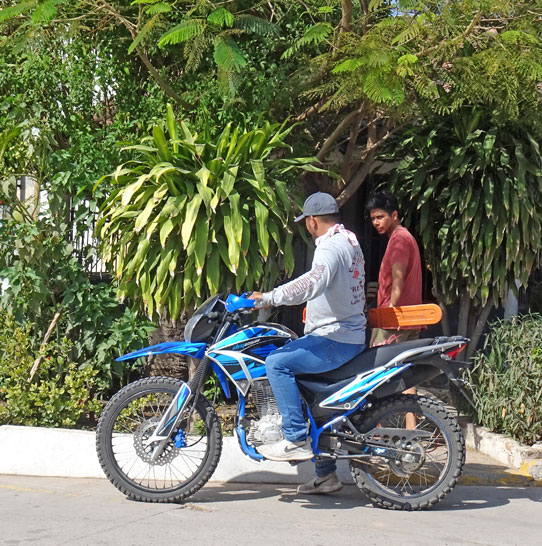 This building is actually partly a warehouse for grains etc. 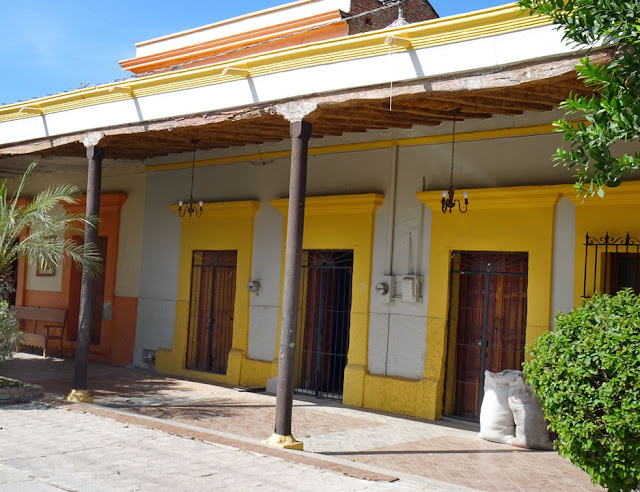 A little one room grocery store. It is the front room of a home. She sells everything from beans to dish soap. Drinks and candy. Also historical, but can't read the sign. 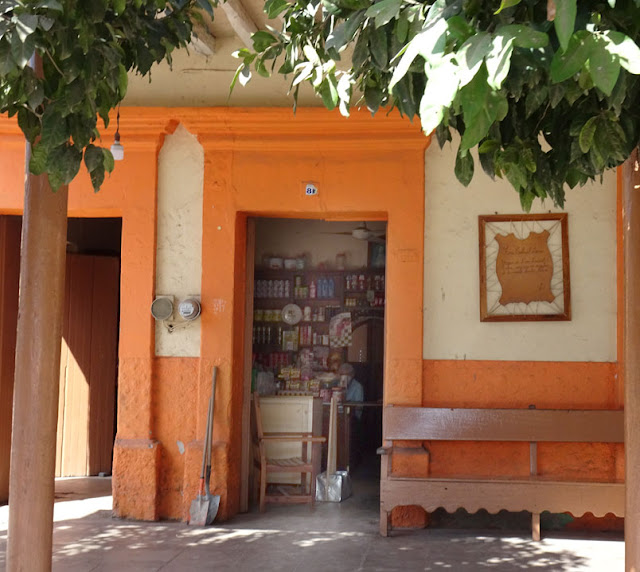 He is braiding leather strips into a rope? Halter? Don't know. 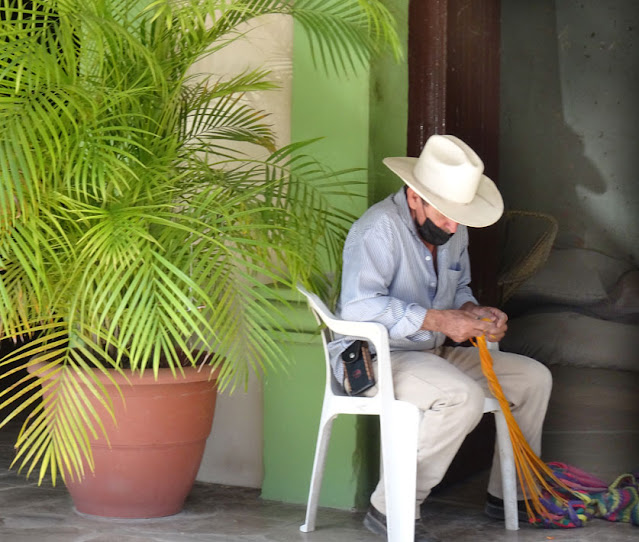 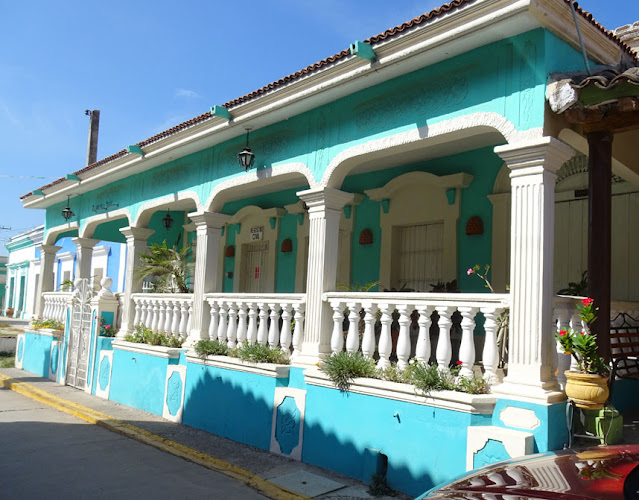 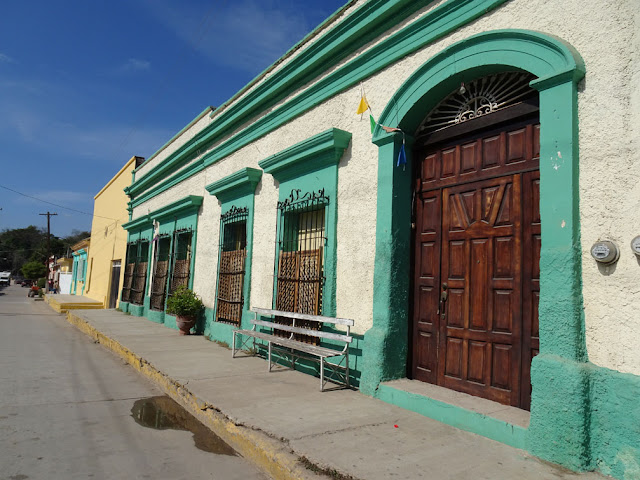 Notice how high the sidewalks are. Keeps out flooding during storms. 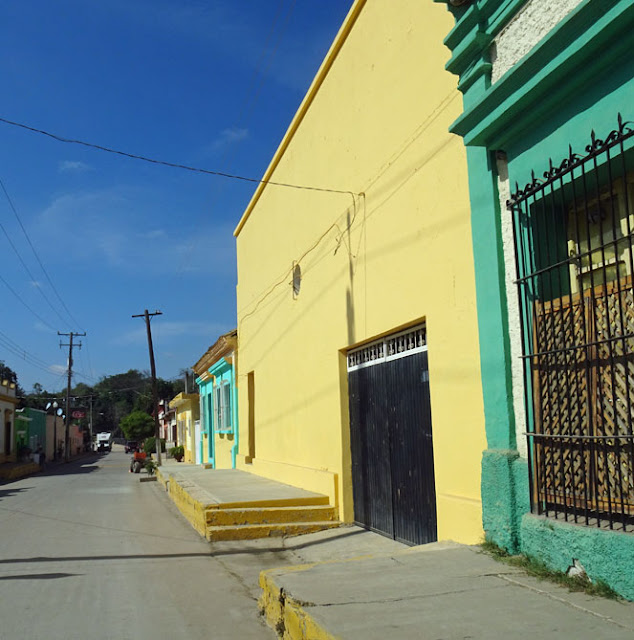 This is the blacksmith. He came out to talk to Bill when he saw the car. Know him for years. 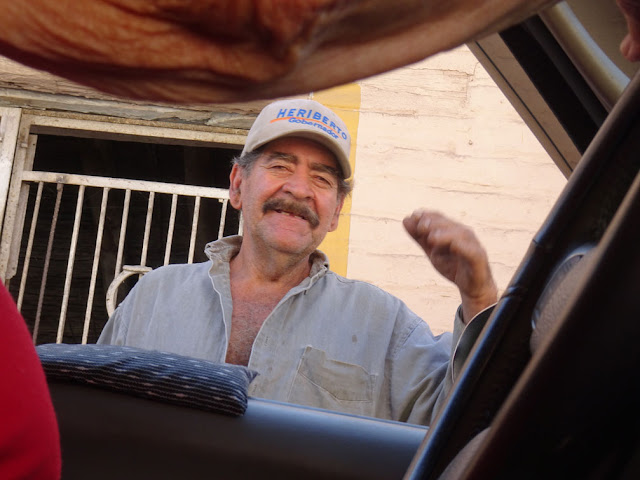 I just read this on line the other day. Wish I'd known it when we were there. Would like to check it out.
"The Mexican donkey, an animal that has been used for years as a means of transportation or a beast of burden, unfortunately, today joins the list of endangered animals. Given this, in the community of La Noria, Mazatlán, the first donkey reserve was created in Sinaloa, where they seek to conserve the species. The promoter of rural tourism in La Noria, Roberto Osuna Valdez, explained that in this community there are 60 hectares to conserve the donkey, where up to 200 species can live."
Leaving town. A new housing development going up on the road. They are clearing the land now. 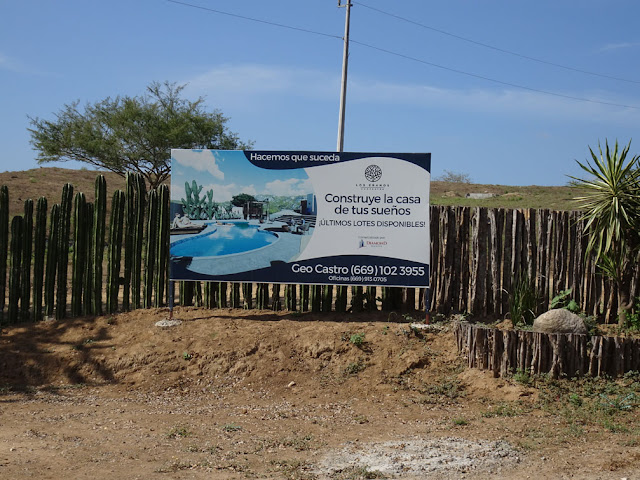 Already have the entrance arches built. 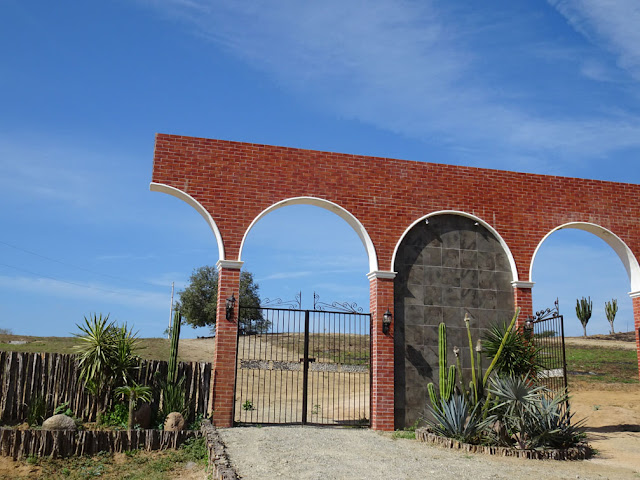 For the last few days we haven't done anything but go to the pharmacy and buy some KN95 masks. They are easier to breath through and supposed to be better than the cloth ones we have.  Weather has been cloudy, windy and cool.
Posted by Carol and Bill at 8:16 AM