After a couple of days of not doing anything we took a short trip into Centro to eat at a specific restaurant and check on THE watch.

Sometimes I see something when we are driving and I snap a picture of it. When I get to look at that days pictures I wonder why I took the picture - what was there that I wanted a picture of. This one I had no idea until blew it up. This vendor caught my attention. With the mask, sun glasses and hats he tickled my fancy. Sorry about the dirty window. Doesn't look dirty until I see a picture taken through it. 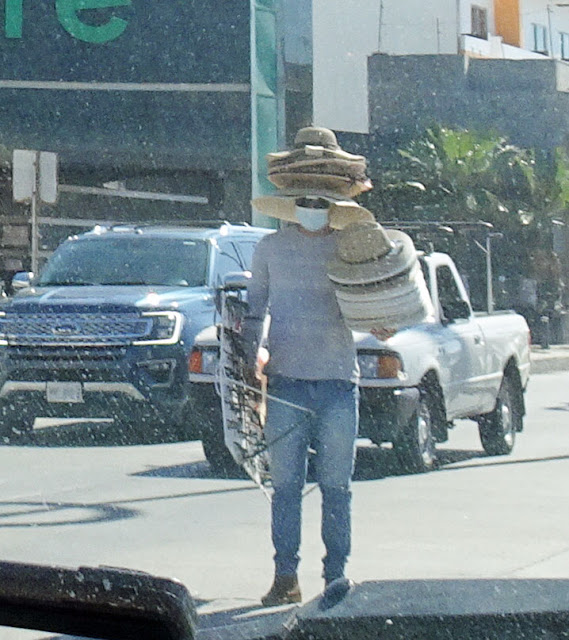 Along the Malecon there is no place to park. Except for the pull overs for busses. As we drove along we passed two cement trucks in one of the pull overs. Then we saw the guy with a wheel barrow full of cement walking along. See the three guys in front of him. That is where he is going. 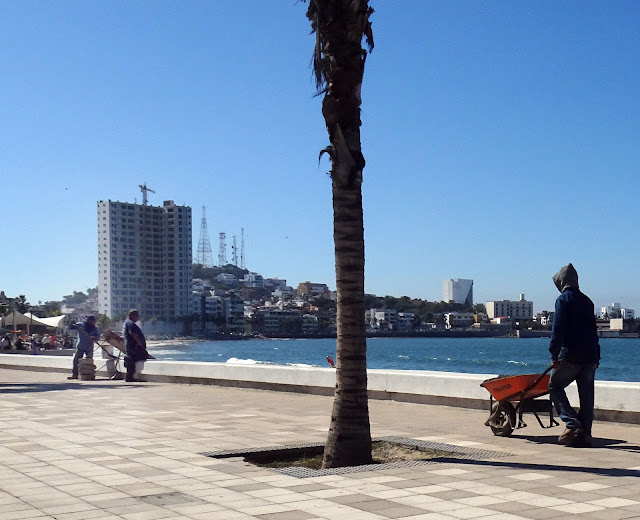 See the yellow pipe it goes down to the beach. No idea what happens down there. 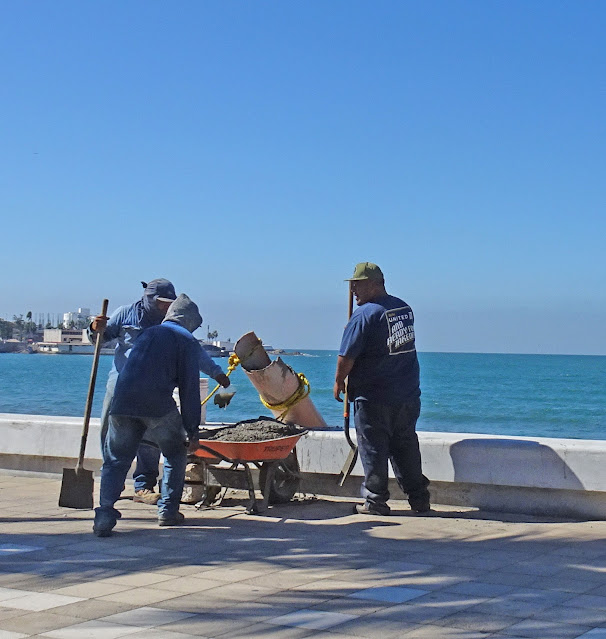 They were shoveling the wet cement into the pipe where it flowed down. 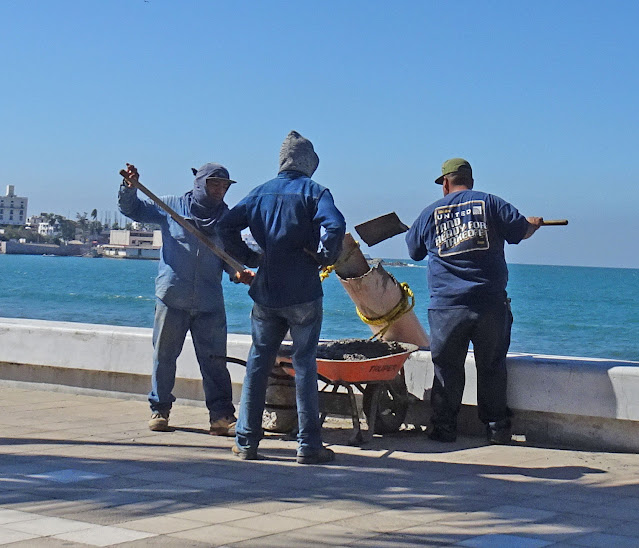 They saw me taking pictures. Probably though "weird gringo," When cement was all gone he took wheel barrow back to trucks and it all began again. (we were stopped at a traffic light - good timing) 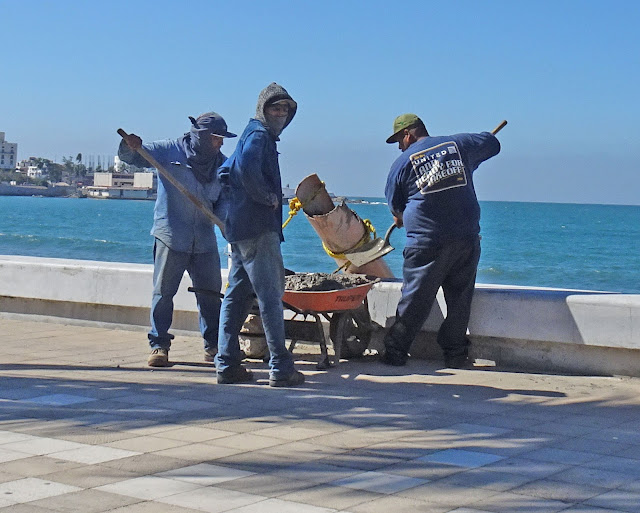 No idea what this is going to be. Outdoor dining maybe, entertainment stage? Hope they finish it before we leave. 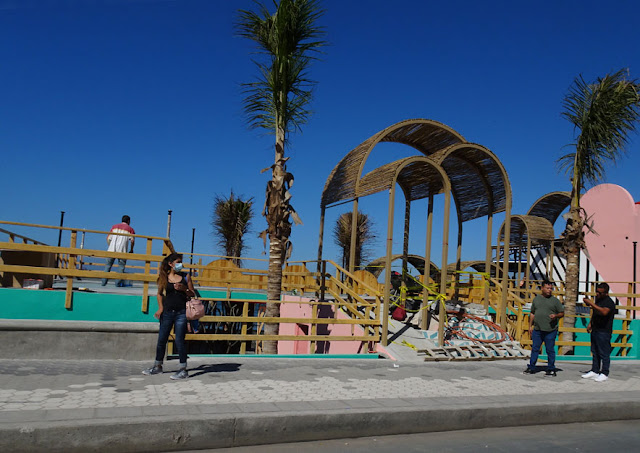 Continuing wonderment about the two orange barrels in the middle of the street. No policeman here this time. (When we came home both barrels and policeman were gone.) They have been here in the morning for weeks. 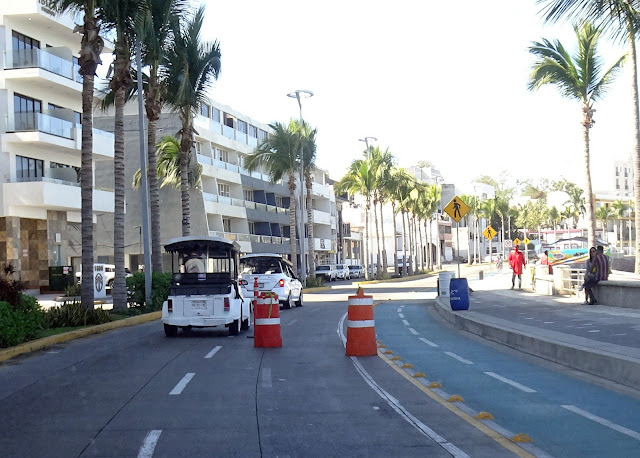 Lots and lots of umbrellas along this stretch of beach. I think most of them were vendors. Or one restaurant vendor. colorful. Rather cold wind was blowing. 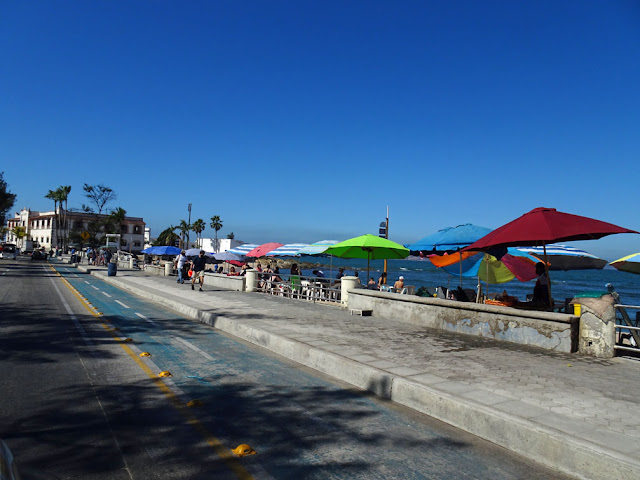 Parked the car and walked up the street. These trees are so pretty with their orchid like blooms. 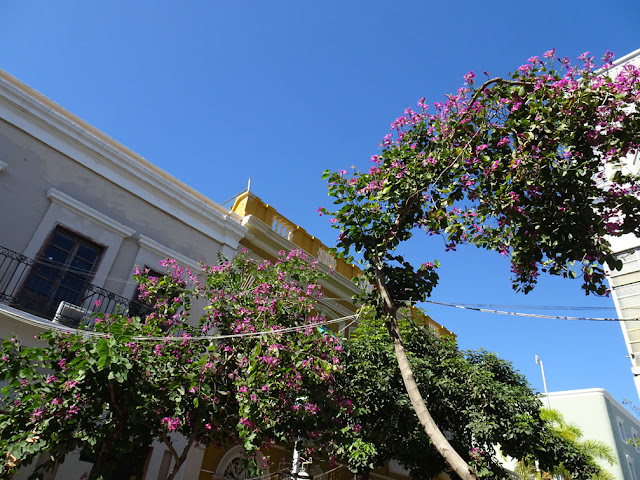 They don't build them like this any more. Now this is a bank building. 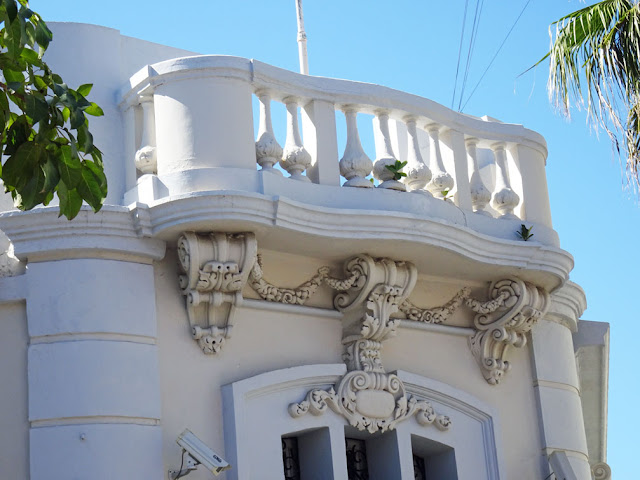 Got to be careful walking along the sidewalks. Have to look down and up. These wires are exactly at my face level. Not paying attention, bet it would hurt. 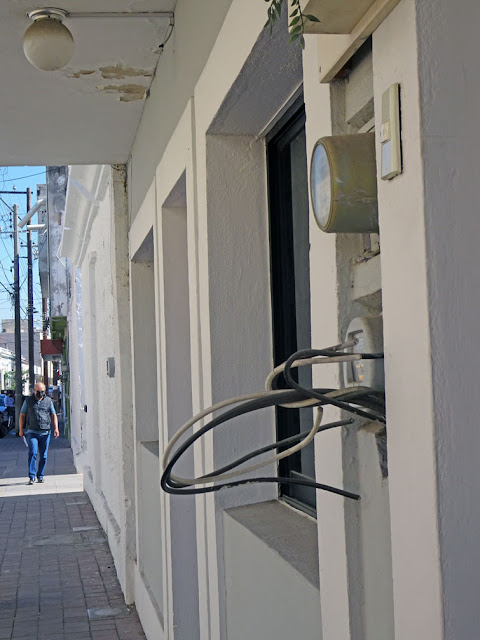 And the saga of the watch continues. At first we thought the sign on door probably said closed. Then took another look, nope says open. Bill tried know, not open. Knocked on window, no one came. Just as we turned to leave watchmaker came out of his home. He lives in the orange section of the building. 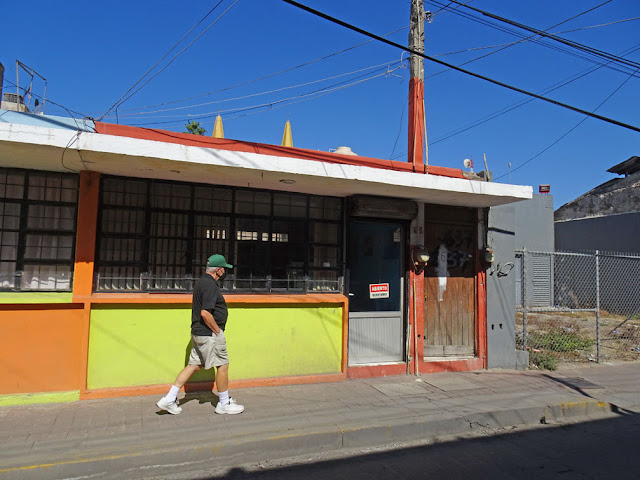 Discussing what to do. Piece he made did not work. So new idea. He has an old watch with a good movement. Will take it out of old watch and put it in Bills watch. It should/might work. Come back next week. 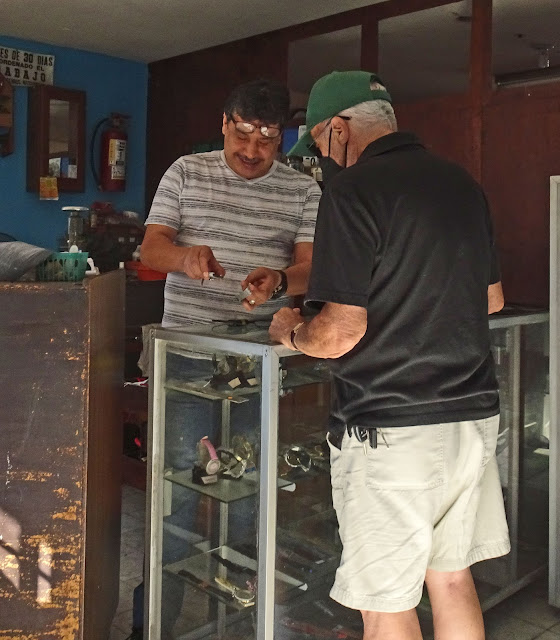 Continuing on to restaurant for breakfast. The last time we ate there Bill breakfast did not turn out well. We pass this re4staurant quite a bit and the waiter stopped us one day and told us there old cook, the good one had come back to work. Come try eating there again. Okay. yesterday was the day. 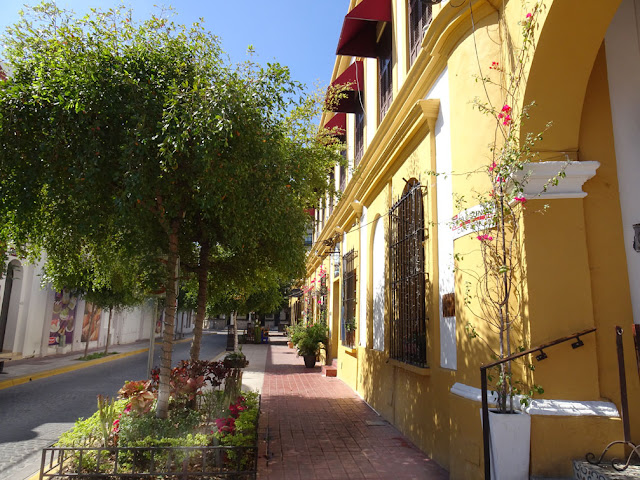 A neat bench we passed on the way. It is outside of a shop that has amazing things for sale. Lots of Latin American art and clothing. Some of the clothing is hand embroidered. 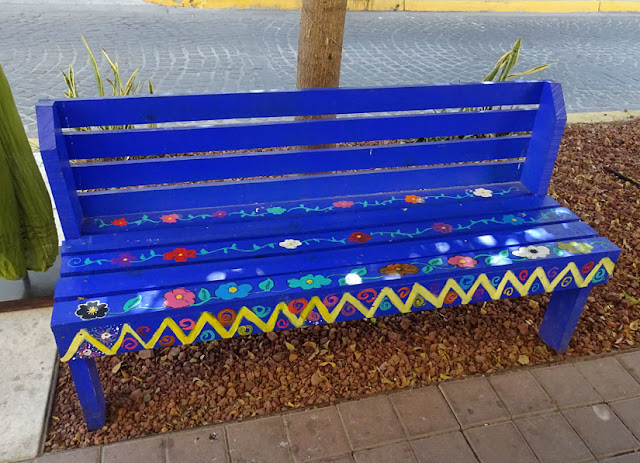 Waiting for our breakfast. Bill ordered a Spanish frittata. Sorry to say even with old cook back it was not good. Every one very apologetic, understood. When we were leaving they did say, "At least stop by to say Hi once in a while." We will, very nice people there. In the past before Covid ate there a lot. 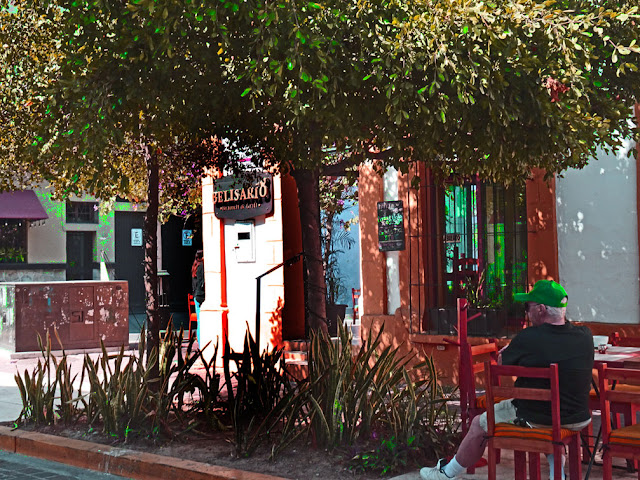 This could stand either a decent burial or lots of TLC. They flowers used to be so pretty. 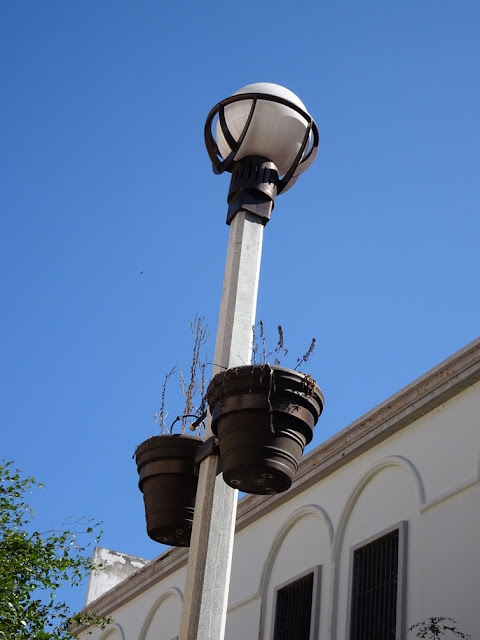 Going to stop here and continue this tomorrow 'cause I don't think we'll be doing too much today. I'm on antibiotics that aren't agreeing with me. Nothing serious. Actually the rest of the day was quite interesting - involved Bill and dancing.
Posted by Carol and Bill at 12:32 PM

Thought it was snow in the first photo!

Hello! Lovely photos! I am Contessa's sister, in Edmonton Alberta Canada! It is currently-18, feels like -22! It's was -28 this am ! So I am very grateful to occasionally pop on your page and read, relax and soak in the amazing photos! I have never been to Mexico so thankful. You do a fantastic job!!!

Oh, my name is Denisedropko

Hi Denise, glad you drop in when you can. I enjoy posting about what we are doing and seeing. Thank you so much for your comment.