Another day around town.

It is the start of a beautiful day here in Mazatlan today. But I have a question. How can something as tiny as a bird make so much noise when walking on the roof of the RV. Sounds like elephants stomping around up there!

I think I got the problem with my posts to Facebook fixed. The posts were only going to my Facebook page not to every one else. Sorry. I have posted blogs every day since December 3rd. They can be seen by clicking on Older Posts at the bottom of the last blog.

When we went to Centro to get my watch fixed we walked around a bit. Well lets be truthful, from the watchmaker we HAD to go to the bakery. [Got in 5500 steps that day, need them to get rid of the pastry I'm eating.] Doing that we walked past the big plaza downtown. The Christmas decorations are up there too. But there is so much foliage around it is hard to see them in photographs. This ornament is almost the same color as the gazebo behind it. All the metal work, gazebo, fences and benches in the Plaza are painted a kind of burnt orange. The big old trees are beautiful. 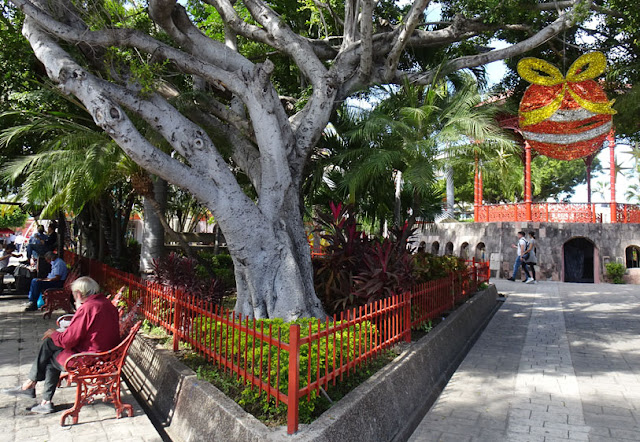 The gazebo. There used to be - a long long time ago - a restaurant under it. And the cathedral. More pretty plants. As usual everything is very clean. Most of the benches are full of older men discussing the world I guess. 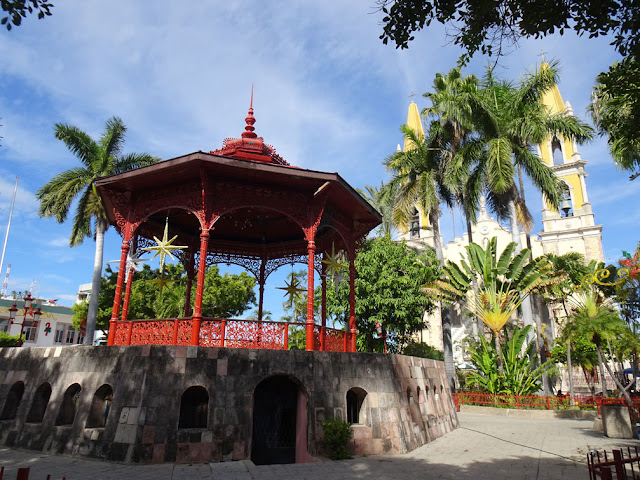 The Christmas is hiding among the trees. 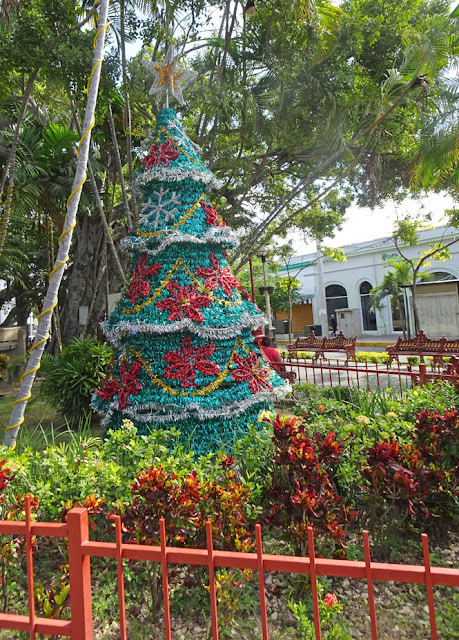 Like I said hard to see The three wise men with their gifts and their camels. 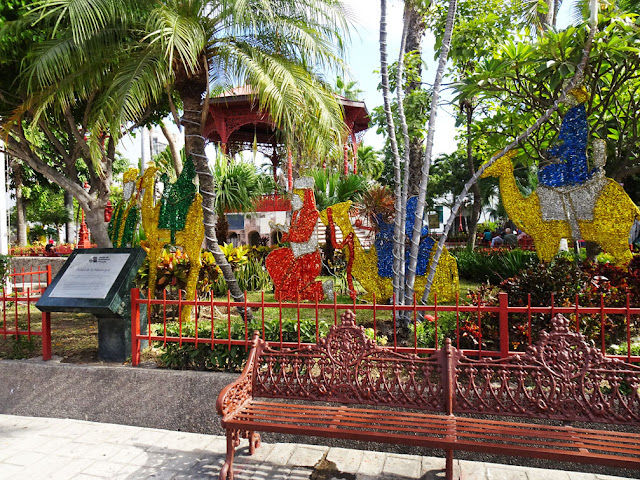 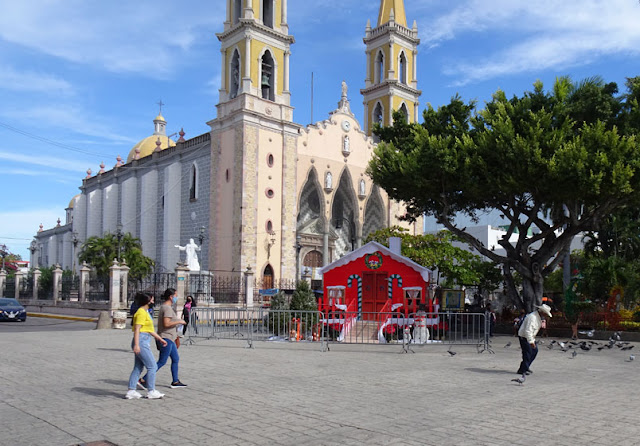 The nativity scene. I wonder if they light up at night. So far we haven't been out and about at night. The little boy in bottom left of picture was feeding the pigeons. When they all took off he chased them. 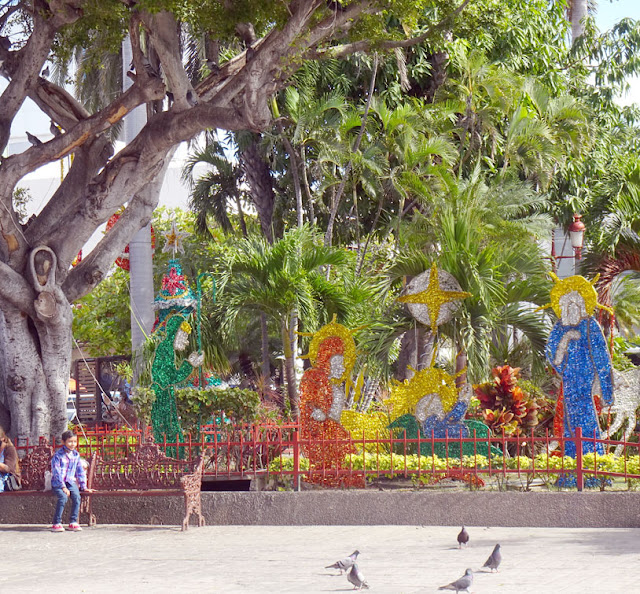 Mentioned before each house or business is painted a different color. They all share walls. Each one usually has a door and a window. 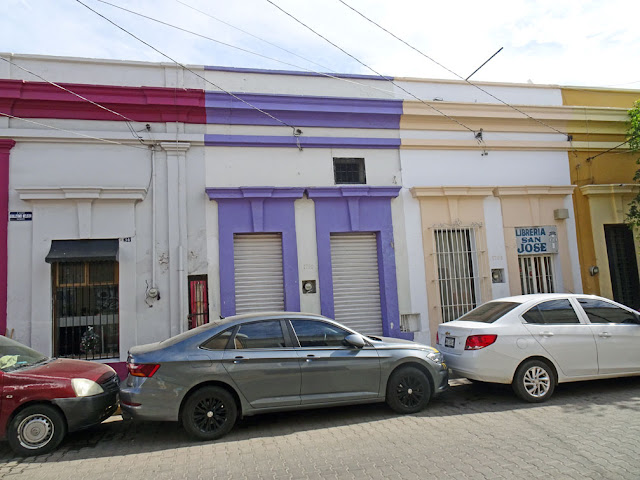 Oh my goodness, They finished painting the house The pink spot on the very top is now painted. Refer back a couple of blogs to see it with the pink still showing. About four or five years ago the home was bright Yellow, then painted bright Mexico pink now a subdued goldish tone. 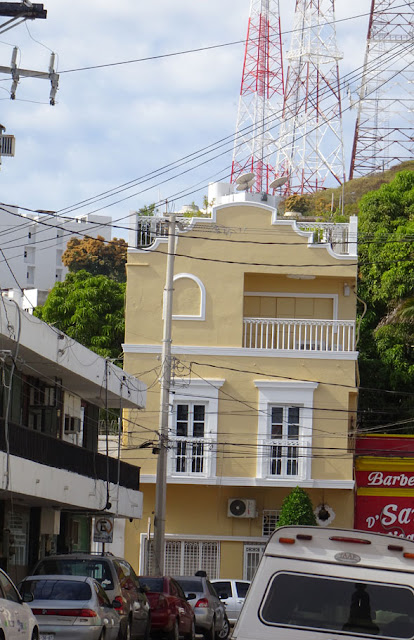 Got to the bakery. It is growing in personnel and equipment. The black two door oven fs new since last spring. Many years ago I worked in a large school cafeteria and there was an oven like that/ The pastry cook used it. Puts out a great product. Got crescents and cinnamon rolls. of course. 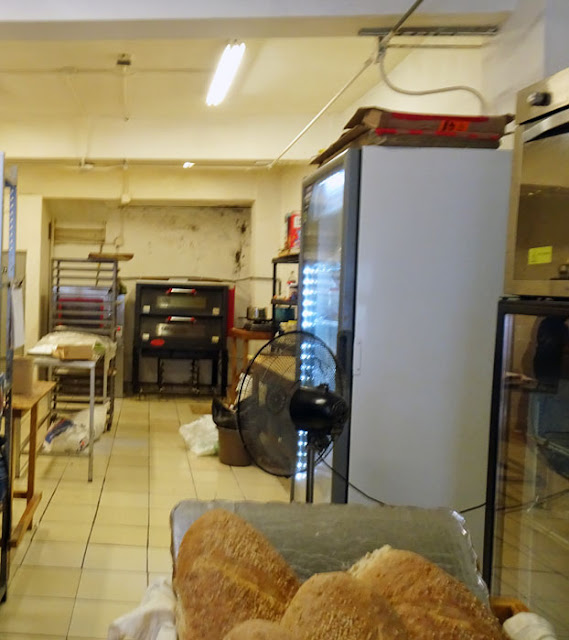 Written on the wall as you come into the bakery.  Says, "Learn to enjoy life and let yourself be loved." 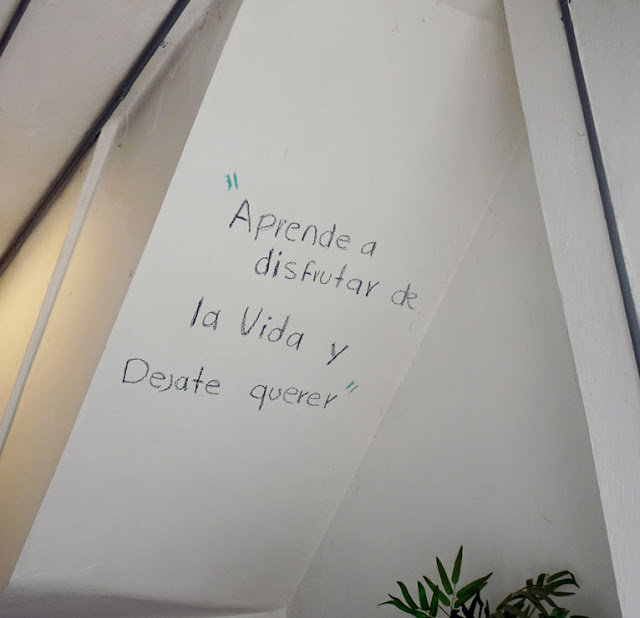 Already back in the car an heading home. Now this is a RED building. 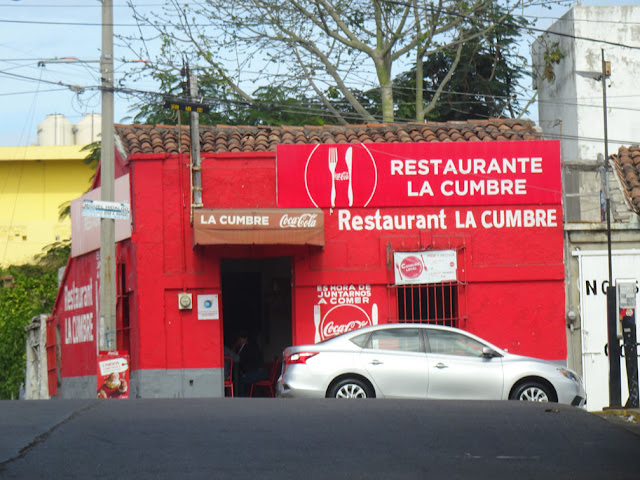 I think I missed this decoration on the Malecon the other day. So here it is. Again I think they light up at night. 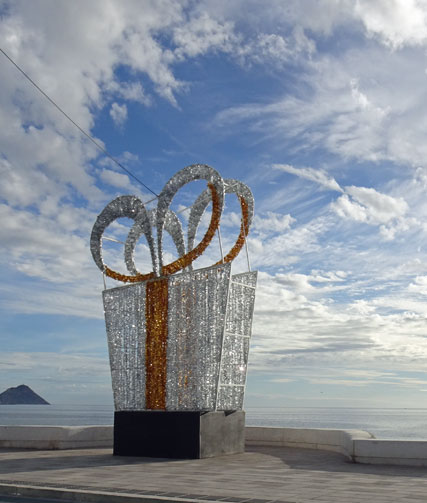 After being home for a while we decided it was such a nice day we needed to get out some more. So in the car and heading to the Look Out Point - Paseo Del Centenario - again. This is such a pretty city. Especially the drive along the long Malecon. 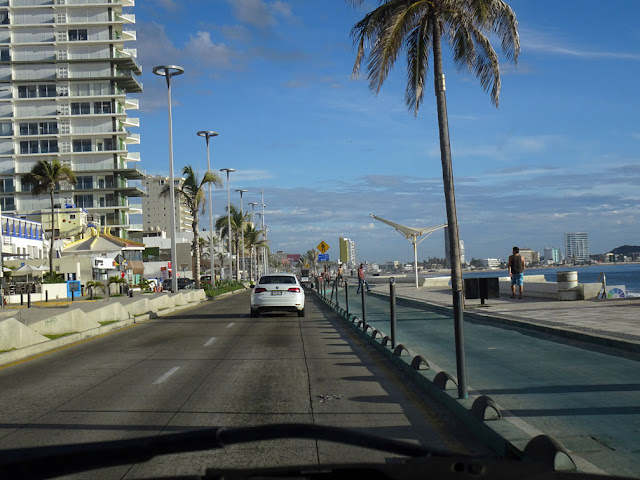 So we got parked, Bill was busy with his drone and I finally managed to focus in on the guys carrying the buckets full of cement up the hill. The one in the red pants looks about 12 years old. 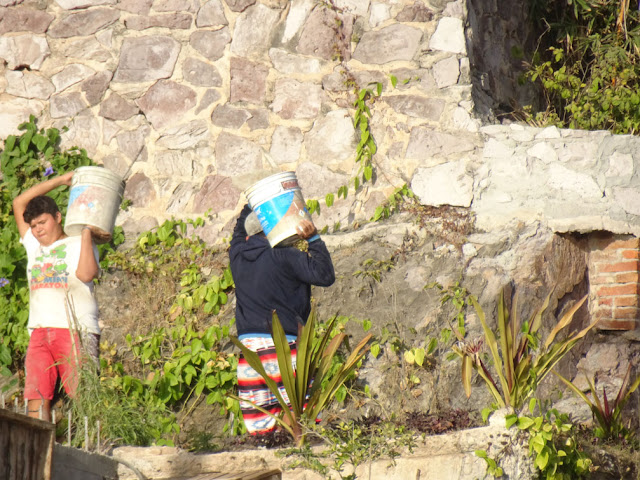 I could hear clink, clink so went looking for the sound. Discovered this worker sitting with his leg hanging over the side of a home. He was slowly but surely chipping away a wall. Clink by clink. 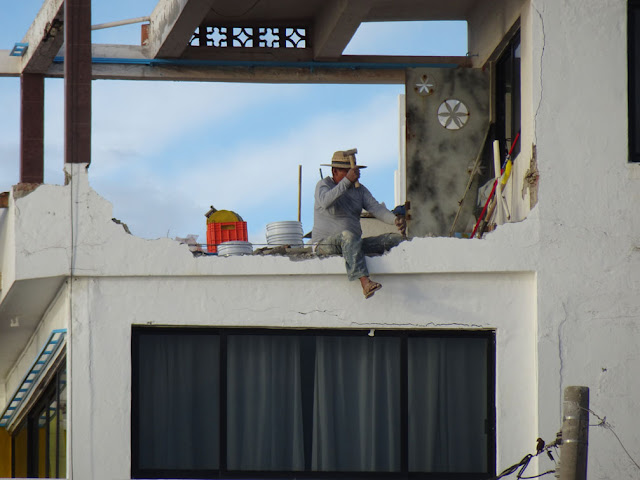 Looking toward the Golden Zone and the Malecon. 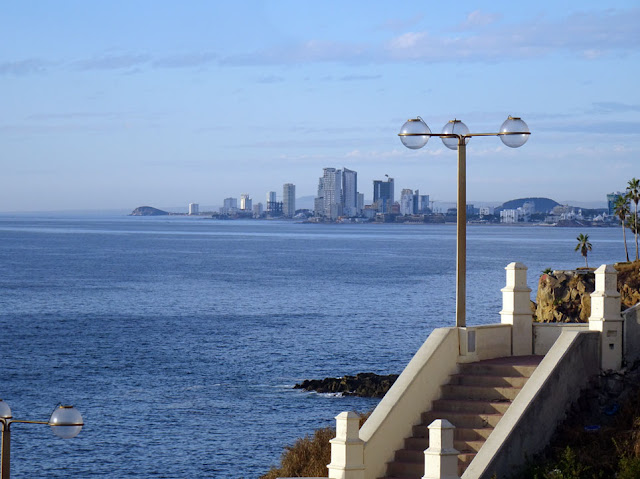 Back to the observatory site. There are a lot of stairs there. Wonder if they will go all the way to the top. The think I really wonder is. If someone wants to visit the museum and take the tram - or heaven forbid the stairs f- up to the observatory where are they going to park their car when they get there? 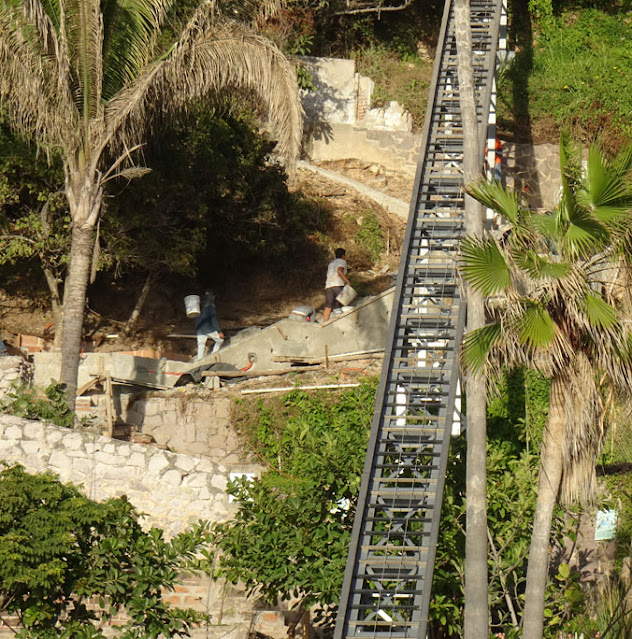 Another look at the observatory. Some information again lifted from the Mazatlan Post
"themazatlanpost.com/2020/02/29/video-new...

In mid-March, it is expected that the funicular, about 50 to 60 meters on its rails, installed on the top of Cerro del Vigía and as an exit point at the 1873 Mazatlan Observatory, will be in service to the public, combined with a guided visit to this property that dates back to the end of the 19th century in the time of Don Porfirio Díaz, former president of Mexico." 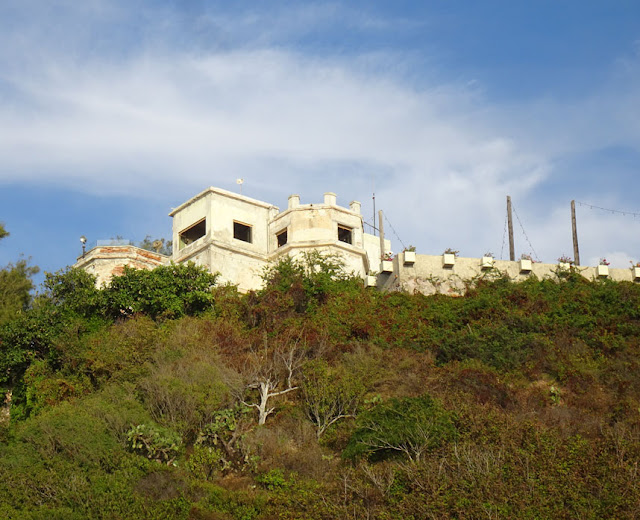 Oh! there is the drone. The video in the last post was taken this day. 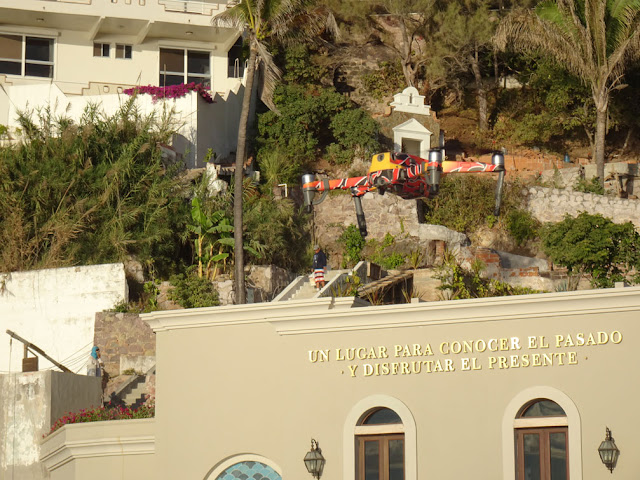 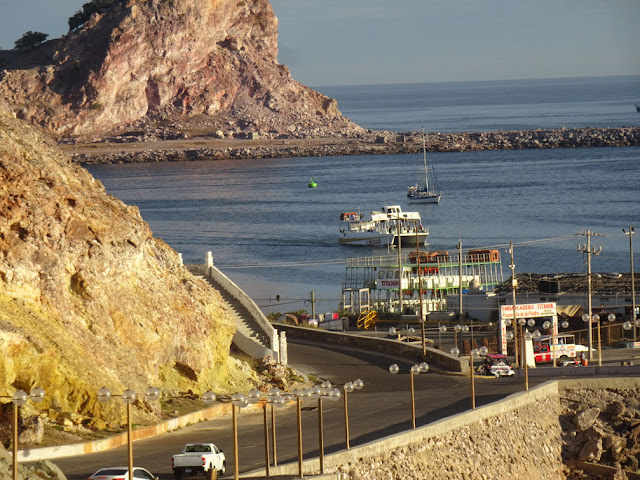 Bill and his drone. Coming in for a landing. 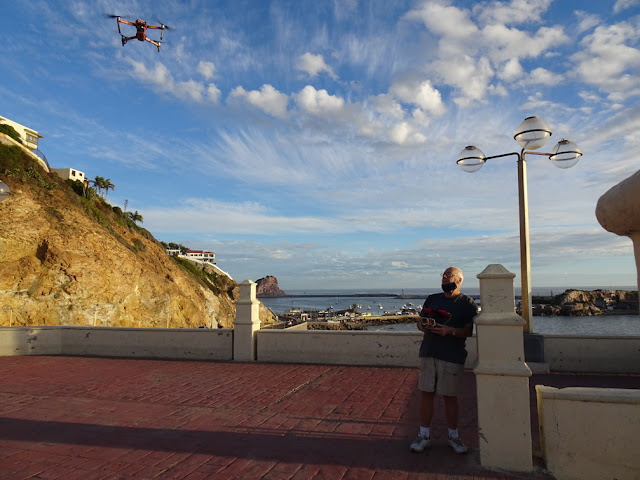 And Willie, the Jeep, waiting patiently for us. 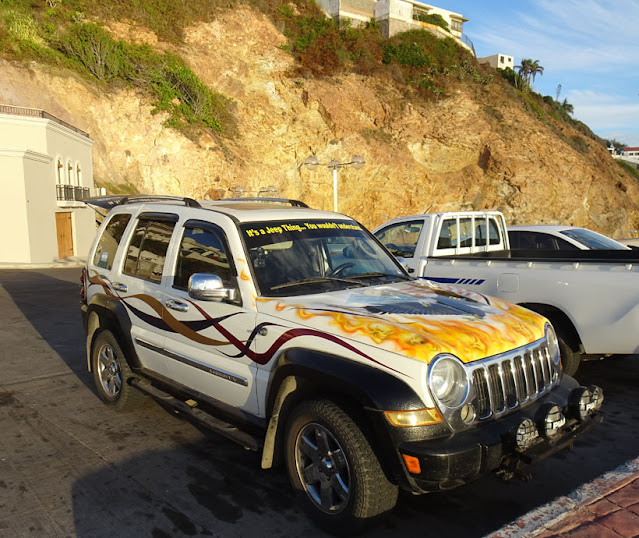 Got some dash cam video from this day, still working on them. Stayed home until dinner time yesterday, and no plans, except to pick up laundry, today.
Went to El Quelite this morning. Fun day.
Posted by Carol and Bill at 2:11 PM

BTW you mentioned a while ago that you hate when your mask gets wet in the humidity. Ig it's any consolation, they also get wet in the cold!!

Jackie, cold wet mask has got to be uncomfortable. freeze your lips!
Humidity has dropped some but tonight it is supposed to rain.