We continued driving down the Malecon, through Olas Altas, past the look out point and to the harbor.

We decided to drive out the road towards the beginning of the trail to the lighthouse. Boats to Stone Island. Not sure I'd want to be on a boat called Titanik! 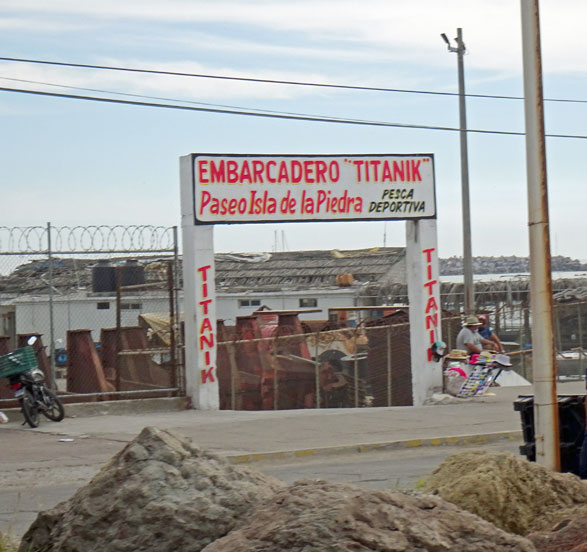 I don't remember seeing this memorial before. 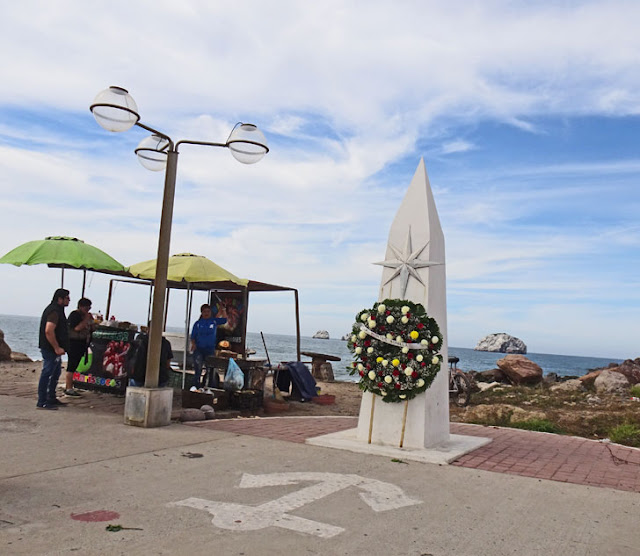 This red truck has been turned into a food cart. The light house is on top of that hill. 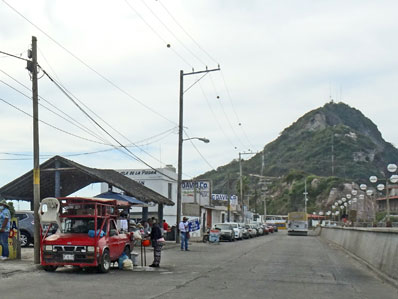 Lots of people lined up to make the hike up the hill.

The hike to the lighthouse takes about 30-45 minutes, depending on how fast you hike, and is about 1.5 miles long.  The trek is pretty steep, so even though it's not long it gives you a good workout.  Along the trail, you can see iguanas, various birds and butterflies, and interesting types of cactus. Once at the top, you'll be treated to panoramic views of Mazatlan, and we can relax and enjoy the scenery and take photos."

Every year I wonder if I could make it up there. But then self preservation kicks in and I shake my head NO. And they want me to pay money to do it! how many of you can climb 365 stairs in 30 minutes? 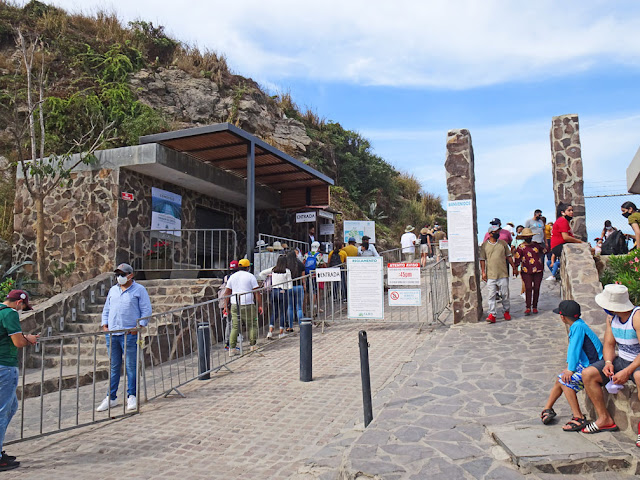 First you go up the dirt path then all the stairs.

Heading back along the same road. Think I'll just park my boat in the street. 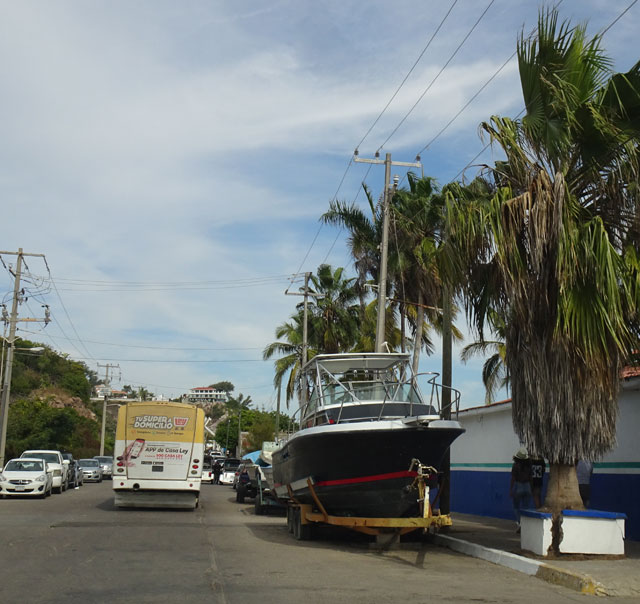 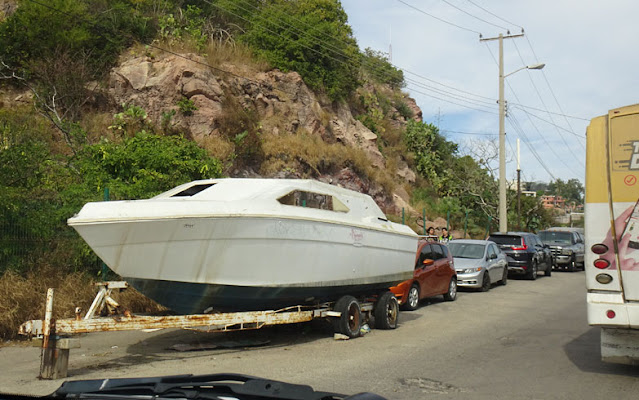 That's okay, just drive down the side of the street when ever you want. Other traffic will just go around you. 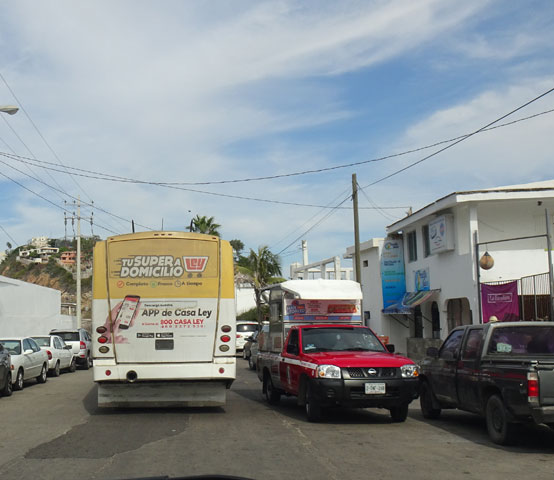 I think these hats are neat. 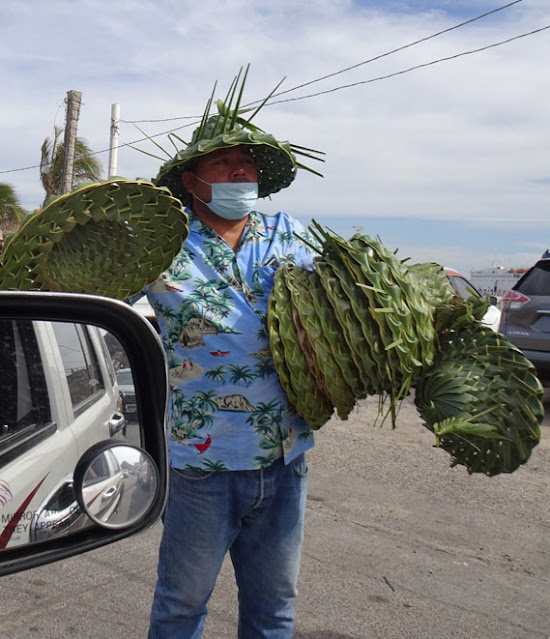 Looks like this pulmonia is a good cart too. Couldn't tell for sure. 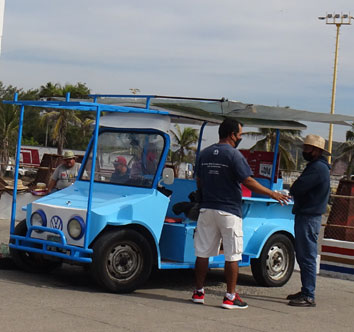 Things on a wall surrounding something military - base or school. 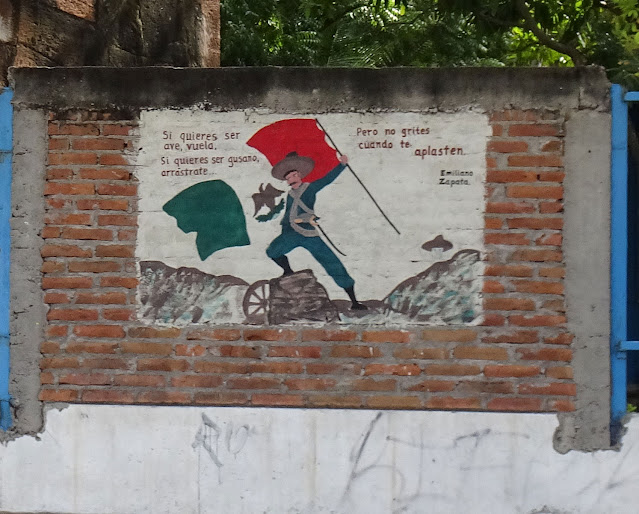 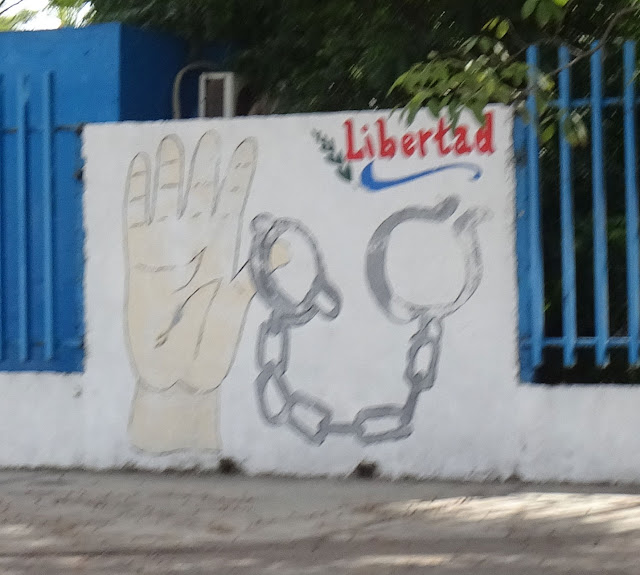 More painting on the wall. 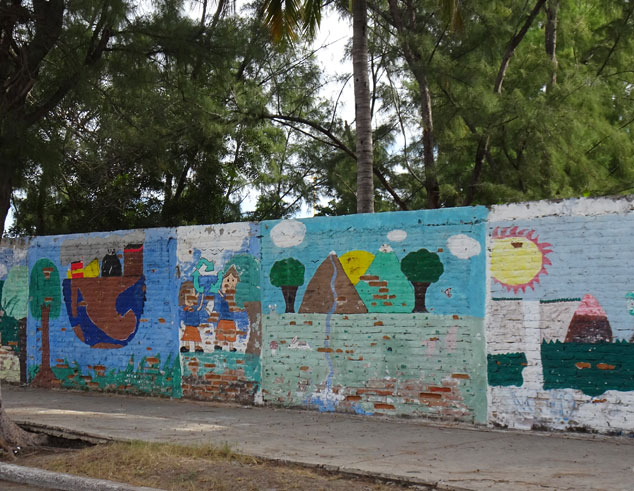 We haven't been in this area of the city for a long time. Nicely painted building. I'm glad Bill seemed to know where he was going. I was lost. 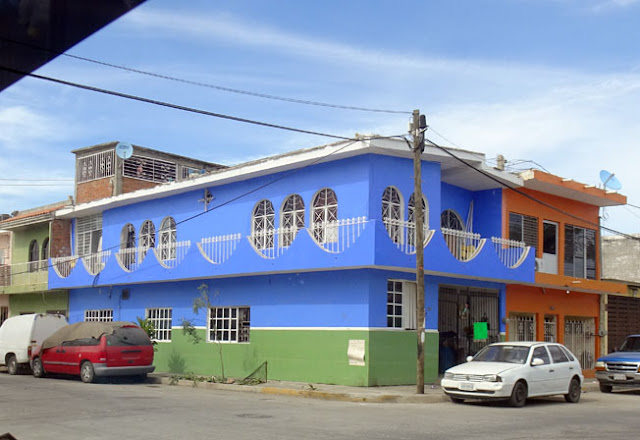 A hard way to get around. Notice the car with the speakers on its roof. No idea what he broadcast. 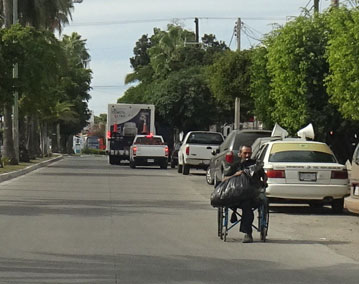 We discovered where they park the Carnaval floats to store them. Look a little worse for wear. 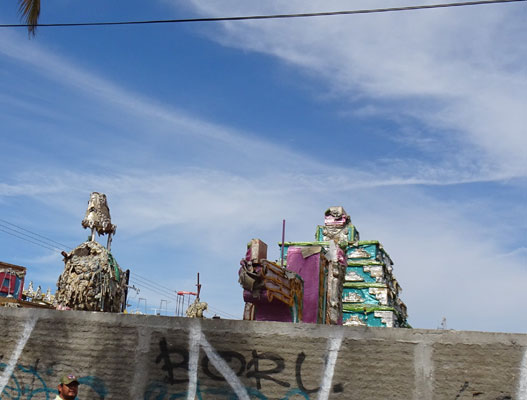 Just thought this was pretty. Entrance to a small hotel. 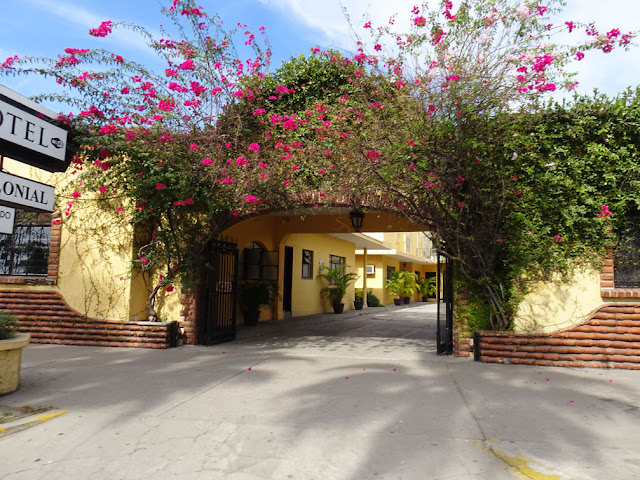 A school for women. The name of the school is Ernesto Che Guevara. Interesting. 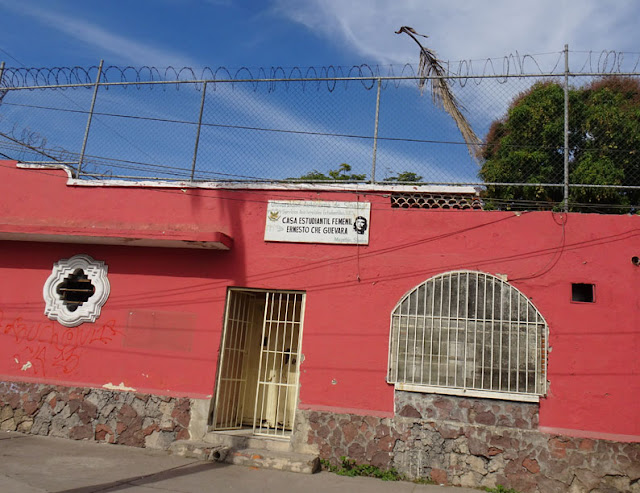 Some dash cam video of the beautiful old buildings on a couple of the streets in Centro. Click here to view full screen.
You saw the car stop so I could get out and take this picture.
I took a picture of the door in the tree in the wall the other day, but somehow didn't notice the painting next to it. 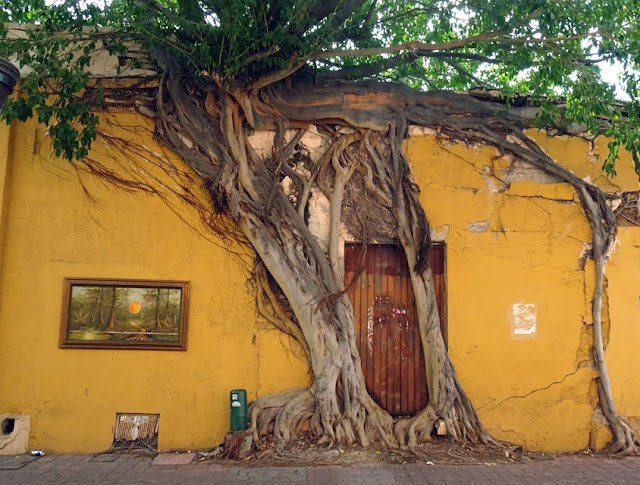 Just some old graffiti on an abandoned building. 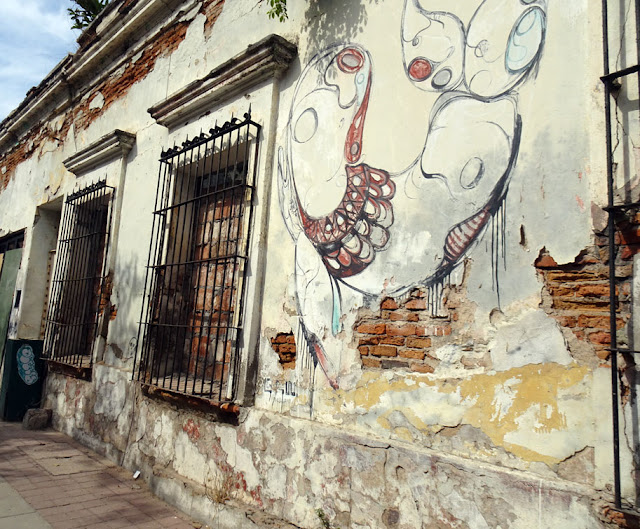 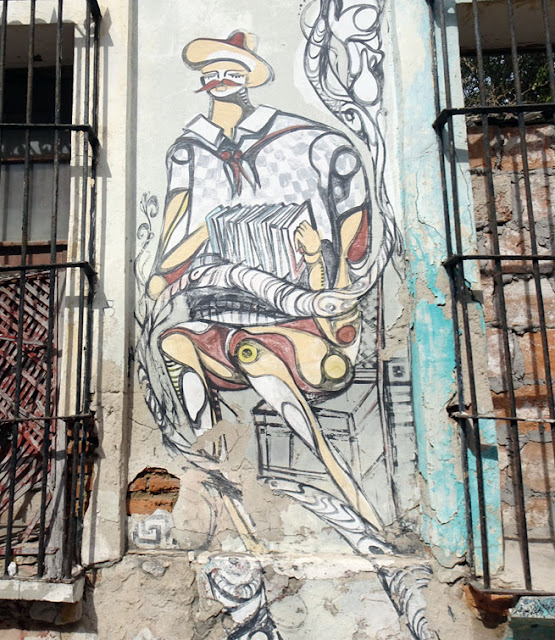 Some buildings - doors and windows that caught my eye. 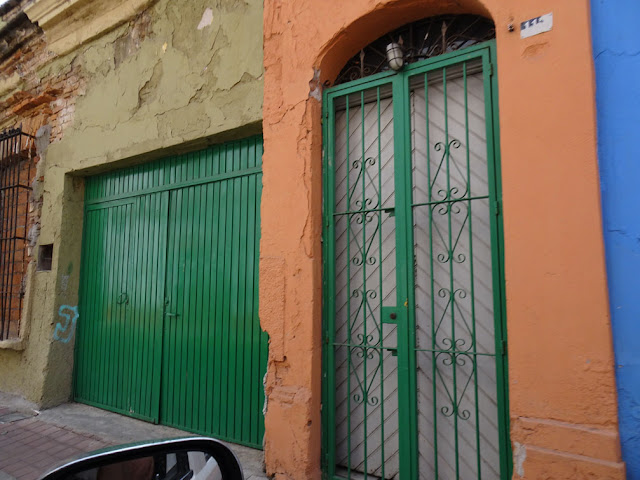 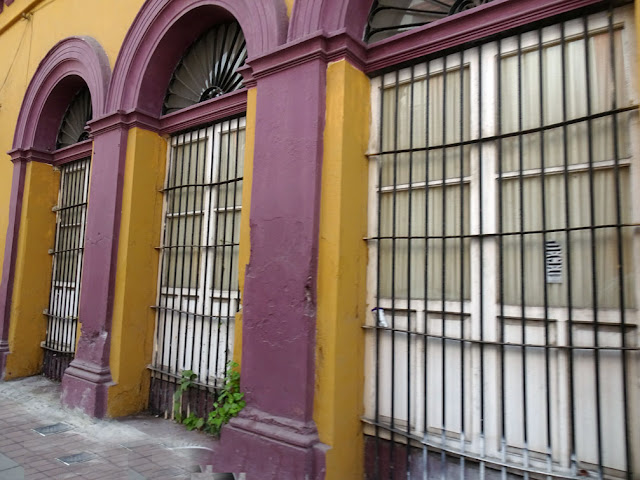 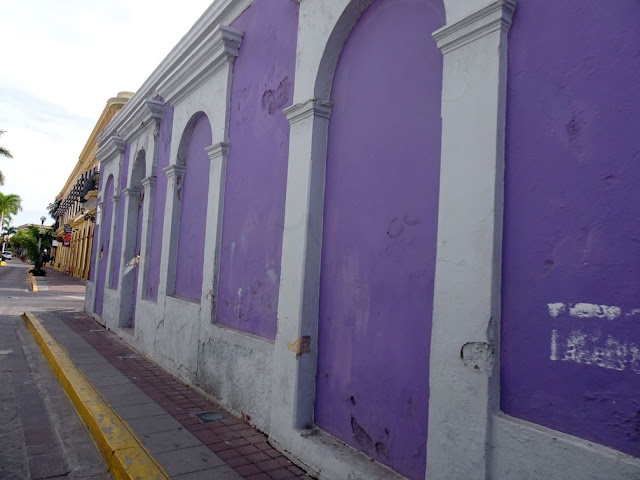 Heading up one of the main streets in Centro. This is a real wheel wrecker pothole. 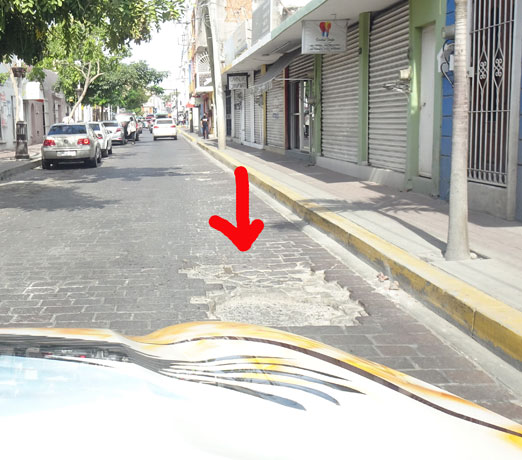 Looking down at it as we drove around it. These streets were just repaved a couple of years ago. 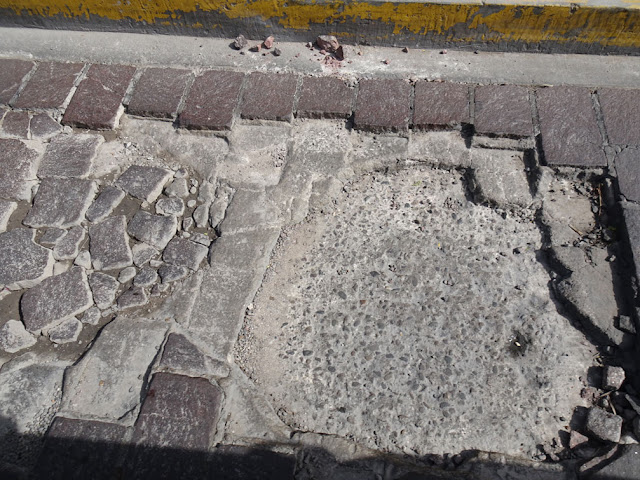 Hum...Bill thought she might be a Nun. I think she is part of a Christmas reenactment. 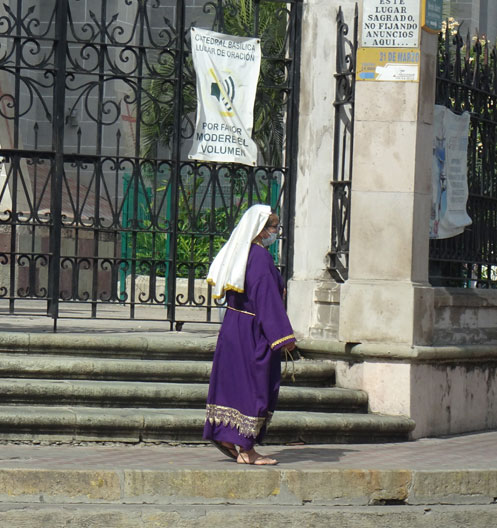 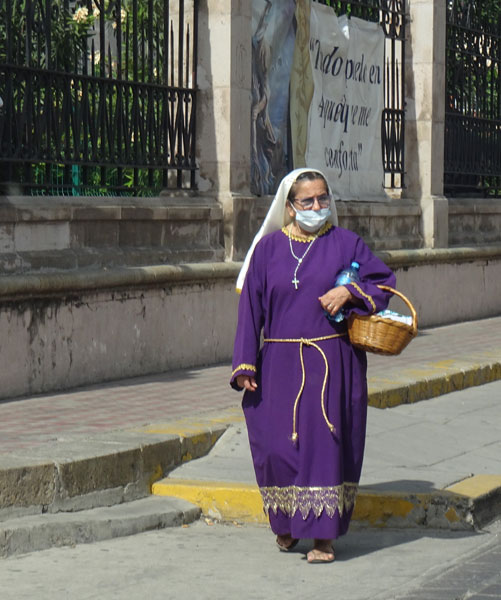 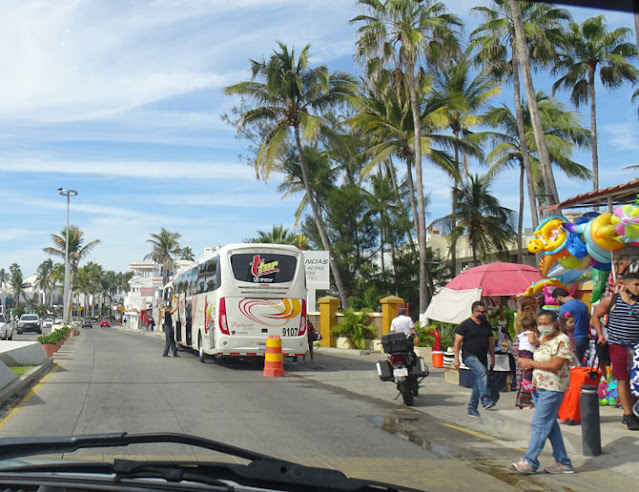 Interesting color combination. Kind of a pretty new building. At least it is finished. 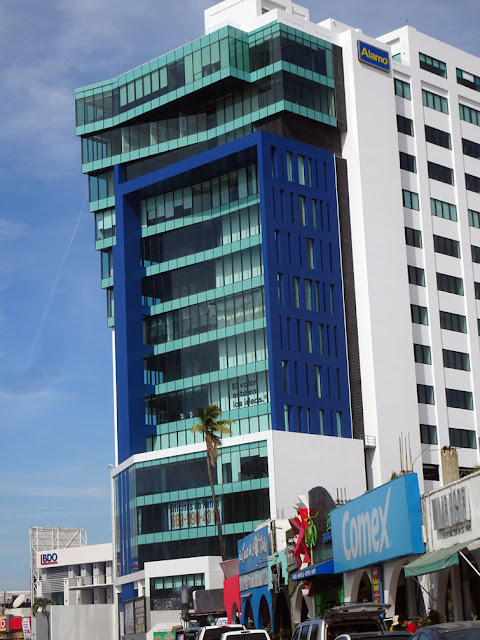 And that was our drive Sunday.
Posted by Carol and Bill at 11:59 AM