This is for those of you at home in the North.

Christmas Day we were up early and as soon as it warmed up some we went for a ride. From our northern end of the town to the harbor. It was a great ride. No one else was out and about. So just enjoyed going slow and snapping pictures of what ever caught my eye. This is the road leading into the Marina. 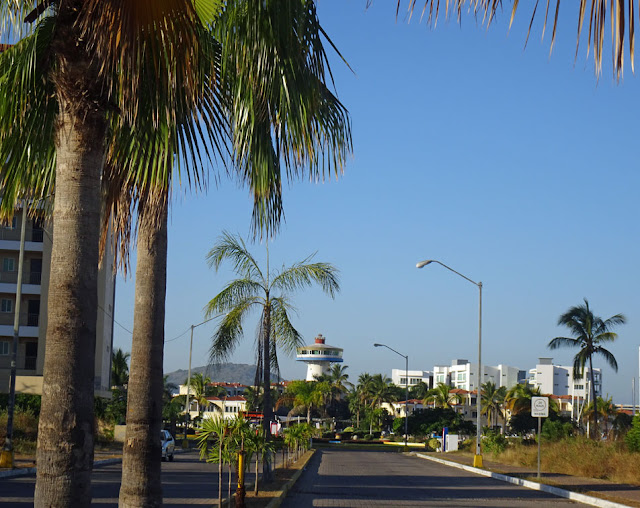 Heading towards downtown. It was about nine o'clock in the morning. And not a creature was moving. Except us. 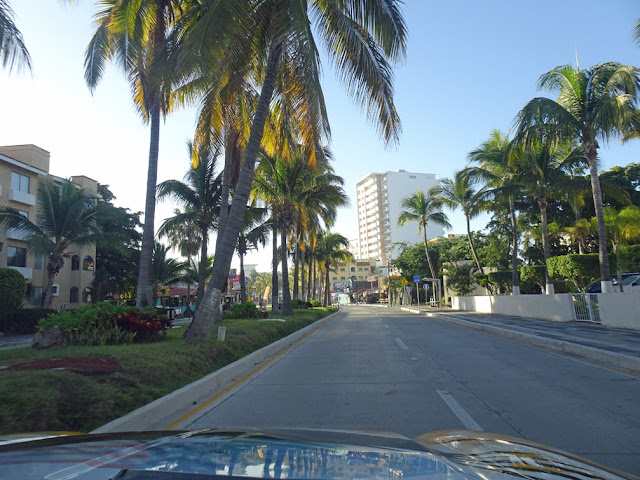 I sure hope the city doesn't let this beautiful building fall into ruin. 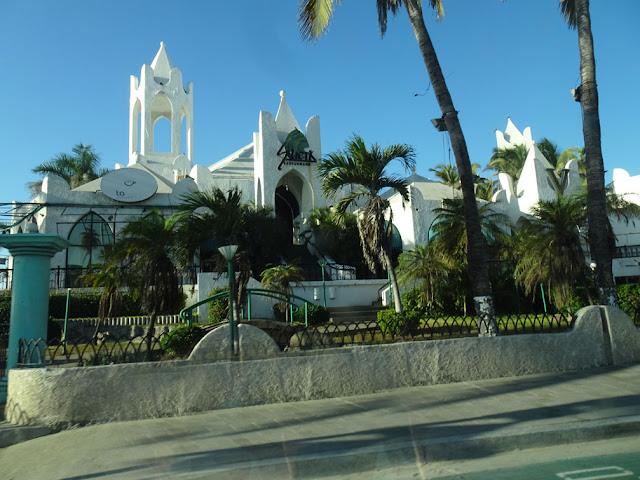 This picture even surprised me when I started to go through the photos. We were still in the moving car when I snapped it. No one around. 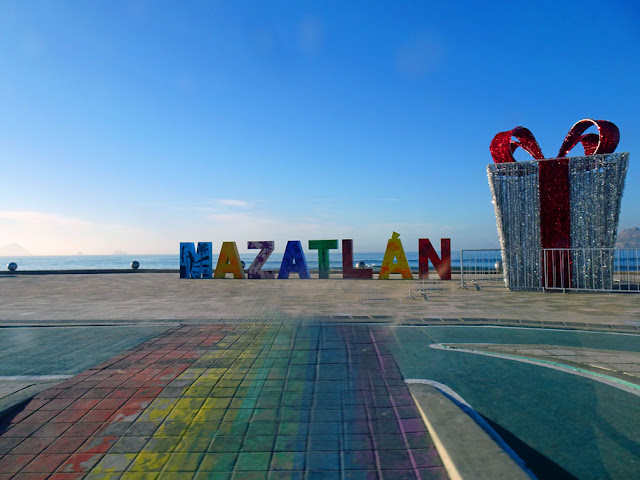 A couple people out for an early walk. It was a very misty hazy day. Almost can't see the buildings across the bay.  I wondered how I managed to take a black and white picture - then I noticed the green light - guess it was just the way the sun and mist and windshield came together. 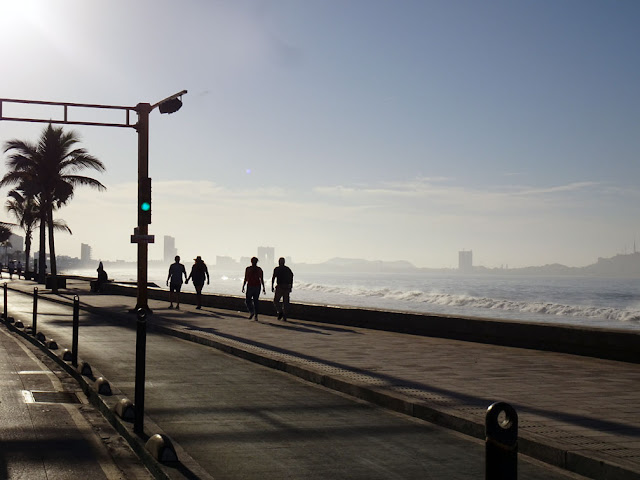 The waves were pretty high and rough that morning. We could even hear them from the RV. 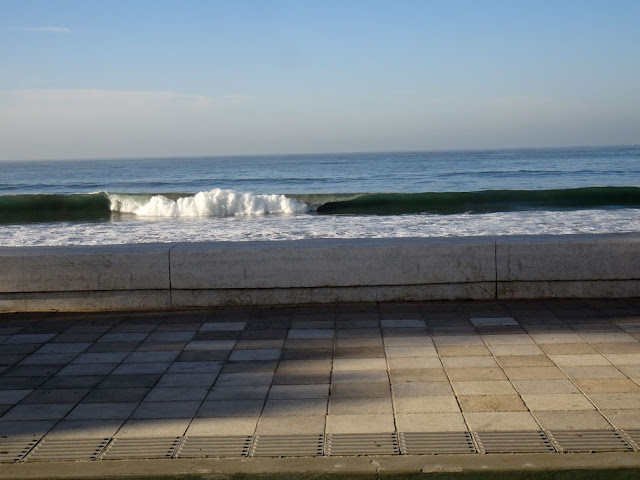 Bill stopped for a bit so I could get out and take pictures of the beach and waves. Looking south. 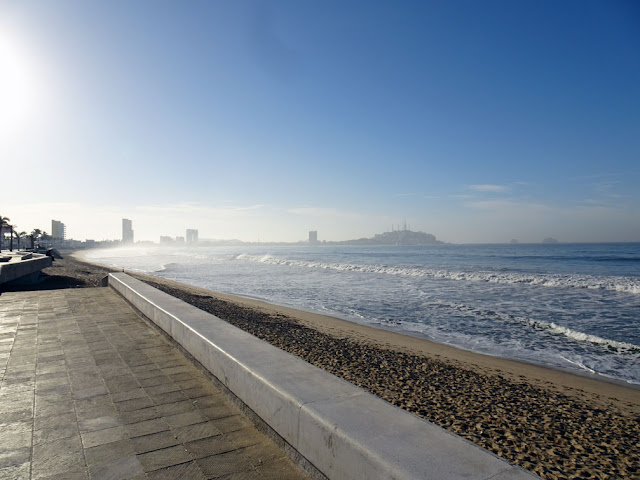 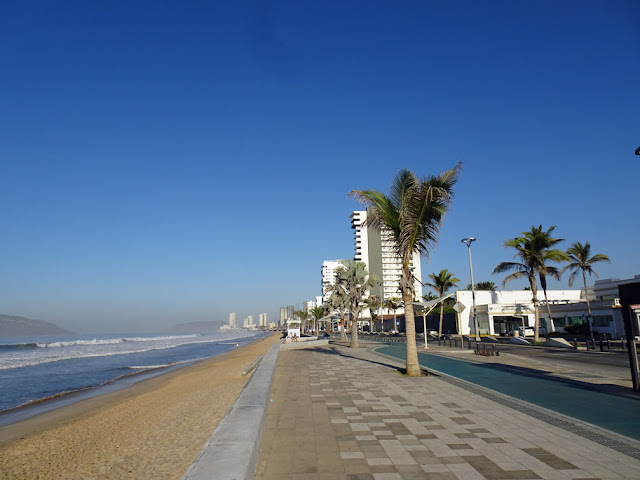 OMG Who painted the seals/sealions belly orange? Maybe they thought it was an oriel. 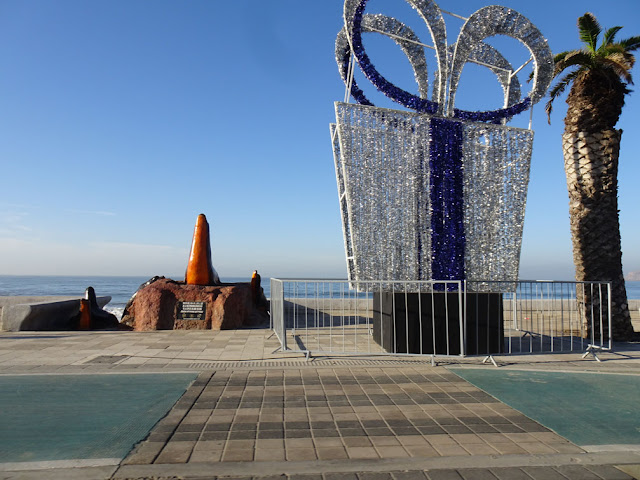 Or they had a little bit of orange paint they wanted to use up? 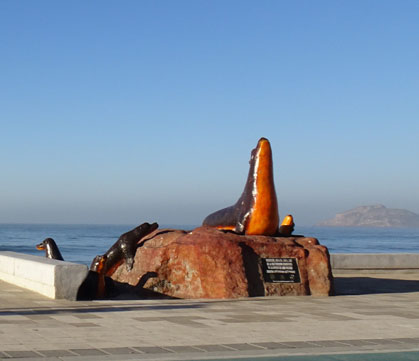 No one around the Pulmonia, now all I see is the lighthouse. Still haven't gone out at night to see the ornaments lit. 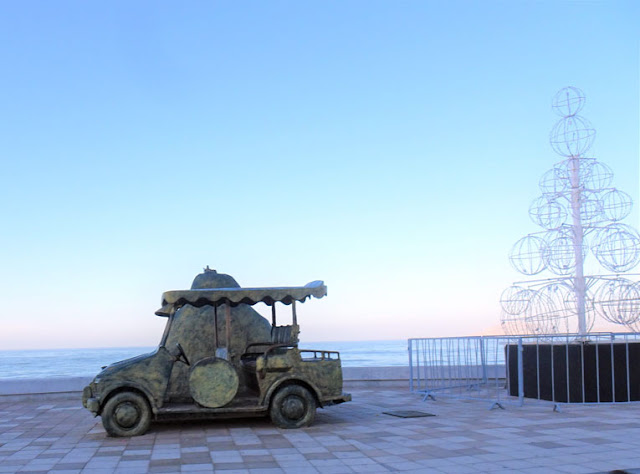 Looking across the water to the high rises on the north side of the bay. Just a peak of the fishermen's boats. 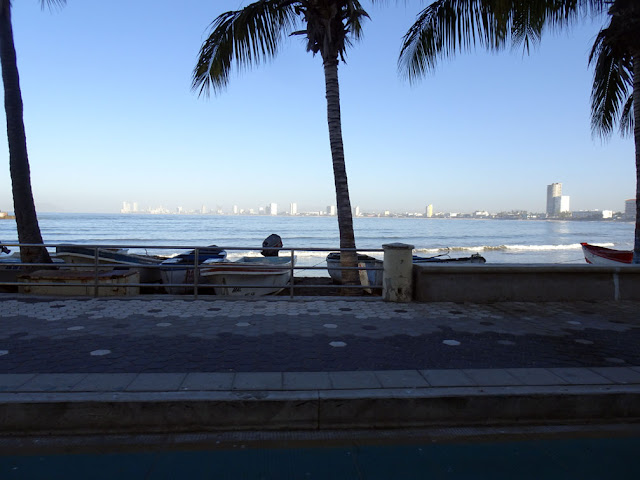 For once there were no cars parked in this area so we stopped to look at the sea water pool and slide. 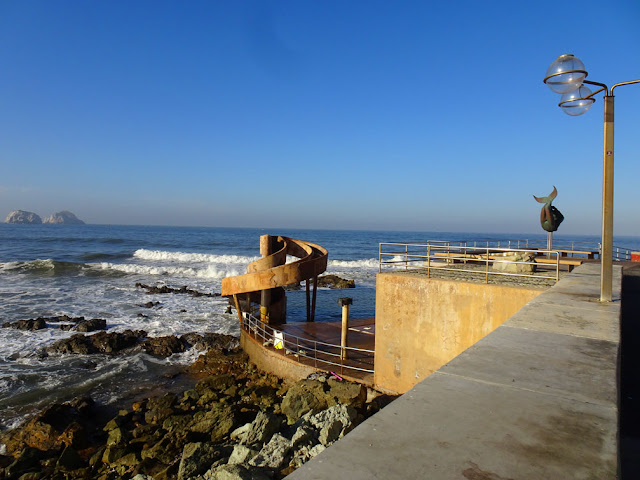 The waves were refreshing the water in the pool. If you want to go down the slide you have to bring water to the top with you. Otherwise it is a dry trip down. 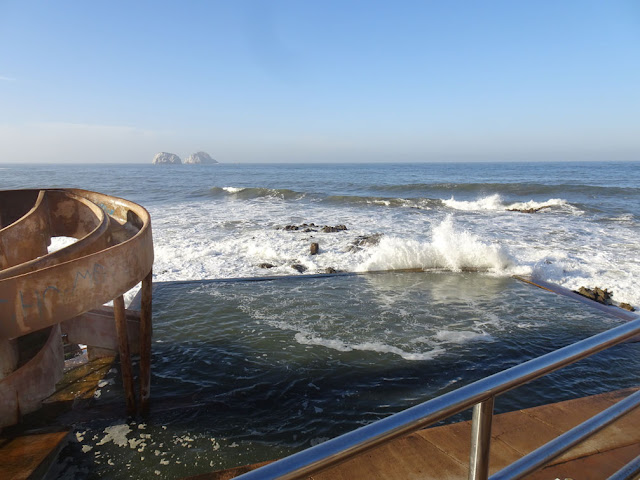 The beautiful building across the street from the pool. For years it sat empty. A couple of years ago i got repaired and a restaurant opened in it. Its status right now I don't know. The gates across the steps are locked. But it might be open at night. 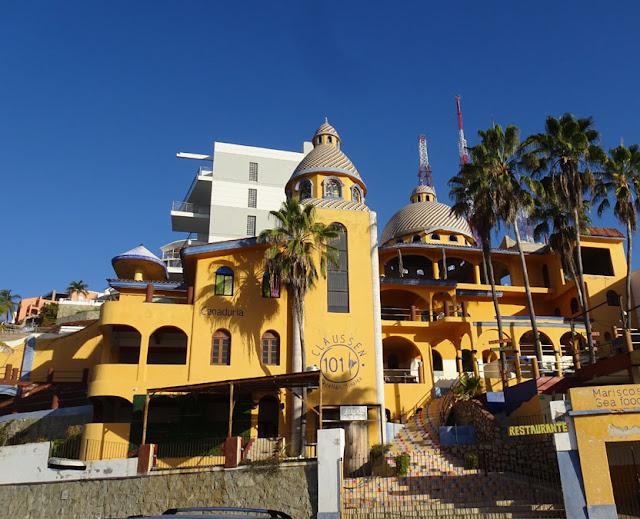 Olas Altas with no one around. Logical, as it was early in a day after a busy Christmas Eve night. But also reminds us of the times...Please people keep wearing your masks and social distancing so we don't end up like this forever. Like an old Twilight Zone episode. 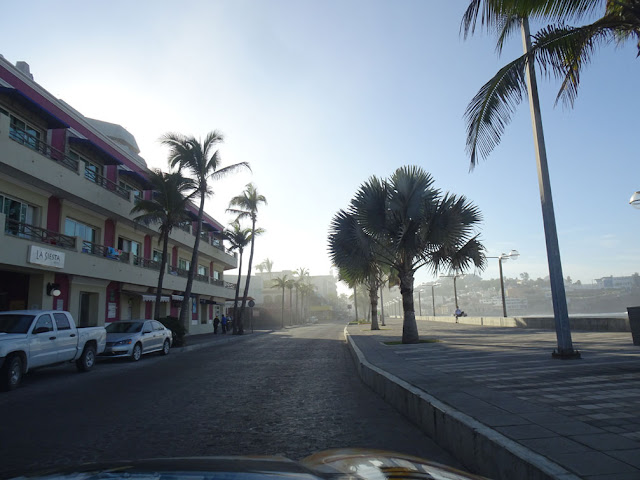 Just like the way this one turned out. Stuck the camera out the window and snapped. 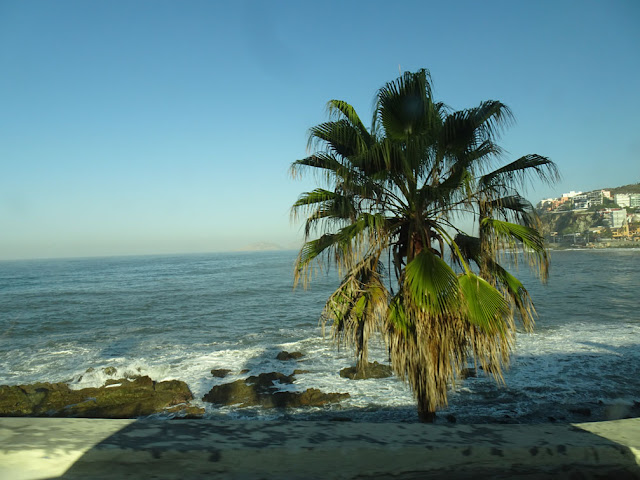 Another one of the look out points towards the harbor. There is usually NO parking there so we've never stopped.  Have seen many brides out there getting their pictures taken. 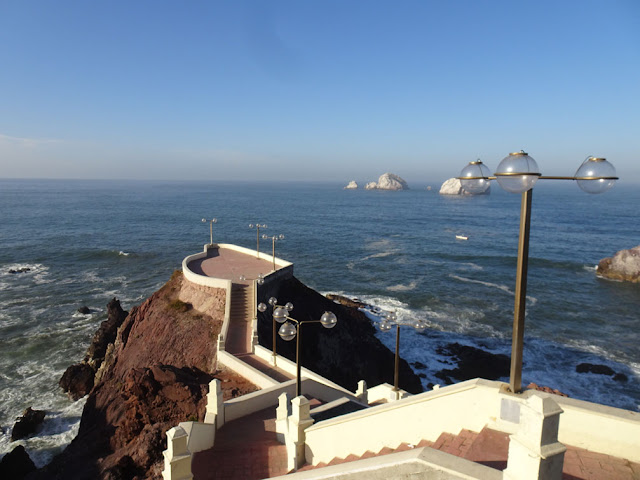 Looking towards the harbor, still very hazy and misty out. 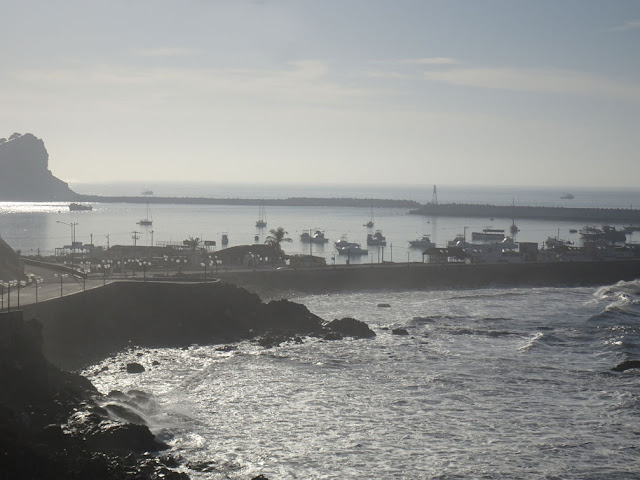 Heading back the way we came. Wish here weren't so many wires and poles in this picture. Can see the divers platform in the middle of the picture. The smaller one. The bigger one is for any one to go up on to enjoy the view. 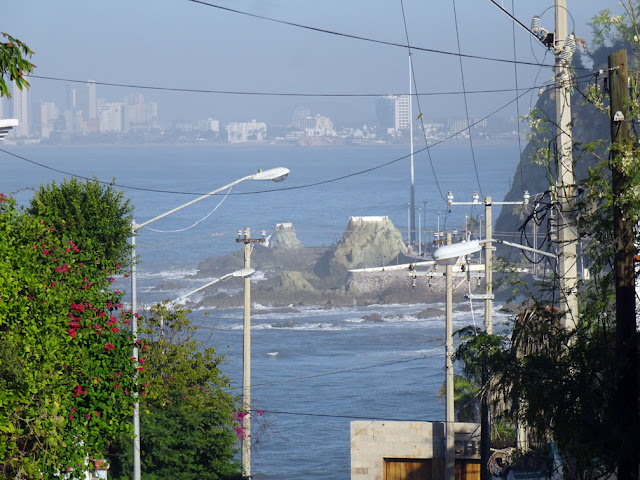 Heading towards Centro. I have liked these doors for years. And taken pictures of them before. Usually they are open as there is an auto body/paint shop behind them. Right in the middle of an area of restored homes. 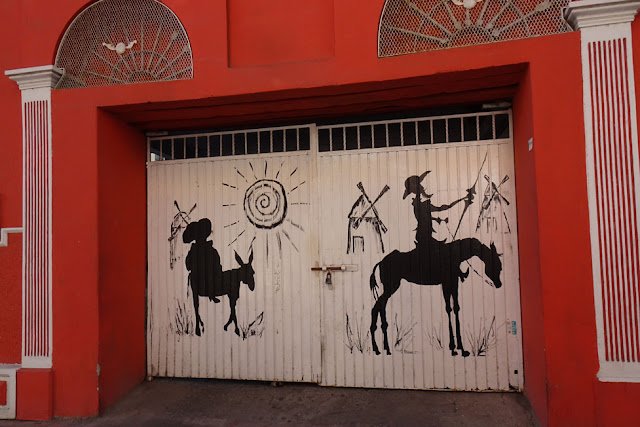 A balcony garden. Amazing where plants can take hold and grow. 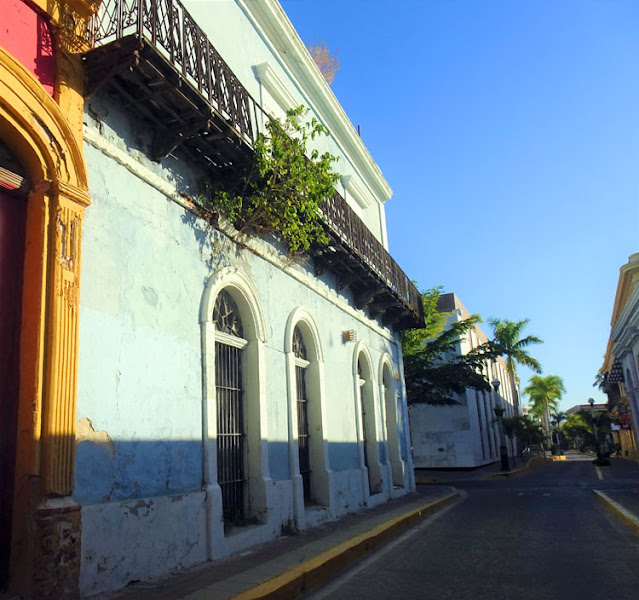 When you get behind a trash truck you stay there, no way around. See the guy on the right putting a bag full of trash on the truck. The people leave their bags of trash out when the truck is due and it gets picked up. No garbage cans, just bags. 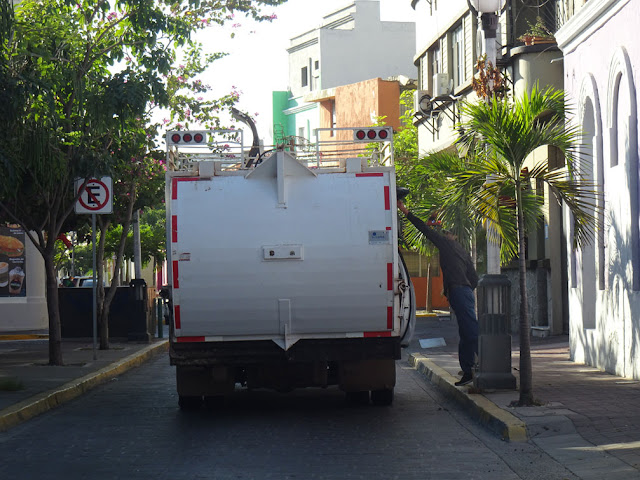 Turning up a street to get away from the truck. See the building with all the greenery coming off the roof and growing to the sidewalk. 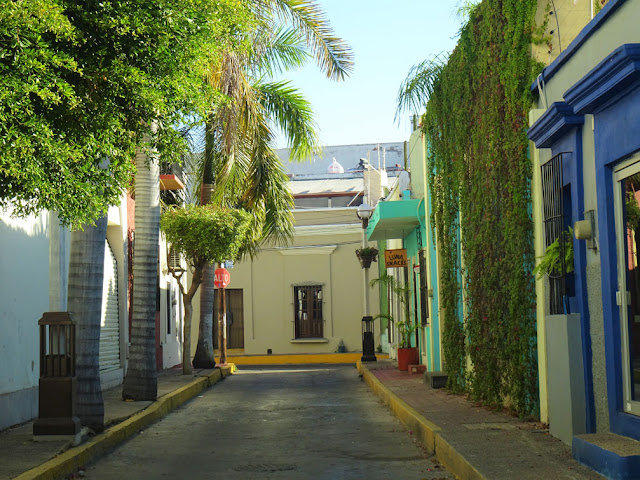 Turning towards the Plazuela Machado. On the right. 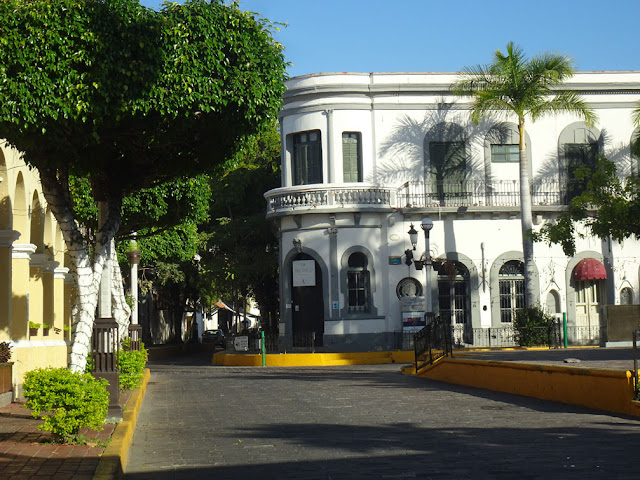 Going by the Plaza Republica in front of the cathedral. Setting up for later in the day. Back on the Malecon going towards home. Still no one out and about. 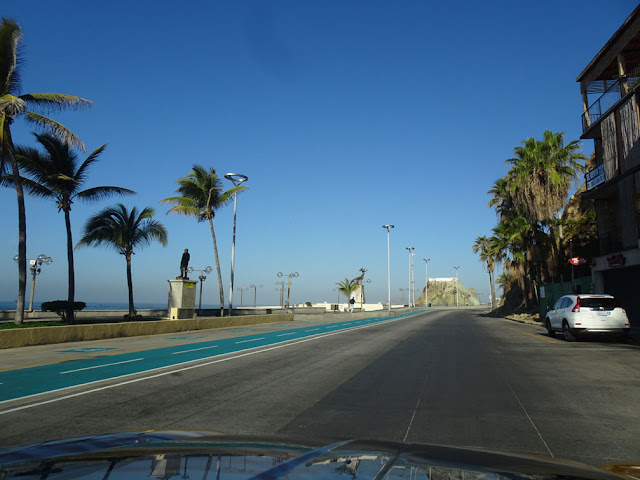 Lots of beautiful statues on the Malecon. 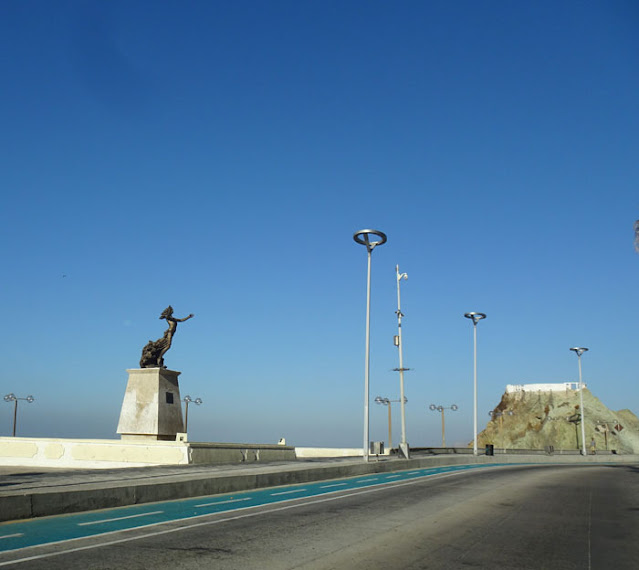 Just another shot of the high rises - more and more every year along the water front. 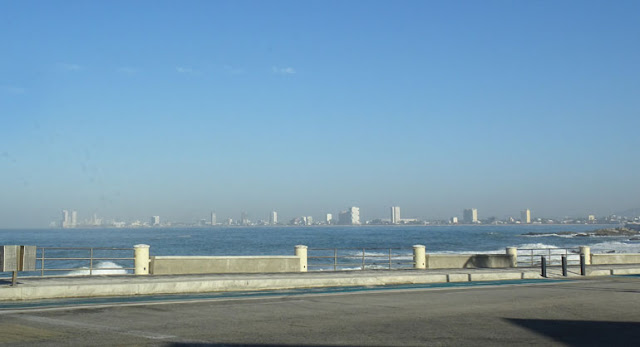 Businesses put plastic barriers out in front of their stores so when they arrive they have someplace to park. Just guessing about that. 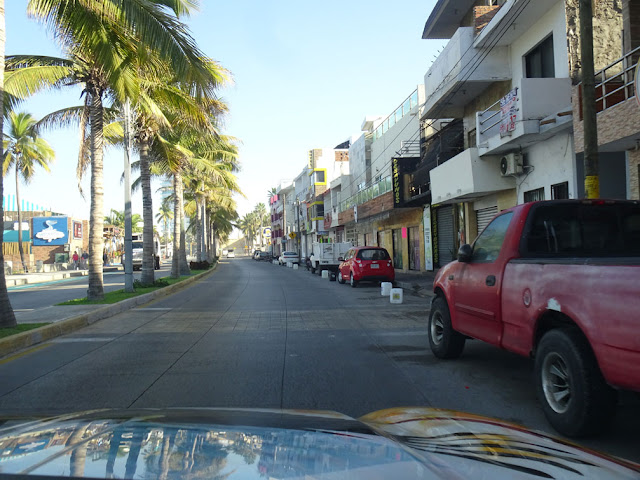 And then we continued on towards home. A few more cars and people out by then.
Posted by Carol and Bill at 11:13 AM

Kathy - thank you - it was weird to be the only car on the road most of the time.

Merry Christmas! It is nice to see the pictures of areas that we know well, and without cars. Looks like you had a beautiful day! Stay safe and well!!!! Hugs....N/D

Nancy - hopefully next winter you will be here taking the pictures. Have a great New Year. It can only get better - I hope.