Christmas is coming to Mazatlan

Last nights sunset. Had to share it. This is looking south. I was surprised to see the Christmas lights show up in the header. 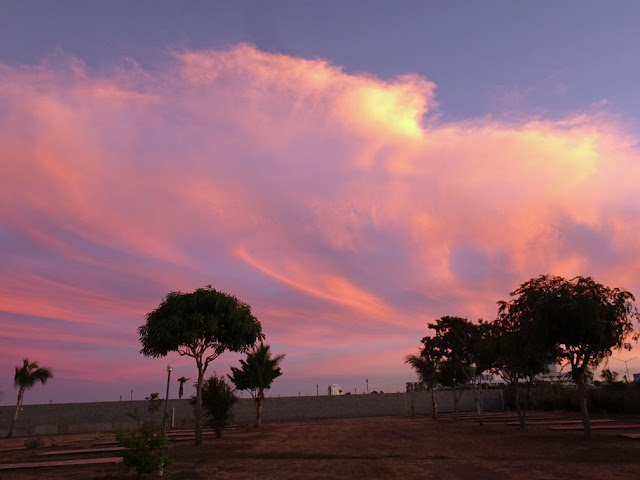 A little bit of color the other morning. No spectacular sunrises yet this year. But I'll keep a watch out for one. 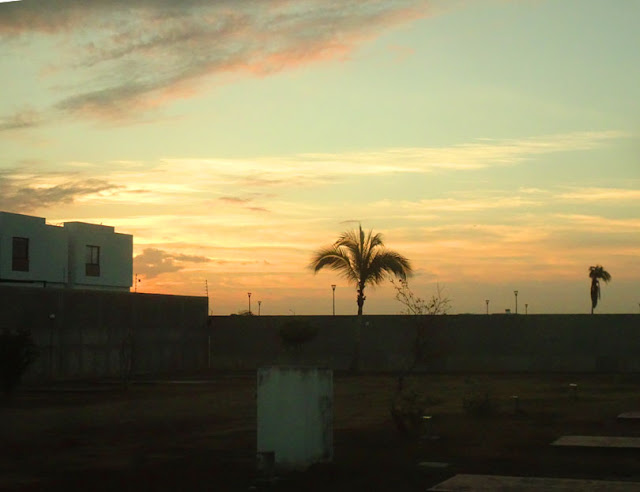 Breakfast at Torres on the beach again. Very peaceful there. All the windows open and hardly any other customers. Bill watching the ocean waves and a sailboat out there. 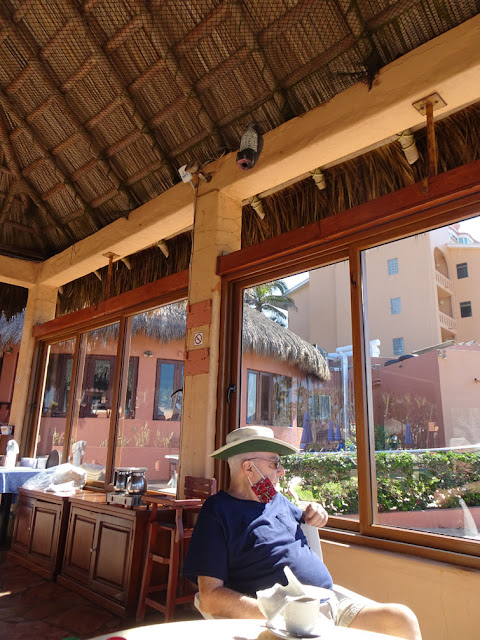 For the first time the waves were high and rumbly. 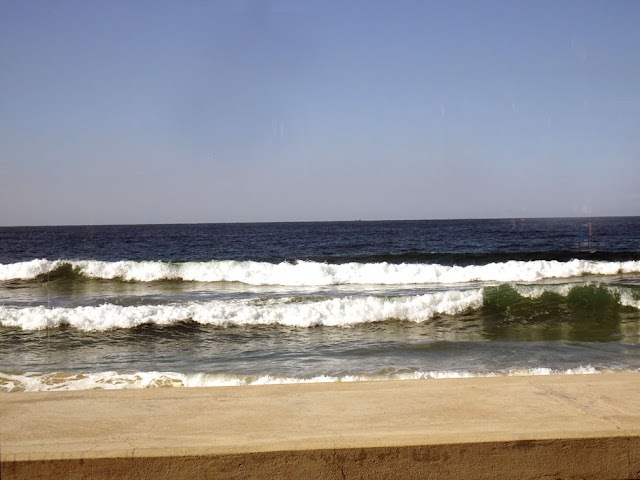 What he is looking at and enjoying.

I think these flowers are so interesting. One of the many beautiful plants growing at Torres. I know every year I take a picture of them, can't help it the camera just goes there and clicks. 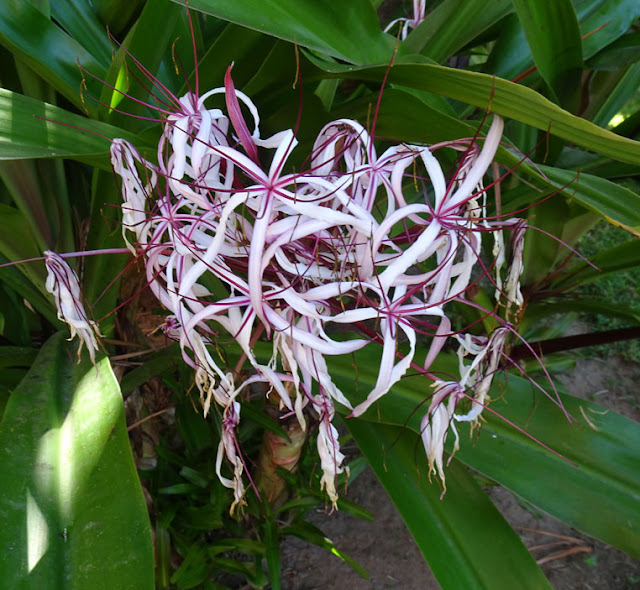 We took a ride after breakfast. This construction is right downtown in the Golden Zone. (Tourist hotels and shopping section.) They started it over a year ago. Then it was shut down for a while because of the death of a worker. Now only see a few people working here. 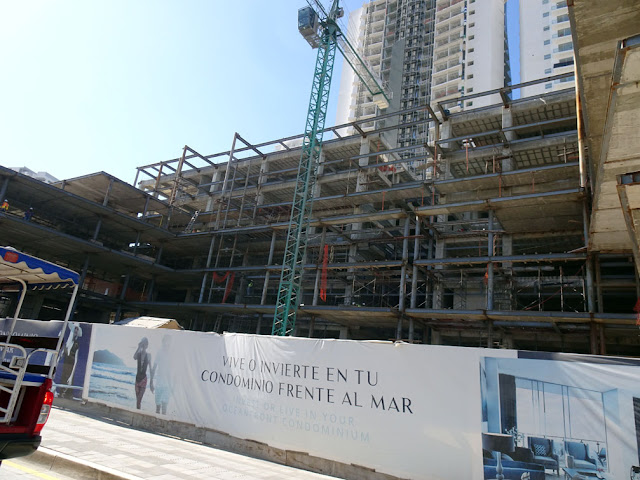 And one of them is this guy. A big construction project and he is mixing cement in a wheel barrel. 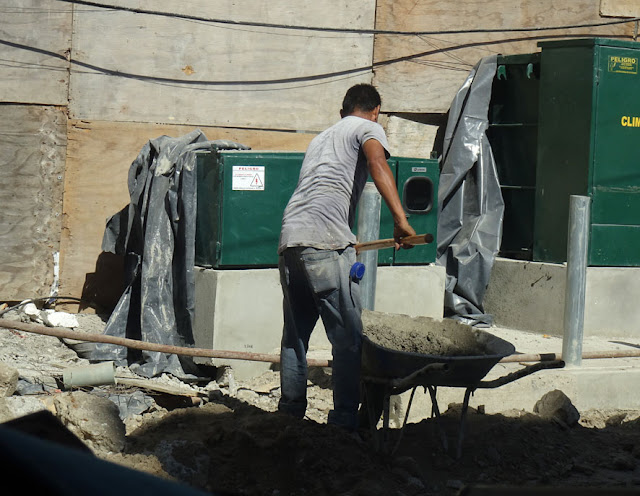 Valentinos - the Christmas decorations are going up along the Malecon. 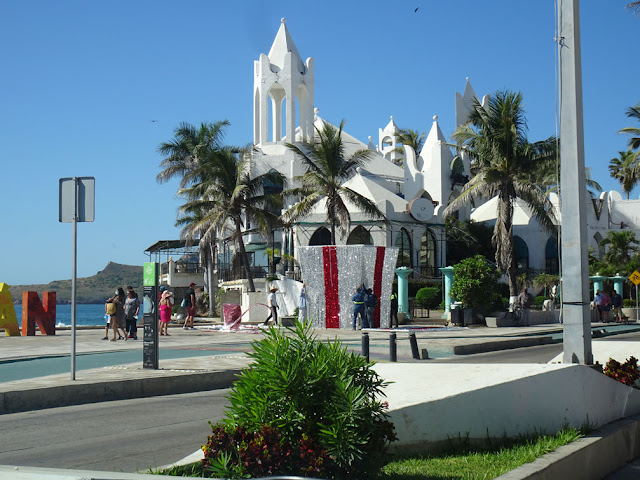 Over the summer a lot of the center divider sections along the Malecon were redone. They are quite pretty with their new plants and colored rocks or bark - can't tell which. As we went by they were mowing, weeding and cleaning up. A shadow of the halo streetlight in the center divider. The light are very pretty at night. 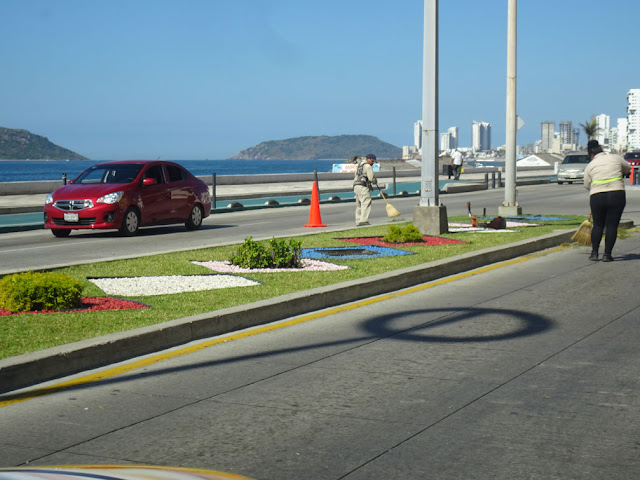 Big wrapped presents this year along the Malecon. I think the same ones as last year. If so they will light up at night. 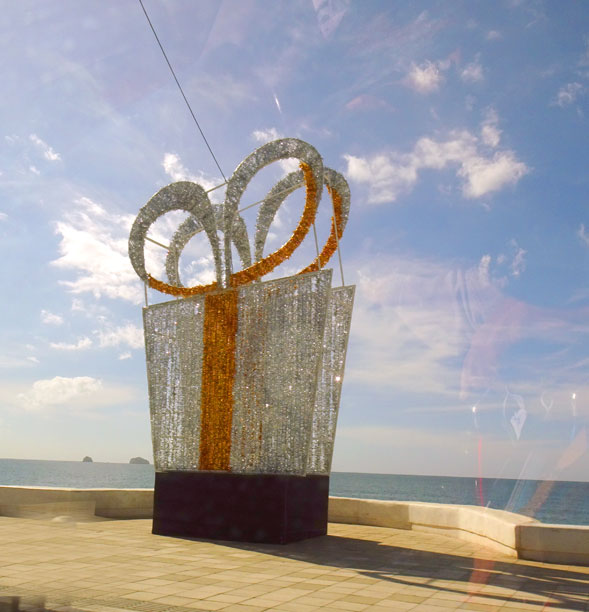 I bet this is pretty when lit up. 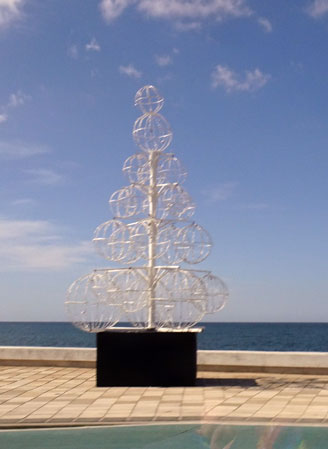 The halo like street lights in the center of the street were still on. Taking all these pictures through the Jeeps windows. Colors are a little off. The sky was a brilliant blue. 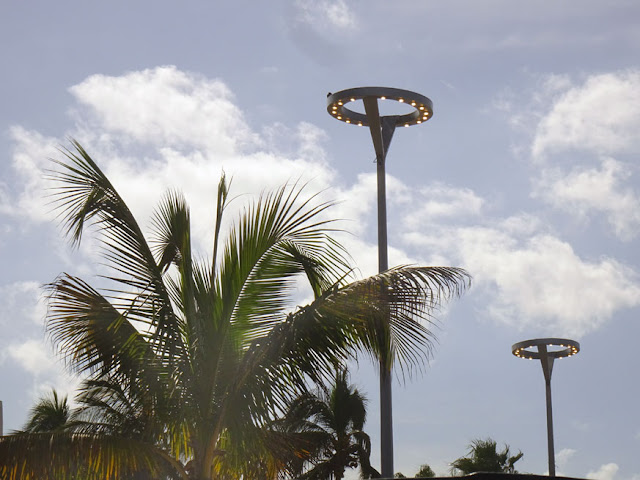 A very colorful ornament near the Fisherman's Monument. Looks like you can walk through this one. A hat vendor making a sale. 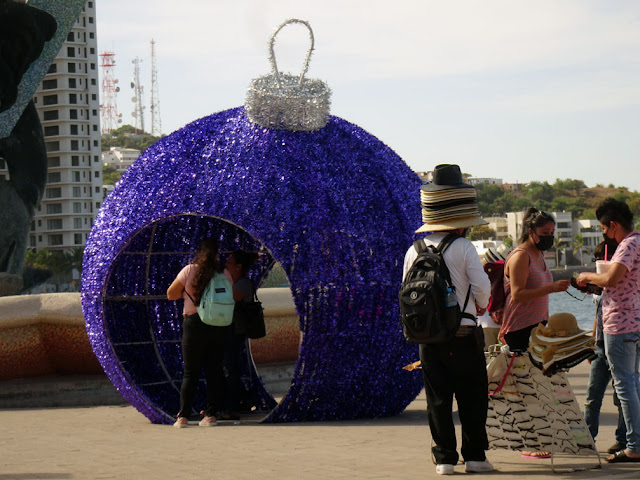 The rest of these are from the Plazuela Machado. the reindeer and the human figures look like the same ones they used last year. Only they have painted them white. Still working on the white tree. 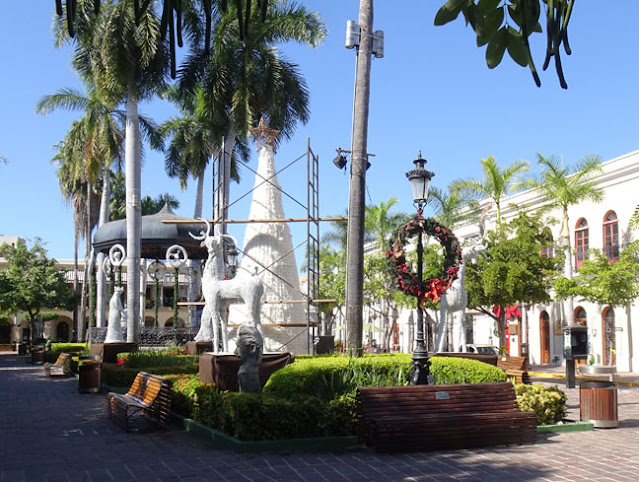 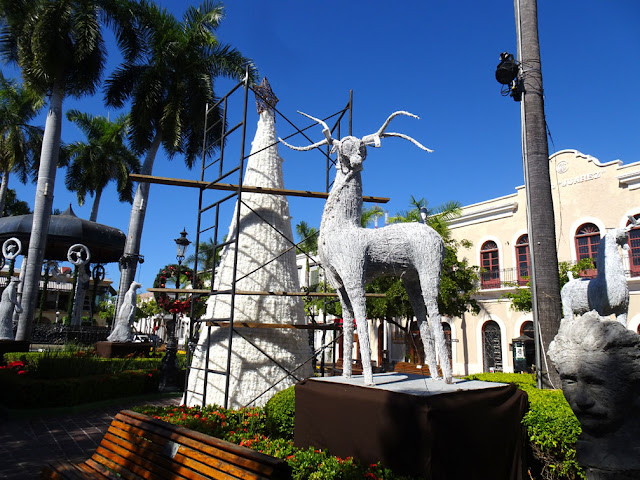 Hanging white presents in the gazebo. And deer wreaths and garland around the outside. 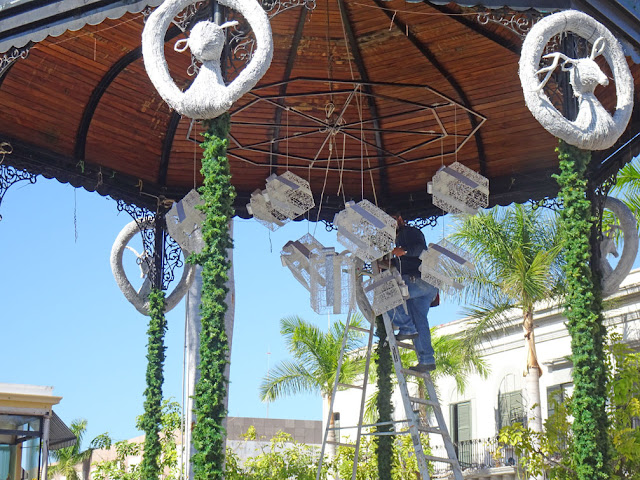 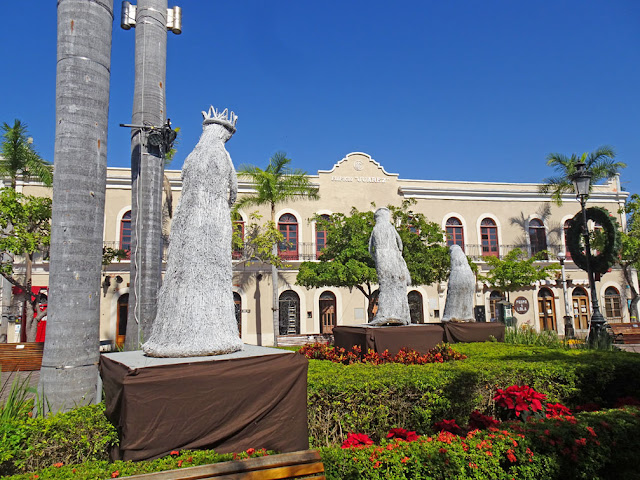 Looks like the gazebo could use a little TLC. 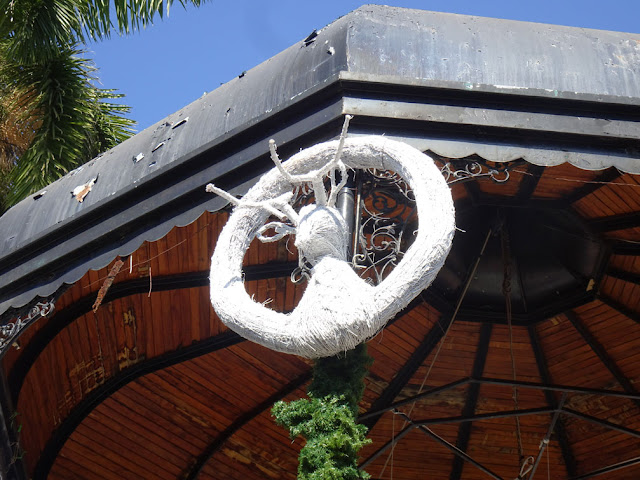 We were walking down the back side of the plaza so pictures are of the figures backs. 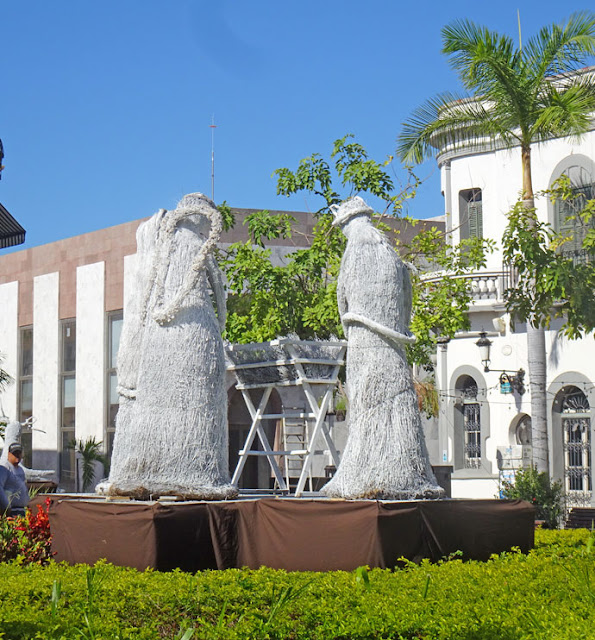 From the front - taken from moving car. 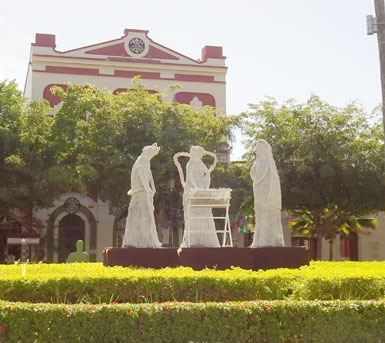 Don't know what the black box like thing will be. 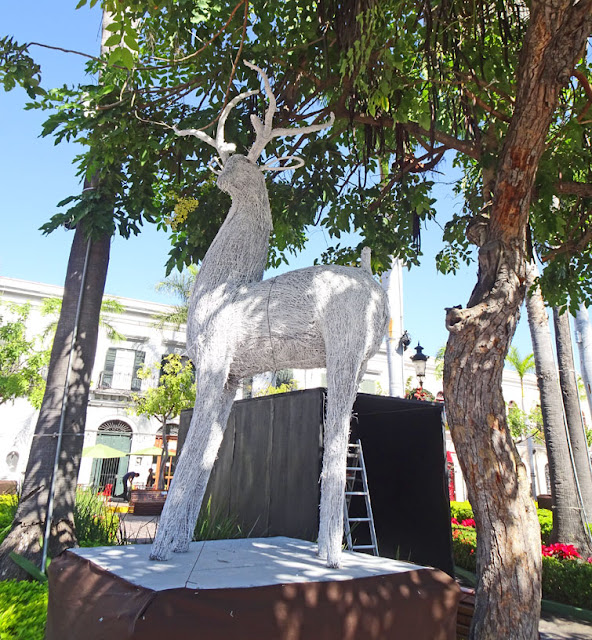 Lovely poinsettias in the planters. 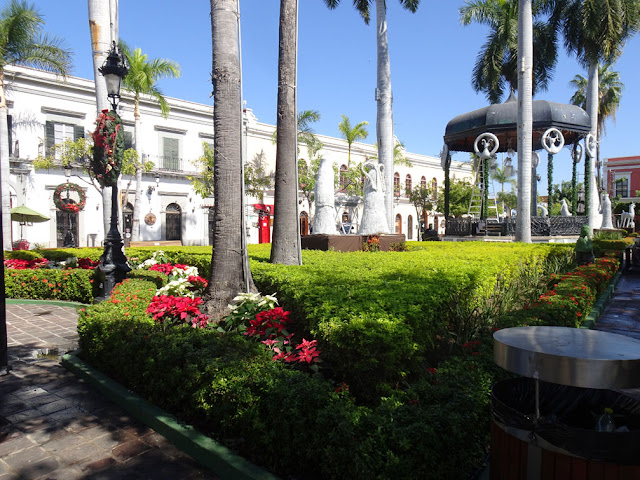 Pretty wreaths on the lamp posts. 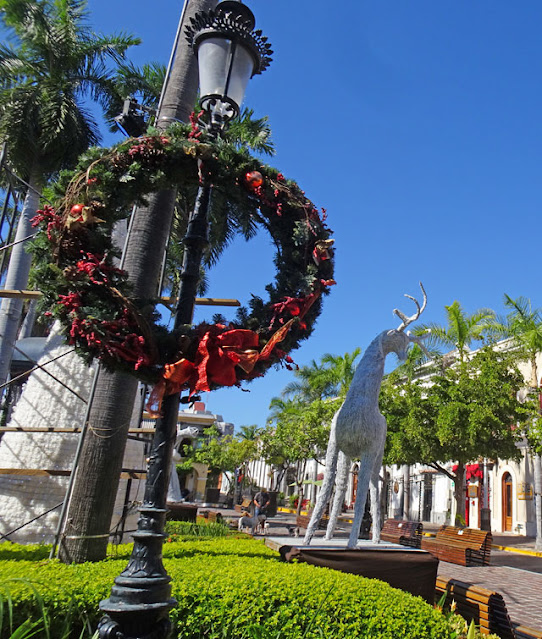 I imagine it will look a lot different at night when everything is lit up.
Going to the grocery store on the way home. 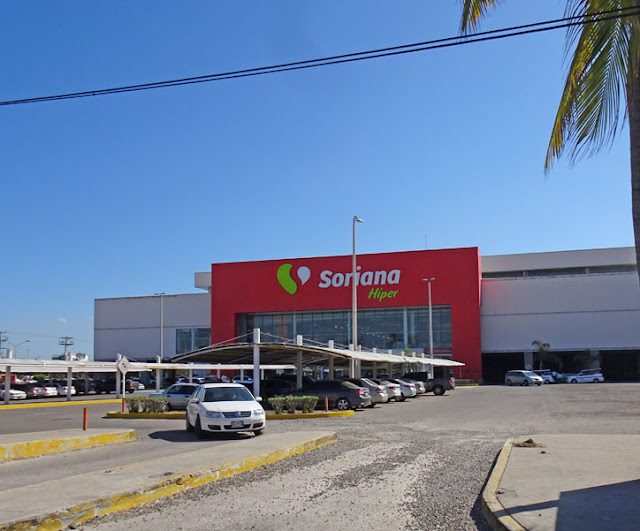 Getting sanitized and bags tagged so we don't have to pay for them again. 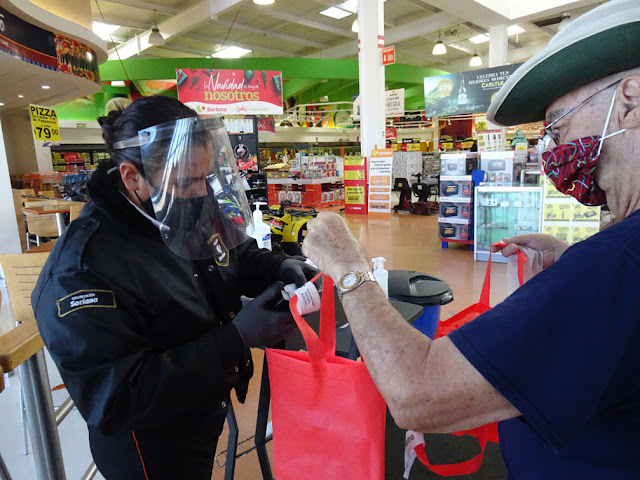 This was as of November 30th here in Mazatlan. According to everything we read and hear the rate of covid is very low here. Do we believe everything we read and hear - not sure. We are where I put the black arrow. We are being very careful, keeping away from crowed areas and always with our masks and I carry sanitizer in my purse. Also have lots of wipes in purse and car. I feel we are safer here then in Las Vegas where infections are sky rocketing. 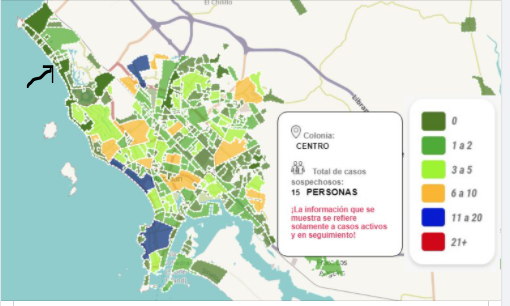 On weekend when a lot of National tourists are in town we pretty much stay in RV or if out it is just for a ride in the car. Stayed home and watched soccer games yesterday. It was a loooonnnng day. And it has gotten quite a bit cooler, didn't have the AC on at all during the day, but did have the furnace on in the evening and all night. Lots of cold wind.
Posted by Carol and Bill at 11:00 AM

Beautiful! I’m glad c19 hasn’t ruined Christmas there. I enjoy your photos and narration very much!! Thanks!

gumo- thank you for your comments