We have been having some weird weather lately. On Sunday morning the 27th the sun could not make it out of the clouds or fog. It was like this off and on the entire day. Most of the day we could not even see the hotels and condos across the street. Took this picture out of the dirty window. So we ended up staying home all day. 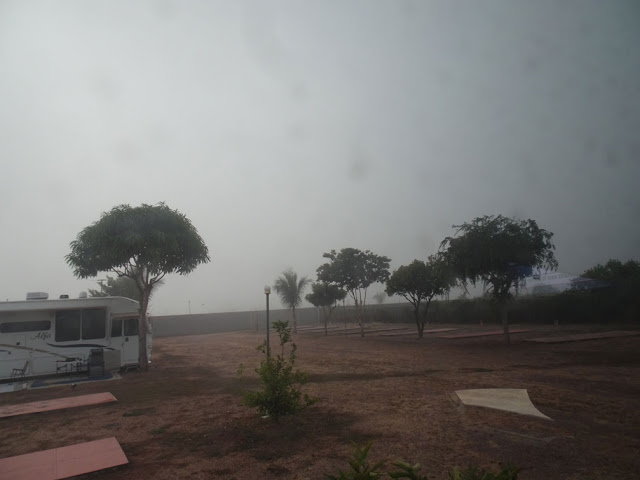 The next morning the sun was up and the skies eventually blue. So we headed out bright and early. 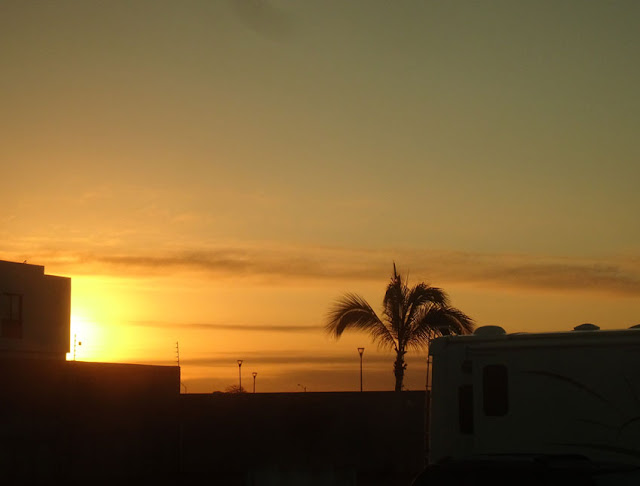 People lined up already to get into Panama restaurant in the Golden Zone. Guess we aren't the only ones who like it. 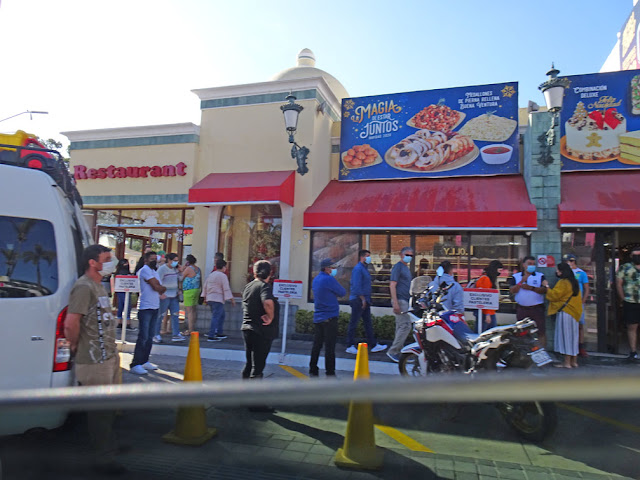 Going across the Malecon we saw the ice truck delivering big pieces of ice to the restaurants on the beach. First time we've seen him this year. 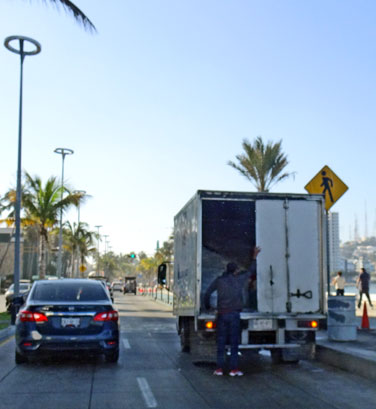 What is this you ask? Well it is another parking lot that used to be a building. 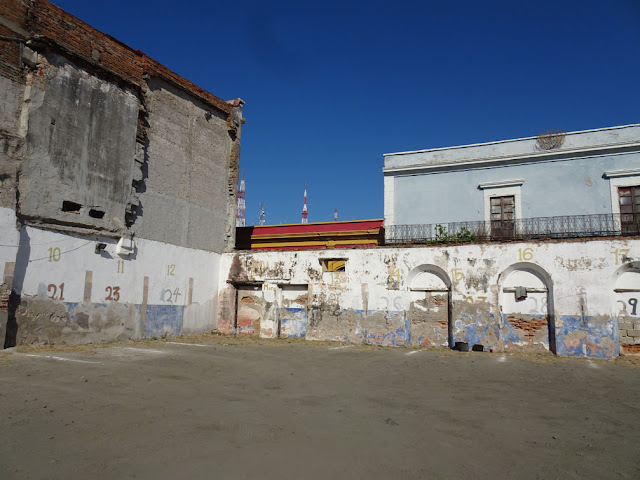 This is the outside of it. I wonder what it used to be. It did have a second floor. You can tell that from the inside. It costs 20 Pesos an hour to park at most of the lots. That is about one dollar an hour. 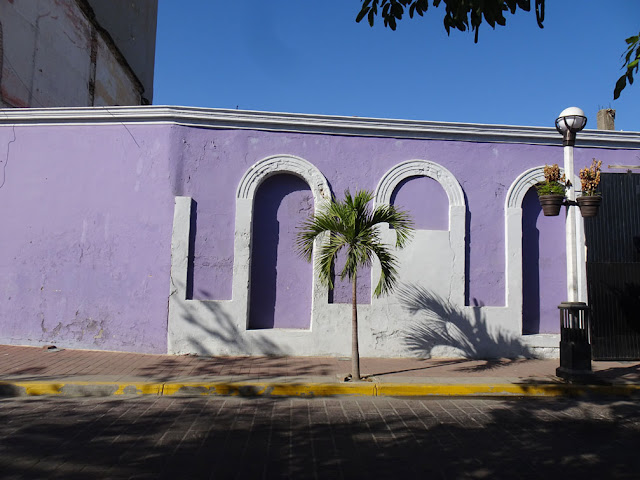 We stopped to have breakfast at Belisario. The have outside tables and are one block from the Plazuela Machado which is where we were going. Another couple from Canada also stopped by to eat. 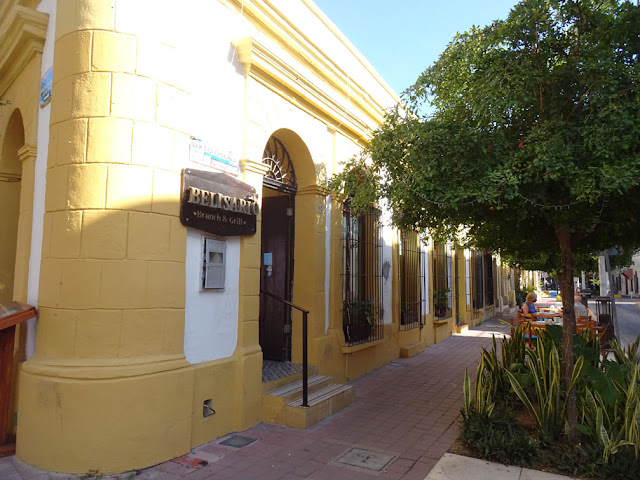 Bill's breakfast. Spanish Tortilla and salad. He said it was delicious. 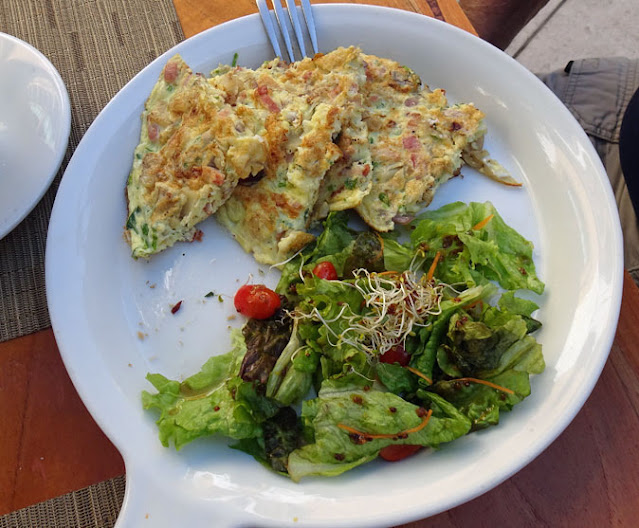 I had the American Breakfast - French Toast, bacon and two eggs. The waiter brought me one little container of syrup. I asked him for more. A while later he came back and told me there wasn't any more, he'd searched all over finding none., Glad there was at least one. 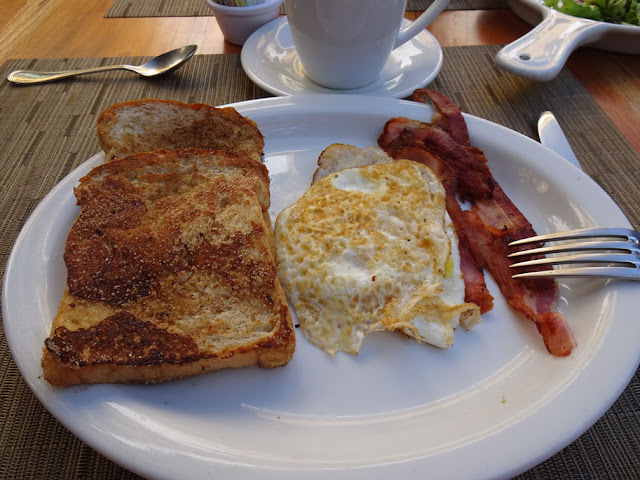 Up to the Plazuela Machado. Bill was setting up his drone to take it up and take pictures. This used to be La Boheime.. Haven't seen it open so don't know if it looks the same inside as it used to. 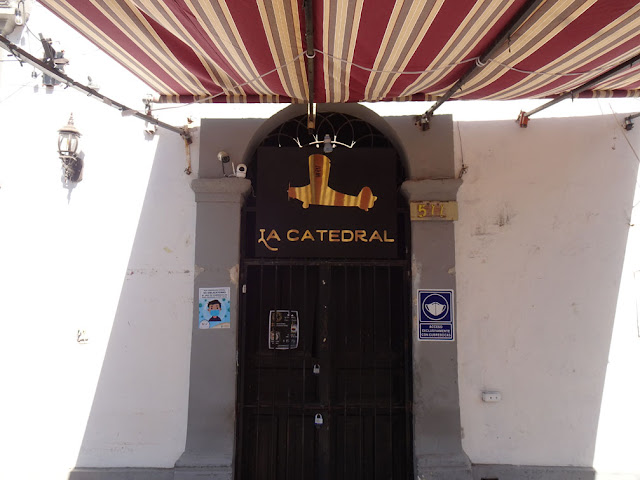 And this is to the left of it. Can't remember what it used to be, but not this. 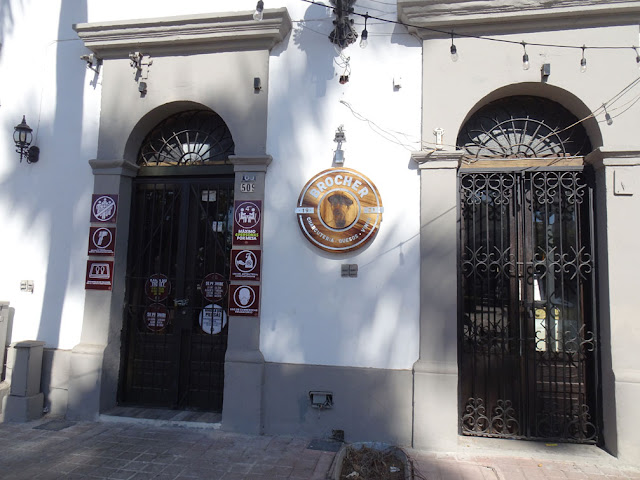 Their rules to eat there, no crowds, take temperature, walk through sanitizer, Only 4 people at a table, use the sanitizer and wear a mask. One of the signs on the door says something about a ticket, another says you can't bring any food or beverages into the placer, No alcohol drinks to minors. And the white one gives a phone number for information. Wow - hope I see it open one of these days. 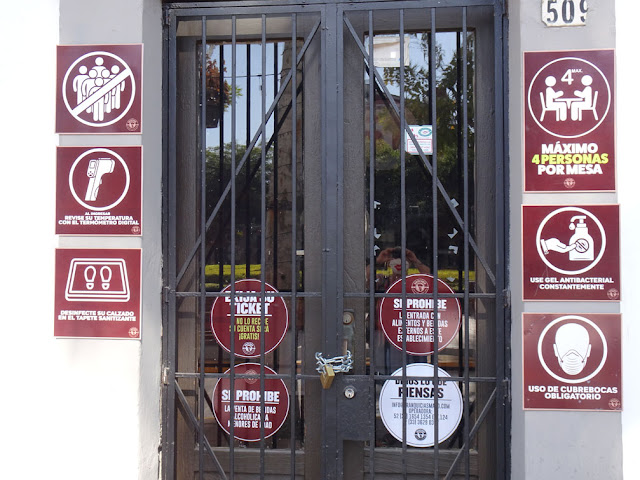 The drone is almost ready to go up. It is a DJI Mavic Pro Zoom. 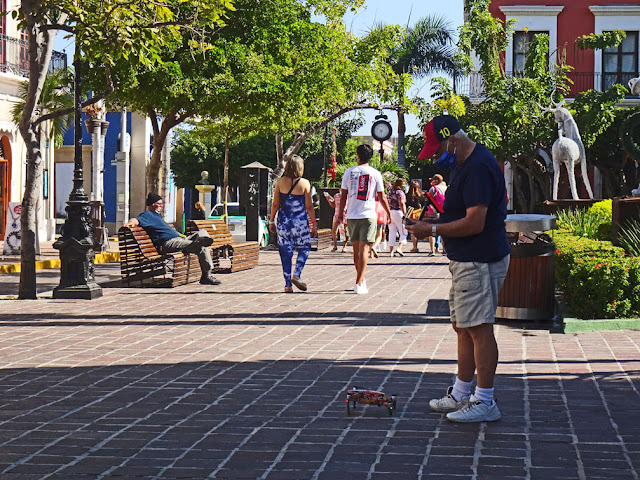 The pretty Christmas flowers have dew on them that looks like gold sprinkles in the sunlight. 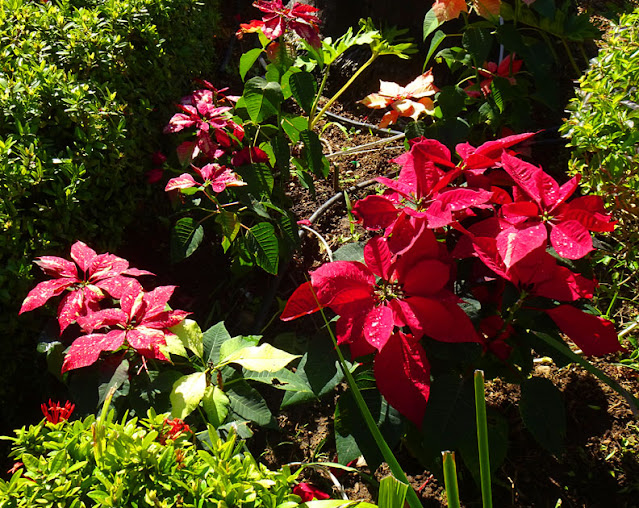 The video Bill took - a 360 view of the Plazuela. It has music if you want to listen to it. Click here to view in full screen.
The gazebo with it presents and wreaths. 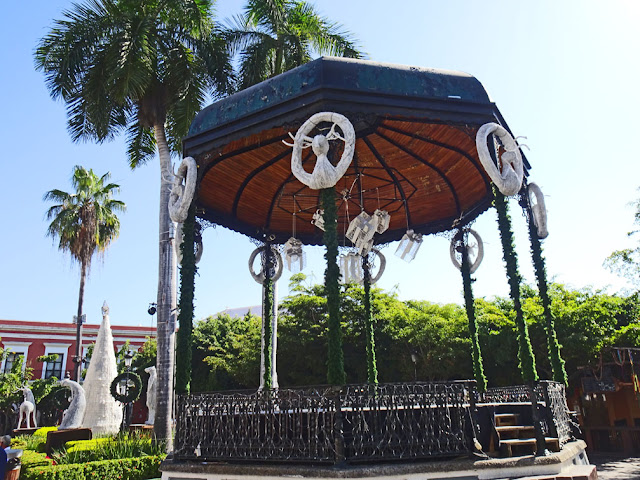 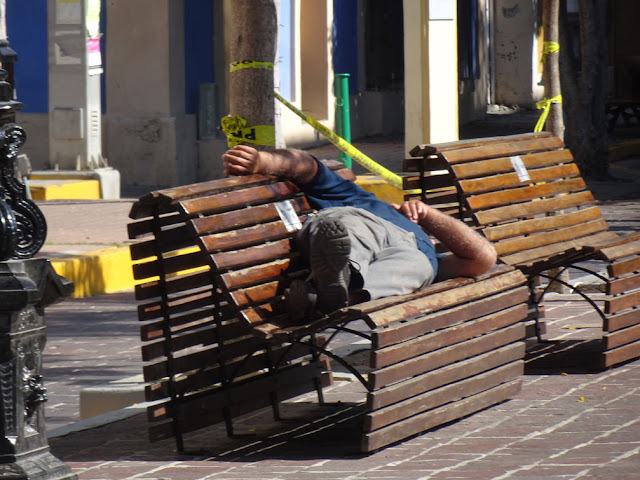 The drone up there doing its thing. 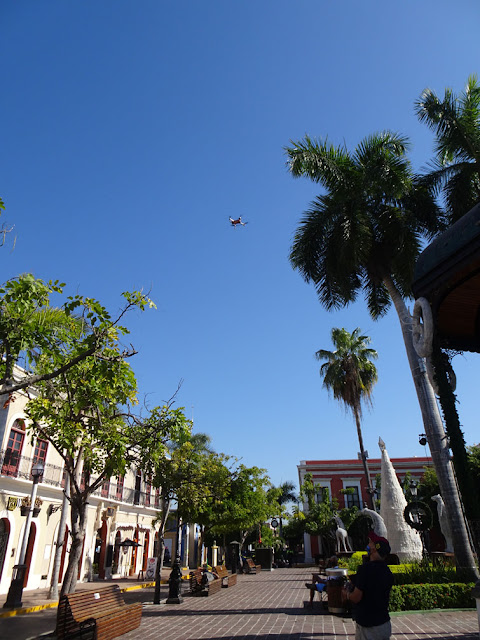 On the way back home. Finally after many tries I got a photo of this pretty package in one of the parks along the Malecon. 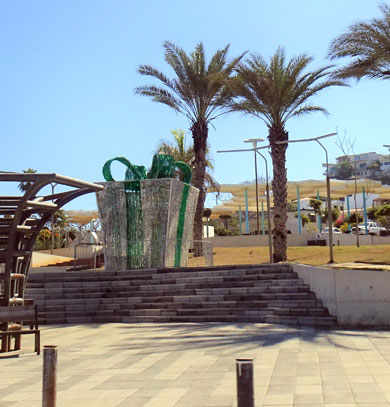 Here is that new mural painted on the side of a building - home I think. There is a lot of detail in it. Hard to take a picture of especially when moving. Lots of poles and wires in the way. 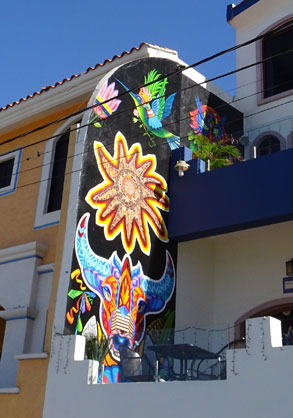 Maintaining the plants in the center divider. Be careful when driving here. 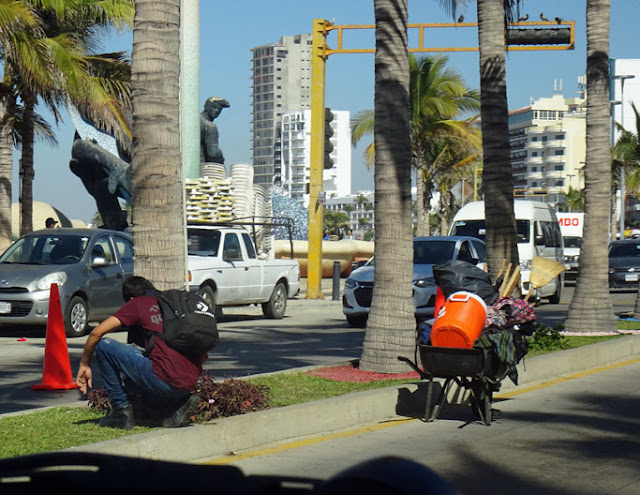 Yesterday had a few interesting turns. We knew - at least the weather report said - it was going to rain today. So in the early afternoon we decided to do a WalMart run. When we got there I went to open  the back door on the Jeep to get our bags out -YES actually remembered them. But then something looked weird - yes very weird there was NO WINDOW in the window. WTH? Neither of us had put the window down. So stuck the keys in the ignition and turned it on. Pushed the button to raise the window. Nope...Not so much as a click. So I hollered at Bill who for some reason was talking to someone in the car next to us. [Turned out is was the doctor he saw last week, who was wondering how Bill was feeling. Small town.] Amy way Bill tried the keys, ignition, button. still nothing. Well sure can't go to store and leave Jeep wide open. So he tells me to call the mechanic - guess who didn't bring the phone. I ALWAYS bring the phone, but not this time. So got home and called mechanic [remember it was going to rain overnight!] Mechanic said he'd be there in an hour. He was. Took quite a while to get it fixed. Well not fixed but the window is up and will stay up. Fixed so it can't go down. So now neither window in the back can go down. [sorry Mark.] So by then it was about 6:00 we decided to go to WalMart. What a bad decision. The traffic was terrible. We were stuck at an almost standstill for ever. Finally made it to the roundabout where we turn east to go to WalMart - well we just went on around it and headed home. Almost every car was from out of town. Gad.
So this morning when I got up the sun was trying to come out. So where was the rain? 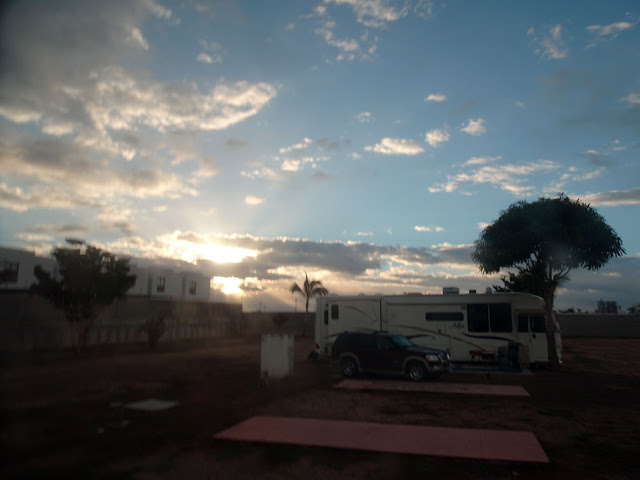 About 45 minutes later the rain was here with lots of wind and heavy rain for about an hour. 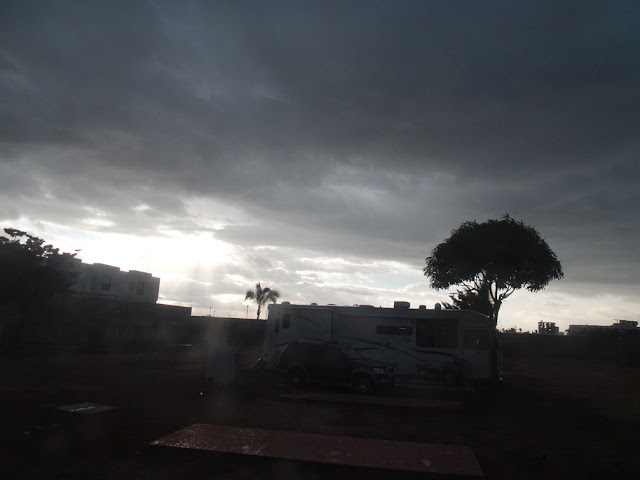 When it stopped we went to WalMart. Don't want to have to go tomorrow or next day. Then home and now it is pouring again. Heavy heavy rain and wind. Hope it doesn't flood like last year.
Watching soccer games and reading now. The furnace is running off and on. Supposed to be quite cold here for a couple of days.
Posted by Carol and Bill at 10:57 AM

Oh well I will be just fine, so it was the passenger side that broke??. Glad you didn't get flooded out like last year, but it would be funny to see another picture with Bill wearing trash bags on his feet.

yep , passenger side. Just slid out of sight.
Not enough rain to do any damage, just make the bushes clean and the car dirty. Call or text us when you get in. Bring lots of masks.