Home most of the weekend except for a couple of short rides. Watched soccer games. Barcelona's team are playing like a bunch of kids in a field. What a shame.

So there are some random shots of Mazatlan. Driving into Centro we took a street we don't usually go down. I didn't take too many pictures because I thought I'd post some videos from the dash cam. Well that didn't work out. I'd put a 16gb memory card in it by mistake and it overwrote all the good footage. This street has many big old trees on it. 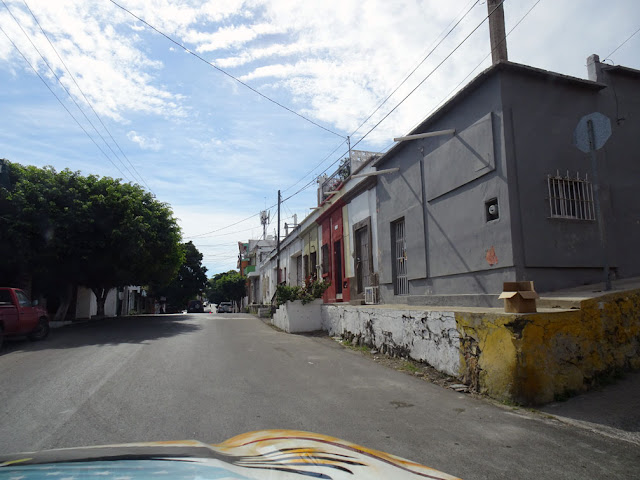 And there was just enough dirt on the windshield to make the pictures hazy. 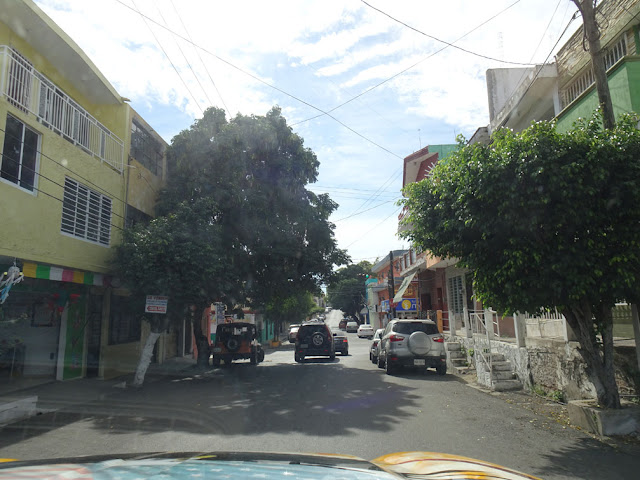 As I write this I'm we are listening to the news from Las Vegas. Snowing in the mountains around the city. Only 40 degrees out. In fact some snow flakes actually fell in town. Also yesterday there were two people in two different areas were shot and killed. And the covid rate is way up and still going up. Glad we are here.
Back to Mazatlan. This is the wall around an elementary school. Moist of the elementary schools have paintings on the buildings and or the walls. 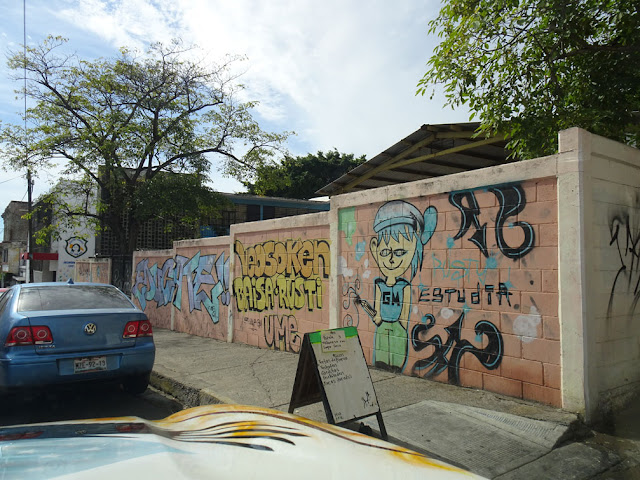 A typical scene, restored buildings and buildings that need TLC right next to each other. The central area of old Mazatlan is a very hilly area. So the sidewalks are all different heights. 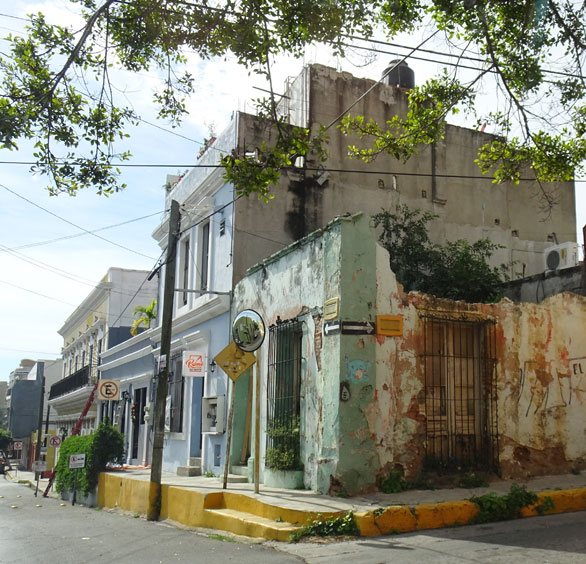 We had been driving up and down some VERY NARROW streets looking for a certain building. When we found it it was closed, but it was also just around the corner from the bakery. So Bill pulled into the only empty parking spot on the street so he could run into the bakery. The parking spot was clearly marked. For the clients of the Benitez Torres [the mayor of Mazatlan] Clinic. But now the clinic looks like it is being remodeled into a house. We know the mayor, but wonder if telling that to a tow truck driver would have made a difference. Luckily no one came by to enforce the No Parking. 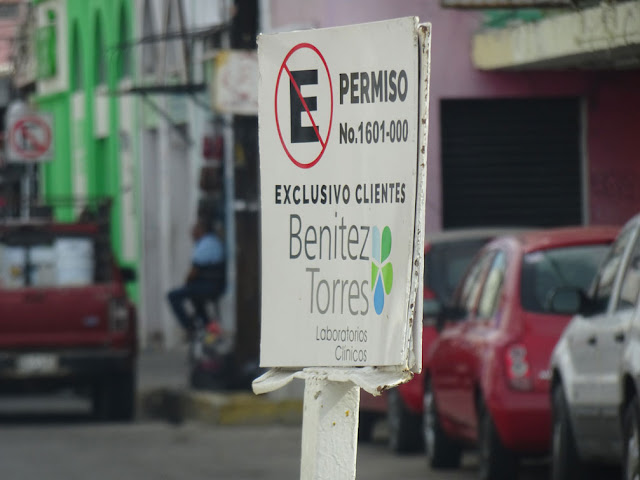 The building on the left was restored a couple of years ago, don't think it ever had any occupants. It is for rent. 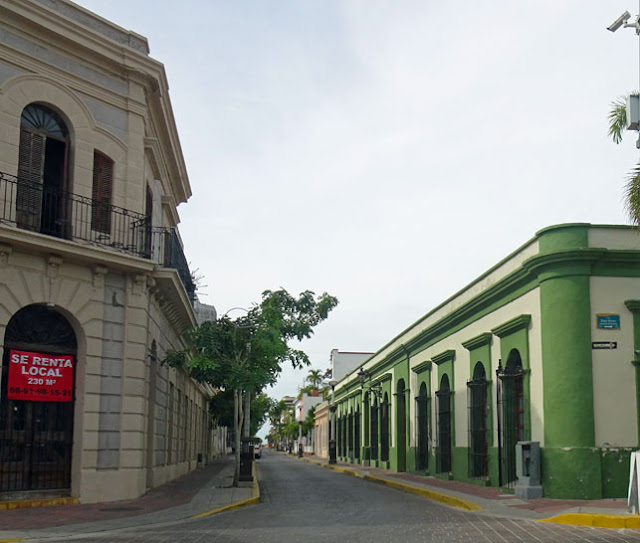 Another empty bricked up building. 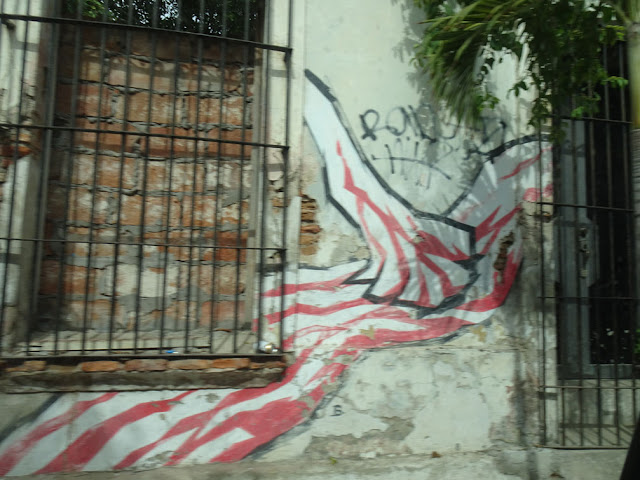 The area where the divers dive - can see the platform behind the light post on the left. Nothing there on a Friday afternoon. No tourists or vendors. And no parking allowed next to it any more - bicycle path now. It is so sad. 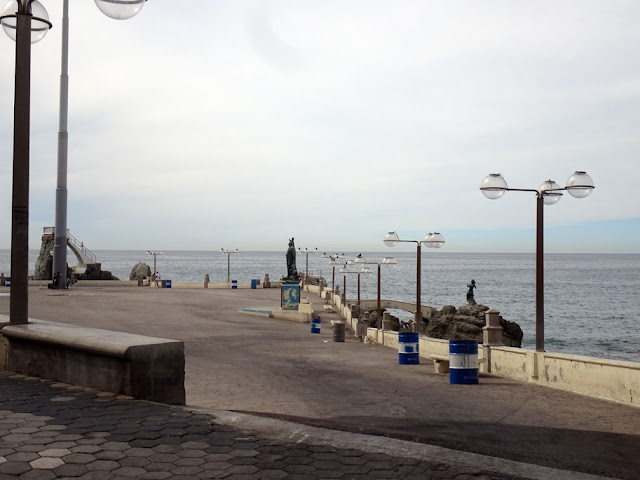 The mural is done it is on the restaurant at the Hotel Belmar. 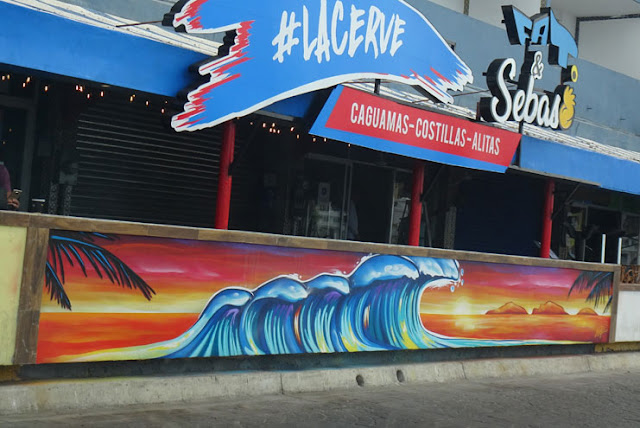 I wonder what that wire is for? No parking allowed on this street. 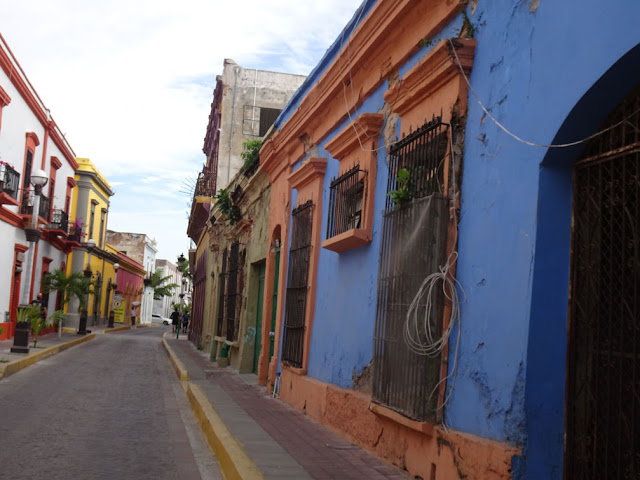 The windows are bricked up to keep people out. 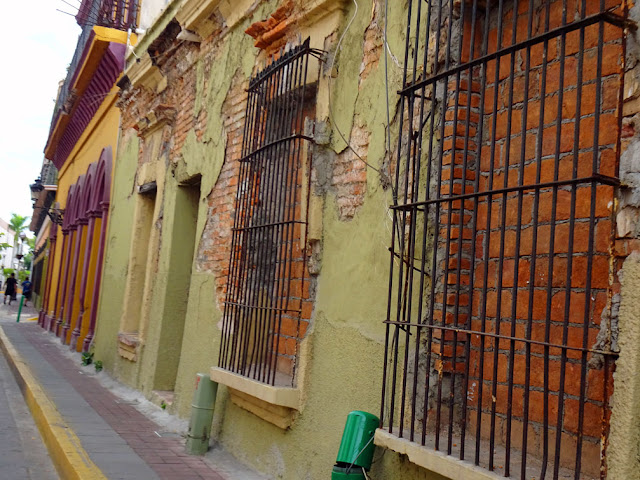 Went by Via Condotti restaurant, looks like it is open. Another place we can eat outside. 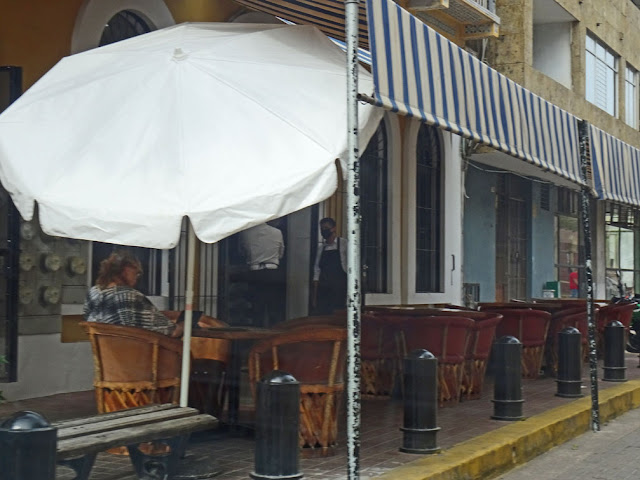 This has been repainted since last year. 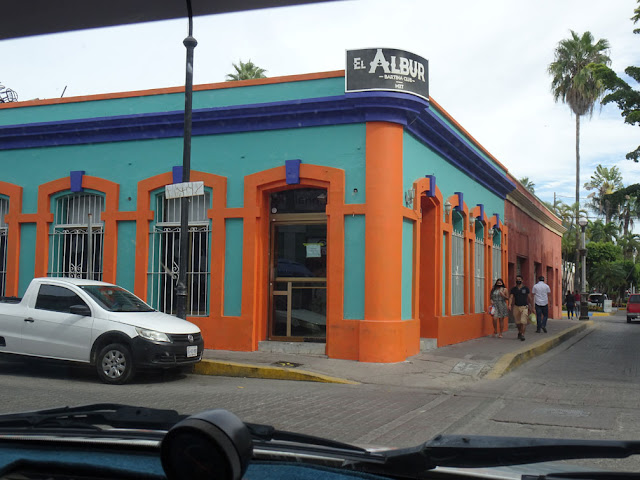 All the benches in the Plaza are occupied by older men. 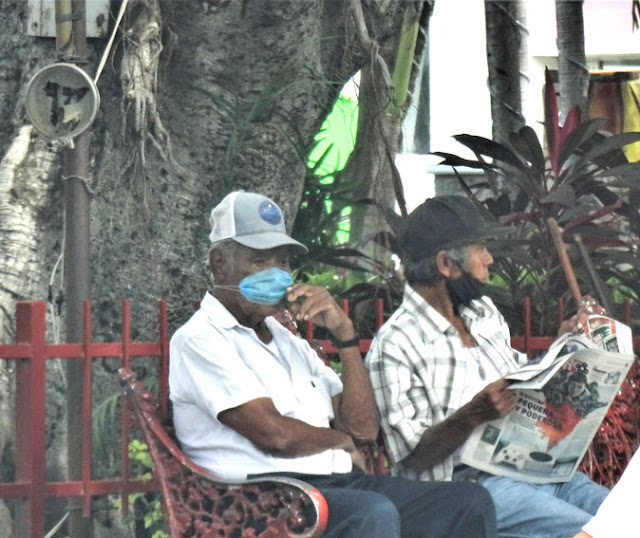 This guy had a bull horn and was telling every one he had tamales for sale. Tamales that were made with pork or chicken. Not beef as it was Friday, the day before the Virgin of Guadalupe day. Ok! We could hear him way before we could see him. 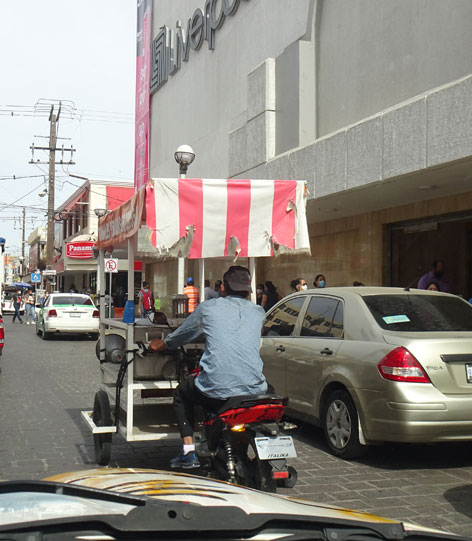 Tourists doing what tourist do. 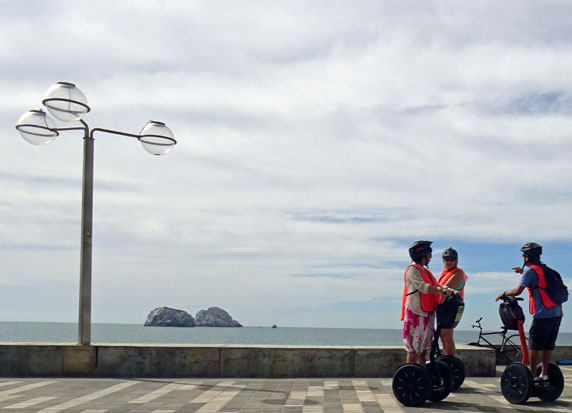 Bet this is pretty at night. In Olas Altas. 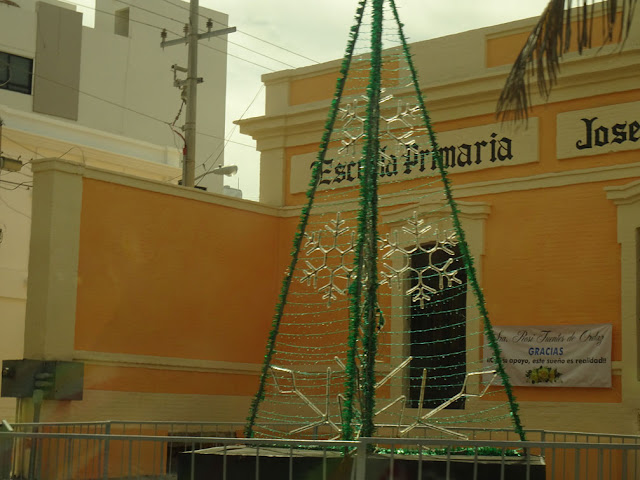 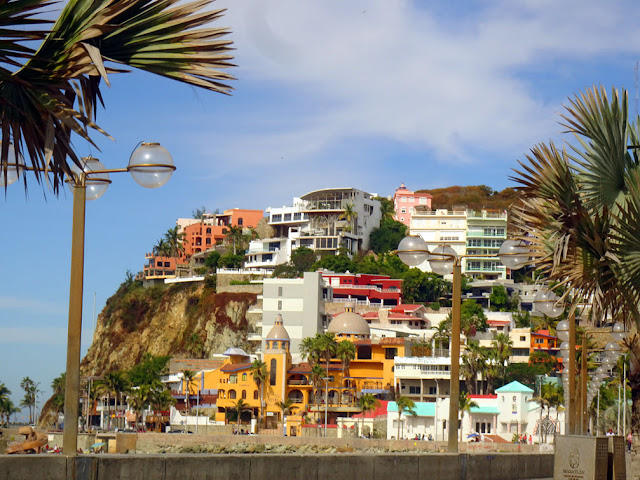 Still listening to the news, Nevada has an unemployment rate of 30% - due to the gaming and hotel limits on occupancy - only 25%. No fire works for New Years planned for the Strip. The news from home is depressing.
Just liked the picture so sharing it. . 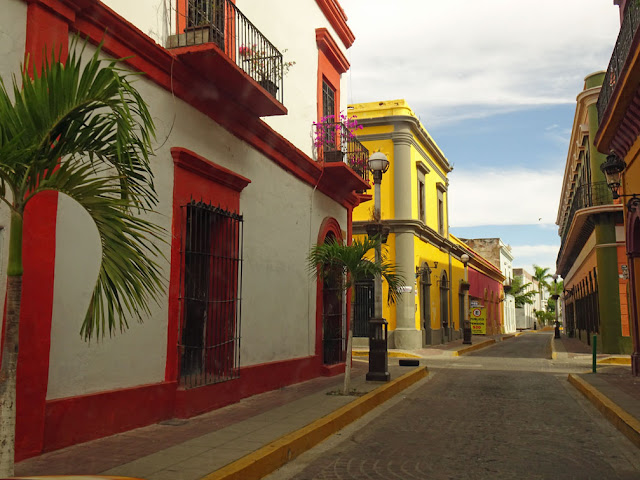 In case any one was wondering The sausage place, Will check during the week to see if it is open. 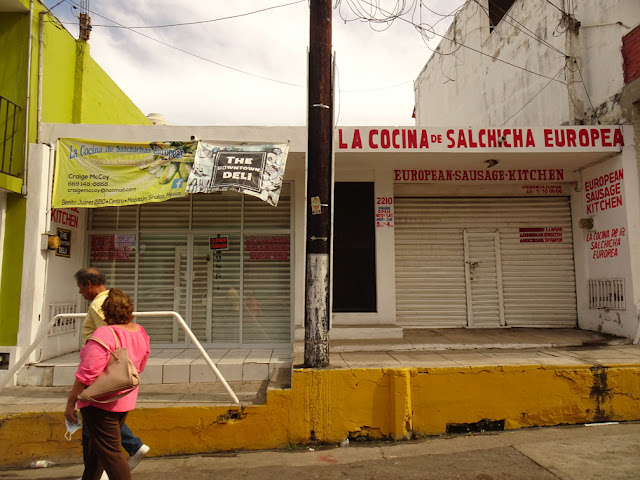 They were cleaning fish here. 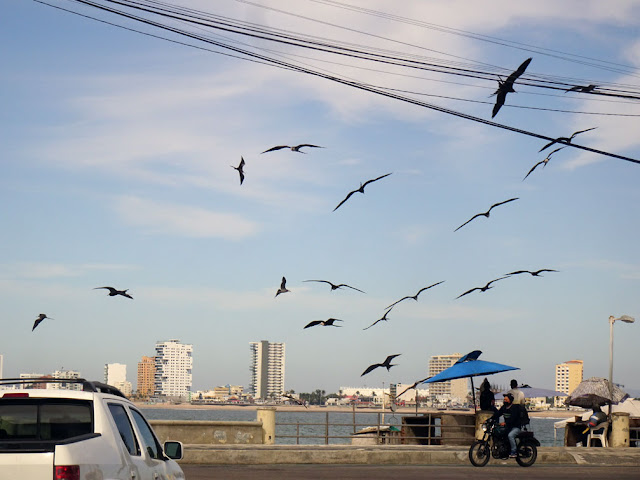 The yellow area points to Valentinos - It used to stand out. Now the sky line is really changing. And more high rises coming. Soon it will look like Miami. 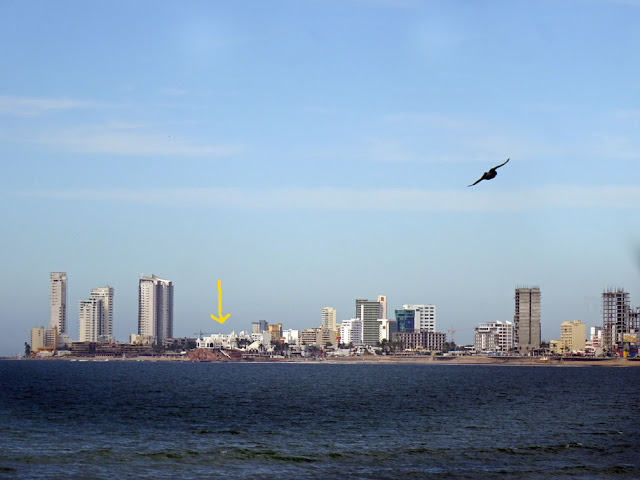 The Senor Frogs in Golden Zone. It used to have windows that had water falls in them. Got remodeled over the summer. 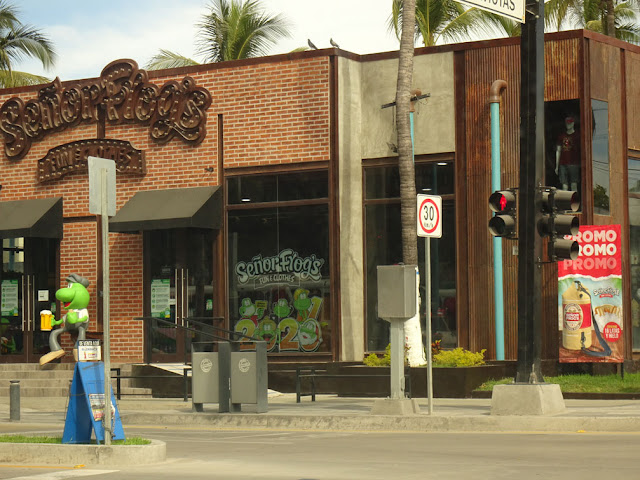 So what are we going to do today? I don't know - but I don't have any more pictures to share. So have to do something. Also have errands to run.
Posted by Carol and Bill at 11:24 AM

Your blog is such a great diversion for me to enjoy! I love your narrative and your beautiful photos and videos. I can’t travel so your blog is my travel! Thank you!!!!

gumo - so glad you are enjoying the blog. Hopefully I can keep it interesting.