I know it is a day late, but I liked it enough to share. 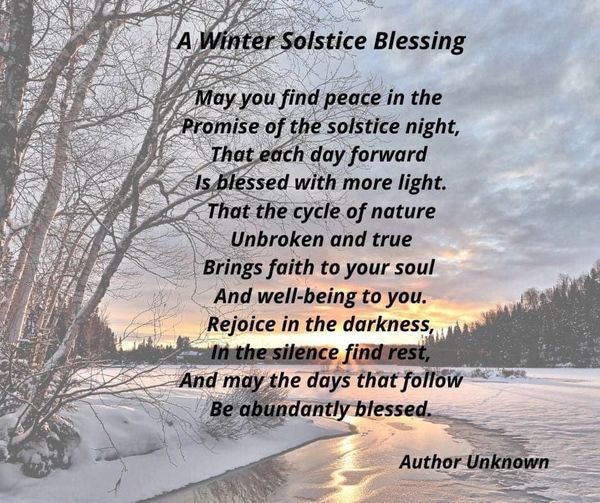 Not much of a sunrise on Dec 21st, but thought the contrails were neat. 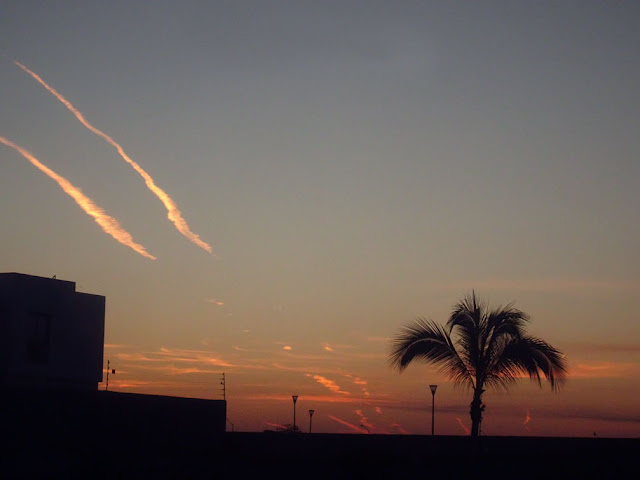 We had something to deliver to a friend at La Martina so we set off about fifteen to nine. We've passed this tree several times but this time I remember to take a picture of it. Bill was kind enough to pull over and stop so I could get a good picture. It reminds me of a tree decorated for Christmas. 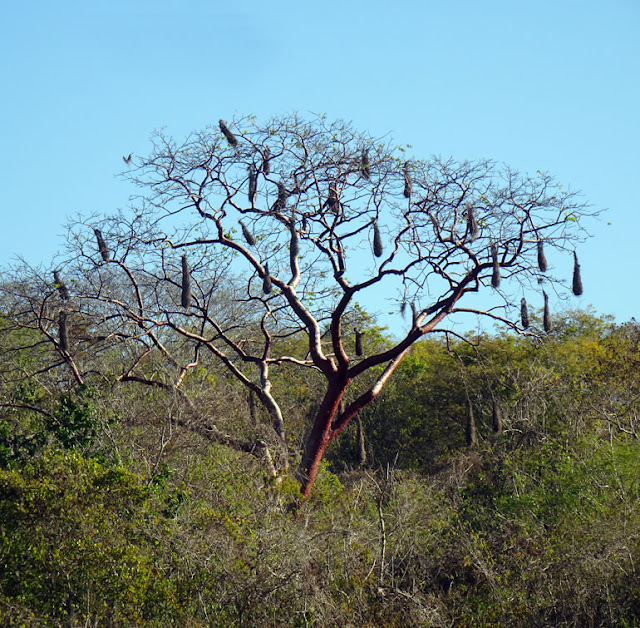 The highway widening is moving right along. Almost ready to finish it. 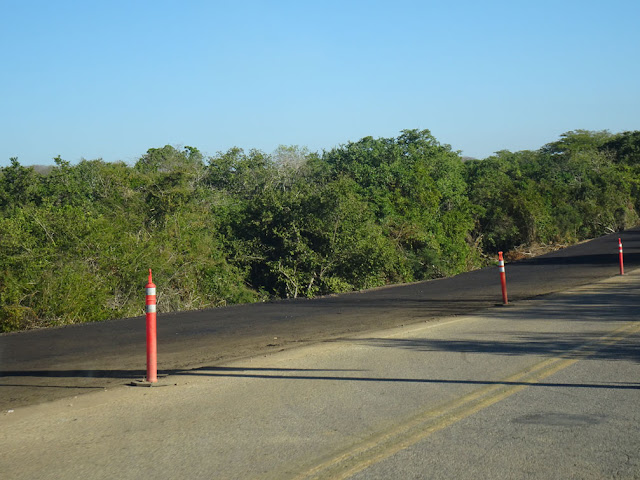 On the road to La Martina we passed this truck guess he'd already delivered his milk. These cans would cost a fortune in the states at an antique store. I know, I have one. 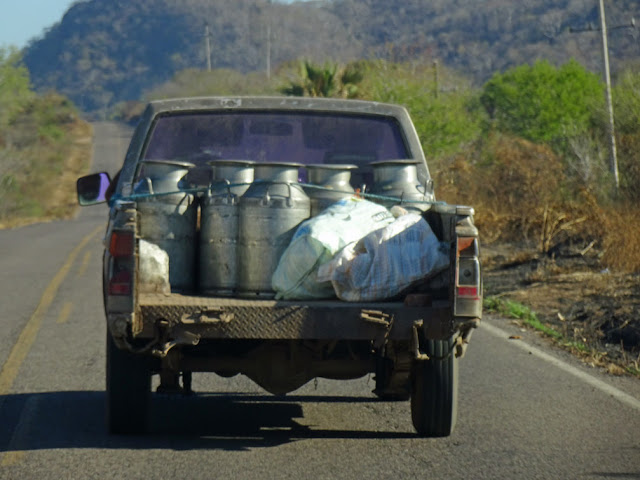 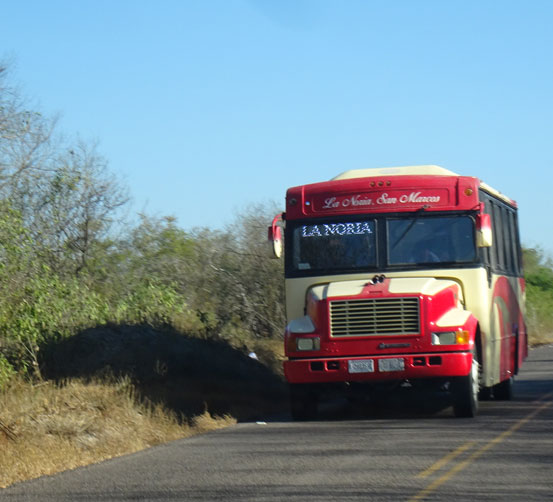 This scene reminded me of Tioga George and how he always mentioned "the tree tunnels" when he was in the Aticama area. I still miss his blogging. 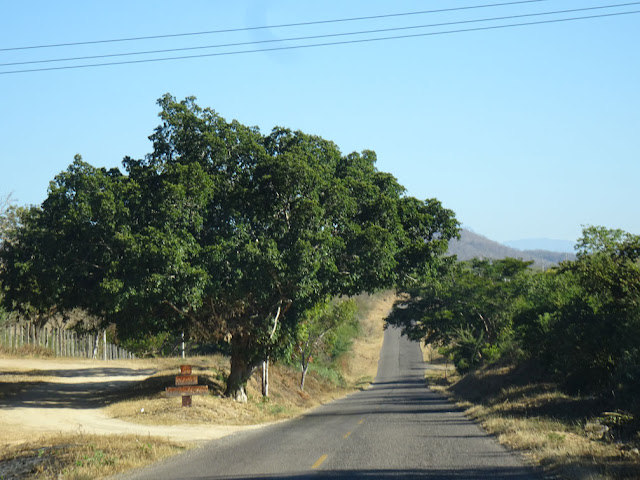 Just before La Martina - he is weeding the agave patch. 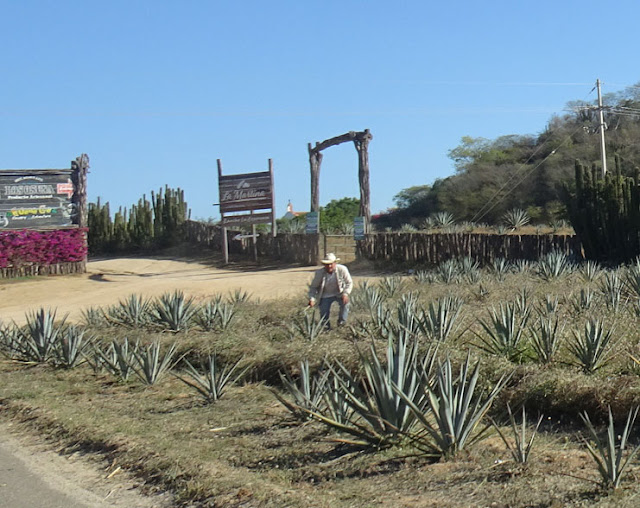 One of the multi colored bougainvillea on the driveway. 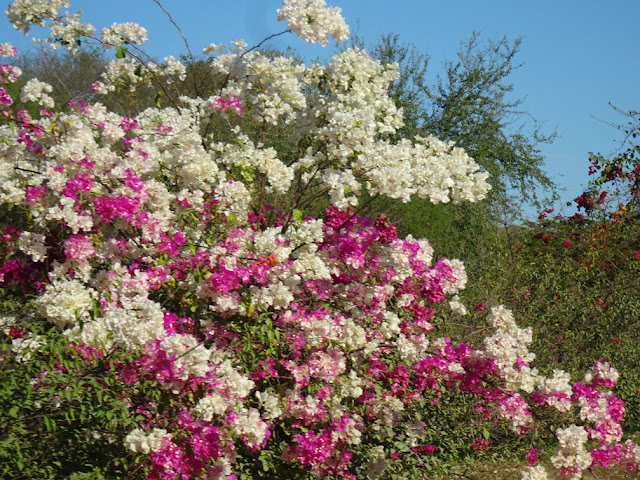 Here is a short video of the driveway into La Martina. Beautiful flowers on one side and the big cactus fence on the other. After we make the turn notice the chapel up on the right on the hill. Click here to view in full screen - or not.
The restaurant is decorated so pretty. I've taken so many pictures there that this day I just enjoyed my meal and the people and the ambiance. 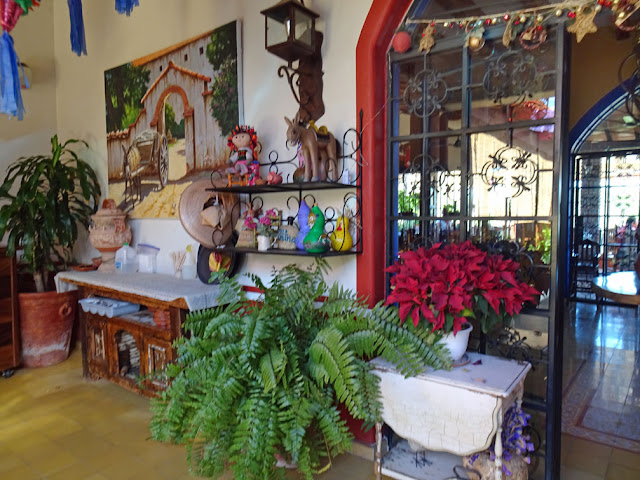 Lots of colorful papel picado [pecked paper] hanging over the patio. It is so pretty. Info about it. "It is a traditional folk art decoration made out of tissue paper and used to decorate the streets, plazas and churches of Mexico during holidays such as Independence Day and Dia de los Muertos. Traditionally, papel picado is created with a sharp chisel that perforates 40-50 sheets at a time." Would be interesting to see it being made. 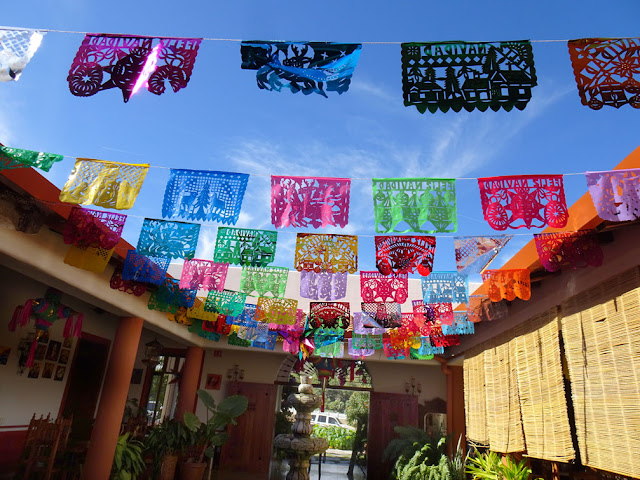 Another tree just starting to bloom. 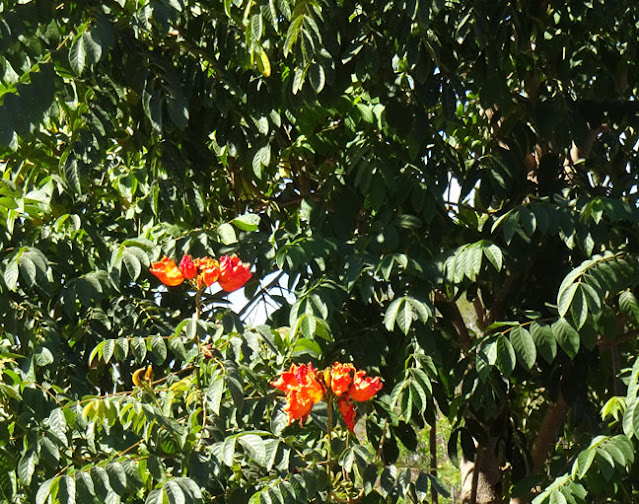 After leaving La Martina we continued up the road to La Noria. 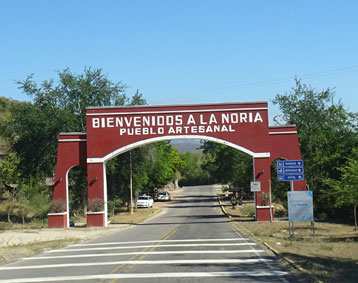 This is a new memorial beside the road. Quite elaborate. Can't help but feeling sad for the family. 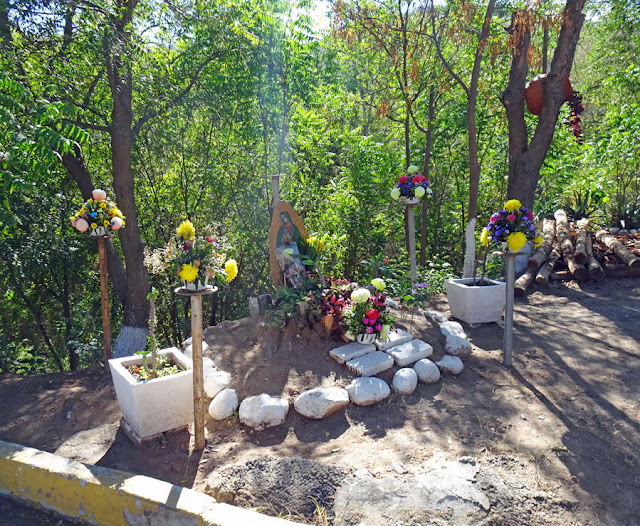 A different tour truck. Hope they are able to keep busy. 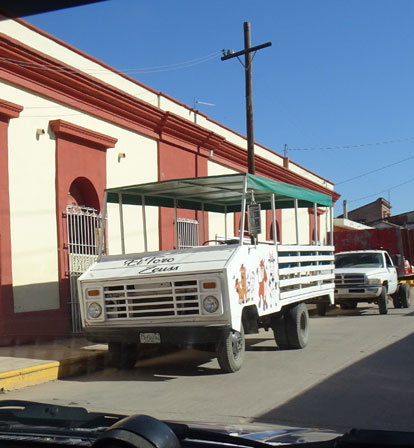 Just some pictures of some of the homes and  buildings. 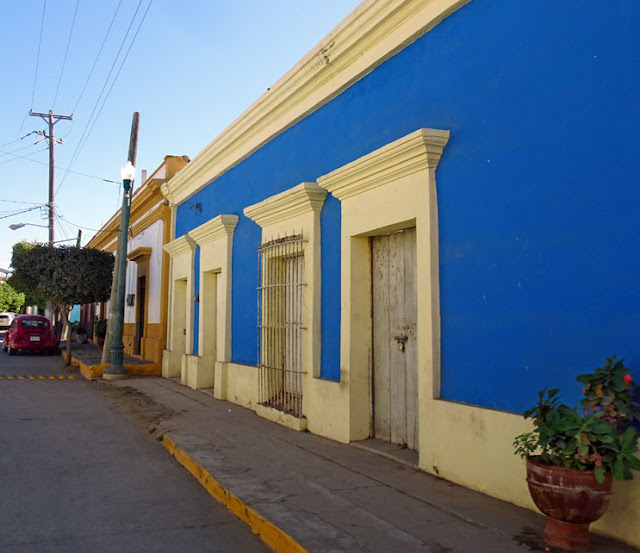 The dash cam was running when we made the loop through town. You might find it interesting. It is about five minutes long. Will add it at the end of the blog. 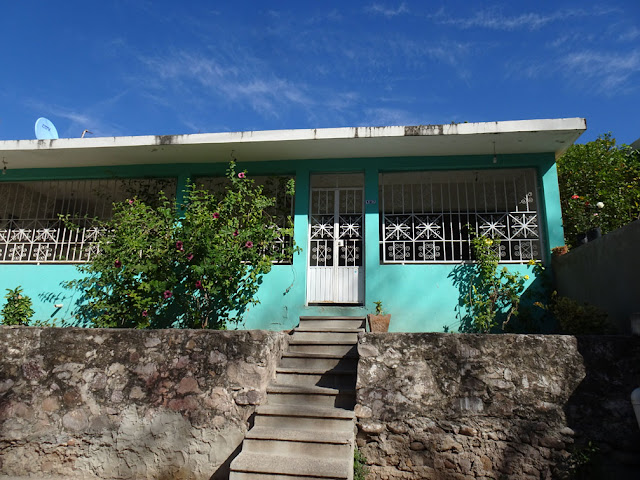 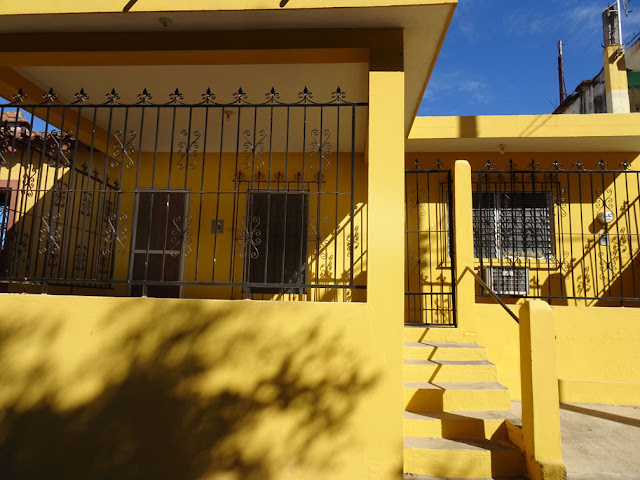 You might notice near the end of the video we pulled over and stopped to talk to the blacksmith - he had some very sad news for us. For years we've been going to La Noria and one of the highlights was going into this leather producer. His is the place where we could go into the back to see the old barracks of the revolutionary troops. We found out that Antonio - the man sitting behind the counter - had just passed away of Covid the day before. He was only 53. When we stopped at the shop about three weeks ago, he wasn't there but we were just told that he was in Mazatlan. The man on the left is his father. So very sad. 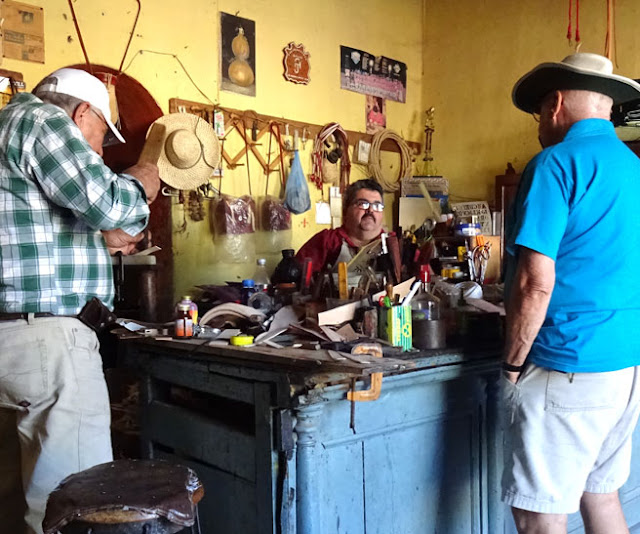 Our thoughts and prayers are with his family and friends.
Just going out of town passed this man and his horse. 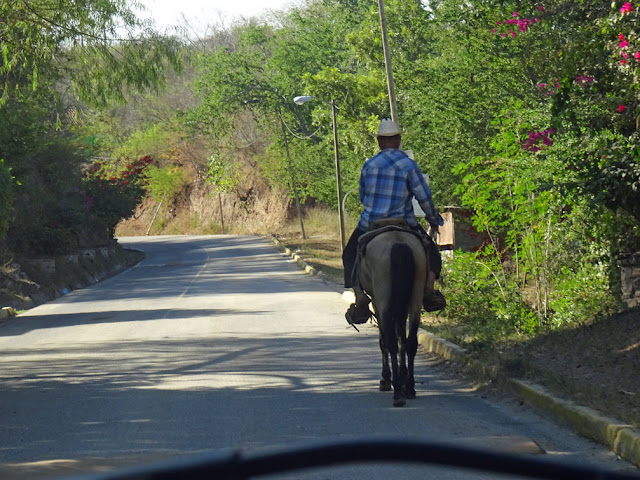 These same older men are almost always sitting on these steps. They always frown at us but then wave and smile. 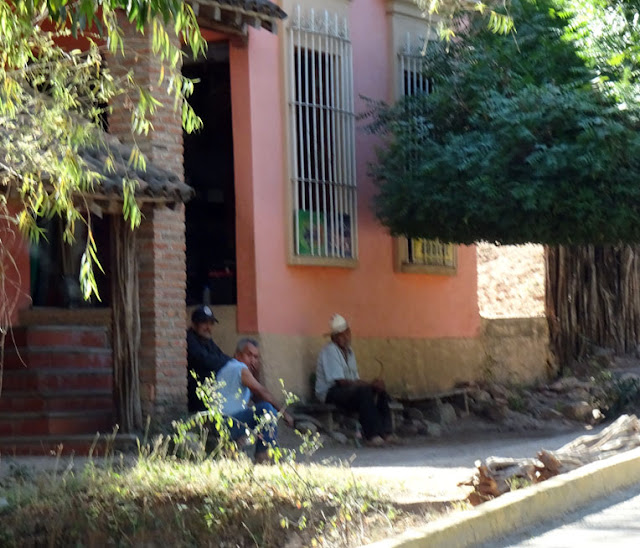 The video. Click here to view on full screen. There is sound.
There is now another RV here in the back with us. It is an Alfa like we used to have. There are many, many tourists, Mexican, in town and traffic is horrific.
Posted by Carol and Bill at 2:51 PM

Thanks for the tour! Met the guy in the leather shop a couple of times..sad for the family.

Kind of sobering when it is some one you know.

Tough hearing news about someone you know being taken by COVID. Sorry for his family's loss.

I got some of the papel picado in Guadalajara a few years back but it was made of thin plastic (I guess weather resistant). Unfortunately, I thought I would like the true Mexican flag colors so I bought the green, red and white but now it just looks like Christmas! Wish I had the pretty colors. Have to get some when we go back down there.