Jut forgot to post yesterday, or too lazy...
One afternoon when the wind wasn't blowing we drove up to Cerritos beach to watch the waves. We got there too late to watch the fishermen come in. But there were a few tourists wandering around. The tide was also in. Last time we were here the tide was out and all the rocks were exposed. 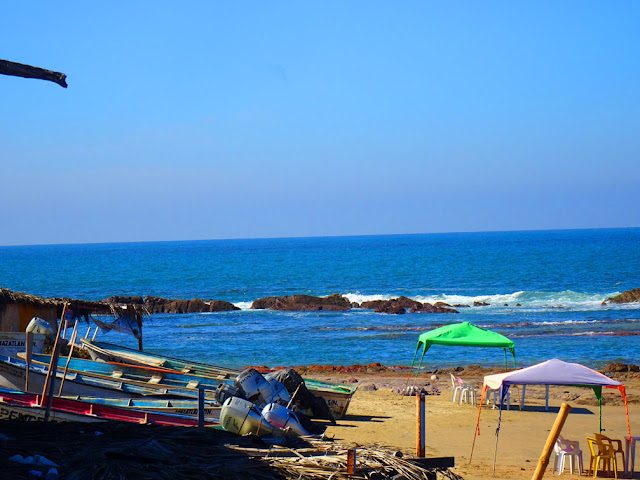 Some one has a sense of humor.  A little alien on the beach. 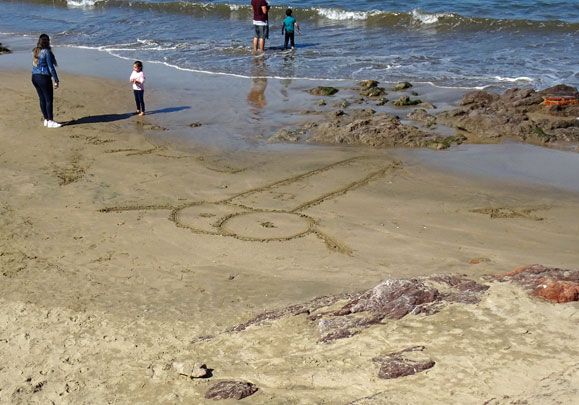 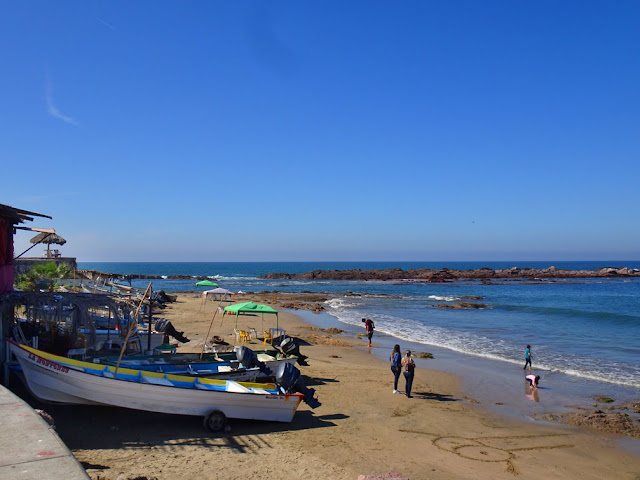 bill took the drone up for a bit. He was enjoying the ocean. Kind of just flew over the little stores, boats and RV park. Look quick to see them.  Click here to see on full screen.
As we were leaving we saw a whole bunch of people arriving. 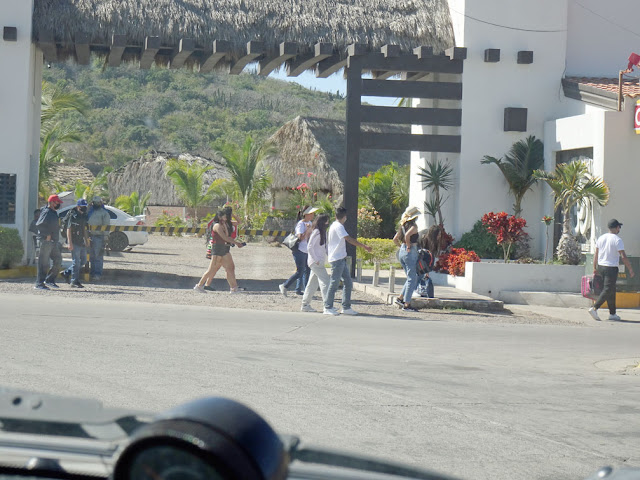 Discovered a lot of cross country busses had just arrived. Big groups of people getting off to explore the area. 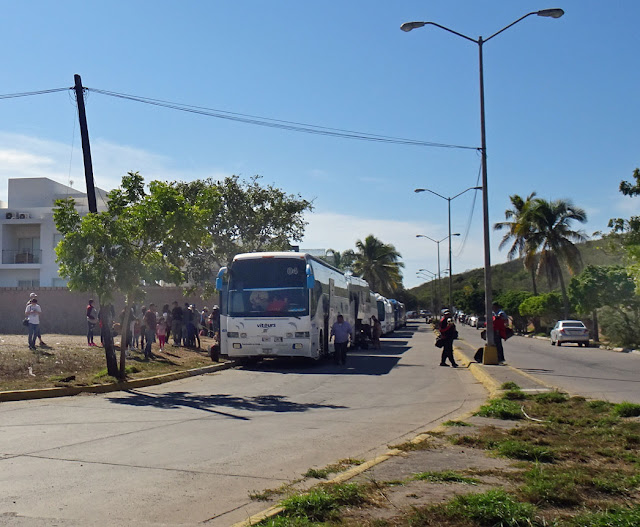 He sees his chance to make some money. 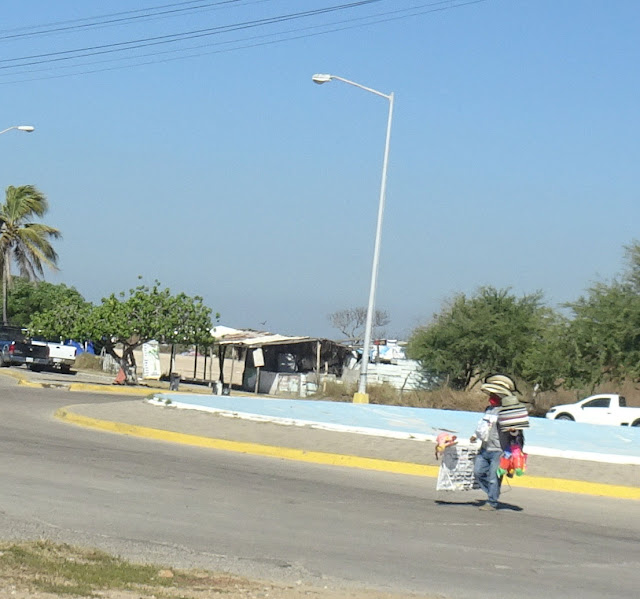 There were about ten busses parked along this road. 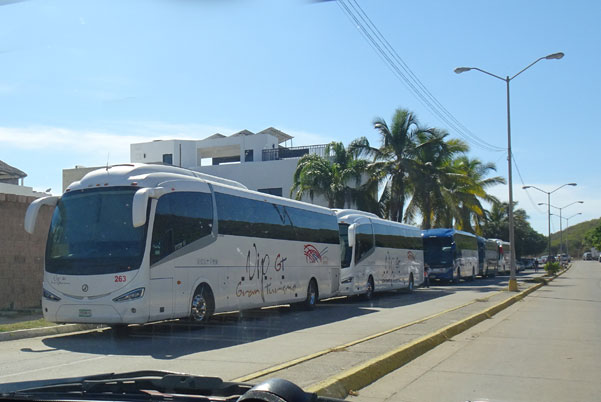 We saw some people sitting on the center divider. The girl on the end is getting her hair braided. 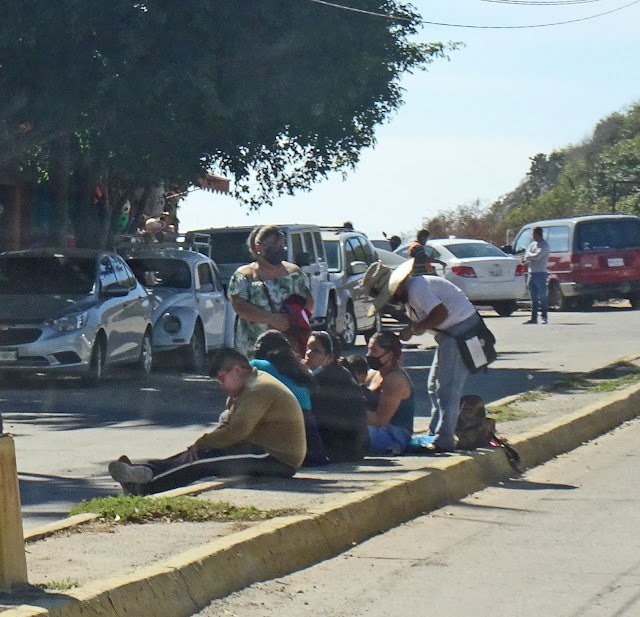 Have not been to this restaurant this year yet. You can eat right out on the beach if you want. Lots of little shops have been built around it. 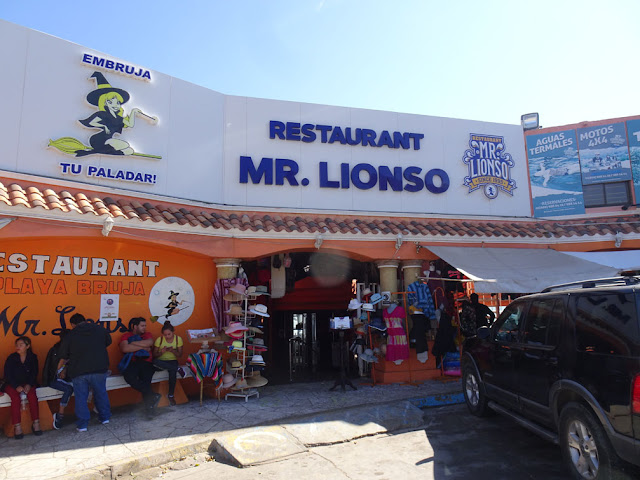 A closer, but not clear picture of the hair braiding. It is a guy doing the braiding. 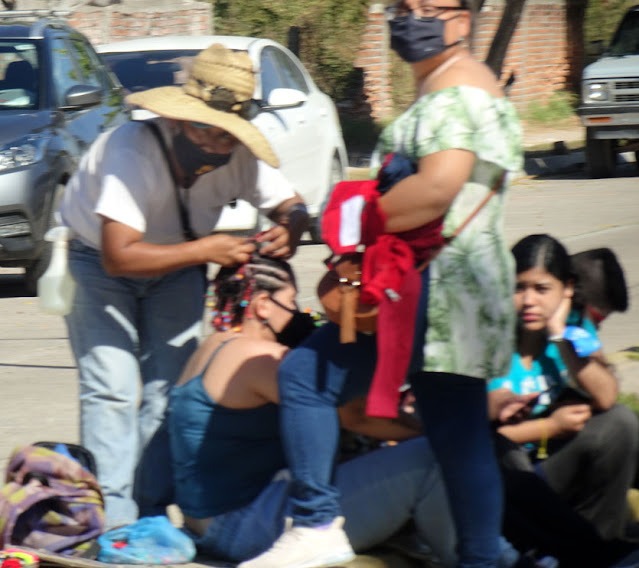 Another look at the busses. Hope the people went shopping and eating, the area really could use the business. 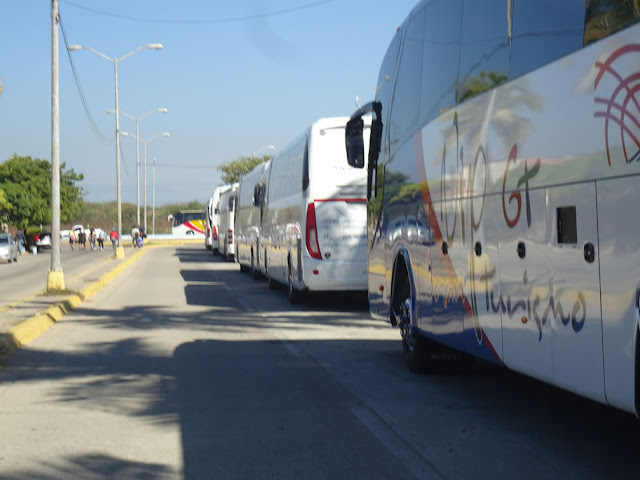 Looks like they have luggage with them...There are some hotel rooms here, but not too many,. 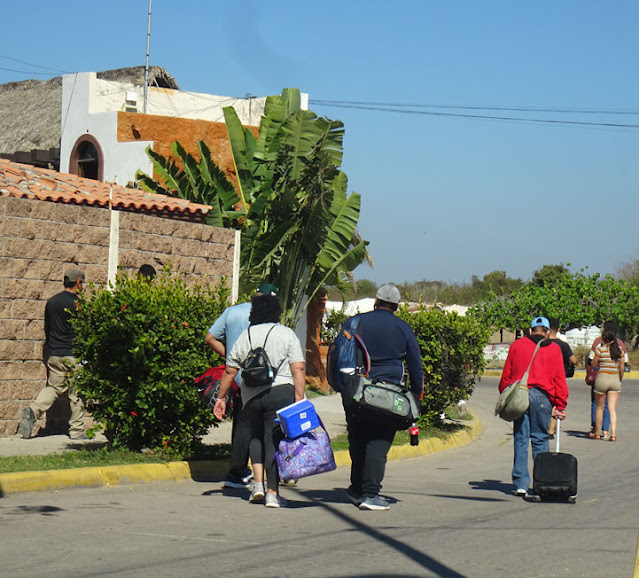 WOW - it always amazes me how these bus drive can maneuver these huge busses around this own. He made it without backing up. . 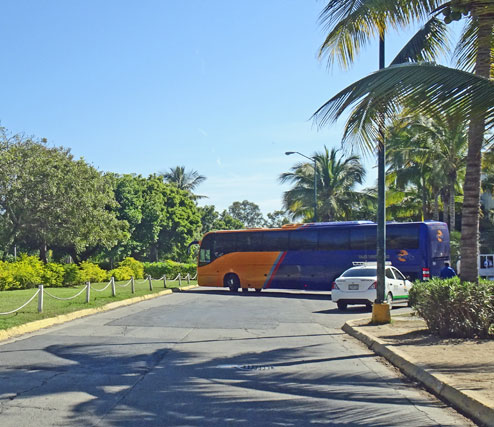 This day the area of water by the Rui was full. A week or so ago when we were here it was almost empty. 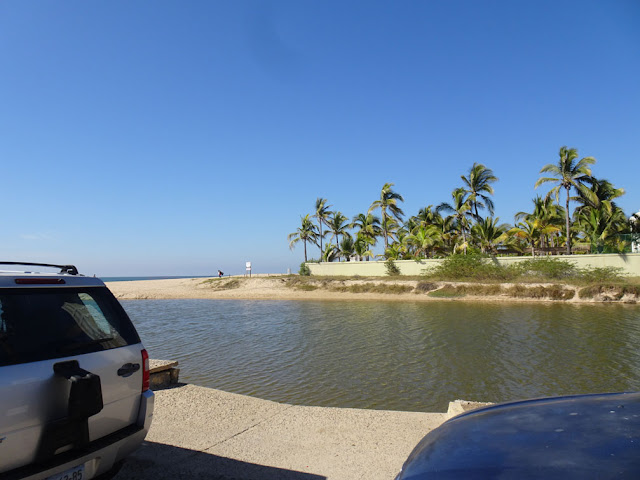 Before going home we stopped at the produce shop to pick up a couple of things. It is really nice, small but has a good selection of fruits and vegetables. 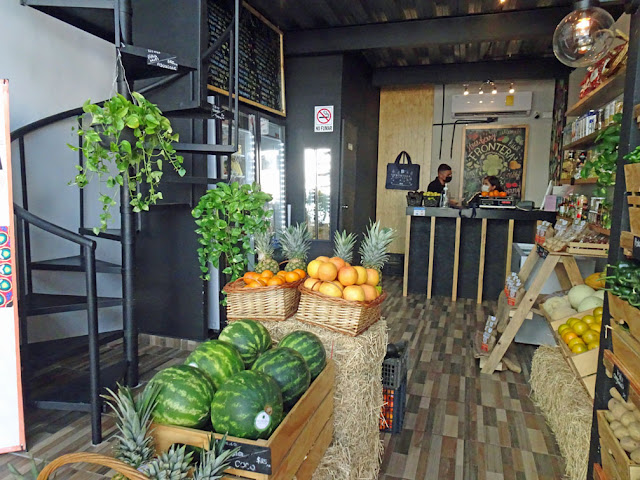 Even remembered to take our bag in with us. 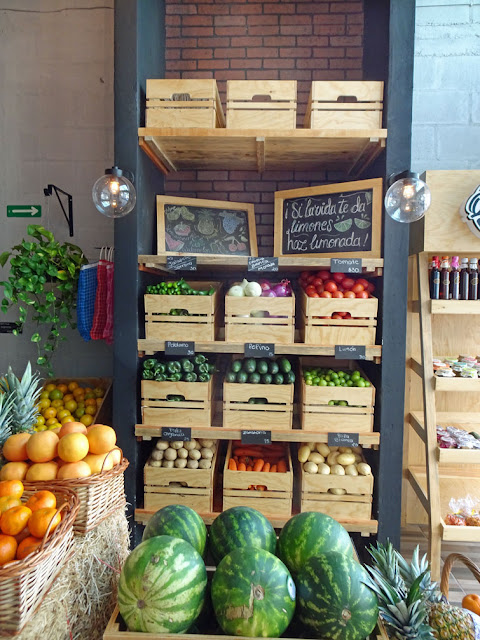 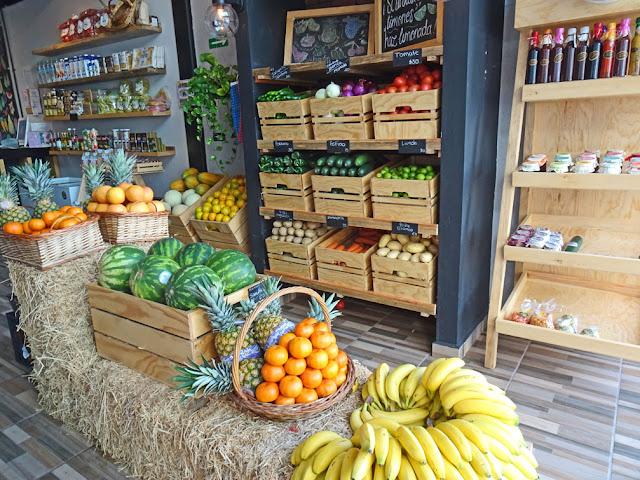 Kind of an interesting sunset that night. Probably prettier over the ocean. 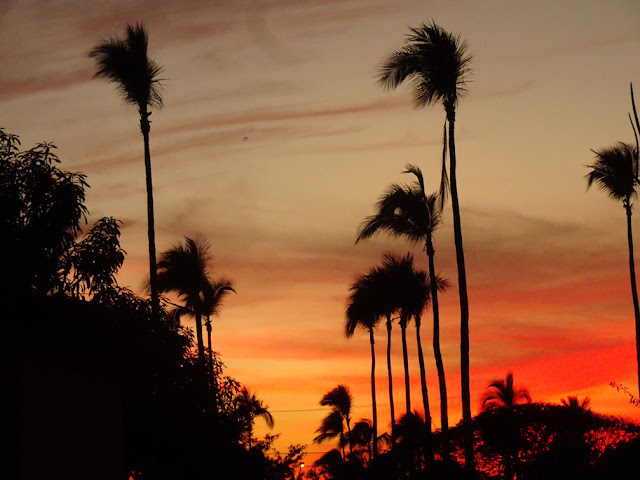 Staying home over the weekend again when so many tourists are in town. Might go for a ride or not.
Watched soccer game yesterday. Barcelona really has to do something - they are playing like kids in a sand lot.
Posted by Carol and Bill at 7:12 AM

Staying home here too. Also might go for a drive later just to look at some Xmas lights.

We've been doing a lot of riding around. Went to La Martina this morning, only ones there for a while. Ate and left.

So sorry about the blooms on your hibiscus - I think iguanas also eat those blooms and I know they are in the RV Park, too. Hope you find the critter that did that and give him a good swat with your broom!
Lots of interesting photos; thanks for sharing.