Saturday turned into an interesting day.

Saturday started out with a pretty nice sunrise. 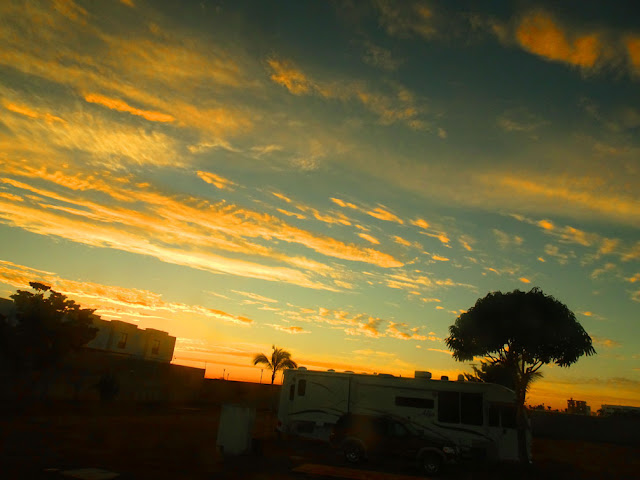 Then later we had a visitor to our site. He is a big one. 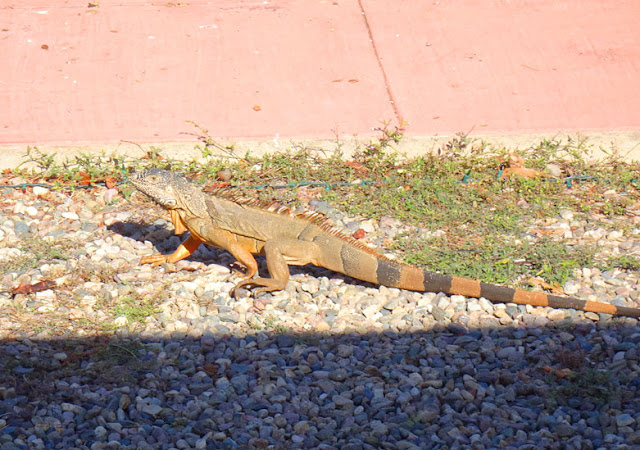 Probably over 3 feet from nose to tip of tail. 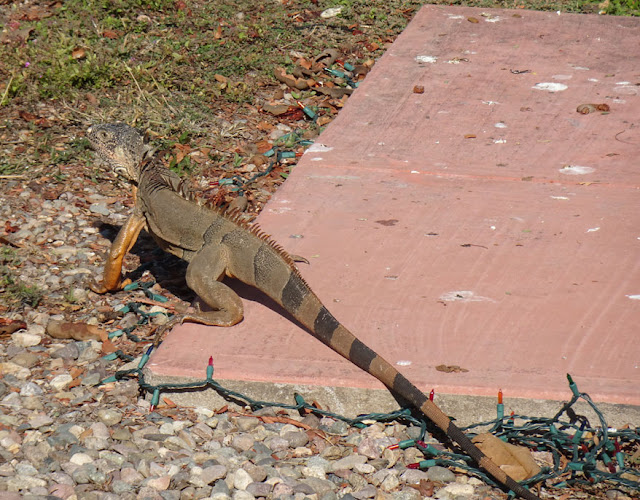 they can sure move fast. Once I opened the door he was up the tree ZOOM. Got one picture of him in the tree then I looked at the camera then back at the tree and could never find him again. 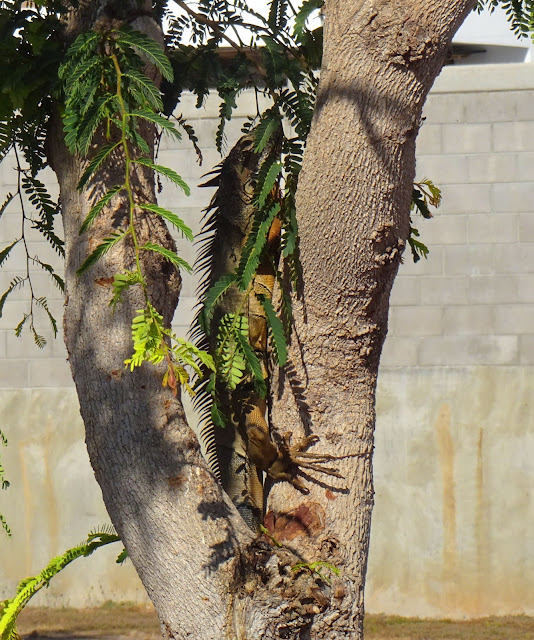 Bill took a nap in the morning and I laid in the afternoon down for a half hour and got up almost two hours later. Day mostly gone.
We had bought some thinly sliced chicken the other day so here is Bill getting ready to cook it. Trimming it. 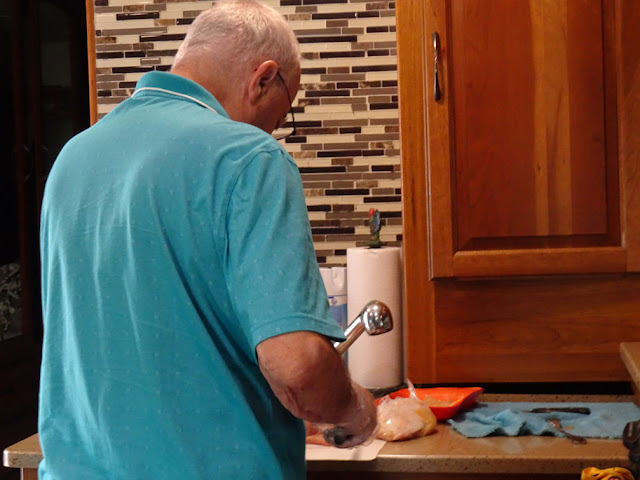 The chicken is marinating in egg, milk and spices. He is getting the breading ready. I know, maybe the gluten thing isn't really what was bothering him...Using panko and Italian bread crumbs for breading. 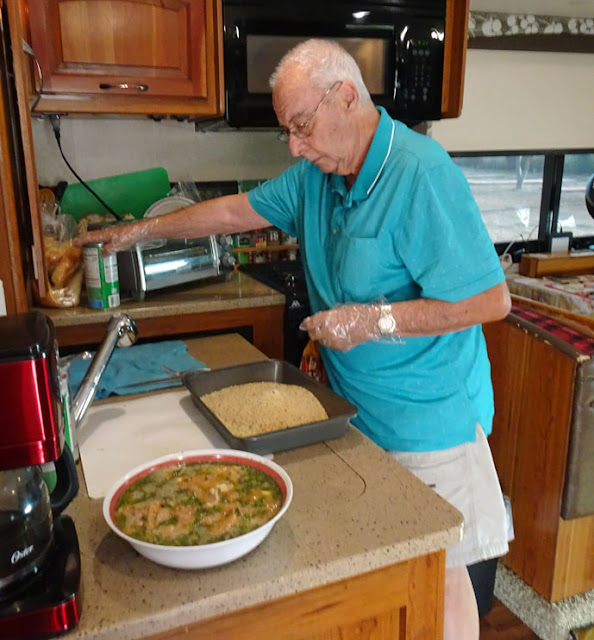 Pounding the breading on. 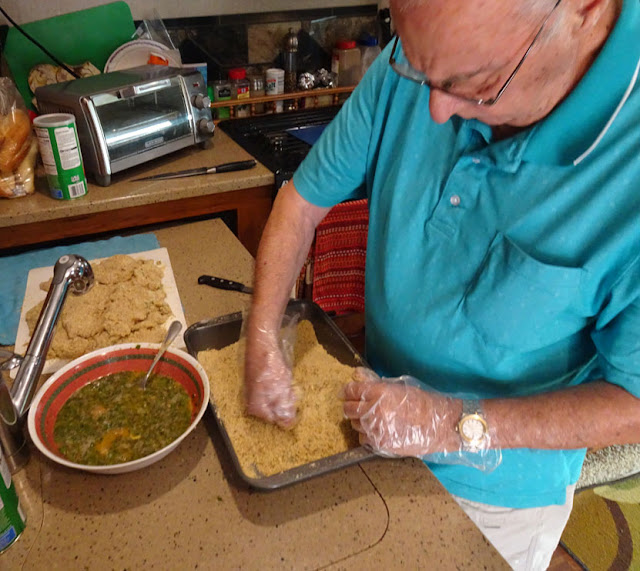 All ready to cook. 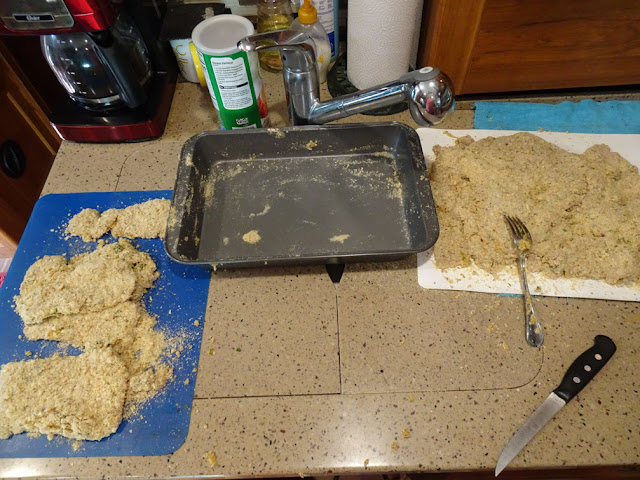 All cooked. Will separate in baggies and freeze. Good meals and snacks.  He has snacked on several pieces and it is not bothering him. 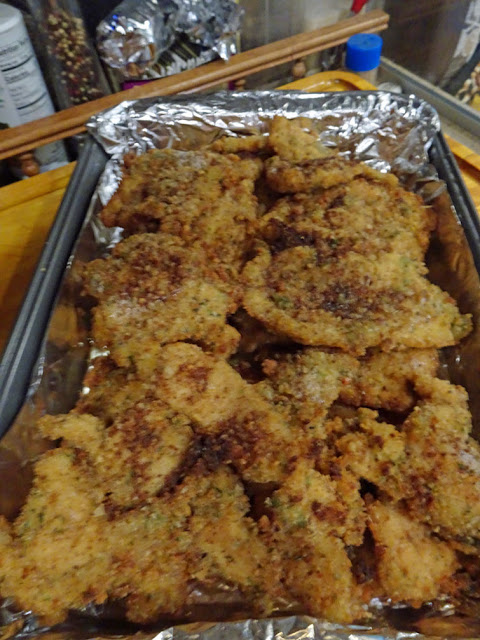 Was watching the sunset which looked like it might be a fantastic one. Went outside. A whole bunch of swarming black birds. Hard to get a picture of them they were moving so fast. 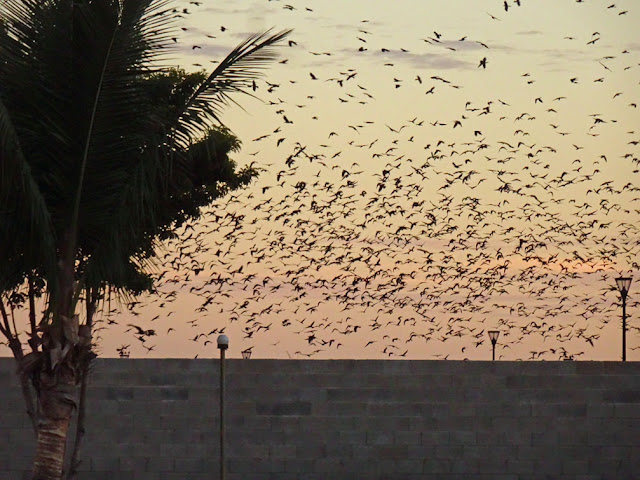 Got a short movie of them. Like being in the old movie.

The beginning of a fantastic sunset. This is look east behind the RV park. Clouds are starting to pink up. 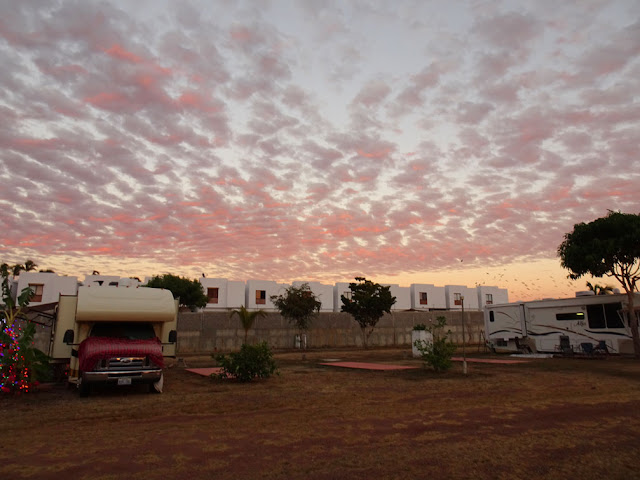 Just more of the sunset. It kept getting better and better. 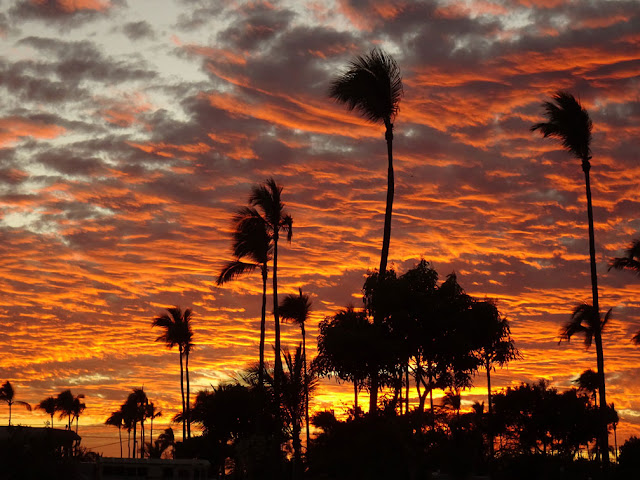 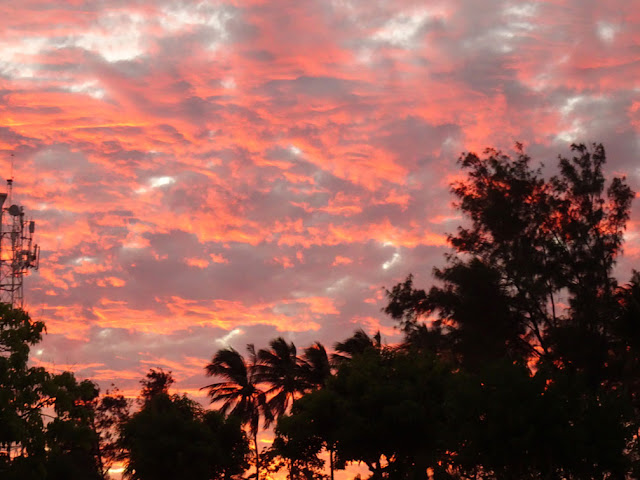 Looking back behind us again. 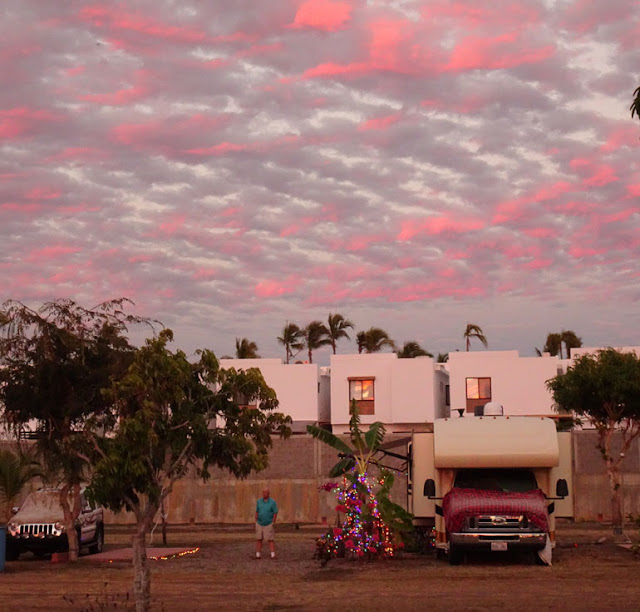 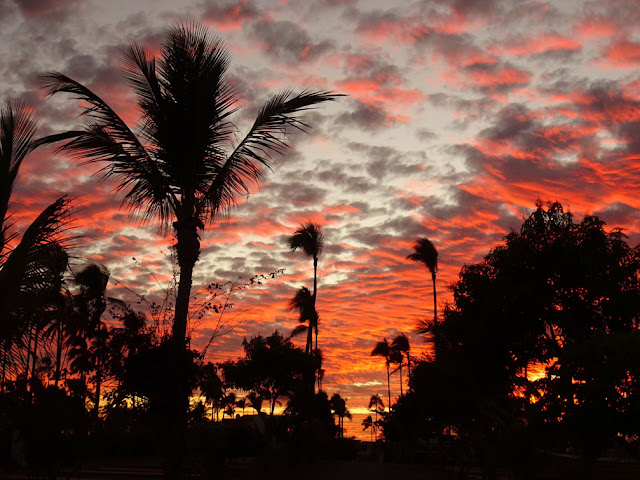 The birds continued to swarm. Thousands of them. 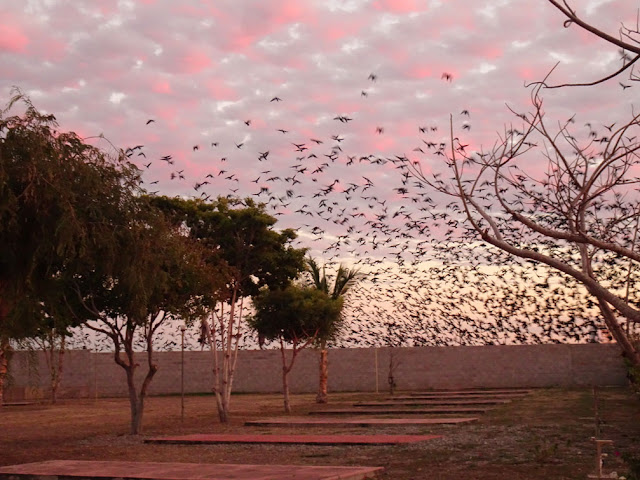 Finally we got smart and jumped in the Jeep and drove across the street to the beach. Got there for the majestic ending. 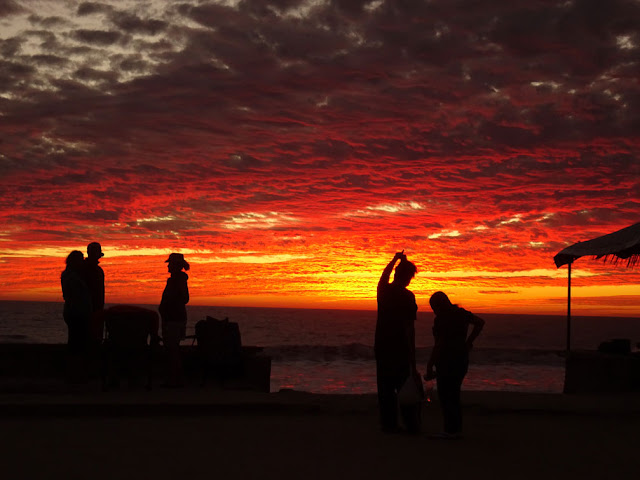 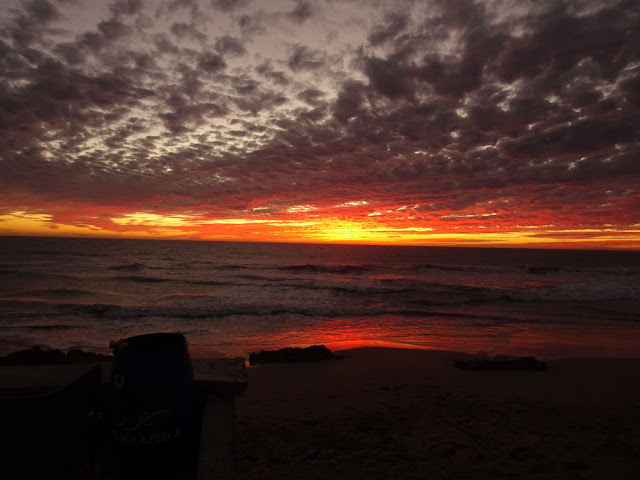 Wow - for not going any where and not doing anything it was quite a day.
Had another great sunrise this morning.
Posted by Carol and Bill at 1:14 PM

Beautiful sunset! Better than TV any day! Thanks!

Awesome sunset. Thank you for sharing.

I read that iguanas can live 20 years and that old fella has been in the park a long time. Gorgeous sunsets. I had hoped Bill just had a tummy bug as we are all plagued with them from time to time here. Pepto works for me. No one wants a gluten allergy..too restrictive and Bill enjoys his food. I like a bit of parmesan in my panko on the chicken..yours looks yummy!

gumo - one of the best so far this year.
Sandy - I wish we'd gone to the beach a little sooner.
Kathy - keeping fingers crossed for Bill. The panko he used had parmesan in it. I brought it from home. Tastes really good.