We've been away from home for 71 days today. Seems longer. Covid cases in Las Vegas still in the high numbers. Some hospitals full. Good place not to be I guess.

This is Bill coming out from the laundry on last Monday morning. That is one thing I miss when we get home. It is nice to get everything back all smelling good and folded. Even got my skirts ironed.

So why am I writing about Monday. Well we really haven't done much since then. Just going to grocery store and out to breakfast across the street. 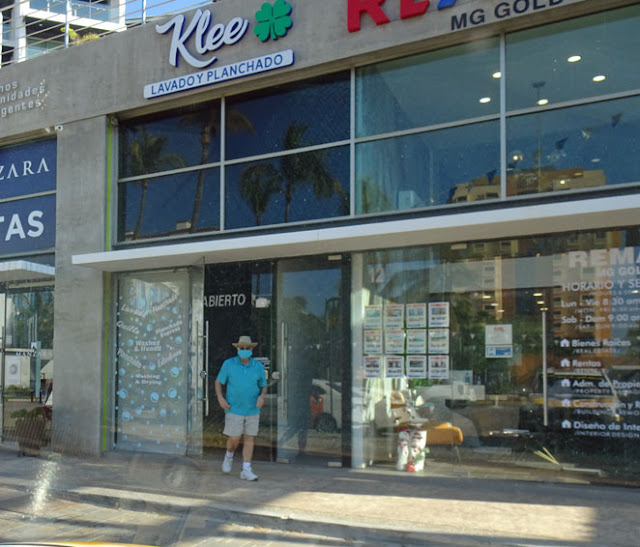 After leaving off the laundry we picked up Mark and headed to Centro. Bill really likes the Spanish Tortilla that Belisario serves for breakfast. Nice drive over there and parking lot right across the street and a nice day. When we got there all their outside tables were in the front of the restaurant on a really busy street. No one else was outside eating. Bill asked them if they could put a table on the side street for us as it would be much quieter. No problem. Got our coffee and placed our orders. The manager who moved the table spoke very good English. The waiter and waitress spoke no English, no problem.
We sat and talked and drank our coffee and waited. After a bit the waiter came out and told Bill in Spanish that there was a complication in the kitchen. But no problem we would get our breakfast. We later found out the "complication" was no gas for cooking.  Hum...about 20 minutes later the waitress brought us some delicious guacamole and chips.  Because we were waiting so long. Then she  brought out another bowl of guacamole and chips. Then a basket of what looked like cranberry bread. Almost an hour gone by. We didn't need to go anywhere so no problem. About an hour and a half later we were brought our breakfasts with much apologizing. Mark needed syrup for his French Toast. Neither waiter nor waitress understood what he was asking for and Bill couldn't remember the word for syrup in Spanish. Finally the manager came out - turns out is Maple Meil. All was well. Just as we were finished eating a gas truck pulled up right next to us. The passenger jumped out put a ladder up against the wall and pulled the hose off the truck. On to the roof to fill the gas tank. While paying the bill we found out the gas truck should have been there at 7 in the morning.  Because they were out of gas. Hum...I wonder how they cooked our breakfasts? Don't know. Our table, the ladder and the hose. Worker is on roof. Another experience to remember fondly. 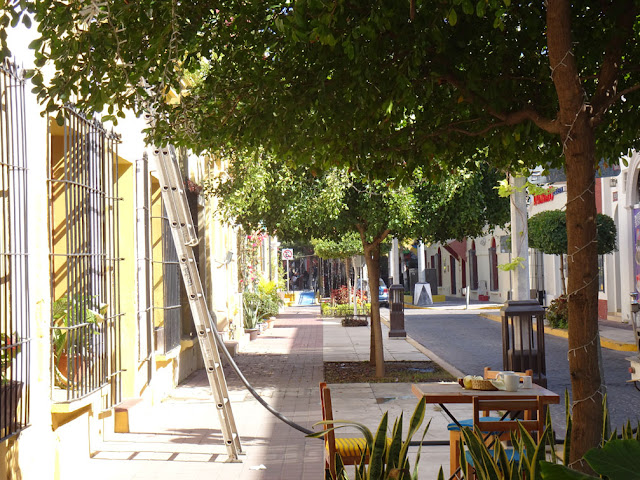 Took a ride after eating. Went up to the El Mirador restaurant on a hill across from the light house. Haven't eaten there. Heard the view is spectacular the food so so. Didn't plan to stop just driving around.
Any way passed this beautiful building on the way back. When we first saw it years ago it was crumbling apart. Now it looks great. 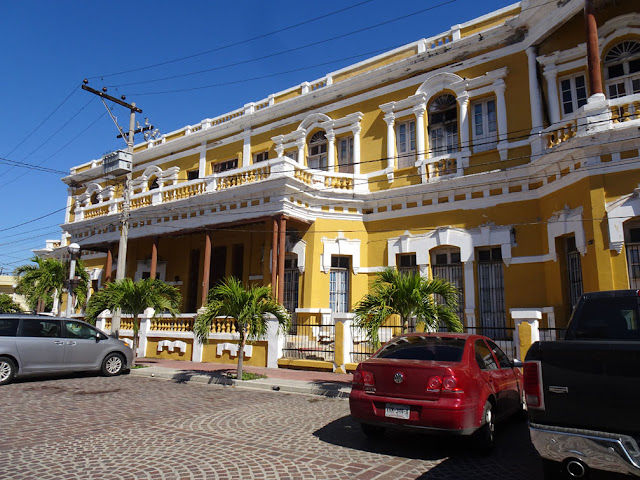 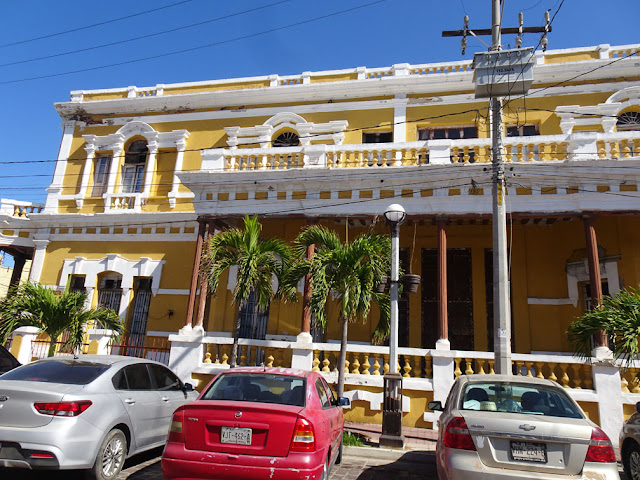 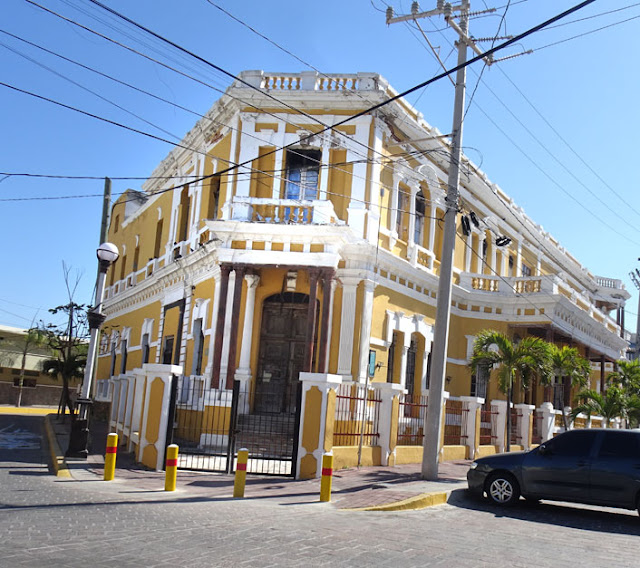 Don't usually go down this street. In this area are a couple of museums and a small park. 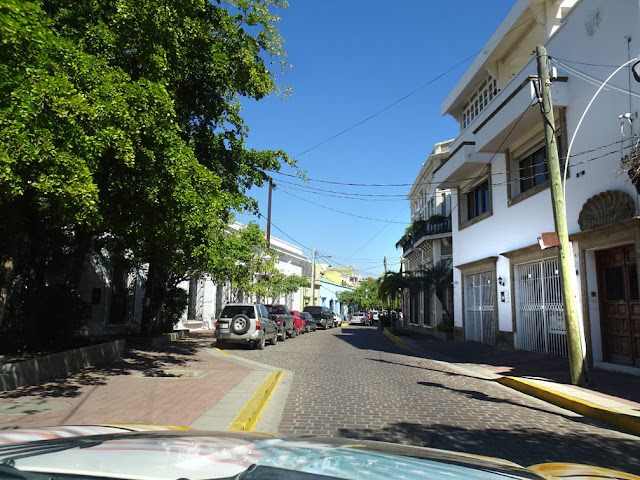 Road narrowed down quite a bit. Surprised no one parked had their mirror pulled in. As it was we barely cleared them. 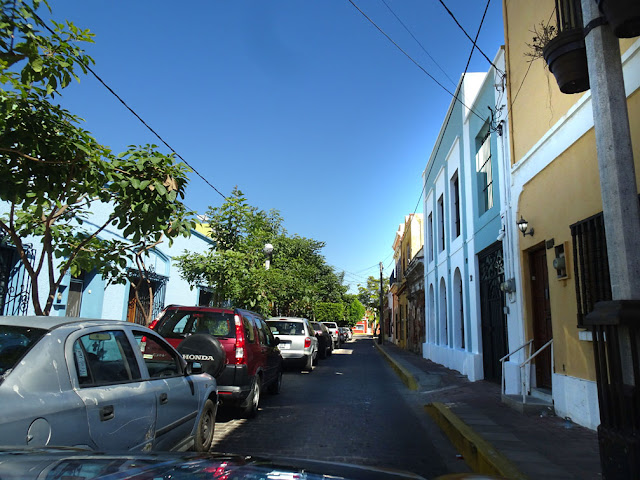 As always, beautiful restored buildings and some that are crumbling down. 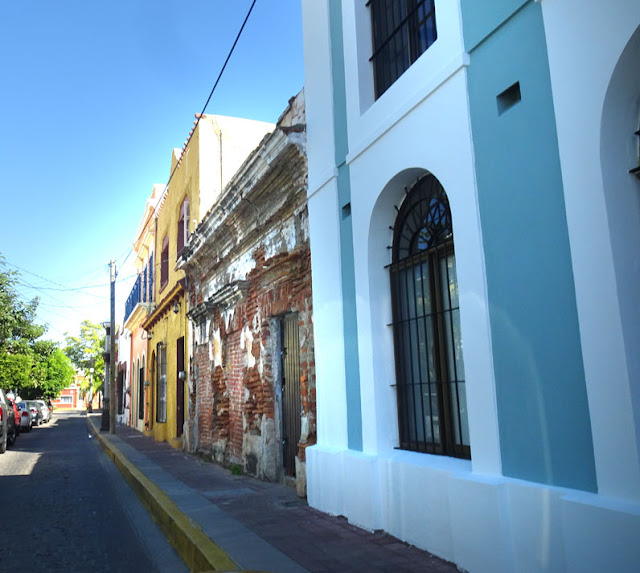 Some of the old original bricks are hand made adobe. 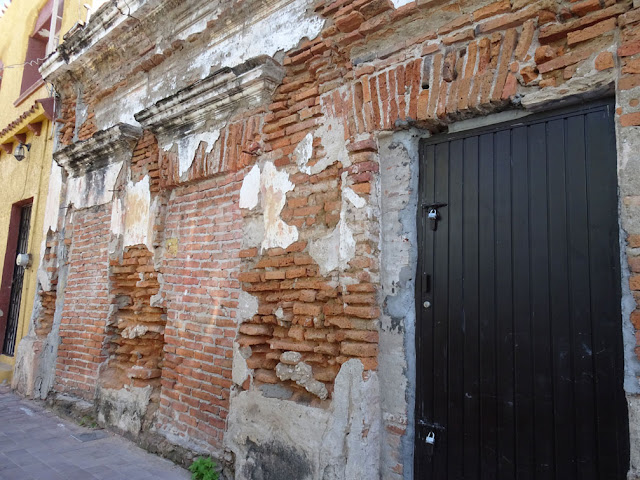 I bed it was pretty when it was new 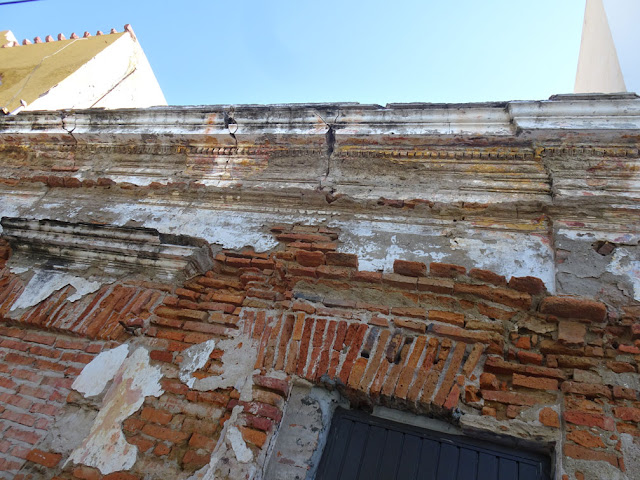 Bill was driving through Centro heading towards the bakery. Because all the streets are one way he had to take an indirect route. Which put us on some really, really narrow streets. I'm glad I wasn't driving.
Just another pretty building. 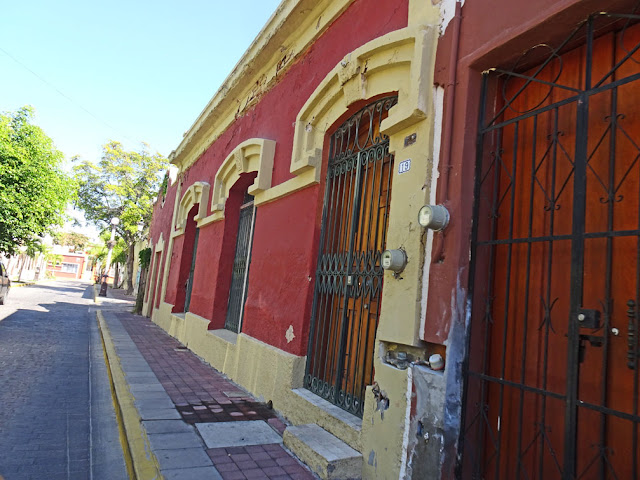 Like I said did not do much this week. Have tried but not accomplishing anything. We are still having problems with our Dish Anywhere system So I called them again. They were no help. The problem is with their system and guess they can't figure it out. Sometimes we can get the channels we like to watch and other times we can't. Changes from hour to hour. Annoying. But can't do anything about it.

Also trying to get a new Primary Doctor seeings how ours just disappeared. Have called medical group twice, been told no problem put me through to scheduling. On hold, on hold, on hold. Then leave a message and we'll get back to you. Happened two days in a row. No call back. I'm going to be a little less accommodating the next time I call. We get calls from the US on our cell phone all the time so that can't be why we haven't heard back.

We did do something else, yesterday we took a drive to El Quelite. Got a late start. Should have known better. The place was packed with people. Didn't even get out of the car. Next time we will go EARLY. Today just to the supermarket. For some reason inside walking around with the mask on starts my heart pounding and my nerves be on edge. Claustrophobic I guess. I can't wait to get outside and pull mask down. I wanted to stick my head out the open window of the car just like a dog. Calmed down by the time we got home.

Doesn't seem like 71 days! Is that building the old white one (kinda near Angelina's)????

Jackie - seems longer to me. Yep - it is that building, looks nice now, unless you look too closely. paint already pealing, iron getting rusty. shame

Get A Blank ATM CARD And Cash Good Money/Funds Pay Your Debt directly today in any ATM machine around you anywhere in the world. contact cryptoatmhacker@gmail.com.. It's 100% guaranteed secure with no worries of being caught because the blank card it's already programmed and loaded with good funds in it, in such a way that's not traceable which also have a technique that makes it impossible for the CCTV to detect you, i am not a stupid man that i will come out to the public and start saying what someone have not done. For more info contact Mr john and also on how you are going to get your Card, Order yours today via Email: cryptoatmhacker@gmail.com