Flea Market in Aticama and shopping in San Blas

Will try to get this posted but already having problems with the Internet. GRRR...Might have to go into town where I can get an Internet cell signal. Right now waiting for mechanic.
Had a busy day Sunday. Here is a little map of the area. We are at the red dot El Chaco RV – San Blas is a bigger town, Aticama a little town. The road between El Chaco and San Blas is under construction and a real mess. 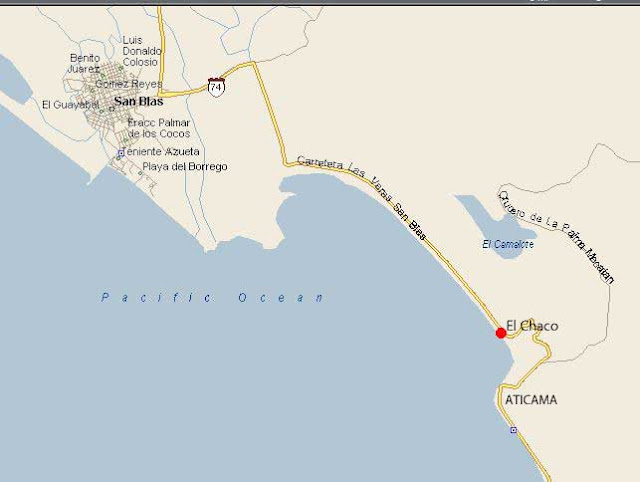 Yesterday morning we went into Aticama to the Cultural Center to the tiangis [flea market.] The first stand we stopped at was the coffee stand. The vendor didn’t have the coffee we wanted but told us he would have it by next Sunday. We like his mocha flavored coffee. The man buys the beans from local growers then processes it and packages it. The picture is of dried mango – a friend of his has started up a small business drying mangos. We bought a package. They are good, not as sugary as what we are used to and a lot more chewy. 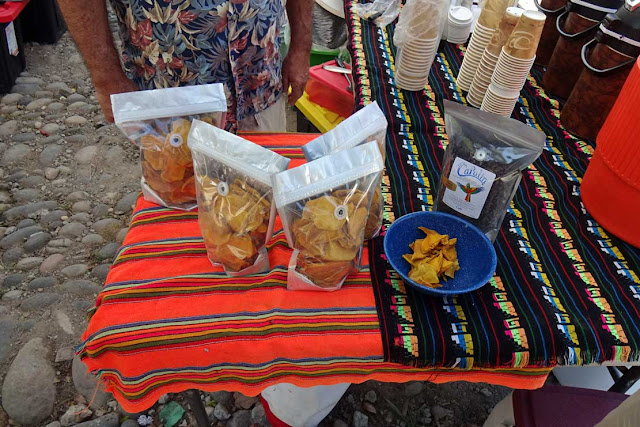 There were a couple of Huicholi Indians with stands. Some of their beautiful beaded jewelry. 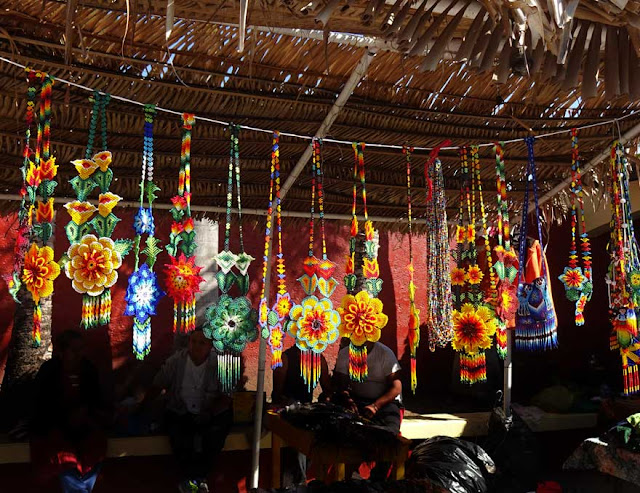 Another stand. The woman in the colorful outfit is selling embroidered clothing. 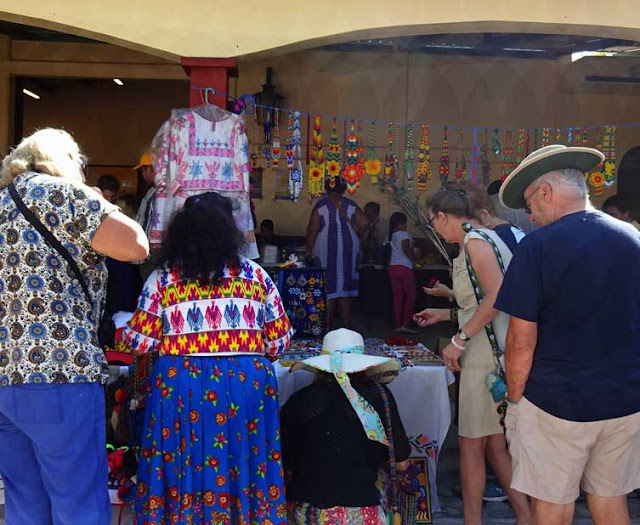 The traditional outfit of the Huicholi man. All hand embroidered. Long sleeve shirt and pants. 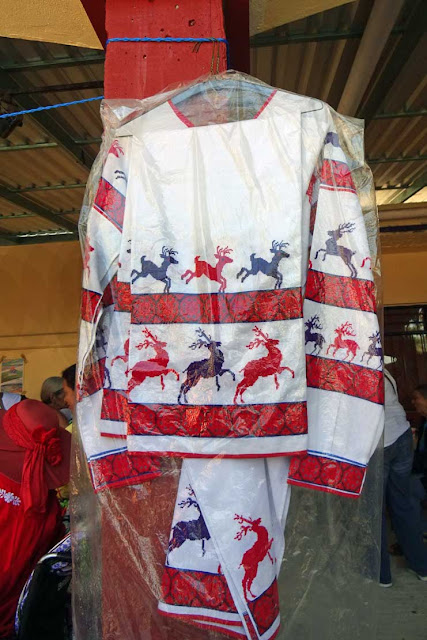 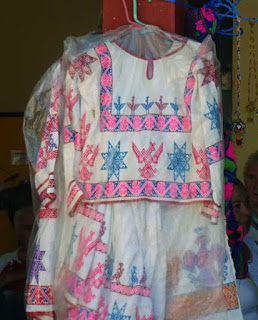 All we bought was the mango and ordered five bags of coffee for next week.
We dropped off the mango package at home then continued on to San Blas. In case you are wondering how we were getting around. John in his big blue truck was being our taxi.
Just a look at the torn up central plaza. The concrete seating areas are being torn down and replaced with new blocks.  All paving is also being replaced. Seems to be rather poor timing as the big Bird Festival that brings in people from all over the world is just beginning. 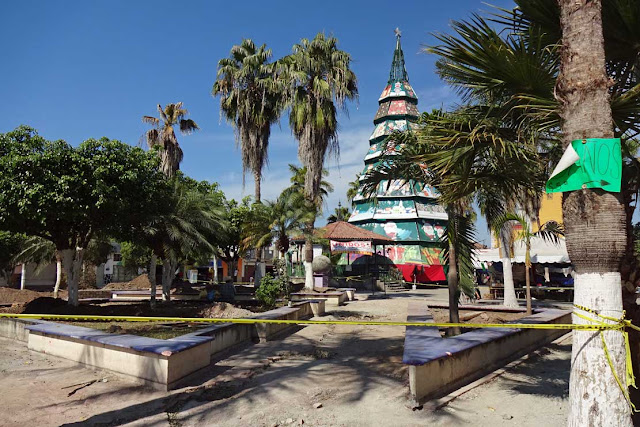 We were hoping our friend Melissa would be at the plaza. She was – getting ready for a big hug. She said she has been waiting for Guillermo – Bill. A few tears were shed and many hugs. The girl at the table is her daughter-in-law. 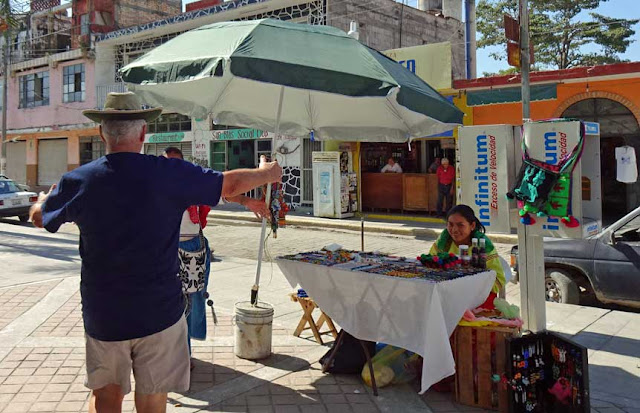 Bill took her some of his stash of beads. The type she uses for all her beautiful work. 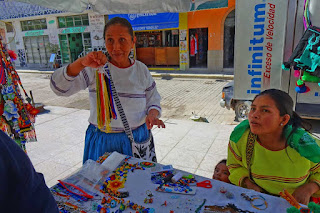 He also talked to her about changing the sizes of some of his hatbands. She was checking to make sure it could be done. 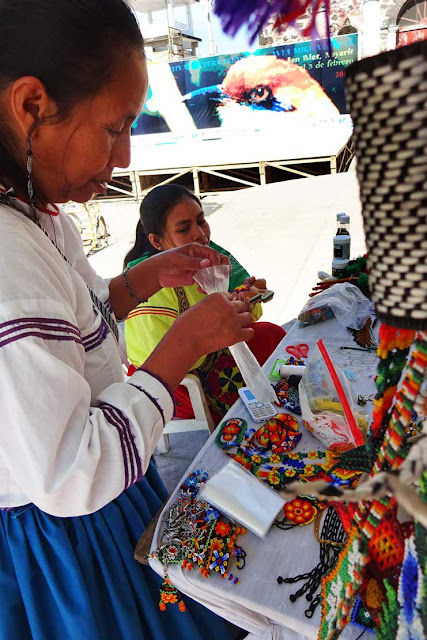 Her daughter-in-law was beading a pottery turtle. Each bead is put on – one by one. It is pressed into bees wax. This one takes a couple of days to finish. 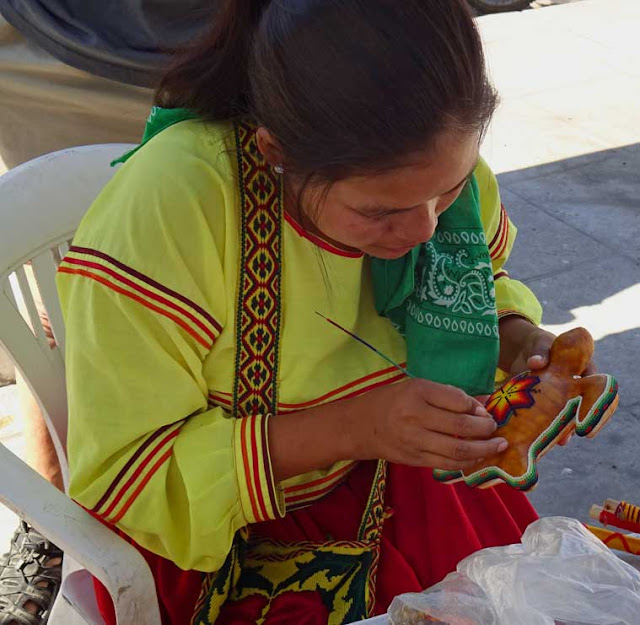 A closer look at her work. The child is her son. The brown part is the bee’s wax. The trim around the outside is finished. Now she is working from the center out. 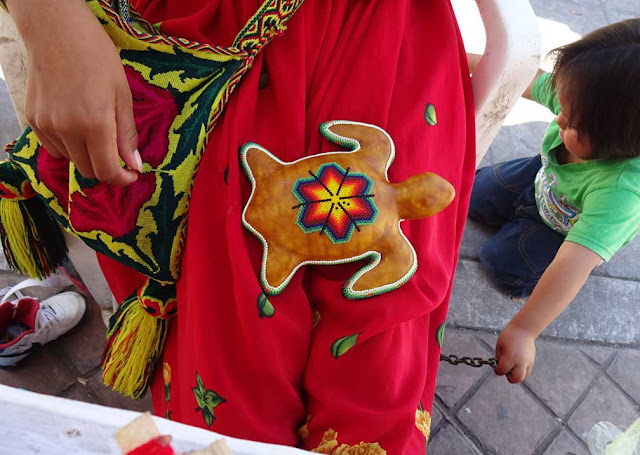 Serious conversation with Bill and Melissa. 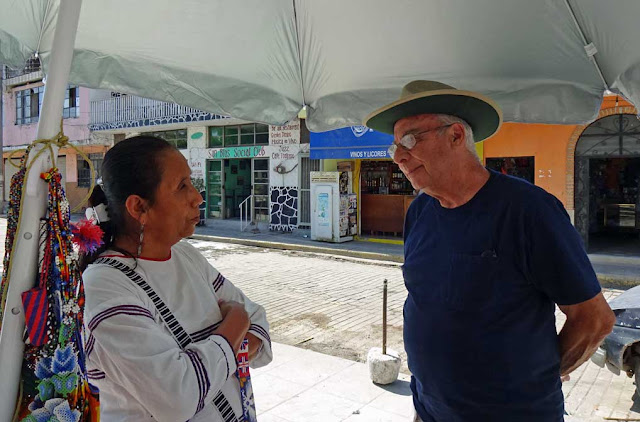 Looking at the main intersection. The very old church and the newer church. The stage in front is for the festival. Something going on almost every night. 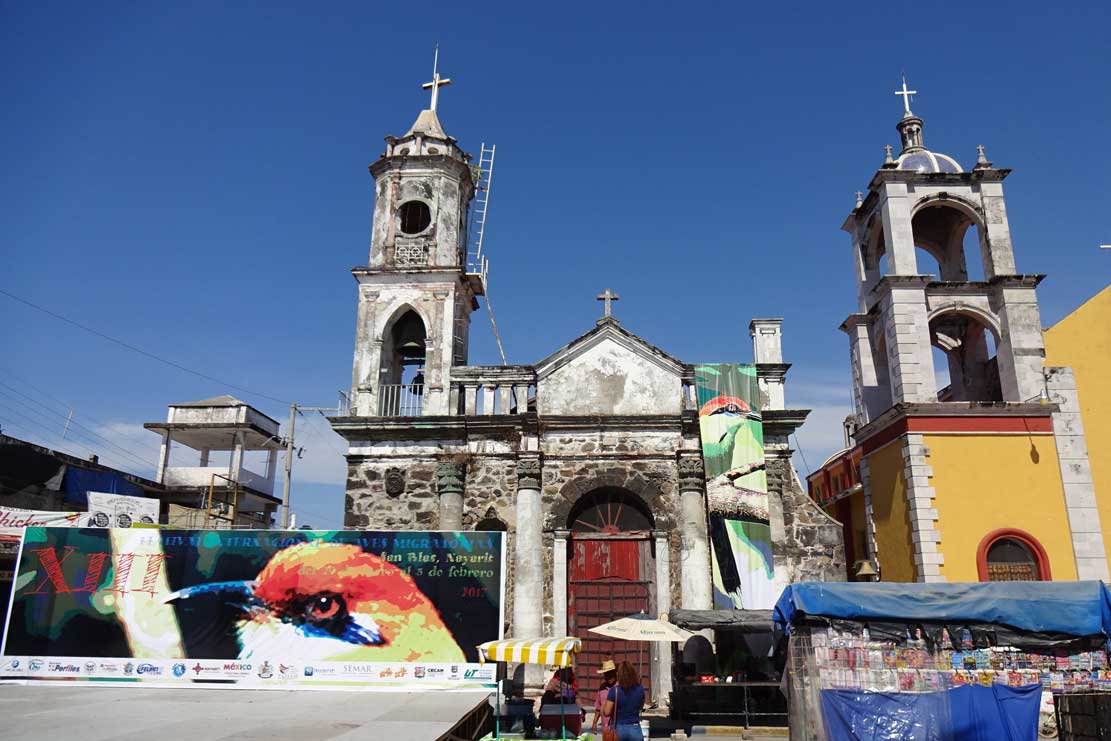 We went to a little supermarket a block away – found sugar, flour and regular bread. Walking back towards the main intersection we passed the cross country bus station. It is amazing to watch these huge buses drive up the narrow two way street to get in here. 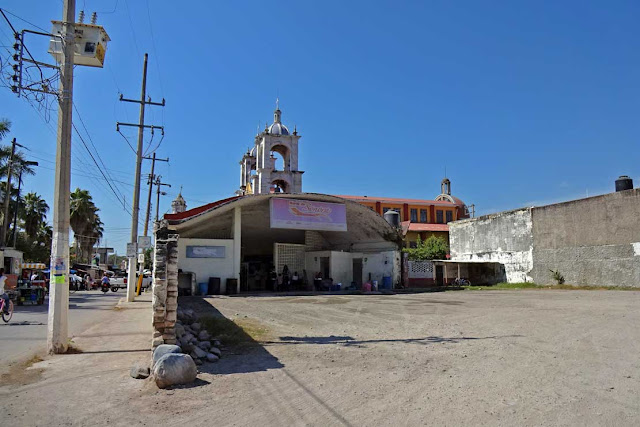 Looking at the plaza again. Just a few of the vendors set up around it. 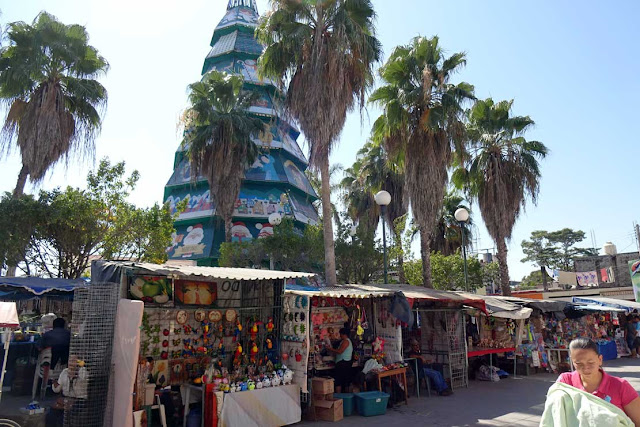 A group of musicians heading for the central market – where we were also headed. 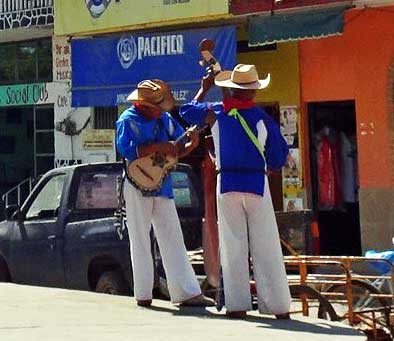 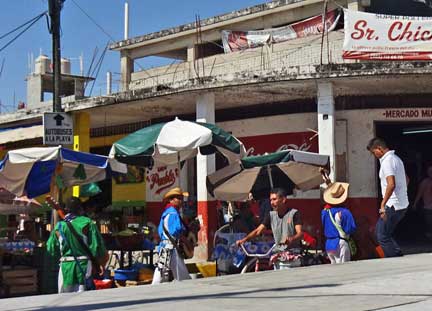 Another view of the main intersection. No traffic on this part of it. Some of these vendors are usually where the stage is. All kinds of things for sale: produce, clothes, fish, kitchen stuff etc. 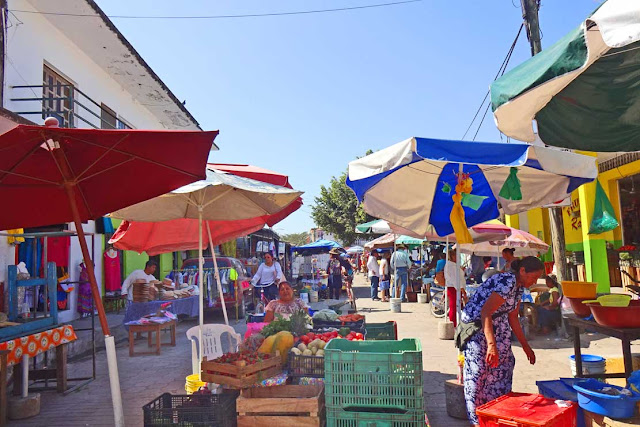 Inside the Central Market. Little restaurants in the center. Produce and meat around the edges. 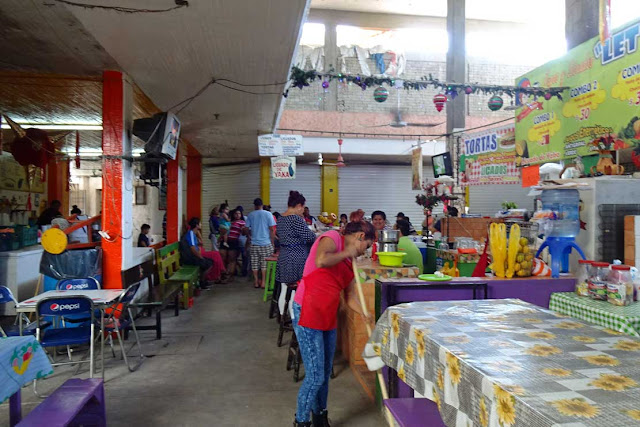 The biggest produce section. You pick up a blue plastic bowl to put your items in. 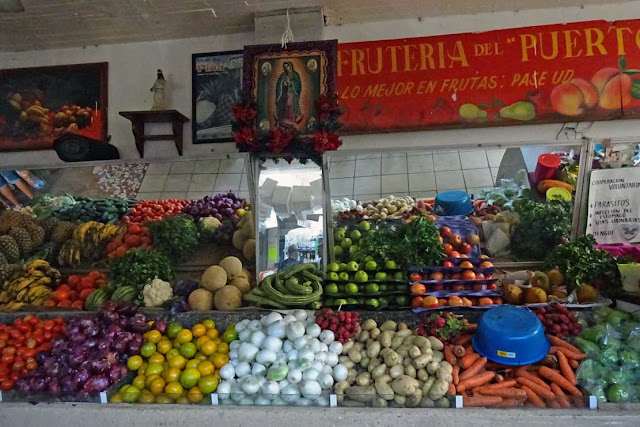 Across the aisle is a tiny store that sells: canned goods, paper goods, dry goods, soap and toilet paper among many other items. 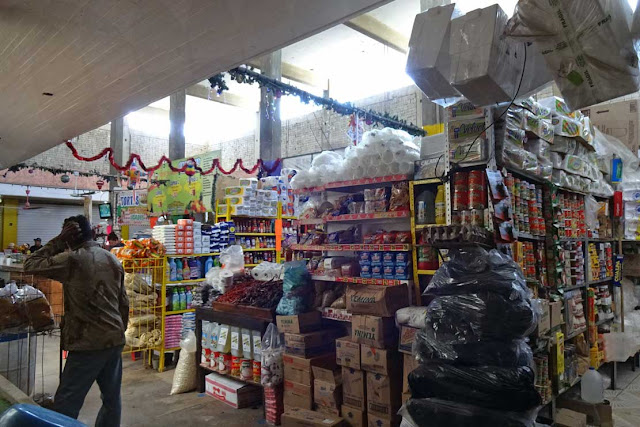 A look at some more vegetables. They sure smell good. 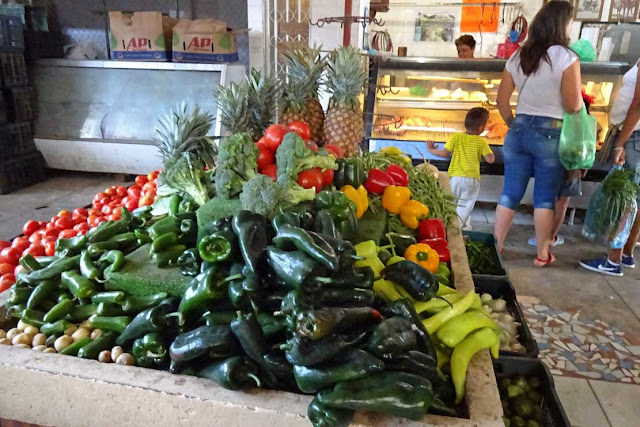 Bill paying for our purchases. 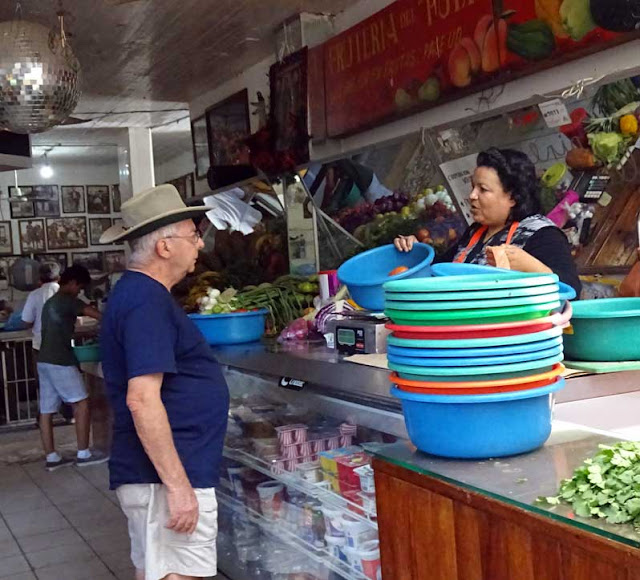 Leaving the market. The musicians are also done playing and leaving 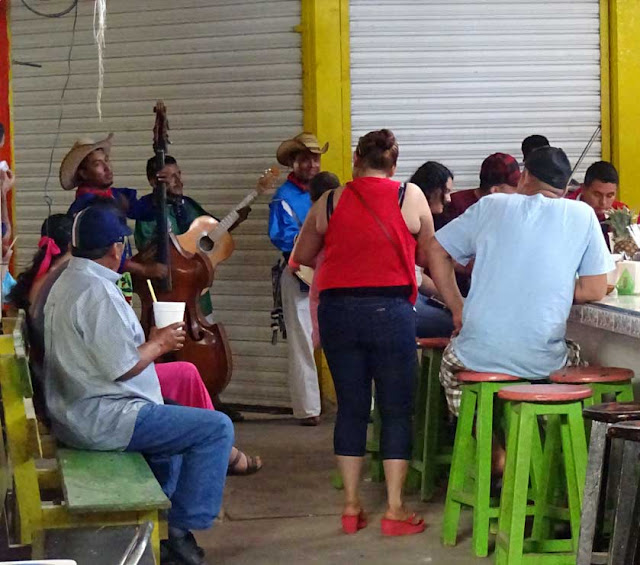 I'll finish writing about the rest of our day in town tomorrow. I've about lost patience with the Internet.

What interesting little towns. So many things to enjoy just looking at. I sure admire the Mexican people for there wonderful craftsmanship. I wonder how far these towns are from Mazatlan as, I want to visit them when I am there.
Thanks again for your pics and info.

Have you ever been to Lake Chapala? It is a little ways inland from where you are. I guess it is very popular with Americans there.

We have been there several times. HAD a cousin who lived there