Watching the fishermen come in, lunch in Golden Zone

Tuesday, real early in the morning, I woke up at 3:06 but managed to stay in bed till 4:38 – finally gave up and got up. It is now 6:50 and just starting to get light out. I’ve been on line – checking out why my ankle is still swelling from my knee injury. Guess it is normal – the answer gravity. Knee is still swollen and doesn’t like to bend too much. Still unable to sit on my legs while using the laptop at the dinette. Maybe that is a good thing and I will get broken of the habit. Have been busy walking etc. the last few days. So plan on kind of staying off it for a few days now.
Our friend – the captured tourist – Mark will be going home today and the weather is going to be cool and tomorrow the car will go back to the auto painter to have a few things on the new graphics fixed.
Depending on which weather forecaster I look at we have anywhere from 20 to 60% chance of rain today. With the high of 70 at 2:00 in the afternoon. We will make one run to the market ‘cause we won’t have the car back until Saturday [maybe.] And I want to get more of that polar fleece to do a couple more throws. Love working with it. It is so soft and silky. And so inexpensive 4US$ a yard.
So yesterday was our last day to drag Mark around. He met us here at the RV park at 9:45 – supposed to be 10:00 but he and Bill have an “I’ll be there first” attitude about meeting up. Mark won yesterday. Then we went a ways north to Cerritos beach/point to watch the fishermen come in.
Even yesterday it was kind of cool, but at least the sun was out.
A panga was just coming in when we got there. They already had the wheels under the boat so we watched them push and pull it up through the sand to the retaining wall. Well out of high tide line. Just some rusty anchors hanging on the rocks. 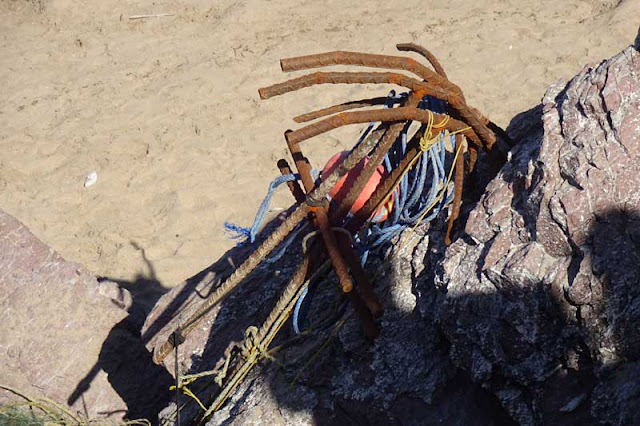 The boat has to be emptied by the fishermen. All gas cans, batteries, personal belongings etc. have to be taken out.
Then the catch is brought up the stairs to the restaurant where it is picked over and weighed and purchased. Sorting the lobsters by size first. 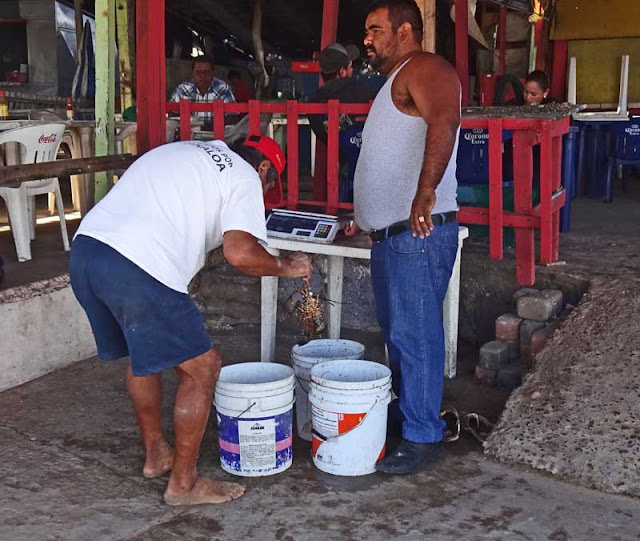 Then weighing them for purchasing purposes. They are kind of pretty. 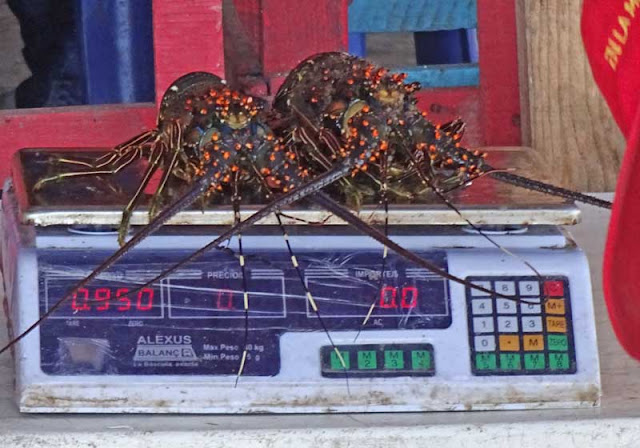 Waiting to be weighed. 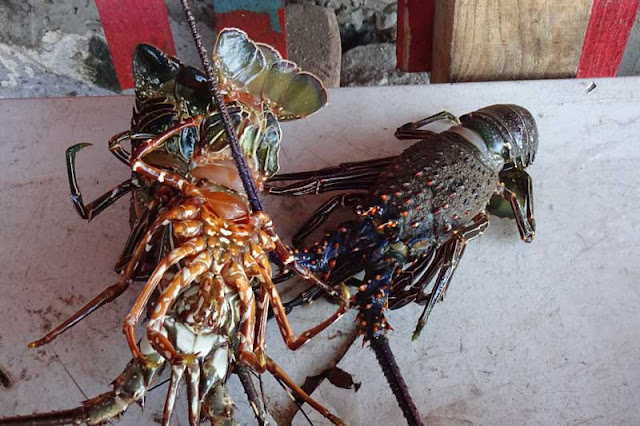 This guy had been swimming out around the rocks with his inner tube with a net in the center of it. He also was picking up lobsters. Bill found out that most of the lobsters caught here are not eaten in the restaurants here as we thought, but are sent to San Francisco! 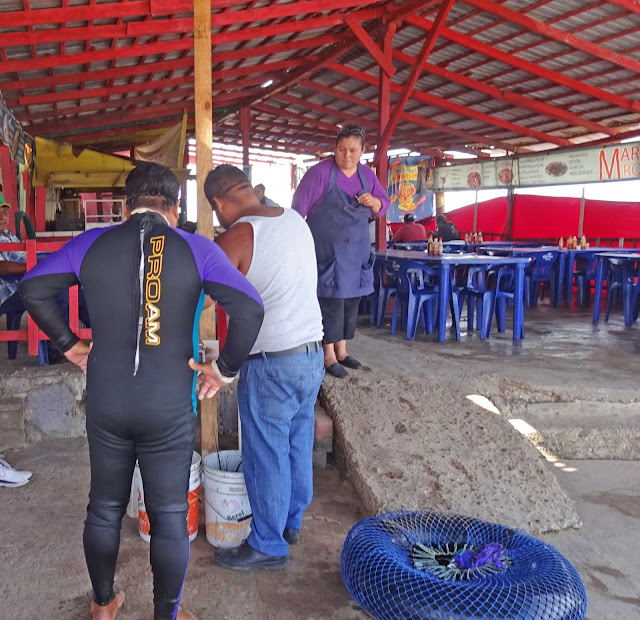 Another boat coming in. The boats were really late getting in, usually they start coming in at 10:30. By 11:30 only two had come in. We were told they were having to go further out to get a good catch. And this uses more fuel which is a big problem. This boat has just come in, they are getting ready to put the wheels under it. 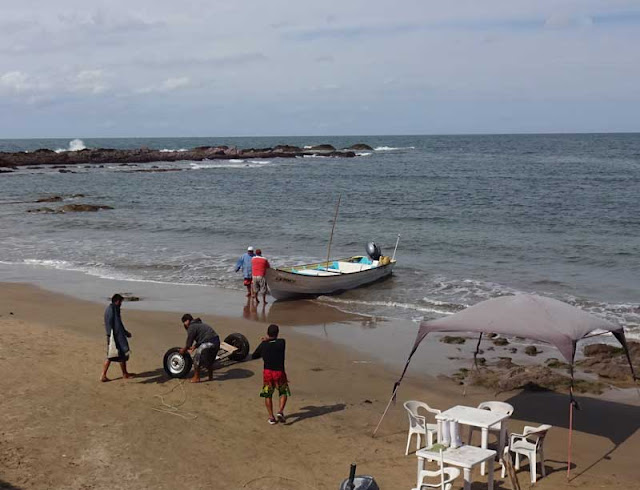 Takes a lot of them to lift it high enough to get the wheels far enough under it to move it. 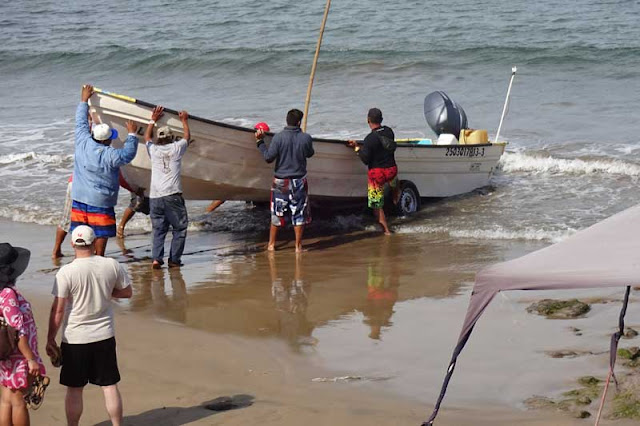 Clear up to the wall away from high tide. 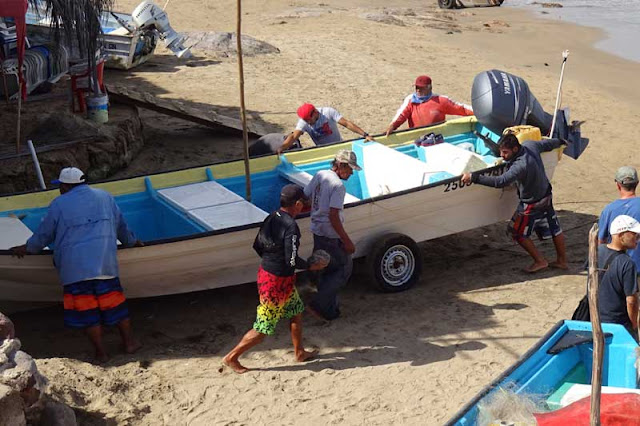 Now it has to be emptied and the catch taken out and sold. The boat belongs to the brother of the man in the red, yellow and green shorts. The man in the shorts is 57 years old and works and looks like a 30 year old. He helps every boat that comes in, lifting and cleaning and taking the catch up the stairs. 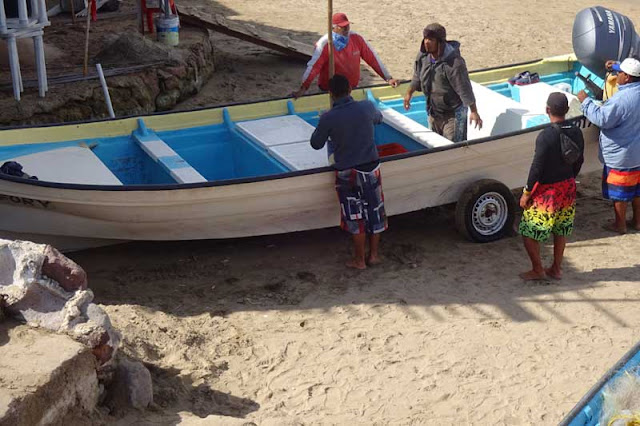 A bucket with fish and lobsters and a bunch of sting rays. 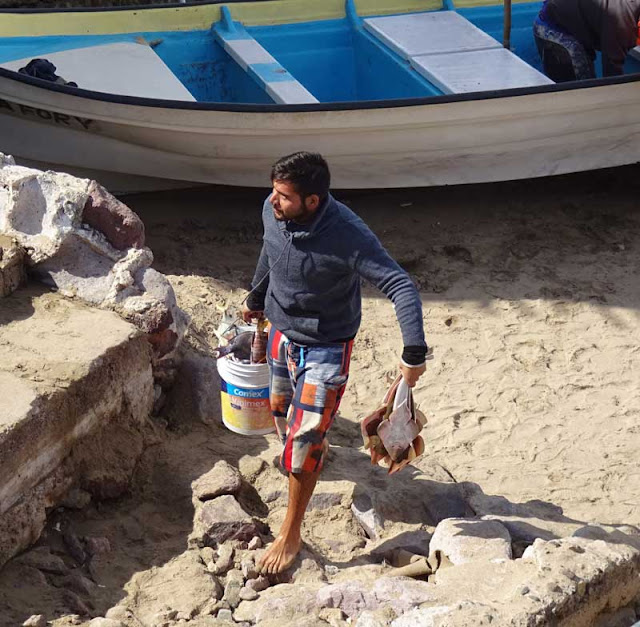 Checking the fish for freshness. If the gills are brown the fish was dead before being caught and he won’t buy it. 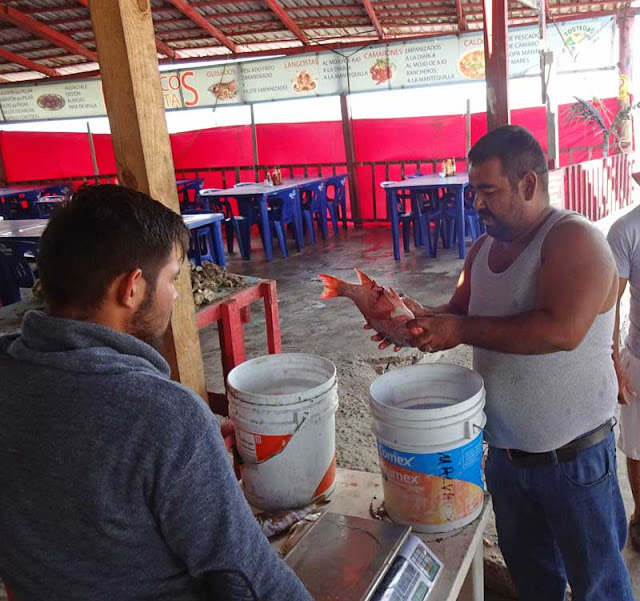 A couple of interesting shells caught up in the net. 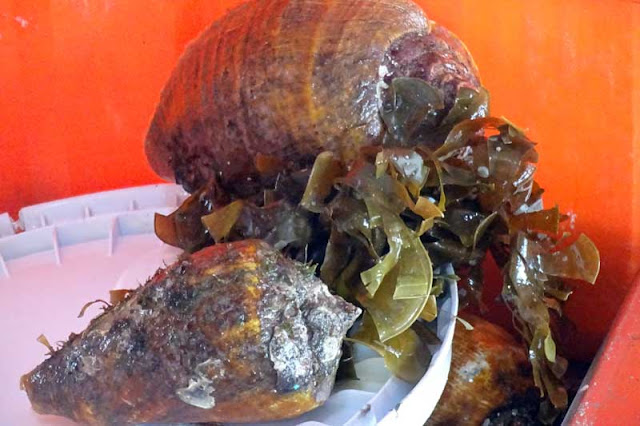 This motor had had work done on it. They got it out of the truck and were discussing how to get it back down to the boat on the beach. It was a big heavy sucker. 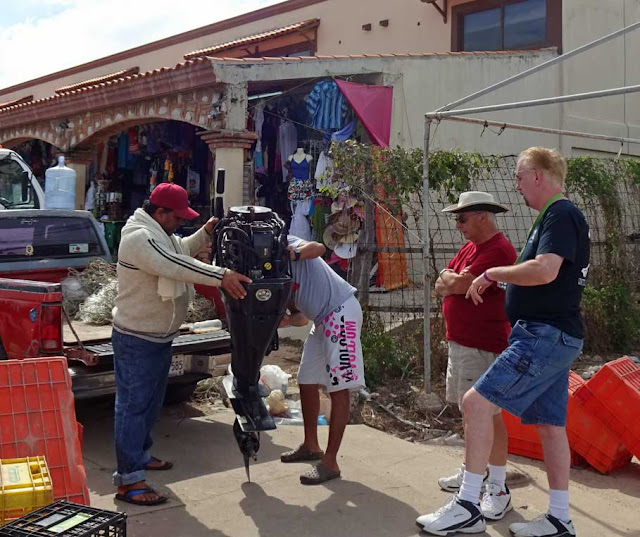 One guy got the bright idea to go get a small piece of net. Lay it on the ground then lay the motor down on it, heaviest end over the net. 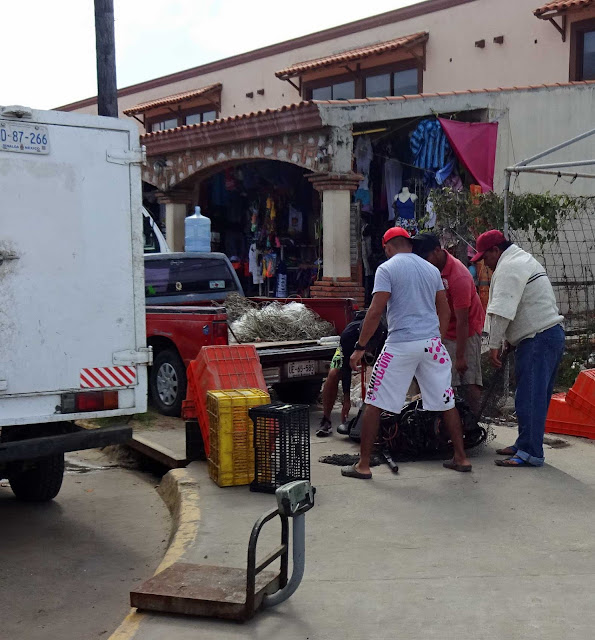 Four guys lifted it. Two at the sides of the net, one in back and one in front. 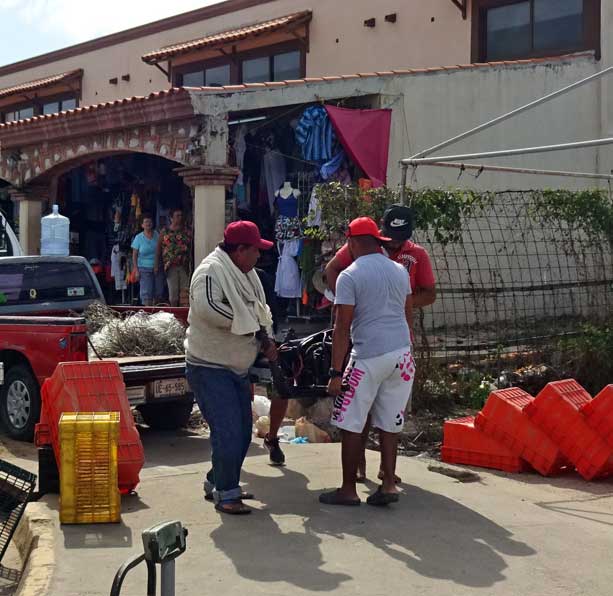 And off they went. The easy part over the walkway and down the ramp. Then came the broken up stairs. They made it though. 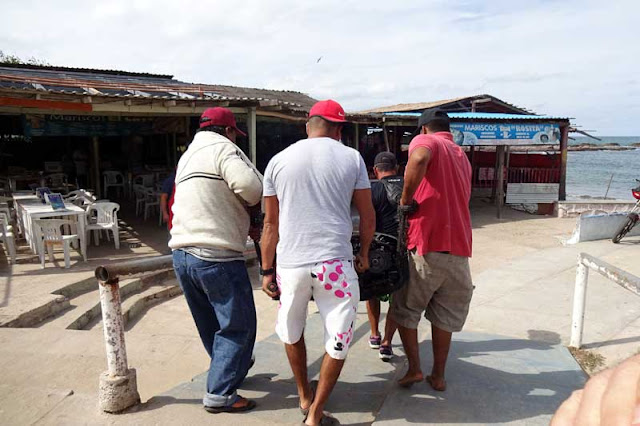 We walked around Cerritos RV Park showing mark how many people have built thatched structures around their RVs. And brick walls in front and back of them. Those RVs don’t go anywhere ever. No way to get them out. Personally I don’t think I’d like it – keeps everything so dark.


Then we went downtown to the Golden Zone. We had lunch at Lucky B’s. All of us had very good salads. Took a walk down through Ponchos arcade and looked at the beach. Looking south towards Valentinos and the Malecon. 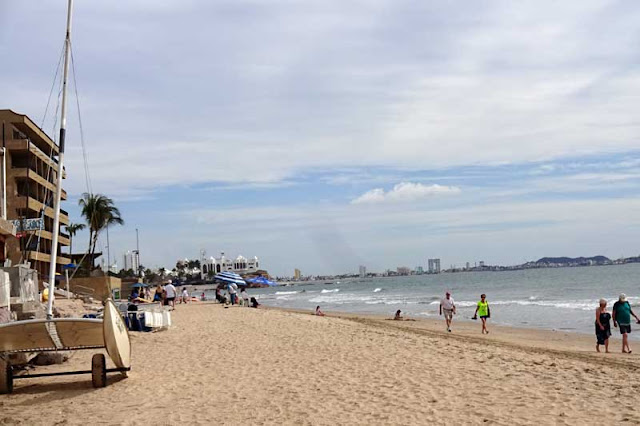 Then walked through the Sea Shell museum to look at the big shell fountain.
Dropped Mark off and said Good Bye to him. Hope he enjoyed his time with us. We sure had fun. Then went home and put my leg up for the rest of the day.
Posted by Carol and Bill at 6:45 AM

Had a FANTASTIC TIME. Can't thank you and Bill enough for your time and hospitality. You are very good tour guides. May see you again this winter,:)
Thanks again for the wonderful time. Be safe and take care.
Mark

Glad to have you here. Glad you enjoyed it. Right now it is 4:15 so you should be on your way to airport! How'd you like the rain?