We are in Aticama now

Hello from Aticama or more accurately El Chaco RV. Yesterday morning we went out to breakfast across the street. Came home and finished putting everything away. Left Mazatlan around 9:15. Miles to El Chaco – 188. We got there at 2:00. 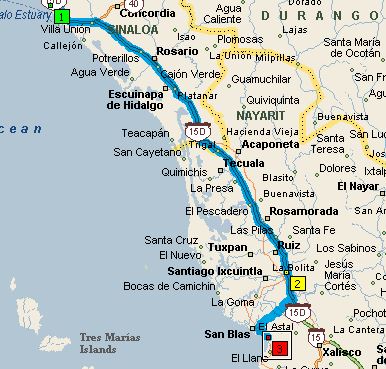 The first part of the trip was fine. Toll roads that were in pretty good shape. There were even shoulders. When the line is dashed you are supposed to pull over on it to let traffic get around you. 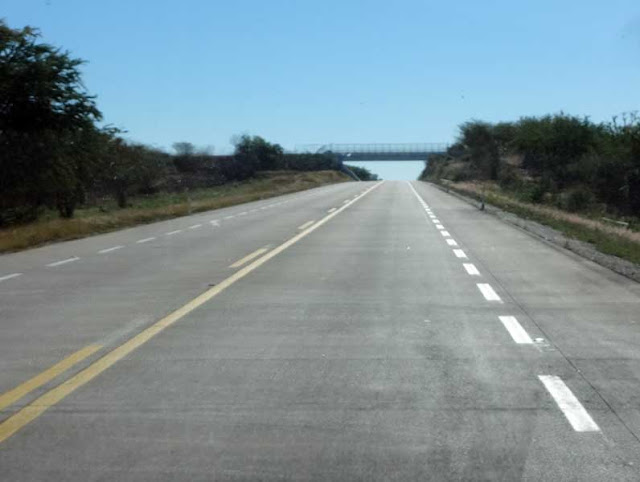 When the line is solid you are not supposed to be driving over there unless you have an emergency. 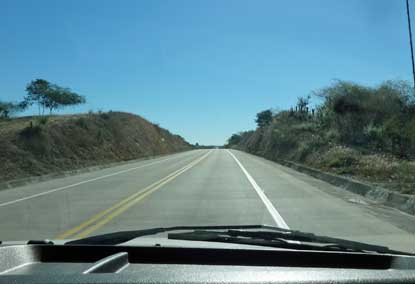 The first of five toll booths. Tolls for the day US$58! Pretty expensive for 188 miles. 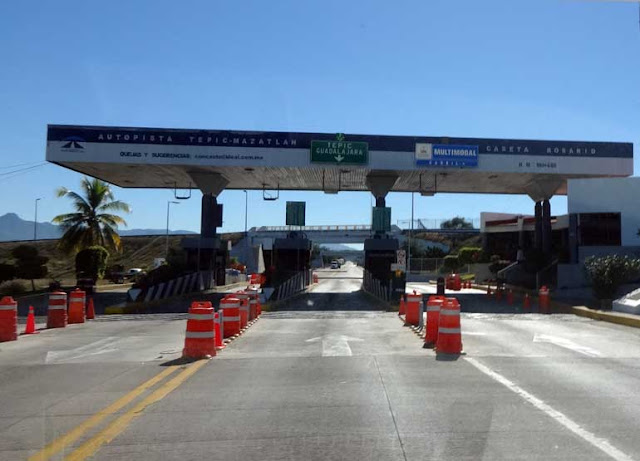 And couldn’t they make them just a tiny bit wider? For the first time ever Bill miss judged how close he was to the booth. The drivers mirror just barely touched it. He had to reach out and pull the mirror in a little bit to get through. I don’t know who was more surprised – me, Bill or the lady in the booth. Just kissed it, no scratches on anything.
We get charged for both the RV and the car. 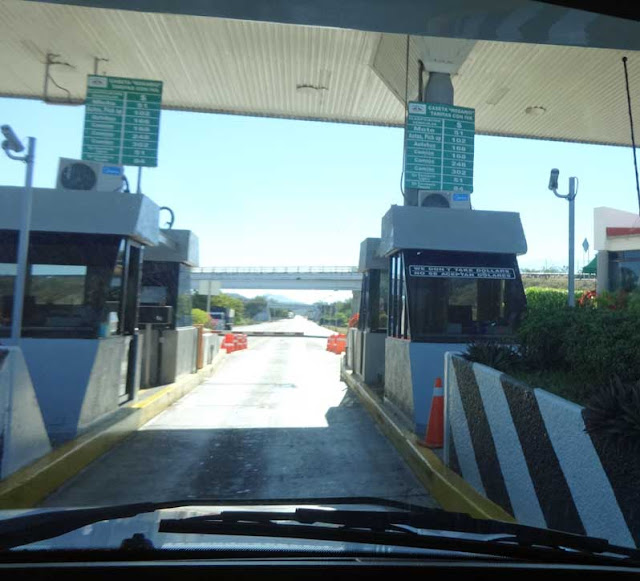 A new brightly painted store and restaurant on the other side of the road. 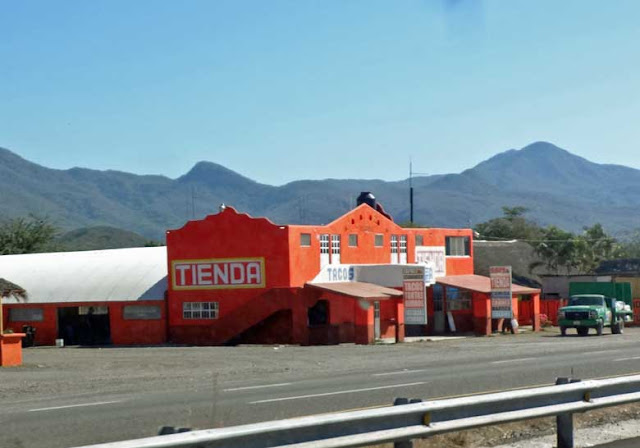 The first of three check points set up by the Federal Police. To slow traffic down they put a big – about 3 inch wide piece of rope across the road. Effective movable tope. 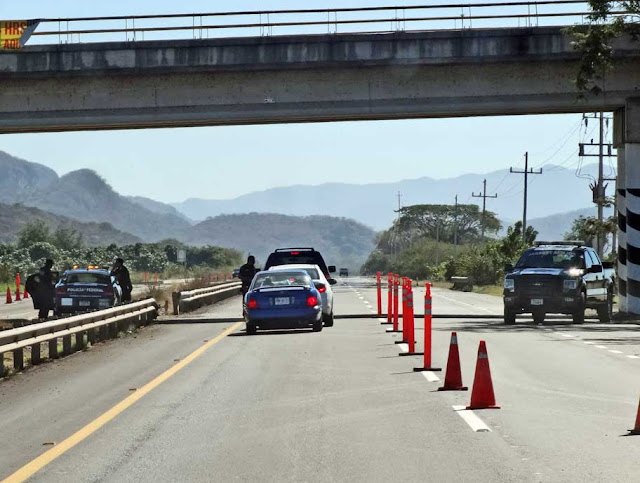 The black SUV in the front of the line got pulled over. The rest of just went right through.
A mural of the Virgin on the Bridge support. 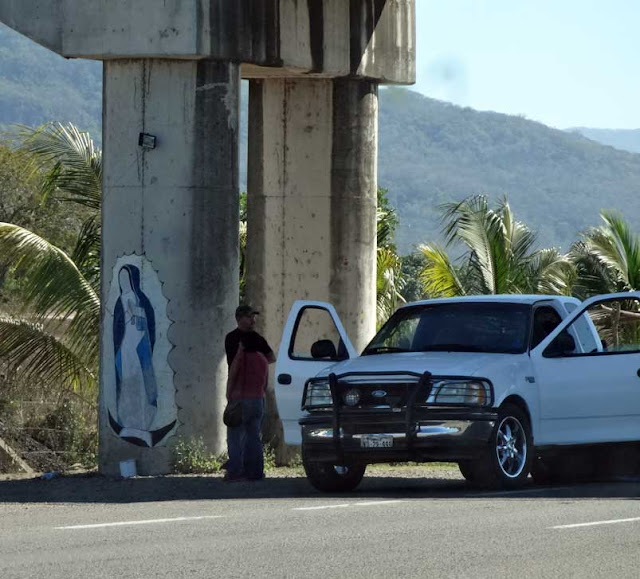 Another inspection point. But no one was inspecting anything. Nobody around?? 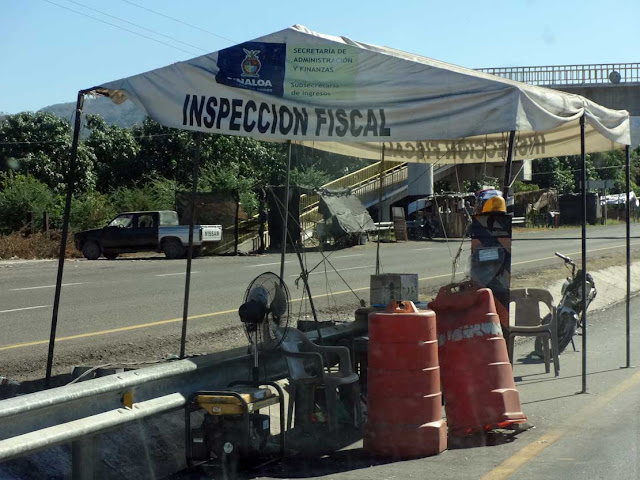 We were going by the area where there used to be many, many shrimp raising farms. Now most of them are dry. Here is a working one next to a dry one. 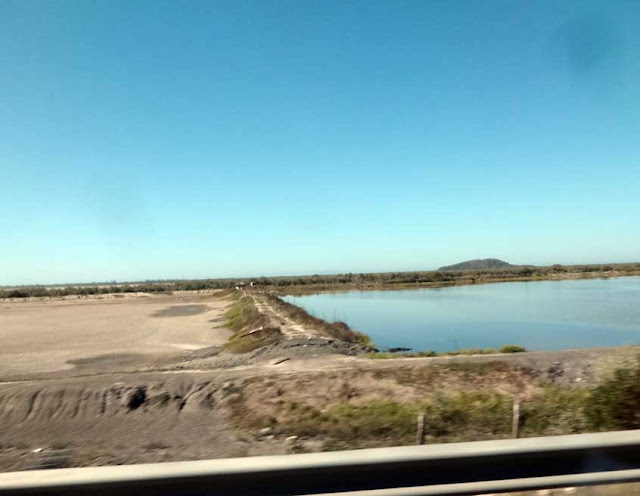 Saw lots of fires burning off in the distance. Hopefully they just burn themselves out. 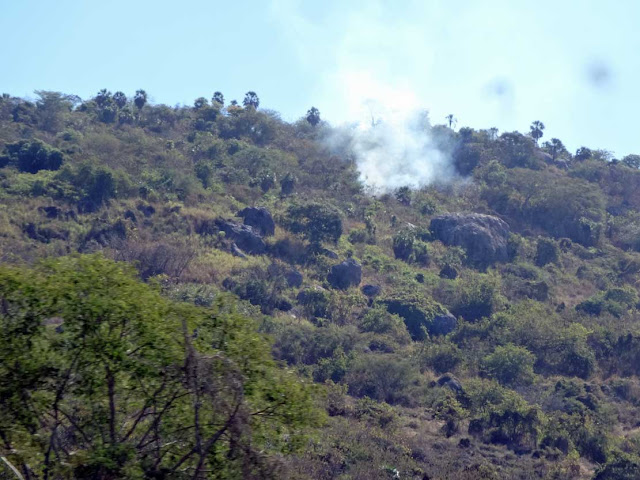 Lots of shallow water on the west side of the road. 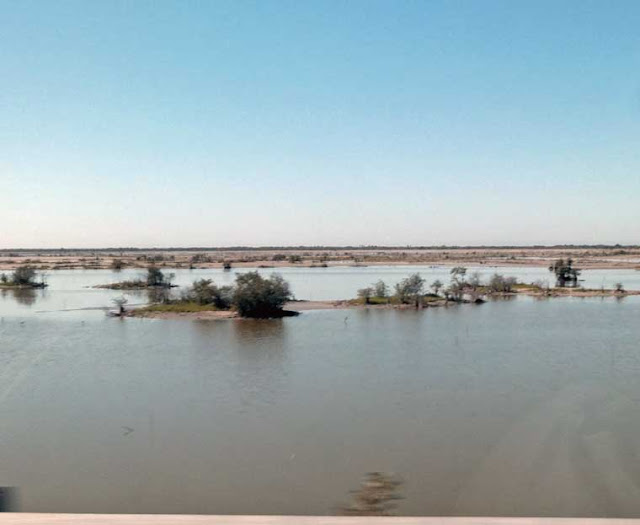 Entering the state of Nayarit. 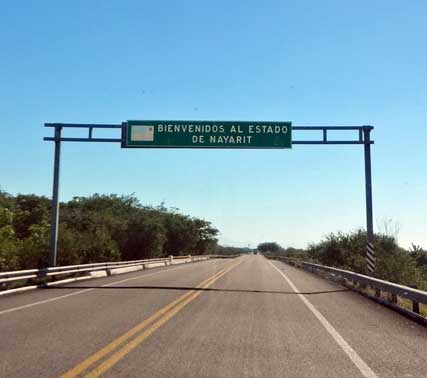 Between Mazatlan and Tepic there are very few gas stations. A new one is being built just south of Mazatan but it wasn’t open yet. We knew there was one about half way of our trip on the 15-D. So we planned on stopping there. The design of the station was not though out well. Had to turn right off the road then a tight left to where the pumps were then another tight right to get to the pumps. It was real clear we couldn’t do it. Would be fine for a car…but…Behind the station were diesel pumps, easy for the big trucks to get to. But they were ONLY diesel. So here we are at a weird angle where the hose is stretched to its limit to reach Arvi. And much to our surprise gasoline is more expensive in Nayarit. 55 pesos per liter more expensive. 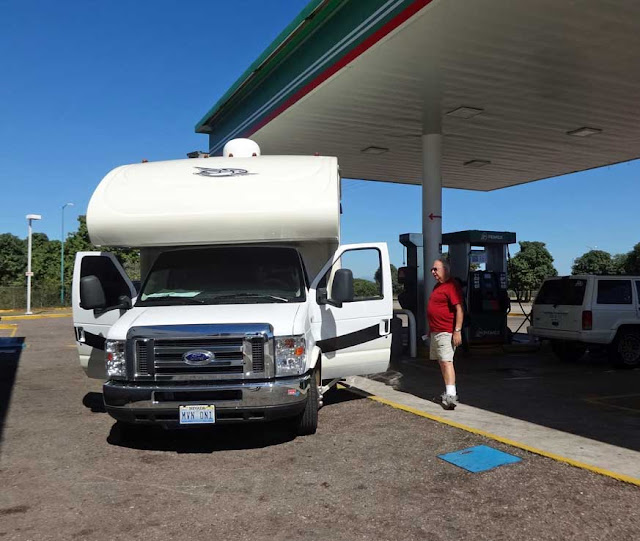 Back out on the road another check point. The car on the right with the door open was really getting checked. Everything out of the trunk and a Federale was looking under the seats. Again if not for the tope we wouldn’t even of had to slow down. 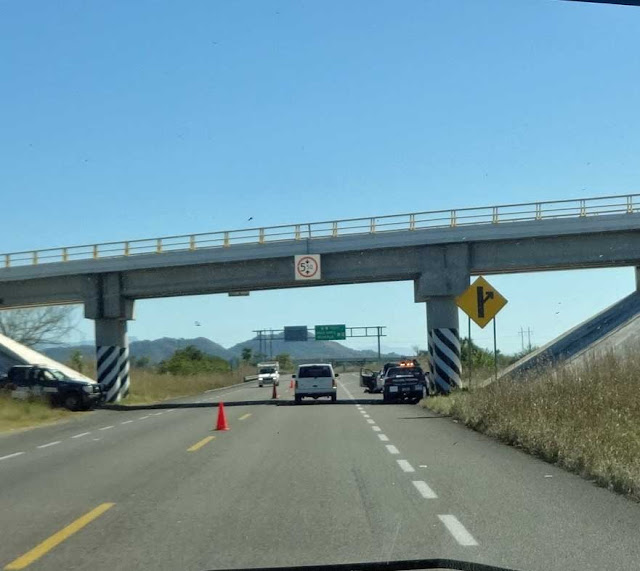 And then the fun part of the trip began. We got off the toll road – and paid another toll on the off ramp! The road was now a narrow two lane with no shoulders. 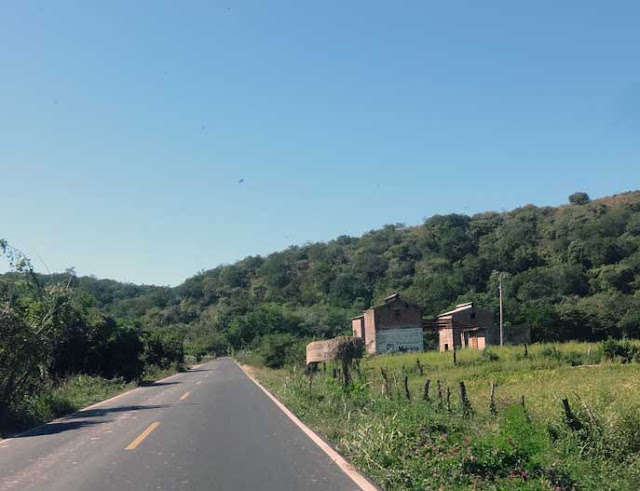 Here we are coming up to a one lane bridge. Bill was going slow thank goodness – see the tip top white of the bus flying towards the bridge. Both drivers had to slam on the brakes. Think we left a years worth of rubber on that road. Both of us got stopped just at the edge of our respective side of the bridge. The bus had a little bit of a shoulder and could get off the pavement a little so he waved us on. Did I mention I hate this stretch of 40 miles. 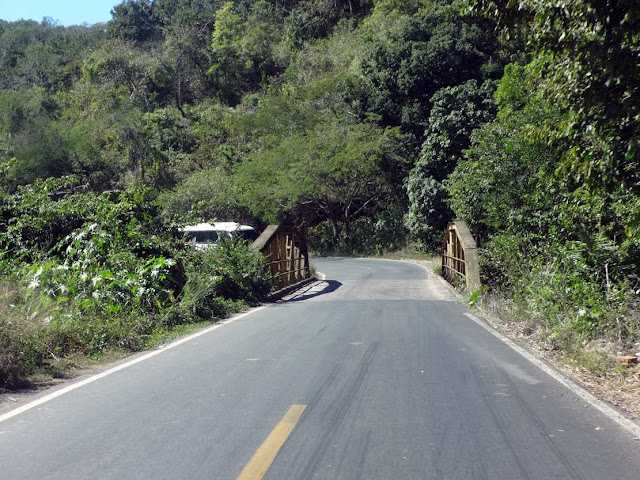 Walking along the road with a sack of aluminum cans on his back. 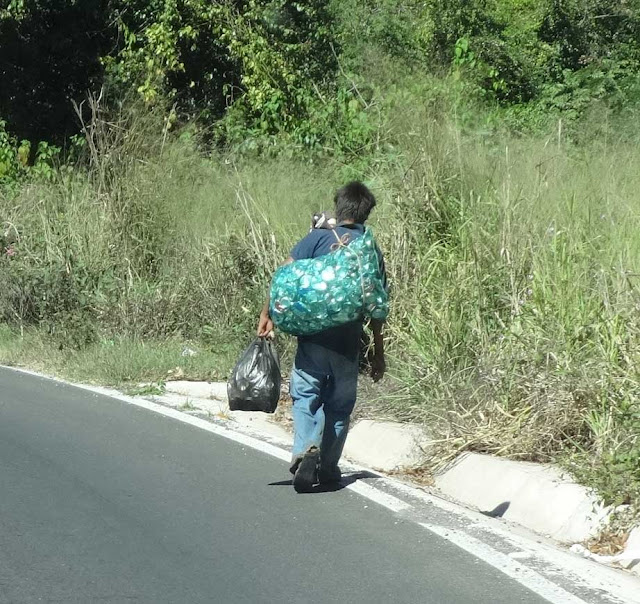 As I said narrow, brush growing over it and no shoulders. Also a few potholes and in the 40 miles there are over 30 topes [nasty speed bumps] and several vados [dips]. 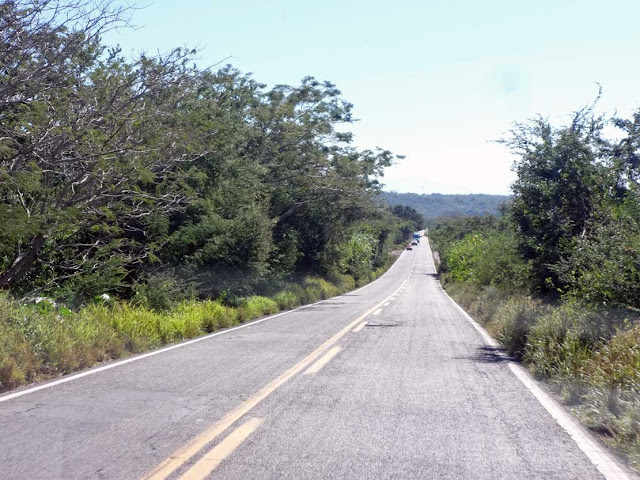 Lots of agriculture along the way. I think this was a rice field as the first one we passed was flooded. 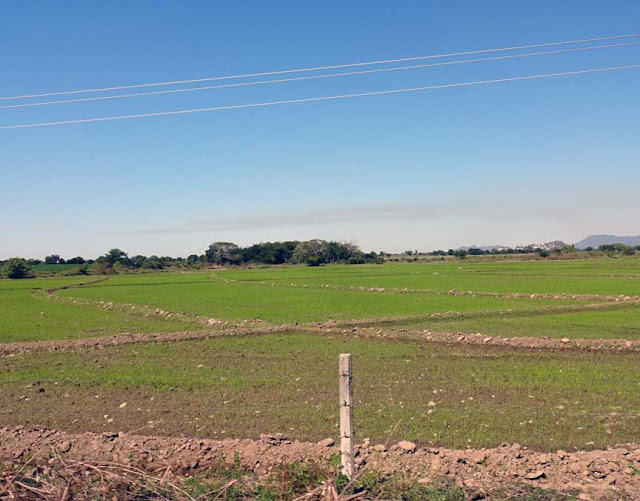 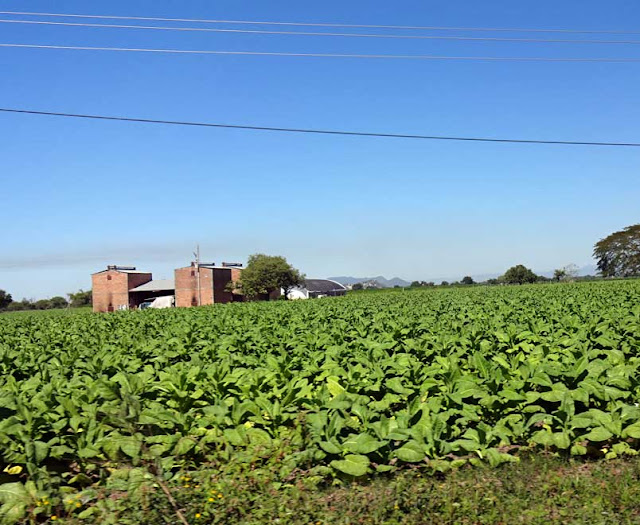 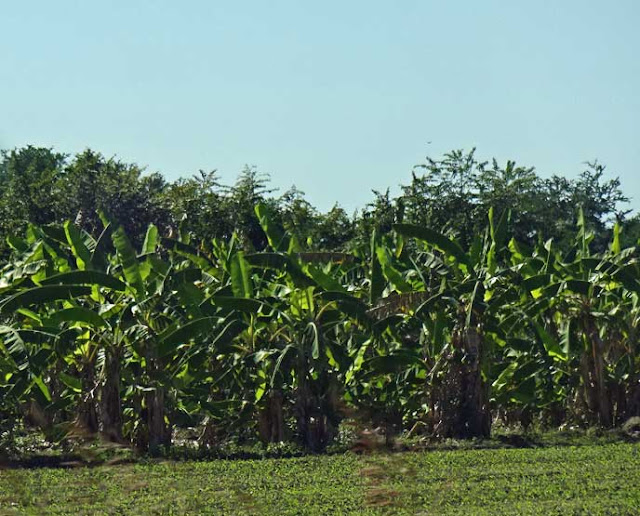 Saw this mural while passing through Villa Hidalgo. Going through town wasn’t as bad as it used to be as the road has been repaved and some of the topes removed. 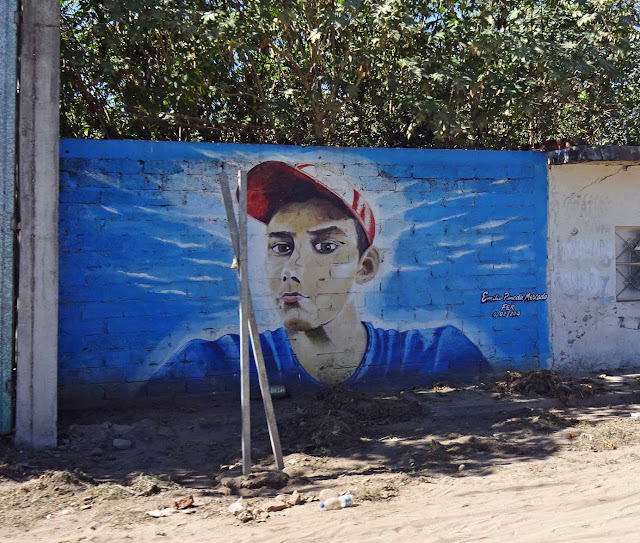 Through Guadalupe Victoria and head south towards San Blas. More topes. Some are easier to see as there are stands selling something right next to them. You can barely see the tope at the bottom of the picture. And yes they are hard to see until you are right up on them. We’ve been this way a lot of times so Bill kind of knows where they are. 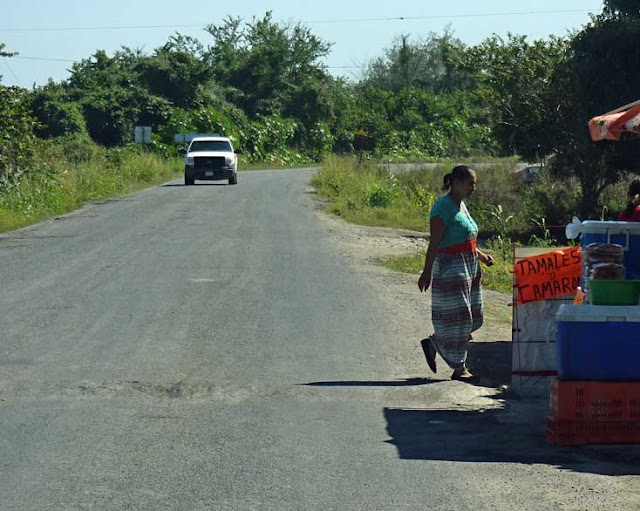 Across the street it was laundry day. 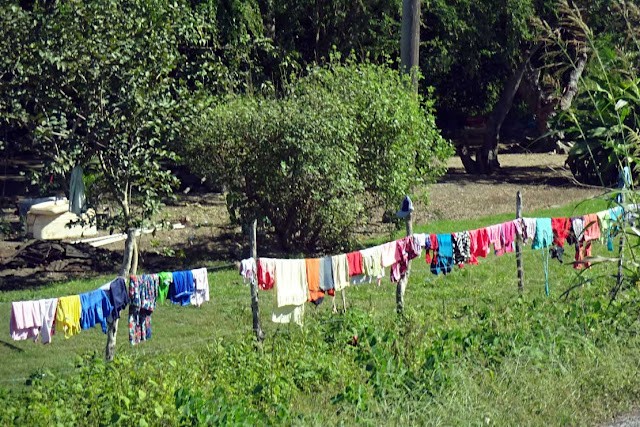 Now we are coming to the vados – the dips in the road. They are old, old concrete and rough. Slow down. Way down. 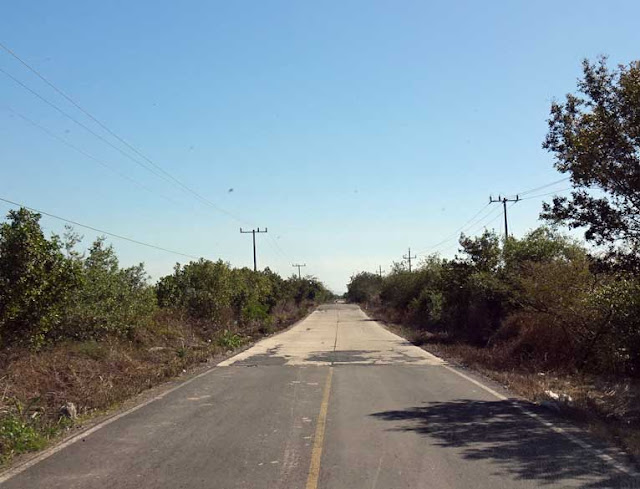 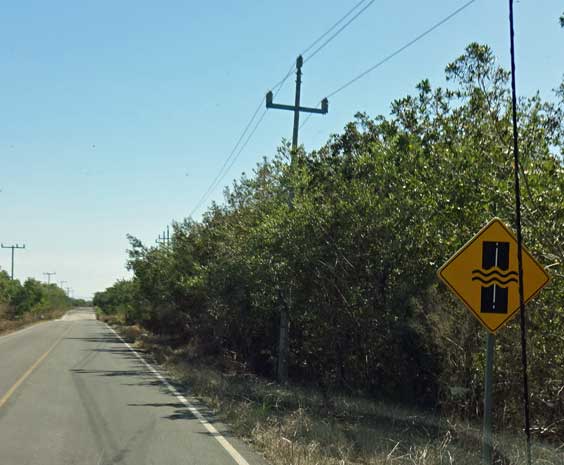 Into and through San Blas heading east through a tunnel of trees – for you George. 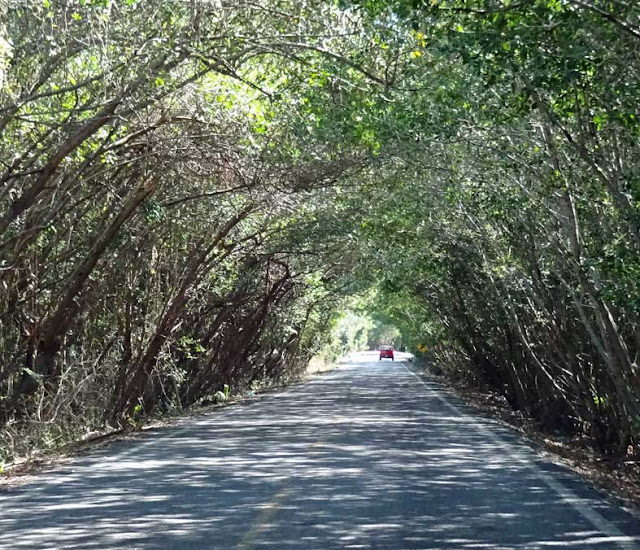 Then another right turn south towards El Chaco. Today I’ll take some pictures of that stretch of road. Under construction. But did manage to take 130 pictures anyway.
Our friends John and Shirley were glad to see us. And they even fed us dinner. Thank you.


There is not TelCel Internet here so will have to go over to the office to post this. Eventually. But we are here.
Posted by Carol and Bill at 12:29 PM