Monday morning, going to be another nice day. And the week ahead looks good too.

Didn’t do much yesterday, stayed home and off my leg, put my package of frozen peas on the knee off and on. Today the bruising is almost gone and the swelling is down and I can almost walk normal. However the foot on that leg was quite swollen last night. Down some this morning…
By 4:30 we both had cabin fever and needed to get out some. So took a drive along the Malecon – guess these guys were waiting for someone to hire them for the night. 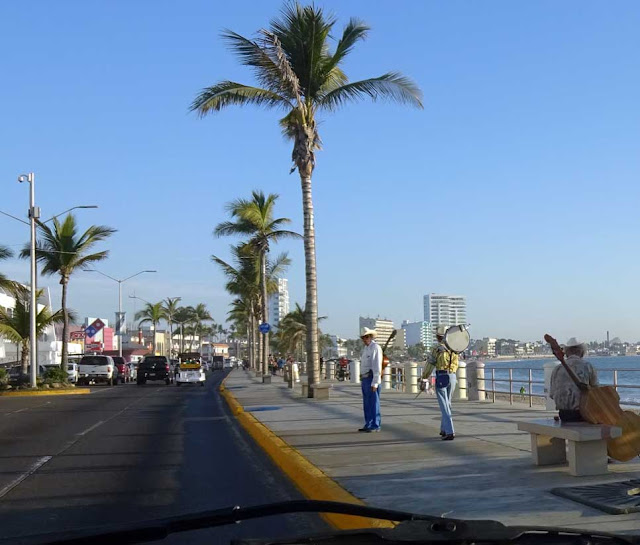 Continued on to the lookout point by the light house but nothing special about the sunset. No clouds. 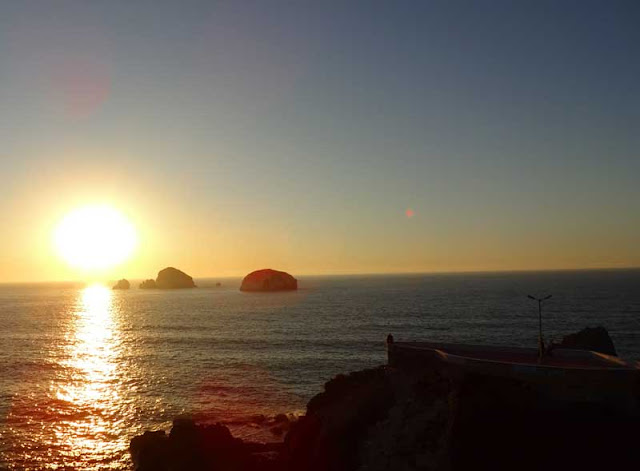 Then we went to the Plazuela Machado area and parked and walked to the Plaza. It was only 5:30 by then so there wasn’t much going on. In fact not much going on anywhere in the city. All the tourists from Mexico have gone home. Hardly any traffic out. The moon over the Plaza. 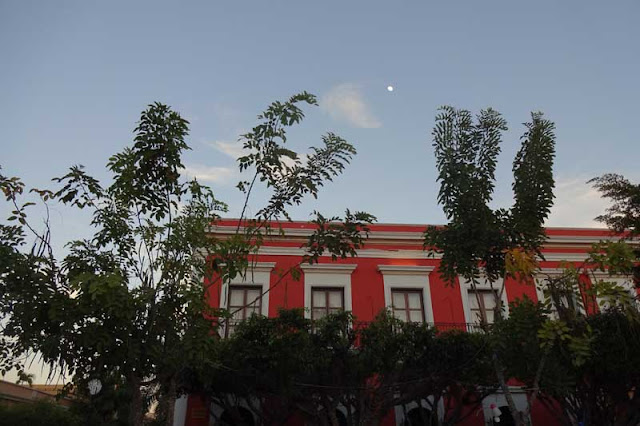 We thought about staying for dinner and to listen to Rafael but it was cooling down quick after the sun set. Neither of us had jackets.
So back in the car trying to decide on a place to eat. At one stop light next to us was a young guy on a small motorcycle. He was carrying two pizza boxes. One had opened up or he’d dropped it. Anyway about half of the pizza was on the ground. When the light changed he was still fooling with the box trying to get it closed. Instead of turning the back end of the box to the front he had the open side facing forward. As soon as he started up the wind caught the box and opened it again. I sure hope he wasn’t a delivery man.
We ended up going to the Torres restaurant for dinner. Good dinner and a very soothing music group playing and singing. And we sat inside.
Been rearranging cupboards and freezer and refrigerator. Trying to make things easier to find. Discovered I'd not brought any oregano! or a potato peeler. Other than that not much going on.


Today we need to go to the market and pick up laundry. Tomorrow night our friend from Canada gets in so starting Wednesday we’ll be busy again.
Also have got all the problems with the laptop straightened out. Finally got my web page back up and running. Had to work with the hosting company. Took about 10 e-mails back and forth.
Posted by Carol and Bill at 3:49 PM

Just getting caught up with your posts. I have been on call for a very sick friend who has just now been diagnosed with stage 4 cancer.

PS, meant to say that I am happy that the crowds have left.

I found out last month that my very best friend was diagnosed with breast cancer just after we got on the road. She caught it early tho thank goodness.
Also glad all the traffic is gone.