First let me say it is so nice to have Willie up and running again.
Back to our shopping day, Sunday.  This is a really small store next to the Central Market. Two people can’t pass in the aisle. Dry goods, canned goods, lunch meat and cheese and a cold case for milk and other important drinks. 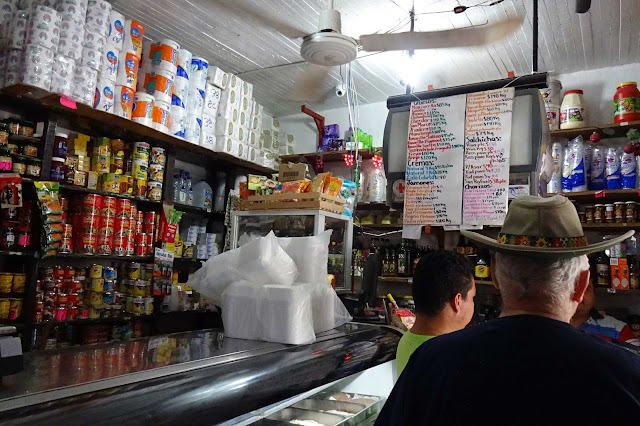 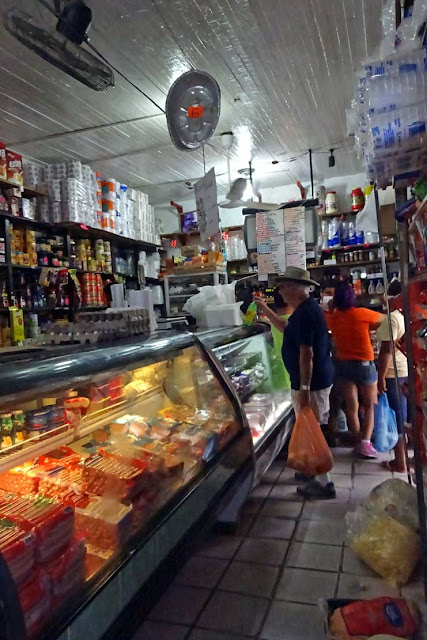 Then before heading home we HAD to stop at Juan Banana for banana bread. YUM! They make the best ever. 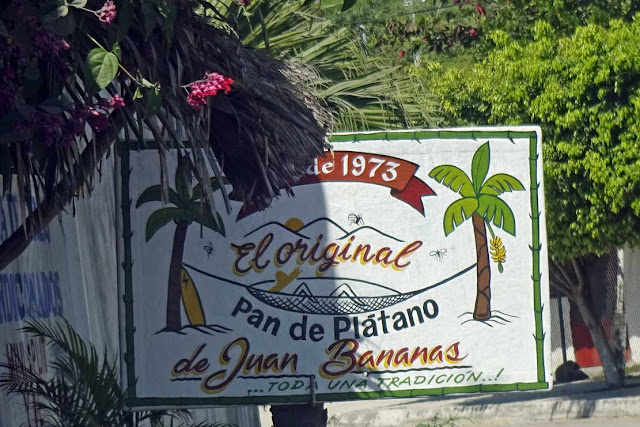 On home to put things away. Later that evening we went back into San Blas for dinner at a restaurant. The sun was just beginning to set. 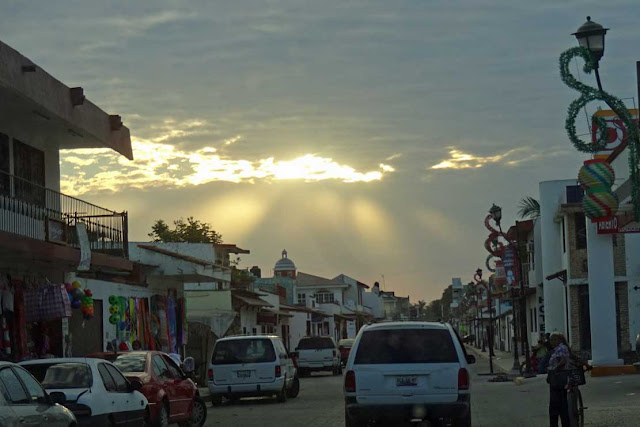 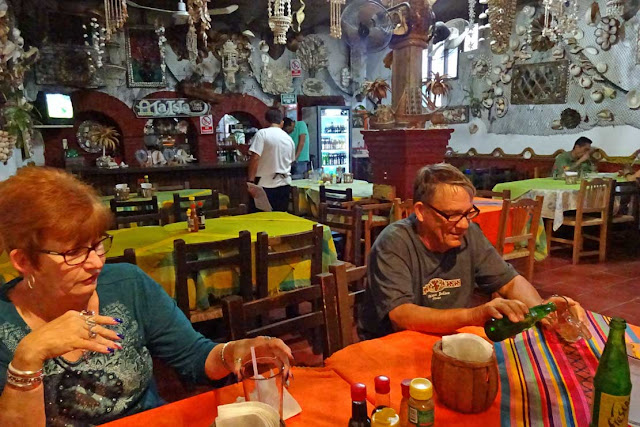 The sunset turned out to be very pretty and of course couldn’t get a good shot of it. 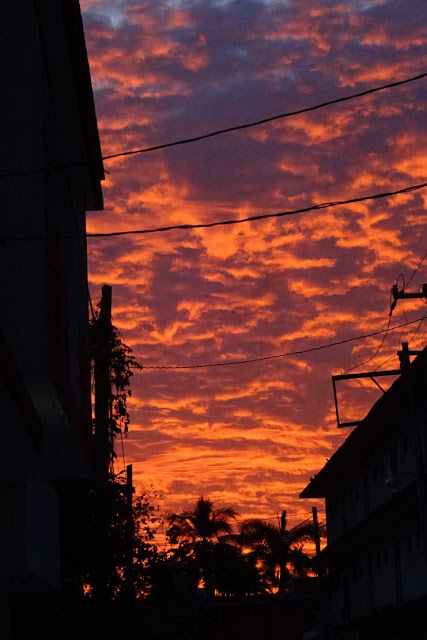 Monday, waited most of day for the mechanic. Ended up putting the old shock back in. Couldn’t find the right size in the big city of Tepic. So we still have some noise but no danger of losing the wheel. The broken bolts have been replaced. Everything should be fine until we get home or maybe find the right size shock in Mazatlan. So no more rough off or on roading for a while. 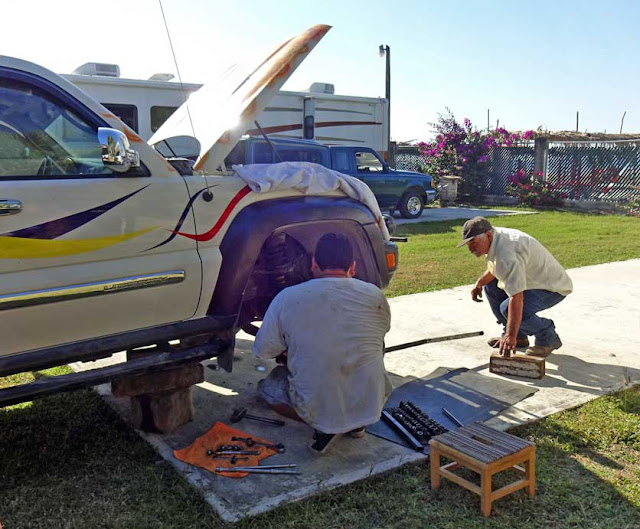 The mechanic’s tool box has seen a lot of repairs. Gotta love the people of Mexico who do great jobs with few supplies. 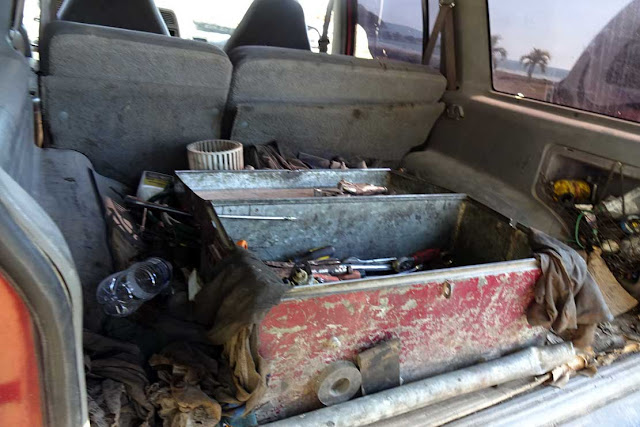 And there is Willie all ready to take a ride. We now have a small clink instead of big CLANKS! Didn’t realize how bad the noise was until it isn’t making it. 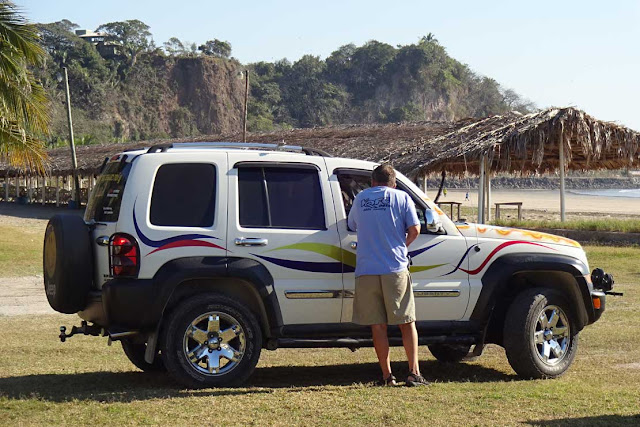 Late afternoon we all went into San Blas to go to dinner. Went to Walla Walla. 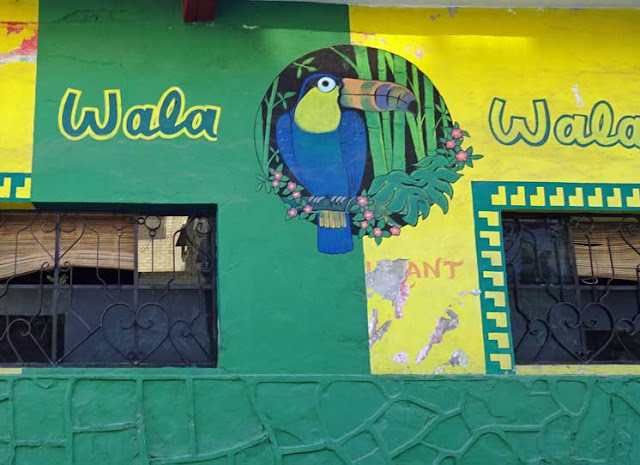 Even managed to find a parking place right outside it. After having to take several detours because the two main intersections of town were blocked off. And most of the streets are one way going the way you don’t want to go. Ended going down one block the wrong way turning right onto the main street then backing up around the corner then parking across from the restaurant. Just got parked when two Transito Policia came by. Good timing. They probably wondered why we smiled and waved at them.
I like the floor in the restaurant. 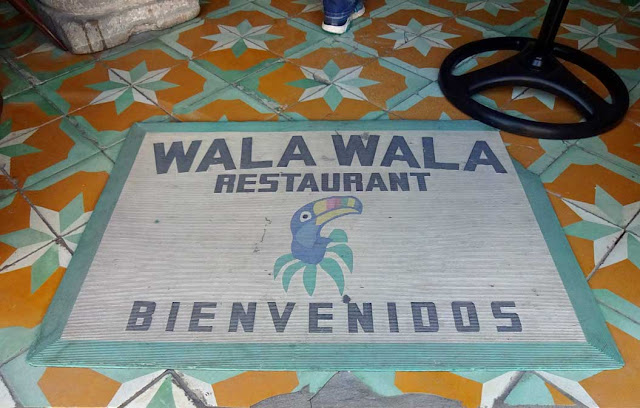 And the décor. Lots of flags and colorful furniture. Food was very good. I had chicken with peach sauce, rice and green beans. Also ice tea – they brewed it and added ice. 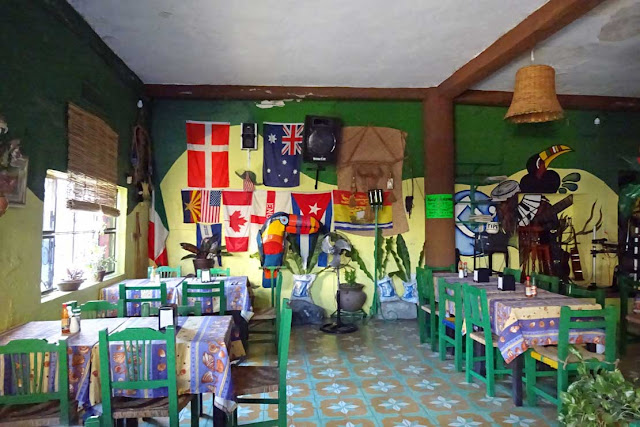 Saw this older woman walking down the street with a bowl full of something on her head. 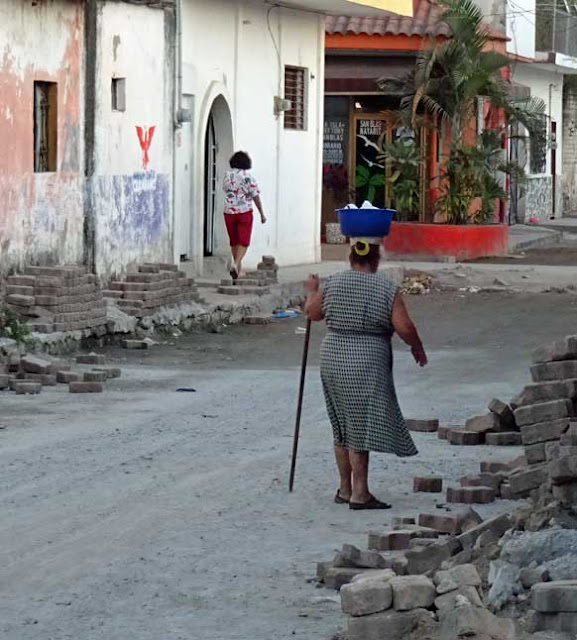 After dinner we waked a block down to the plaza to see what was going on. A couple of years ago the whole main street was remodeled. All the buildings were repaired and painted white. They all have the same style of signs. Actually looks kind of nice. 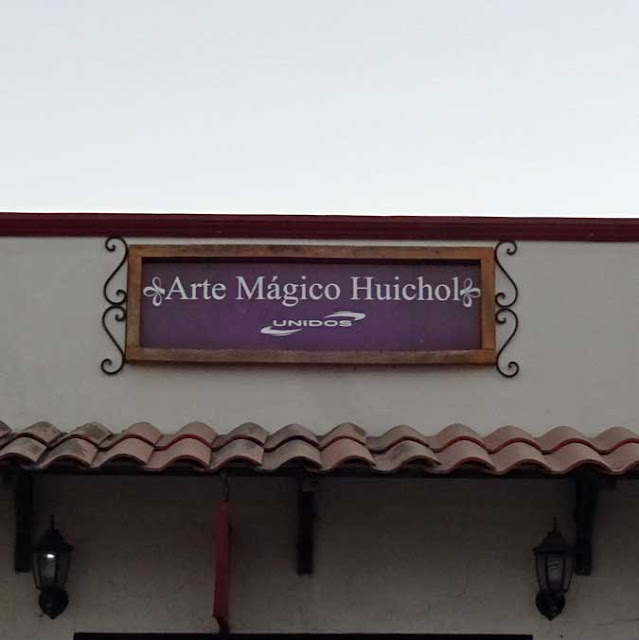 Two different stores and something upstairs. 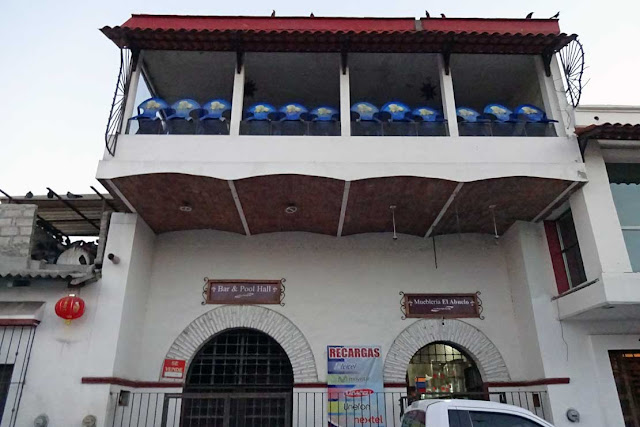 Why the intersection was closed. Getting ready for a BIG fireworks show. 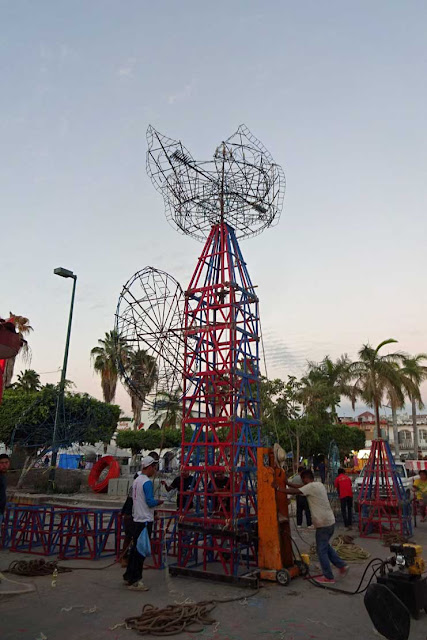 They were building a big fireworks tower. It is built of red and blue squares one piled on top of the other.
The web looking things at the top and on the sides have the fireworks wired to them. Here they were getting ready to add another square. They have a forklift that they maneuver the tower on, it lifts the whole contraption high enough to put another square under it. And up and up it goes. 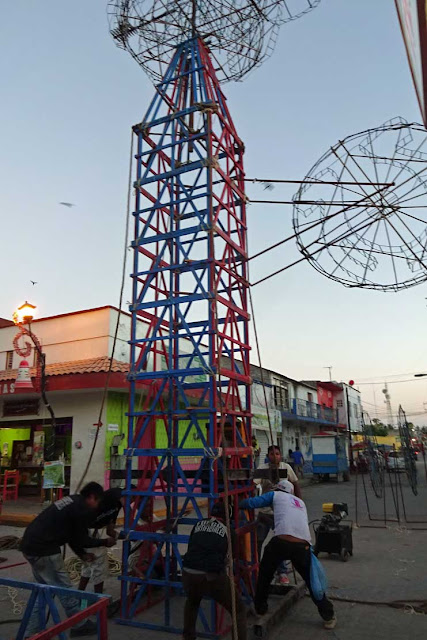 Squares waiting to be added – remember they are added to the bottom as the already there squares are lifted up. They are held together with pieces of rope. 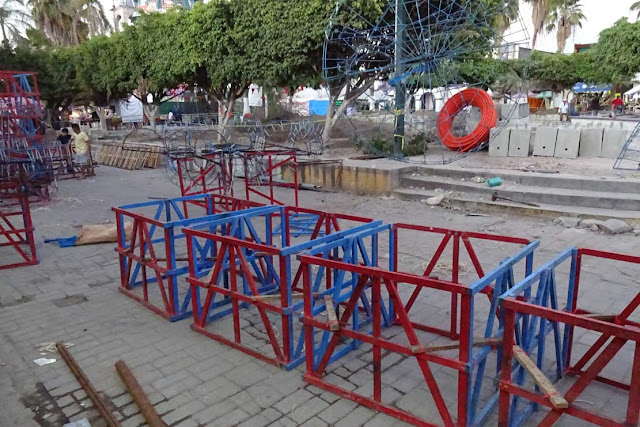 Some of the fireworks. 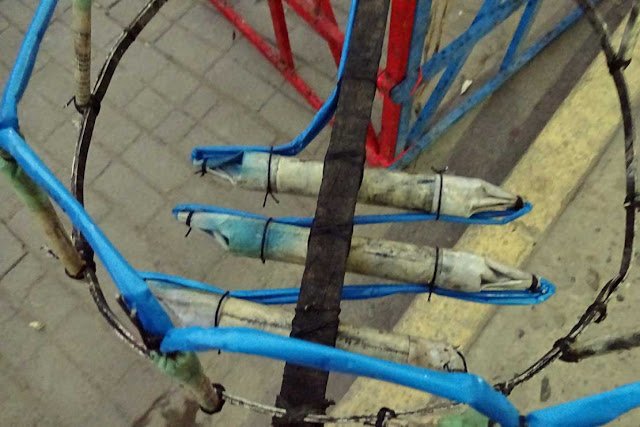 The plaza and streets were full of vendors. At nine o’clock there was going to be the kick off to the Bird Festival. With bands and fireworks.
Bill and Melissa again. 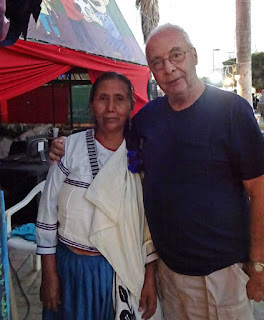 Just a small fraction of the vendors in the plaza. The girls in the lower side of the pic are getting henna tattoos. Looked like fun. 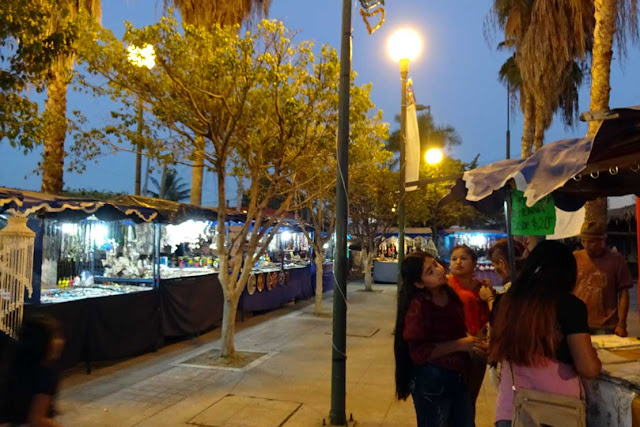 The government building still decorated for Christmas. Things won’t come down until after the Festival. 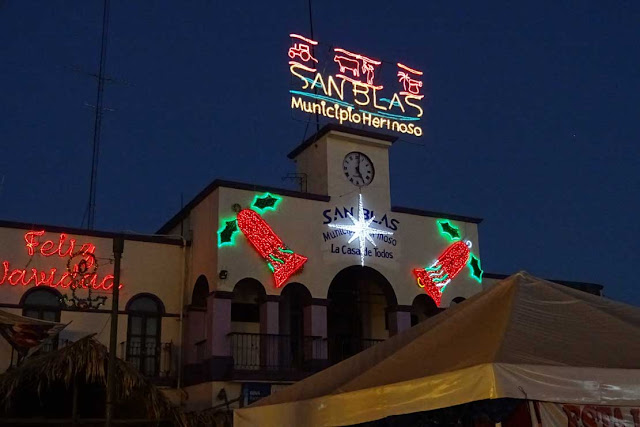 This is the churro man. His grease is hot and waiting for someone to buy some nice crisp fried churros. He makes some of the best ones we’ve had. 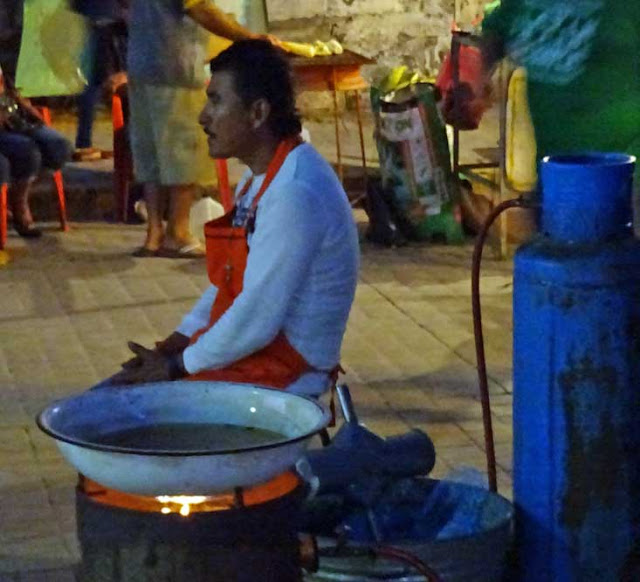 More and more vendors were showing up as it got later into the evening. Mostly with food and or snacks of some type. See the girl with hers on her head. 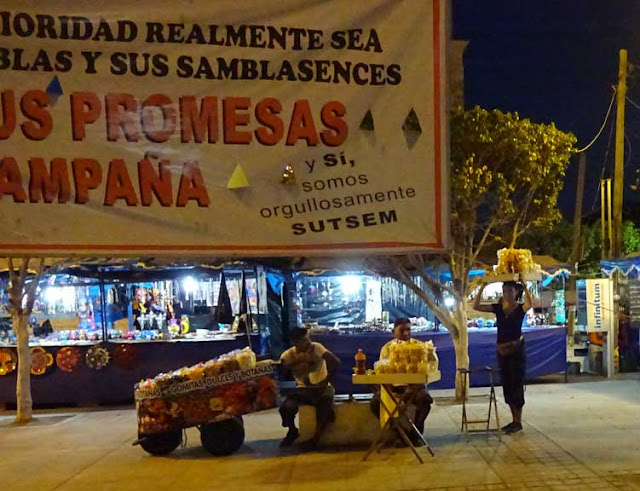 Walking back to the car, more of the fireworks display still needing to be put up. 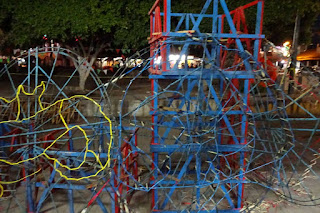 They continue adding squares to the bottom of the tower. Tall enough now it needs more support with the ropes. 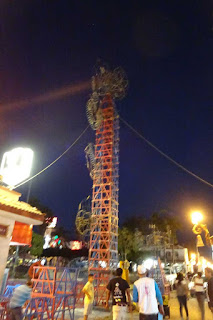 And on home.
Got up about 5 minutes too late this morning to see the full sunrise, bet it was really pretty. Did catch a few shots of it. 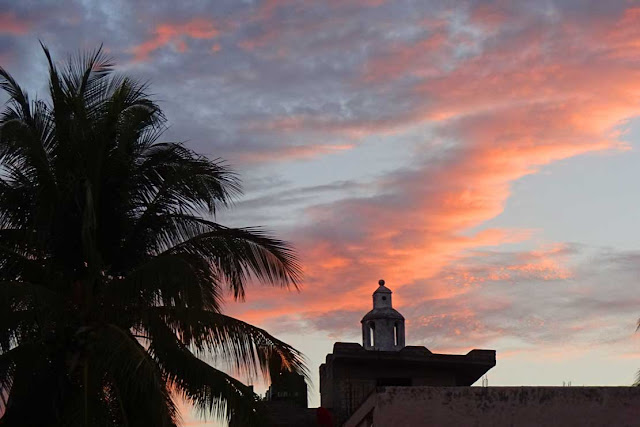 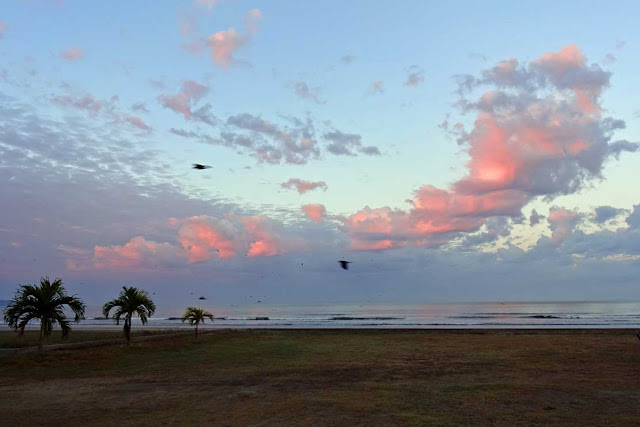 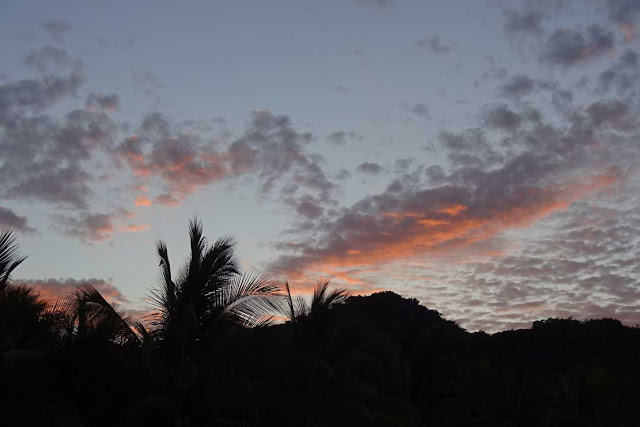 No plans for today but we’ve got the car so will do something. Every day my knee feels and looks better. Almost all bruising gone and only a little swollen still.


We will be here until next Monday. Have to get our coffee we ordered on Sunday. Sure wish the government would open the new toll road up the mountain before then.
Posted by Carol and Bill at 4:25 PM

Seriously, a great shot of that sky on fire sunset.

I so appreciate the time it takes for you to post, mille gracias.

If you are in the mood for BBQ Chicken, Roman makes the best in San Blas. He is on the street not to far from Juan Banana's.

by the time we get back to Mazatlán my hair will either be all pulled out or gray just from the Internet here. Thank you for commenting.

Will have to check it out. Place name Roman?