Out and About in Mazatlan

Didn't do much of anything Saturday so will go back a few days for pictures and comments. We did watch an amazing Barcelona soccer game. Amazing goals made. And I cooked paella again - but this time for lunch/supper.
When I talk about going from the RV park to the Centro Historico the blue line is how we usually go. Sometimes if there is lots of traffic the gray lines can be used. 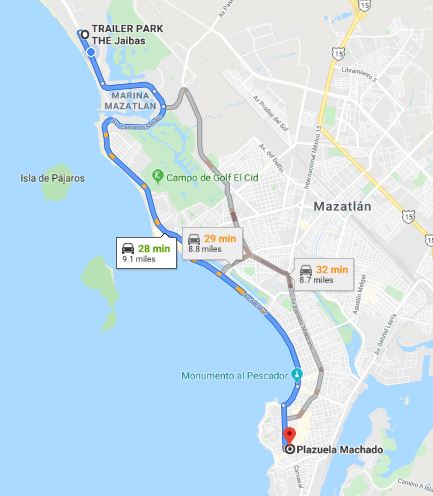 The first picture [I took it the other day] is of a “road” up on the hills across from where the divers dive. We’ve looked at it for years. Bill has always said it looked like it was an old road. I didn’t think so. Well he was right. Here is the old picture of it. Notice the old Fords and pedestrians on it. In the 1920s the first cars in  were Fords so this was an area the Ford owners took their friends to impress them. 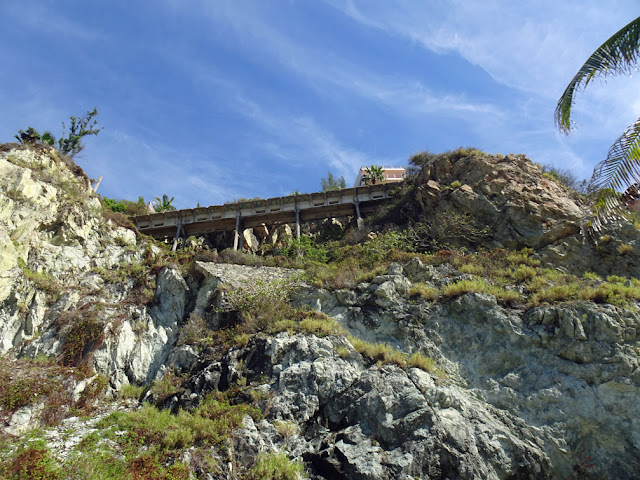 How it looked when first built. I don't think I'd go out there. 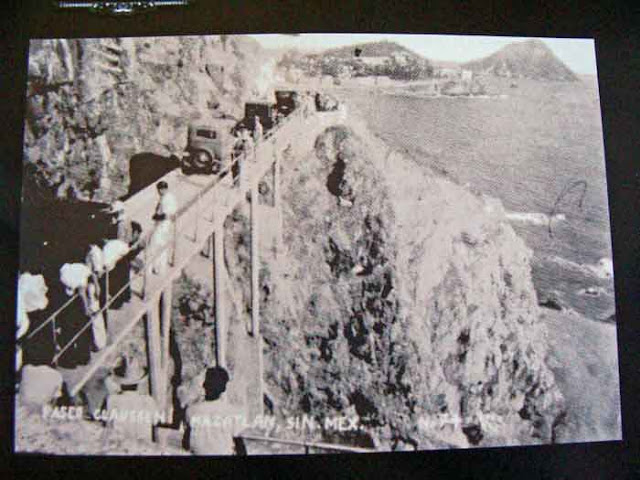 Just a look at the area along the Malecon with all the high rise condos and hotels. 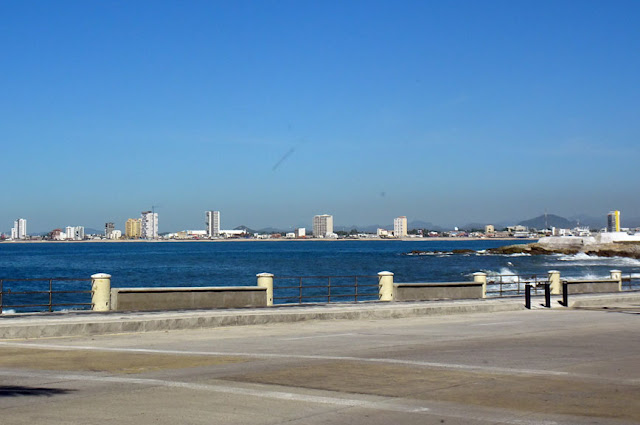 Las year there was some talk about restoring this building. But doesn't look like anything is being done except it is getting more decrepit. At one time in it's useful life it was a casino. 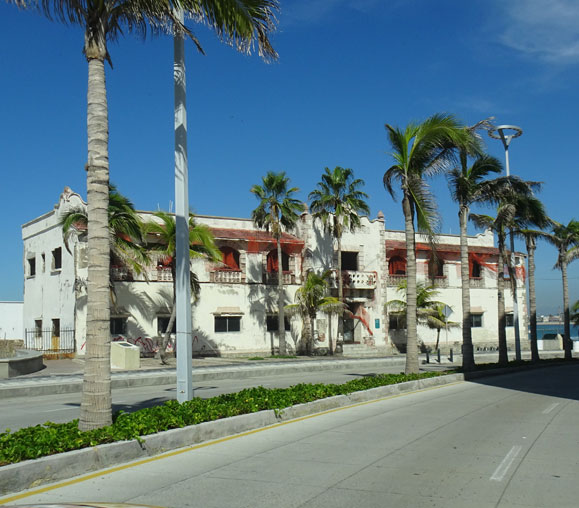 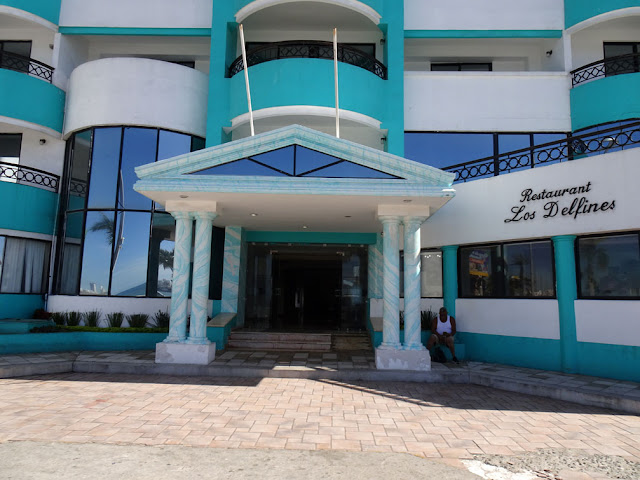 Have a bus. The empty lot was supposed to be made into a parking lot for people who want to walk the Malecon. Someday maybe it will be done. 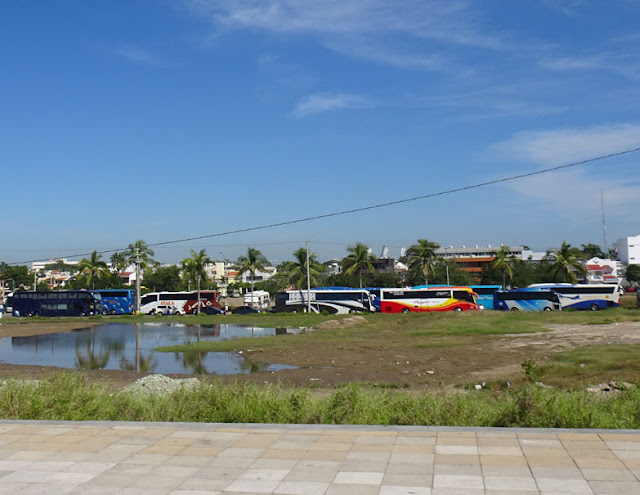 A lady walking down the street with her children. She had a load of things to sell. 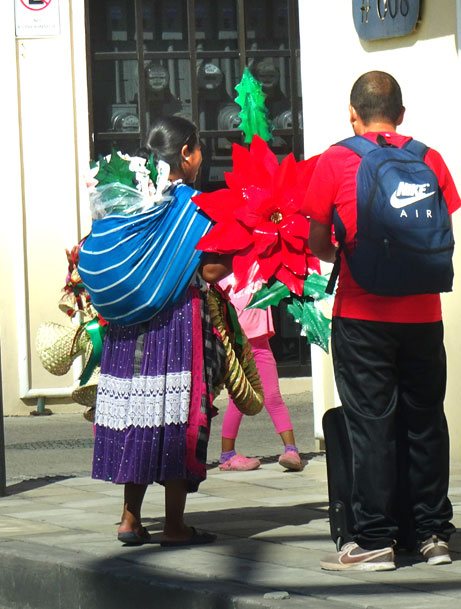 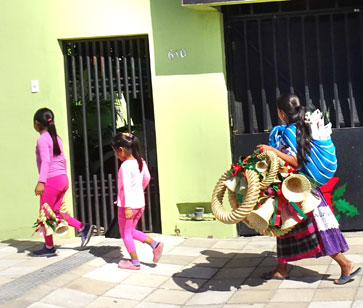 Looking across the highway and  bike path towards the islands. Notice how clean everything is. No trash at all along the Malecon. And the blue strip is a bike/skating path. 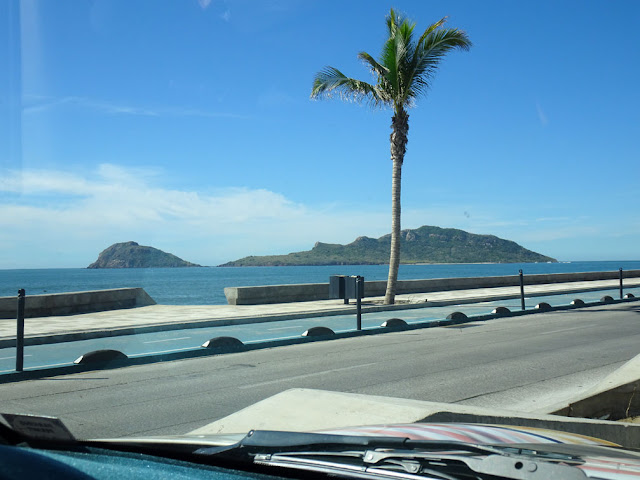 A shot of Valentinos. Mostly empty now. Used to be full of nightclubs and discos. And at night it had different colors of lights illuminating it. Some talk now of building a walking path/road out and around it and of trying to get someone interested in occupying it. Sure hope so. Would hate to see it erode. 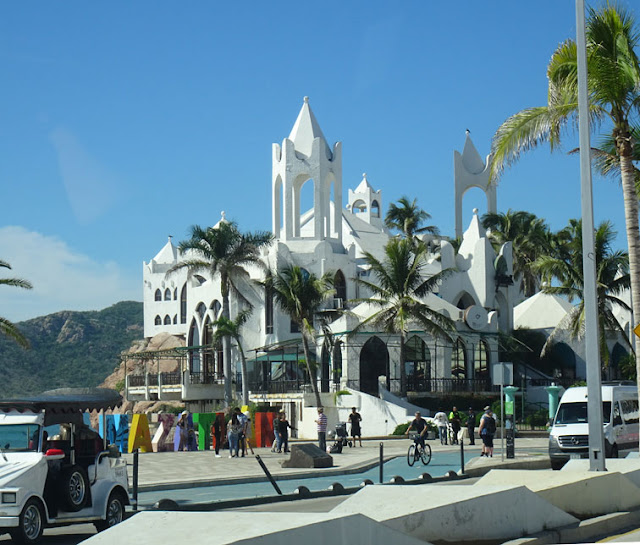 Another colorful high rise in the making. There is so much high rise building going on in the area. 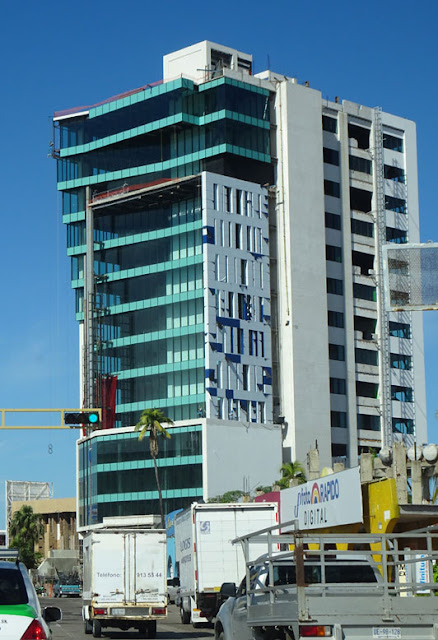 Bill took the turn to drive down through the Golden Zone and actually found a parking place by PinUps. A lot of painting has been done to the Panchos area. So colorful now. He stopped to talk to the Pulmonia drivers and I walked through tot he beach. 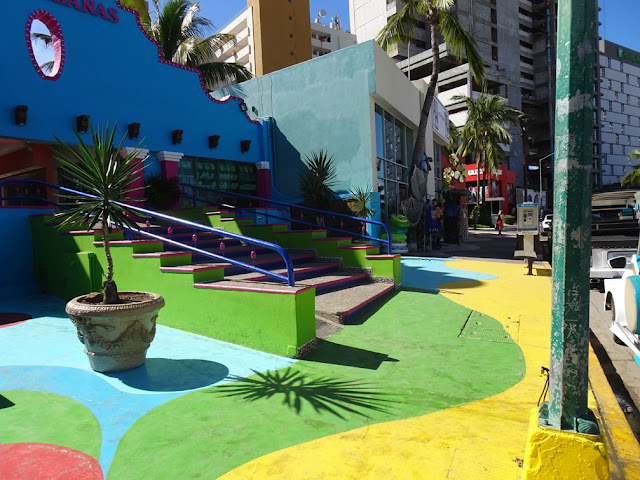 Looking down at Bill and the parked Jeep. 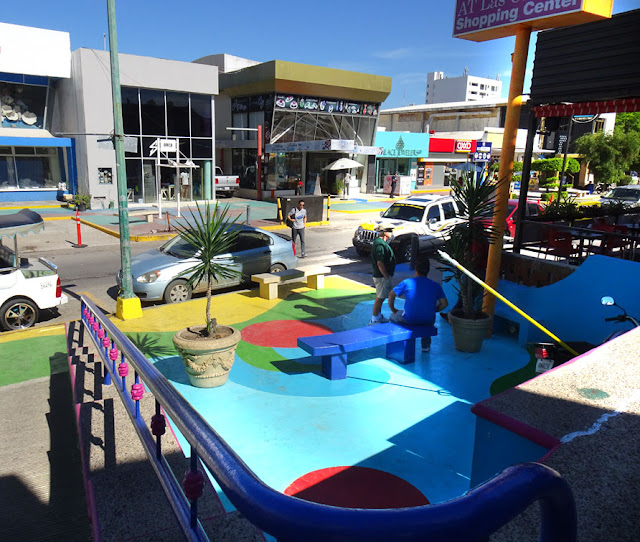 I am posting this particular picture because of the pink columns. Did you know about Mexican Pink? 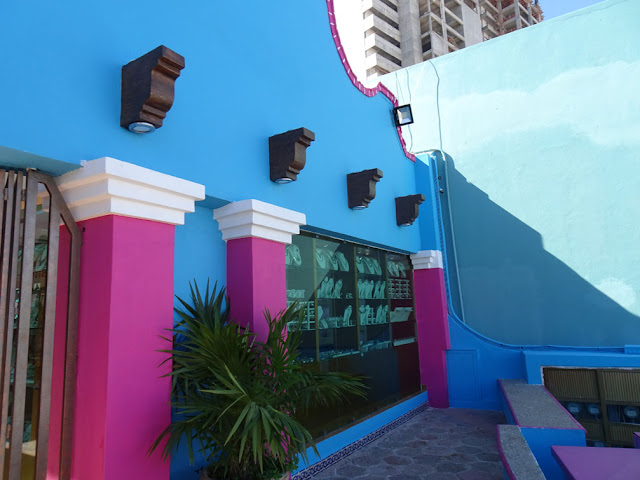 Well here is some information about it. Since 1949s, the shade of pink that we know as “Mexican Pink” has been an important symbol of Mexico because, together with other elements of our culture, it helped to create at that time an identity of its own. Even today, in our country, it is easy to find this tone everywhere, a kind of intense magenta color that floods the streets and objects of cities and towns -from toys and accessories in the markets to houses covered in clumps of pink flowers and some of our most precious architectural works.  Click here to read the whole story about Mexican Pink.
Walking past the fountains and by the stores to get to the beach. I like the tile benches. Also noticed everything has been repainted. 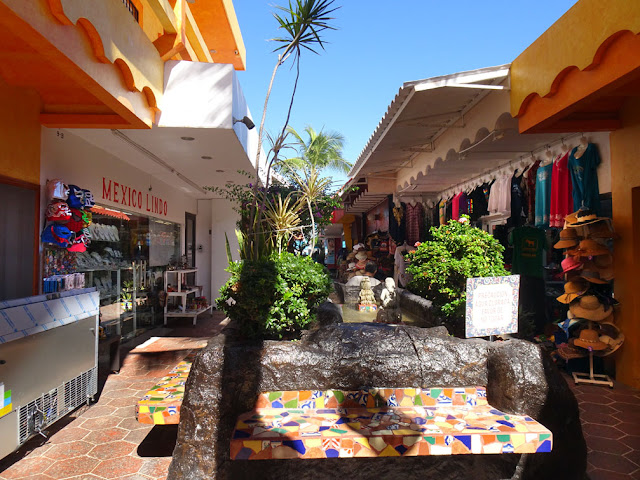 I think these are new tile murals outside of Pancho's 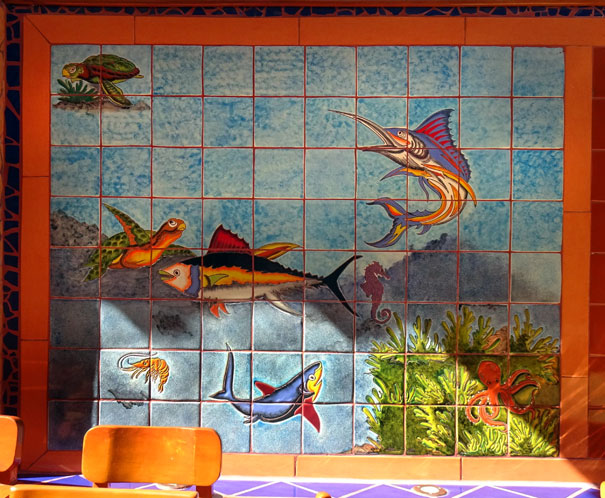 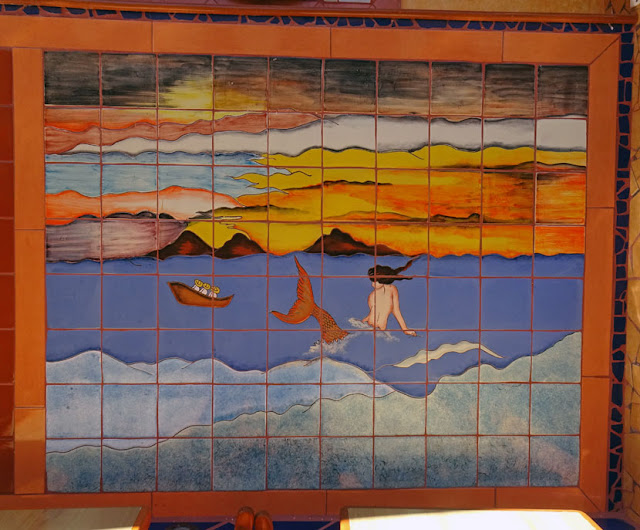 Took and sharing these just because I liked the colors and lines. 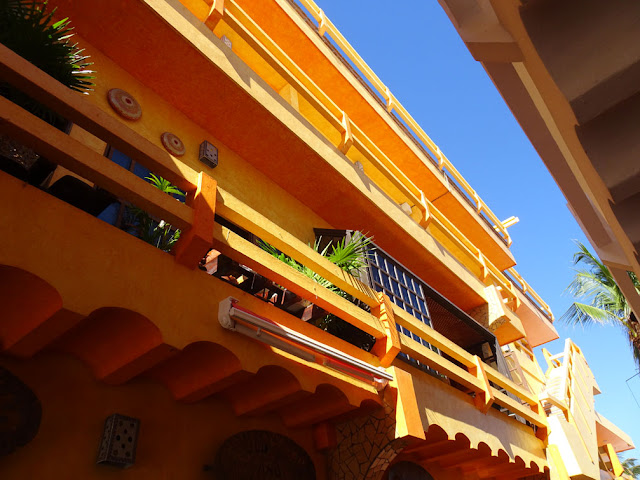 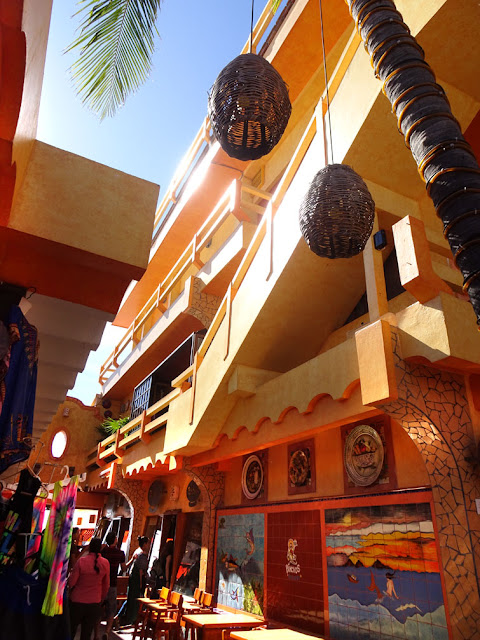 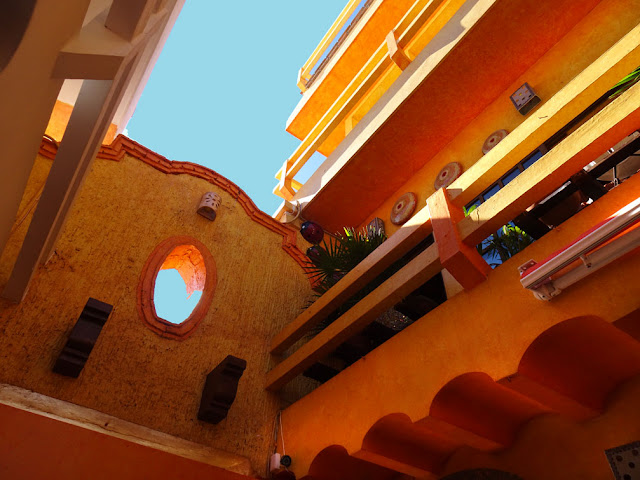 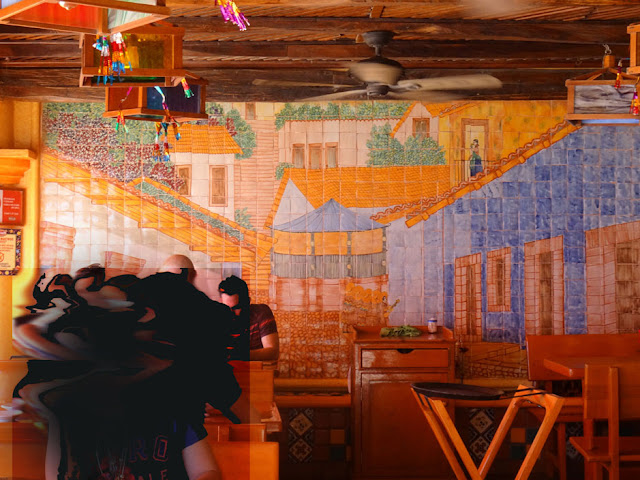 Inside one of the shops. If I had a place to put them, I'd buy one of each just for the color.

One of the fountains in the walkway. 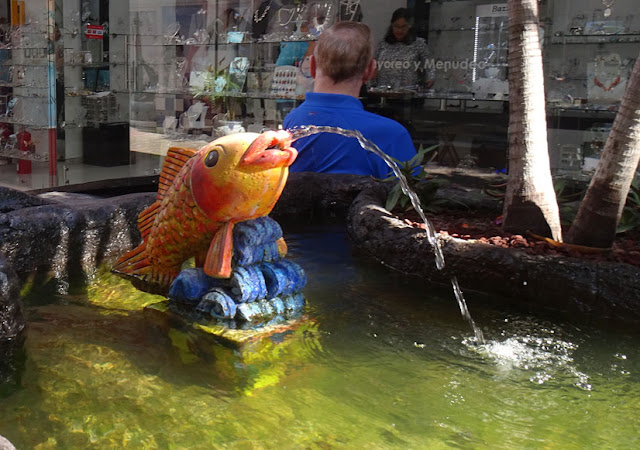 From here we went home to relax and just enjoy the peace and quiet of the campground this year.
Posted by Carol and Bill at 8:34 AM

Wow. You are a gifted photographer. Thank you so much!

Love the photos and love all the colors - thanks for sharing