On Monday the mechanic picked up the Jeep to take it to the shop to install a new air conditioning system. We both hate to see it drive away... Got it back early evening. I always worry when someone else is driving it. So always glad to see it drive in. Bill says the AC is working too good now - he almost froze his @-- trying it out. So now the AC is working and the back windows go down and the radiator and water pump are new. Willie, the Jeep, as opposed to Bill the driver - but both - should be good to go for a few more years! 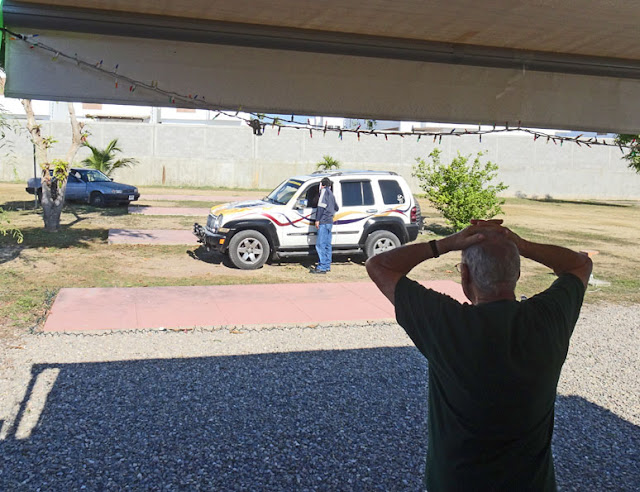 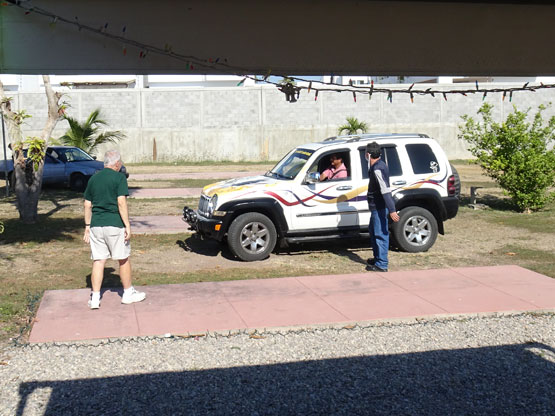 So we were stuck home without wheels - decided to catch a pulmonia and go up to Cerritos to watch the fishermen. Flagged down a pulmonia and realized we'd trotted out to the street without giving a thought to masks...crap. So I started digging through my purse and got lucky and found two that were in there. We both think the price of riding in a pulmonia has gone up some. But they are fun to ride in. This one was pretty fancy. 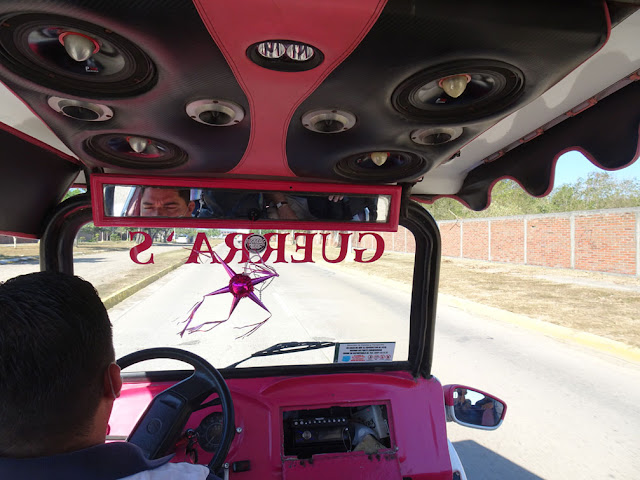 Arrived at Cerrito about 15 to 11. Thought there should be some fishermen boats coming in. But it looked like most of the boats were already there. Later we realized only one other boat had come in before we got there. The rest either came in before the tide went out or hadn't gone out at all. 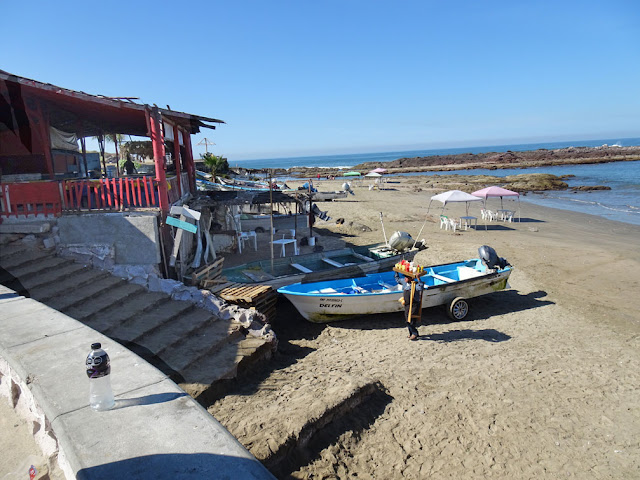 Looks like the oyster guy had a good morning. When we got there there were very few other people around. 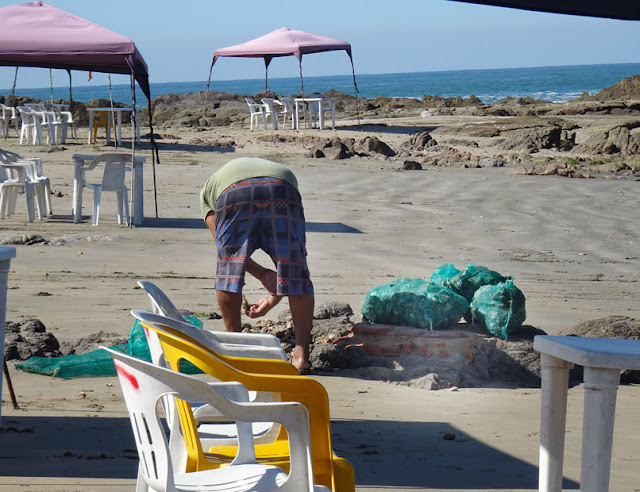 Another look at all of the boats. We didn't see any wheels waiting for a boat either. 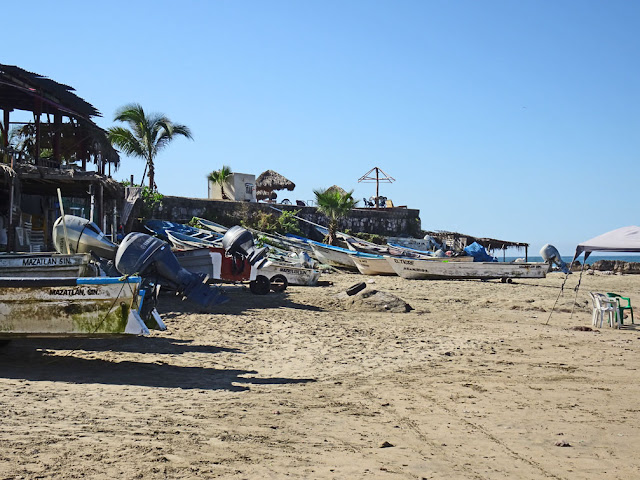 Oh well - we ordered a couple cans of soda and sat at a table for a while. Just people watching. And Bill was getting his drone ready to go up. A few more families showing up. 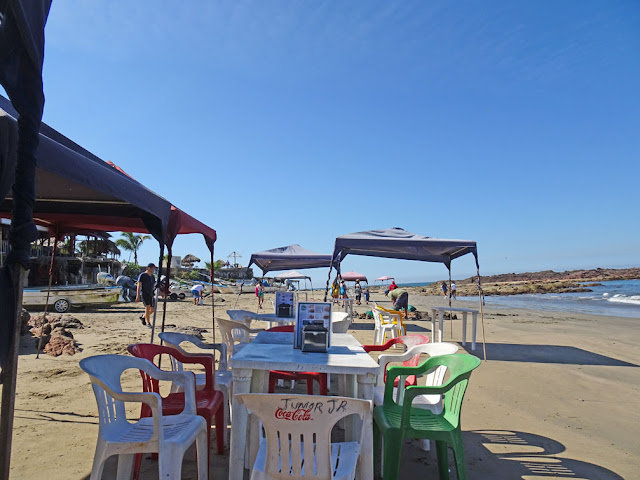 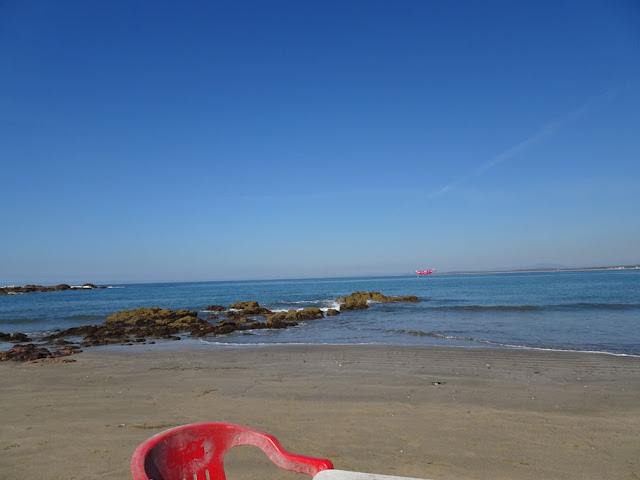 A drone video of the area.  No sound
He has a heavy load of something. 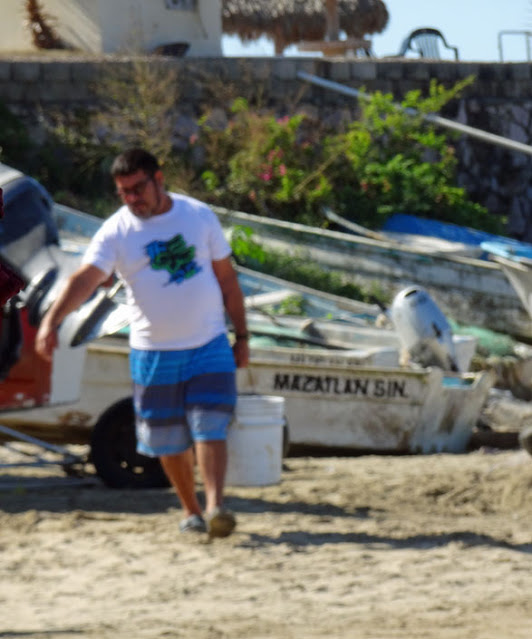 Enjoying the day and the beach. 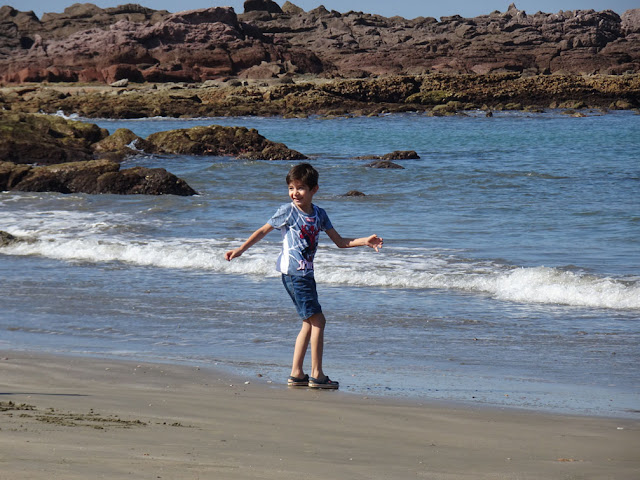 Just about as we were getting ready to leave we spotted a boat coming in. 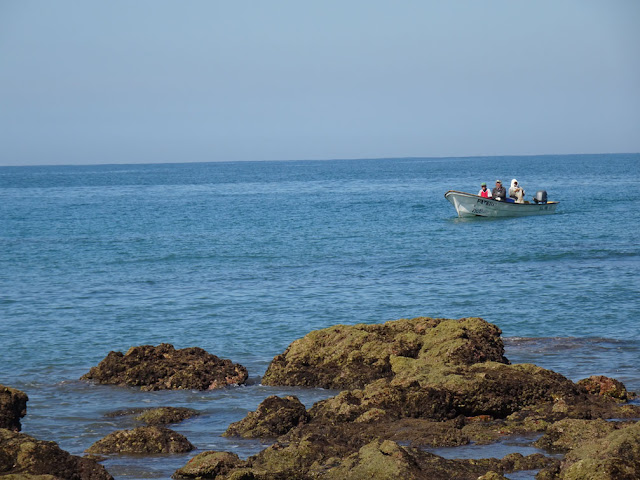 Getting closer to shore, still under power and using the waves to come in. 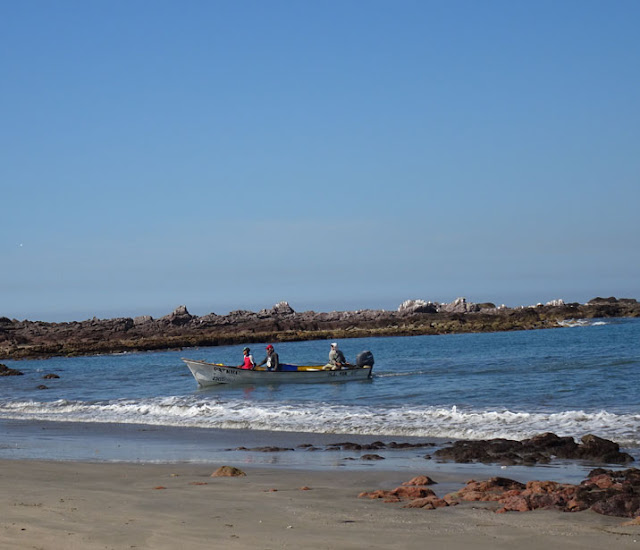 Getting out to pull the boat closer to sand. Engine is up. 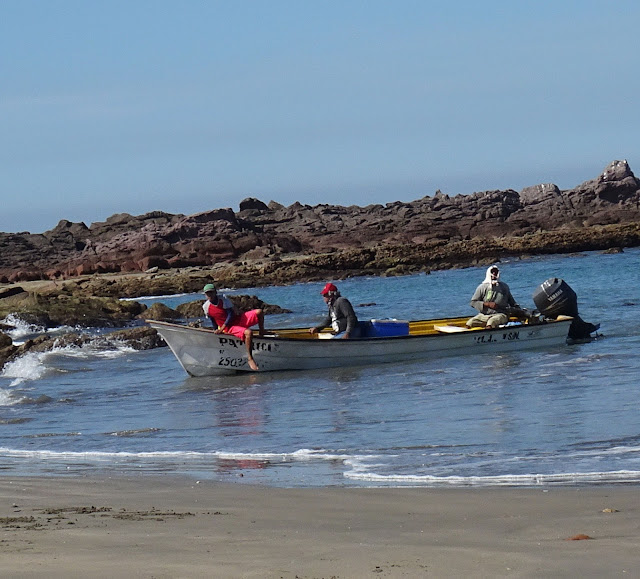 Now it has to be unloaded. 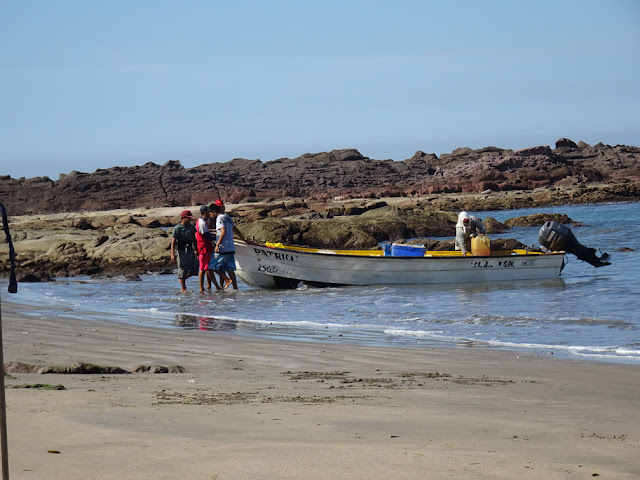 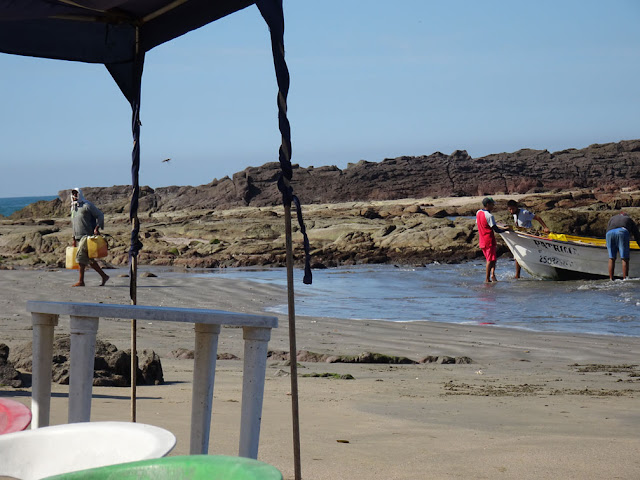 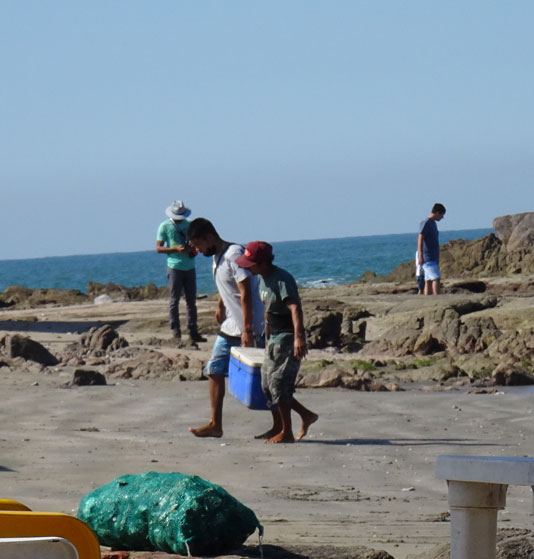 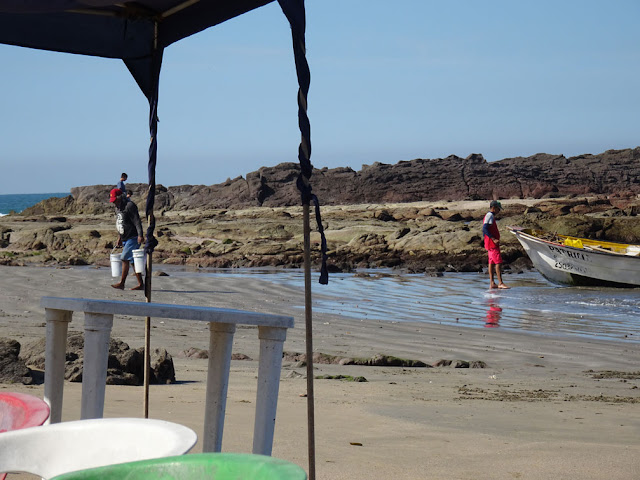 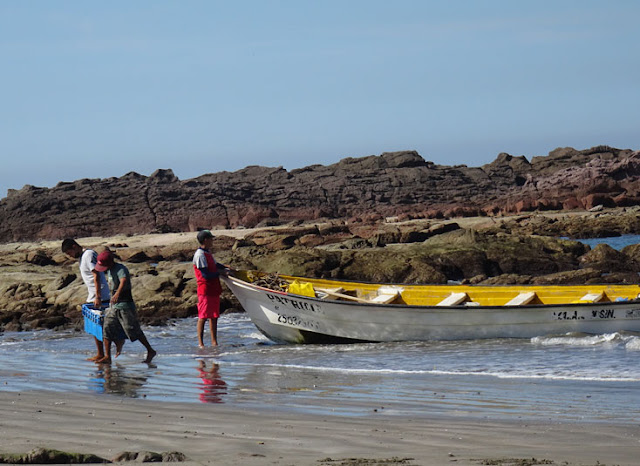 Load after load. I hope most of it was fish. 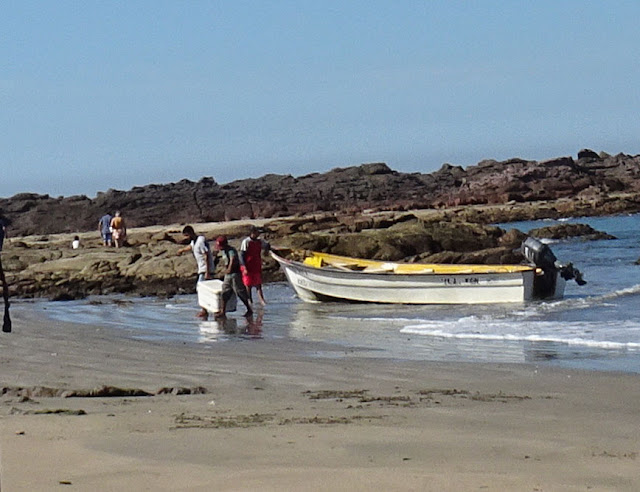 Video of getting the boat up on the wheels and pulling it up on to the sand and parking it. 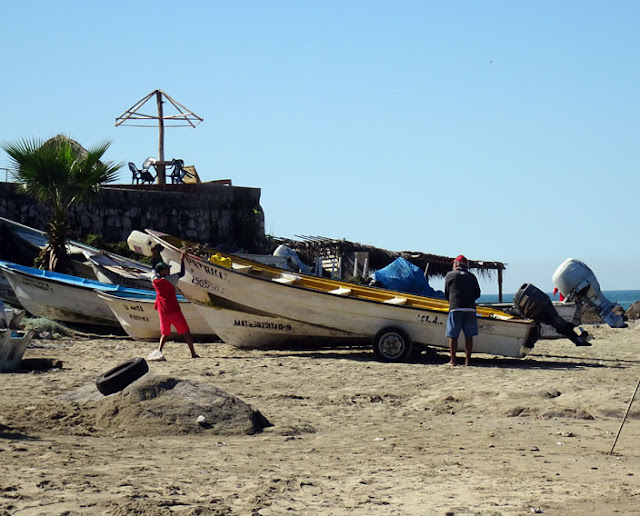 All of the vendor stores were open as were the restaurants. We didn't do any shopping that day. 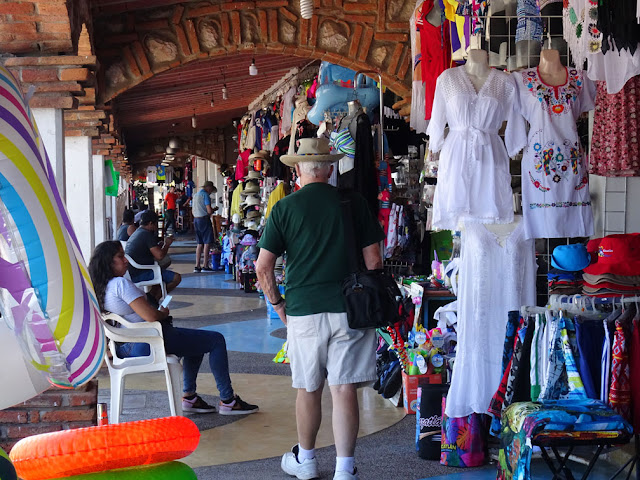 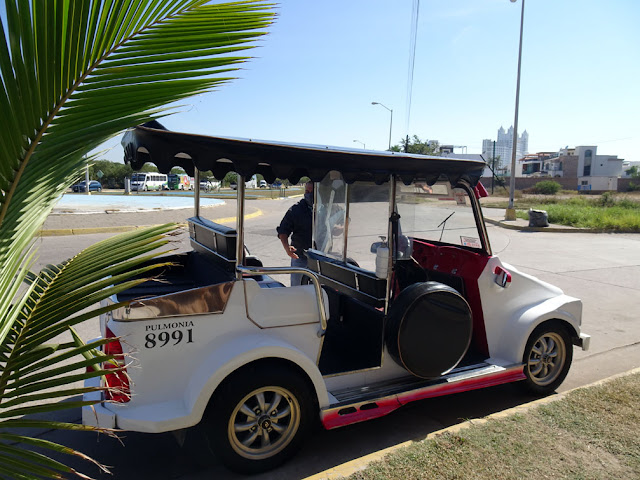 He was enclosed with plexiglass behind and next to his seat. Both drivers had sanitizer and were wearing masks. 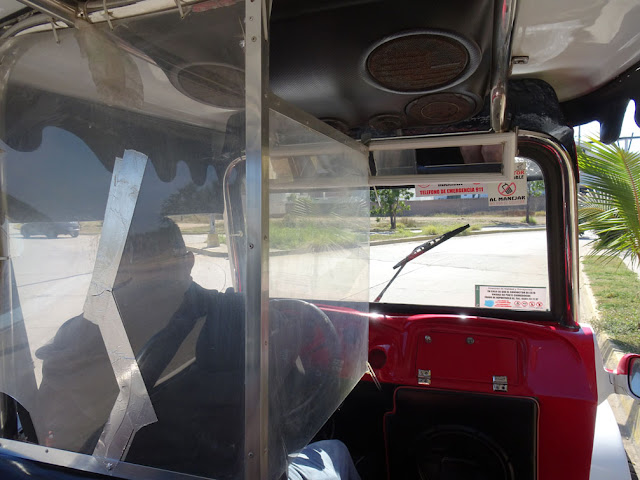 Fresh fruit any one? 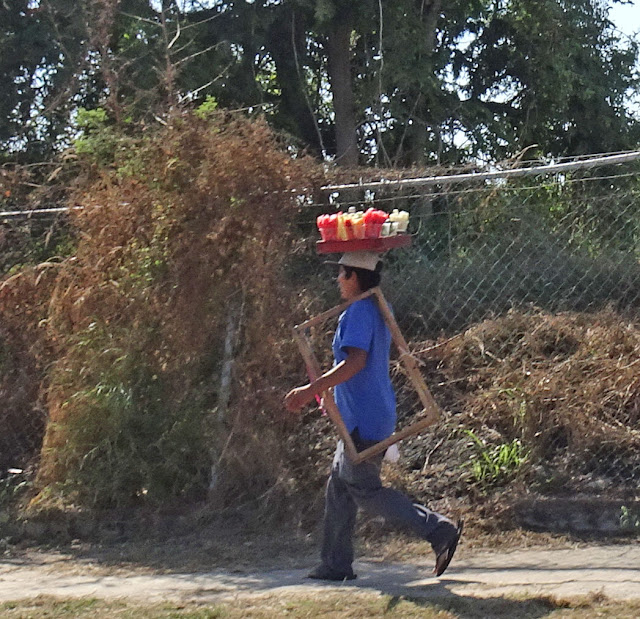 Spent rest of day at home. Working on videos, blogs and reading and hoping the GBs would last. I also fixed dinner. Gnocchi, Bill's home made sauce and Beyond Meat meat balls. Don't think I'd buy them again. Sorry it just isn't meat!
Got the car back about 5:00.
Posted by Carol and Bill at 2:35 PM