I think it was Tuesday night we went across the street to have dinner again. Kind of a strange sunset. really dark heavy clouds to the north, but a break in the clouds to the south. A couple of guys out fishing. 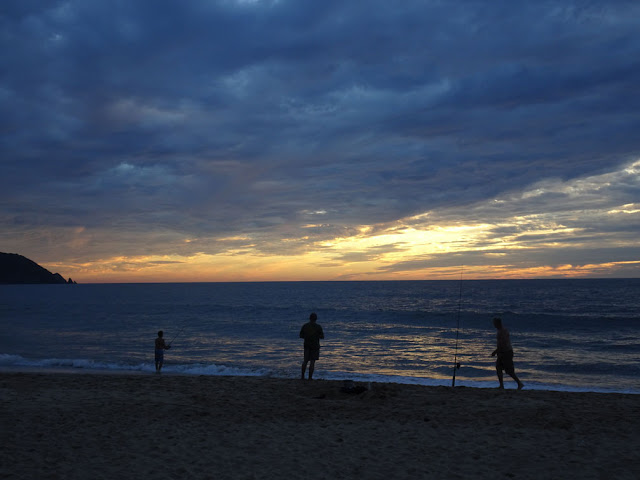 A little more color as it went on. The breaking waves really show up. 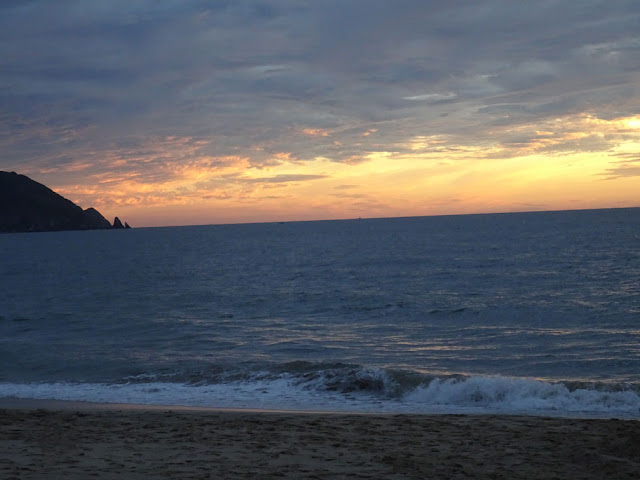 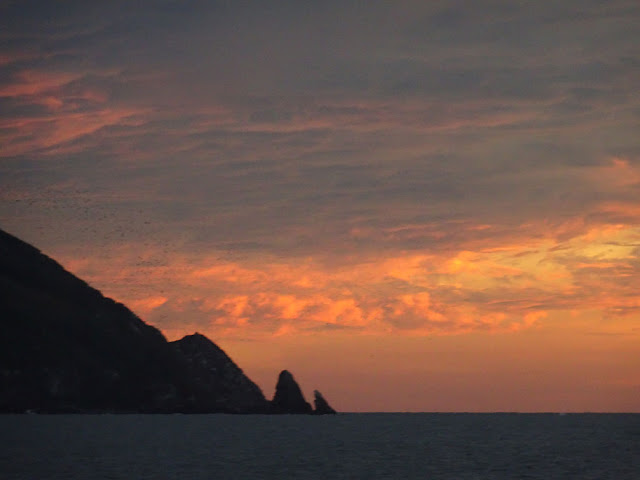 Can hardly believe it is December already...where did the year go. We left Mexico in February - Got home to Vegas beginning of March and then spent just about all of the summer doing nothing but going out for groceries. Long, long summer. So we left home early this year, in October. At least here we get out and about.
They are building custom homes on the south side of the RV park. Looks like a big one. Probably only one story high. But the workers tend to walk on the Parks wall off and on. We can hear them talking and laughing. 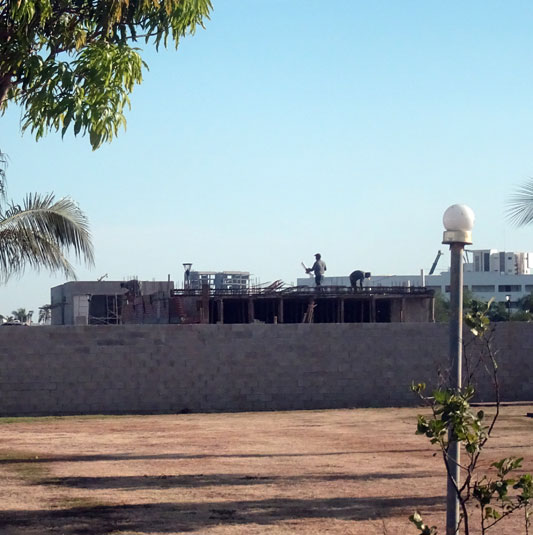 Stayed home all day yesterday so out and about this morning. Looks like an under ground parking garage at the new building where Dairy Queen used to be. 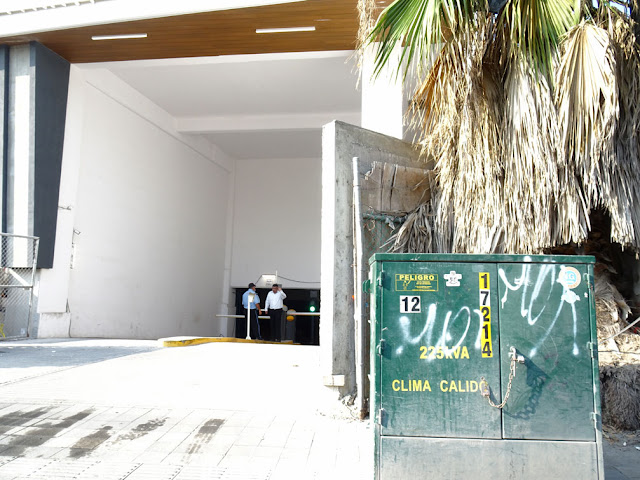 And they are already landscaping it. Must be pretty close to being done. Only four years. 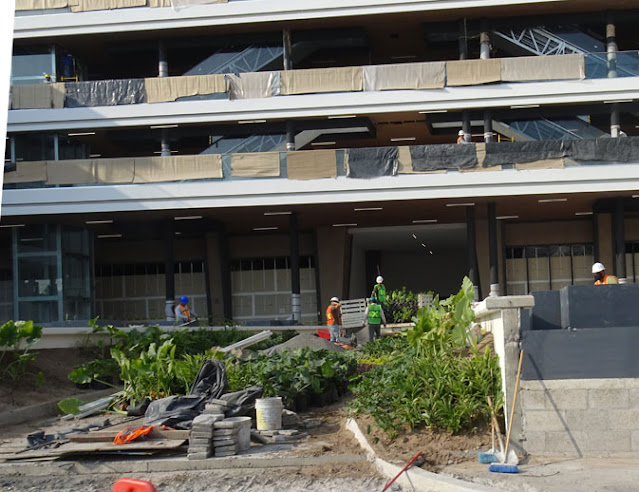 We are creatures of habit - especially about breakfast. To La Antigua again. I had something different this time. Waffle with cream cheese and caramel topped with cooked apple slices and cinnamon. I was surprised the apples were cold - on purpose - refrigerator cold. Also scraped some of the cinnamon off. It was good but think I'll stick to crepes. I had the third one down, Barcelona - check out the one below it. Bailey's ... And further down Dublin...ice cream... 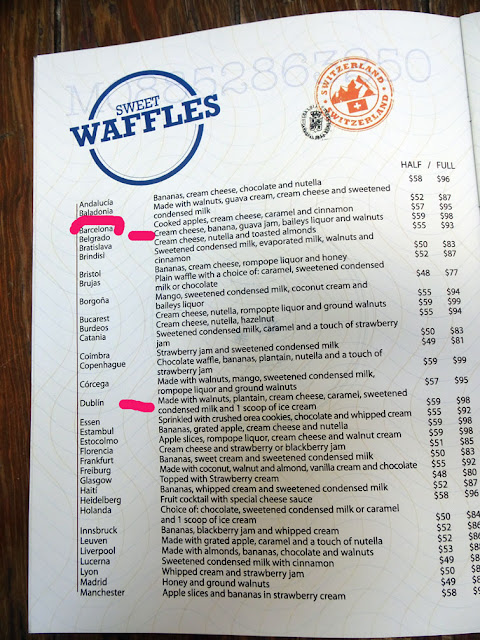 My half waffle. Glad I got a half order instead of whole one. 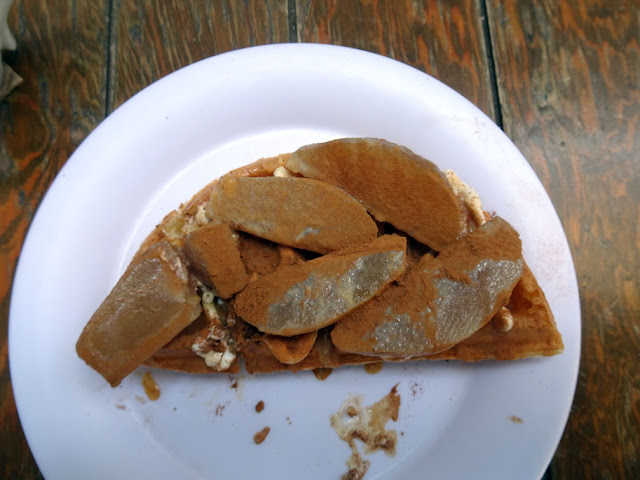 Done eating. Like the trim on this house. Something different. 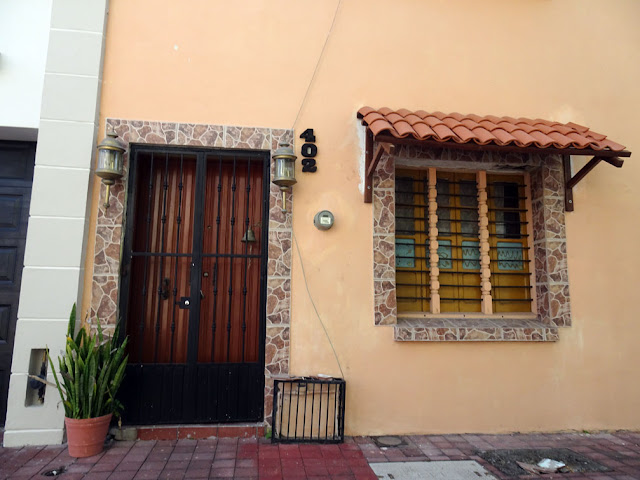 The house we've been watching being restored...Oh my goodness - they are starting to paint it...Never thought they would paint it this color. 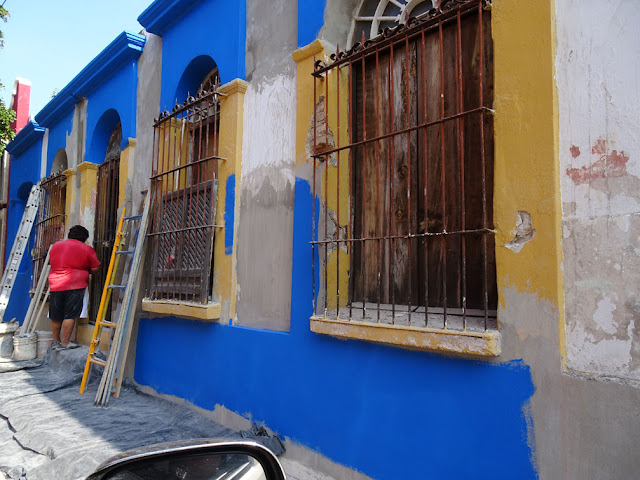 I wonder what color the trim will be. 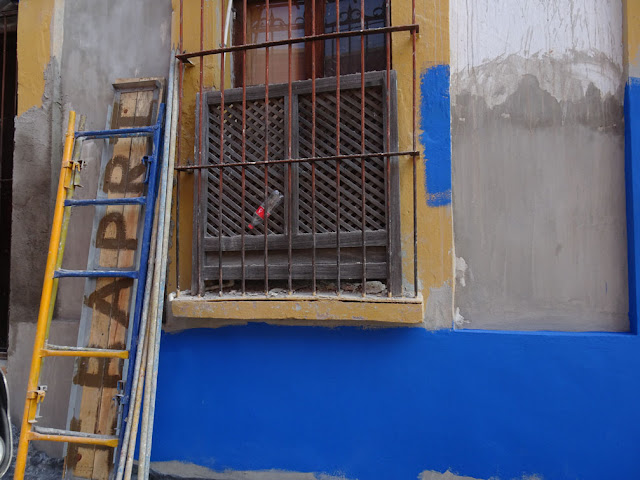 Notice how high the house is set above the sidewalk. And the curbs are high too. There has been lots of street flooding in this area in the past. 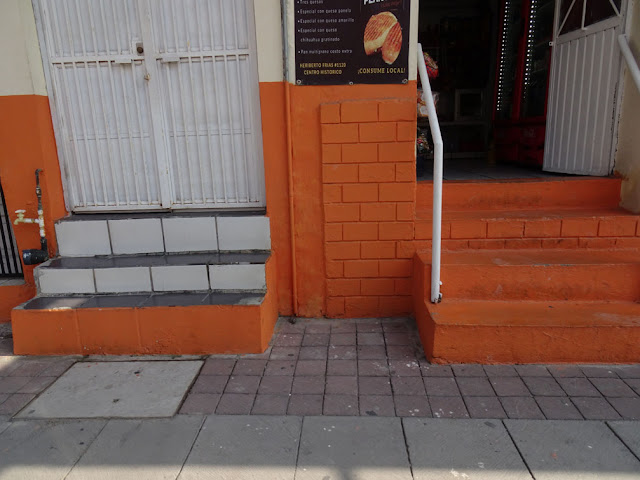 This place is getting two more stories added on. Will have to keep watching it for progress. 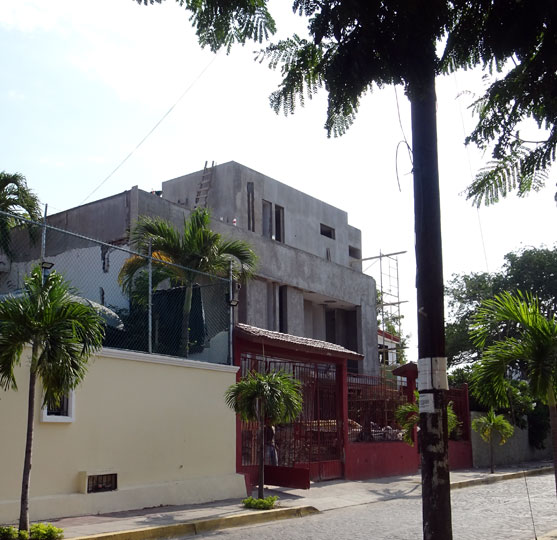 Not sure I'd want to be climbing that ladder. When the first guy got up the one holding the ladder went up too. No idea why as we were driving on by. 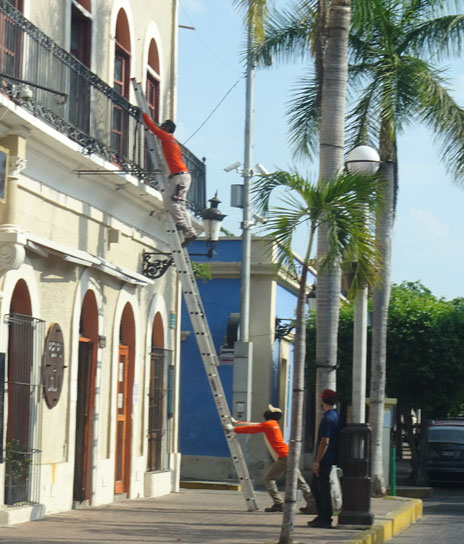 This apartment building could use some TLC. 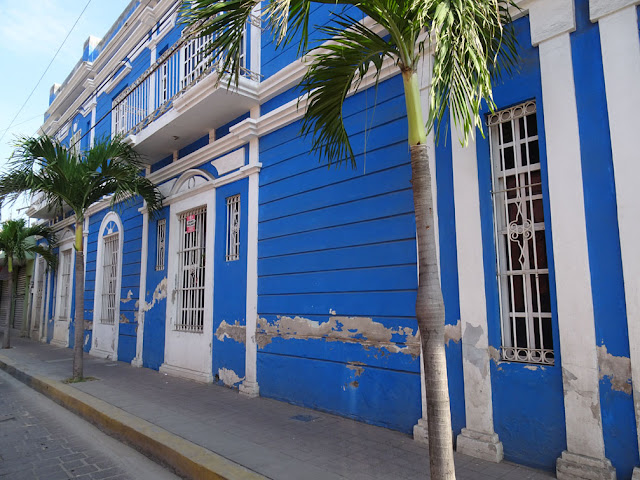 Good news about Bill's watches. He picked up most of them today and the old hard to fix one will be ready in a week. It is his favorite!! watch so he'll be glad to get it back working. 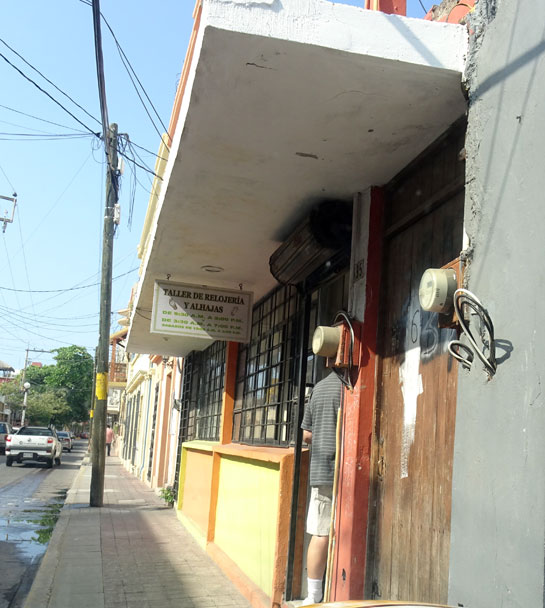 Glad to see this building is being worked on. It is one of my favorite buildings. Just hope they pick different colors. 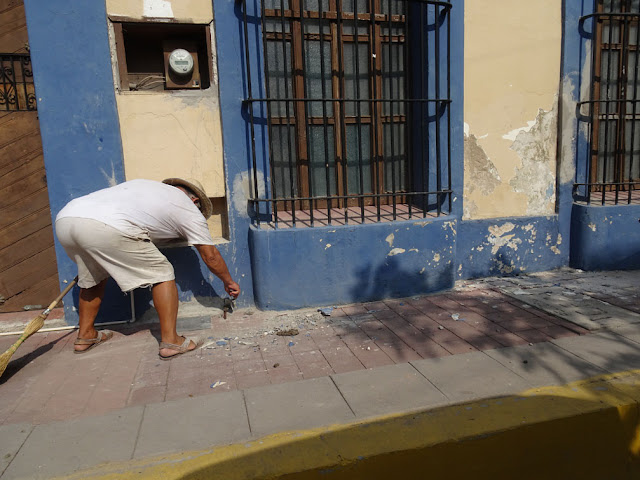 This is that building too. Some work going on around the big door. 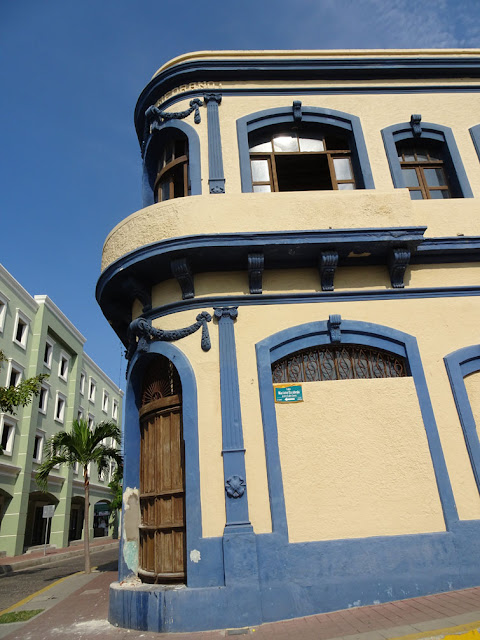 Even more work being done. Looks like all these will be repainted. 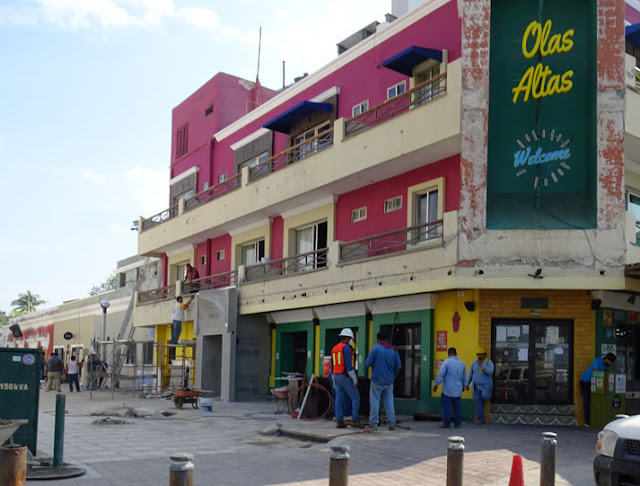 One of the divers waiting for tourists. 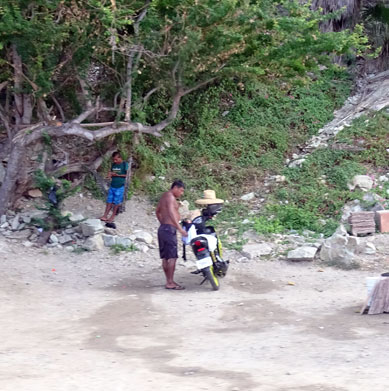 This has been repainted. Looks really good. I wonder if the fountains are on at night. If so they used to be lighted with different colors. 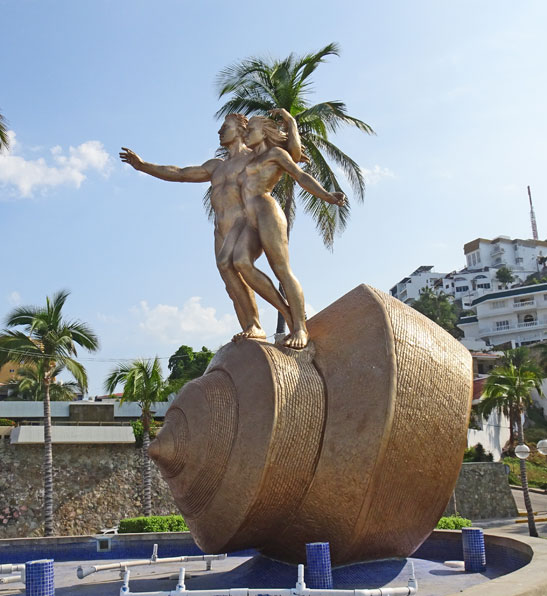 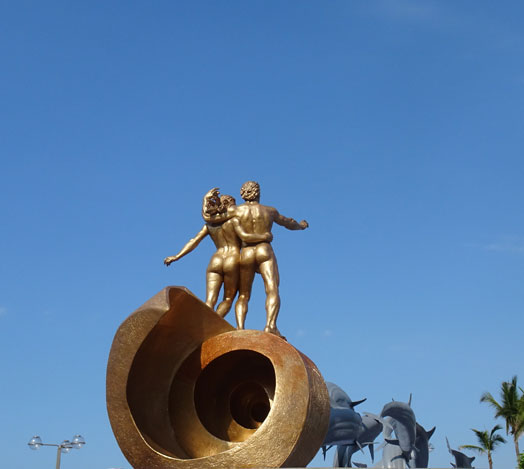 It is hard to get a really good picture of this. Seems like the sun is always in the wrong place. 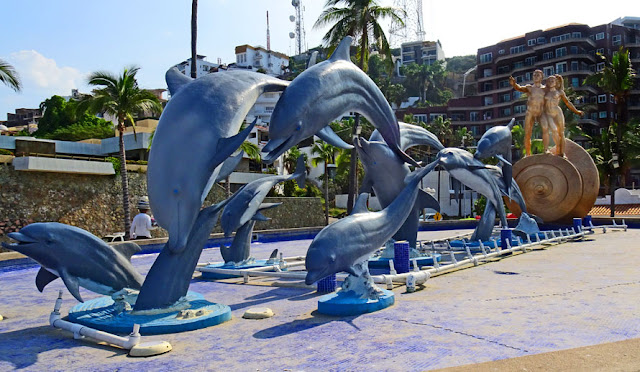 Will stop here for today. Stopped and dropped off our laundry before coming home. Also talked to mechanic who is going to put an alarm on the RV Saturday. Nothing like locking the barn after the horse has been stolen. No other plans for doing anything. But who knows...
Posted by Carol and Bill at 2:40 PM

Like the new header photo - was a fairly clear day when you took this. Some of those buildings are tall. Question - is there a limit to how many floors high rises can have?

Sandy - tried to find if there is a limit. Seems like I remember reading something about it a couple of years ago. But can't find anything now. Sky line sure is changing.