Friday Bill had an appointment with the dentist at 11:30. Of course, we couldn't just sit around in the RV until time to leave for appointment. So off we went about 9:00 - heading across town towards Centro. Really hazy out. It has been cloudy and cool for about four days now. In fact this morning we got a few drops of rain. Very dark and cloudy out today. Sweeping the bike path. 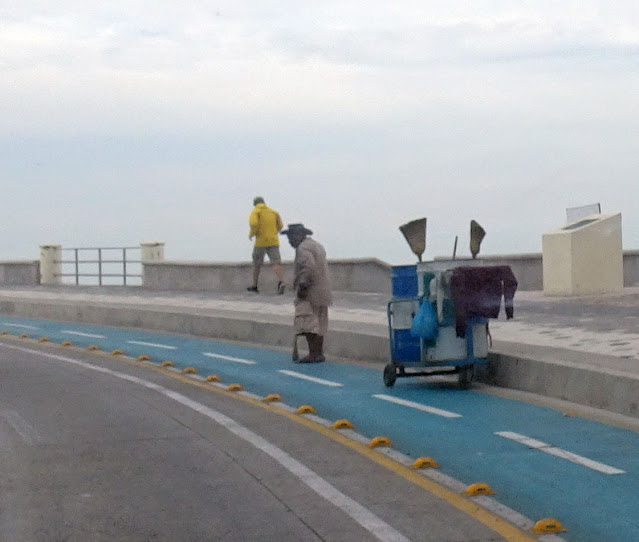 Our destination in Centro was La Antigua for breakfast. Addicted to those crepes. Driving by the Plazuela Machado. This is the restaurant we ate in a few days ago. She is mopping the tiles out front. 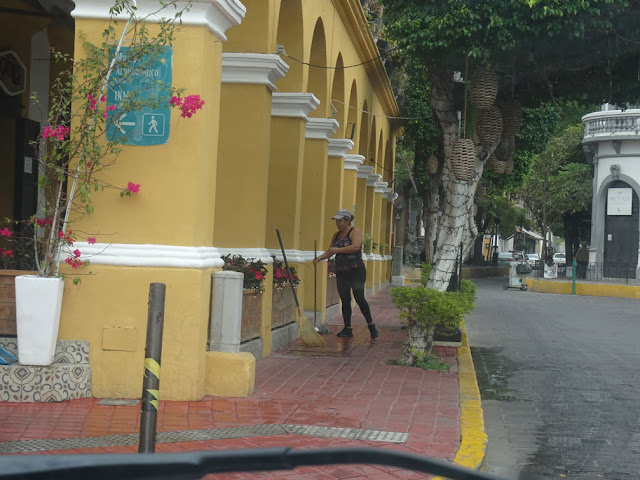 Just driving around deciding what to do. 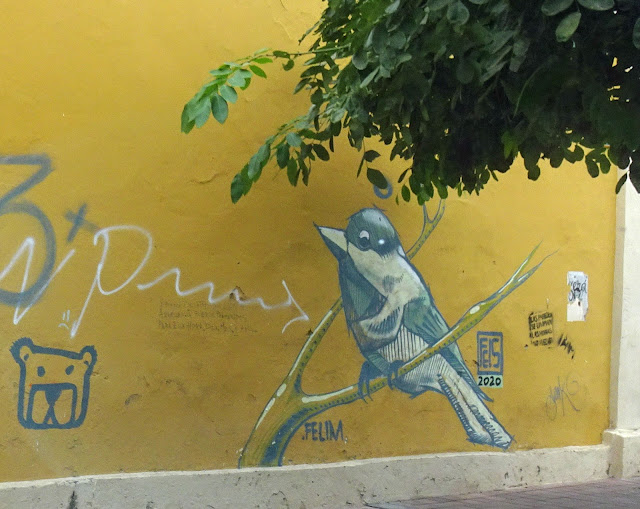 We ended up out at the look out point by the lighthouse and observatory. Last winter we watched them build this little chapel and landscape this whole area below the observatory. 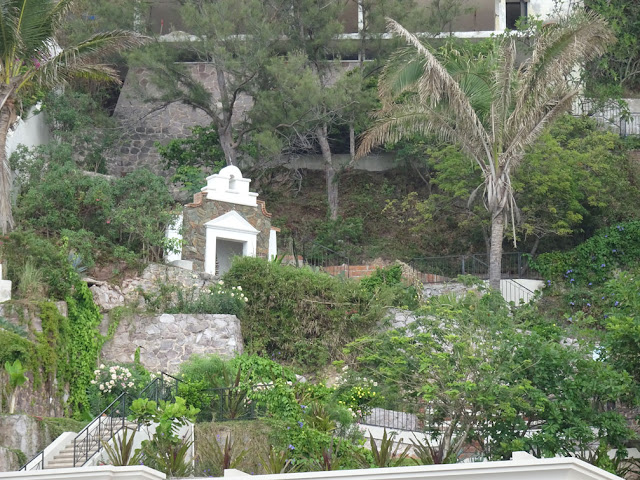 Looking out across the harbor. That is a restaurant on the left - great views. Not so great reviews, but hope to go there someday just because. Never any parking around it. Would probably have to park in Centro and take a pulmonia there. There are steps from the road up to it. Can just see them in lower right had corner of picture. No Way! 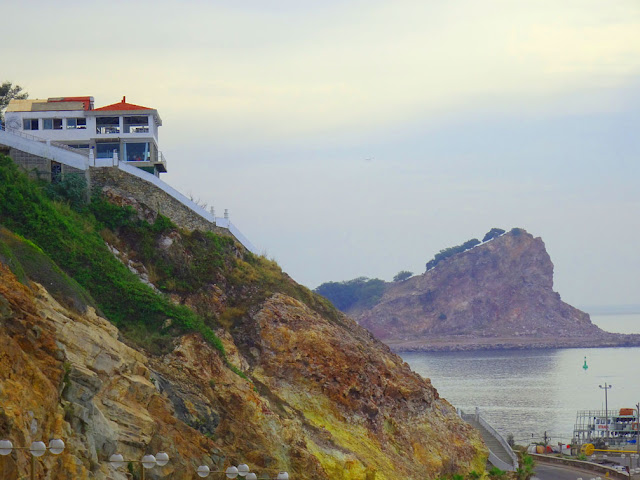 Out beyond the breakwater a couple of fishing boats with their nets out. Very hazy and dreary day. 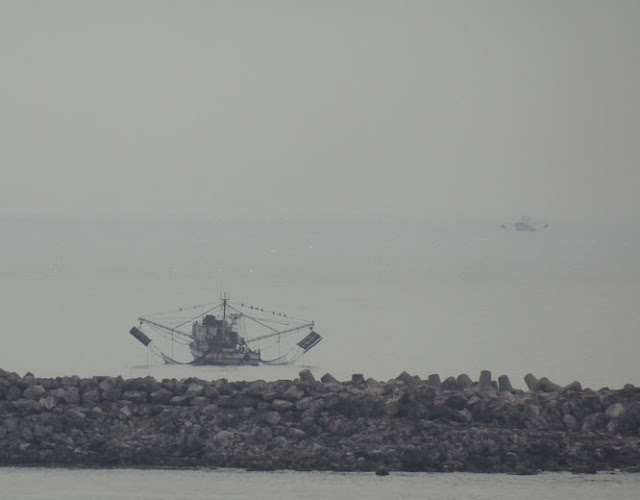 A couple of people going up the funicular. I think I have Bill talked into going up to the observatory one of these days. There is more to do up there then he thought there was. An agave garden, an aviary, lots of pictures of when it was built and a short film. So should be fun. Only problem might be parking. The isn't any! Expensive for here though - 450 pesos per adult. 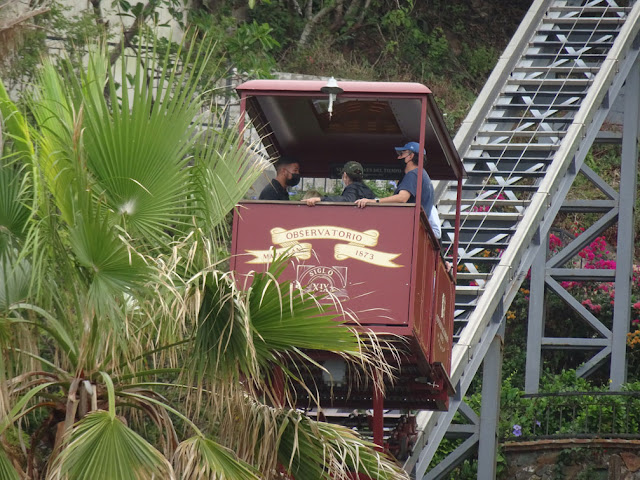 Still wasting (took me five tries to get that word right!) time we drove down by the harbor and took the road up along it. 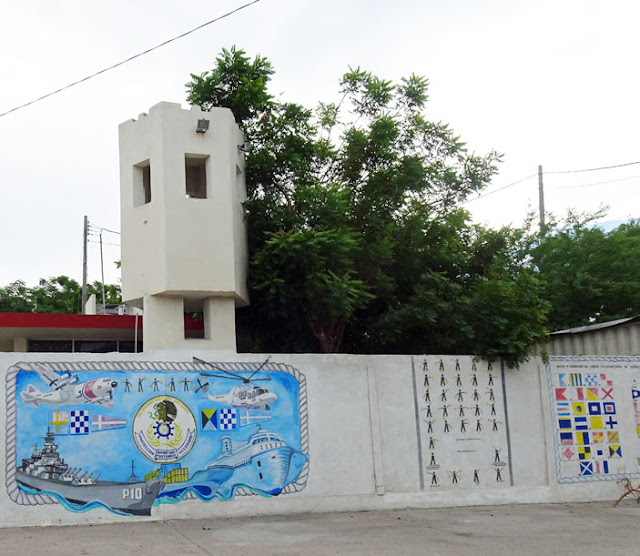 Went into the area where there are a couple of restaurants and this statue of the Virgin. For all the sailors and fishermen. 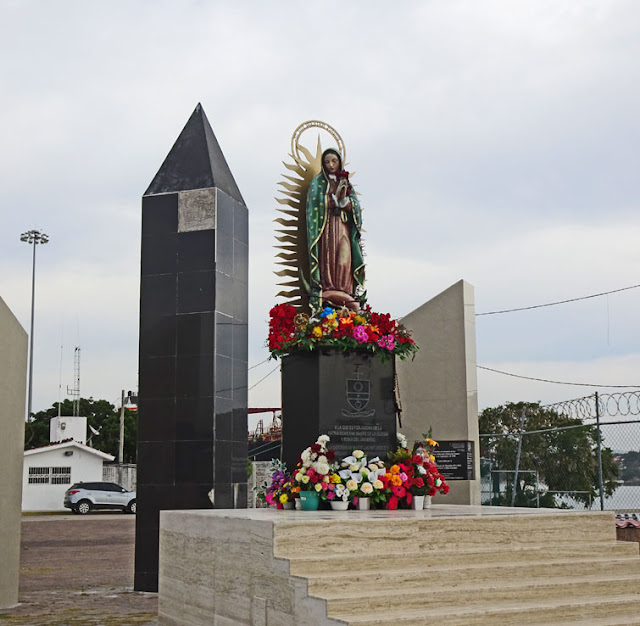 There was this one colorful rooster and a whole group of hens running around. All the hens were pure black, I don't ever remember seeing pure black chickens before. 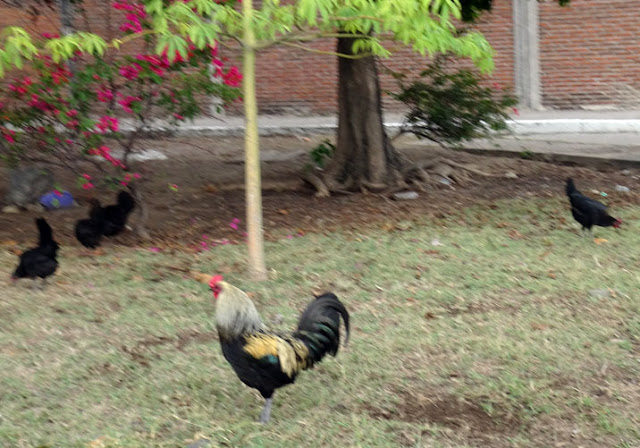 You never know what you might see driving along the road. 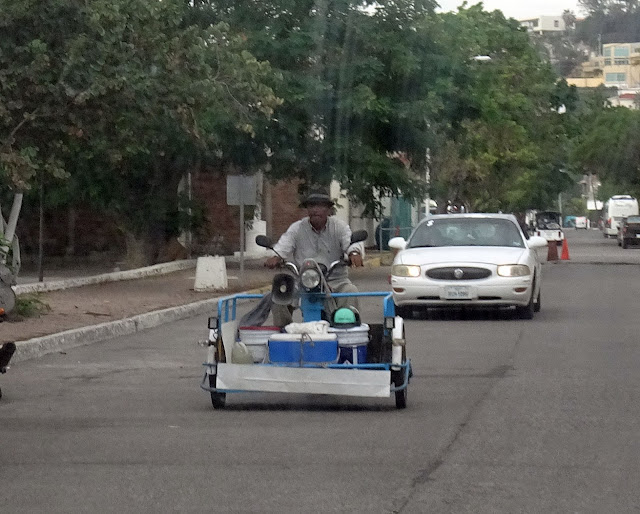 We finally turned and headed back towards Centro at the brewery. Haven't been in this part of town for a long time. Too bad this hasn't been kept up. Looks interesting. 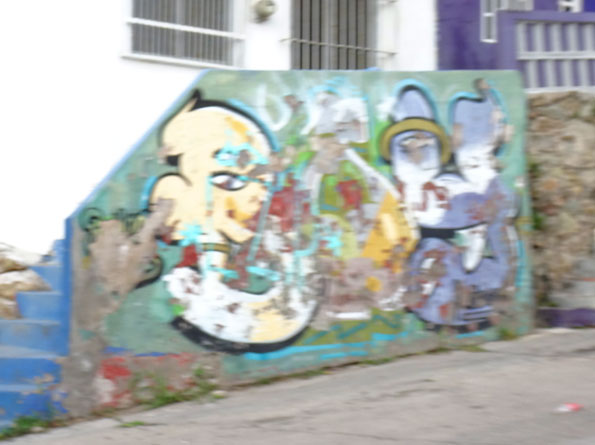 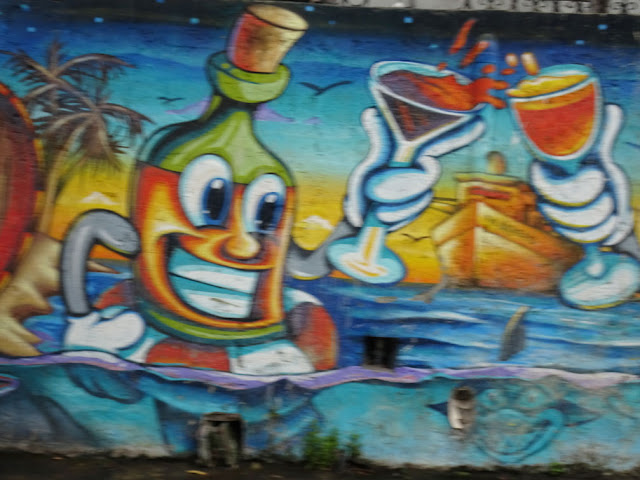 Almost in Centro. We can see the church towers. 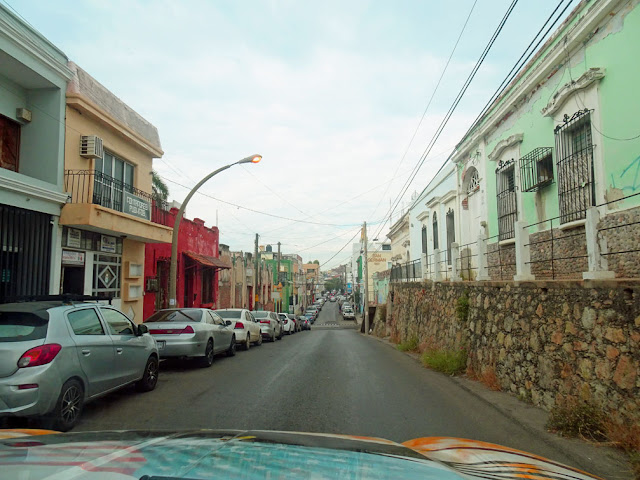 Oh My! The house that was falling apart for so many years and was just recently restored is part of the Art Walk now. Mark you know we will be going to Art Walk either January 7th or February 4th just to get in this house. 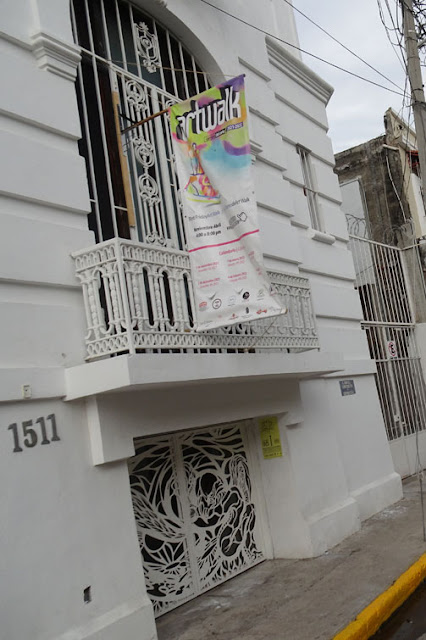 Heading back towards the Malecon. I've been trying and trying to get a picture of this mural in a restaurant, but they have never turned out at all. Maybe because the day was not sunny it worked this time. Not really good, but can see most of it. 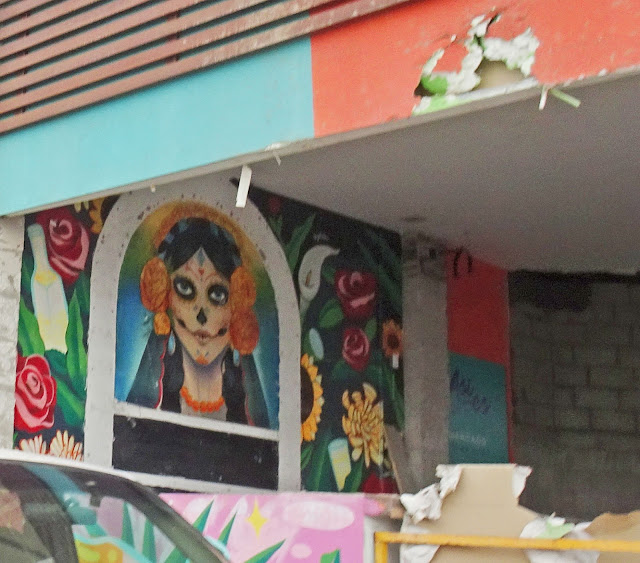 Even though it was cloudy and cool the water park was up and running. No one in it though. 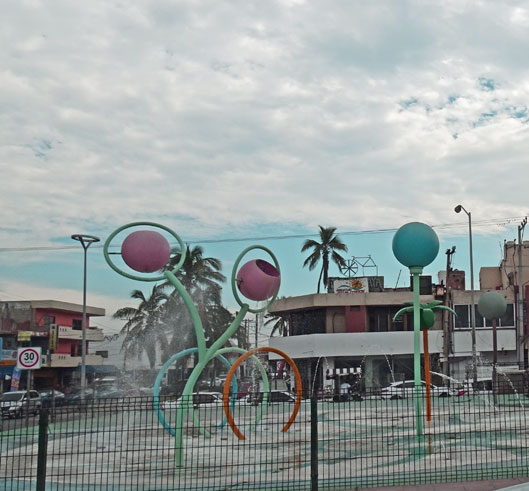 And finally here we are at the dentist. Better him than me. Very nice lady dentist. 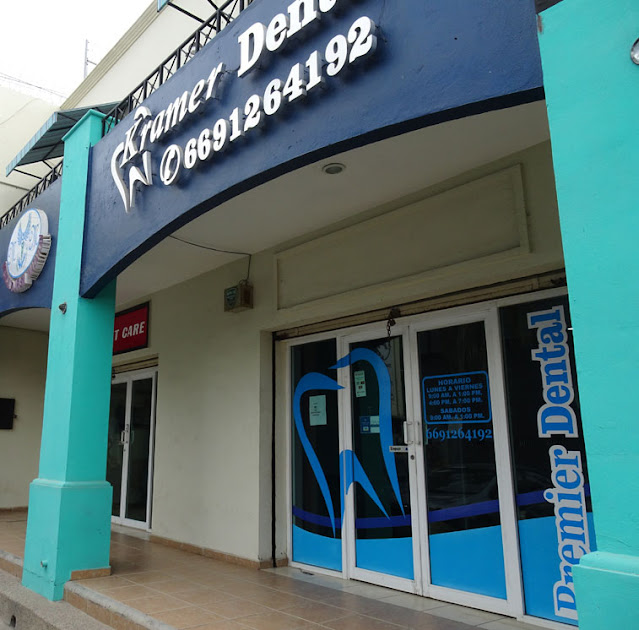 Heading towards home. Not sure why I took this picture, maybe for the small colorful stores in the middle. Both buildings on the sides are fairly new. 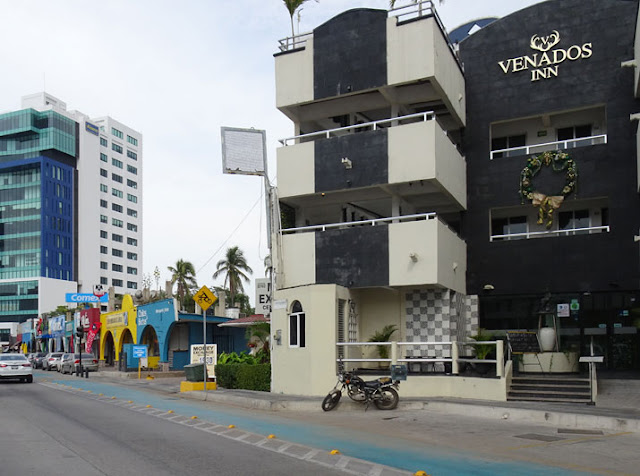 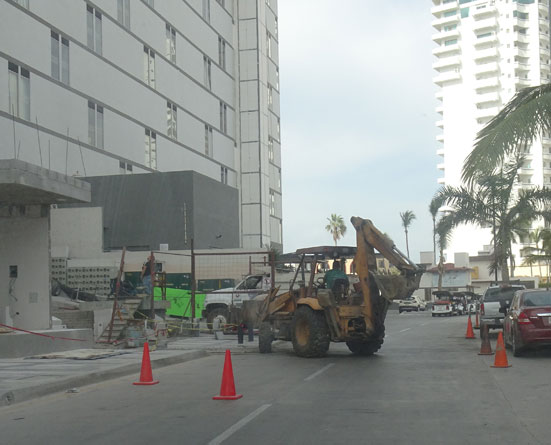 This building is a "Social Club" no idea what goes on in there. Looked it up it is a night club. 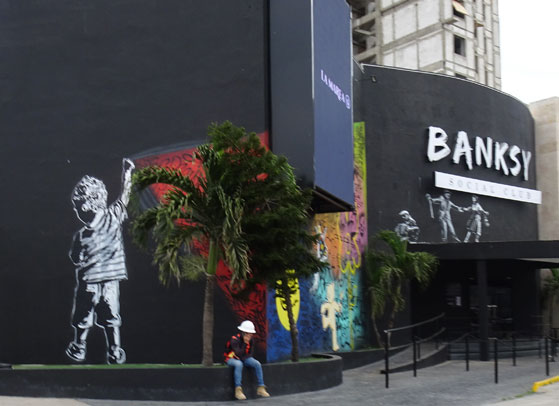 And then we were home.
Saturday was weird. We had plans to go out in the morning but Bill wasn't feeling really good - he is still taking the antibiotics and they upset his system. So we cancelled the plans. Good thing too; as it turned out I wasn't up to my usual energy. In fact I took four naps during the day - slept most of the day away. Felt okay just tired. Sunday we were both fine but too ugly out to go anywhere.  Rained a little a couple of times during the day. Just enough to dirty windshield of Jeep that Bill had just cleaned. Sun came out in the afternoon and we did end up going to grocery store later in day, but that was it.
Now I am out of photos and things to say...
Posted by Carol and Bill at 11:28 AM

Looks like we are gonna see inside that building this year. Art walk, look at me getting all this culture.