In search of new restaurants in Centro

We are getting tired of eating in the same old convenient places so yesterday we went in search of some new places to eat. Had three we were going to check out, I'd read about them on line or we had driven past them,

This is the building in the Golden Zone. They are sure getting a lot done quickly. One of the corner places looks like it will be a coffee shop or something as there are already tables and chairs in it. Maybe it will be the Dairy Queen. Long time ago I read they promised them a place when the building was done. 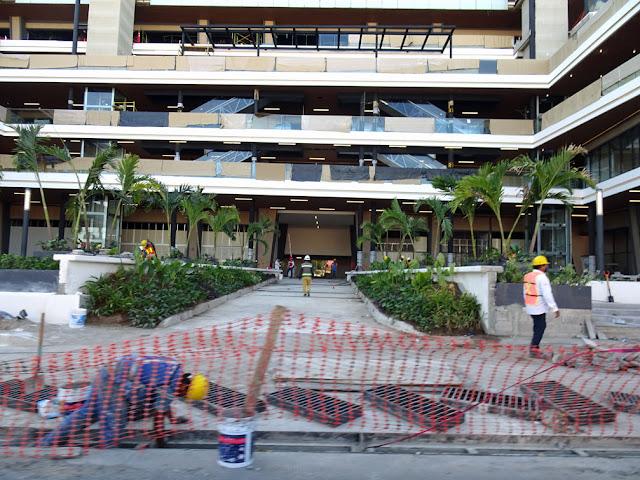 Have instruments, will travel. 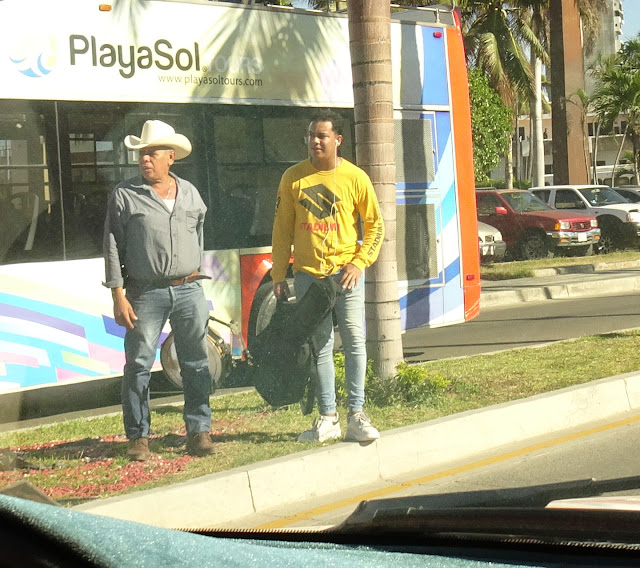 Another Christmas decoration on the Malecon. This is by the pulmonia statue with the big rock that USED to have a replica of the light house on the very top of it. NO lighthouse any more. Why? Hurricane, vandal? 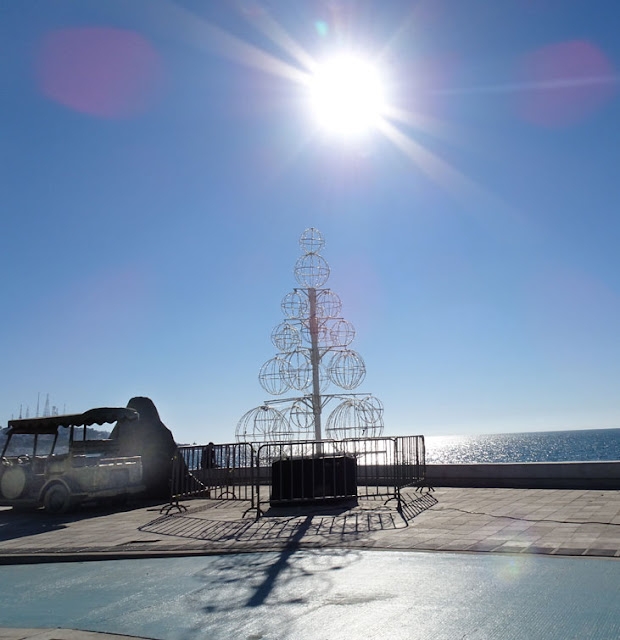 Another decoration down in the area where the divers are. 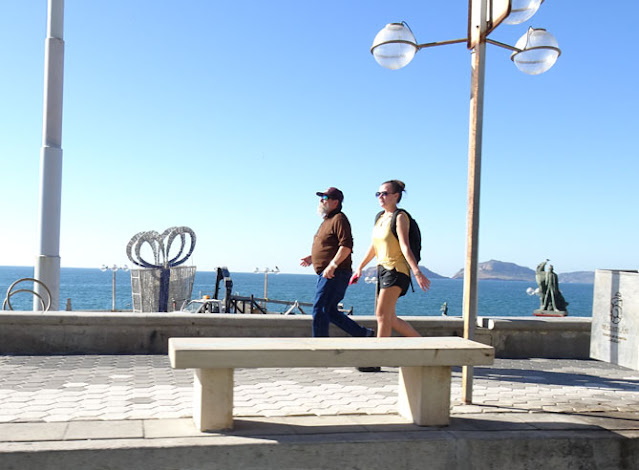 We also parked in a different, to us, parking lot. 30 pesos an hour about US$1.50. The parking lot is in this building. Well in where the building used to be. All that is left of the building are these walls. 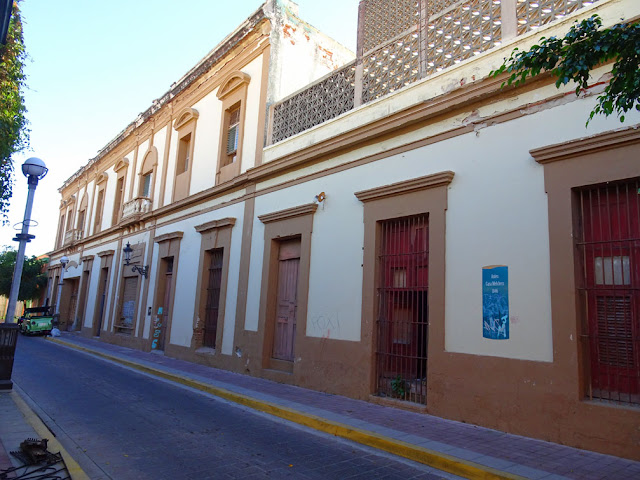 The name of the building and when it was built. Must have been beautiful at that time. According to the parking lot owner at one time there was a tunnel under it that led to the ocean. And pirates stored their loot in the tunnel...(why do people like to vandalize things?) 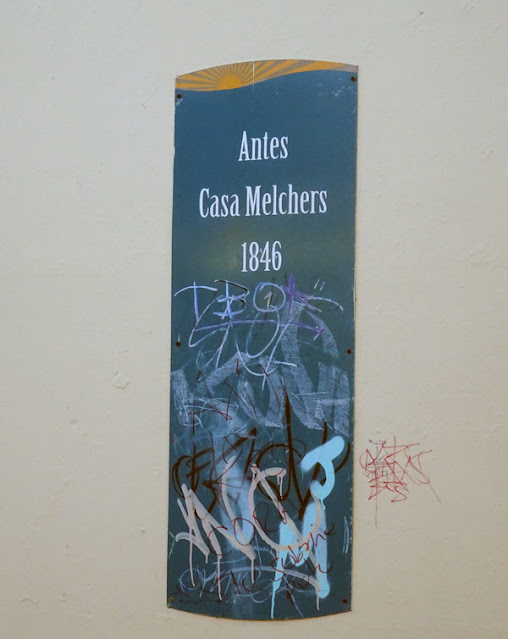 What is left of the interior walls of the building. 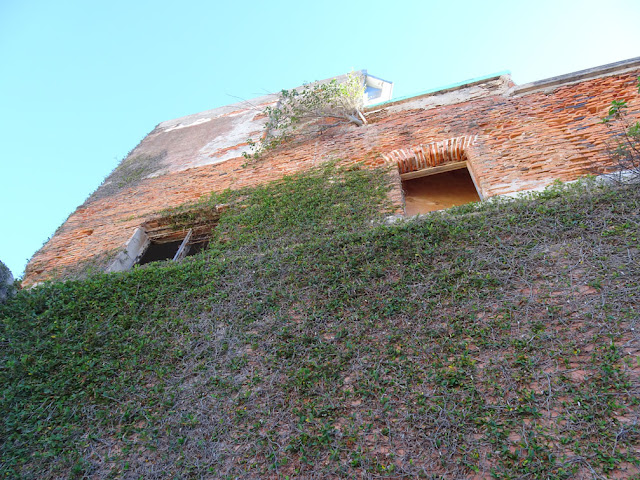 Bill checking out the hand made bricks of the walls. 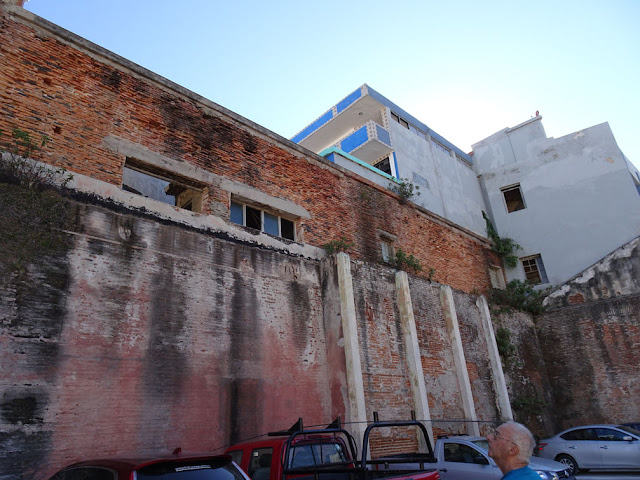 This was at one time one of the interior walls. Many coats of paint on it.  Behind it now is a big yard with a swimming pool and hot tub. That is well maintained and used. By whom? There is a gate to go into it with a bell to push to be let in. Need to find out more about it and take a picture of it. Just was surprised and forgot. 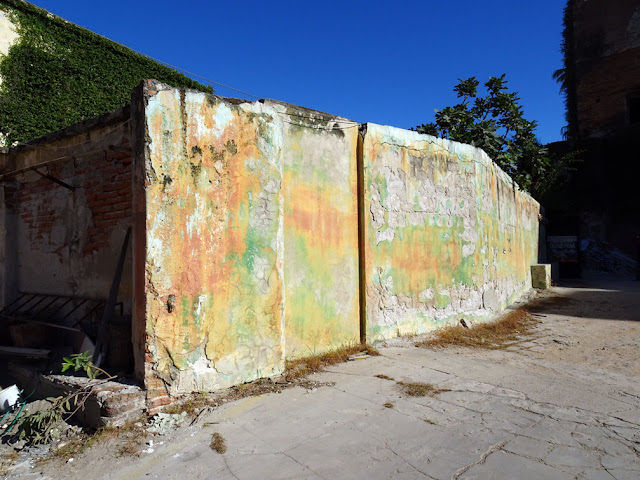 More of the interior in the parking lot. 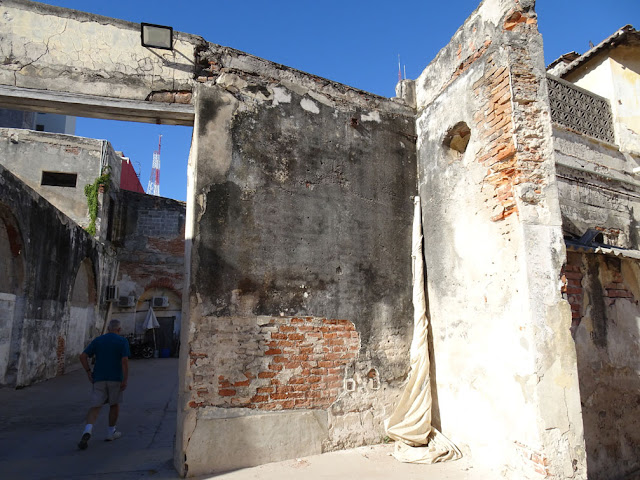 Must have been quite the place. What a shame buildings like this are allowed to just fall apart. Glad the exterior is kept up though. 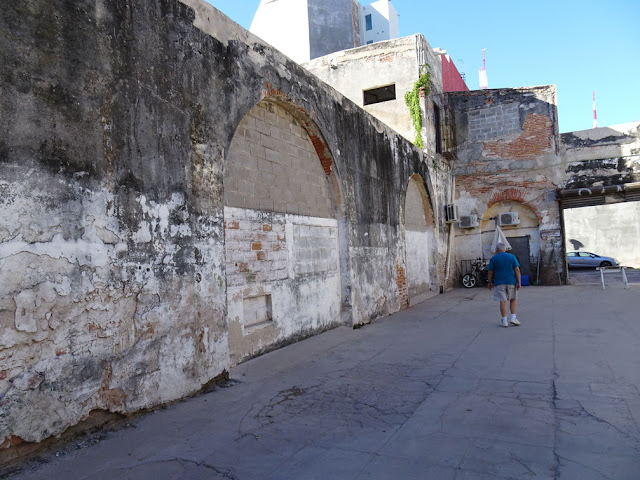 We parked there because it was right next to the first restaurant we wanted to check out.
The Casa Mayora.  Very pretty inside. They are open from 8 a.m. till about 11 p.m.  No one there when we got there about 2:30  Waiter was very friendly. Let us look around and shared the menu with us. The tables are slabs of tree trunk. Some of the 1846 brick is still showing on the walls. 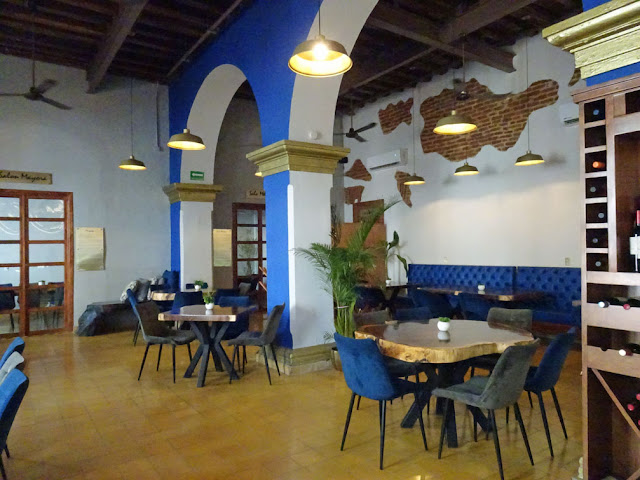 Just one page of the menu. Had to really look to find something Bill could/would eat. Way down at the bottom Chicken Skewer. Sounds good. 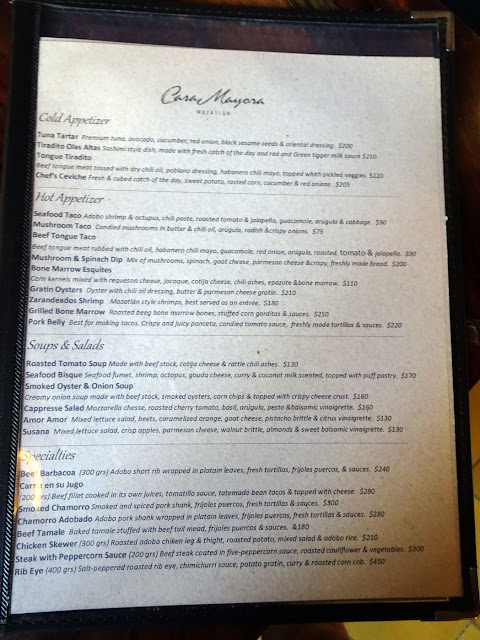 A second room with a huge one piece table. It was kind of dark in there and I didn't have my glasses on so didn't noticed the pictures were a little fuzzy. 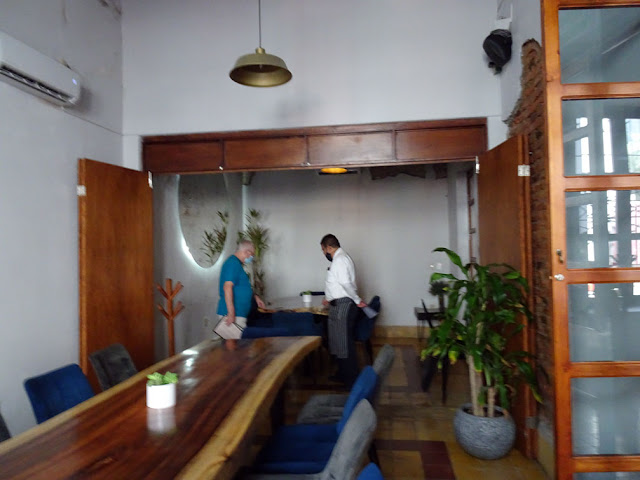 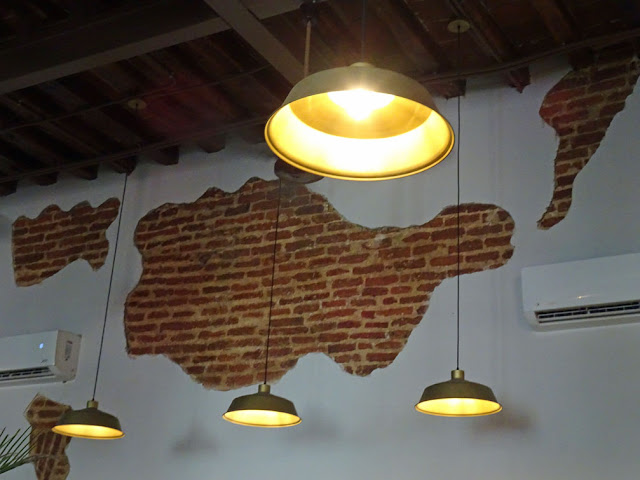 We thanked the waiter and told him we would be back to eat one of these days. For sure will. Maybe try it for breakfast.
This is a couple of the older buildings in the same area. They are so elegant. The one on the left is in use by the banking industry and government. 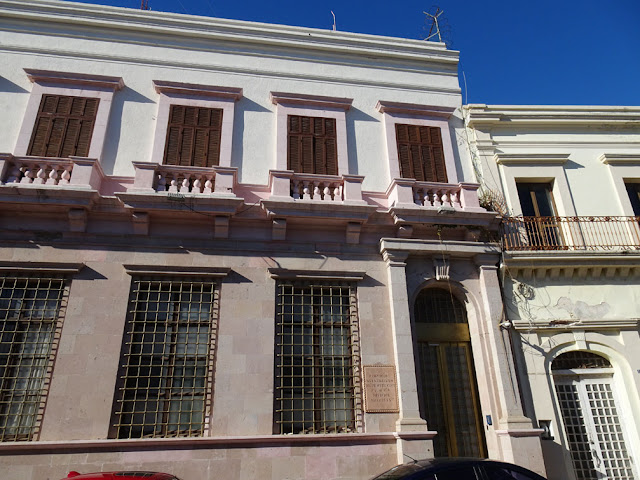 From there we walk about a half a block towards the Plazuela Machado . We were headed here. They had just opened, actually we were there before opening time which is 3 p.m. The name is La Molcajeteria. 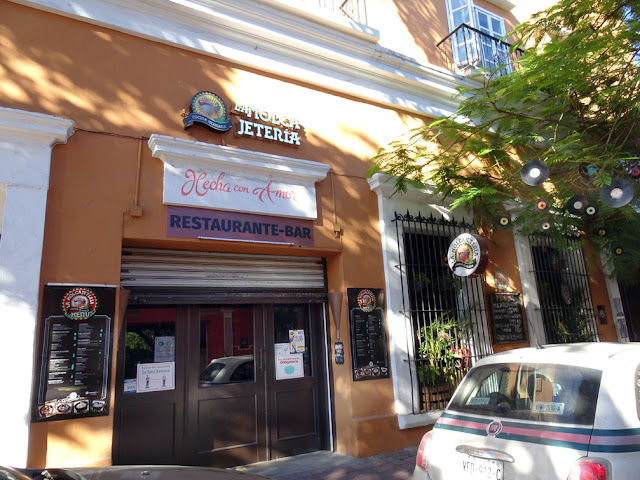 They specialize in Molcajetes  Another off picture, it was outside with the sun reflecting off it. But gives an idea. 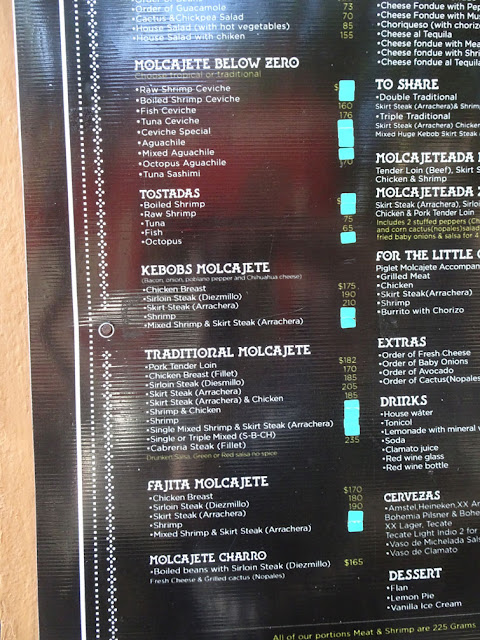 Inside. We were let in by the owner. He was a very nice guy. Showed us all around. His wife cooks. Small but interesting place. Will for sure go back for late lunch or early dinner one of these days. Lots of interesting things to look at. 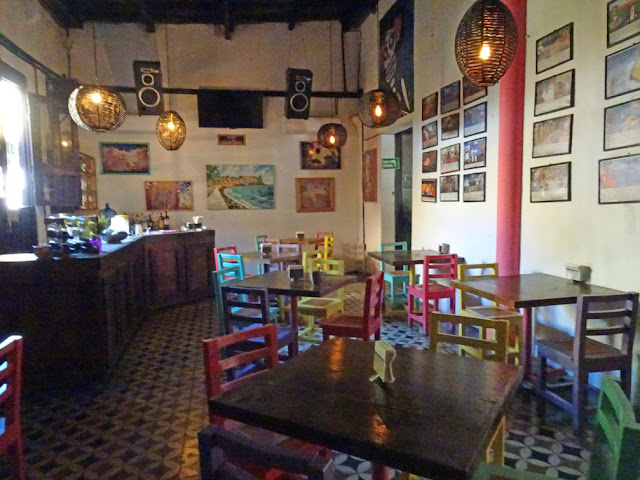 Very interesting décor. They have another restaurant in Culiacan. 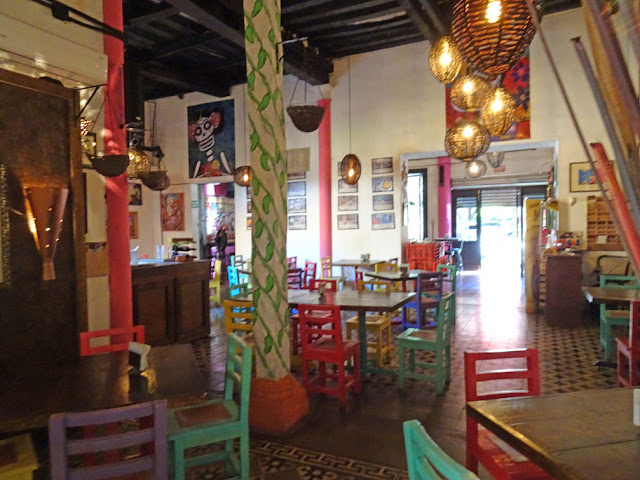 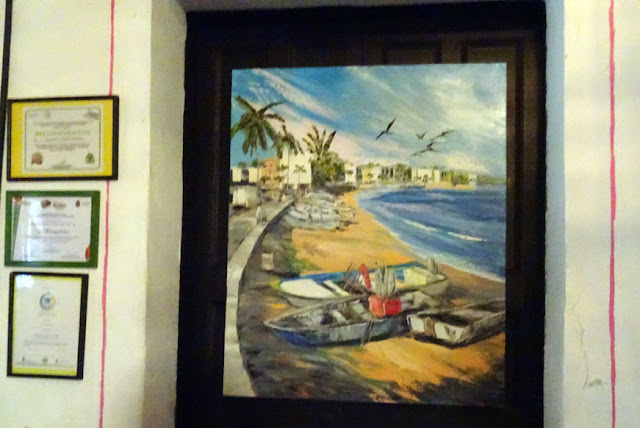 Just to the left of this picture you can see a large case full of old vinyl records. Thousands it looks like. He has a record player with a sound system to play them on. Been collecting for years he said. 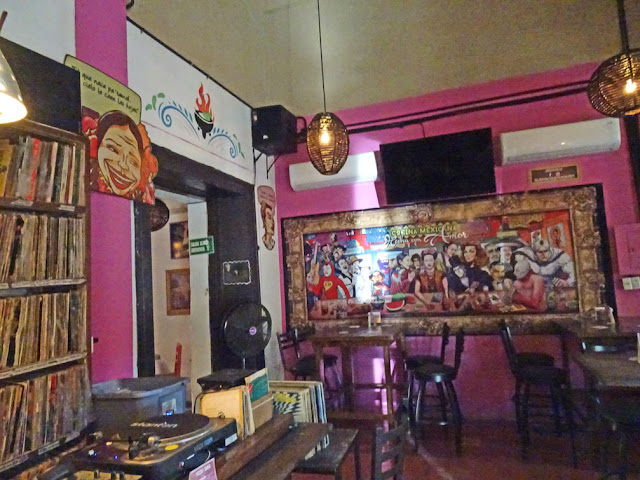 The tree out front has 48's hanging on it. Also has two outside tables. 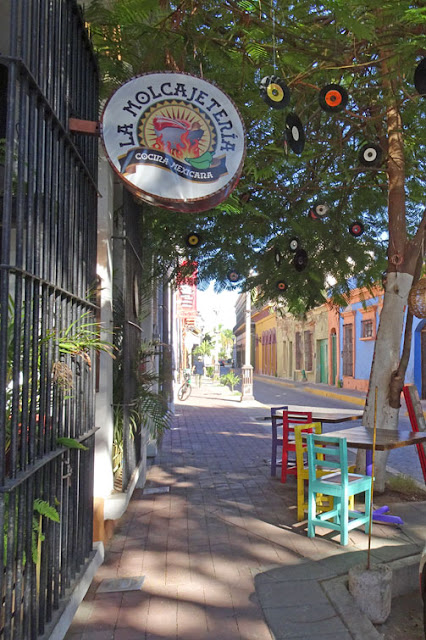 From there we walked around the block to check out another restaurant. Passing this building on the way. 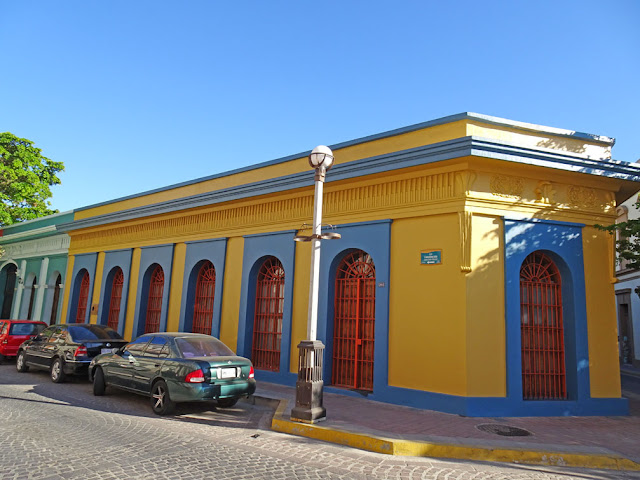 And this one. You see so much more when you are walking. And it was a great day for walking, about 83 with one of the lowest humidity's since we've been here. 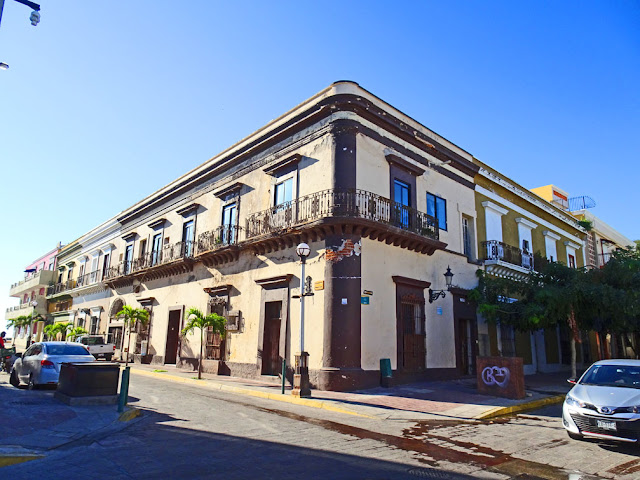 And I'm going to stop here cause we didn't go any where on Friday. So need to have something left to write about. Had alarm and AC in Jeep worked on. Alarm has been disconnected - still possessed! Jeep needs to go in shop next week for AC.
Posted by Carol and Bill at 1:12 PM

I just love all those old buildings. So sad they made a parking lot out of one. Gosh, I don't see anyone in the restaurants. Was it just the time of day? I know people there are on a different schedule than we are. It always makes me want to paint the inside of my house those fabulous colors.

Nancy - a whole lot of the parking lots are old building with just the walls standing. Long ago they lost their roofs. We were in the restaurant at an odd time of day. I know what you mean about the colors.