Getting ready for Carnaval 2017

After writing the blog yesterday morning. In record time I might add. We, of course, had to go across the street for breakfast. Very overcast and gray out. Not a good day for taking pictures.
After breakfast we left off a large load of laundry and then headed towards Centro. As we approached the Malecon we saw that the decoration for Carnaval is almost done. This years theme is Alebries and Dragones. The first time we saw the word alebries Bill had to ask someone what it meant. Basically it means whimsical animals. Animals with horns, antlers, wings, fins and some have them all. None alike but all very colorful. Here are some of the large figures that are on the Malecon. 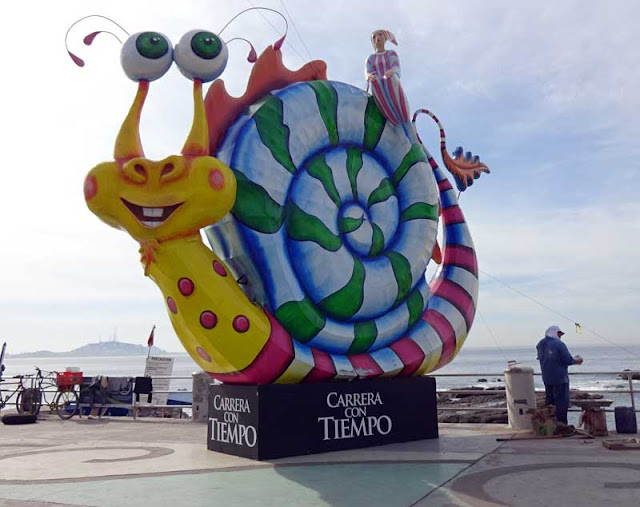 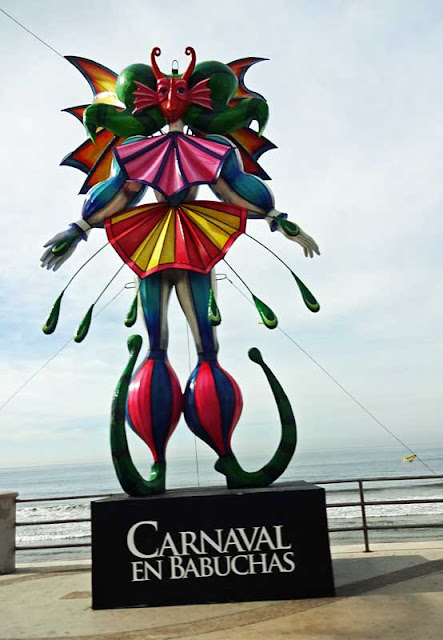 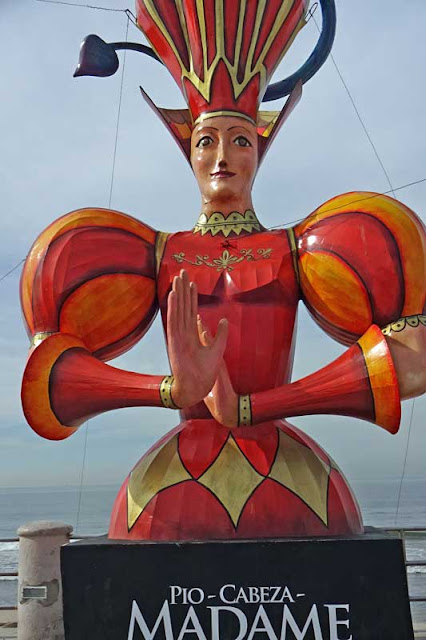 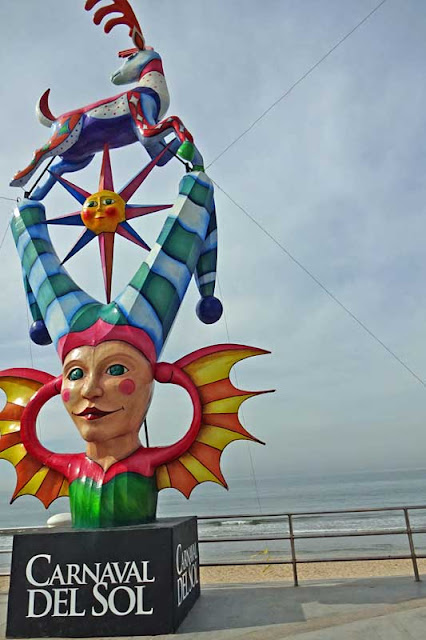 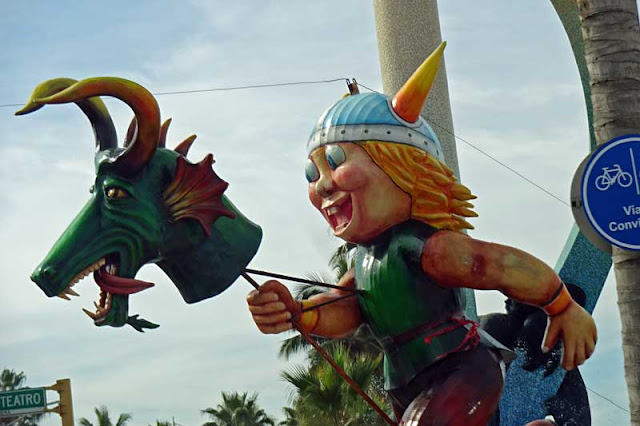 The light was bad so the colors don't show up as vivid as they really are. Also hard to take from a moving car.
As we neared the older part of town, the part that was here in 1978 and where the fishermen have their boats the road was suddenly blocked by machinery. And traffic going the other way was diverted to our side of the street. There is a palm tree on the flatbed truck on the other side of the road. 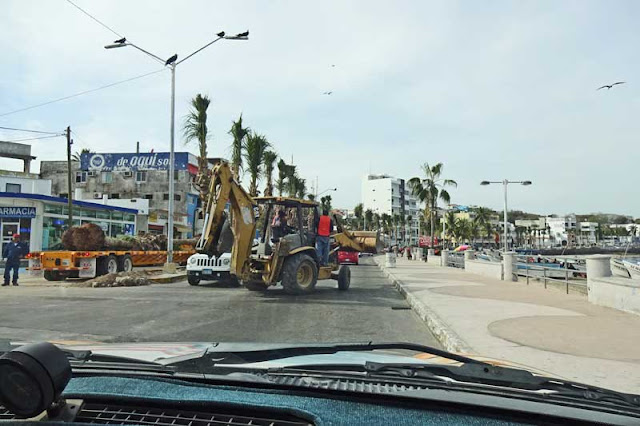 New palm trees are being planted in the center divider. I'll have to get another picture of the way they are being kept straight. All kinds of rope lines around them and to the light posts. 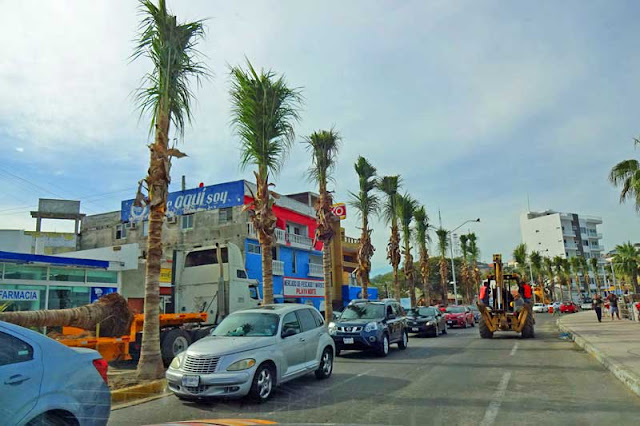 And then more figures. 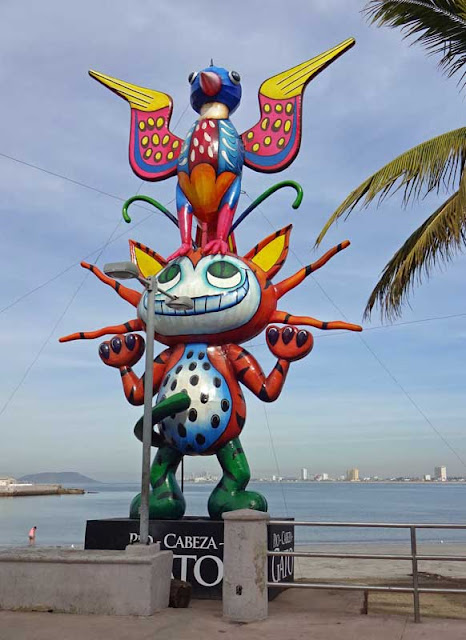 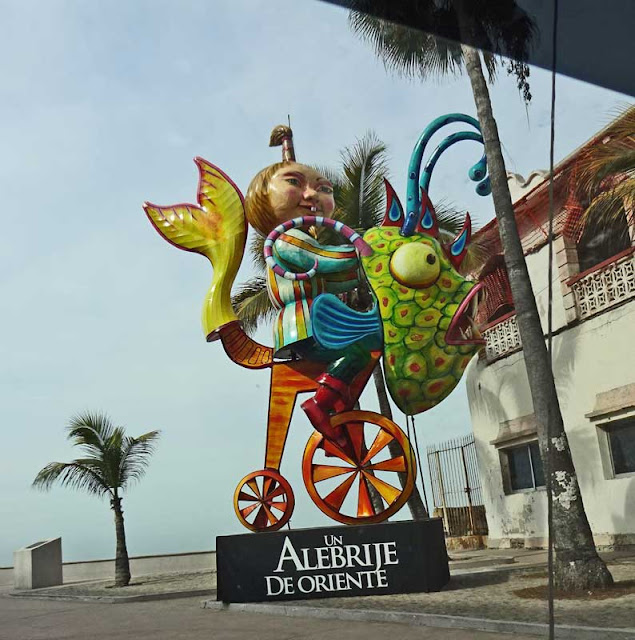 We eventually made it to our favorite parking lot in the Centro Historico. Left Willie to be cleaned and washed inside and out. Bill wanted to get all the salt and sand off of him. 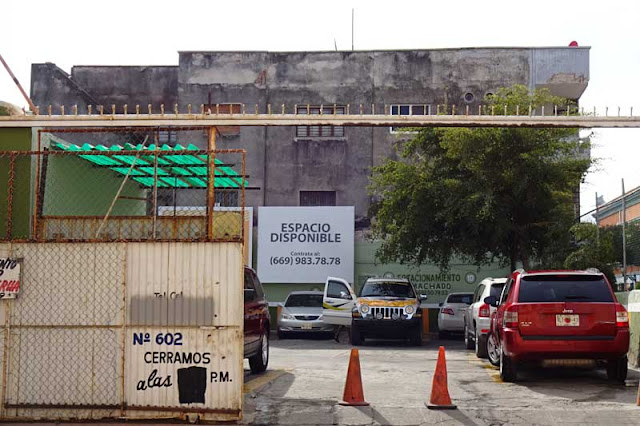 Because it was rather early we hurried over to the bakery to see if they still had any cinnamon rolls. They did. We got six of them. YUM!!! A couple to give away, the rest to keep. Smelled so good. Dropped them off in the car and continued down town. Took a different street than we usually take. Noticed the tree growing out of the roof of this building. It is hanging over the power lines. ZAP ZAP 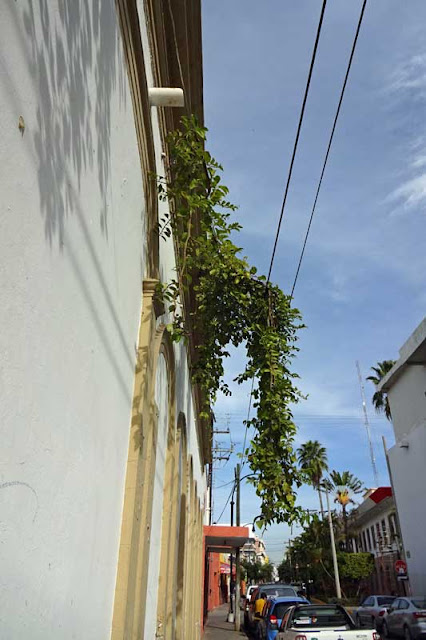 Made it to the main plaza where the government building is. A couple more statues and decorations there. 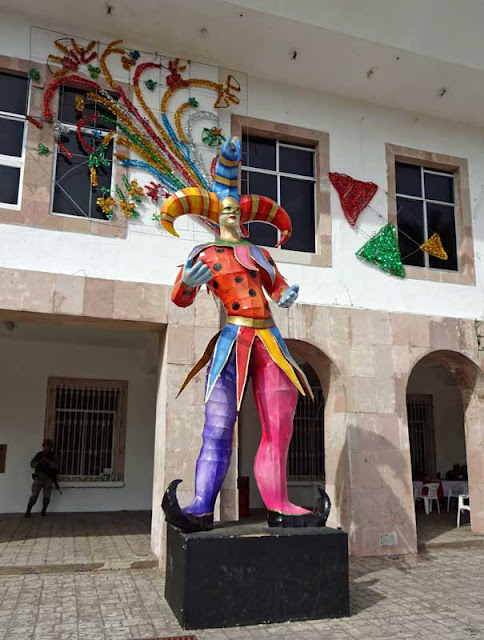 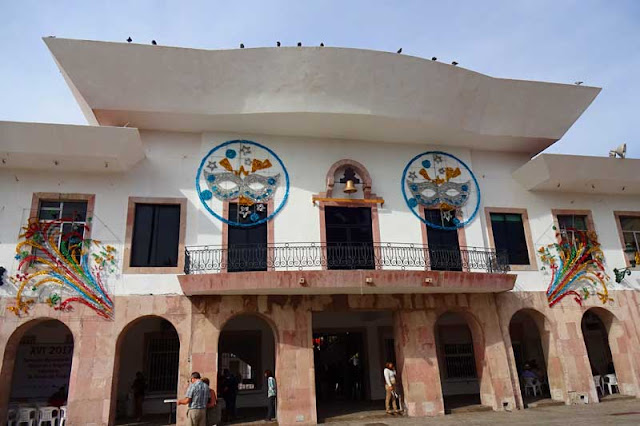 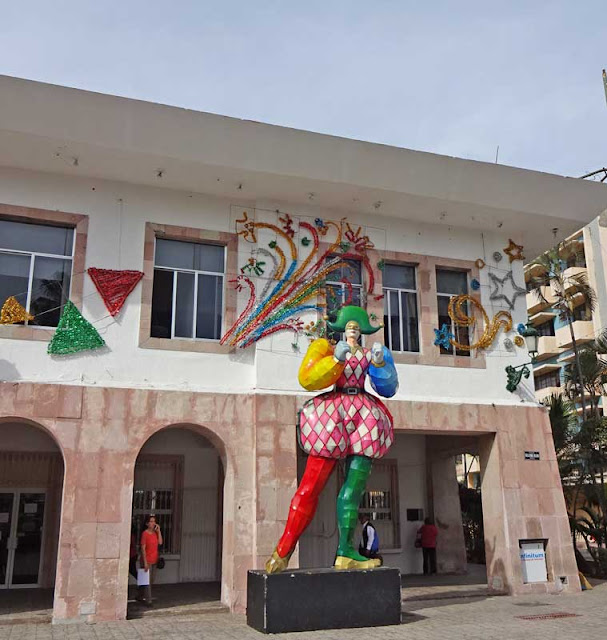 There was a cruise ship in so the plaza was crowded with locals and tourists. We went to the Central Market where Bill bought a new belt and I got a t-shirt with this years colorful Carnaval motif. Walking back towards the car we stopped to watch this man cut the rind from a watermelon. He made it look so easy. Guess his knife was really sharp. 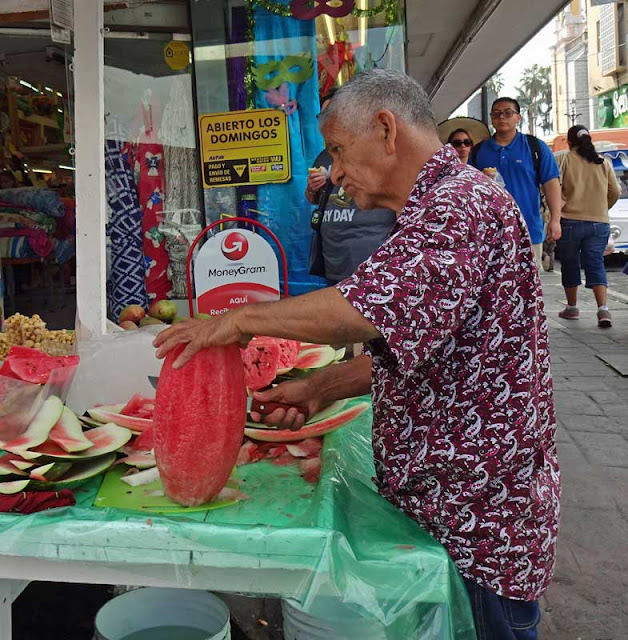 He had cut a lot of rind off already. A big block of ice to keep things cool. 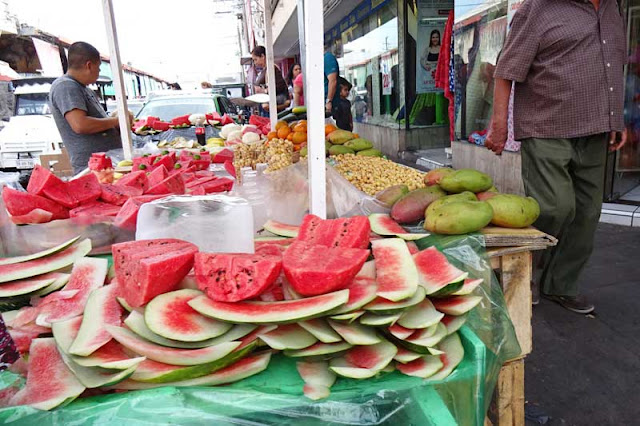 Heading home we met up with the palms again and were detoured on to another street. 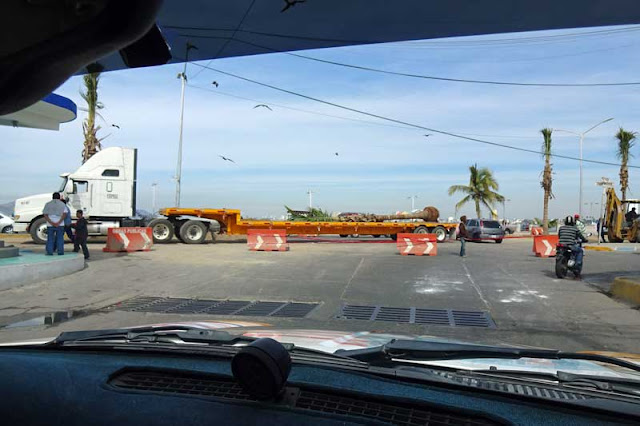 Got a couple more pictures that I missed on the way in. And sun was out a little more.  I like this one. 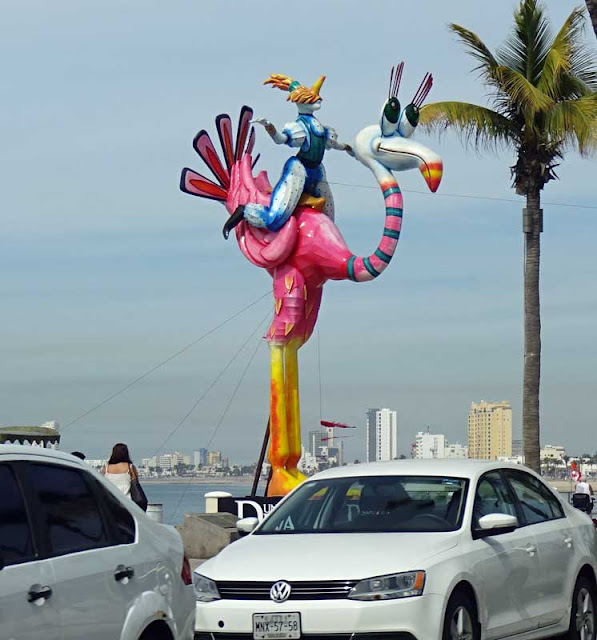 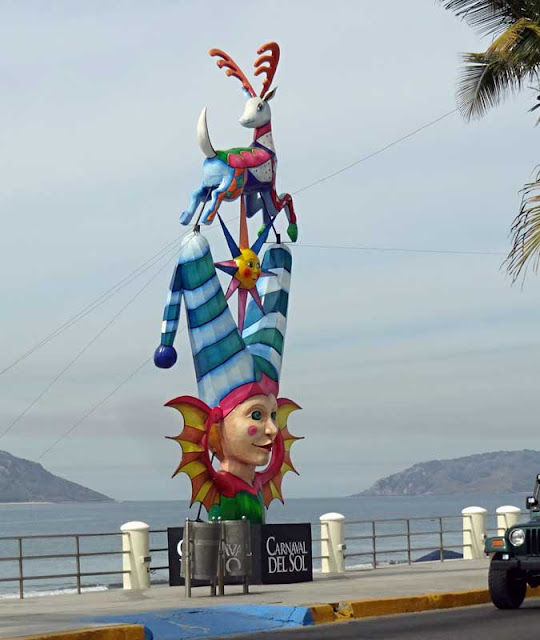 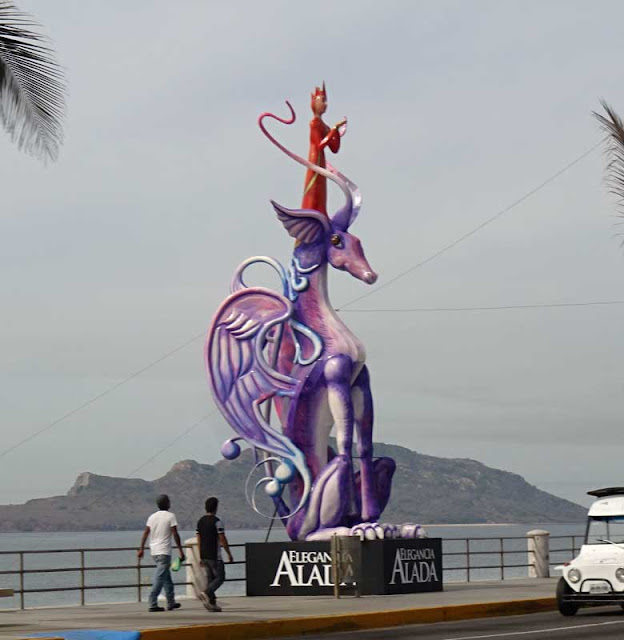 There are signs about Carnaval on the light posts also colored lights strung along most of the Malecon. More decorations than at Christmas 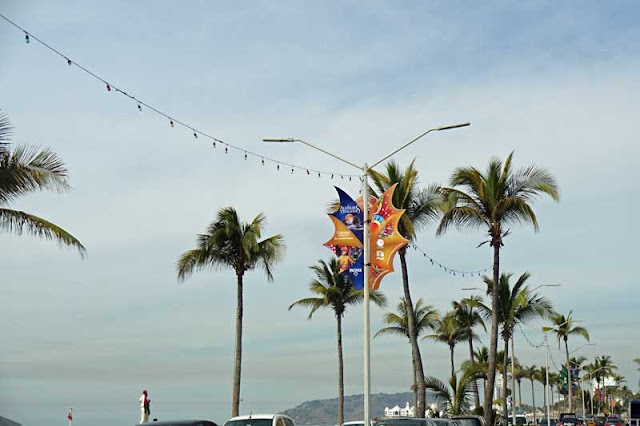 Continuing on towards RV park we passed the restaurant Fat Fish where we always go to eat RIBS. It was named Fat Fish when the present owners bought it so they left the name the same. Strange for a place known for it ribs. I wonder if the people living above it get hungry every time they start BBQing. 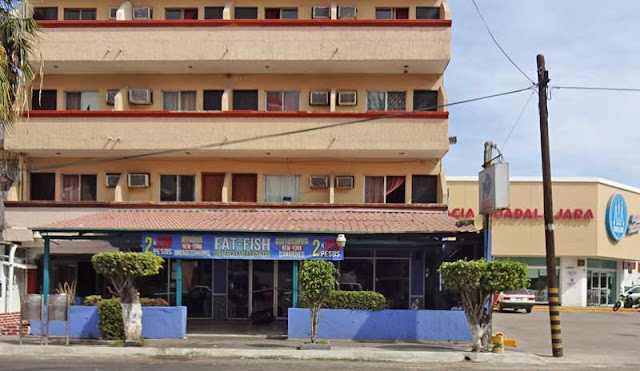 Then a run to Sam's Club for water and some of the roasted peppers Bill likes. Got the water but they didn't have the peppers. Will try another day.
And of course to WalMart for ice cream cheese. Usually they carry sliced Muenster - but they didn't have any. Hope it is on order. Did I mention that we got gas in the car and the price went down from last time we filled up a couple of weeks ago. Be nice if that continued.
Out to dinner with friends to listen to Raphael play and sing.
Got cold here last night again.
Today meet up with friends and going to Plazuela Machado.

Have you ever had watermelon rind pickles? I used to love it as a child and put up a bunch of it in jars when I was a teenager. I was reminded of it when I saw that pile of watermelon rind!

NO don't remember ever having them. But have heard of them.

There seem to be a lot of "joker" looking statues. Who makes those statues?

I knew last year but cant remember. will have to check it out.