Mazatlan is a really busy full of life city.

Yesterday we headed out with two destinations in mind. The quilt shop and the yardage shop. We planned on parking (and while the car was being washed) walking to the quilt shop and then downtown for the yardage. Before we got to Centro our plans were changed. All the roads into Centro from the the road next to the ocean were already closed getting ready for Carnaval! Already!!!
Thank goodness we had already found the quilt shop and knew where it was, as the first road we could get through on lead us right to the street the shop was on. Here it is with their sign out. Bill waited in the car while I went inside to check it out. 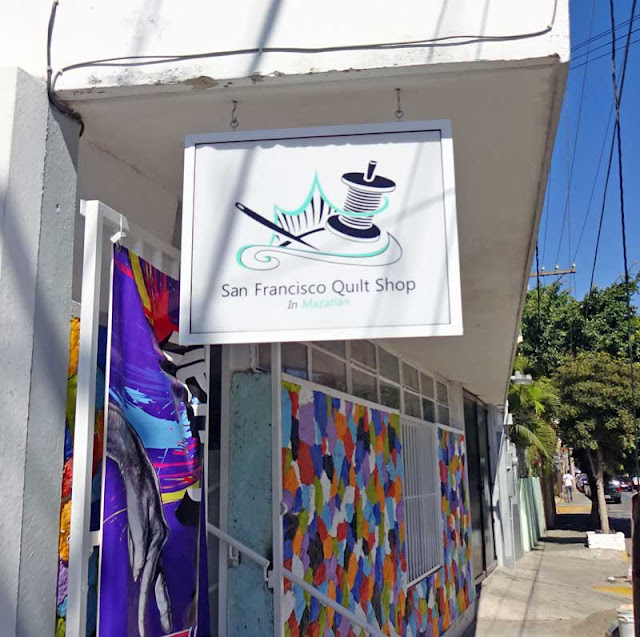 A really big and well set up place. Lots of interesting quilts on the wall and for sale. Several sewing machines set up to use. 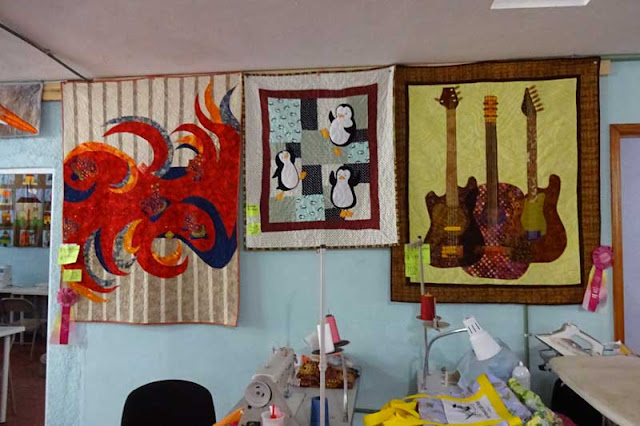 Two long arm quilters. Didn't ask what they would charge to quilt a quilt. Those machines are expensive and it costs a lot to get the quilting done in the states. 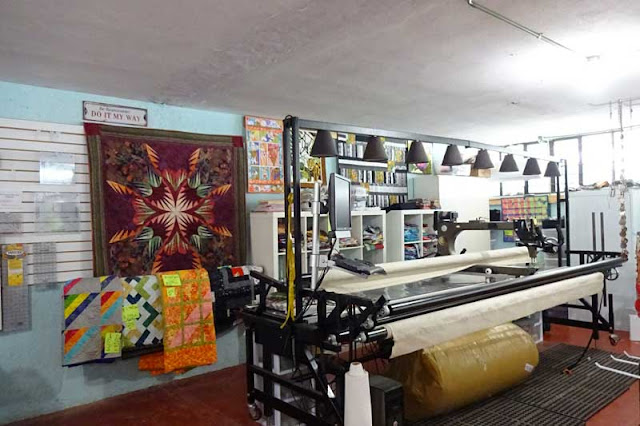 A big cutting table. Lots of good light coming in the windows. They had some material for sale but not a whole lot. Didn't ask prices of material or anything else, just looked around. 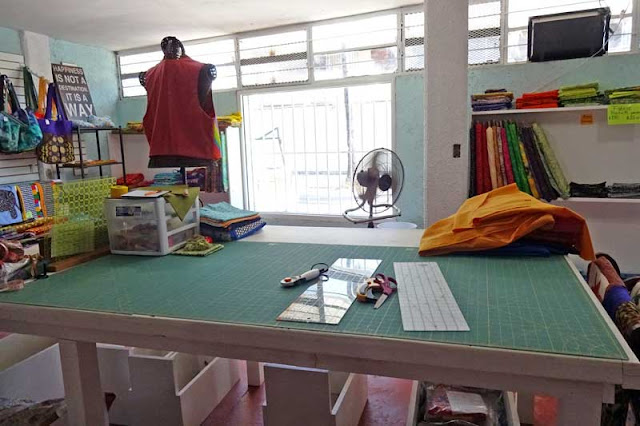 From there we headed towards downtown. I wish they'd put this sign - street closed - at the entrance of the street. Not where it ended. Had to turn around. Glad the Jeep is short and is very maneuverable. 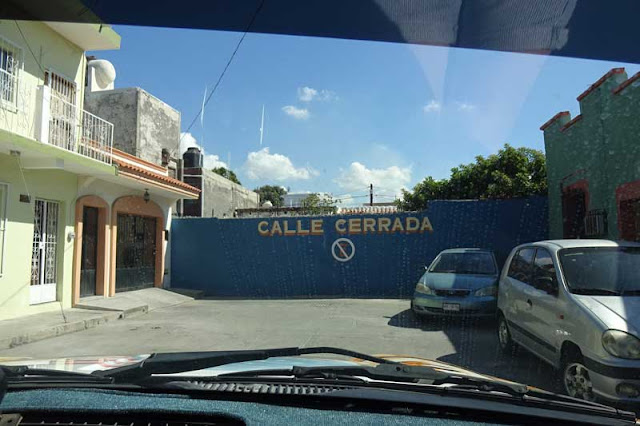 We parked and left Willie to be washed then headed over to the bakery to see if they had any cinnamon rolls left - didn't think they would as it was already 10:30. Much to my surprise they had ONE left. Grabbed it. YUM - it turned out to be my dinner.
Just across the street is the Casa Haas a very beautiful old building that was completely restored inside a few years ago. At the time we were told it would be a Carnaval Museum. But as things often go here that didn't happen. But in the last couple of years they've been using it for art shows, And theater happenings. Usually it is locked tight. Was glad to be able to get in it and see how it turned out. Unfortunately the hallway, stairs, and upstairs were locked off.  Read about it here. 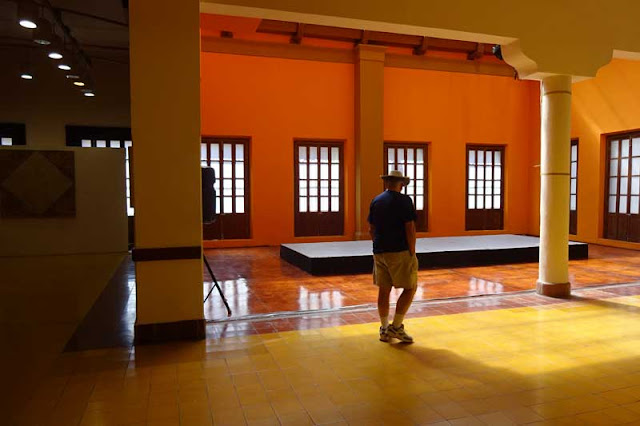 The other day while passing this corner I took a photo of a pick up truck delivering ice cream to this little stand. The logo indicated the stand has been in business since 1938! 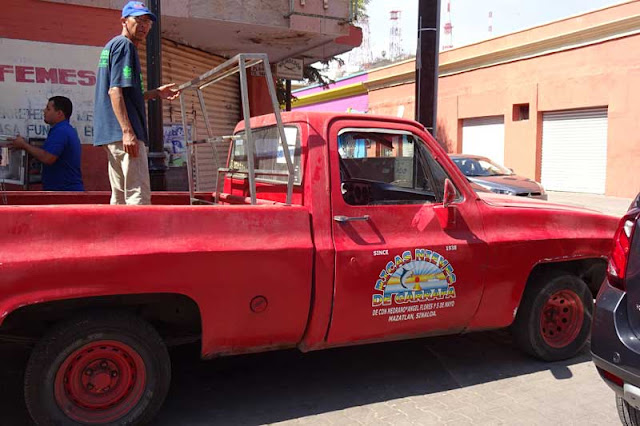 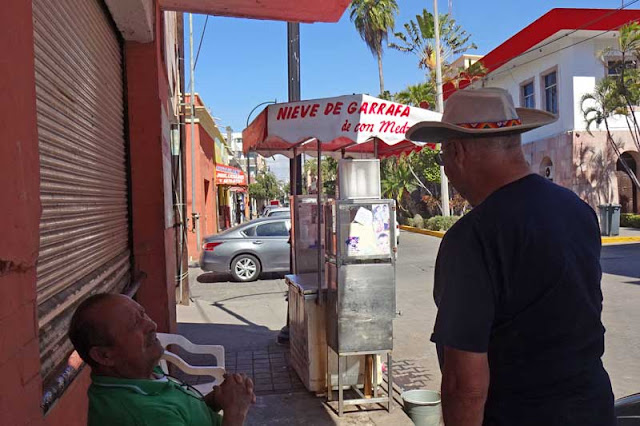 I imagine the stand itself has changed over time, but not the owners or the ice cream. 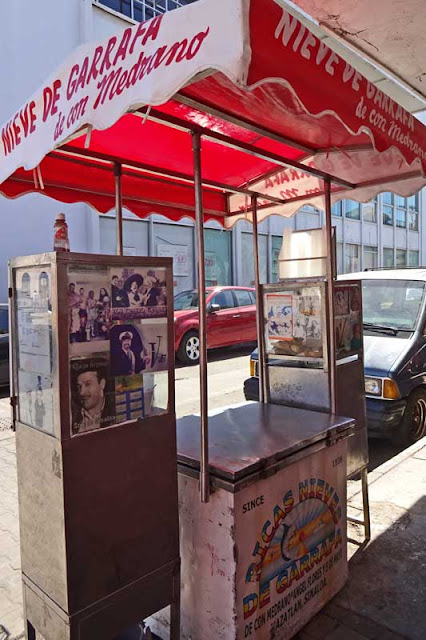 Walking through the main plaza. The pigeons, children and vendors selling toys, snacks, and pigeon food. 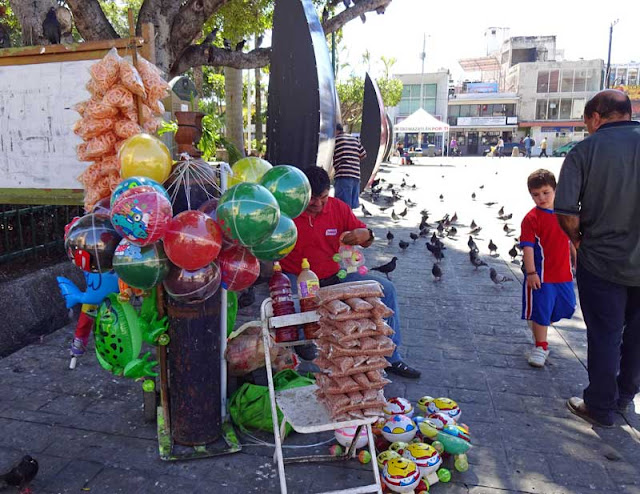 A friend posted about this raspado stand and was asked if it was left over night in the plaza or taken home. So again Bill asked. Raspados are kind of like snow cones. Shaved ice with fruit juice and bits of fruit poured over the ice. I like the strawberry ones. But any way - if you look closely you can see the motorized part of the stand. It is an old pulmonia. Everything on top is put away into the back storage area, the canape folds down and away he goes at night. 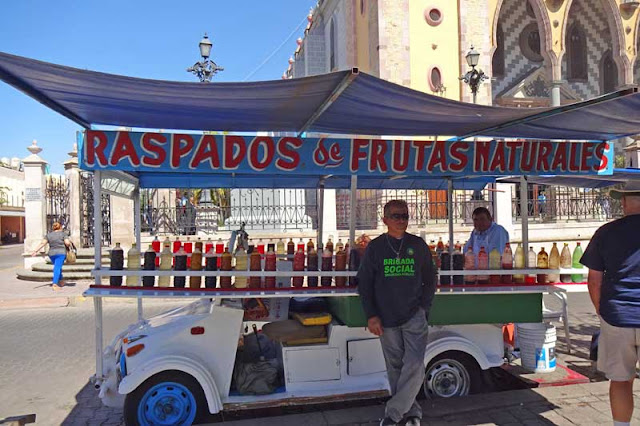 The man in the red stripped shirt is reading from what looked like a Bible. He has a loud speaker hung over his shoulder. You could hear him all over the plaza. Not many people were paying attention to him - just me. Just part of the interesting things in Mazatlan. 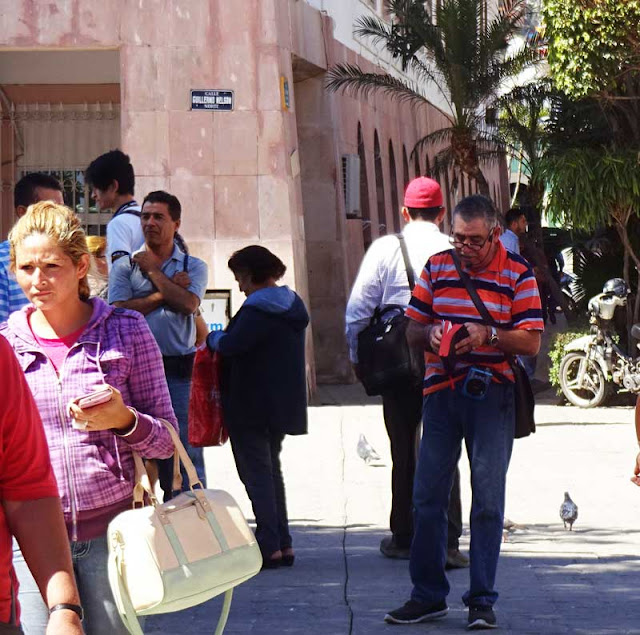 A block away at the other end of the plaza this man is playing the flute and guitar. And selling his CDs. We've listened to him a lot but have never seen anyone buying a CD. Maybe next time we're downtown I'll get one. Very pleasant music. Right next to him where the white umbrella is the shoe man who dyed my sandals for me. 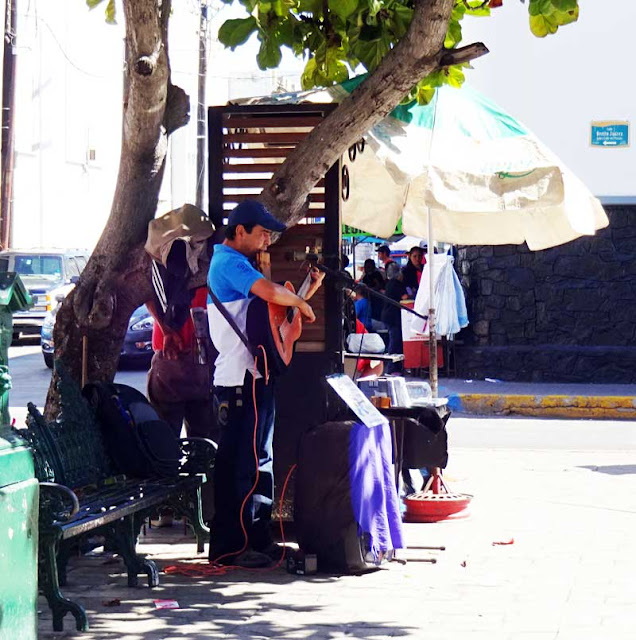 Remember our other objective for going downtown? The yardage store. We went into Parisina and I had a ball. Beautiful, soft, 100% cotton for less than US$5 a meter - close to a yard. Bought one meter of 11 - YES eleven - different fabrics. Might go back and get some other designs. LOVE THEM. Four of them. Mostly butterflies and flowers. 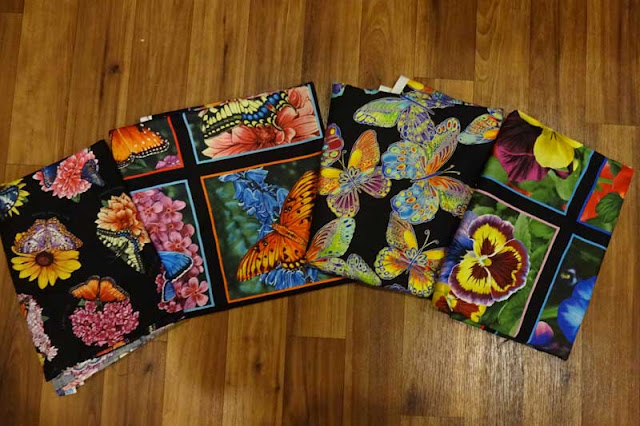 Another three. More butterflies, cats faces and skulls. So colorful. 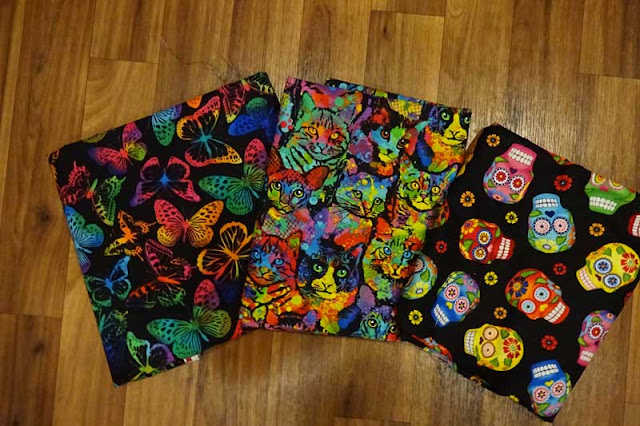 Four more. The one on the left has four different panels of sewing designs, the next one has about 8 squares of animals and sayings, the next six different sunflowers and the last just sun flowers. Don't know how I'll use any of them. But couldn't pass them up. Would be about US$15 a yard at home - if I could find them. 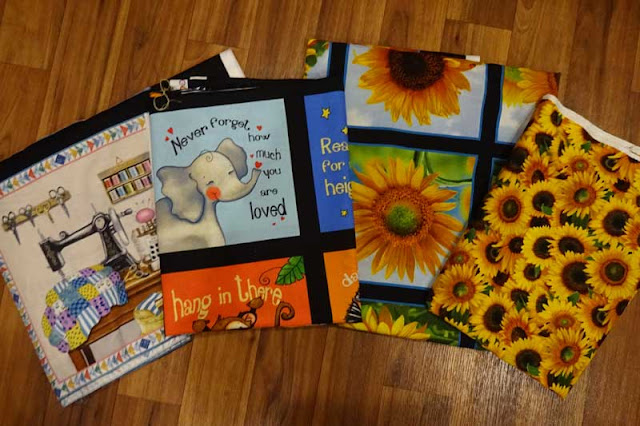 Took my yardage and walked back to the car and left it, with the cinnamon roll and walked to Plazuela Machado. Did you know you could tour Mazatlan on a Segway? I didn't but guess these people did. There were two tourists and a guide. 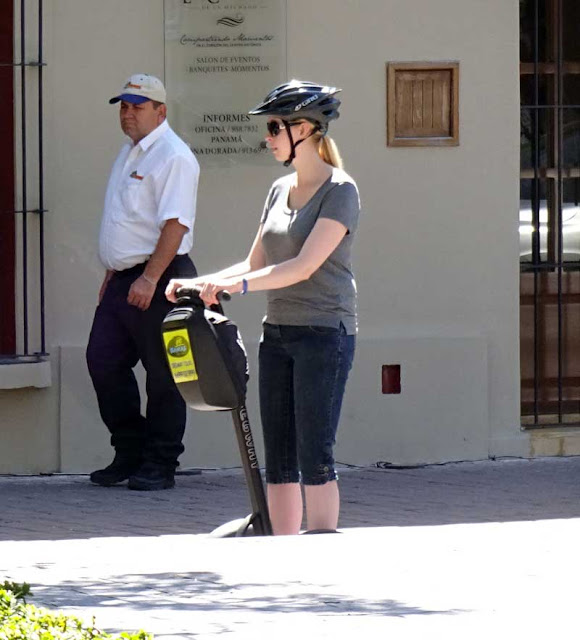 I wanted to get a picture of the Carnaval decoration in the Plazuela - but it is hard to get a good one. The sun is never in the right place for pictures. Here it is - Makes me think of Bugs Bunny on drugs. Cute but weird. 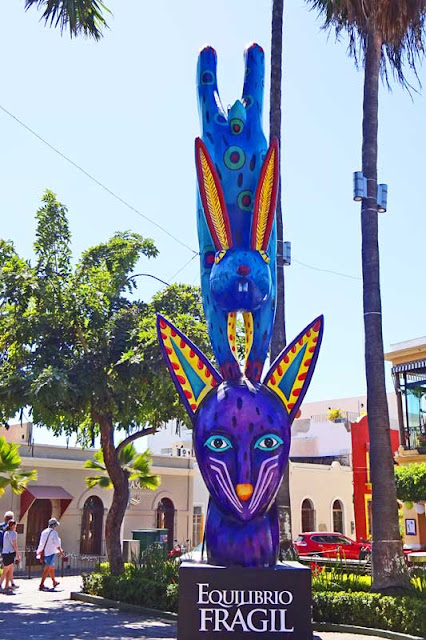 As we were walking back to the car we noticed a new sign outside of our favorite plaza restaurant - Beach Burger. Looks like it has a new name - Restaurant Machado. But Beach Burger menus were still posted outside. So Bill stopped and talked to the waiter. They story he got is - the original owners granddaughters have taken over the restaurant and came up with the new name. So things will be gradually changing. We did notice that the granddaughters have been around the last couple of times we've been there. Also the tables have new table coverings and flowers in vases have been added to all the tables. Also there are now daily specials. AND the last time we were there they actually had real ice tea, not water and a tea bag. So time will tell. 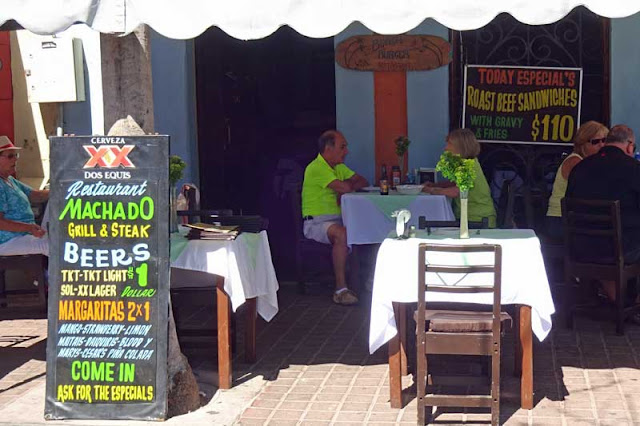 We stopped at the grocery store for a few things and came on home. Spent the rest of the doing nothing. I should have gone out walking but ... I've only been getting about 5-6000 steps in a day. I notice much more than that and my knee and foot ache. Not really an excuse but.
Three RVs left here yesterday heading north. We've only got a little more than two weeks left before we leave.

I have been reading your blog for awhile, and was just wondering what ever happened to your Alfa motorhome, and why did you go to a class C type, is it smaller and easier to get around, we have a Alfa and are planing on heading south to Lo De Marcos next winter, any problems with the 40 footer or is it better to be in a Class C

And this is why we love Mazatlan too!

We had no problems going anywhere in Mexico in the Alfa. Went to Lo de Marcos a couple of times in it.
We are just getting older as was the Alfa so thought we'd downsize. I miss the Alfa and all its space, but a new coach is neat. Both are charged the same at the toll booths.

thanks for the info, we still love our Alfa and would like to use it for a few more years in traveling, and your right with all the storage you can take an extra kitchen sink if you wish, hope to see you along the trail next winter

Great post Carol. I love all the info you shared that Bill was able to get from people.

I am willing to bring it back to Canada with me and mail it from Kelowna, no customs and less postage.