History from town of Escalante, UT

Started this yesterday but didn't finish it. No reason, just didn't.
Our stay in Escalante is ending, tomorrow morning we'll be on the road again. Only 70 miles to Panguitch. We're supposed to stay the weekend but with an altitude of 6500 feet we may cut our time there short.
Escalante was settled by the Mormons in the late 1870s. 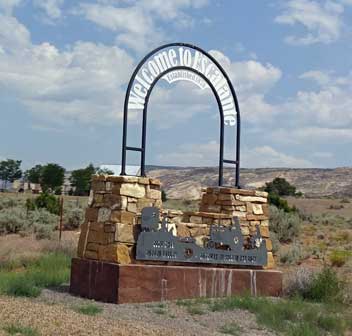 The RV and Willie in the Canyons of Escalante RV Park. Level spaces and good WiFi. Fine place to spend a few days. We didn't get out too much as it was just too hot to be driving or walking around the desert. 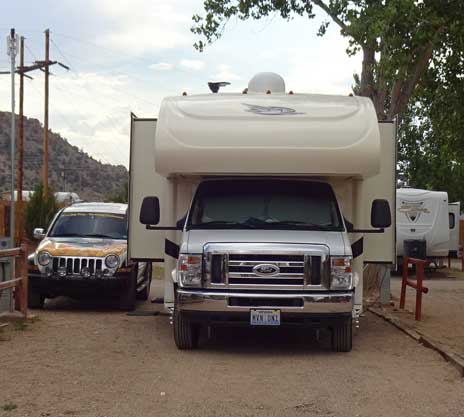 A little about the town. Over 50% of its historically and architecturally significant buildings are relatively intact. The town was laid out following the Zion Plat System. All blocks were 5 acres divided into four 1.25 acre lots. Each property in town had a home, barn, granary, root cellar, chicken coop, one of more sheds, a garden and an orchard. We picked up a little map of the older buildings and drove around checking them out. One of the few wooden homes left standing. Built in 1911. 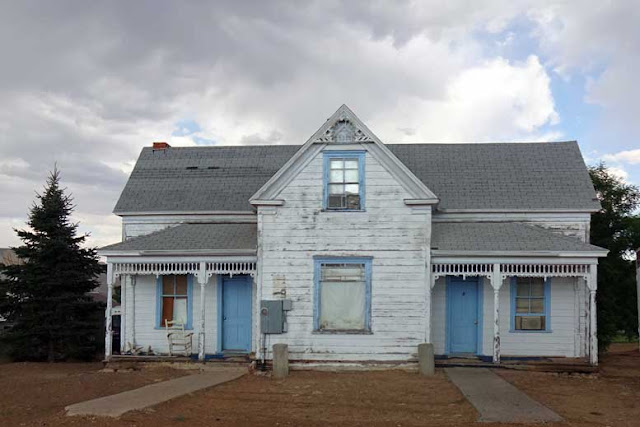 A mural on one of the buildings. 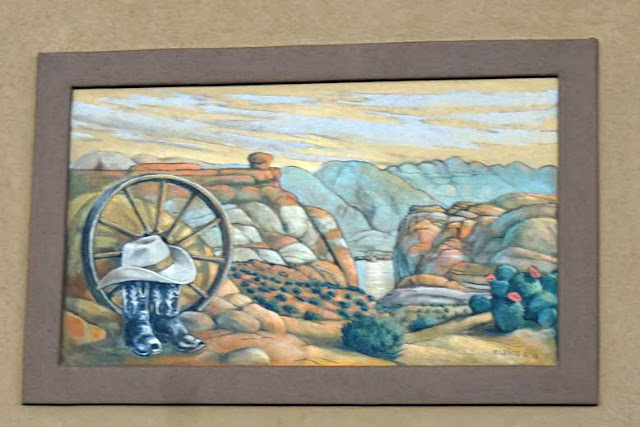 Not sure about this, but thought it deserved a posting. Is that supposed to be John Wayne? 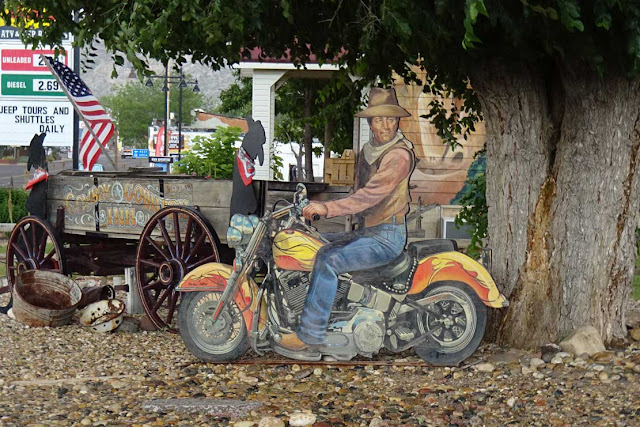 The early buildings were built of locally produced lumber, sandstone, volcanic boulders, sun-dried adobe bricks and fired red clay bricks. One of the older homes that has been kept up and occupied. 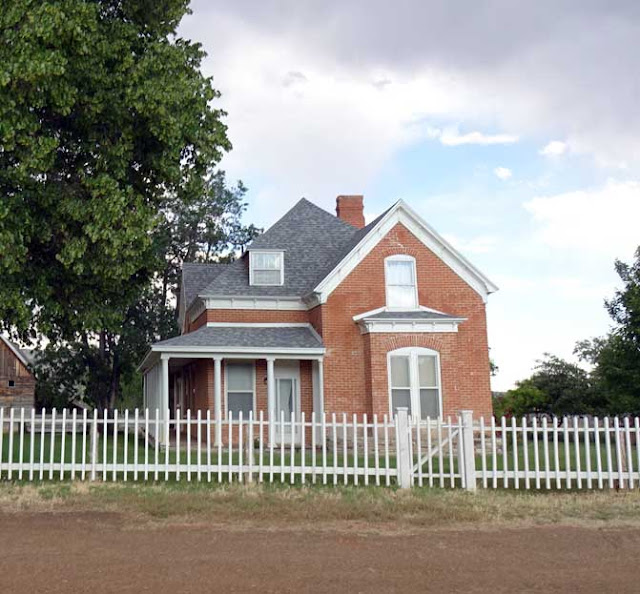 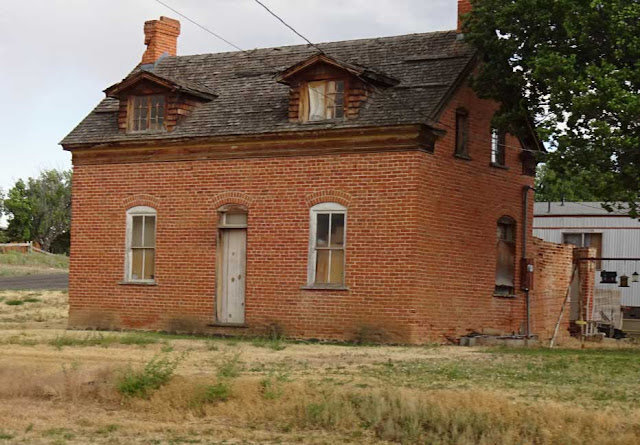 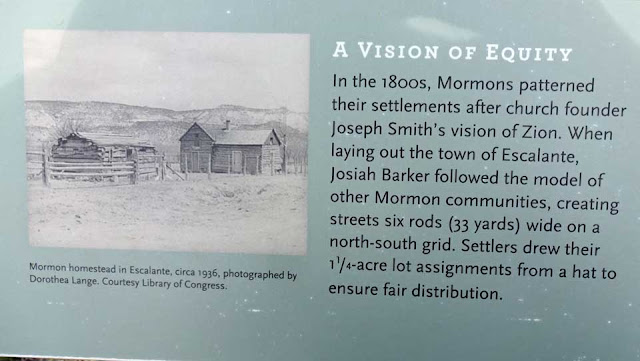 The wind was still blowing while we were driving around, see the dust blowing across the street.  Glad we weren't on the road in the RV. 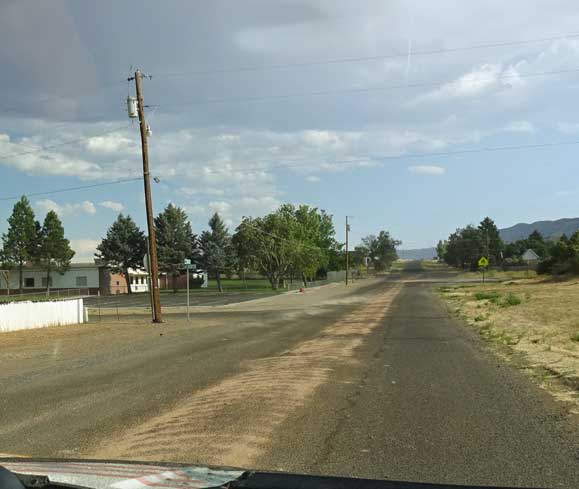 This one has also been kept up and occupied. 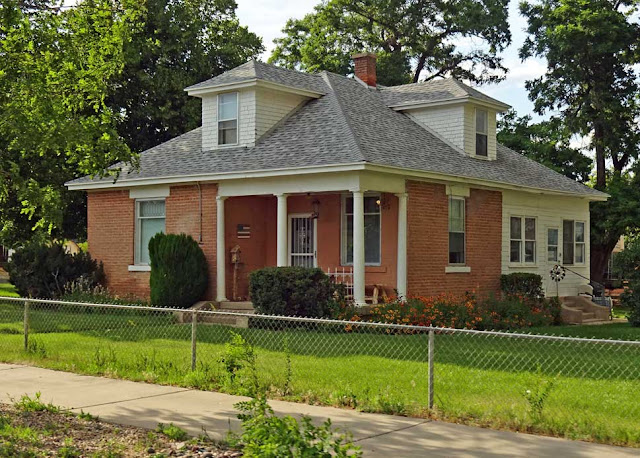 Another one that is falling down. I wonder how much it would take to restore it. The doors, windows, hardware and household were brought in by horse drawn wagons over hundreds of miles of dirt roads. Most manufactured in the Midwest and Eastern factories. 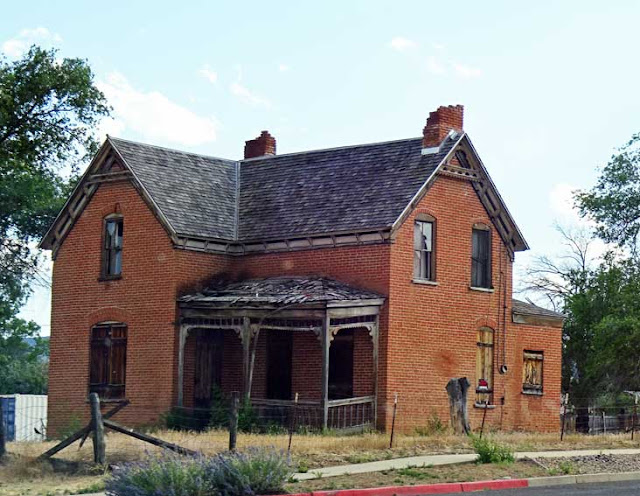 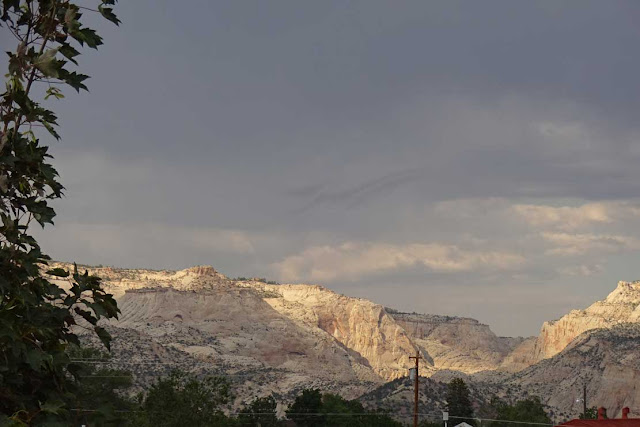 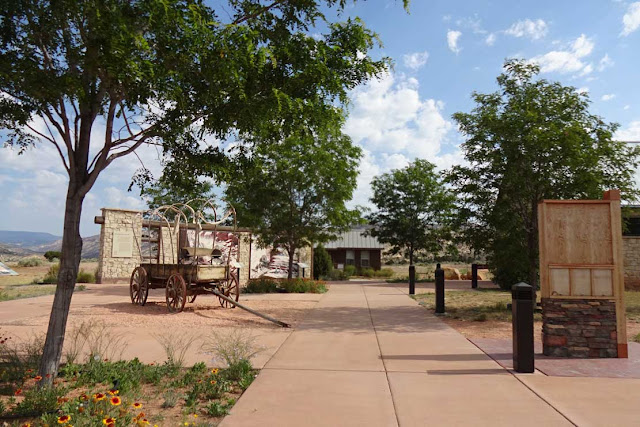 The orange line is their path. They averaged 1.7 miles a day. Where it says Hole in the Rock they had to chisel and blast a path through a narrow steep canyon down to the Colorado River. 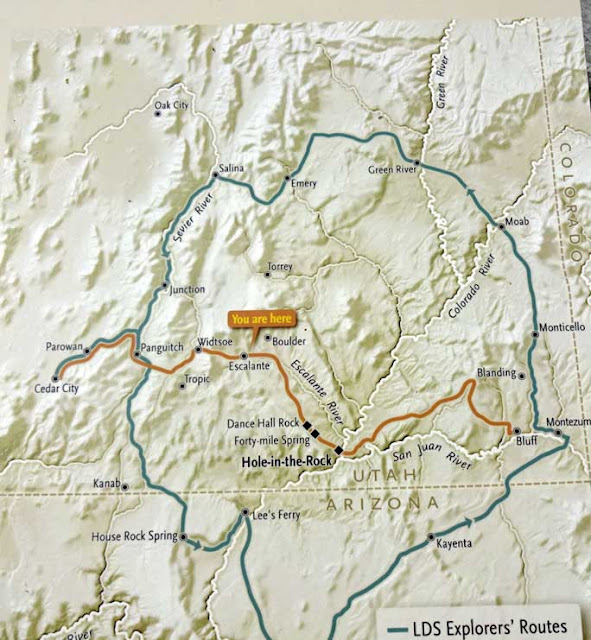 The decent now ends at Lake Powell. We watched a video on how they did this. 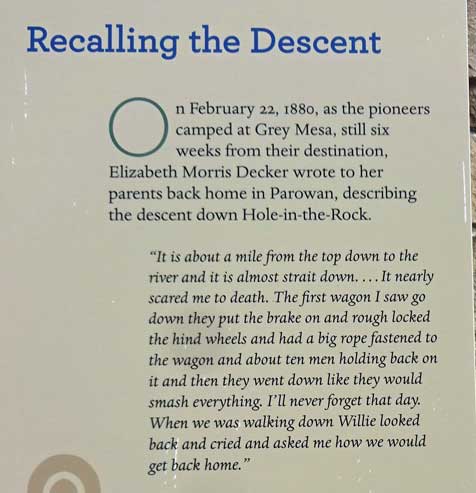 I can't even imagine doing this. Not one life was lost on this journey and a couple of babies were born. 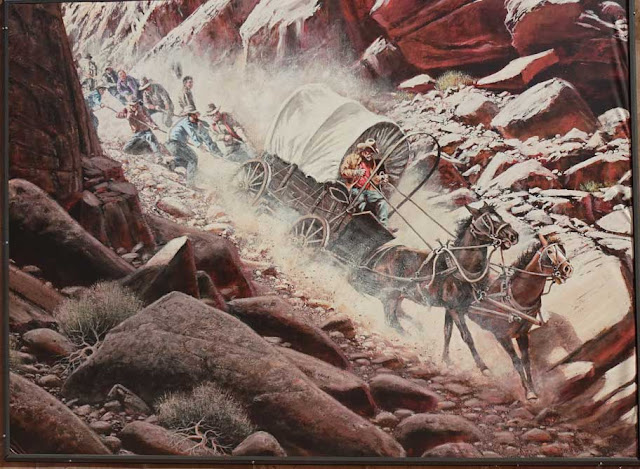 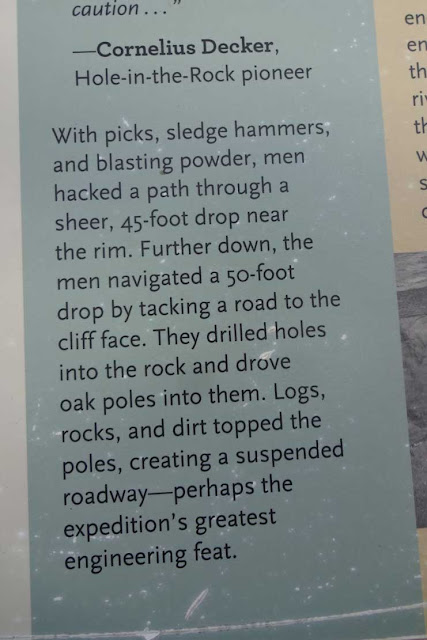 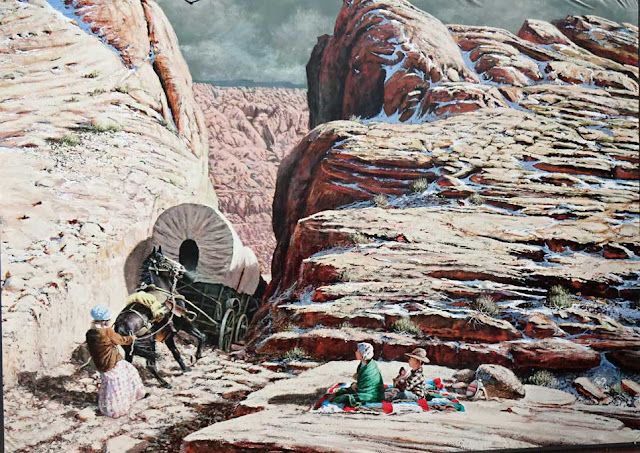 I guess there had to be a "last wagon." 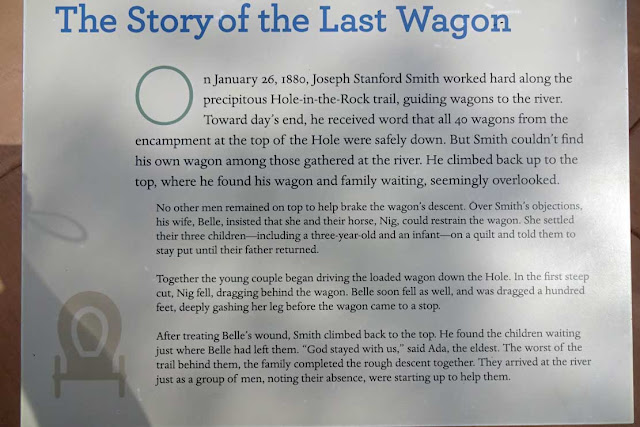 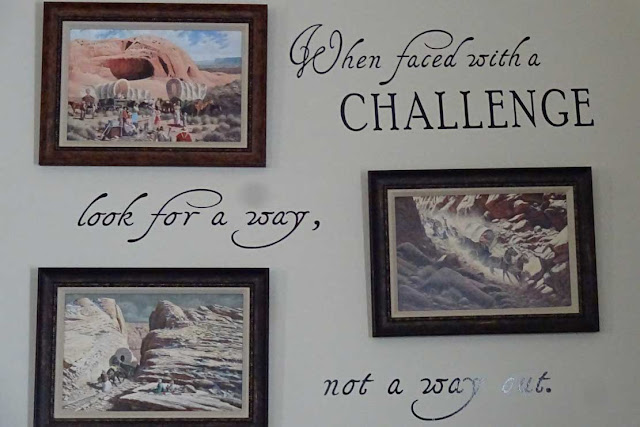 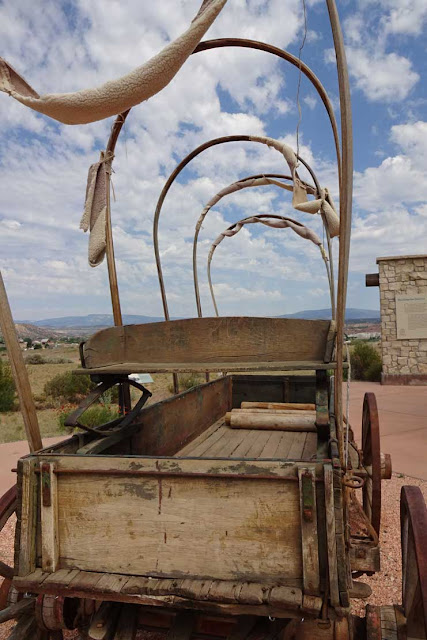 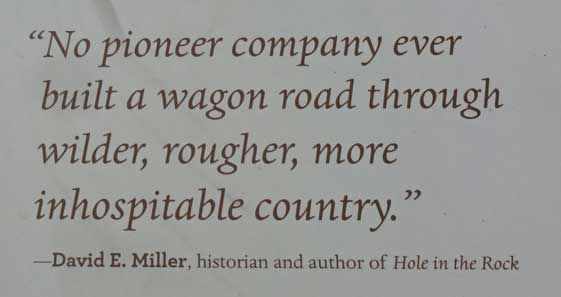 A cabin in Escalante still standing. But not being taken care of. 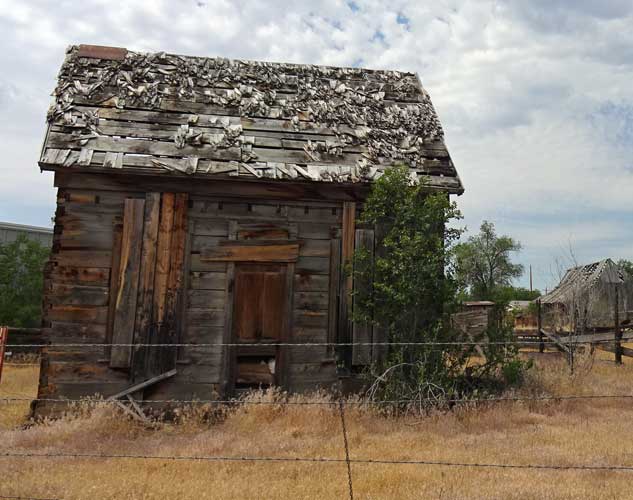 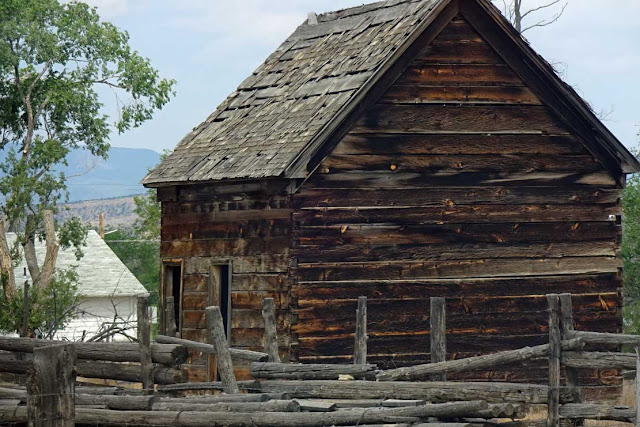 About 5:00 in the evening it got dark outside. Really really weird looking. Spooky. 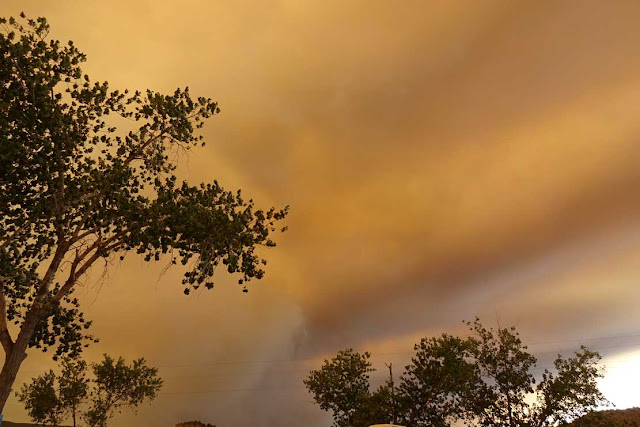 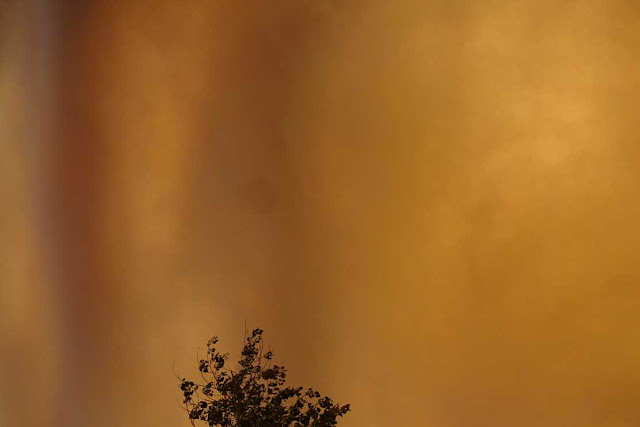 There is a big fire about 60 miles away just outside of Cedar City. The winds were carrying the smoke our way. Couldn't smell smoke and no ashes. Thank goodness. 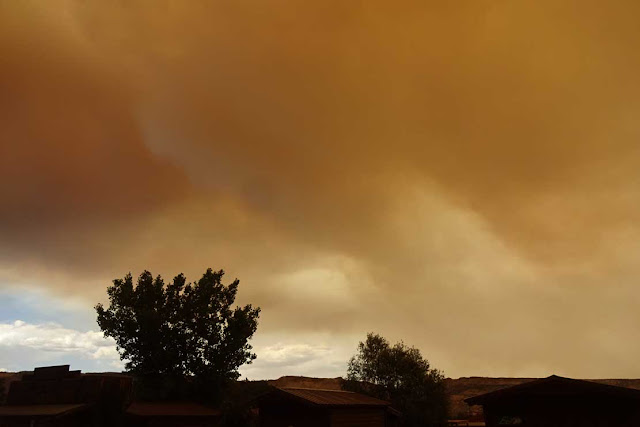 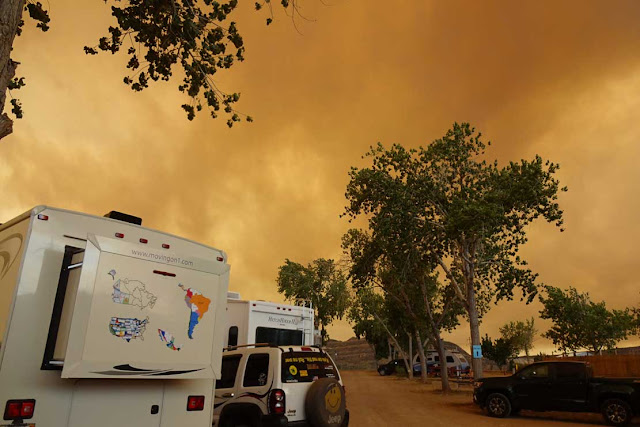 The sun trying to shin through the smoke. 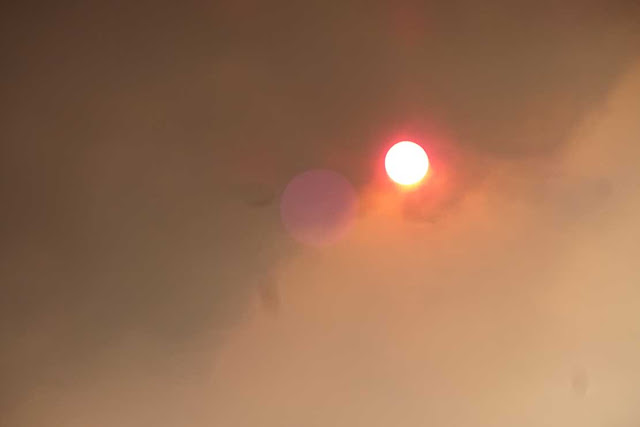 By about 9 the winds shifted and the sky cleared.
Posted by Carol and Bill at 11:10 AM

So much history - thanks for sharing.

Even more to come.

The Greetings. I've been with you for a long time. I have signed under Dirk. I am a Swm 59. Newly retired. I have rented a place in Lo De Marcos for the winter. I am planning on flying. I just had a thought and you and Bill seemed like the perfect people to run it by. I was thinking of offering my service to drive someone's rv for them. I see it's a long drive and I love road trips. I'm sure someone who winters there is dreading the drive. I'm not looking to make money. Just to have fun and help. Especially if they are older or handicapped. Please share your thoughts with me if you will make some time. Thank you. Richard/ Dirk. Us 208 651 6399. I'm not a boozer or druggy. I have a clean driving record.

I love reading about the history of the old west and their struggles while traveling. Makes my travel issues seems awfully minor in comparison!