Panguitch Utah Be sure to read about the Quilt Walk

On Friday we had a short trip from #7 Escalante to  #8 Panguitch. When we got up the sky was completely clear of smoke where we were. Beautiful blue sky for our trip. It was only 70 miles between the two towns, but all kinds of scenery. 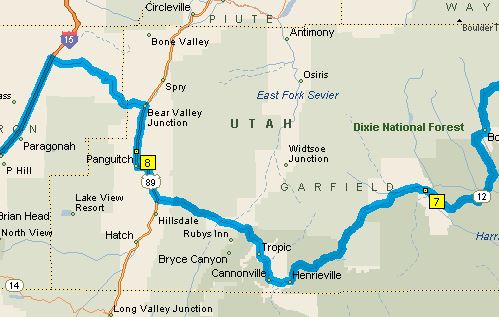 Road was not quite as curvy as coming to Escalante. But it wasn't a road to drive fast on either. 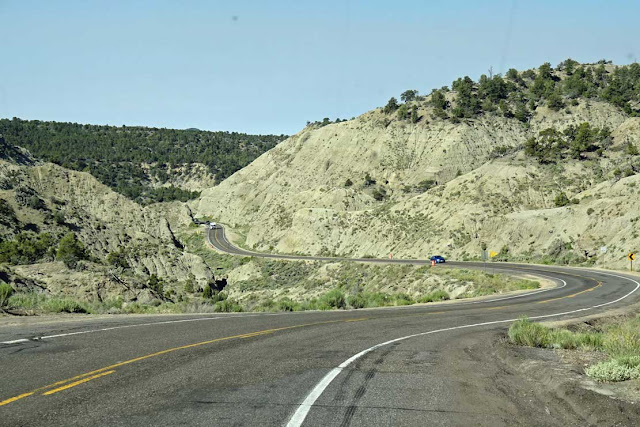 Always strange to have a red/green light out in the middle of no where. Road work ahead, but just a 1/4 mile on flat land. 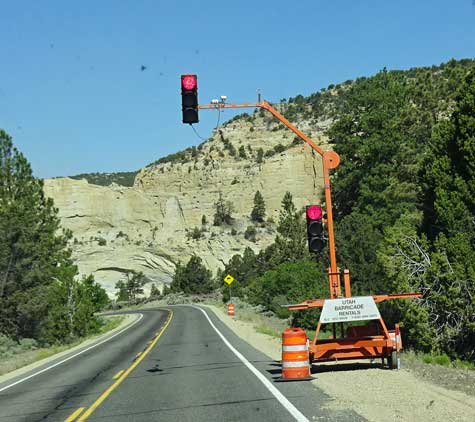 One of the little farming/ranching towns we went through. Pretty hills in the background. 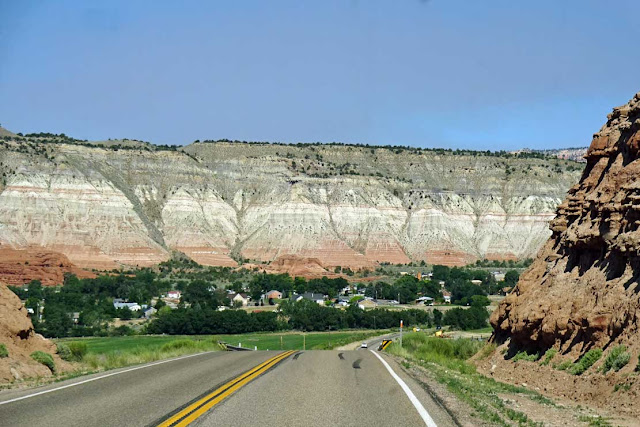 Just an old barn on outskirts of town. 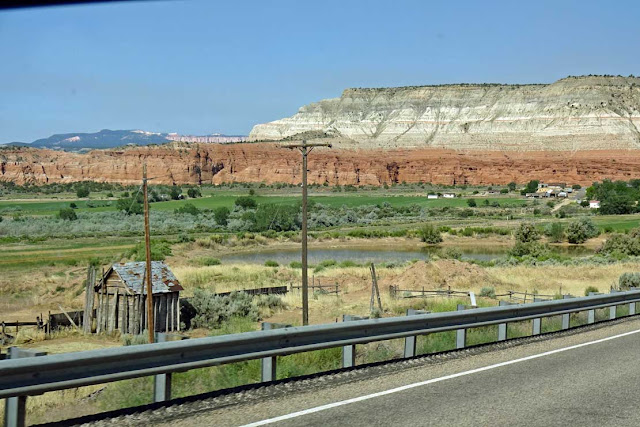 We went through a tip of Bryce Canyon. 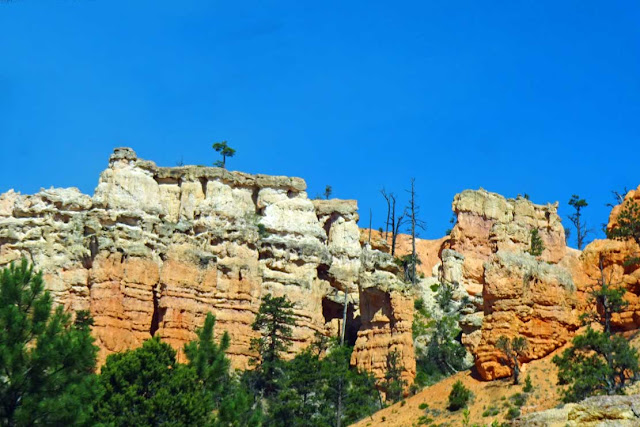 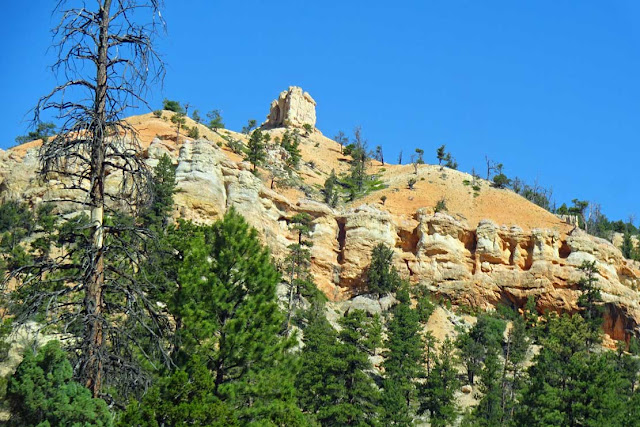 And then through Red Canyon. And it surely was red. 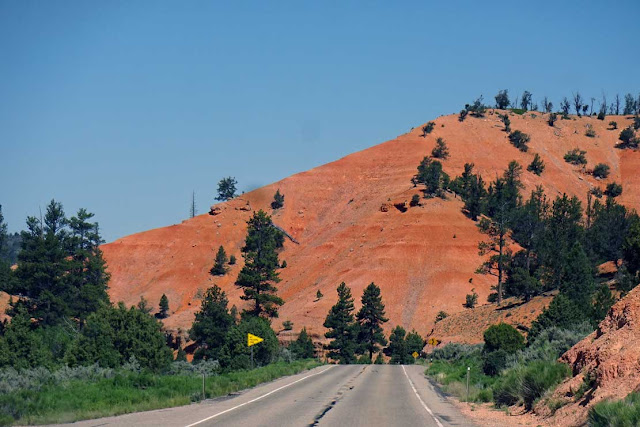 Had to go through two very short tunnels. 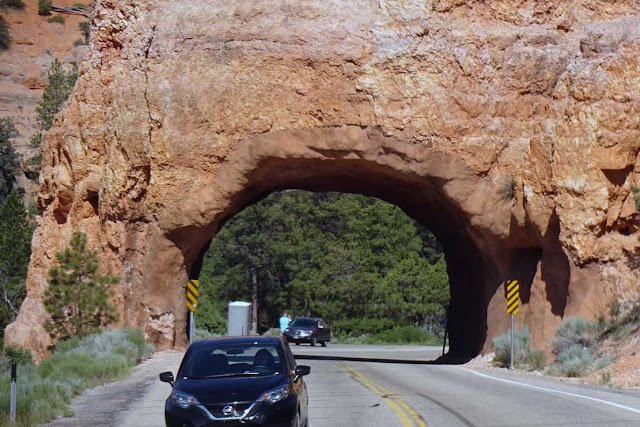 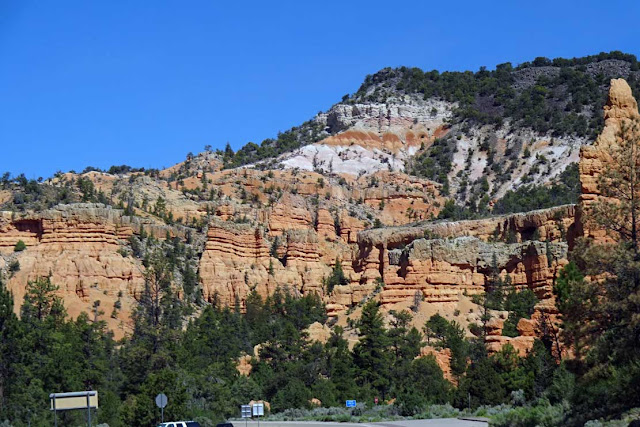 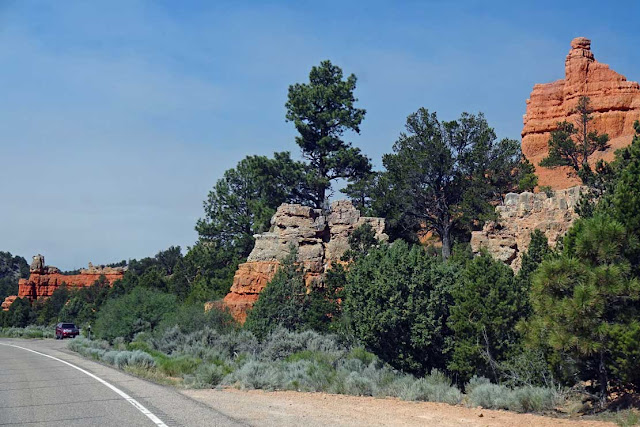 Getting near Panguitch we can see the Brian Head fire burning. Luckily the wind was blowing the smoke away from where we were going. 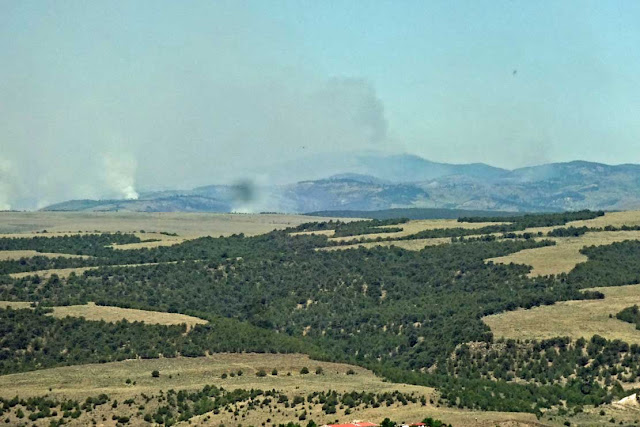 Panguitch is a town of about 1500 people. Founded in 1864. One of the founders of the town was Jens Neilsen. He was quite a man. He was Mormon and originally came to Salt Lake as part of the Hand Cart Trail. Here is some information about the handcart pioneers.

In 1856, the church inaugurated a system of handcart companies in order to enable poor European emigrants to make the trek more cheaply. Handcarts, two-wheeled carts that were pulled by emigrants instead of draft animals, were sometimes used as an alternate means of transportation from 1856 to 1860. They were seen as a faster, easier, and cheaper way to bring European converts to Salt Lake City. Almost 3,000 Mormons, with 653 carts and 50 supply wagons, traveling in 10 different companies made the trip over the trail to Salt Lake City. While not the first to use handcarts, they were the only group to use them extensively.
The handcarts were modeled after carts used by street sweepers and were made almost entirely of wood. They were generally six to seven feet (183 to 213 cm) long, wide enough to span a narrow wagon track, and could be alternately pushed or pulled. The small boxes affixed to the carts were three to four feet (91 to 122 cm) long and eight inches (20 cm) high. They could carry about 500 pounds (227 kg), most of this weight consisting of trail provisions and a few personal possessions.
All but two of the handcart companies successfully completed the rugged journey, with relatively few problems and only a few deaths. However, the fourth and fifth companies, known as the Willie and Martin Companies, respectively, had serious problems. The companies left Iowa City, Iowa, in July 1856, very late to begin the trip across the plains. They met severe winter weather west of present-day Casper, Wyoming, and continued to cope with deep snow and storms for the remainder of the journey. Food supplies were soon exhausted. Young organized a rescue effort that brought the companies in, but more than 210 of the 980 emigrants in the two parties died.
The handcart companies continued with more success until 1860, and traditional ox-and-wagon companies also continued for those who could afford the higher cost. After 1860, the church began sending wagon companies east each spring, to return to Utah in the summer with the emigrating Latter-day Saints. Finally, with the completion of the Transcontinental Railroad  in 1869, future emigrants were able to travel by rail, and the era of the Mormon pioneer trail came to an end.

Jens Neilson also was one of the first settlers of Panguitch. 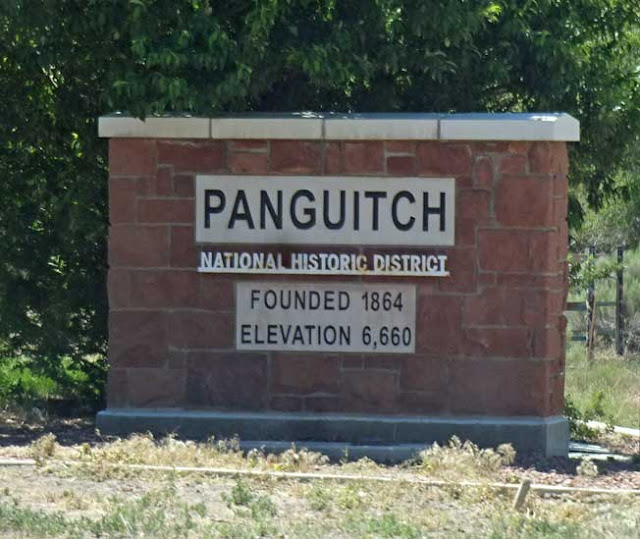 Click here to read more about Jens Neilsen. He lived to be 85!
This weekend is the Balloon Rally. Didn't know that when I picked this RV park. Lots of vendors and music going on in the downtown area. Quiet out where we are a couple miles north of town. At 6:30 the 30 or more balloons go up. Hope I wake up in time to see that. And I hope the smoke has cleared and the wind let up. 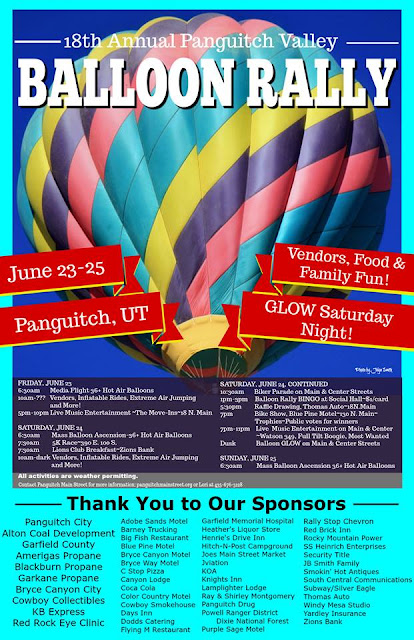 Tomorrow night is the Balloon Glow right downtown. Sure want to see that.
The Paradise RV park where we are. Good WiFi, level gravel spot only $15.50 a night. We're going to be here until Monday if the altitude doesn't bother Bill too much - 6500 feet again. And if the smoke keeps blowing away from us. 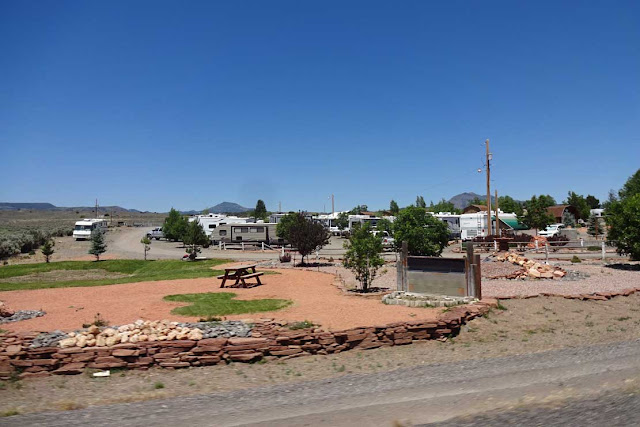 The smoke from the campground. On the map at the beginning of the post you can see where we are and were Brian Head is- lower left corner. About 25 miles as the crow flies. 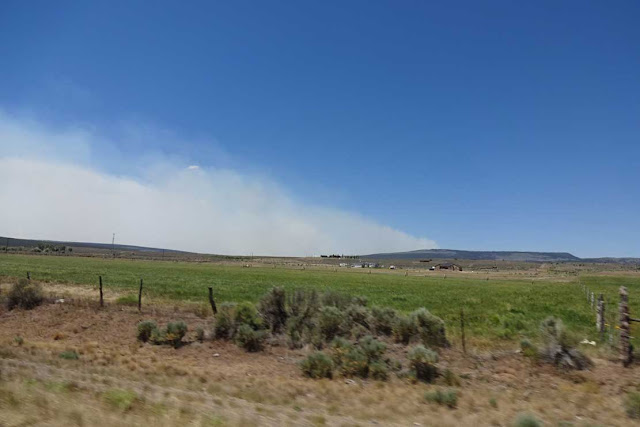 Some pictures of downtown. We went in to the grocery store and to find out for sure where the balloons go up. 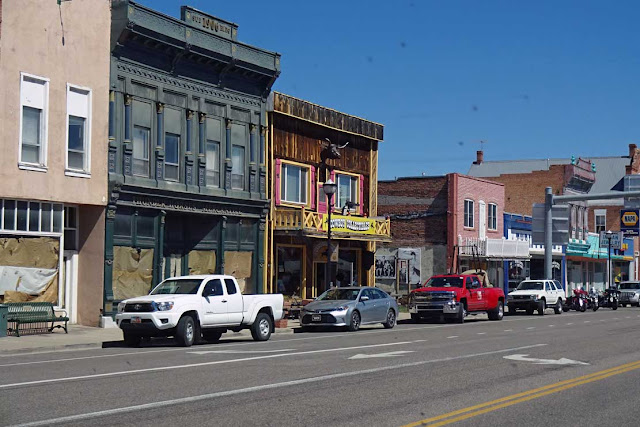 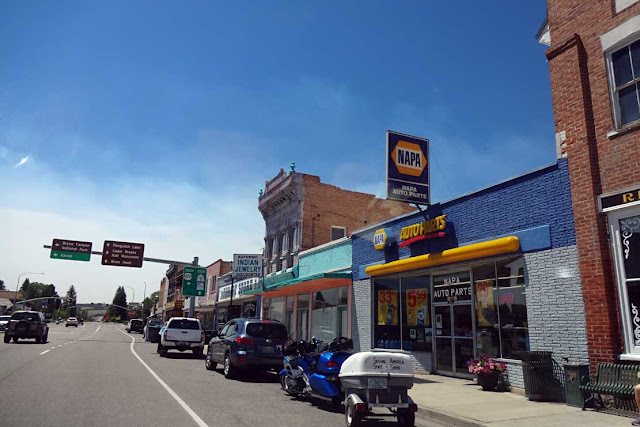 Saw this statue in the Quilt Walk Park. Then I remembered reading about the walk. The settlers of Utah were amazing. Jens Neilsen first went to Paragonha [also showing on map above] before coming to Panguitch. He left Panguitch and went to Escalante then his family was one of the families that were on the Hole in the Rock trail.
Click here to read about the Quilt Walk. Very very interesting. 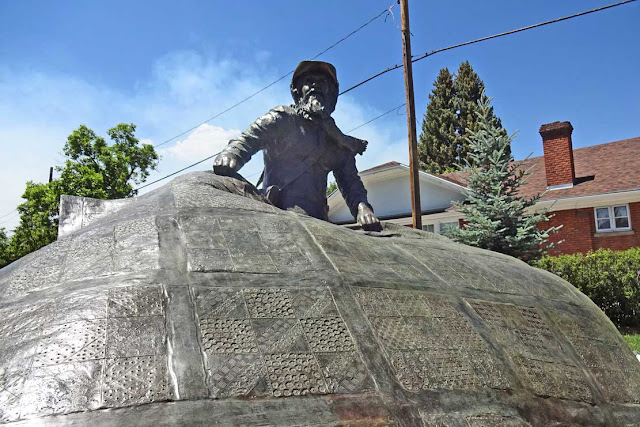 Here is the state of Utah's map of the fires. lower left is the Brian Head fire. 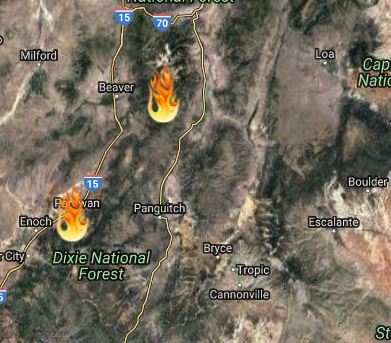 About 5:00 smoke is getting worse. So far it has burned 28,000 acres. And about 8 buildings, but it is burning around a lake with a lot of homes. 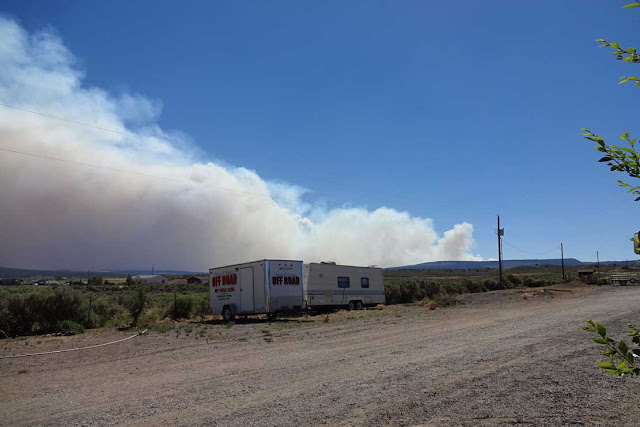 ﻿
The fire has grown over night. Continues to be lots of smoke in sky. Still south of us, though I can now smell it.
We went to the balloon festival this morning. LOVED IT
Posted by Carol and Bill at 10:12 AM

This is a fun place with a two-faced appeal. The top floor is for all that sass and oomph. The LA event venues were super packed, but we just wanted to check it out. Loved the solid selection of quality craft beers.