Merry Christmas Eve to all

Even with all the Christmas lights up around the RV's it just doesn't feel like Christmas. Didn't even put up any decorations this year.
Late afternoon there is a Christmas Eve happy hour here in the park. Been invite but not sure if we'll make it. And tomorrow there is a big Christmas dinner here. Turkeys provided by the manager, pot luck from everyone else.
The weather here has changed again. Nice, 81/82 during the day but by 4:00 the wind picks up and the temps drastically drop to low 70s high 60s. During the night down to the 50s. Bill is freezing. Had the furnace on yesterday morning and the little heater on all night last night.
He was so cols last evening he decided to cook. Sounded good to me. He made a tortilla - no not the flat flour or corn tortilla, but a meal in itself. A Spanish Tortilla.
Spanish omelette is the English name for a traditional dish from Spanish cuisine called tortilla española, tortilla de patatas or tortilla de papas. It is an omelette made with eggs and potatoes, sometimes also with onion and/or chives or garlic; fried in oil and often served cold as an appetizer. It is part of the cuisine of Spain and many South American countries, especially those in the area of the Rio de la Plata.
Here is his. Very good and filling. It has sliced carrots, potatoes and onions. Pieces of thinly sliced ham and of course eggs. He put slices of cheese on top of it. We ate it warm. 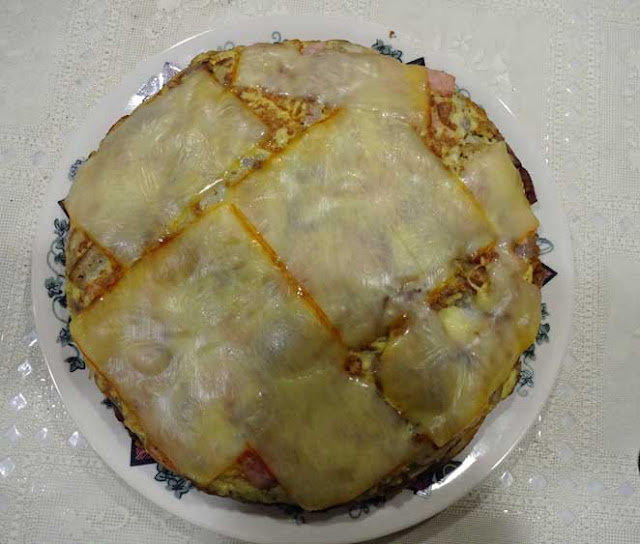 There is a lot of work going on in the RV park. Whole RVs being painted and other having maintenance or mechanical work done on them. Our neighbor having his slide worked on. Getting under it was pretty tricky. 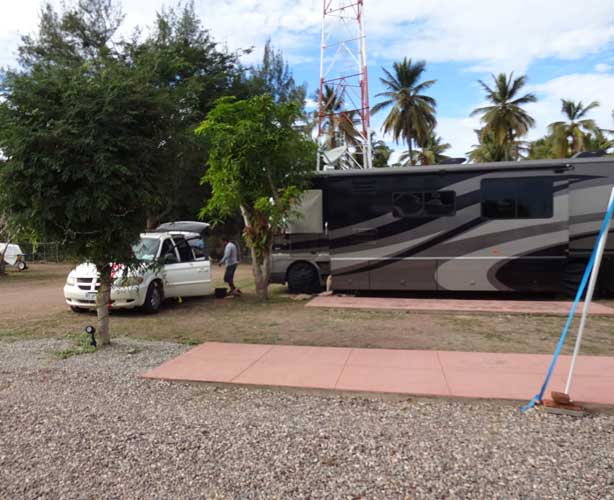 The only thing we did all day was go to the supermarket to pick up a few things and order a cake for the pot luck Christmas Day.
Think it would be uneventful. BUT! We'd left the market and were waiting for the traffic light to turn green. When suddenly there was the sound of a BIG EXPLOSION! Right near us. WHAT? Then I realized the car had quit running and other people were looking at us. At us? WAS THAT US? I asked. My heart was beating so fast it thought it would come out. "Hum..." Bill answered as he put on the hazard lights and unlatched the hood. OMG we just blew up - went through my mind. OMG! But there was no smoke and/or no fire that I could see. By then Bill had the hood up and was fiddling with something. Put the hood down, got back in the car, turned the hazard lights off and started the car. And off we went. "What the #@$% happened?" I calmly asked. Yah right, I could hardly breathe my heart was pumping so fast. "Nothing to worry about," was the calm answer I got. "Did we blow up? Is the car okay?"
"It's fine. A line from the air conditioner BLEW apart and the freon came [exploded] out." No problem. Called mechanic he will be here on Tuesday to reattach the line - tighter I hope and put in more freon and all will be well. Except I aged 5 years in 5 seconds. This will be the third time he has worked on AC. First he had to replace the condenser, then a couple of days ago the gasket on the compressor - it was old and rotted and he put in a new expansion valve - that is what blew.
And so another day passed in paradise.

Wishing you two a wonderful Christmas and a safe and healthy 2018.... See you soon...

Yum to the tortilla de papas - we often have the "West Virginia" version of that - so yummy.
Merry Christmas Carol and Bill.

Thank you - not long now!