It continues to rain off and on, sometimes a drizzle sometimes hard. What happened to sunny perfect weather Mazatlan. Forecast is rain until Monday. Maybe I'll try using my oven and make some muffins today - and then again maybe not.
Update. I did make the banana nut muffins. Eight of them are good, two are okay and two are crispy critters. Need to find a thermometer for the oven and I guess a tile of some sort to put between flame and pan. First time I've used the oven except for storage. 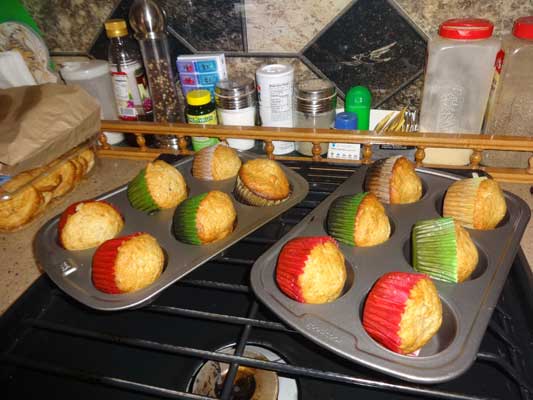 And then I outdid myself and COOKED dinner. We had paella with chicken. Just added the rice in this picture. 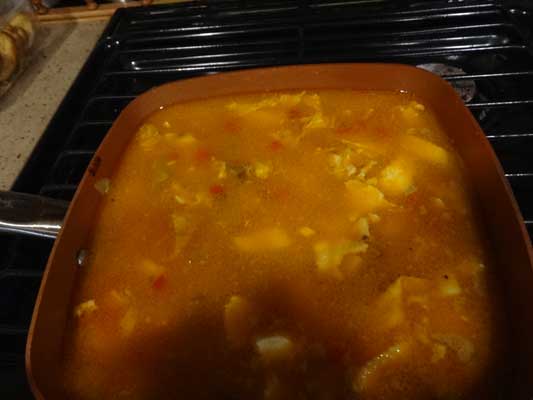 Almost done cooking here. It was very good. And quick and easy to make. 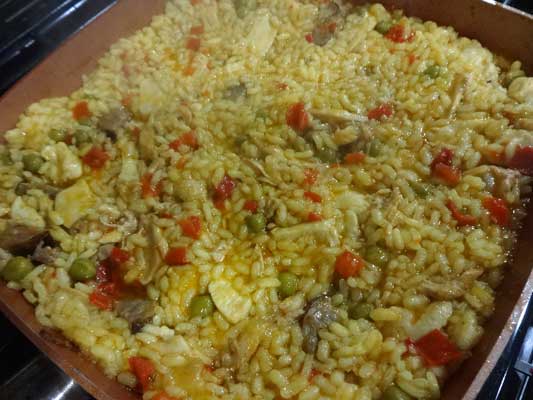 My secret...Paella de pollo in a can. Produced in Spain, bought at Soriana grocery store. It tasted very good. I just added a little more chicken. Today we are going to store and buying a few more cans to keep on hand. Bill has eaten paella in Spain and he says this was very good. 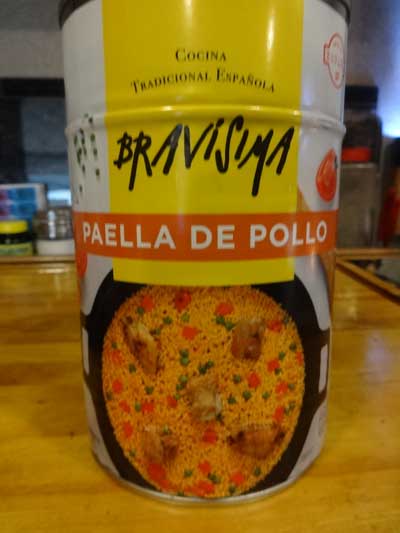 So for this post some pictures I've taken and not posted and some pictures from El Quelite. Yep we went there for breakfast Thursday morning in the drizzle. Crap, just remembered that I was going to take pictures of all the food. Too late now.
One sunset taken from the Torres restaurant. Monday night I think. 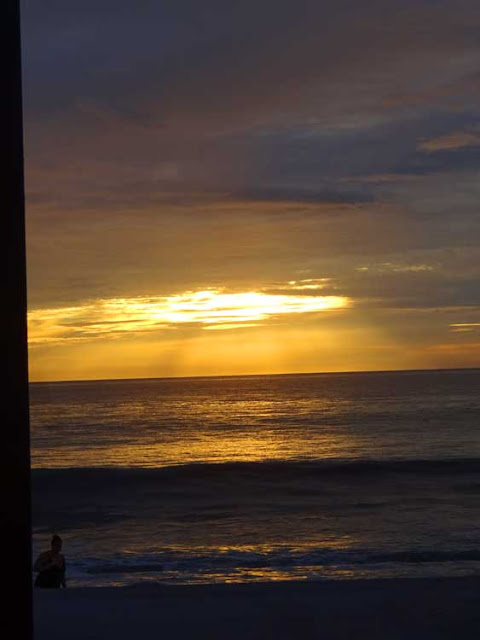 And now some bird pictures. We are again able to put fruit on the "bread/fruit tree" as the bees have disappeared. I hope they stay gone. The first picture is of the birds at the Torres restaurant. They are clever. Baskets of tortilla chips are under the tablecloth. The birds have figured out how to move the cloth and get to the chips. The one looks like he is laughing. 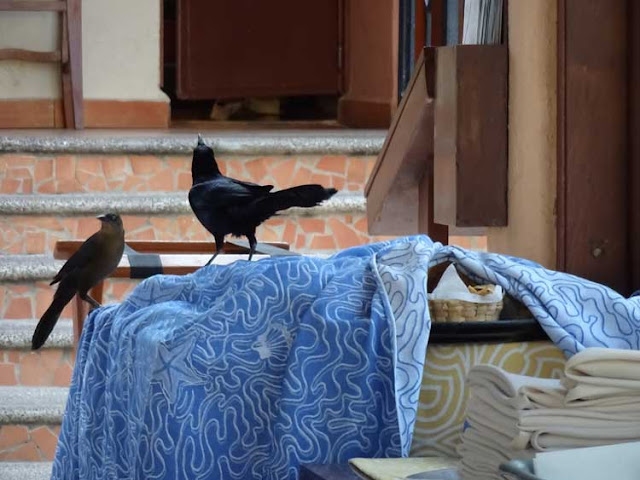 Some pictures from our tree. 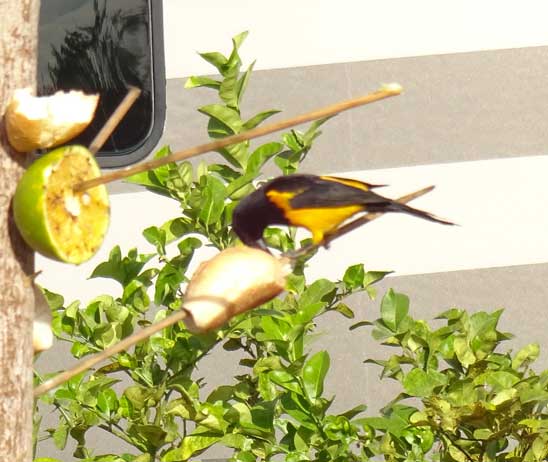 Hurry up and take the picture. 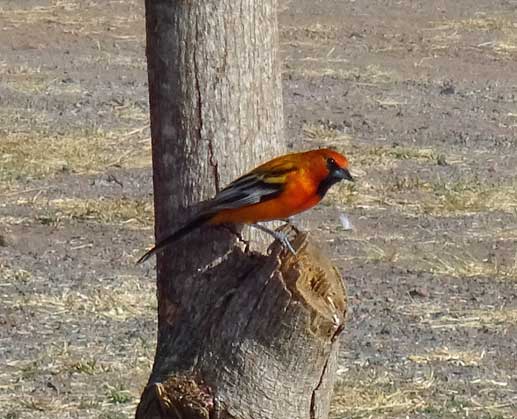 He is having a bad hair day. 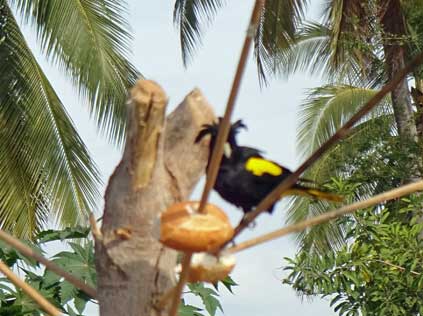 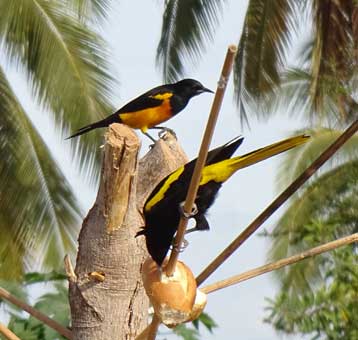 This one never eats, just sits and watches. Guess he just likes bugs. 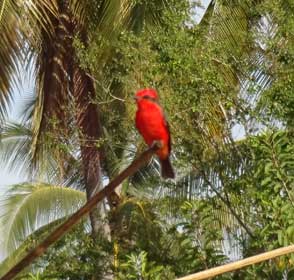 Had his feathers in a ruffle over something. Love his tail - so bright yellow. 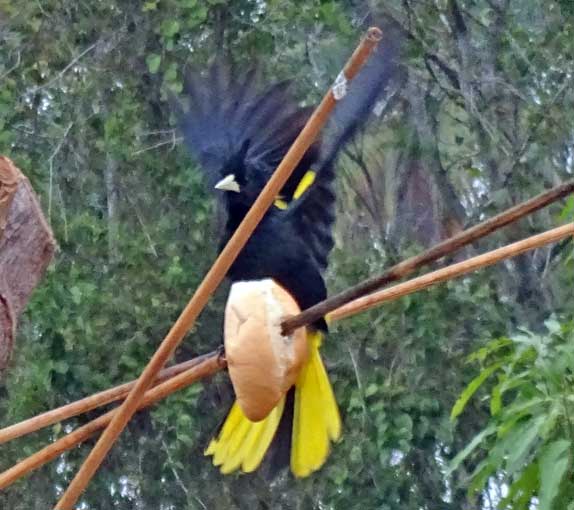 Early Thursday morning - the sun broke through a little. 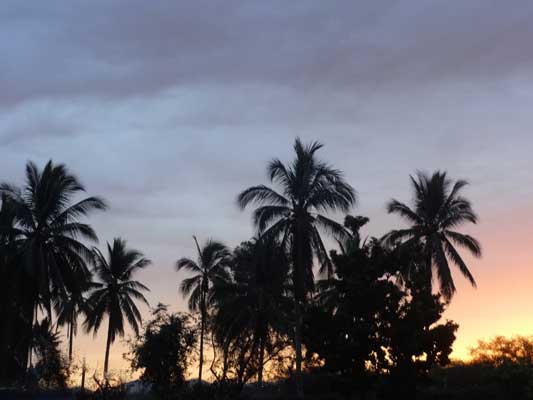 Looking outside later Thursday morning. a gray type of day. This was as we were getting ready to take a day trip. 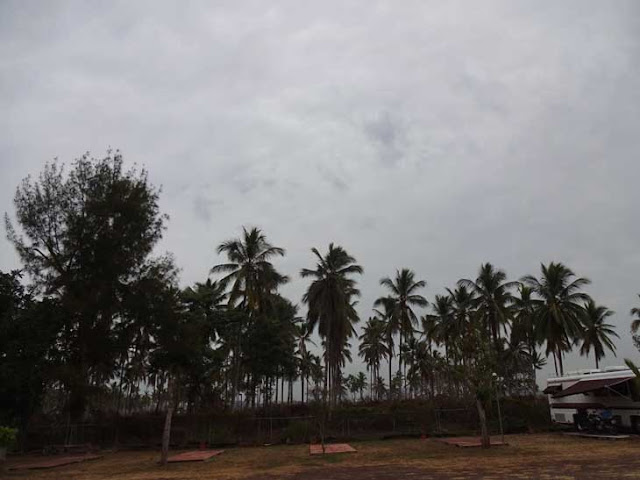 Took this yesterday, finally shows the cab matches the body color. It is a kind of cream color. Rather ugly. 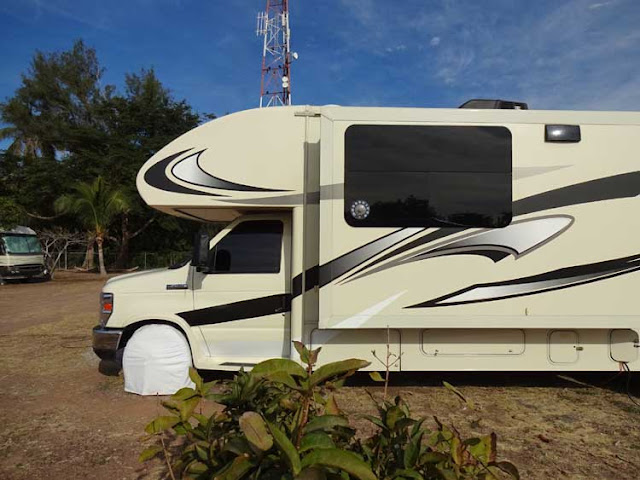 Our day trip was to El Quelite - yes I know - again. But you sure can't be in a down mood when you are there. We sat inside this time, as it was dripping a little. Sat at this table in fact. 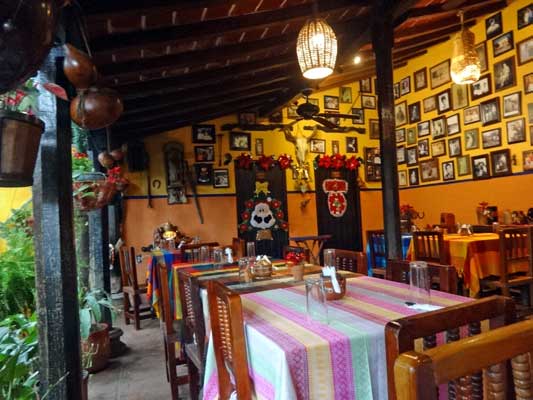 There were eight of us today. six captured tourists and us. Mike and Laurie had been here before the rest had not. Even with the rain everyone had a good time. I had the Mexican coffee - cafe de la holla - coffee steeped in pottery with brown sugar and cinnamon and orange peel. I always drink my coffee without cream or sugar but have developed a taste for this. 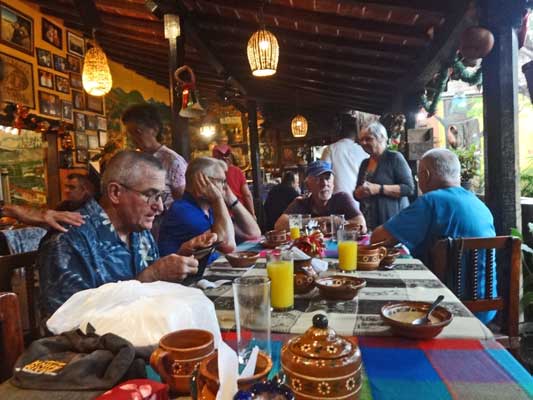 Playing with my old camera - one of the murals in the back room of the restaurant. 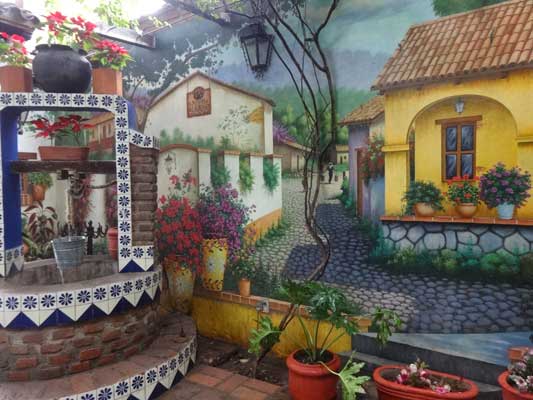 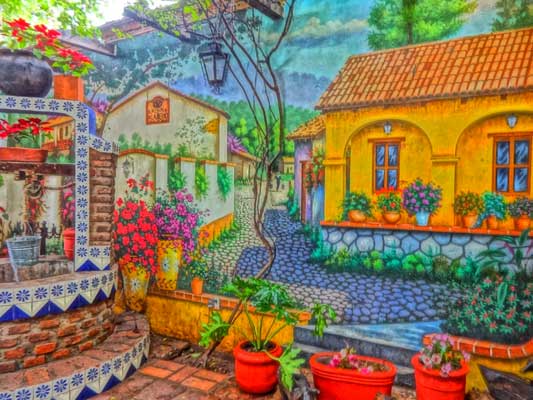 Looking outside the restaurant - all the ducks in a row. 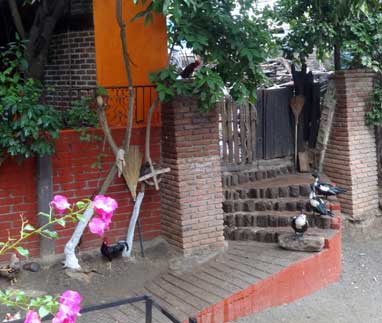 Just one of the walls inside. Every where you look there is something different. 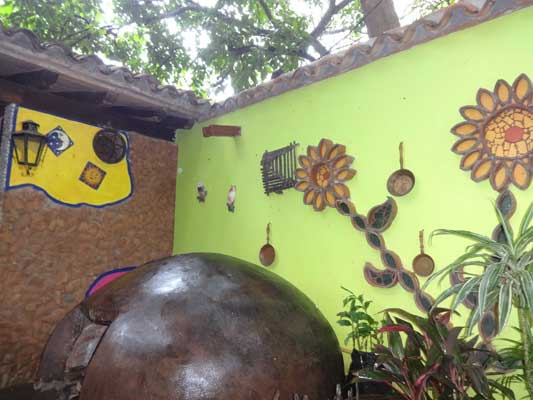 Looking at the other wall. There is no roof on this section just a jumble of vines. So not a whole lot of light coming in. Kind of interesting. 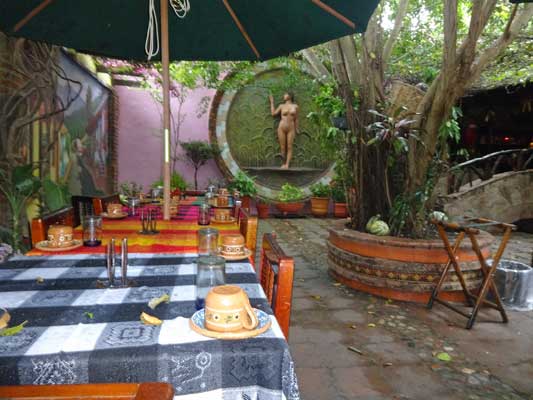 And yet another wall. It is such a great place to wander around. And I'm just talking about the restaurant. 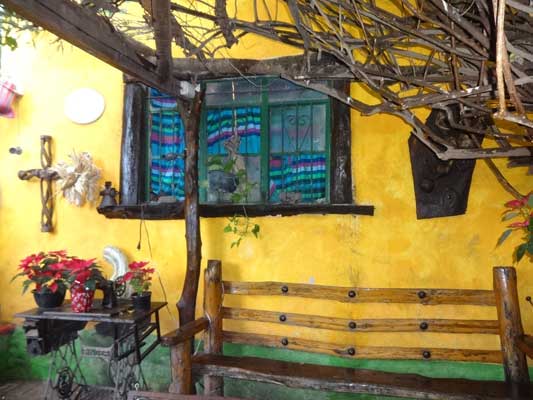 The rain was getting harder so we didn't stay much longer and didn't go around town at all.
So another week has almost passed. After I post this I'm going to work on the pictures of the children from Guadalupe Day. Because I'm sure not going to get any photos until this rain goes away.
Oh, another experiment with my old camera. Illustration mode. Interesting. 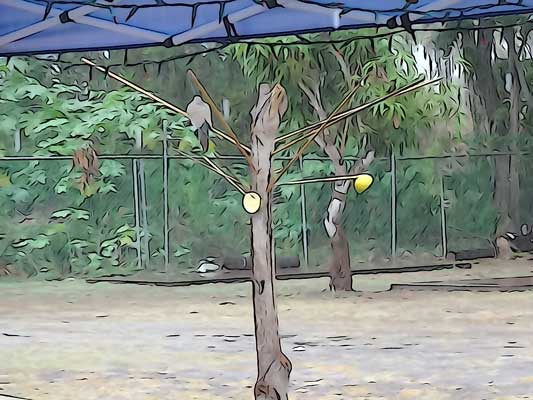 Now the rain has reached us along with some wind early this AM so just stayed in bed a little longer. Some vendors came to the beach before the rain stopped and when it did the beach umbrellas and people showed up and stayed until late afternoon when rain started again. Many in the ocean, too. Has been a cool evening and being the wimps we are Rex turned on the furnace so it would be warm to take our showers this evening. Hoping we both get some sun tomorrow although it will probably be Sunday but we can hope.

Are those black birds on the tablecloth great-tailed grackles? They look a little like them. Some people along the southern U.S. states call them the "parking lot" birds because they often hang out in parking lots, but I like them because they make such amazing noises--chirping, cheeping, whistling, squeaking, etc. I was along the Gulf Coast of Texas once during their mating season. (The males are black but the females are a soft brown.) The males did everything except cartwheels to attract the ladies, who mostly just ignored them. They danced, flapped their wings, bent over in a bow, etc. Very funny birds, if that is what they are. Great-tailed grackles have much longer legs and longer tails than regular grackles and are comedians. https://www.allaboutbirds.org/guide/Great-tailed_Grackle/id#

Another great post showing your adventures in Mazatlan. But I was surprised by your comment that Bill has been been in Spain. I can’t say I’ve read every post that you made, but I don’t remember you talking about a trip to Spain. Was this in the old days when Bill was playing soccer?

It finally stopped raining here - Friday was blue skies and warmer. Now evrything has to dry out. Smells really moldy outside.

I think that is what I was told they are. And they do make lots of different sounds. And they are smart. They come eat from our bread/fruit tree sometimes too.

He was there over 20 years ago. Wasn't posting then.

Hey, I think those Great Tailed grackles are the birds I heard one morning last year when I was staying at a Motel 6 and thought I was in the Amazon rain forest! So many different sounds from the birds in the tree right outside my door. Was too dark to really see them but they looked black. No one there seemed to know what they were but now I am pretty sure that is what they were.