It is pouring rain and has been all night. Not had banging rain, just nice steady leaf cleaning rain. Today's forecast was for cloudy, tomorrows for 100% chance of rain. Maybe I just don't know what day it is. Glad we were out and about yesterday and the painting on the RV was finished on Sunday.
Just some pictures I've taken the last couple of days while riding and walking around Mazatlan. Man on motorcycle with ladder. Guess you make do with what you have. 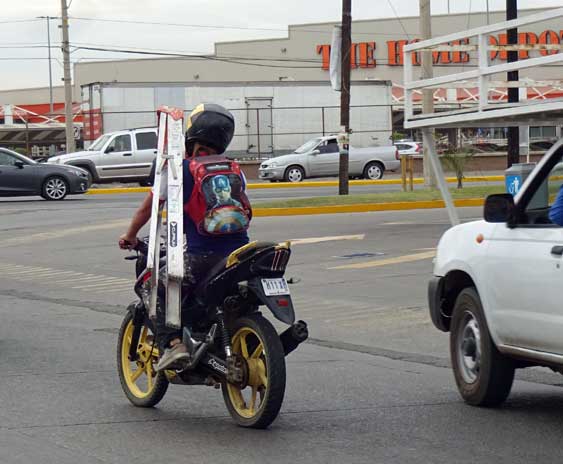 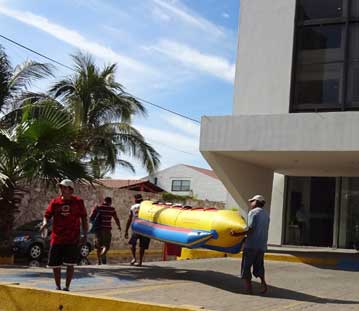 Stop and/or change lanes for the water truck. The trees and flowers around them were just planted. No automatic watering system. But I guess the guys on the truck have a steady job. Well except for today. 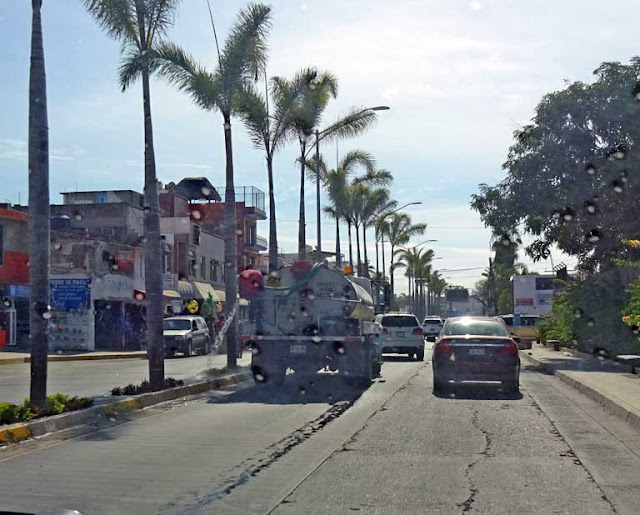 The geometric form waiting for its Styrofoam blocks to be put in. Hum...no work on the Malecon today. 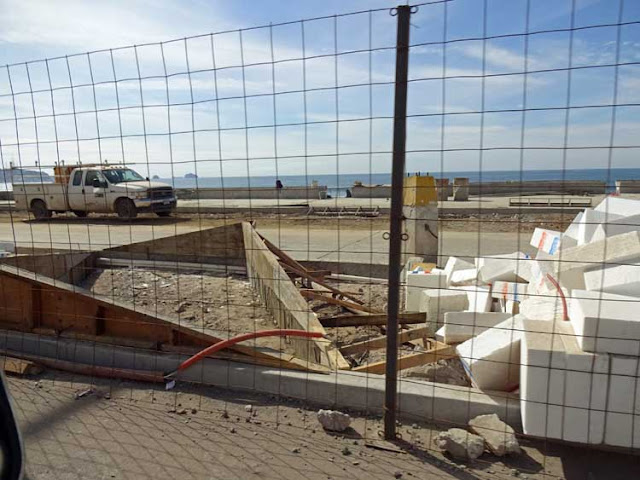 I guess he really marches to his own drummer. Amazing amount of sound he was putting out. 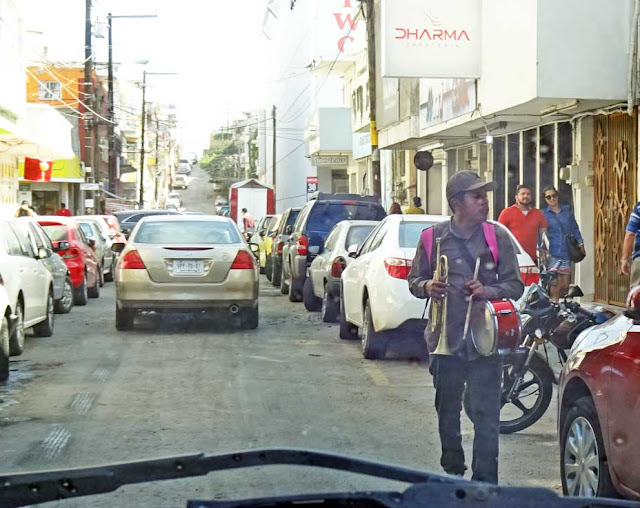 Waiting to be washed and parked. Bye Willie see you after your spa day. Guess we shouldn't have washed him yesterday. 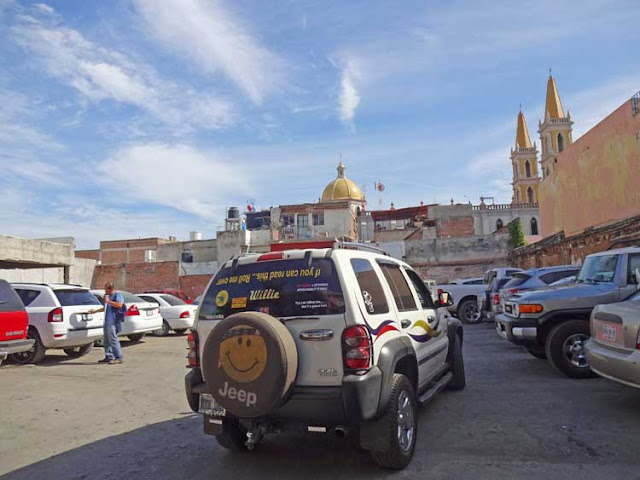 Just some of the colorful buildings with new paint jobs. 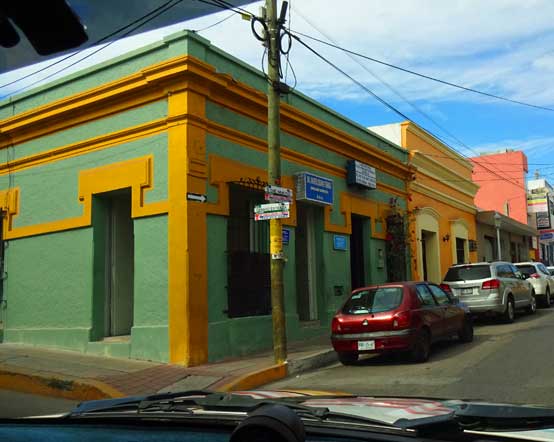 A boy and a girl. 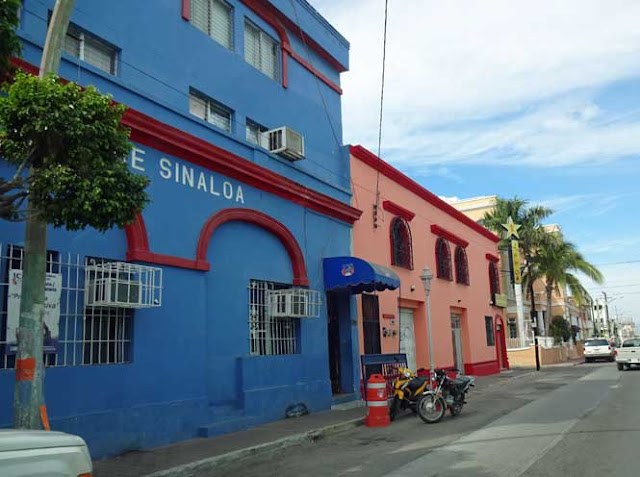 Umm...is that really the color you wanted? 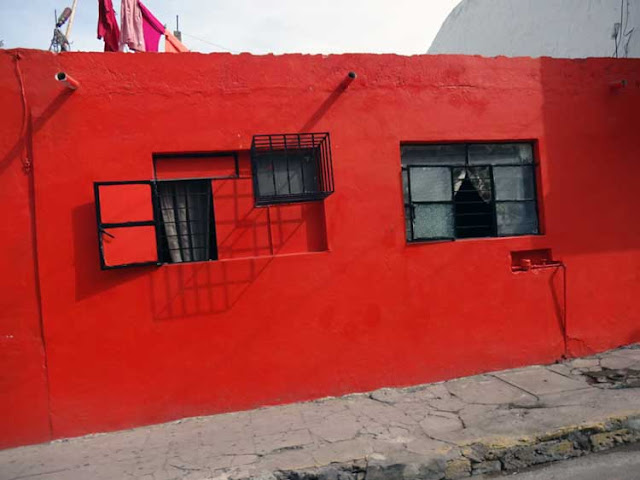 Finished painting the now closed parking lot. Could they have found a more noxious green? 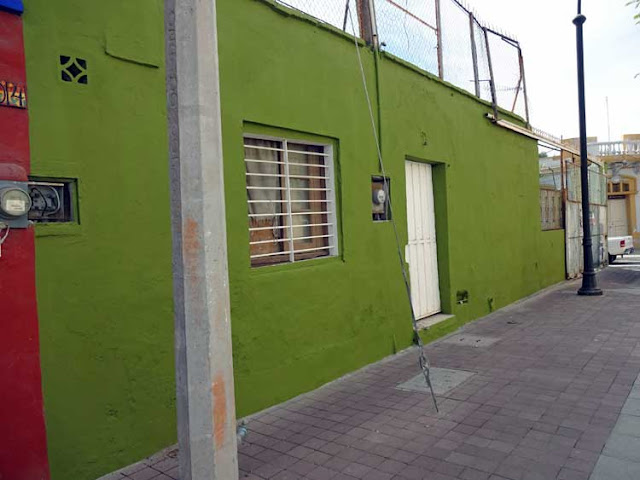 More and more of this under hang is finished every time we pass by on our way to the Plazuela Machado. Bill and the man doing it have some kind of running joke. We always stop and talk to him. 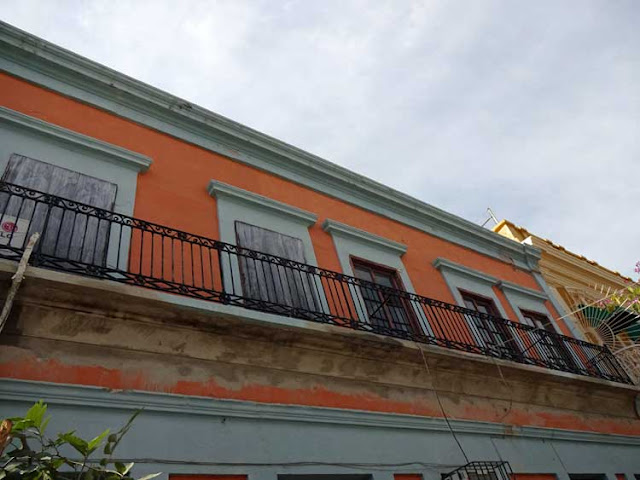 We stopped at the Machado Grill for cokes and to try to pay for our meal we had Saturday. Success today, well almost, Credit card machine wouldn't work but they could take cash. So that errand is taken care of. Only took three times. We watched the iguana watch us as we were sitting there. Haven't seen an iguana in the plaza before. 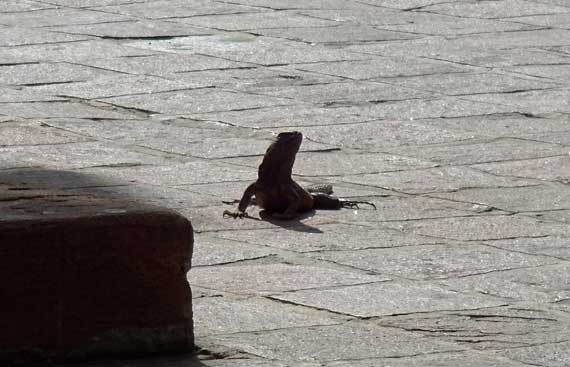 Walking past a pretty building that at one time was a Chinese bakery. 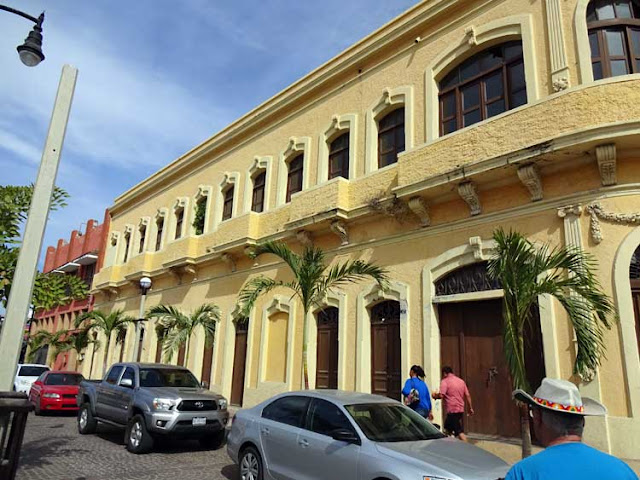 It is now empty and just a shell. Note the plant growing at the base of the door. It is such a pretty building. 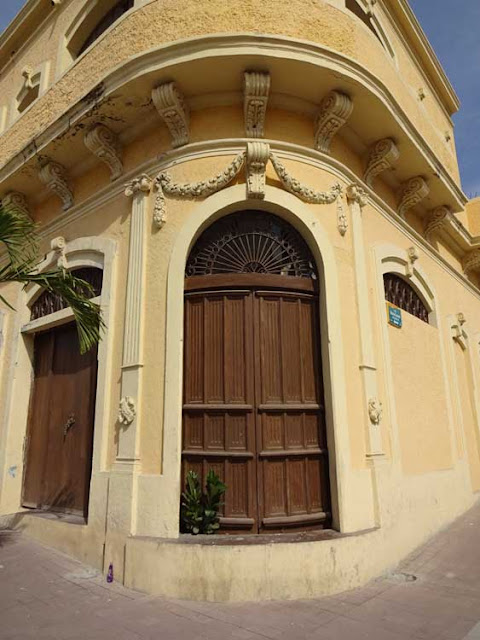 Talking to 'The General" he was the manager of the parking lot that is now closed, the lovely green one. Guess he is working at this lot now. Boy is that entrance narrow, we've only parked there once. I held my breath as we passed through the entrance. 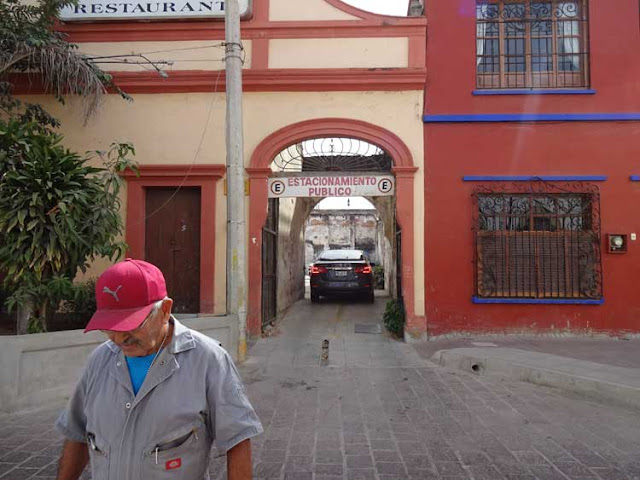 Buckets of clean water waiting for a car to wash. 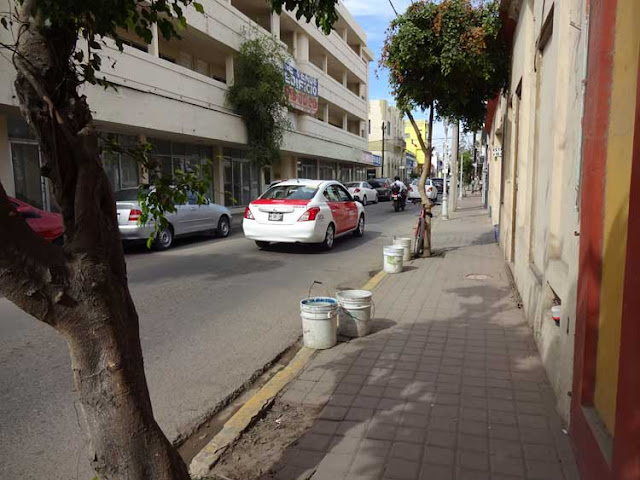 Willie in his very own spa room. Nice and clean and ready to go home. 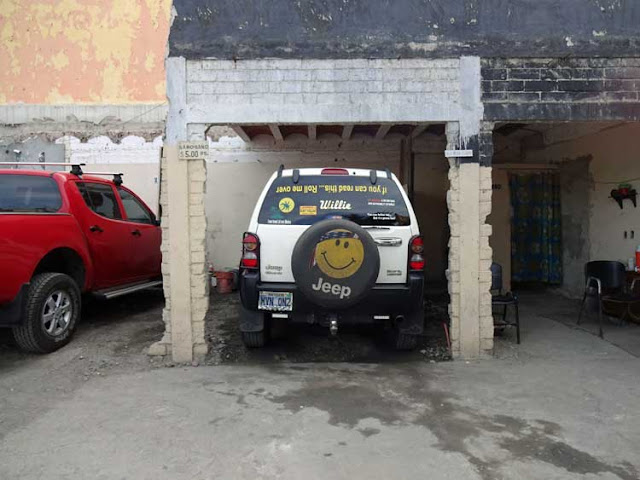 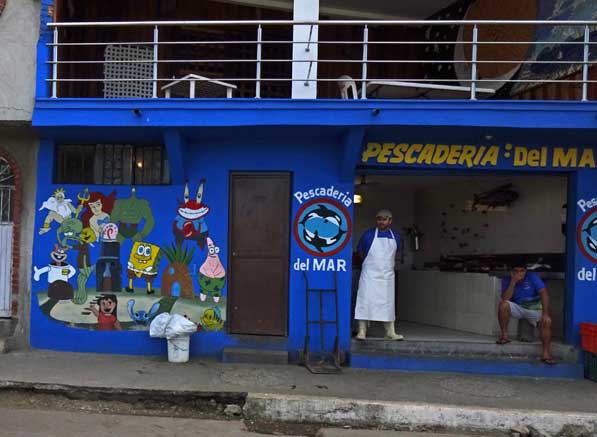 Okay guys, it is lunch time not siesta time. 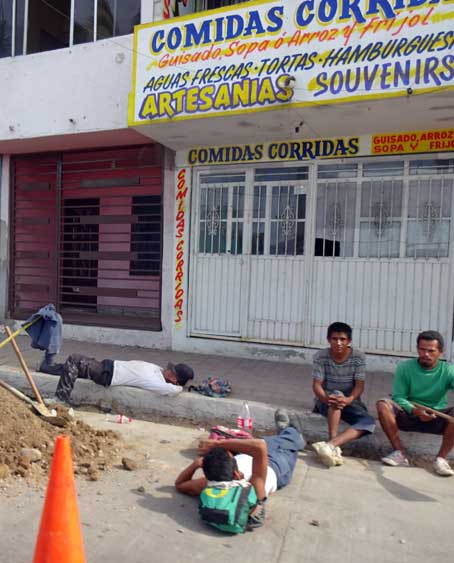 Could have a heck of a BBQ with this grill in front of the Weber Grill place. 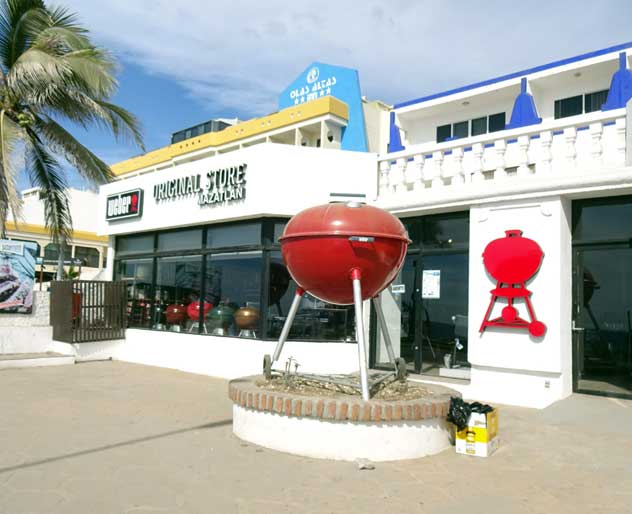 Driving down through the Golden Zone the driver has to be really paying attention. Shift right NOW. 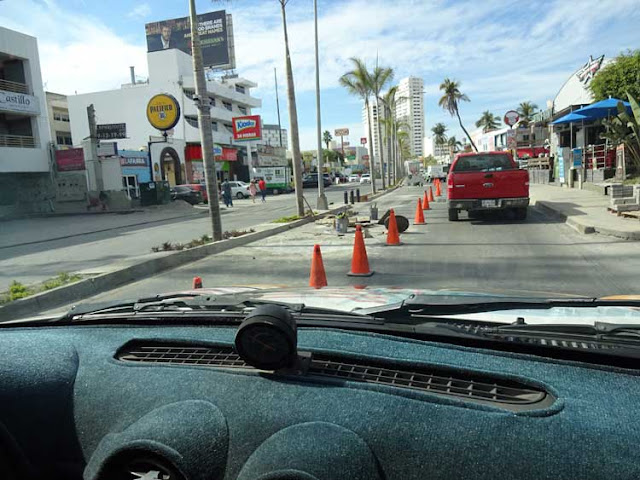 Oh Boy - go to the left  At least it is daytime. At night it is a guessing game as to where they are. No lights on them. 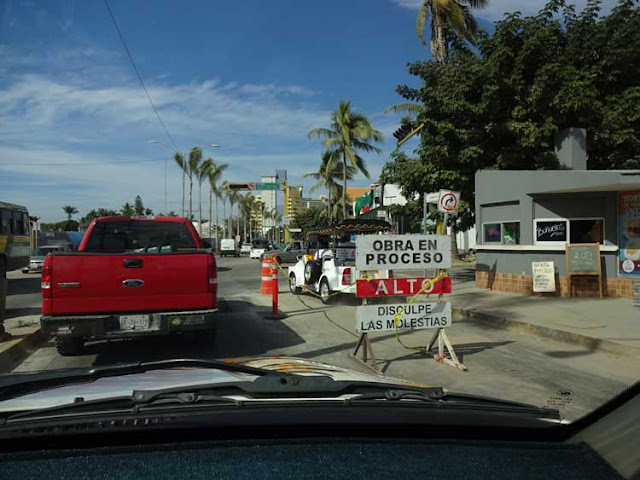 And another one - they are putting in tile crosswalks in this area. 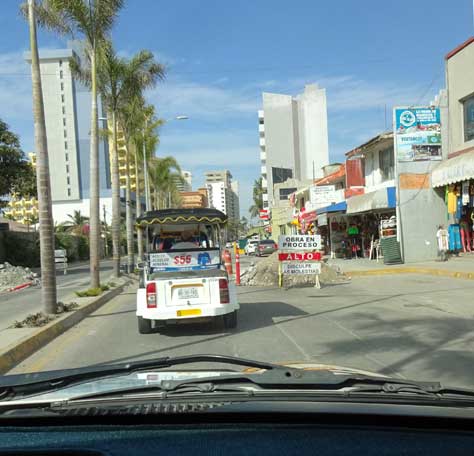 Quick to the right again. All within a couple of blocks. And I missed one. 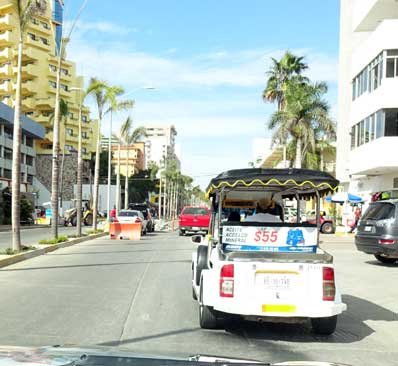 We were in Centro because it was The Virgin of Guadalupe day. The area around the main plaza and the Cathedral was packed with people and vendors. But I will save those pictures for another day.
It is forecast that we will be having a few days of rain - so that will be a good time to post. Just a tease 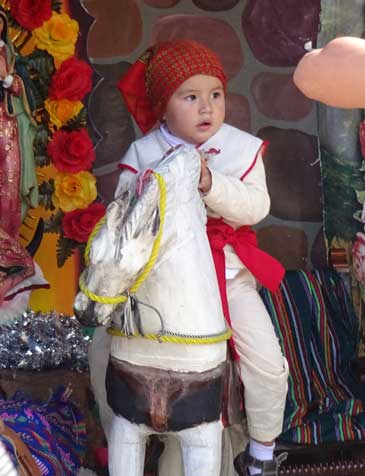 Glad I save those pictures. Probably not doing anything today to take pictures of.
Posted by Carol and Bill at 5:28 AM