Friday morning, it would be a good day to stay under the covers. Very gray and cloudy out. Bill is cold but I'm in a sleeveless t-shirt and fine. 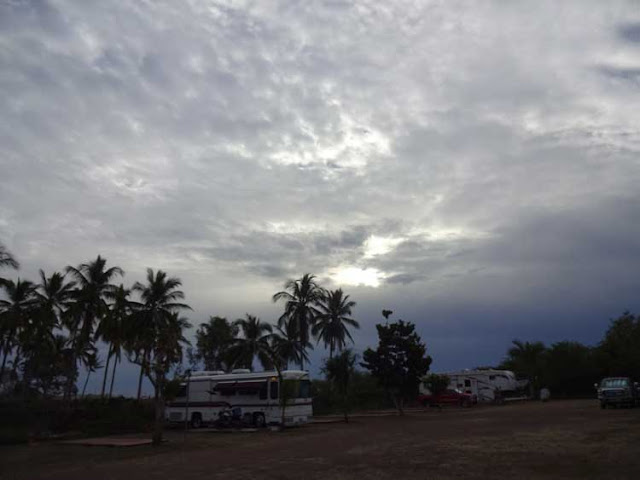 A day that I should try to cook something in the oven again, but still haven't found thermometer or a tile to control the heat. All the unglazed terracotta tile in Home Depot has a rubber/plastic type backing on it. I imagine it would burn off - stink. Don't know if it can be removed or not.
Just outside talking and a few drops of rain came down. And it has gotten much darker. 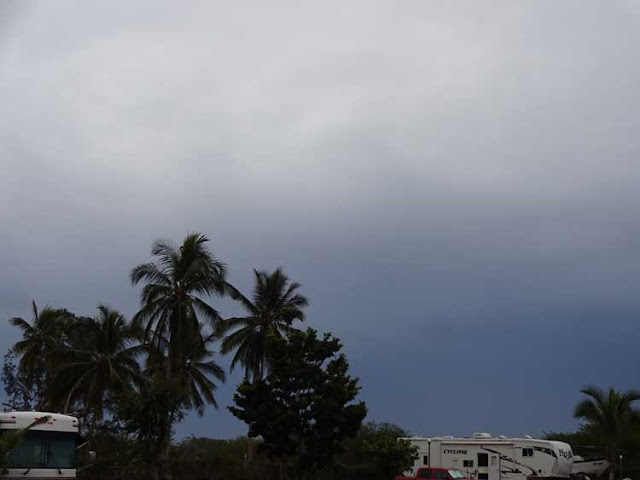 Been outside watching the construction/destruction going on next to us. Didn't realize the houses were so close to the RVpark. And we can even see clear across to the Convention Center with its beautiful mural. 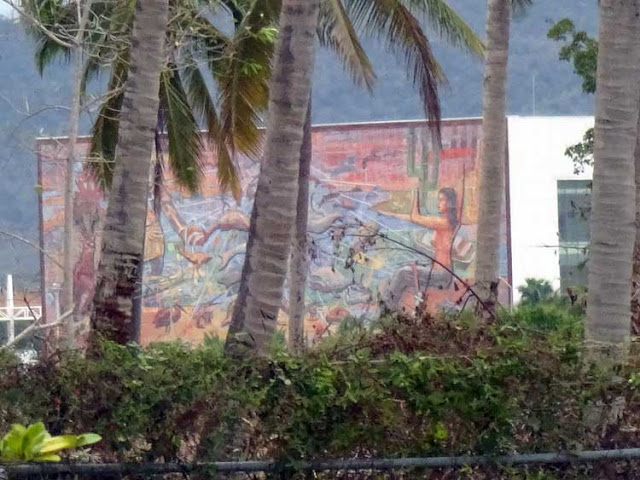 This area that has just been cleared out used to be a big RV park - name of Escondido. It went clear to the beach. When we started coming down here it was already closed. 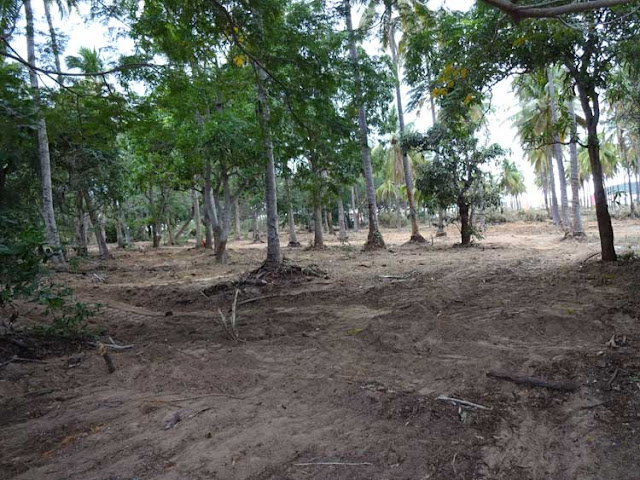 The bulldozer is clearing the dirt pile away from the fence today. 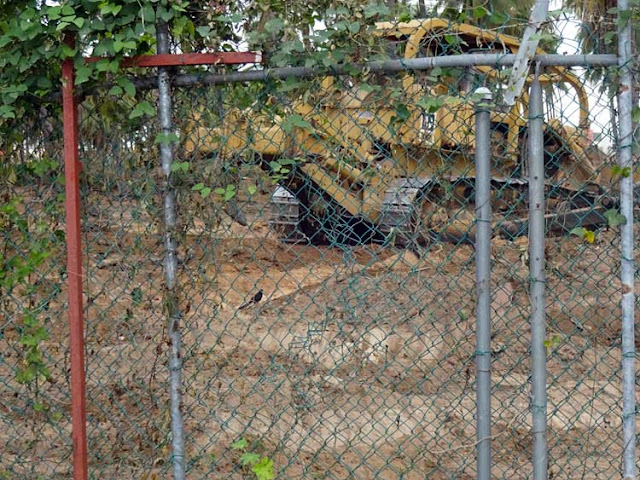 And he has a big following of birds. Guess there must be some good bugs etc in the turned dirt. 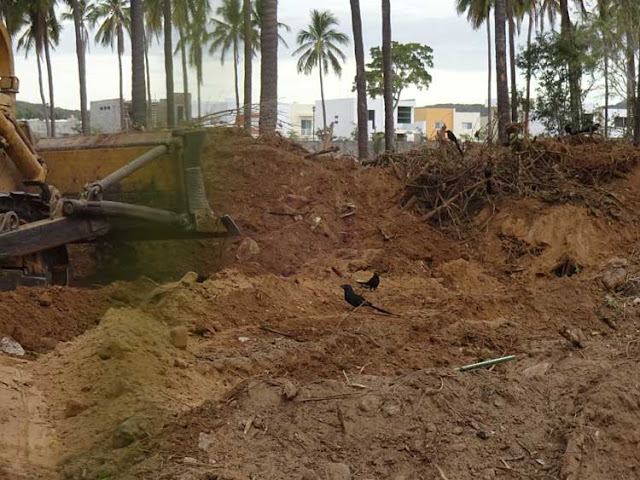 The mechanic is coming today to do some maintenance on the Jeep. He asked Bill to meet him across the street because the manager of the RV park charges him 200 Pesos to just come into the park. Bill was agreeable until it started to rain. So Bill called Pablo and asked him to come into the park and he would pay back the 200 Pesos. By the time they got here it had been raining kind of steady and hard. Luckily we have Willie's awning to work under. 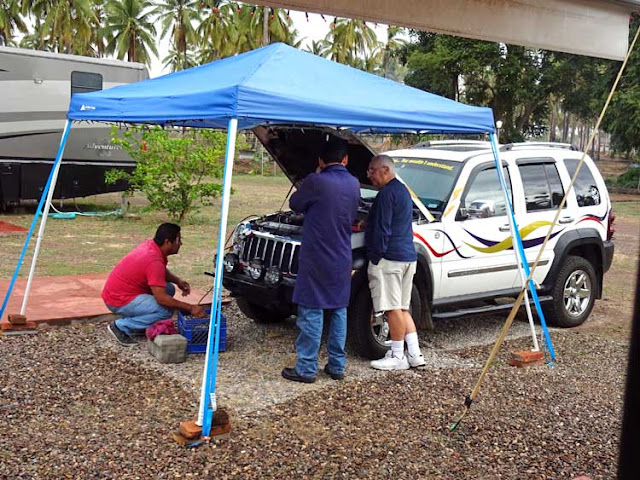 The sun came out about noon. And the mechanic left to get a new gasket. It is 4:00 and he isn't back. So the day has been spent in the RV doing not much of anything. Bill has been outside with another drone enthusiast. I'm so bored I even plan on cooking dinner.
Had an interesting thing to watch going on back where the brush has been cut down. There is an older Mexican man out there with a long bamboo pole cutting down coconuts. He has several lengths of bamboo tied or taped together to make the pole long enough to reach the coconuts. You can see him at the base of the tree. 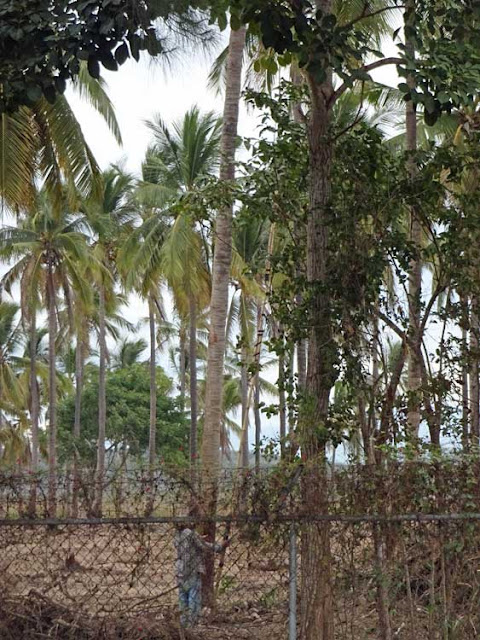 The pole bends and sways with the wind. Sometimes he can straighten it out. Other times it just falls to the ground 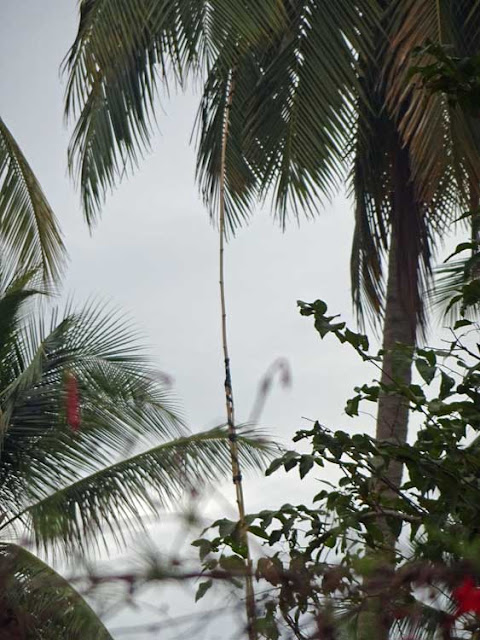 A closer look at the pole. The black around it is either tape or cord holding the two parts together. 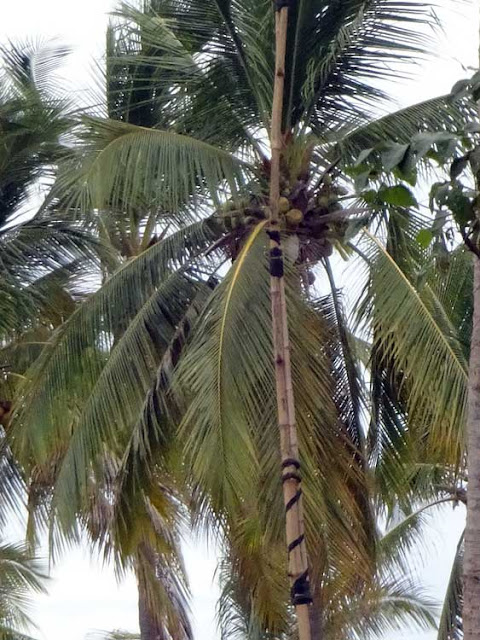 It is a very tall tree, the coconuts are way up there. 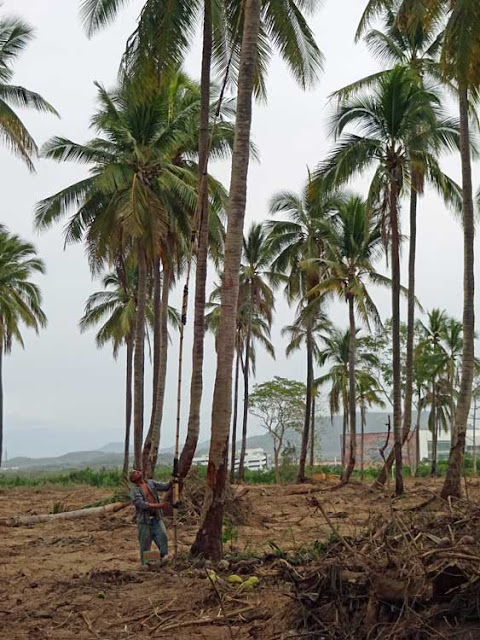 Doesn't quite reach high enough, going to stand on the bucket. A least the wind is barely blowing today. But it is raining. 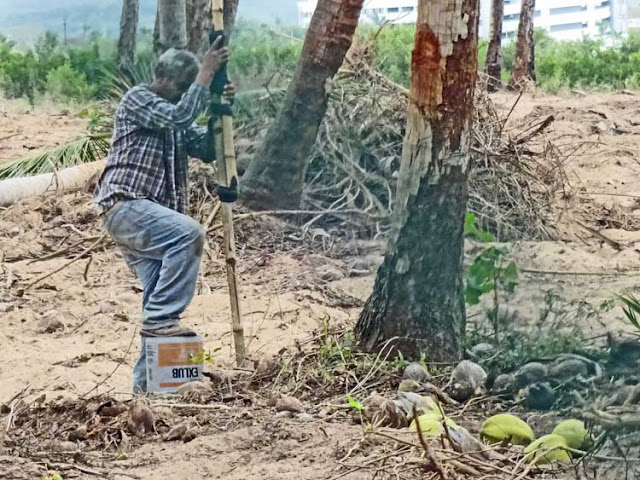 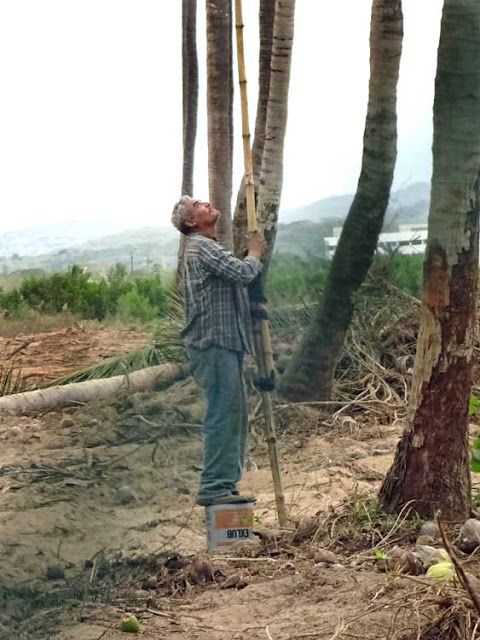 The pole is laying across a pile of brush, See how easily it bends. 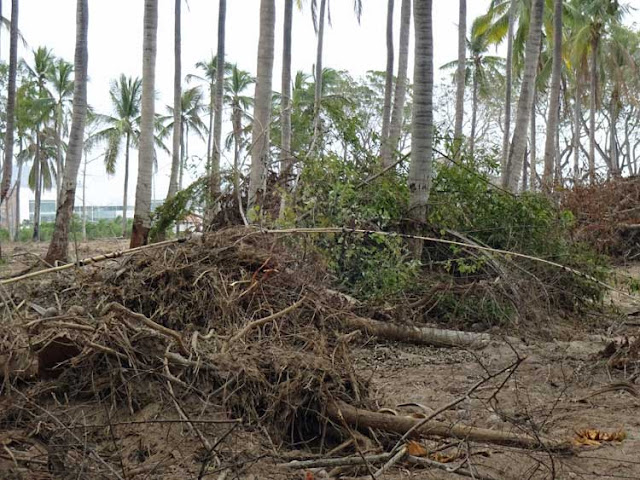 Notice the coconuts on the ground behind him. They came from that tree. Saw one coming down but couldn't catch a picture of it. 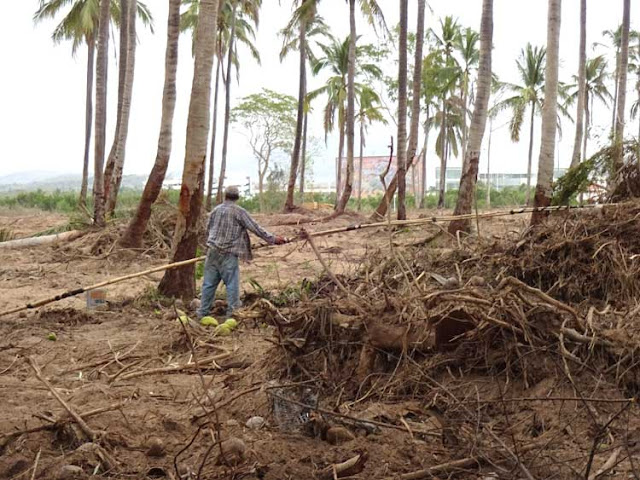 He has a blade on the business end. Looks like an old scythe. Yep that's what it is  "a tool used for cutting crops such as grass or wheat, with a long curved blade at the end of a long pole " 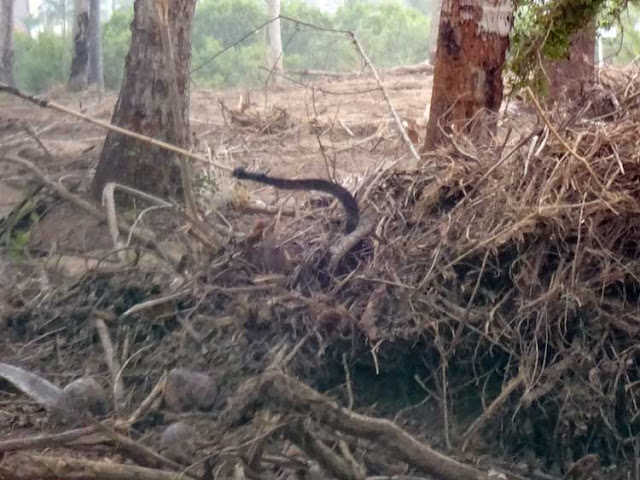 One of the dump truck rivers came over to him and bought? one of the coconuts. The harvester took his machete to it and cut off the top down to the milk. Enjoying fresh coconut milk. 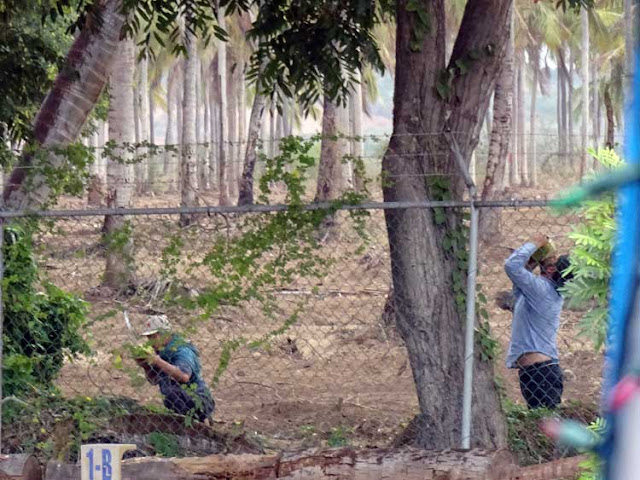 Hi Carol: I bought a pizza stone at Walmart for the bottom of my RV oven, it did help even things out a bit but what really fixed my problem was a cast iron pizza pan. I still use the pizza stone (I am afraid of breaking it so I have to remember to remove it and wrap it in a towel before we travel) but now I bake everything I can directly on the cast iron pizza pan, my cookies and biscuits come out perfect. If I am baking something in a dish I place the dish on the pizza pan. I have had such good luck with it that I even use one in my oven at home. I have also used it at home on our gas grill to bake pizza and other things. You can find them at Walmart.

I am a long time follower of your blog, always amazed of your and Bill's talents. Also love how you notice and point out all the beautiful things you come across in your travels. Much of what you notice I would simply pass by.

We are going to try one of the kitchen supply stores here in Mazatlan, but I imagine I will have to wait until we get back in the states to find anything. But it gives us an excuse to go the out of the way shopping section in town. Lots of interesting things to see there.
I love looking around for different things going on. Good thing I dont have to drive and can look instead
Thank you for your comment.