A walk on the beach and some drone video.

Yesterday morning we went to WalMart for a few things. One of them being vanilla. Every year I bring vanilla, baking soda, baking powder, cream of mushroom and celery soup. This year I didn't cause I always end up taking them home with us never used. Also bring walnuts, not this year. So now I am cooking more and have some bananas that I'm going to use to make banana bread. So needed to shop for a few things. We went early and it wasn't busy. Then home until we took a walk. [the bananas aren't quite ripe enough to make the bread yet.] I am glad I found a couple of small aluminum loaf pans at WalMart last week when I thought I'd have to be making gluten free bread.

We, yes both of us, went for a walk yesterday afternoon. Duration almost one hour. 5550 steps, two and one quarter miles. [Not including what we walked around WalMart.] It was a cool day, kind of gray to blue sky and a nice breeze Started out on the sidewalk walking north and turned to the ocean and came back along the beach. Noticed this chair at a construction site. It is missing one of the front legs. Someone figured out a way to make it usable. 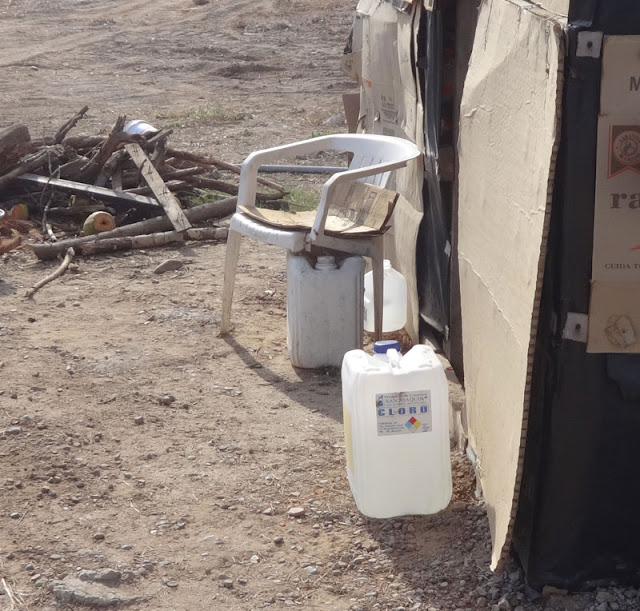 Just some pretty flowers along a wall. 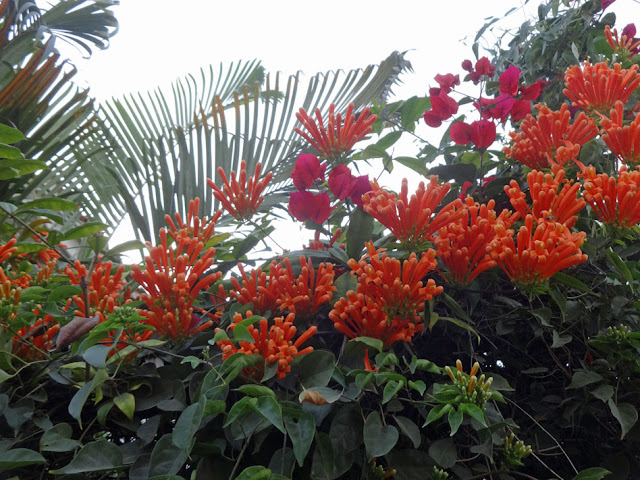 This wire caught our eye. Bill is standing right directly under it. He is about 5'8" the wire is barely a foot over his head. Hope no one taller tries to walk that way at night. 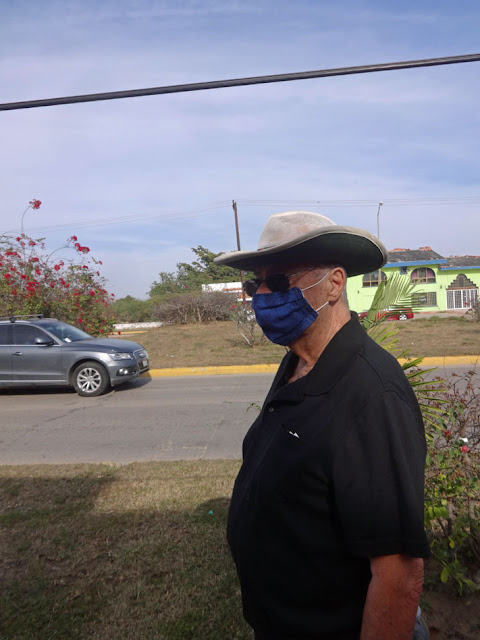 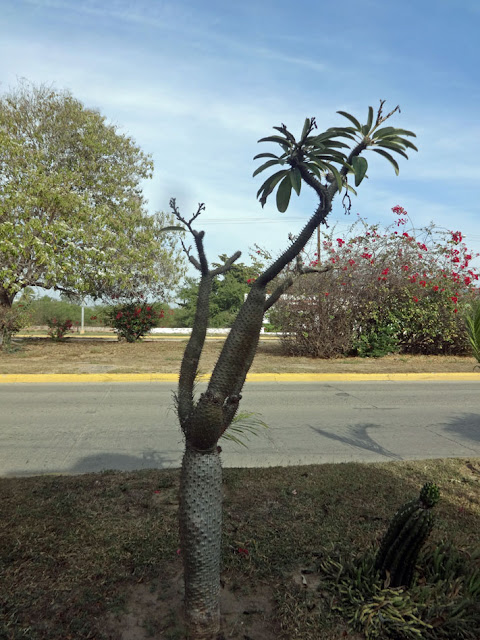 And a really pretty flower. The whole flower is only about one inch across. 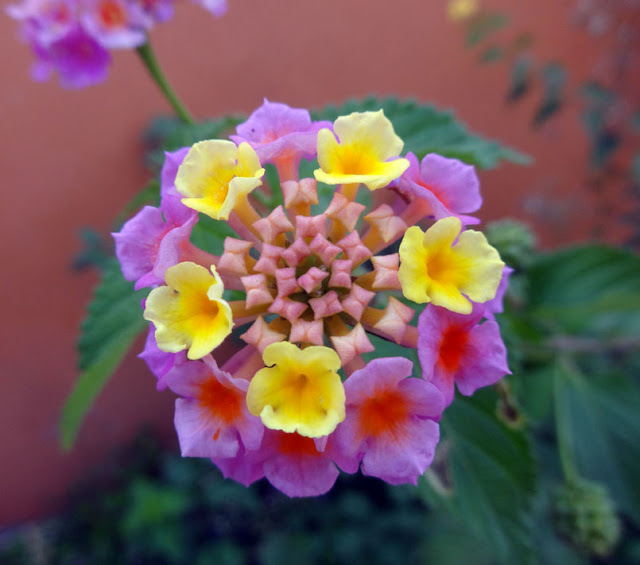 Heading down a side road towards the beach. European motorhome. Looks like it could take on anything. 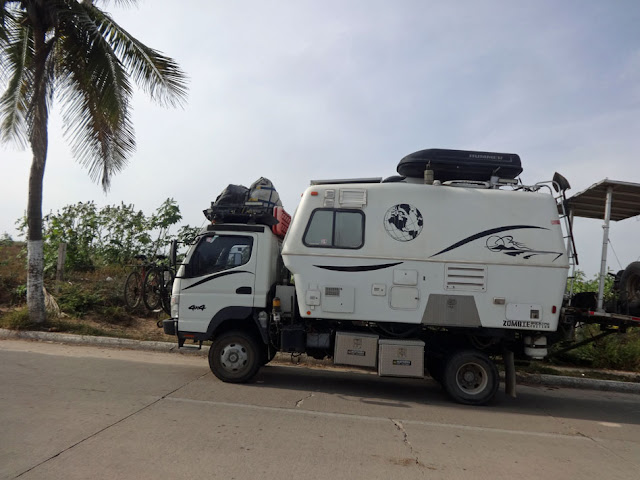 To the beach. It was pretty hazy, not a pretty day. This is looking north. More people then normal on the beach as yesterday was part of a three day weekend - Constitution Day being celebrated a few days early to get the long weekend. Lots of cars from Durango along the road. 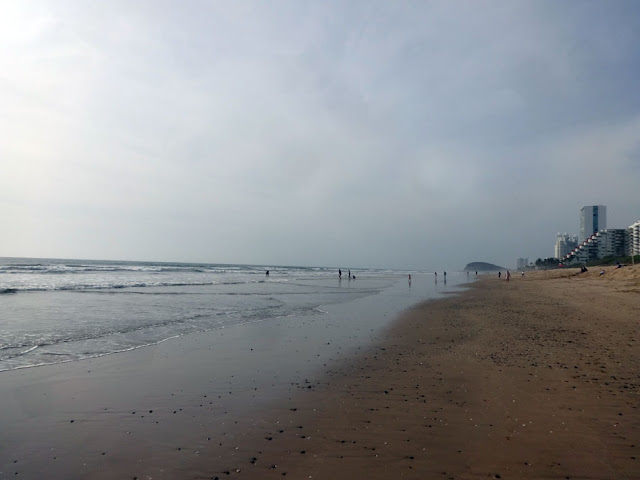 Tide was coming in but there was still enough hard sand to walk on. Bill ahead of me heads south on beach. The RV park is across the street from the tall skinny building. 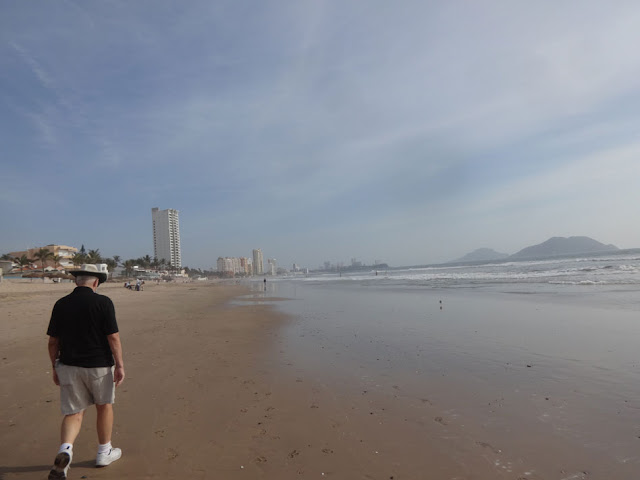 He was busy picking the sand looking for yummies. 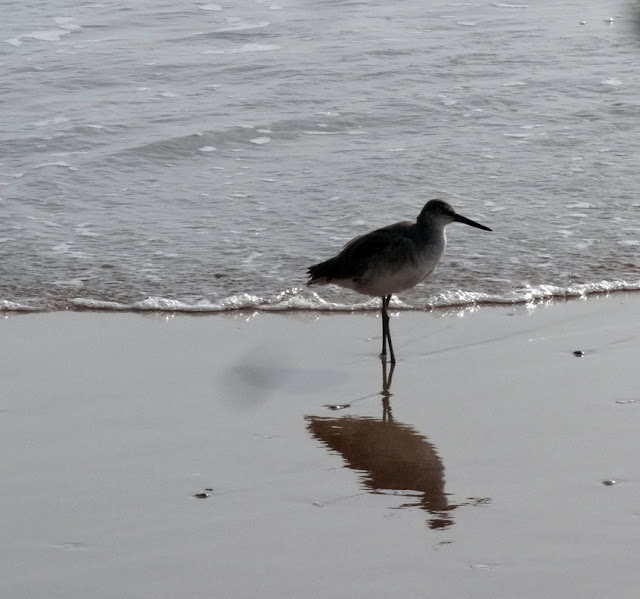 More people on the beach and in the water. Just above the two people on the left is the Torres hotel where we always go to eat. The little pink building.

He was digging for something - clams maybe? He found some of what ever it was. Puts them in the blue sack he carries. 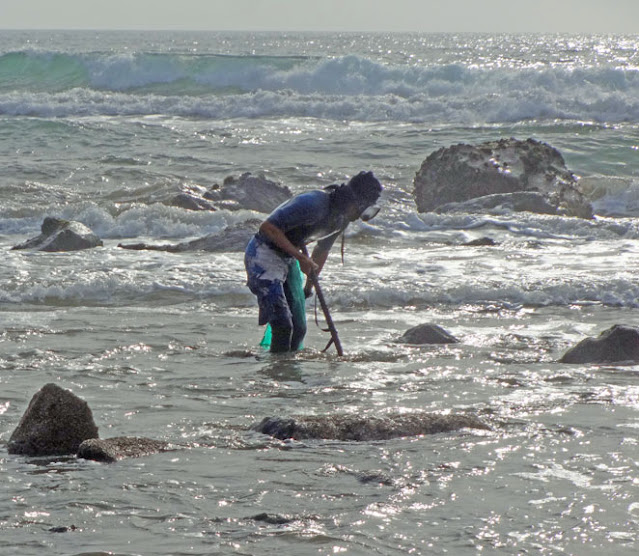 The tide was out quite a ways. These are weed covered rocks. 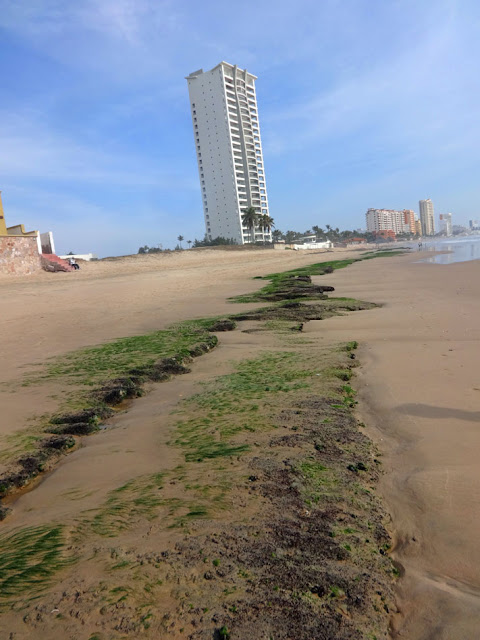 Some of the living things attached to the rocks. 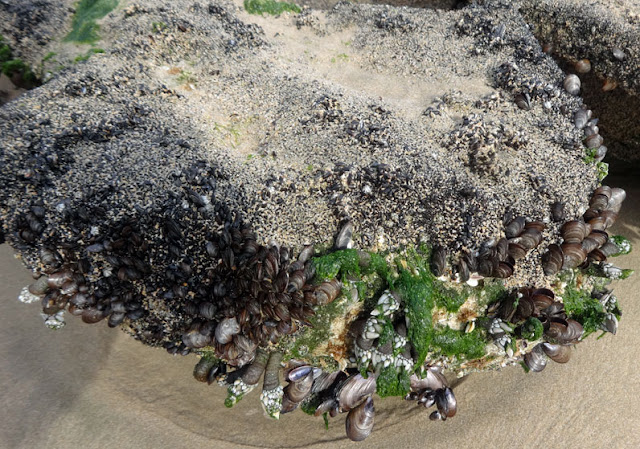 These rocks with the water between them remind me of mountain ranges with a lake if seen from an airplane. 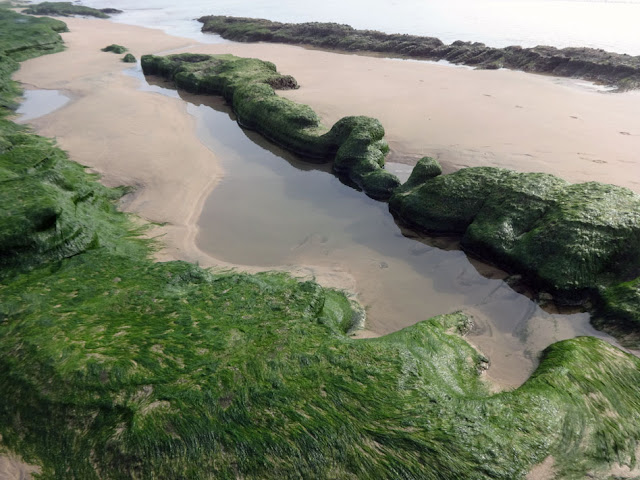 Just patterns in the sand and a couple of little footprints. 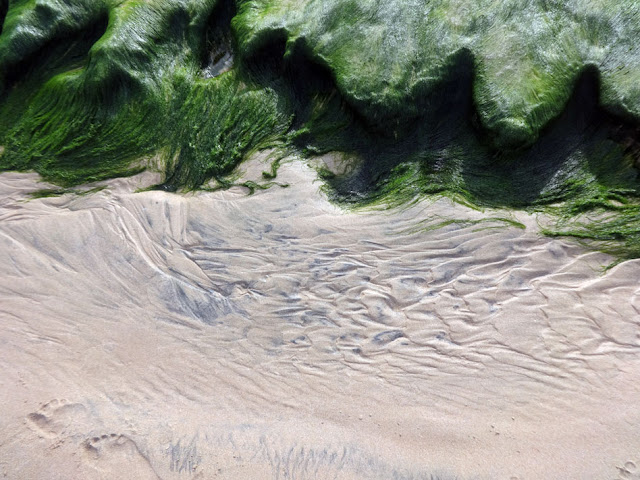 Most of the sand has been washed away. It used to be level with the bottom of the top rock wall. 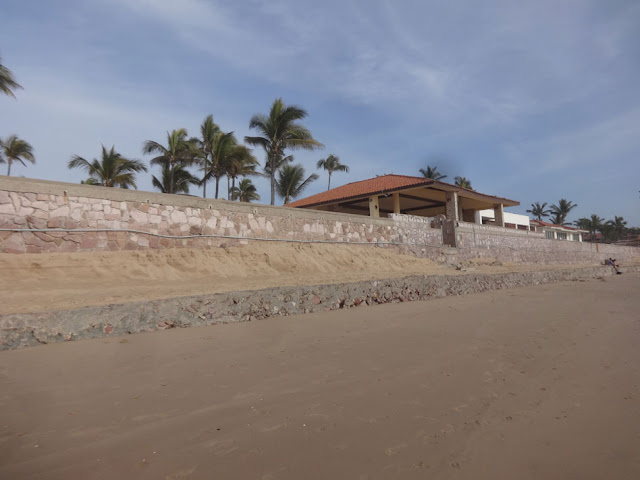 A small restaurant. A few years ago he just had a small food cart. Now there are even tables and chairs. 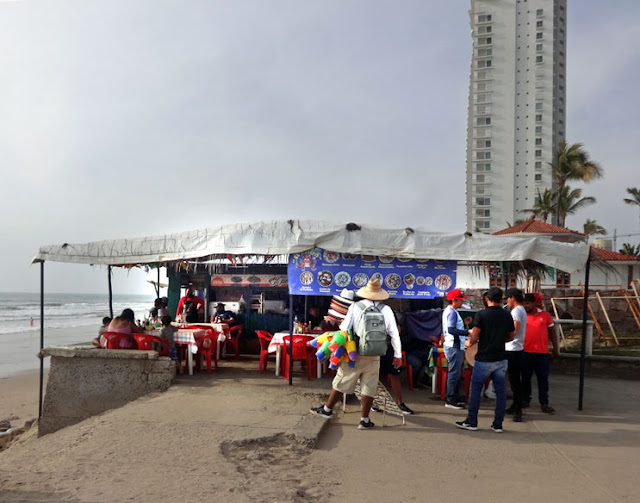 Looking out towards the ocean. All of these rocks used to be covered with a lot of sand. It is kind of slip and slide to get down there. 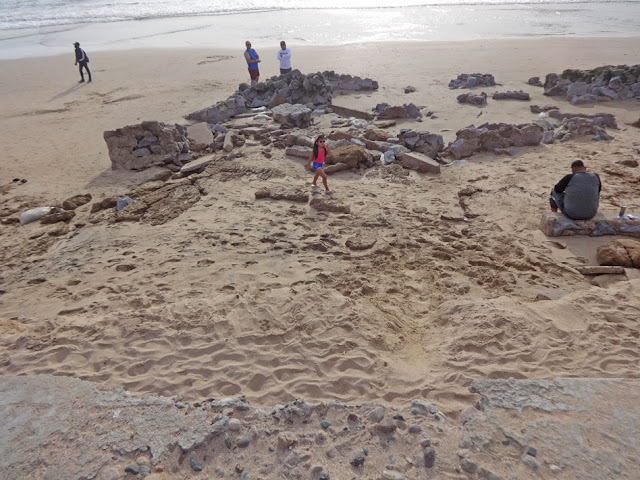 We went home then came back in the car with the drone. Bill with his favorite drone. Getting ready to take it up. 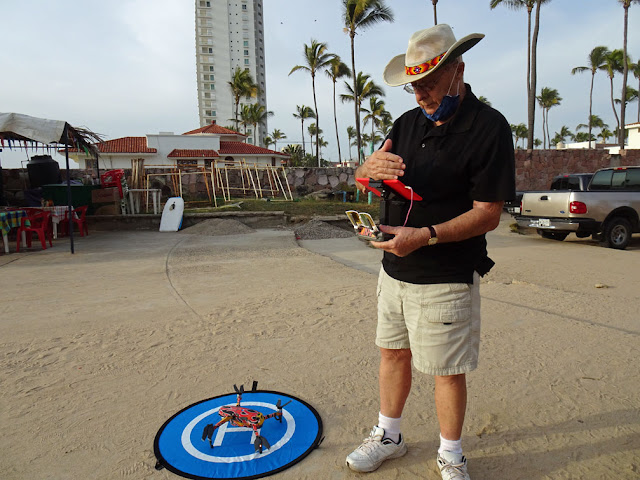 Watching the take off. 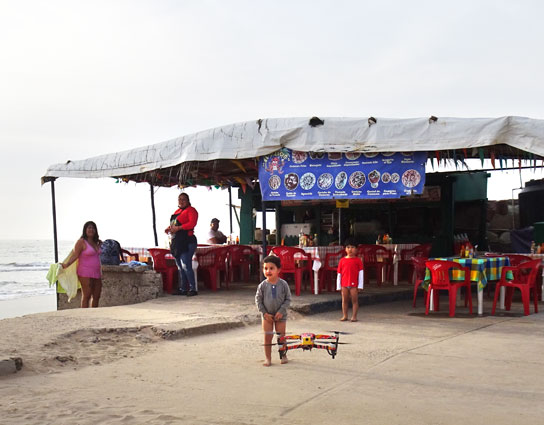 Running away from it. 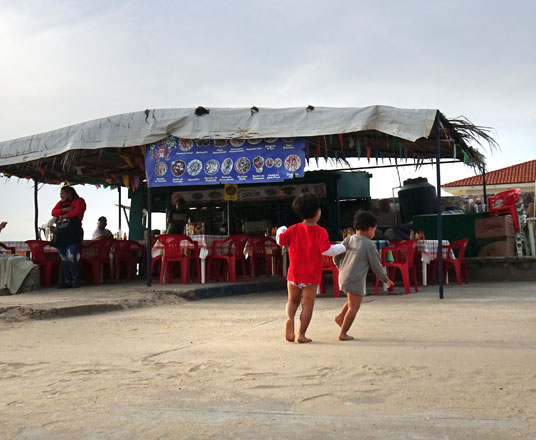 The videos he took. First one is looking south and getting a good look at the Torres time share hotel. Very pretty place. Not sure how high he went, but it was pretty windy up there. There is music with the videos.
More of the same and looking at the ocean too.
These little boys were fascinated by the drone. 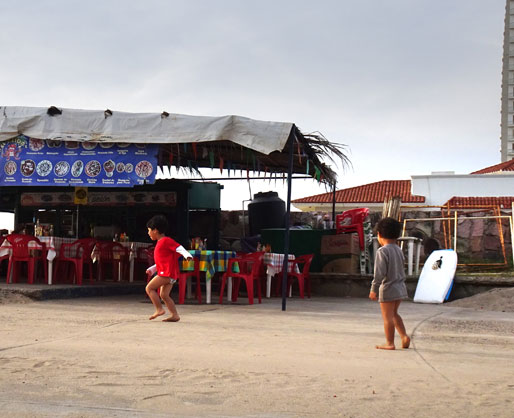 It was about four thirty when we left the beach. We didn't think it was worth waiting there as it didn't look like there'd be a nice sunset. Guess we were wrong. Turned out kind of pretty. These were taken from the RV park. 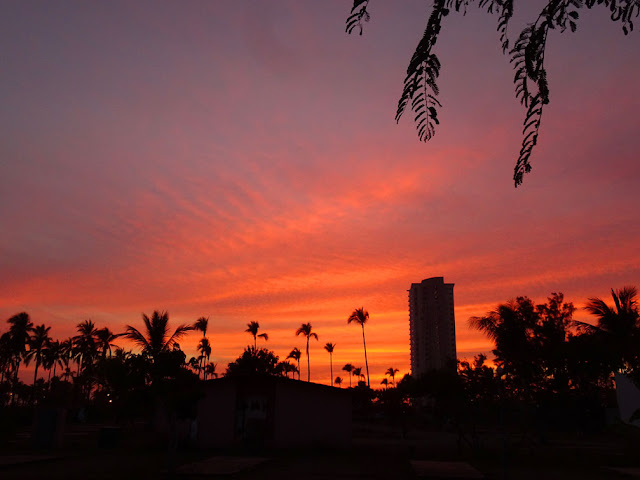 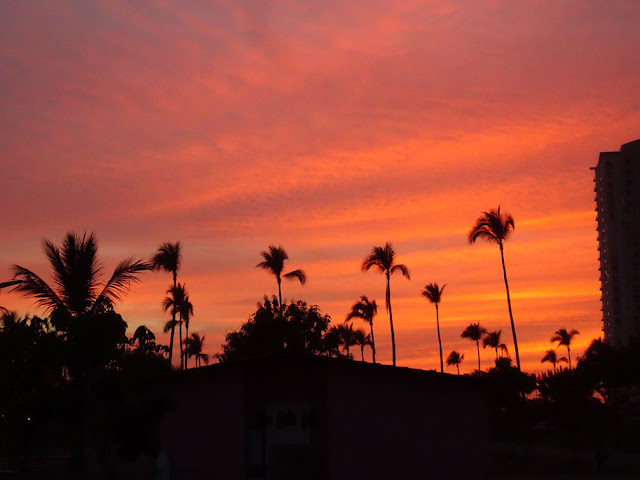 Didn't cook dinner last night, but might tonight. And the end of another day.
Hum...maybe have over done it. Needed an Aleve this morning.
Posted by Carol and Bill at 11:15 AM

Cactus are not in bloom in Southern Arizona, or anywhere else near here. I miss the blooms, but guess I am a little too early this year. Maybe the rain will speed them up! So nice to see the beautiful blooms in Mexico.

Congratulations on getting 5500 steps!!

Your pretty little flower looks the same as a primrose bloom. Nice to see your perspective of the beach. It's been great for walking this winter.

I'm thinking that the little RV is a small style flatbed with what looks like about a 15'-17' Bigfoot trailer, wheels removed, set on it. Pretty ingenious!


The tall cactus here are blooming, but can't get a good picture of them when moving.
Ruth - thanks, but compared to you, I hardly do anything.
Kathy - it has been nice for walking,k I just need to do a little more of it.
Nancy - the ones from Europe all look kind of like that. Look like they could go off roading any where.