Picked up my cameras and stopped in Olas Altas with the drone.

Sunday we didn't do much of any thing. Just went to WalMart in the morning and read, napped and watched some TV the rest of the day. And I worked on some stuff for the blogs.

Early Saturday morning we got a call from the camera repair man - my cameras were ready. So we jumped in the Jeep and drove across town to pick them up. Glad it was early as there is a big baseball series playoff thing going on in town and there are nationals here from all over the country and Latin America. At least when we left there was very little traffic. The days continue to be quite cool and humid. Lots of mist and haze in the air. 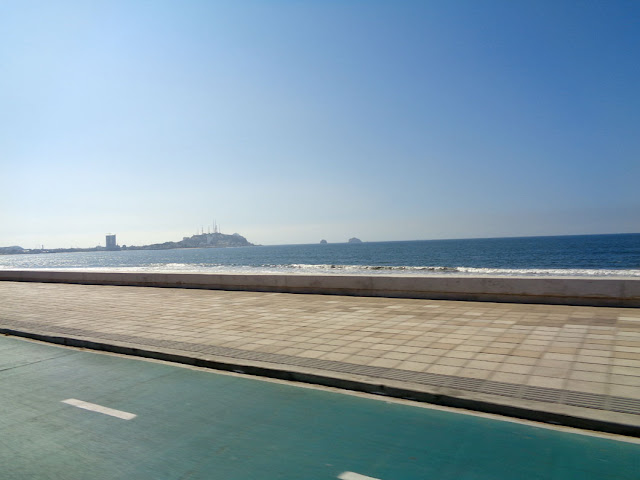 A whole lot of vendors were setting up along the Malecon in hopes of having a good day. 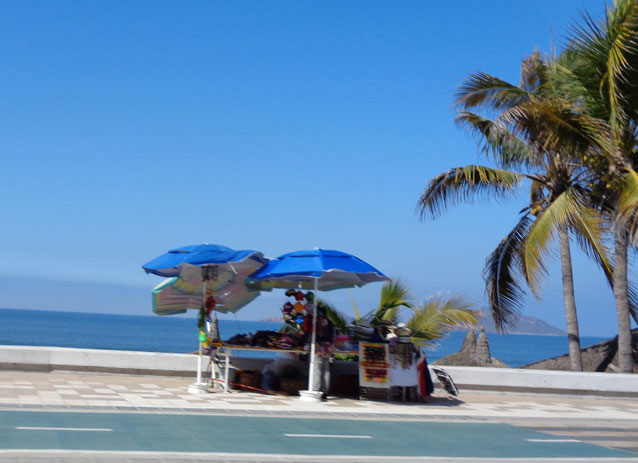 Father and son carrying white plastic chairs, the father had the seats and the son was carrying the legs. 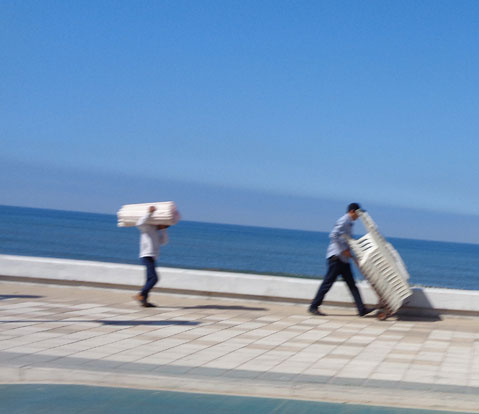 Never noticed the wings painted on this building before. Managed to just get a picture of them. 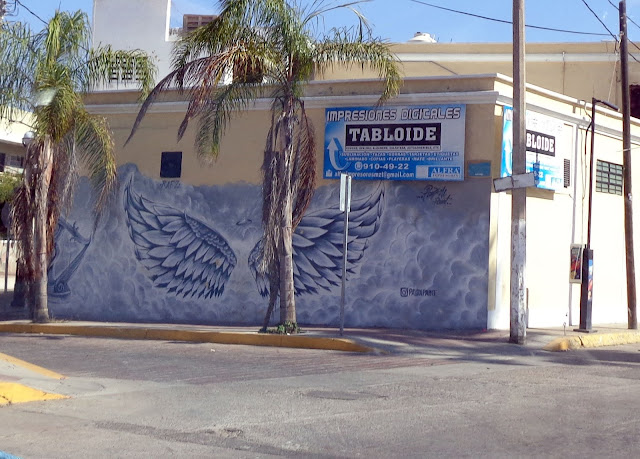 The home of the camera repairman. He said he cleaned the lens on both cameras really well. And the problem with my newest camera with it shutting off when I use the zoom. He couldn't really fix. Said he did work on it and hopefully it will stop doing the shut off. But there is a part screwed up and to order the part and have it sent here will cost more then buying a new camera. So will see what happens with it. 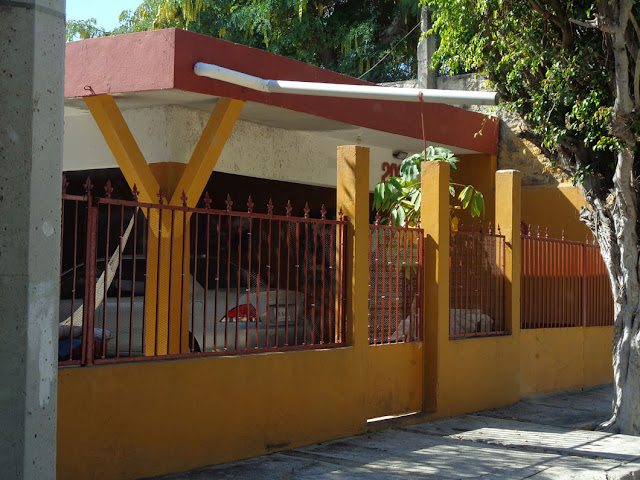 Another new street for us to drive down. Looks like a restaurant. 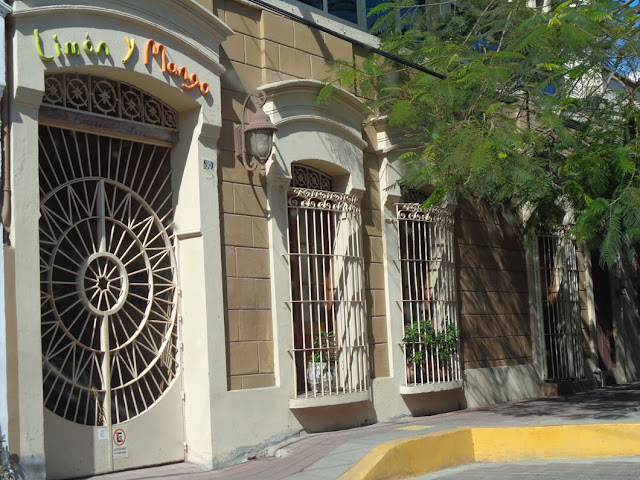 Took this just for the colorful buildings. 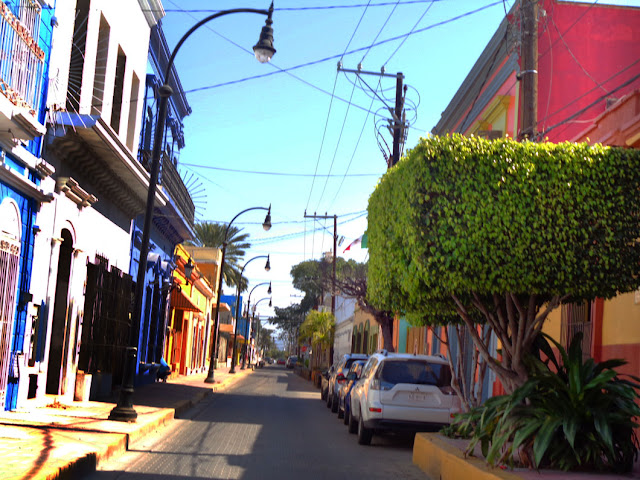 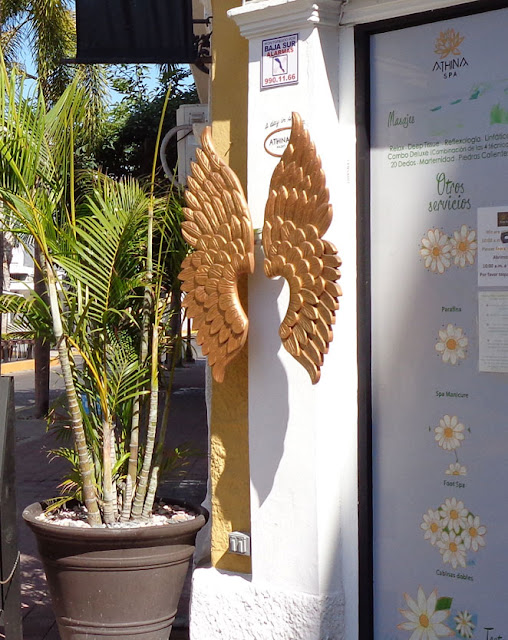 I really like these kind of gray green palm trees. They look so pretty. 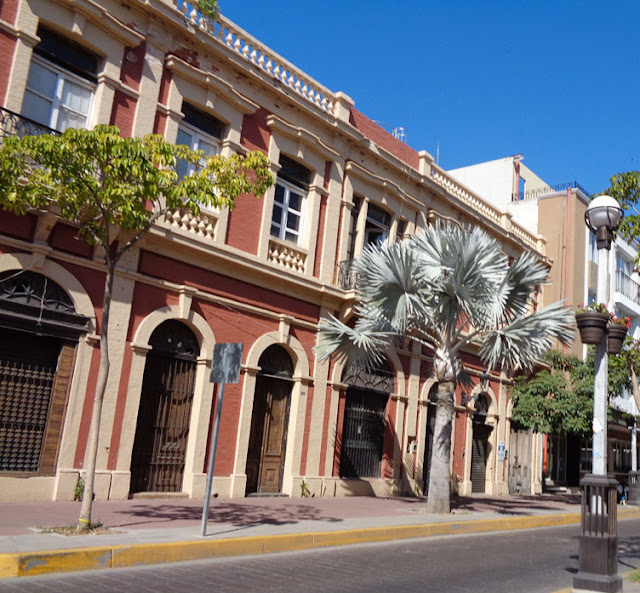 Another pretty tree. One of the reasons we are in Mazatlan. The trees and flowers growing here are amazing. Besides the weather is better then at home. And always something pretty to see. 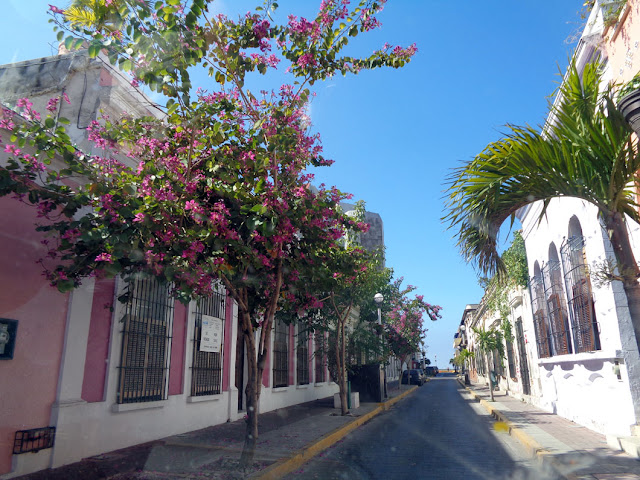 A Thrifty Ice Cream store in Olas Altas. I remember when we would always get a cone when we went into a Thrifty drug store when the kids were little. Are there any Thrifty Drug stores in the US any more and does Thrifty have ice cream stores there: 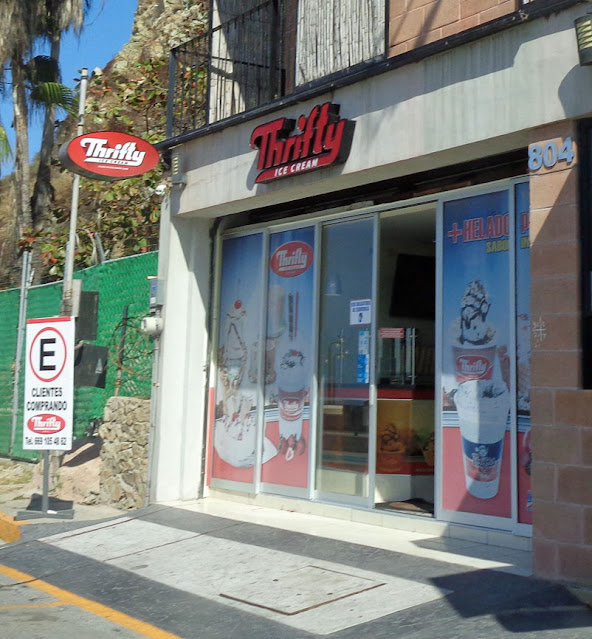 Much to our surprise there was a parking space on the Malecon right near the ocean fed swimming pool. So Bill made a U and we parked. There is very seldom any parking in Olas Altas, this section of old Mazatlan. A vendor walking by. He sure was loaded down. Two back packs, one in front, another in back. A load of hats on his head and holding some too. Also a big board holding sunglasses on a harness over his shoulder. And a slew of caps on the other shoulder. 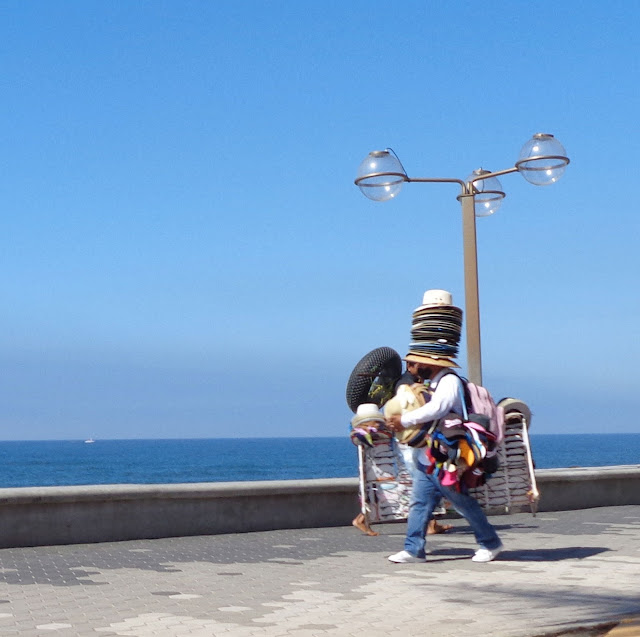 Looking down on Carpe Olivera - the name of the ocean fed pool. Unfortunately the tide was out and the waves weren't splashing into the pool. 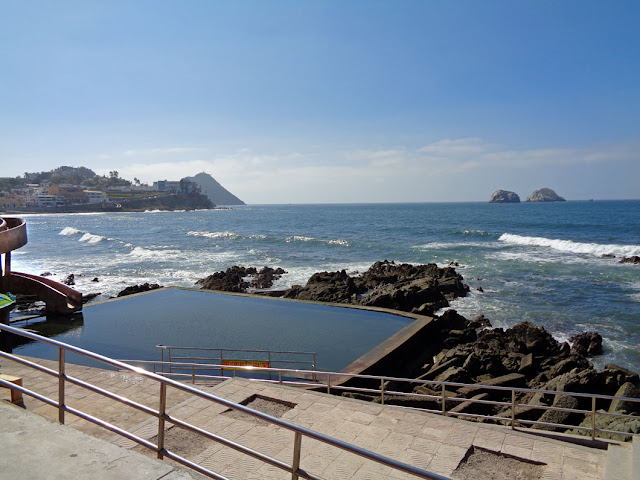 The inner tube laying on the sidewalk belongs to an oyster fisherman. It has a net in the middle of it to put the oysters and he has an instrument to free the oysters. 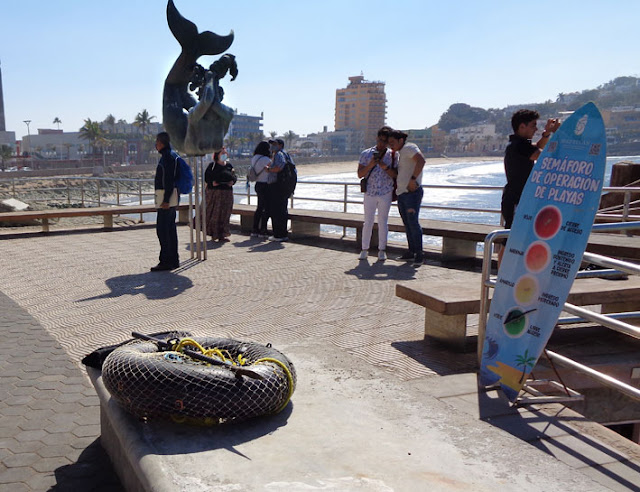 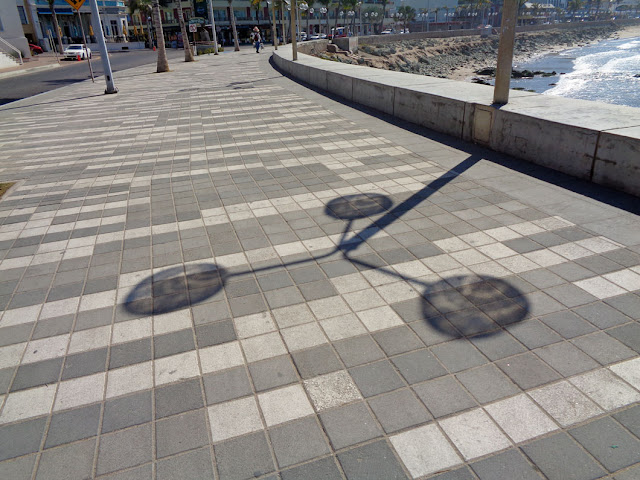 Looking at the line of lamp posts along the Malecon in Olas Altas. 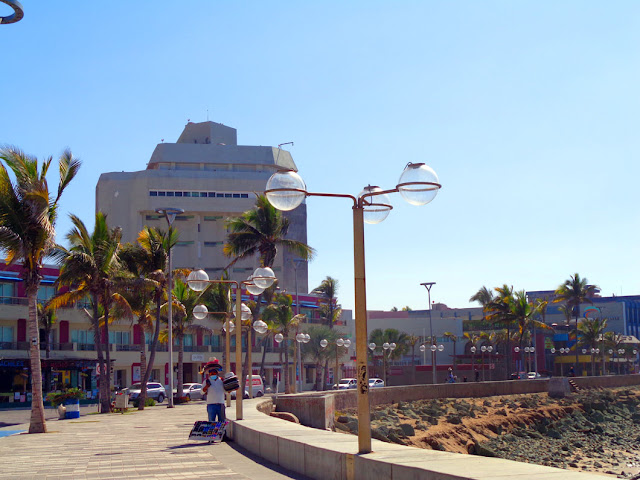 The carrying case for the drone he has been using lately. 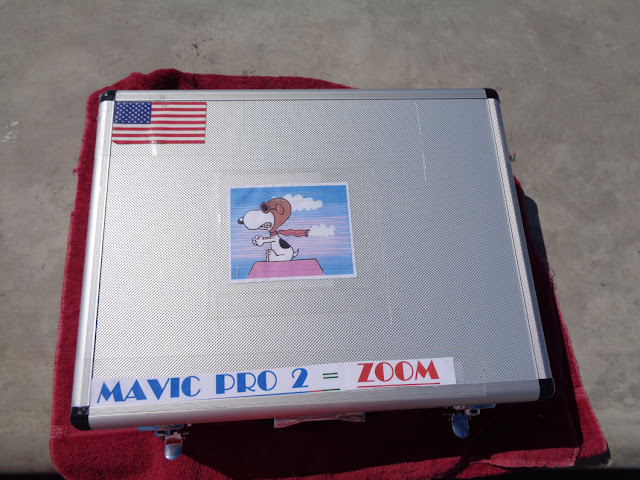 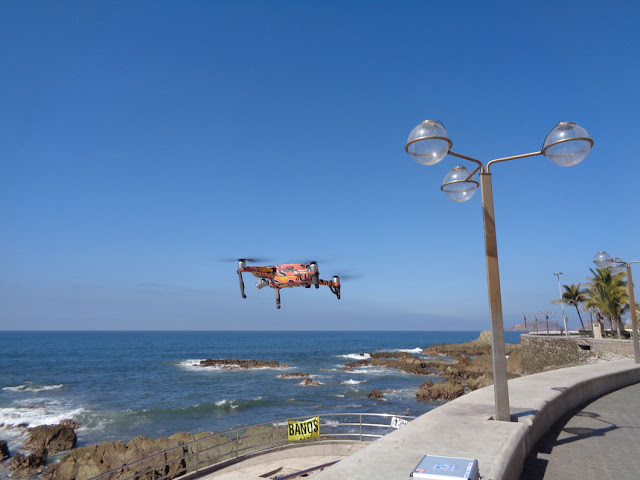 Up up and away. The wind was blow quite a bit and got worse as the drone got higher. According to the app it was blowing and gusting around 40mph. He only took it up to around 270 feet. I could see it being buffeted by the wind. 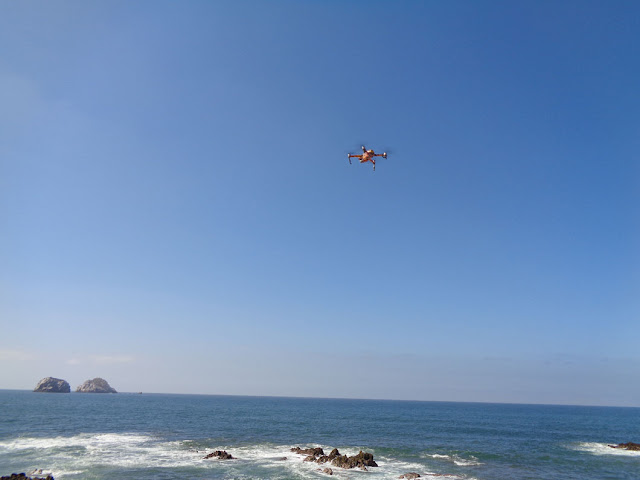 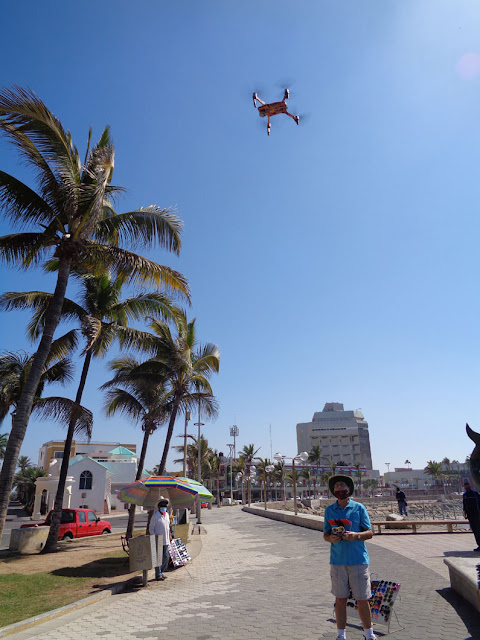 A couple more pictures that I took. Quite the view these places have. 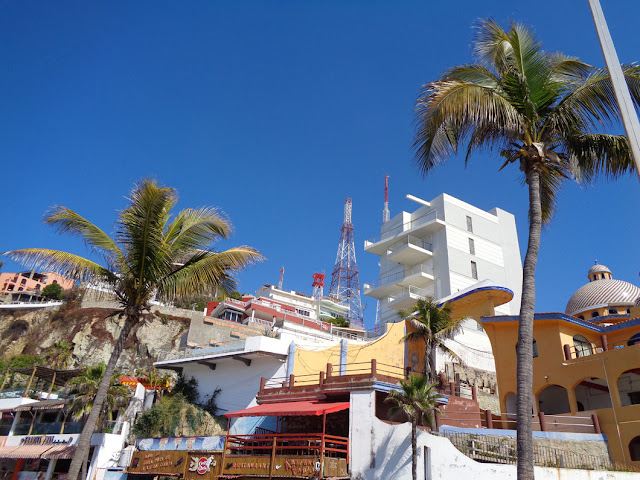 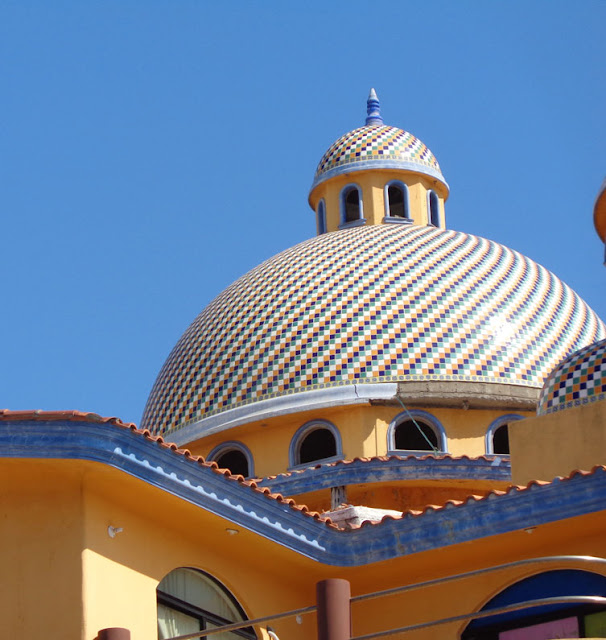 Took more pictures that day but will leave them for a day we do nothing. By the time we headed home the traffic was terrible. Mostly out of town cars who couldn't figure out where they wanted to go.
Just wondering and wanting some feedback. Keep putting videos on the blog or stop. Do they take too much time to watch? Are they interesting? Or should I just forget them? Being serious here.
Posted by Carol and Bill at 10:06 AM

I for one enjoy watching he videos and reading your posts every day!

We regularly go to a Tommy Burger in the Wal Mart shopping center area across from Sam's Town casino. There is a thrifty ice cream store there in the same "lot". Tastes the same to me.
Keep up the blog posts. Feels like I've stayed home forever because of covid restrictions..nice to see things from your travels.

I enjoy the videos and the fact you divide them into parts. The music is very nice and I find it all very soothing and relaxing. I love it all!! Thanks!

Love the videos, keep them going.

thank you Jackie, fixed I hope.

Please do keep including the videos. They are great!

On no keep the videos coming.

Another YES for the videos. Thanks for all you do.

The videos are great! I especially like the ones around Las Jaibas. Makes me not miss it so much!

I keep meaning to ask you, how is the RV park in Cerritos after the fire? Did they have it rebuilt?

Andy - thank you for your input.
Barb - had no idea there was a Thrifty there. Will have to check it out.
gumo - glad you enjoy them. will continue to include them when I can.

Jackie - thanks and thanks for the info about video and picture.
Beach Bound, Mark and Carl - thanks will keep adding them when I have some.
Doug and Nancy =thanks. Cerritos lost 68 of 79 RVs - it is cleaned up but not rebuilt. Most were Canadian so they didn't come this year at all. Don't know if it will ever be rebuilt. No insurance on a lot of them.

The Thrifty name and logo live on through Thrifty Ice Cream, sold in West Coast Rite Aid locations and various ice cream shops in the southwestern United States and over 200 across Mexico

Yes, please keep the video's, love them. We are frozen in Alberta, locked out of the US and Mexico so your video's and blog are our only view that there is actually some sun and warmth elsewhere, lol

Thanks for info about Thrifty ice cream
NormSusan - will work on keeping videos coming it really isn't very warm here this year. Very seldom above 75. at least the sun is out today.

Get A Blank ATM CARD And Cash Good Money/Funds Pay Your Debt directly today in any ATM machine around you anywhere in the world. contact cryptoatmhacker@gmail.com.. It's 100% guaranteed secure with no worries of being caught because the blank card it's already programmed and loaded with good funds in it, in such a way that's not traceable which also have a technique that makes it impossible for the CCTV to detect you, i am not a stupid man that i will come out to the public and start saying what someone have not done. For more info contact Mr john and also on how you are going to get your Card, Order yours today via Email: cryptoatmhacker@gmail.com