How we spend our time here

Well CRAP - we get our TV here from the Dish Anywhere  app, but to get it the internet at home has to be working. A huge wind storm went through Las Vegas and other places yesterday and our Cox Internet is not working. So no TV here.  And today is the first NASCAR race of the season DAYTONA!   Maybe they will get it fixed - or not.

Thank goodness it is up and running just in time for the race - which after 15 laps isn't running because of crash, lightening and now rain. Oh well.

Going back a few days.  Tuesday and Wednesday - it is a good thing I keep a kind of journal or I wouldn't remember what we did when we did it. Tuesday the upholsterer Jorge came. His truck.(See the empty campground. The people next to us left a week ago. The two rigs that needed mechanical work have been fixed so they will be leaving soon so that will leave two of us here in the back and two in the front. ) 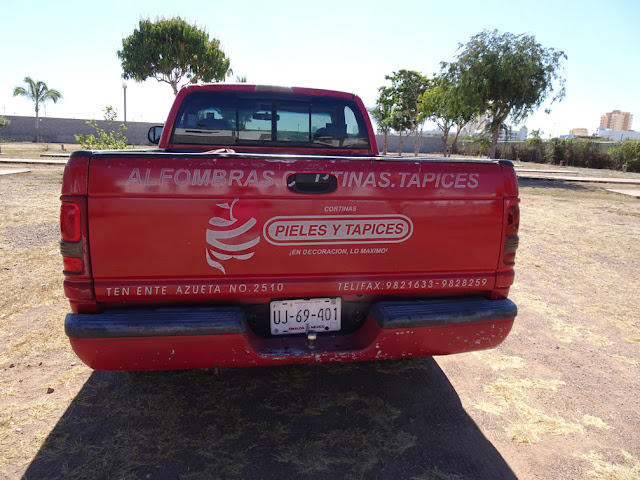 I knw I posted this before but...The red arrow points to the back cushions of the dinette - They actually were not peeling, but it was only a matter of time. The green arrow is the cushions from the sofa. One of them was completely peeled off. Should have taken picture but forgot. So they left. 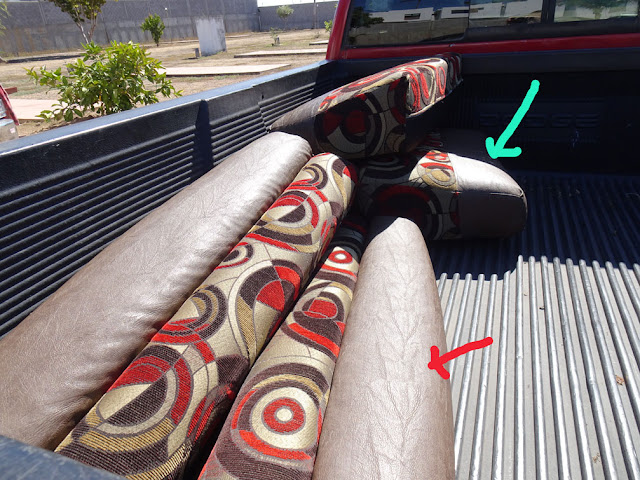 This is Jorge the upholsterer. 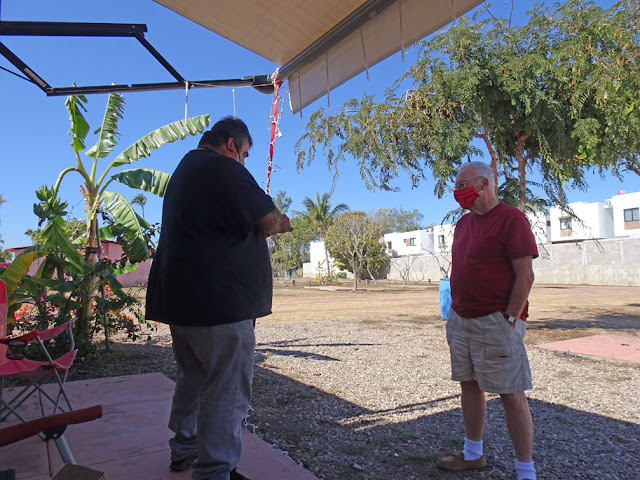 This is the frame around the dinette on the side where I sit all the time. My computer desk. 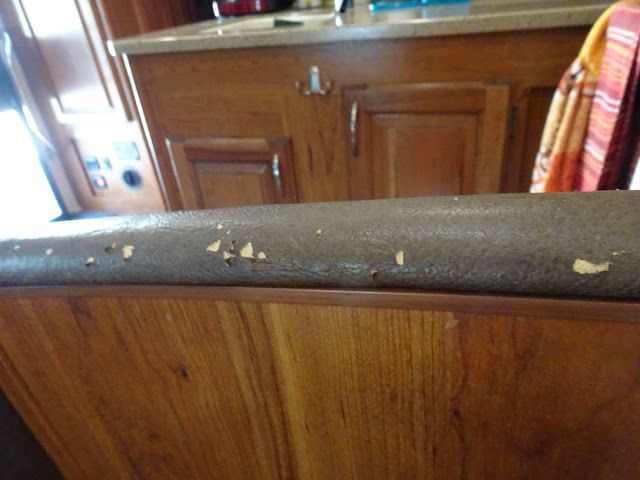 See the very bottom the edge there was peeling too. 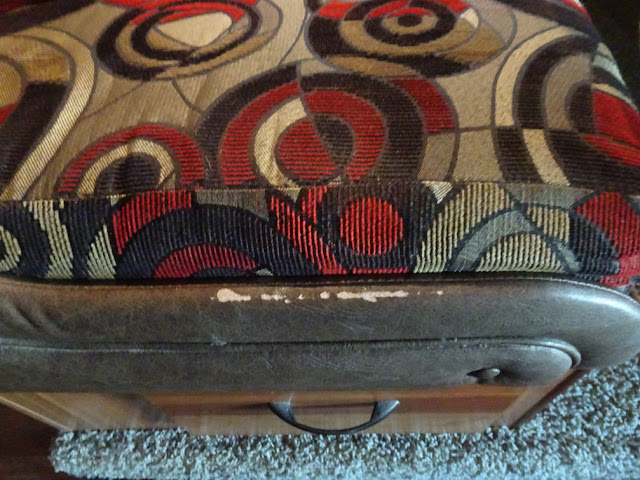 The other side where no one sits was not peeling, yet. But things have to match somewhat. 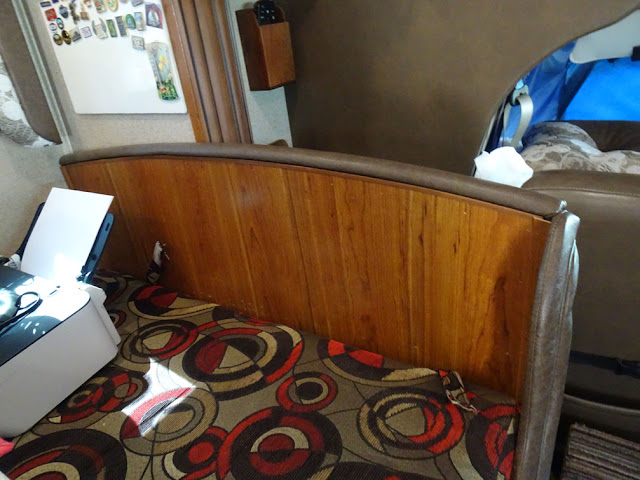 No one else coming so we decided to go to Centro to check on Bills watch, besides it was a good excuse to get out of the house. They are starting to work on the bike path right in front of the RV park. 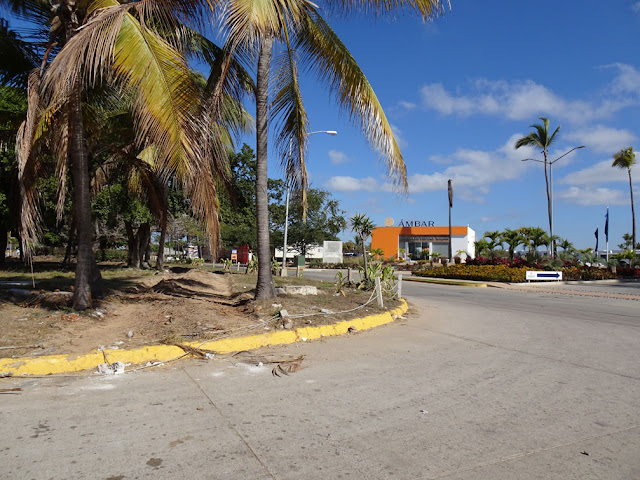 Driving along the Malecon, you really have to pay attention because there are unexpected obstructions in your lane from time to time. A truck delivering something to one of the beach side restaurants. 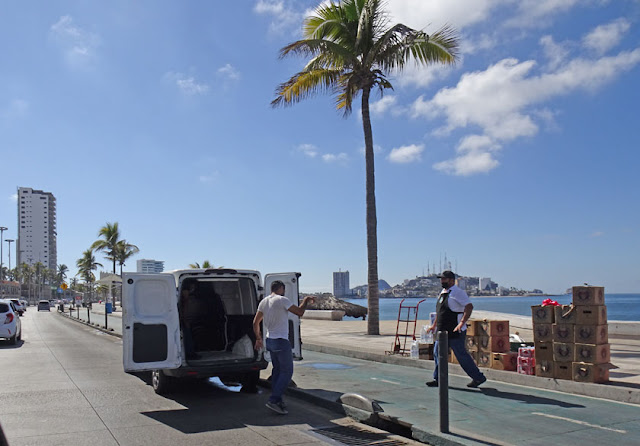 Looking back at the city., For the first time in days there was no mist in the air. 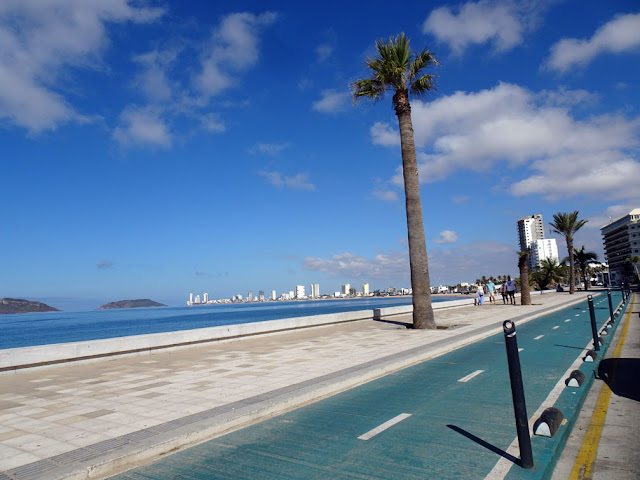 The ocean was as smooth as a pond, not a wave. Some fishermen bringing their boat in to park it on the sand. See the reflections in the water. Unusual. 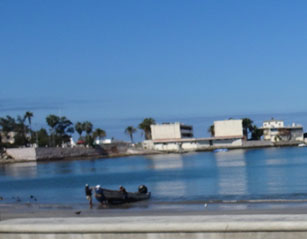 Heading into Centro. When someone parks on the road there is no way by. Had to wait for him to get back in his car and move it a little off the road. You get used to that. Nothing to do but wait. 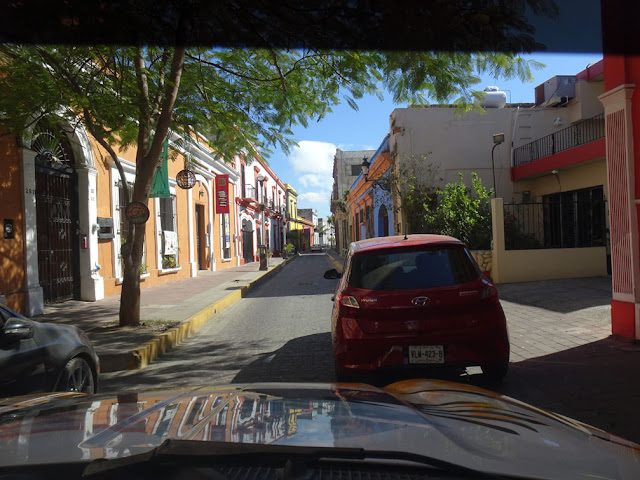 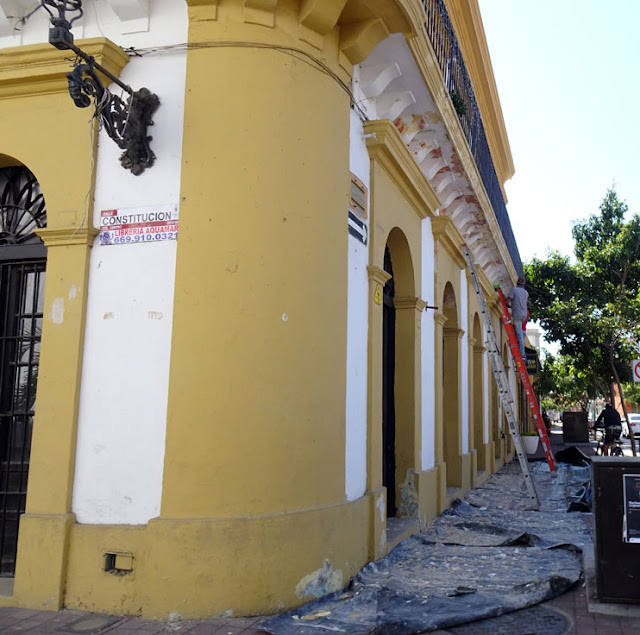 This is the restaurant we ate in when I took the pictures of the statues at night. It is only open at night. The big green sign tells the history of the building. The white sign say, Please turn down the volume. Directed at the pulmonias and cars driving around with their radios on full blast.  Guess the city is going to start enforcing the noise levels again. They've tried it before, works a couple of months then - things return to normal. Ear Splitting. 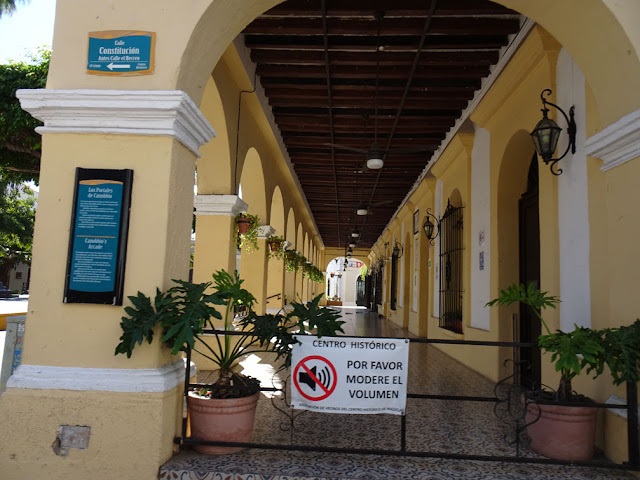 Work was suspended on this building until last week. City had put up a Big SUSPENDIDO sign on it. Must not have had permits or working conditions weren't safe. Still doesn't look very safe to me. Heading into the watchmakers. Part still on order. This coming week we will have to pick it up fixed or not. 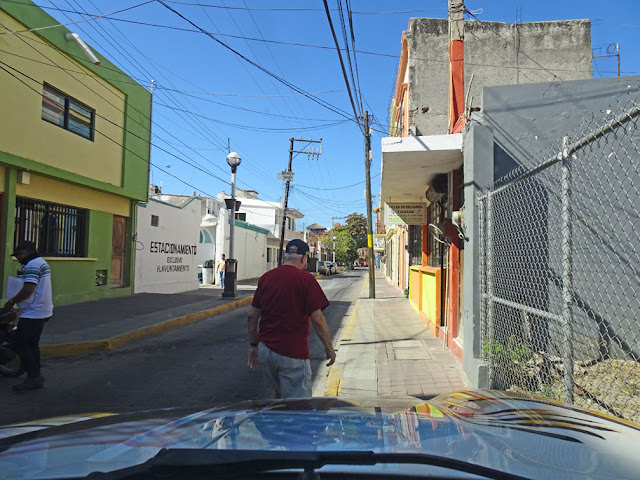 Even the rocks are reflecting in the water. Very smooth. No wind or waves. 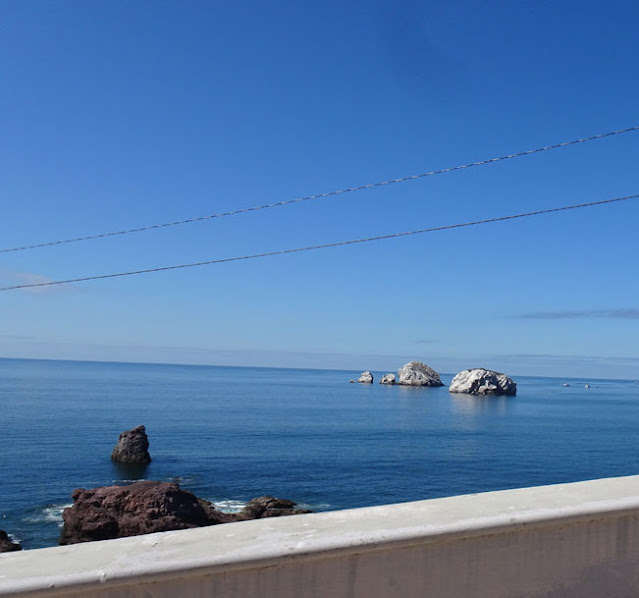 The museum building for the Observatory. Looks like they added a little look out area to it. It still is not open. 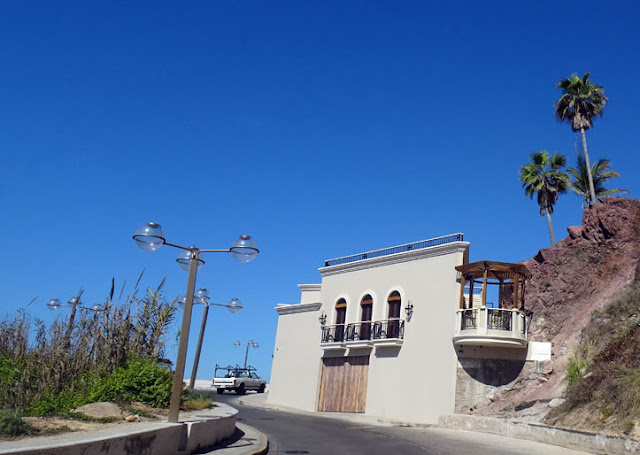 Coming down a hill looking at a hill full of radio towers and homes. 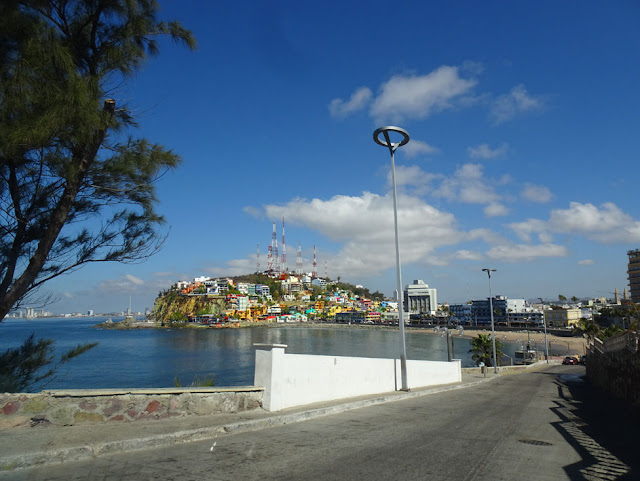 This last year this school was completely restored. Looks so nice now. 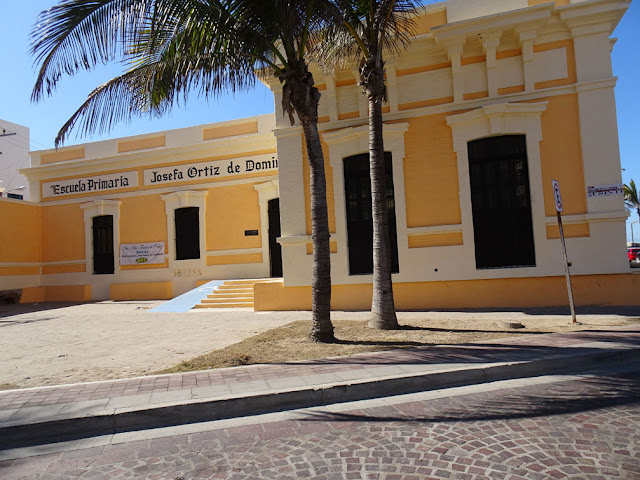 No idea why I took this picture. Maybe to show lack of traffic, and people, maybe for the shadow of the palm tree. 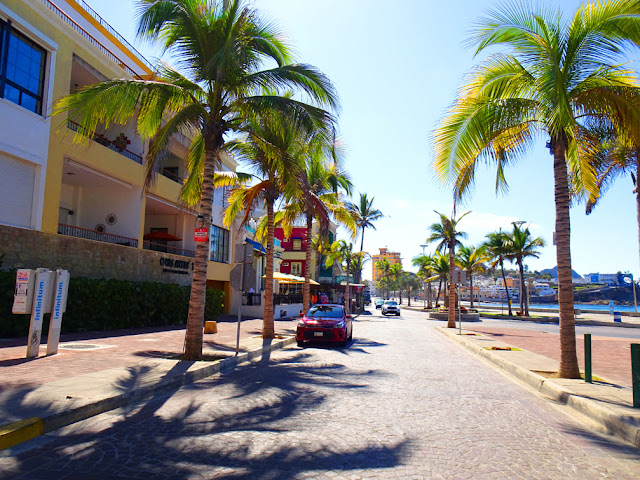 Oh, race is about to begin again. So will stop here for now.
Posted by Carol and Bill at 1:25 PM

Did I miss something..are you heading home?

Kathy - yes leaving Saturday. Nothing wrong just want to go home. If going to be stuck inside, we want the room of our home and comforts of home.

Is there any Covid testing needed/done when you drive across the border into the USA from Mexico. We have not heard. It is quite strict what testing you need to have when flying into USA or Canada. Traveling mercies on the trip home. Stay safe and stay well. Have so loved seeing all your photos of Mazatlan the last few months.