Sunday and part of Monday

Sunday was a quiet day. The tourists were still in town for the baseball series so we basically just stayed home. Except for going to WalMart early for groceries. We thought about going to the Plazuela Machado in the evening but it got too cold about 5:30 and the darn wind picked up. So scraped that idea.

Monday morning was a sunny day so about 11 we decided to take a ride. We drove up to Cerritos watch the fishermen

The city is building another bike path. Right down the center divider along Sabalo-Cerritos. On our way to Cerritos we discovered they have already started the work. 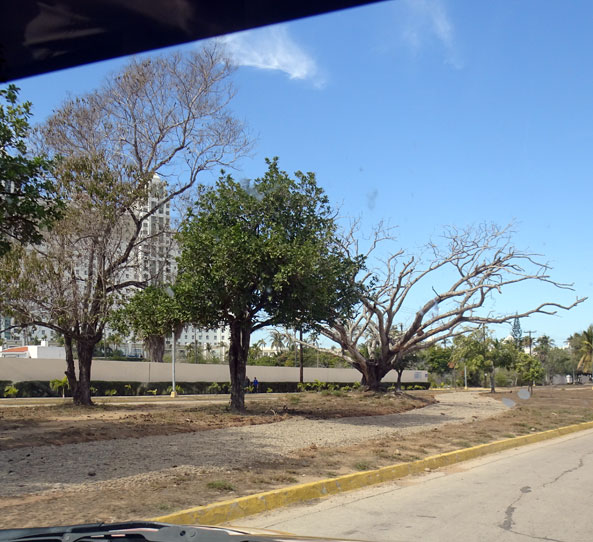 Mazatlán, Sinaloa.- With the construction of the Sábalo-Cerritos bikeway, which will have an extension of 4.4 kilometers and an investment of 23.5 million pesos, Mazatlán is positioned above other beach destinations in the country, by connecting 18.3 kilometers of the coastal bikeway.en at Cerritos. When giving the starting signal for the work, Governor Quirino Ordaz Coppel assured that this type of work gives Mazatlán a greater projection as a tourist destination and directs it towards the future, with an urban infrastructure that prioritizes mobility for pedestrians and cyclists.

This bikeway will run from the Marina Náutica to Playa Cerritos, with a length of 4.4 kilometers, it will connect to the Camarón-Sábalo bikeway, and this in turn to Avenida Del Mar, Rafael Buelna, and Paseo Claussen, forming a circuit of 18.3 kilometers of the bike path near the sea.  The work is projected to be completed in four months, includes an investment of 23 million 573 thousand pesos, of which 18.5 million will be provided by the state government and the rest, the municipality of Mazatlán.

Any way, when we got to Cerritos most of the fishing boats were already in. And it looks like it was a good catch. 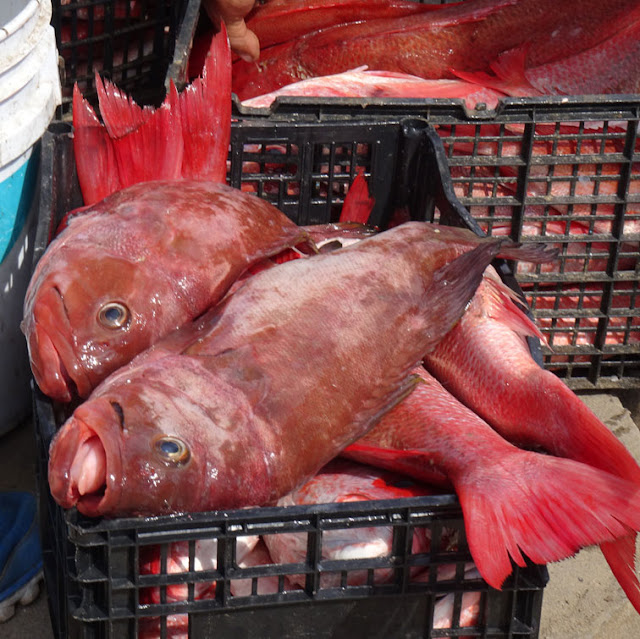 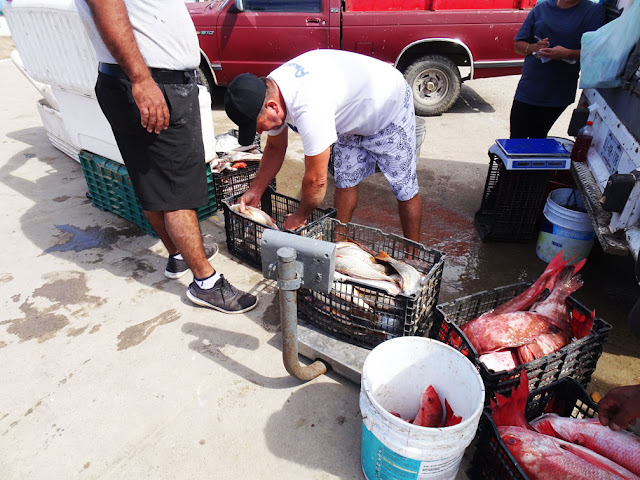 Most of the boats were in. The one on the right is usually one of the last ones to come in. 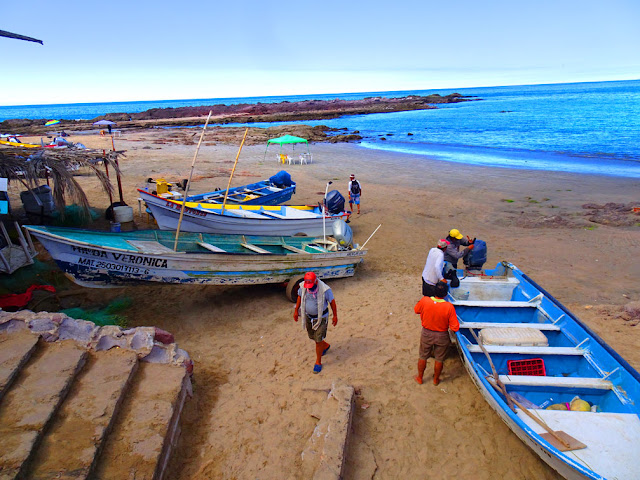 Taking the rest of the stuff out of it. Last item to take off is the propeller of the engine. 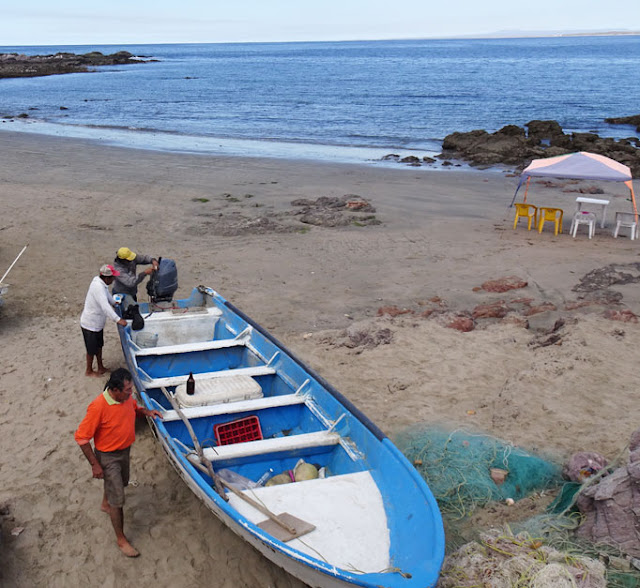 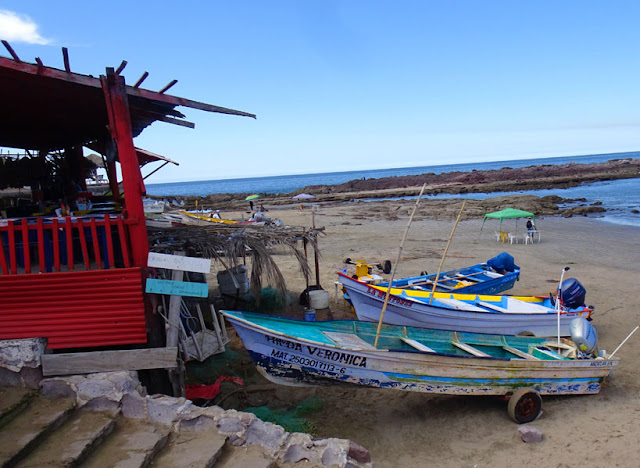 The pickup is pretty much loaded. The umbrellas belong to a couple of vendors. One sells peeled and cut mangos on a stick. Pretty good. 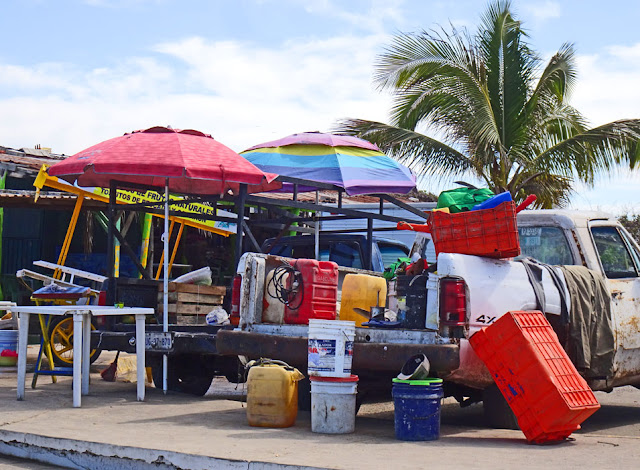 A vendor loaded with all his wares. Very calm sea that day. Wonder what he was thinking? No one around to sell too. 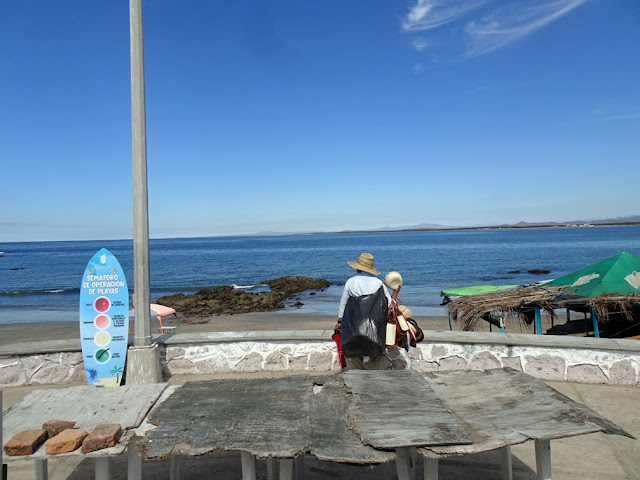 One of the restaurants sells the odd items that the fishermen bring back. 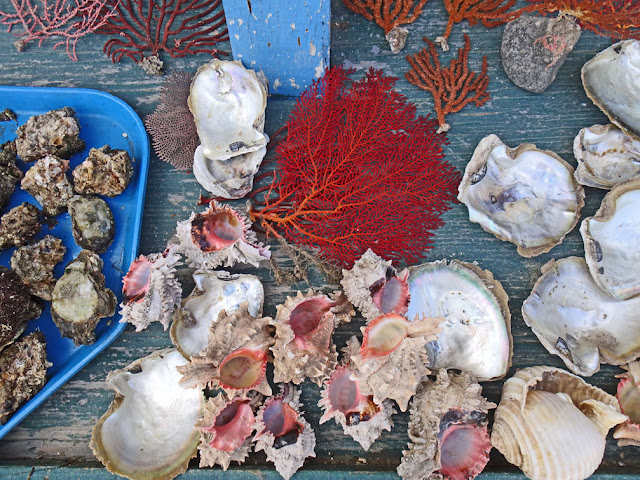 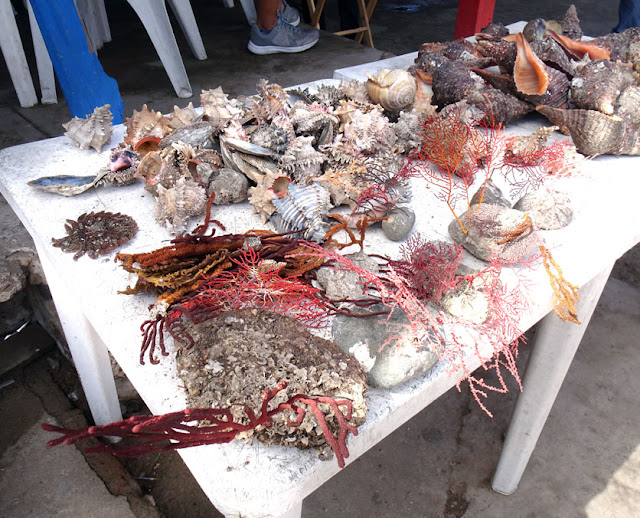 Still selecting which fish he wants. 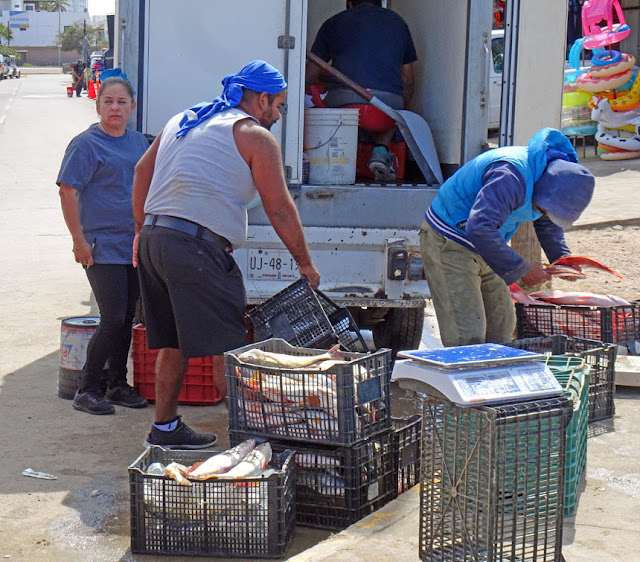 He has his scale right there with him. These are some big fish. Red Snappers? 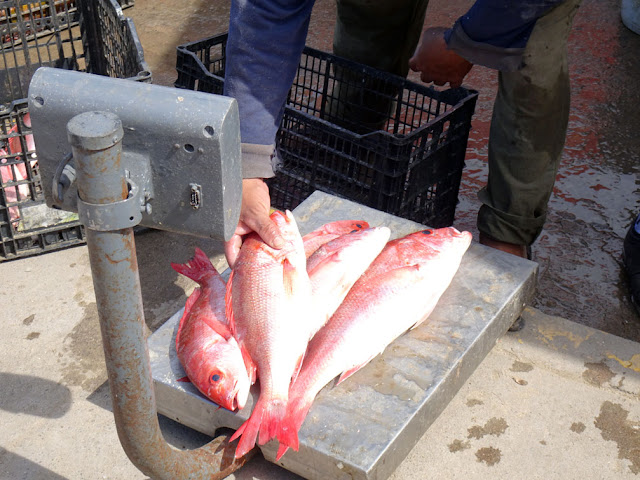 Like I mentioned we were there about noon. Only a couple other tourists there. Several of the shops were closed. 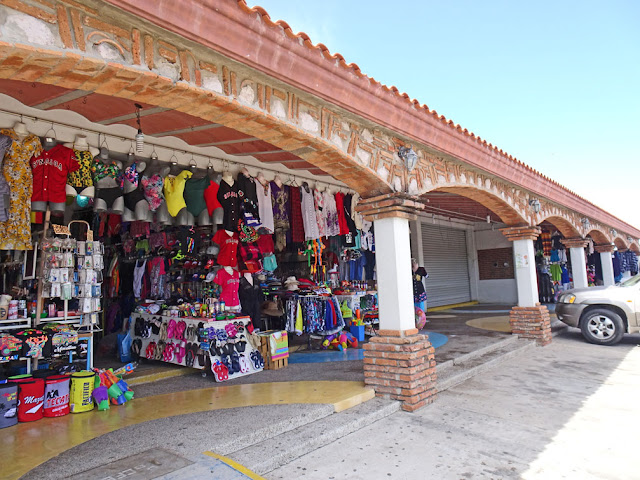 Every one is selling these painted hats now.  They aren't very comfortable. 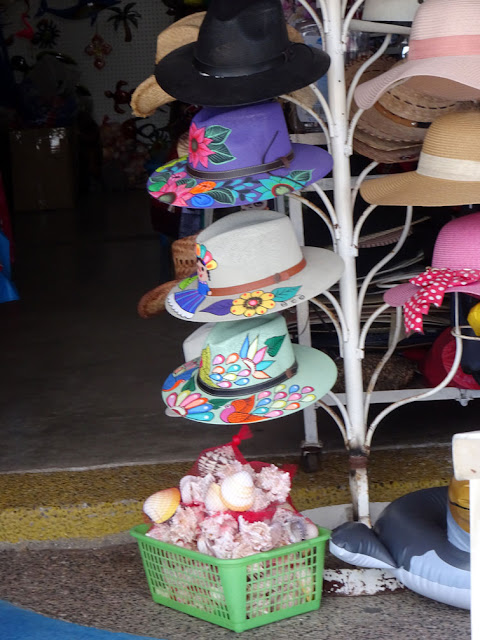 Guess he decided to go somewhere else looking for customers. 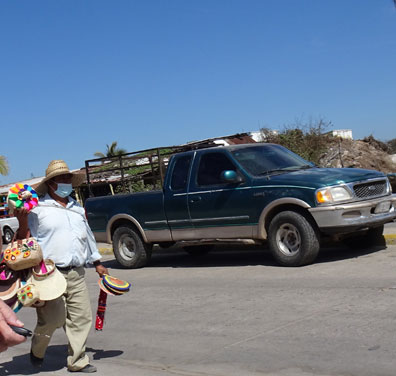 An old boat just sitting in the weeds. 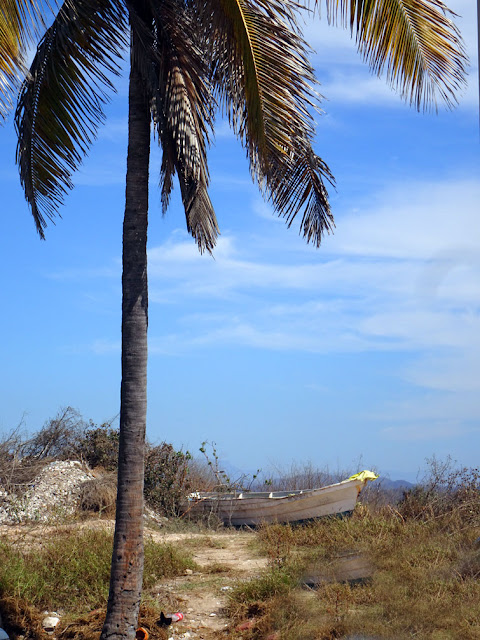 These men have a hard life. The guy in the white shirt is amazing, he is in his mid 50's and is always on the move. Helping bringing boats in, helping carrying the coolers to the trucks - never seems to slow down. 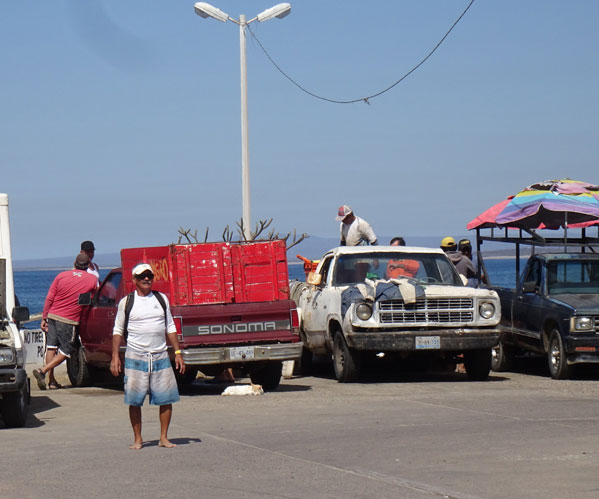 More of the bike path. This part has gravel on it. They started in Cerritos and are working their way south towards the Marina. Have just started to mark the path in front of us. 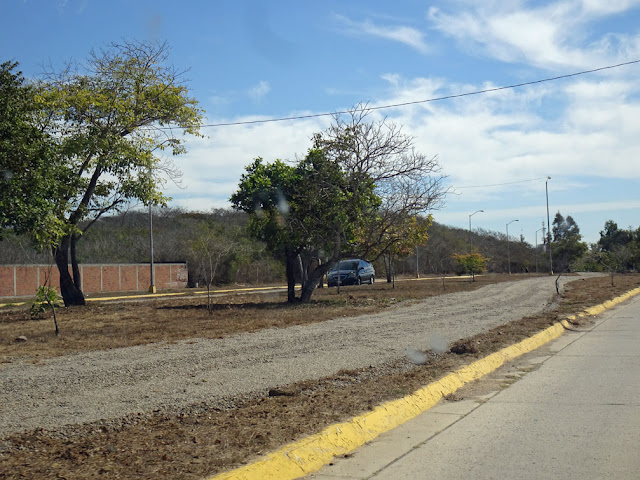 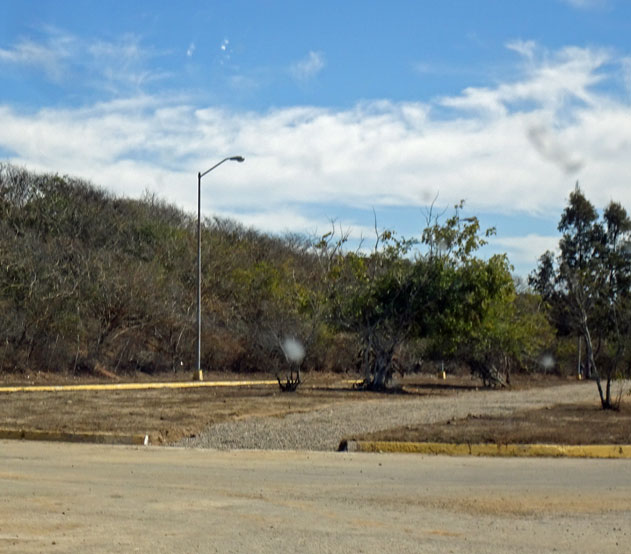 Looks like it will all have gravel on it. Wouldn't that be hard to ride in?  Maybe it will be base for paving it.   No idea. 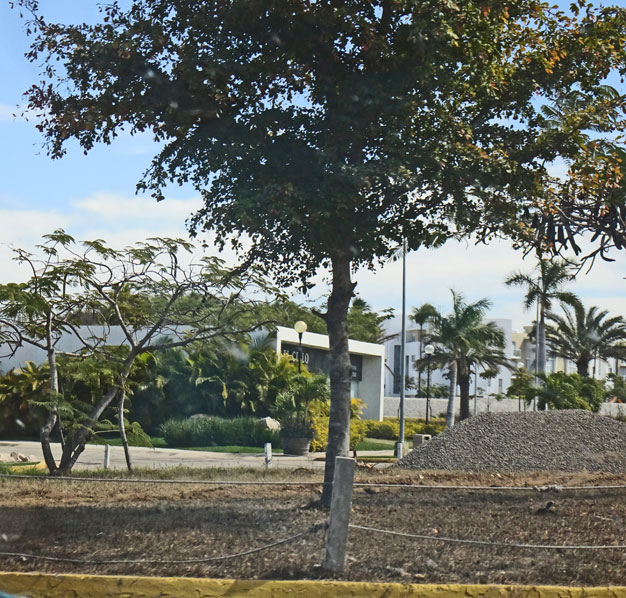 And home we went until later in the day. Around 5 p.m. we headed out for the Plazuela Machado. There were a lot more people out and about then I'd expected. 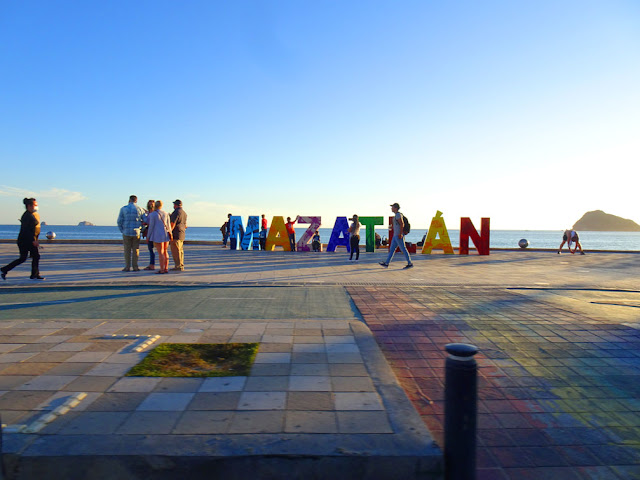 But it looks like the vendors expected the business. 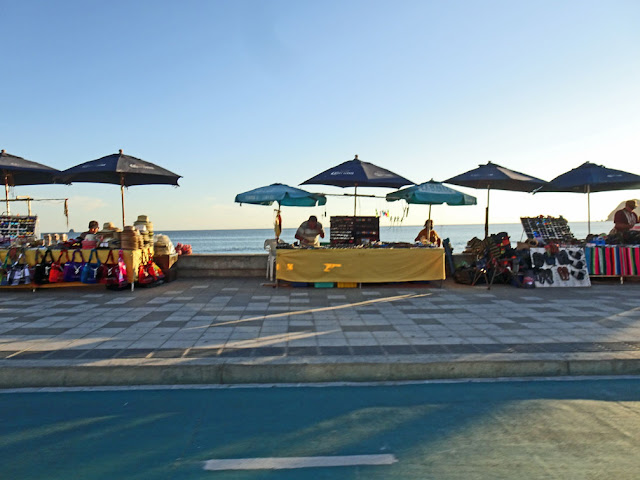 Father and son enjoying the bike path on the Malecon 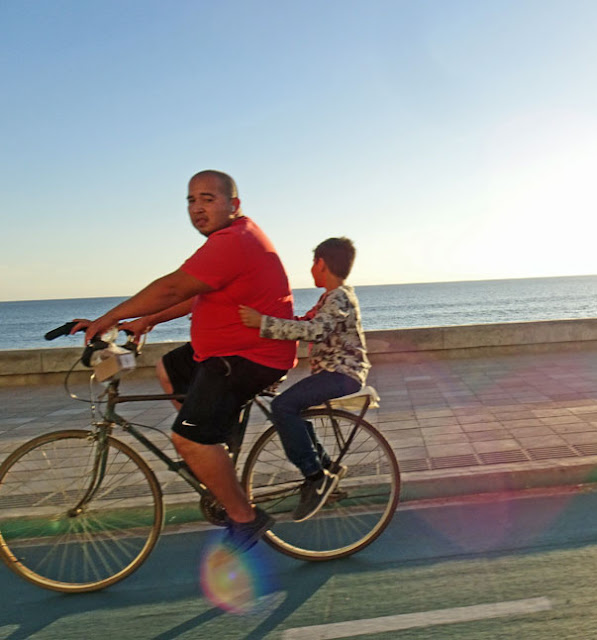 A band looking for some one to play for. 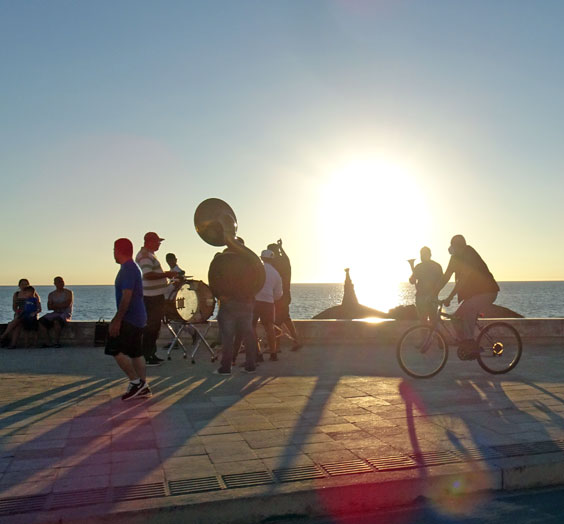 Back to Olas Altas area. 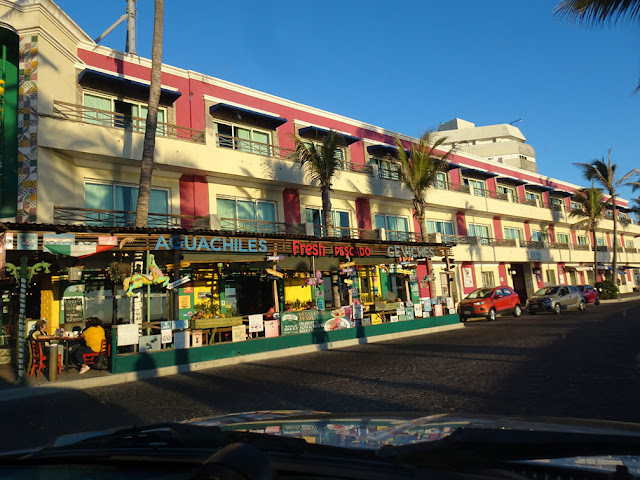 Young Love! - Nope a photo shoot, he was fixing her makeup. When we first turned down this street we could see her dress sparkling from over a block away. She was crossing the street and we couldn't figure out what we were seeing. All we could see was the sparkling thing moving. 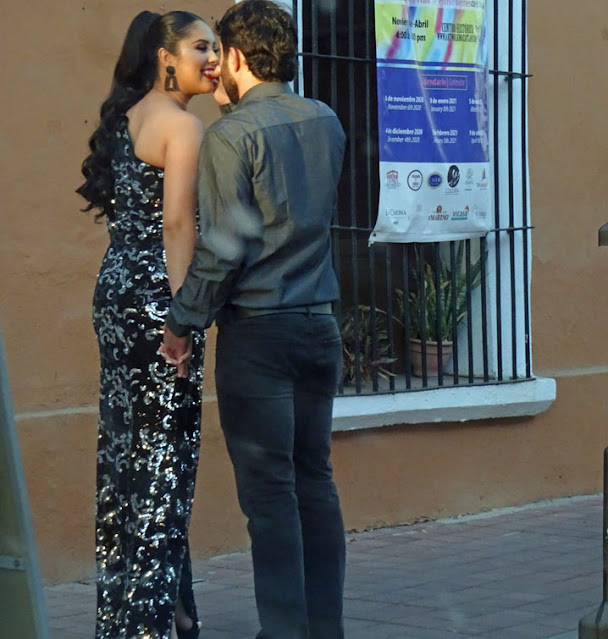 In the parking lot. I looked up and saw these clothes drying on a louvered window. 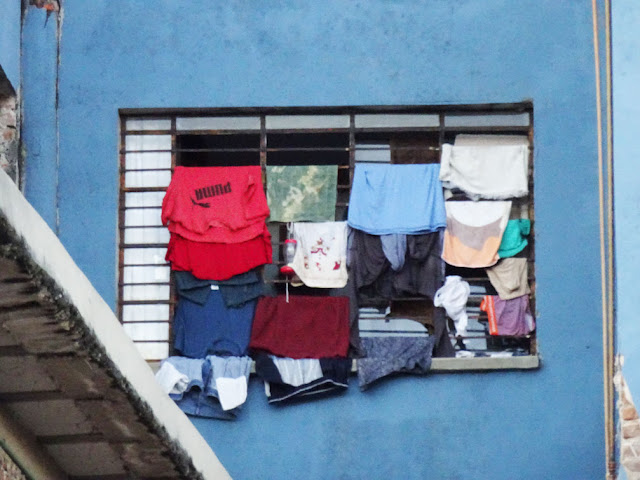 On to the Plazuela Machado. A magical sight.
On Tuesday the upholster came over and took four cushions from the RV to replace the "leather look" material on them. The cheap stuff was peeling and looked like mice had got to it. Next week he will reupholster all the frames of the dinette. I have never seen such shoddy material used in an RV. Shame on Jayco. The cloth material is fine. It should be we already had it reupholstered here a couple of years ago. The top portion of the larger cushions from the couch look like they went through a grater. 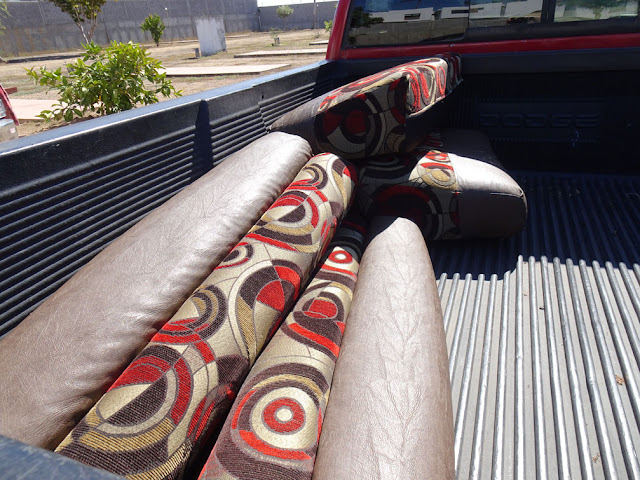 Looks like a mouse got to it.  It is just from touching it. Couldn't match the color so all has to be done. Notice bottom right of picture the frame around the edge of the seat is peeling too. 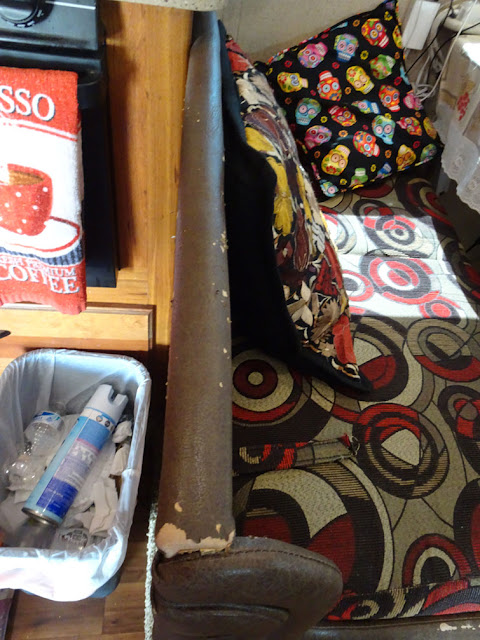 Oh well. Get the cushions back Friday and he will take the frame with him to do. Also getting new harder foam in the bottom cushions.
NASCAR is back! Kyle #18 M&M's car won the first race of the season last night. Not a points race, just bragging rights. Hope his whole year goes better than last year.

I think my couch is a lot worse than yours. Mine is right under a window and the cheap vinyl has been disintegrating for about three years, and it is shedding all over. I have been looking for a replacement, but Fleetwood does not sell these anymore. And this one has heating ducts underneath and a hole and heating duct in one far end, so a new couch will have to be made to fit in the same space. Might try to get someone to recover it.

Wish they would use slightly better materials in these things!!!

Judy - I didn't get a picture of the couch cushions. The one where Bill sits had lost almost all of it brown "leather" Getting real leather now. We are in same boat as you, can't replace couch as it is on a raised slide and all the wiring harness runs there. We wanted to take out couch and put in recliner. cant do that. And on the cupboard handles, the top finish is peel off. So cheaply made.

So many interesting things in your posts. The girl getting photos was gorgeous. I love fish, all fish. An old friend had a son who worked on a commercial fish boat and back in those days the workers could take home the odd types of fish unlike now when they throw the dead ones back if they're not in their quota. We ate a lot of strange delicious fish. Isn't it amazing how cheap and easily you can get repairs of anything done here in Mexico.