Bill better so we went out and about. A couple of interesting things.

Monday morning and we are still in Quartzsite. At least Bill is feeling more better. We even went out to breakfast this morning. Can you imagine a restaurant in this day and age where coffee – unlimited refills – is only 99 cents? La Casa in Quartzsite.
If Bill continues to improve we will be leaving tomorrow for Gila Bend then on to Tucson next day. Although he is already fussing about stopping in Gila Bend, only 125 miles from here. We’ll see. By the time we’ve gone that far he might change his mind. As long as we are in Tucson by Wednesday so we don’t miss our appointment for repair on Thursday.
He felt good enough after breakfast that we took a short ride to Quartzsite’s Town Park. I had read about Celia’s Rainbow Gardens that is a part of the park and thought we could go there. What we could see of the park was nothing but desert, no gardens. Saw a baseball and a soccer field. The baseball field had grass the soccer field was all rocks.
Then we came to a skate board park with this cute sculpture. 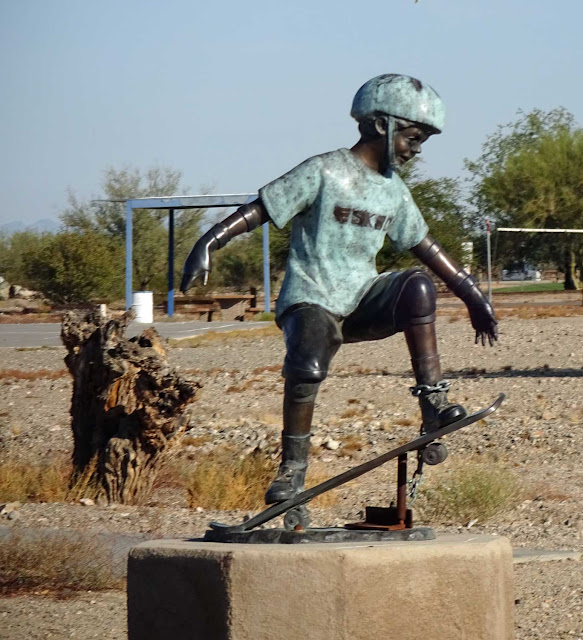 By now Bill had lost interest in the Gardens so we turned back towards town. Did stop to look at a couple of old airplanes. 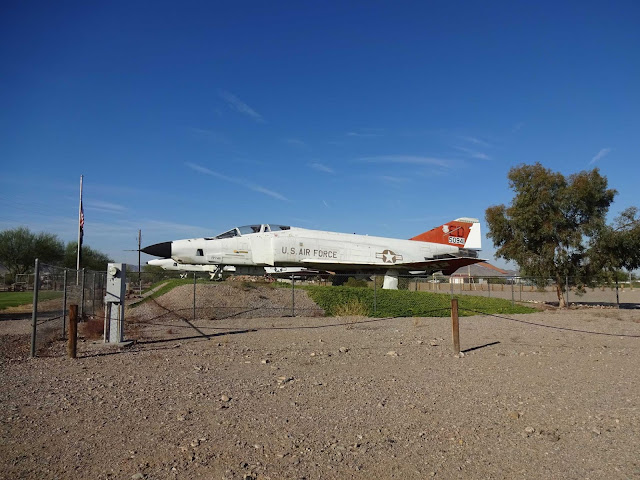 Then on the corner was a sculpture of an ocotillo. Can’t see it very good in the picture. Then we drove along Main Street. An old gas station well preserved. 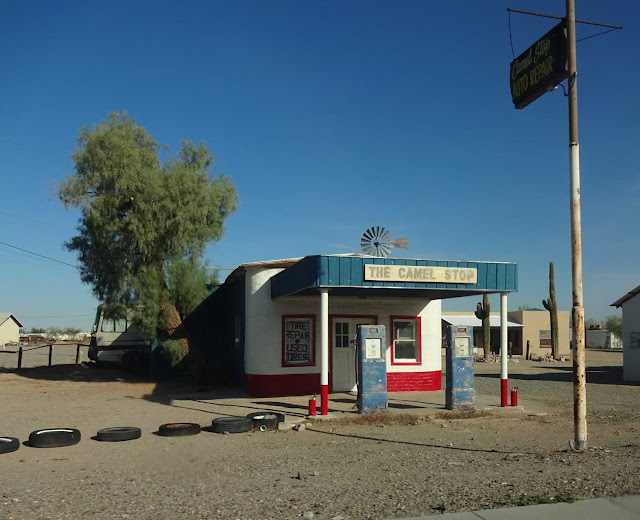 And saw this at one of the RV parks. Drove through and checked out the palm trees made of horse shoes. 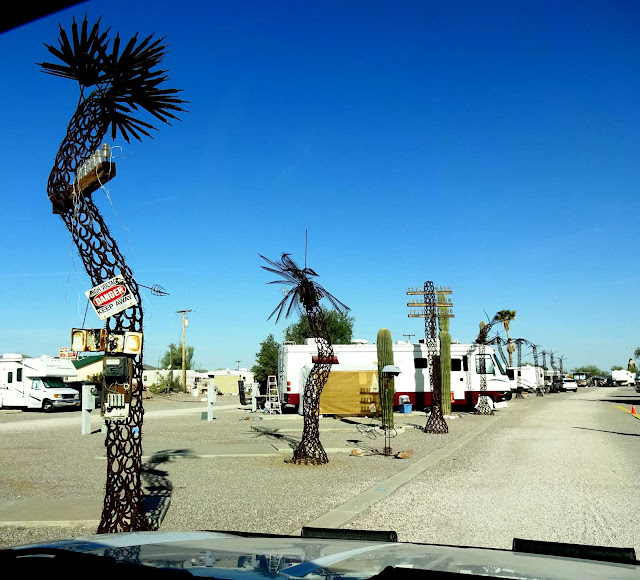 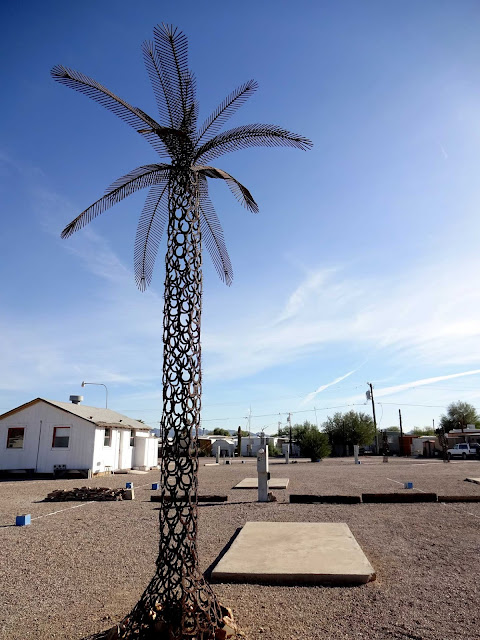 Came home and Bill said he was going to lay down for a while. I said, okay but I thought I’d walk back up to the park and look for the garden. He didn’t think so! So back into the car we got and back to the park. This time we found Celia’s Rainbow Gardens. Not what I expected but very interesting. It is a 20 acre section of the park with trails and desert plants. 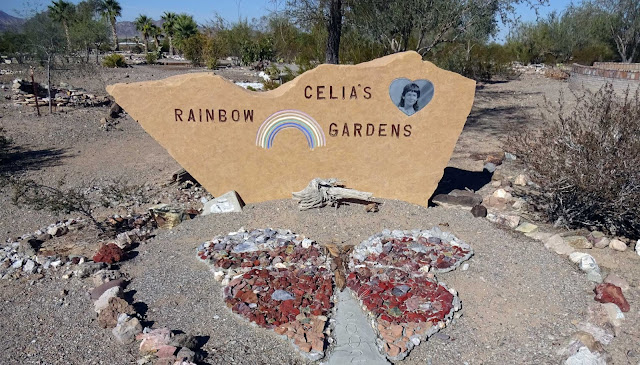 It was started by the Winer’s who lost their 8 year old daughter. It is more of a memorial park then a pretty garden. It is a work in progress with more and more memorials being added. It is kept up by volunteers. One of the first memorials I came to. One of the larger ones. 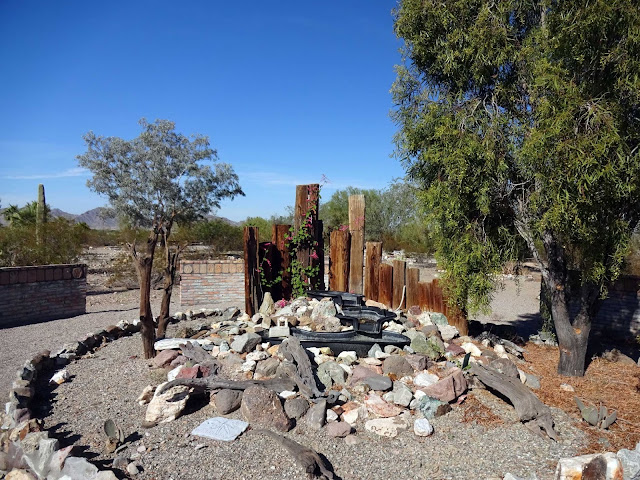 A close up of one of the details on it. 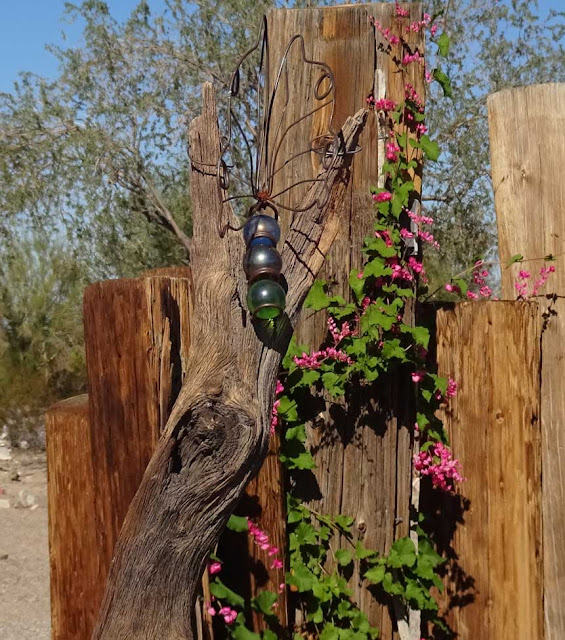 Two curved walls with hand prints in some of the blocks. 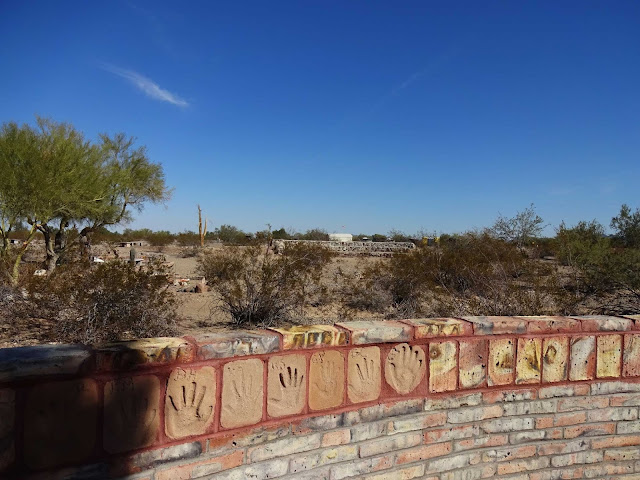 Metal sculptures added to this one. 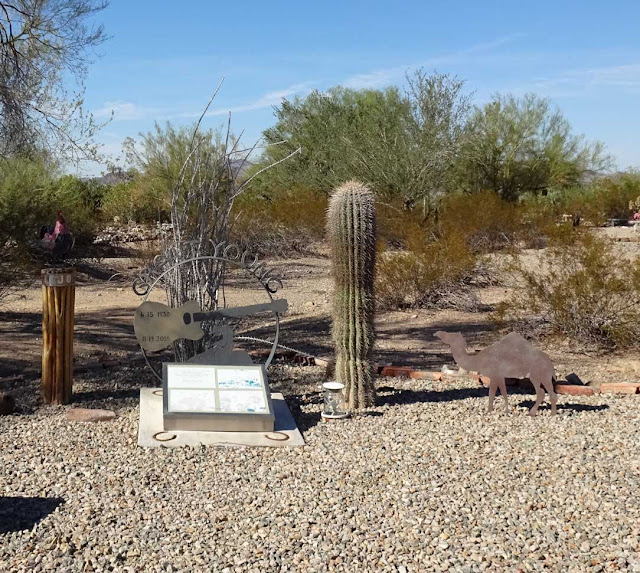 Many of them had benches to sit on. The shoes made me wonder. 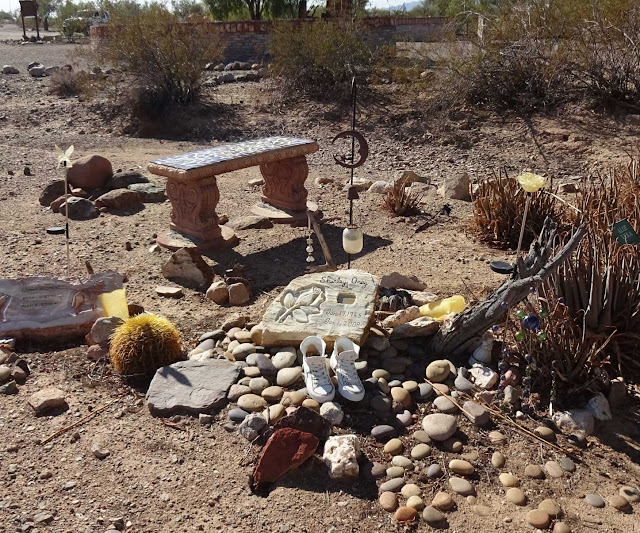 And there was a miniature pioneer town. This is the information I found about it.
Adamsville was moved from Castle Rock Shores RV Park, near Parker, along the Colorado River. Babe Adams started building the village in 1974. Babe and Babs, his wife, live near Parker for 18 years. They donated the village to the Quartzsite Historical Society. It was restored by many volunteers and given to Celia's Garden. It was set in place in 2001. 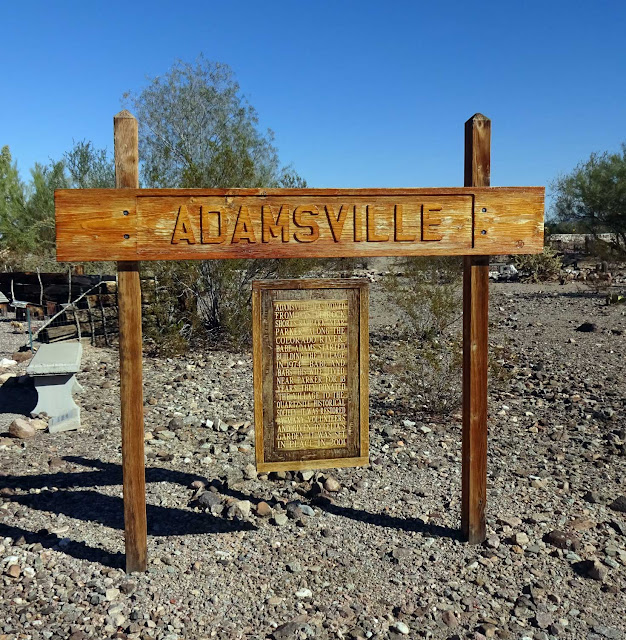 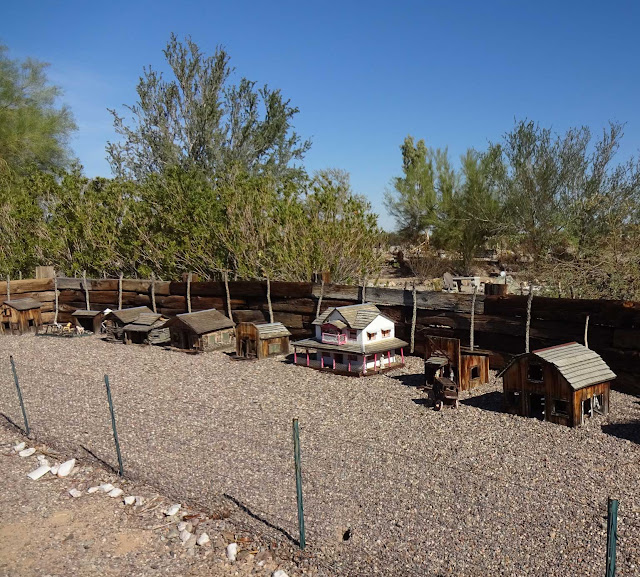 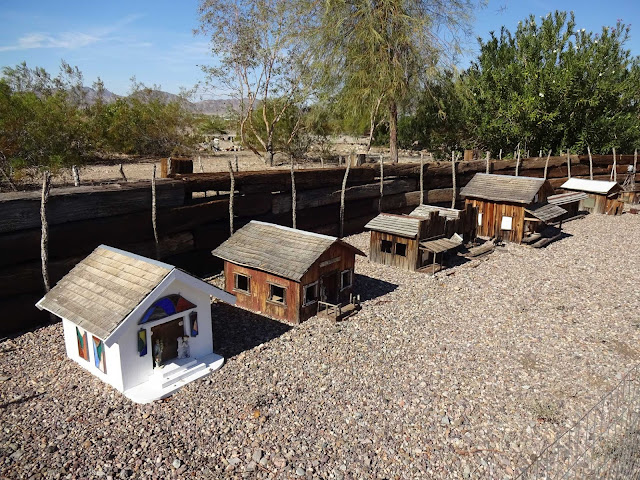 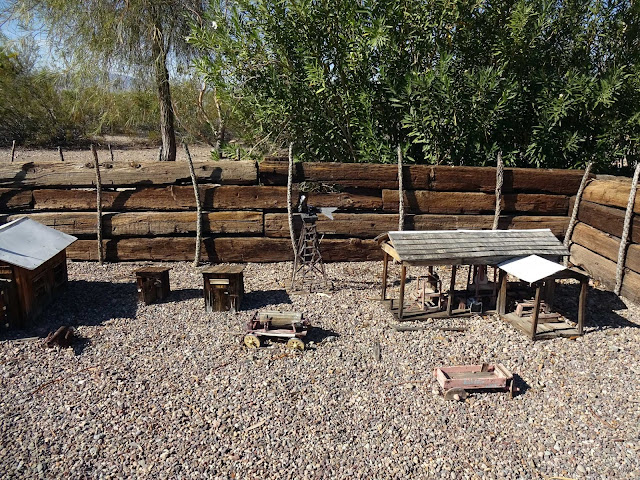 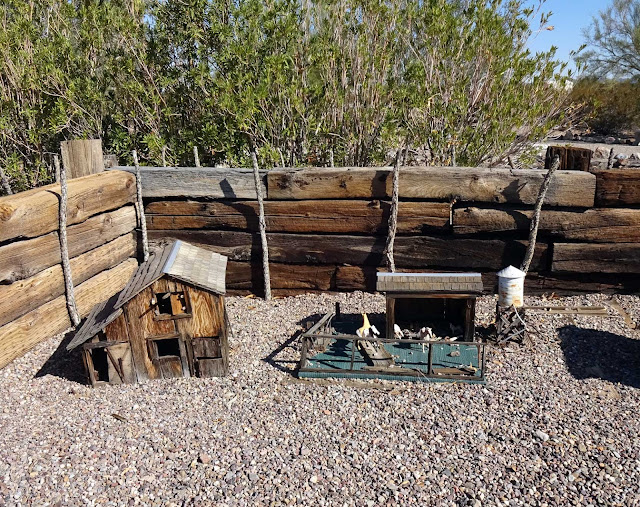 More of the memorials. As I was walking around I heard the Jeep's engine. It sounded like it was driving away. No couldn't be. Then it sounded closer again and shut off. Maybe Bill was looking for shade. 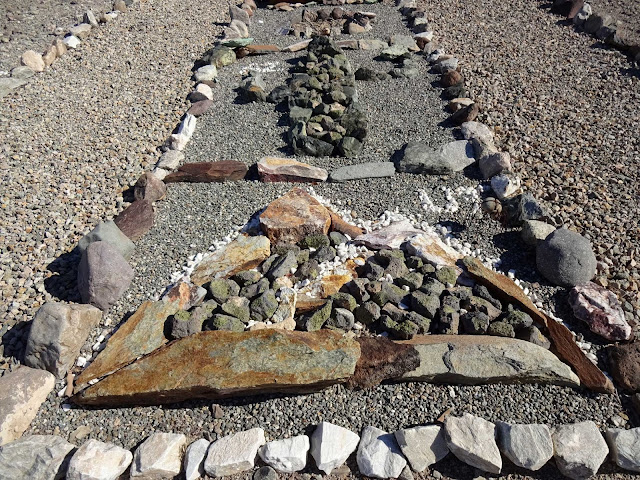 I thought this one was interesting. The little statue in the back is a metal frog with a guitar. Notice the name on the guitar. 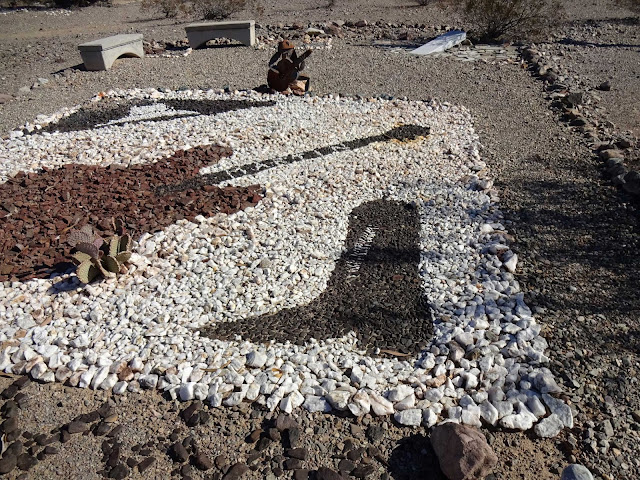 I wonder if his wife liked gardening? 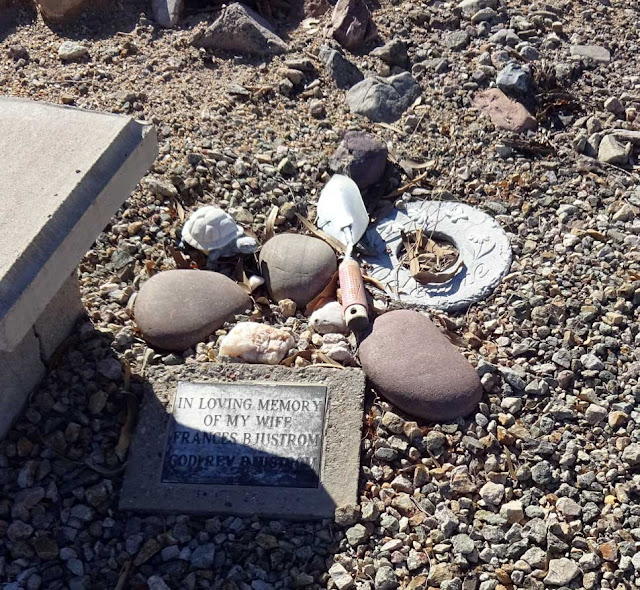 This one has a piece of stained glass in the center. One of the smallest memorials. 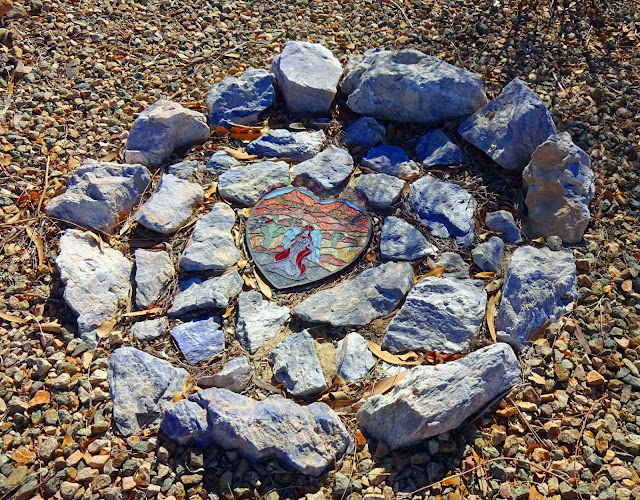 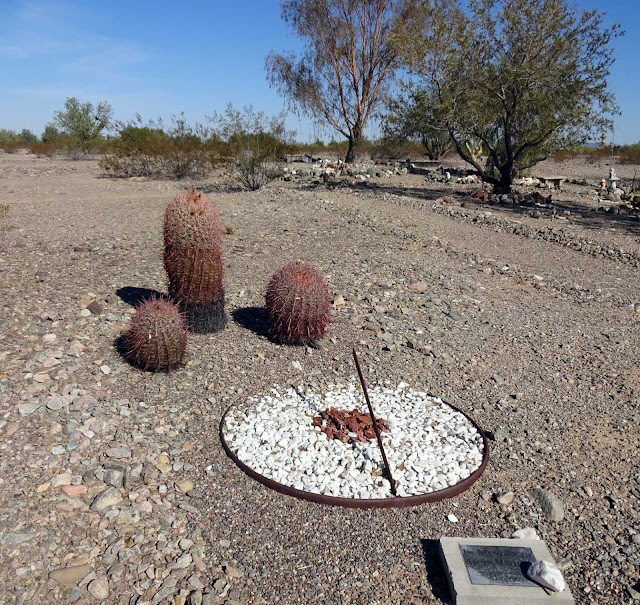 If we ever come back here I'd like to spend more time exploring this Rainbow Garden.
When I figured out how to get find the parking area I discovered the Jeep wasn't there! But I could see it a ways away. Bill had gone over to the radio controlled air field that is part of the town park. There were four or five older men their with their RC planes. I recognize some one there 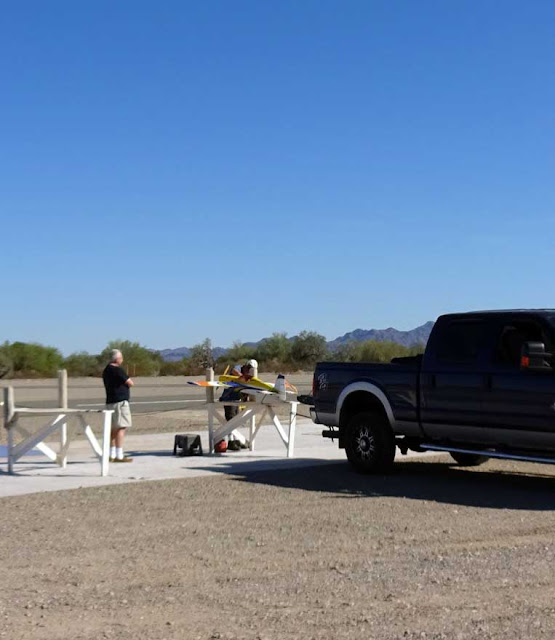 Getting one plane ready for takeoff. 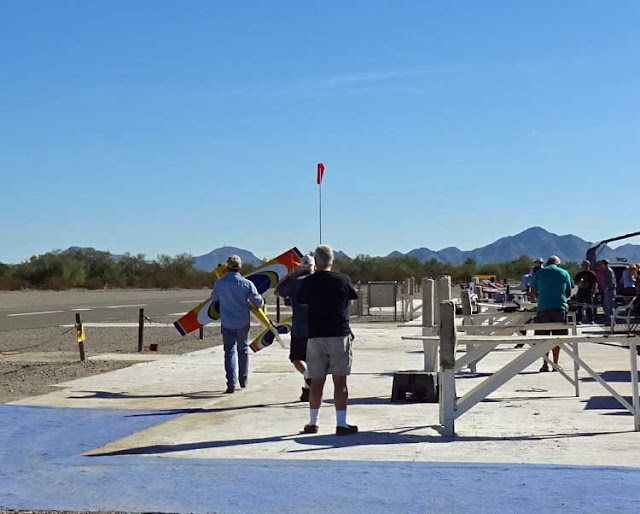 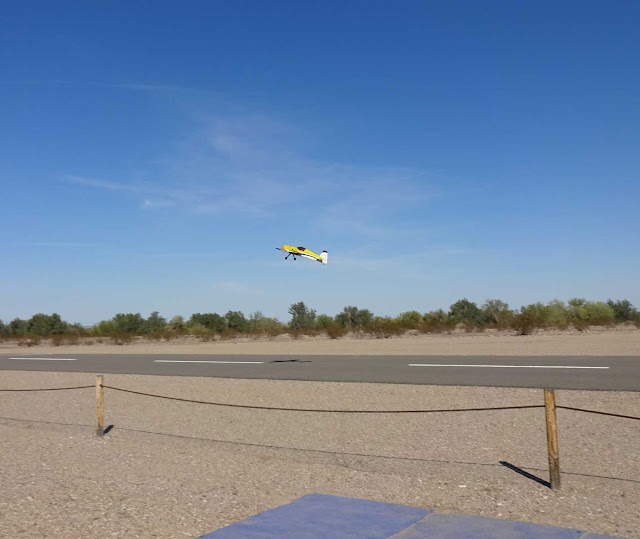 This plane had a  blond Barbie doll as the pilot. 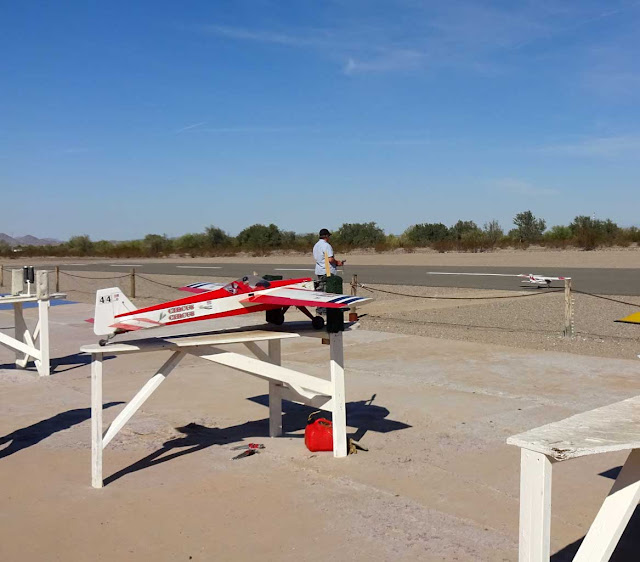 Came home and settled in for rest of day. We'll leave tomorrow and go to Tucson. Have reservations for a couple of nights and will see how long we'll have to be there for repairs then decide what to do after Thursday.
Going to try to get this posted before I lose the internet again.

You always find neat things to visit wherever you travel.

I find a lot of things on the Internet - a lot of them I can't drag Bill to...