A Pulmonia Ride in Mazatlan

Monday morning bright and early we drove Willie, the Jeep, over to the painters shop. The route is almost 13 kilometers and/or 30 minutes. This is important information 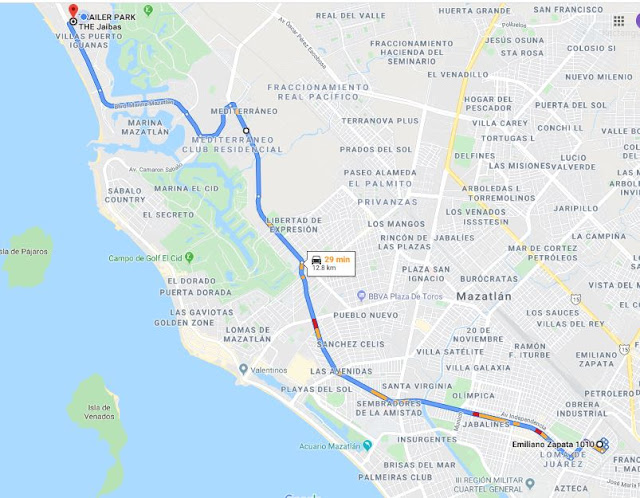 The painters shop. Taller means shop. Not that the painter is taller. 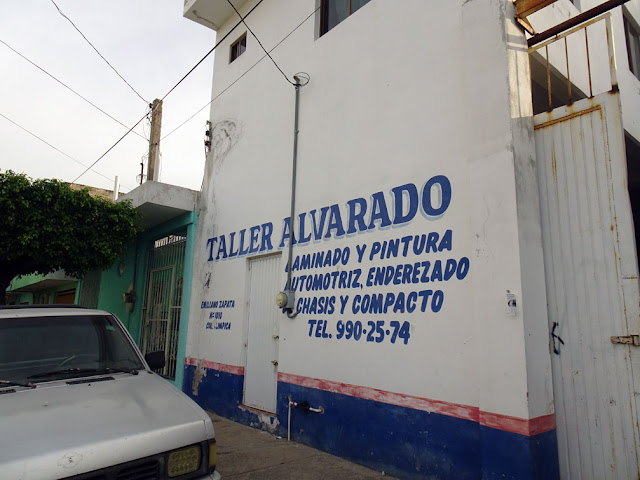 No other cars in here this time. Worker sweeping out the area. 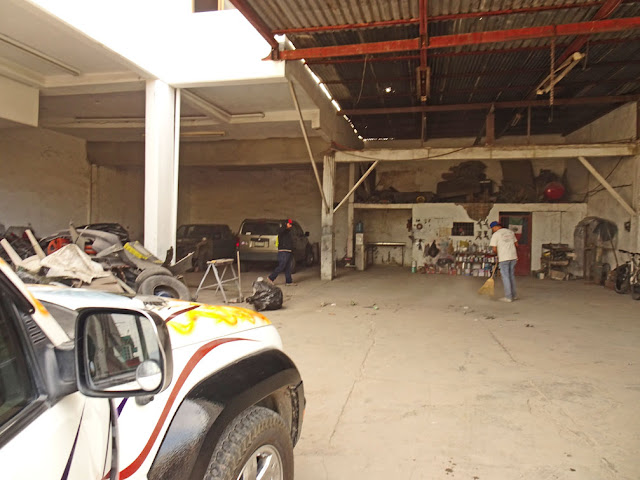 Leaving the Jeep behind and walking to the major street to catch a ride home. What ever comes first - bus, taxi or Pulmonia. Well a Pulmonia came first. 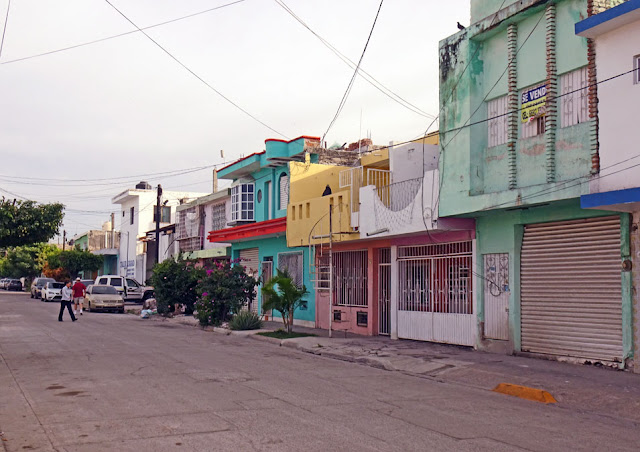 DON'T EVER GET IN A PULMONIA WHEN THE DRIVER IS WEARING A SEAT BELT. 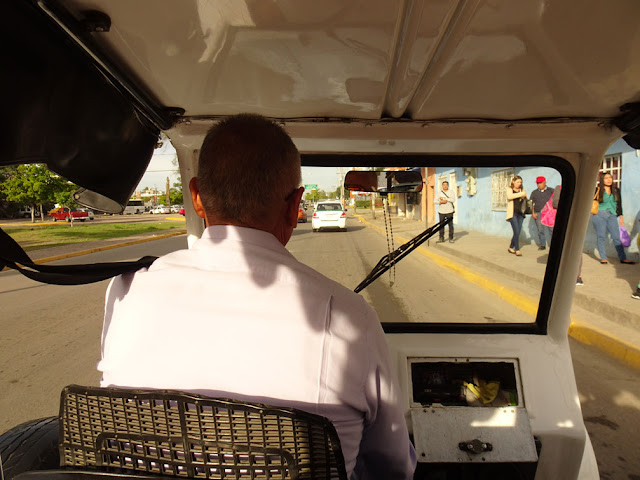 Why do I mention seat belts, well because most Pulmonias do not have any seat belts. In fact they also don't have any doors. Notice he also has a Rosary hanging from the mirror and a religious picture in his glove compartment! Why is this important. Because we made it back to the RV park in about 15 minutes. What a ride. Remember no belts, no doors and no Oh Sh** Bars. 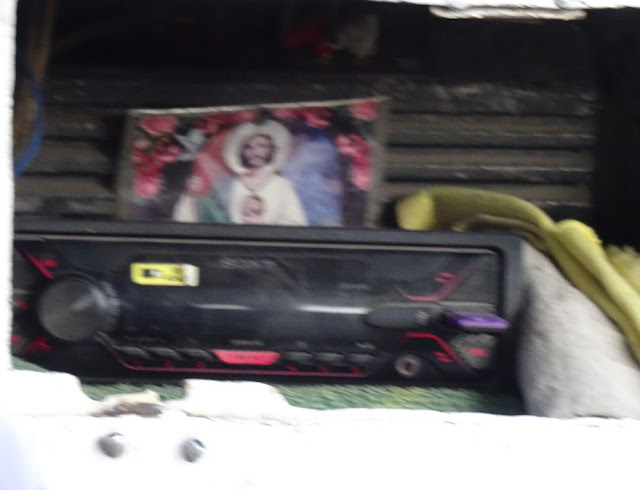 Just some pictures I managed to take while moving at warp speed and trying to hang on. This is a school. 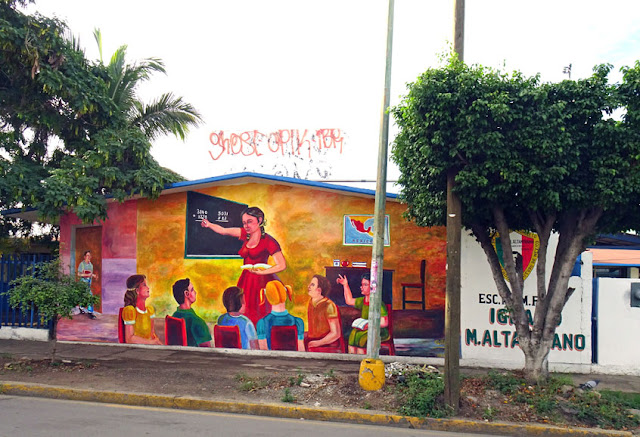 He looks like he is moving as fast as we were. 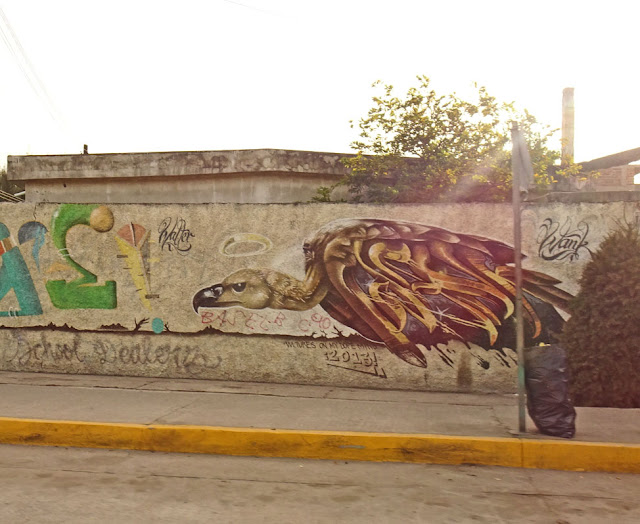 An open air vegetable market right next to the street. 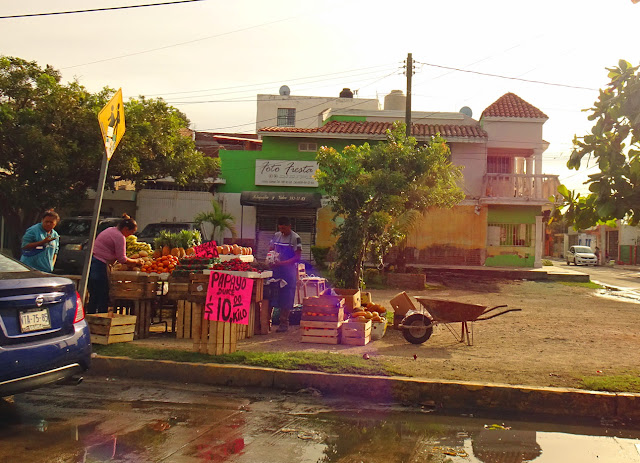 Some interesting murals, don't know what they were on - looks like a wall of some kind. 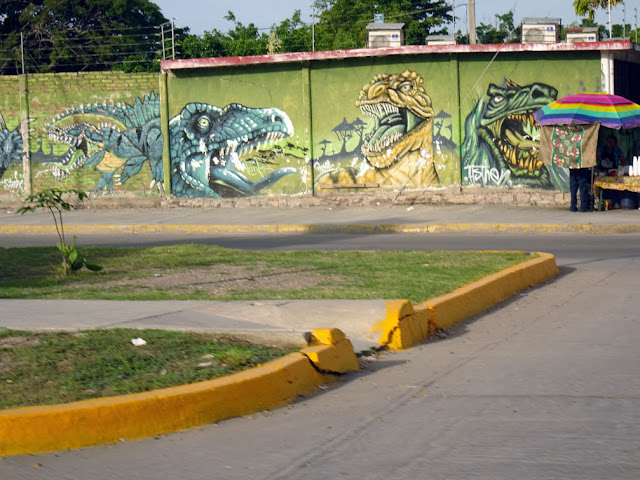 This policeman was controlling the signal light at this corner. 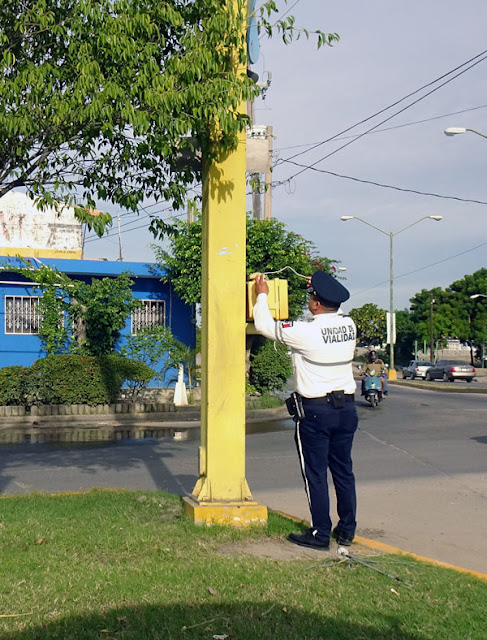 Looks like he forgot what he was doing, just standing there looking into space. Button is hanging off the box. 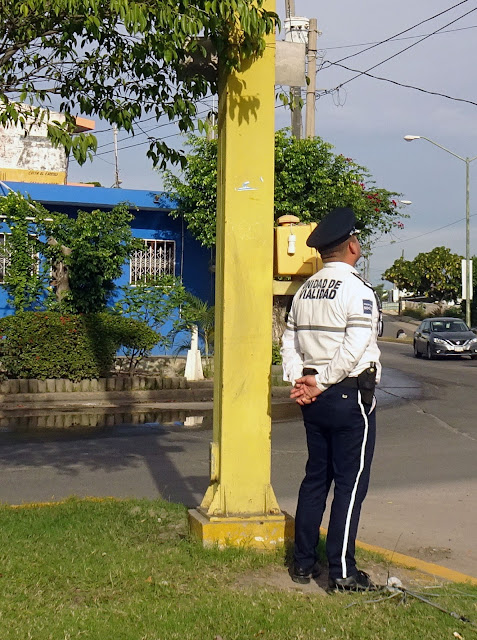 Looking out the side of the Pulmonia - no doors. 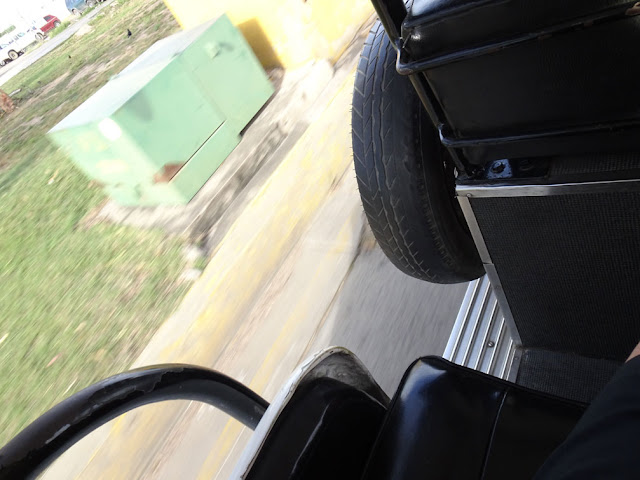 Here is a video of part of the ride. It is about seven minutes long. At one point there is a glimpse of my left hand glued to the side rail of the  seat. The scenery is flying by.

Pulmonias are only used in Mazatlan. They were first built here. There is a great article about them with pictures of the very first Pulmonias. And why they have that name. Click here to read it. Well worth it.
We arrived home in one piece. I am not implying that the driver was reckless or unsafe. His driving was excellent. Just have never - well I did once years ago - had such a quick ride in a Pulmonia. 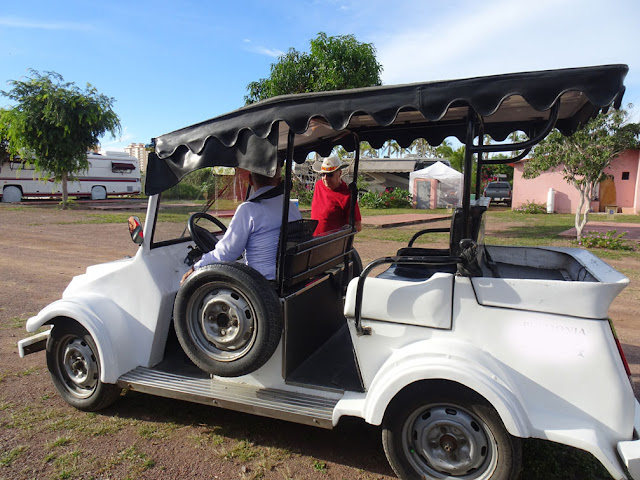 We took a taxi for a leisurely ride over to the paint shop this morning. I have no idea what it will look like when finished. Bill explaining something to the painter Jamie. Jamie suggested I keep Bill at home until the car is finished... 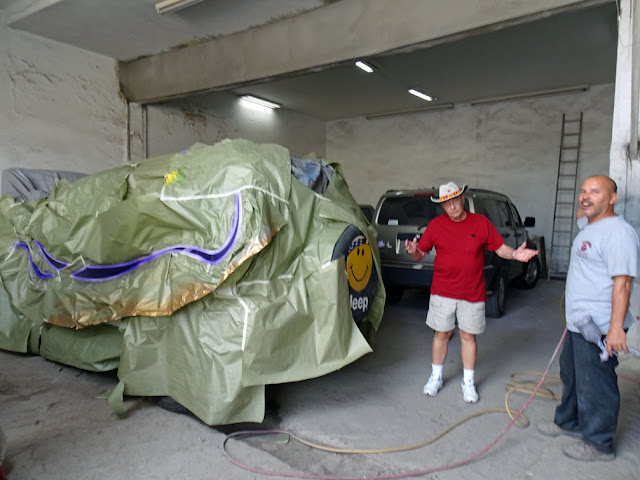 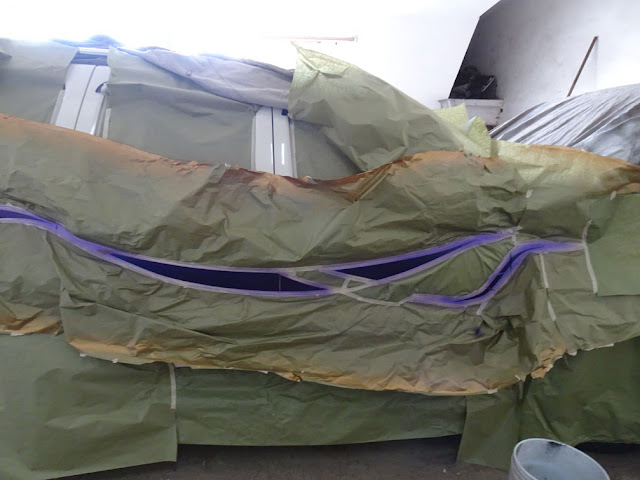 Checking the graphic color outside in the sun. 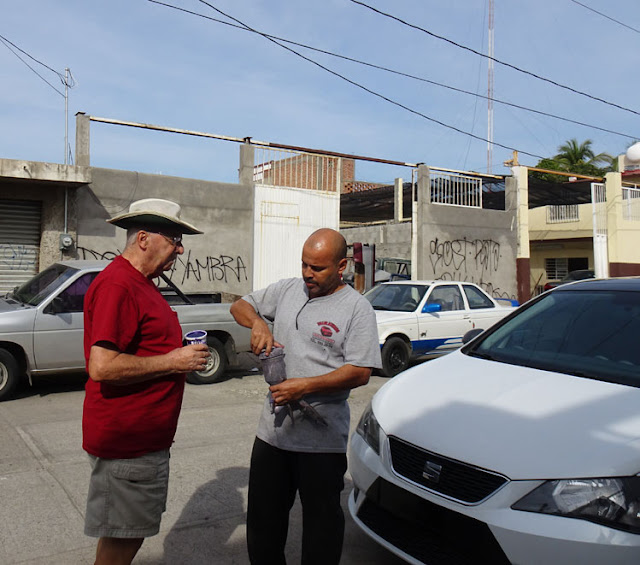 Putting on another coat of the purple? Blue? Blueish purple? 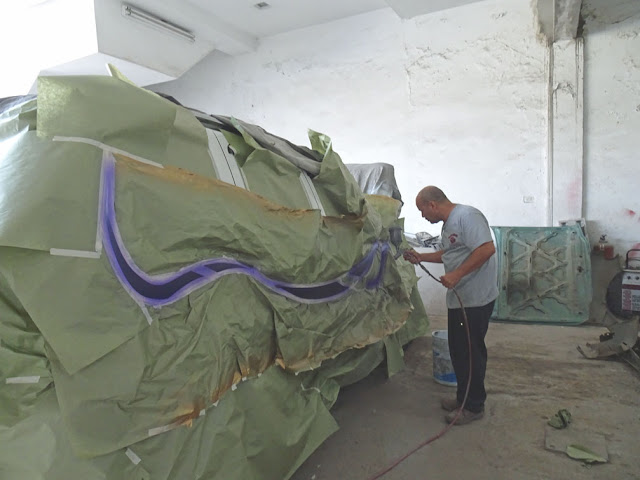 I did take before pictures.
Posted by Carol and Bill at 12:54 PM

I've seen Bill drive (aka..Speedy!)..so if you say the pulmonia was going at warp speed he must have been really flying! 😂