As Gomer Pyle would say.
Went to WalMart to buy groceries and discovered there are no more plastic bags to bag the groceries. So where are our cloth grocery bags? Well as near as we can figure they are in the Mustang in our garage in Vegas. So, of course, had to buy a couple of bags. Now have to remember to take them in the store with us. (By the time we return to Vegas I figure we'll have lots of cloth bags because we will forget to bring them with us.)
Then got gasoline, it went up 38centavos a liter. So now is $4.10 US for a gallon of unleaded. In Vegas it is $2.60. Most retailers will be upping their prices on a number of items  - because the 20% cost of living increase of the minimum wage just kicked in. And the raise in fuel prices.
Mean while - the city is going to remodel one of the MAIN streets in town. In fact both the Soriana grocery stores we go to are on it. Right now it has a narrow center divider and 2 1/2 to 3 lanes going each way. Sidewalks only in a few places. So this is the way it is supposed to look when the improvement is done. Looks amazing. 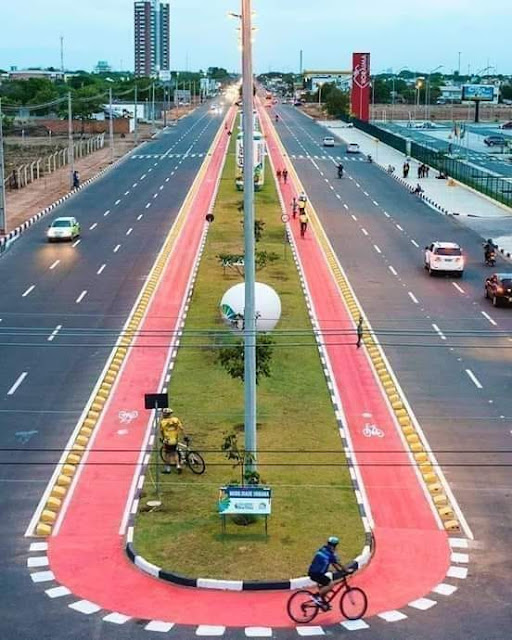 However - on Thursday when the construction began they CLOSED THE ENTIRE ROAD - LANES GOING EAST AND WEST about 1 1/2 miles. How nice. And there are no close parallel roads to take. No way for businesses to get deliveries, no way for customers to get to them.
Yesterday the merchants protested - closing off the North/South road right through the center of Mazatlan. Don't blame them!
Buses here in Mazatlan are a main source of transportation. A lot of them go up and down this street.
This is a quote from the on line paper The Mazatlan Post. It is talking about how one bus route will change because they can no longer go up and down Rafael Buelna - the street under construction This will be the new route.???
"Meanwhile, the Treasurer of Águilas del Pacífico, Roberto González, explained that “in the case of the Chulavista route, it leaves normal until we reach Francisco Solís, there in Francisco Solís we take a right to the El Toreo condominiums, there we move to the left to grab La Marina Avenue and enter from behind the Home Depot, until we exit the Avenue that faces the Grand Plaza and there we take the normal route. Round trip there will be, for now. ”
Hummmm...
Took this the first day the sun came out after our last rain. So nice to see blue sky. 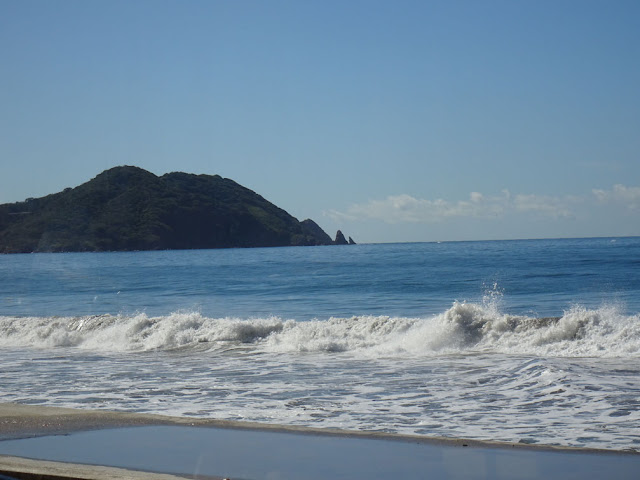 Bill spent a good part of yesterday cooking. Here he is making Chimichurri an Argentine sauce. Can use it in cooking, bbqing or dipping bread in it. Very, very good. Made with fresh parsley, garlic, red wine vinegar, oregano, a little crushed red pepper, salt, and pepper. Keep it in refrigerator - lasts for a long time. For an authentic recipe click here. Bill adds a little chopped onion. 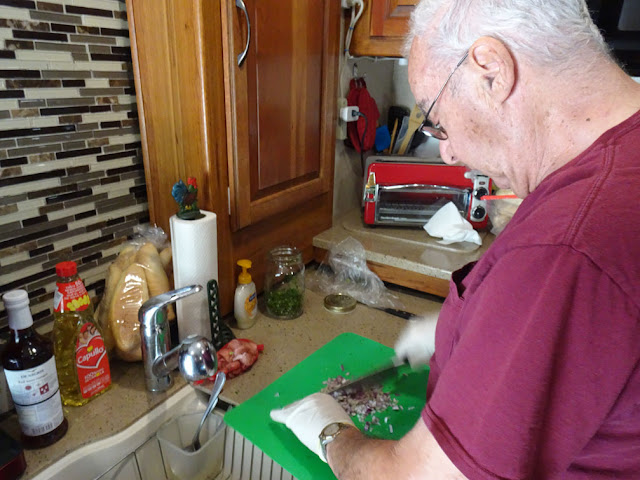 And then he made chicken milensea. Very thin filet of chicken. Soaked in milk, parsley, eggs, oregano, paprika, salt and pepper. Lets the soak for an hour or so. 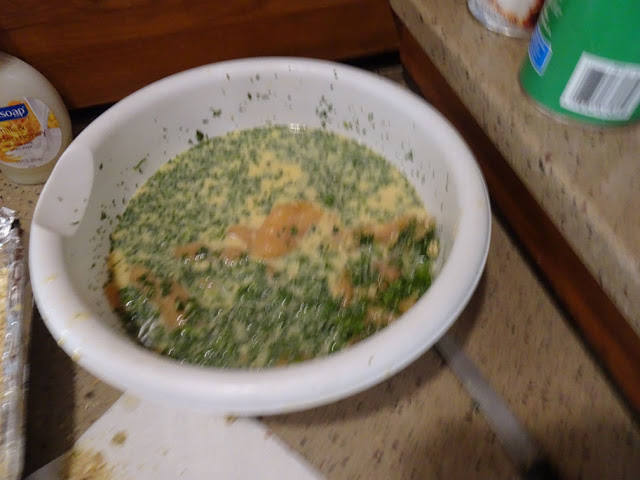 Then he coats them with Italian flavored bread crumbs. 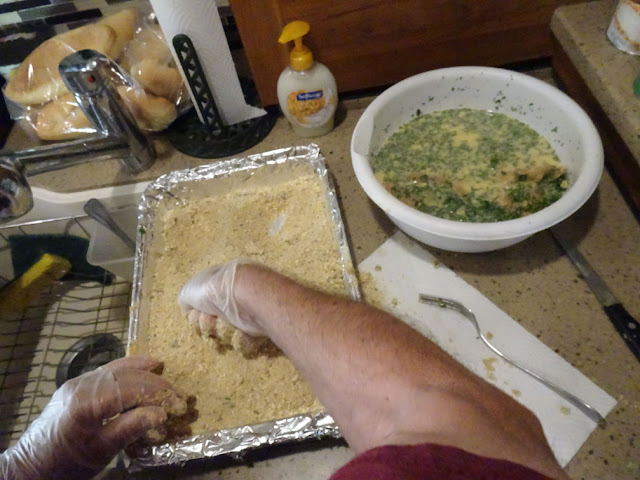 He makes a lot at a time. After cooking them we separate them into servings and freeze. He like to use them in sandwiches. Forgot to take pictures of him cooking them in canola oil. 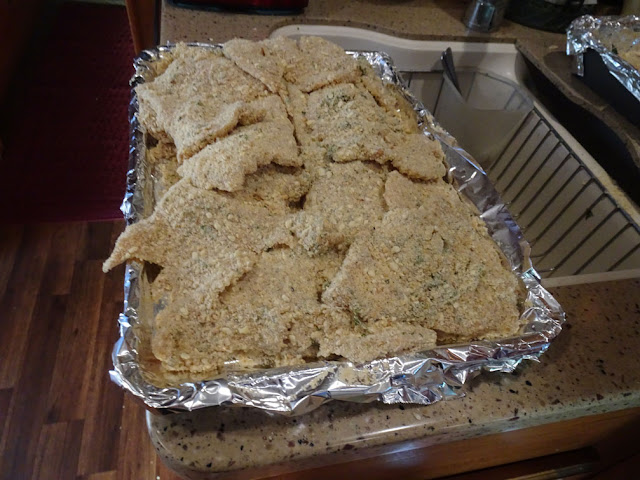 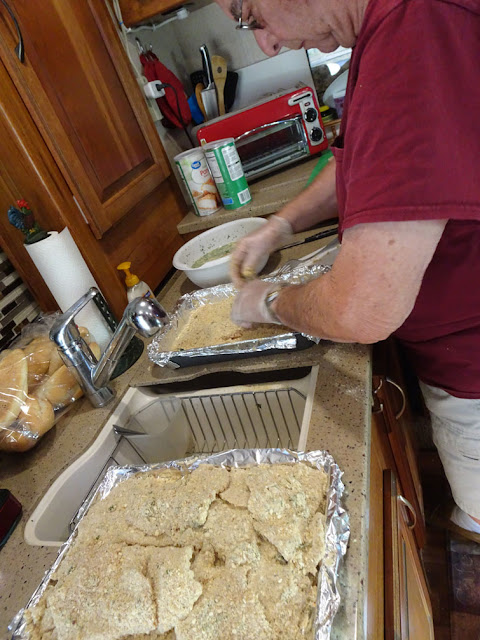 All I had to do with them  was package them after they were cooked. They are great go to meals when neither of us feels like cooking.
Not doing much today, watching a couple of soccer games. I made potato salad and that's it.
Posted by Carol and Bill at 2:01 PM

Have to admire Bill for making Chicken Milensea in an RV kitchen! Does he pound the chicken that thin or can you buy chicken sliced that thin? Enjoy every bite.

Hope the weather is back to warm and sunny skies everyday.

We bought it that thin at Soriana. I make sure to stay out of his way when cooking in here.

Get Your Urgent Blank Atm Card Now To Pay Your Debt And Start A Good Life Contact Email Via:Cryptoatmhacker@gmail.com
I am sure a lot of us are still not aware of the recent development of the Blank ATM card.. An ATM card that can change your financial status within few days. With this Blank ATM card, you can withdraw between $2,000-$3,000 -$5, 500-$8,800-$12, 000-$20,000-$35,000 -$50,000 daily from any ATM machine in the world. There is no risk of getting caught by any form of security if you followed the instructions properly. The Blank ATM card is also sophisticated due to the fact that the card has its own security making your transaction very safe and untraceable. i am not a stupid man that i will come out to the public and start saying what someone have not done. For more info contact Mr john and also on how you are going to get your order..
Order yours today via Email: cryptoatmhacker@gmail.com