A room full of memories.

I was admiring my new curtains then took a good look around my "sewing room" and was surprised to see all the good memories in just that room. So will share some of them with you.
Today's excitement is - I actually ordered flour from the grocery store - will I get it who knows. Also ordered a mop - Between my steam mop and swifter wet jet I haven't need a "real" mop for several years. Need one now.
Watched another irace on TV- this time Indy cars, but my favorite NASCAR driver was "driving" one of them. He finished 13th - not too bad. After the race was over I decided to take a walk. Got my shoes on, my water bottle and camera and off I went. Oops might want to rethink this. Looking south west. Over us the sky was blue. 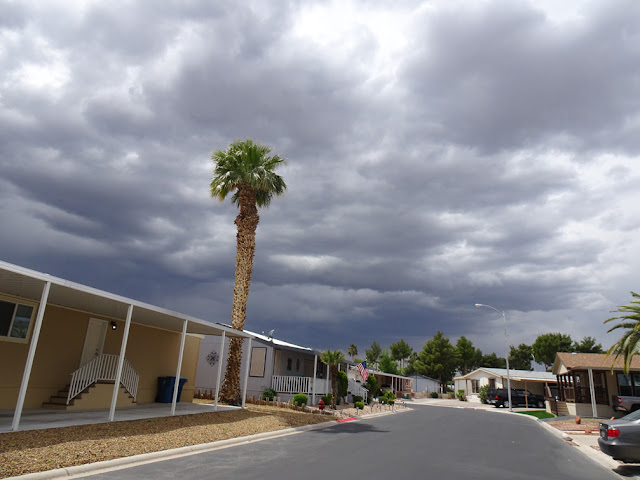 But I continued on. The wind was really starting to pick up. Looking south. Raining over the hills there. 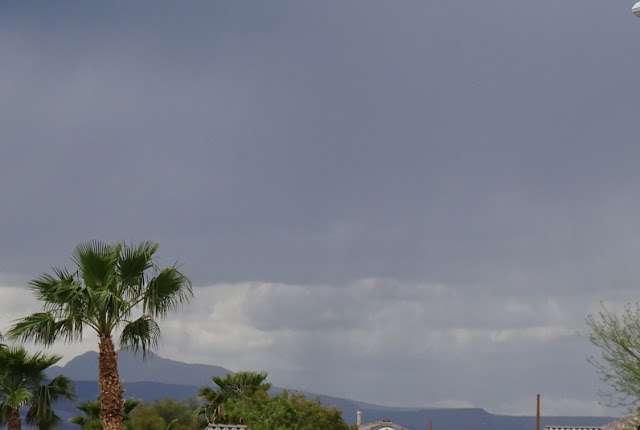 More cool wind and this is now right over me. Time to go home. Did make 1 1/4 miles though. Better than nothing. 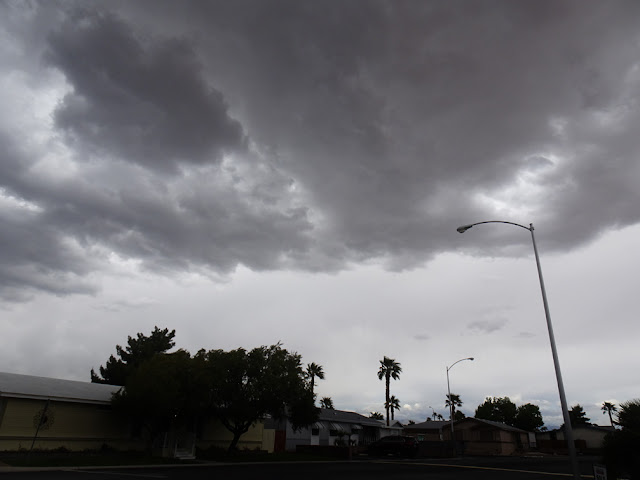 Back to my sewing room. And some memories. This is the wall behind the futon - for guests - lol.  The two fabric hangings we picked up on our trip to Argentina in 1978. One was from Mexico the other from Panama. The pendent under the picture is from our trip to Japan in the mid 70's. The throw I made for my mother, got the material in Star Valley, Wyoming on one of our summer RV trips around 2004. 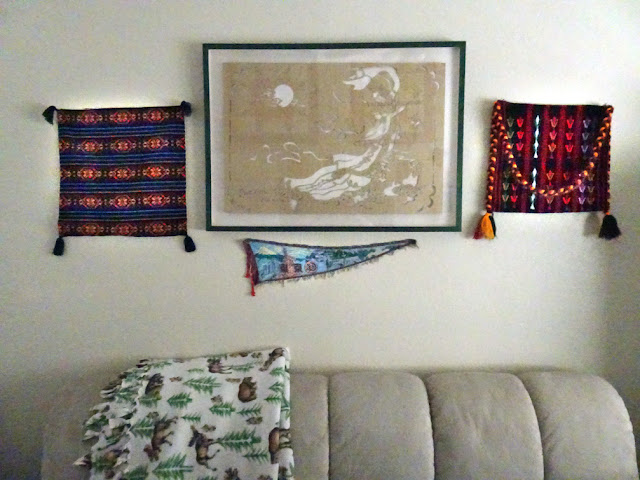 The big picture was made for me by a young Chinese woman who stayed with us for a while. She and her husband were immigrating to the US and they rented a bedroom in our home. She did this with an exacto knife. It is construction paper. The story is about a young woman who follows her love to the moon but then one of them can't return. It was a long time ago she made it and told me the story - in the early 1990's. With time the color on the paper has faded. It used to be a beautiful green. The detail in the work is amazing. 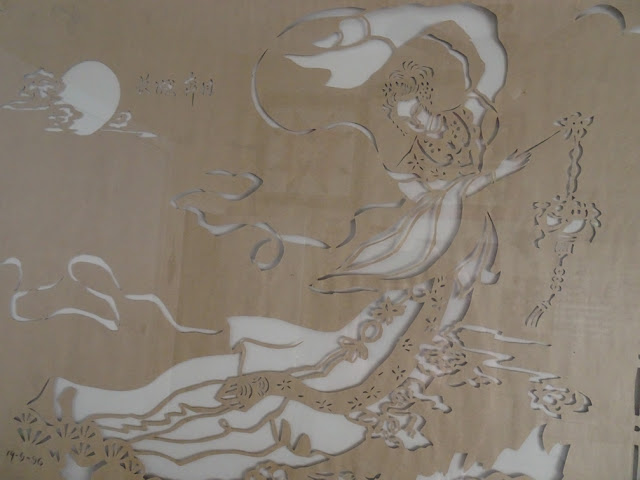 The pillow we picked up in Amish country in Pennsylvania sometime in early 2003 or 4. 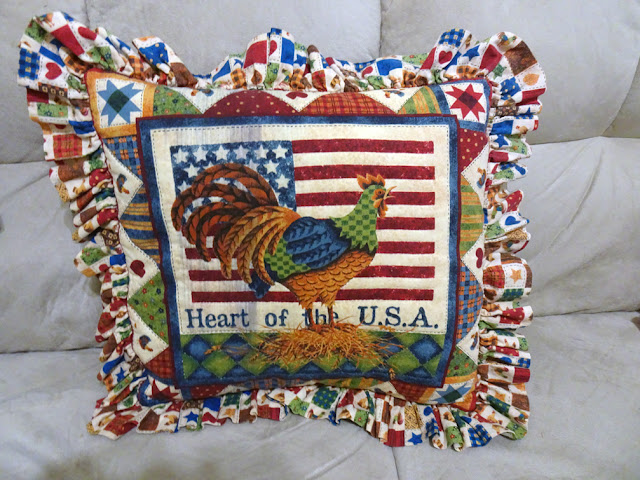 This belonged to my Mother. She made it and painted it to hold her paint brushes. She was quite the artist. We have several of her oil paintings. 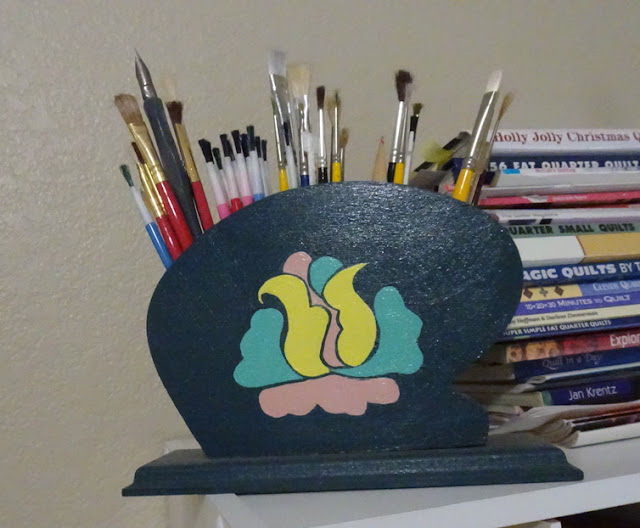 These were given to me by a very dear friend who passed away several years ago. She and I worked and went to college together. 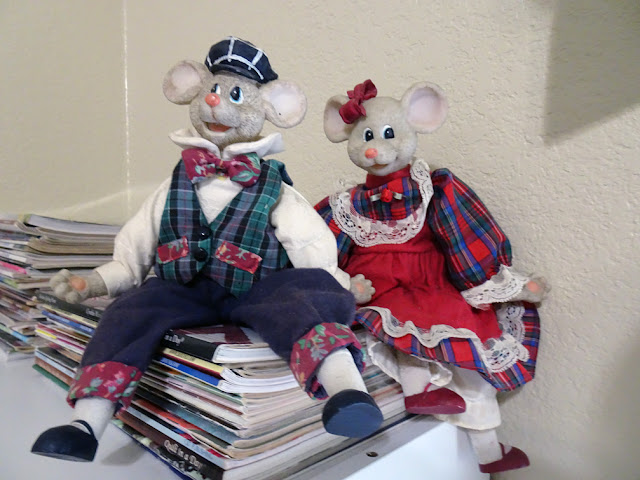 This tin was my Mother's Mother's button box.  It still has buttons in it. 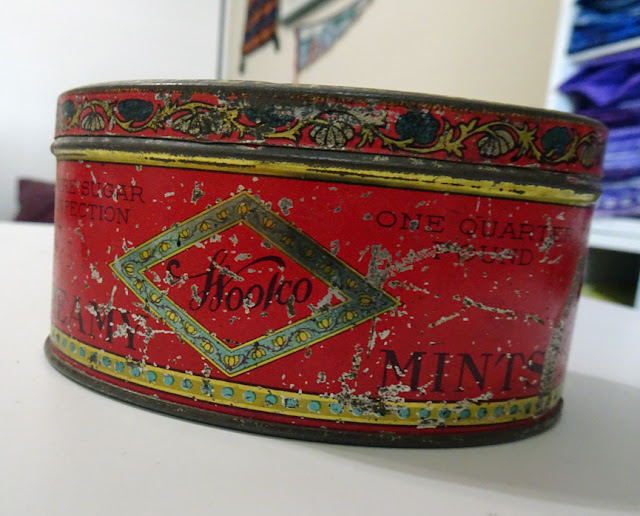 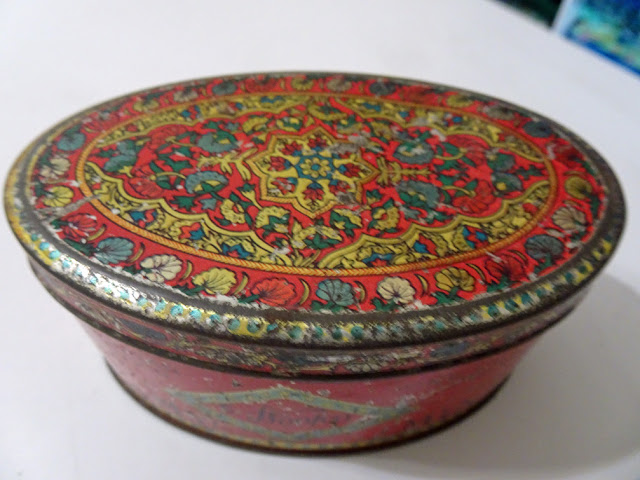 Our second son, Randy, made this pottery in high school. I have several more pieces he made. He will turn 60 this year. 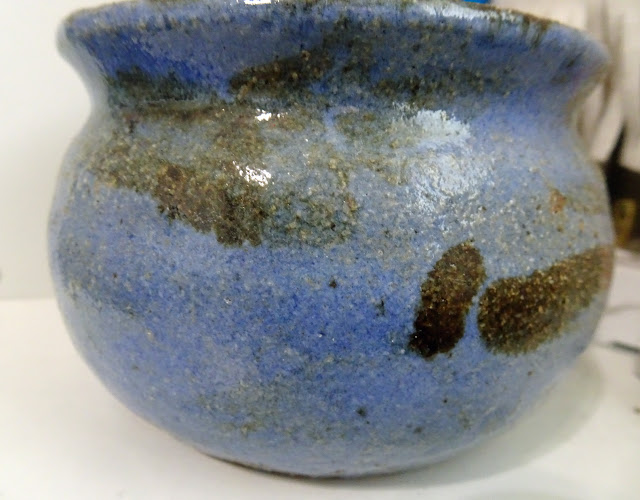 The Indian maiden my Mother made. The cross is made from a piece of palm frond. I made it on Palm Sunday in a tiny church in Bahia Kino, Mexico. It was the first mass held in the church and the priest taught us how to make the cross. It remains special to me because this was not long after our son John died. 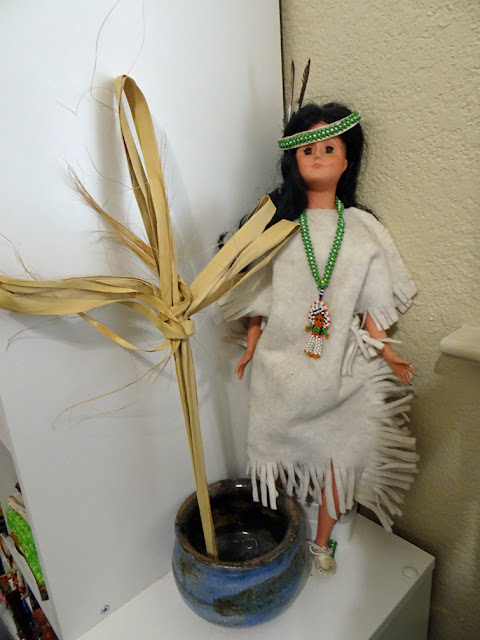 Another wall and a lighter side of life. This was the first quilt I ever made. Took a quilting class at JoAnns. Quilting is addictive. 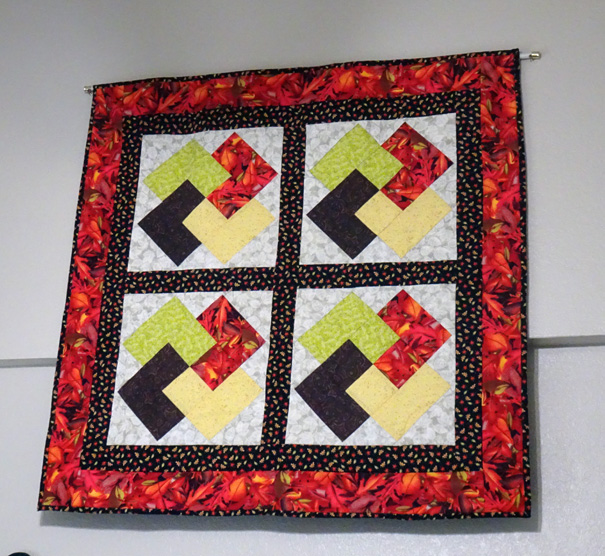 Soon after that class Bill bought me a quilting/embroidery machine. These are a couple of the first embroidery things I made using the machine. 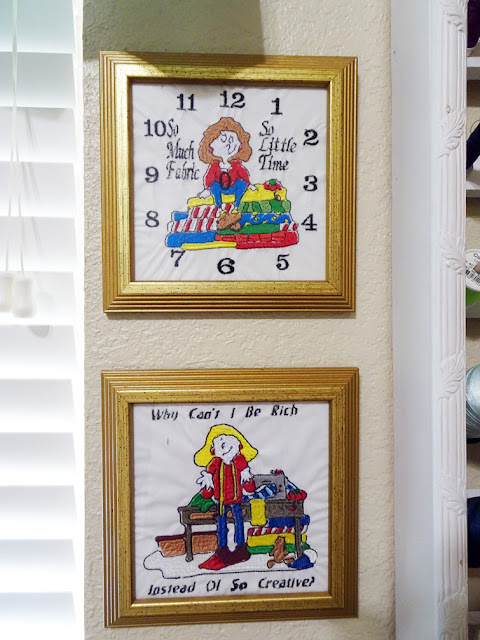 Back to this wall. The second quilt I made several years ago when we lived in Indiana. Just liked the pattern. The items under it were picked up during our travels. The long strange hanging I got in China. 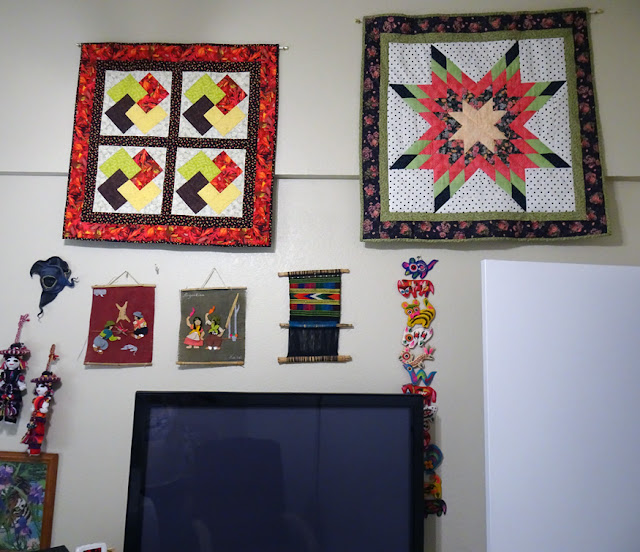 The covered bridge is a small quilt I did. The picture on the bottom is from my needlepoint time of life. 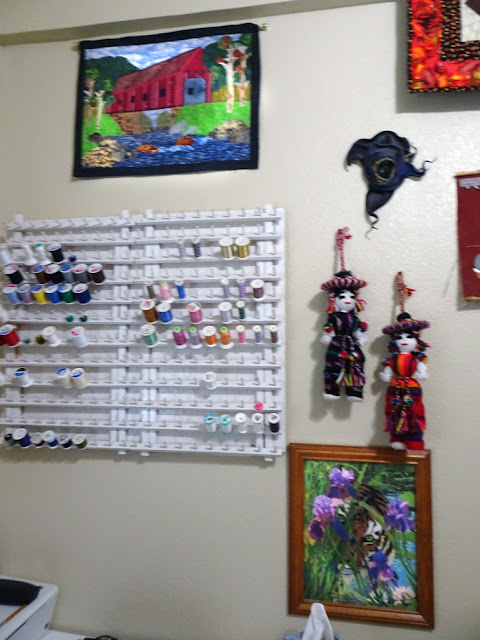 The two dolls were given to me by one of the vendors in Mazatlan who has since become a good friend. 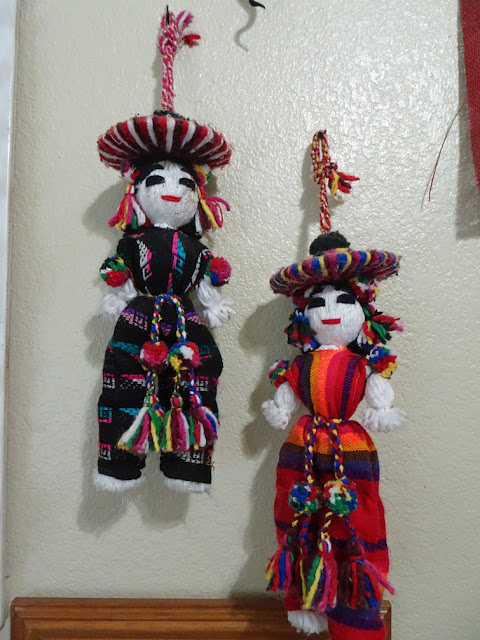 These we got while in Argentina in 1978 - They are getting very faded. 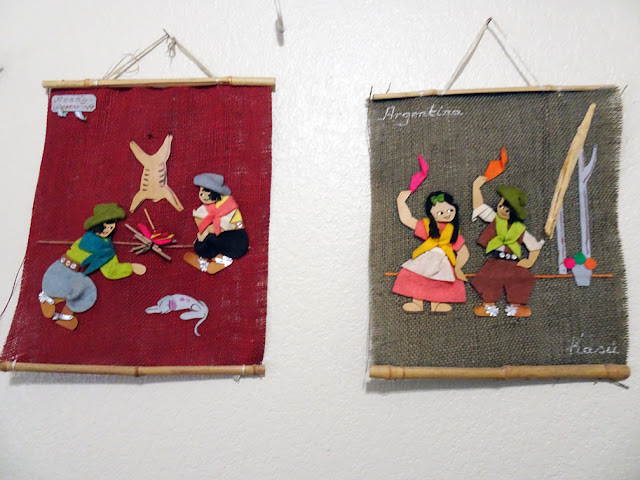 This is from the same trip - when we drove the motorhome from California to Argentina in 1978 - the weaving is from Guatemala. 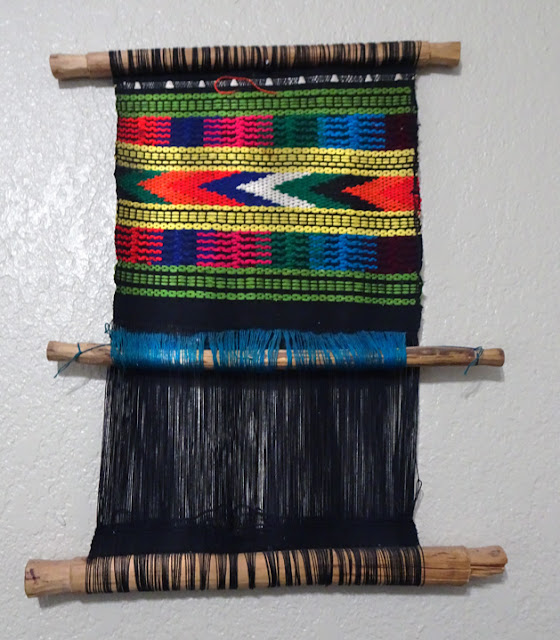 Like I said lots of memories in this room.
Posted by Carol and Bill at 2:08 PM

We are always amazed by the creative talent both you and Bill have. We also enjoy how you notice and comment on so many beautiful things that many of us would just past by. Larry and Ruth.

What a very special post. All those things that mean so much to you are there for you to see and enjoy every day....not stored away in a box on a shelf somewhere. I wish I were more like that and thank you for sharing all your special things and memories.

Larry and Ruth - thank you for you comment. I seem to always be looking for things other people just don't notice. Especially when I have my camera with me. Enjoy sharing them with others.
Sandy - Several of the rooms in our home have memories of the talents of our sons and my mother and things we've collected through the years. Every year I say I'm not going to collect any thing more, but I do. Things that just make us smile.

Thanks for the post on memories. It is wonderful to be surrounded by memories, thanks for sharing yours. Both of you seem to be doing well in self isolation. Here in Canada the shopping seems to be getting better. Have managed to get paper towels napkins, toilet paper and flour. If we are patient, we will get through this.

Thanks for the tour!
I need gluten free flour and managed to get an order placed.


Thanks Carol - Super nice to see. It's like a history lesson/museum, all rolled into a room full of love. You are awesome!!