A normal day in the life of...

Was up this morning at 4:30 so got to see the pretty sunrise.

We are starting to get into the routine of daily life here. But first an up date on a few things, My poor little deformed finger that I fell on in San Carlos still hurts now and then but at least not all the time any more. I can even use it typing for a while before it complains. It is still kind of red and bruised but that too is getting better.

On Saturday the RV tech here, Eric, came by to work on John's 5th wheel and Bill had him come over to look at the two drawers that the first mobile RV guy in Arizona screwed up when he was working on the water heater. He took them out and when he put them back in he knocked the rails they go in and out on off. So the drawers would no longer go in. All fixed now. Also found out why the front door sticks some times. The hinges are loose. Maybe something the thieves did when breaking in.

Here is the weather report for the next few days. Continues to be hot and humid and not cooling down too much at night. The humidity is in high 70's - low 80's. Not used to that. I sit here typing and break out in a sweat. So not doing and walking around much. The percentages on the right are chances of rain. Pretty low but when it is so humid it almost feels like rain. 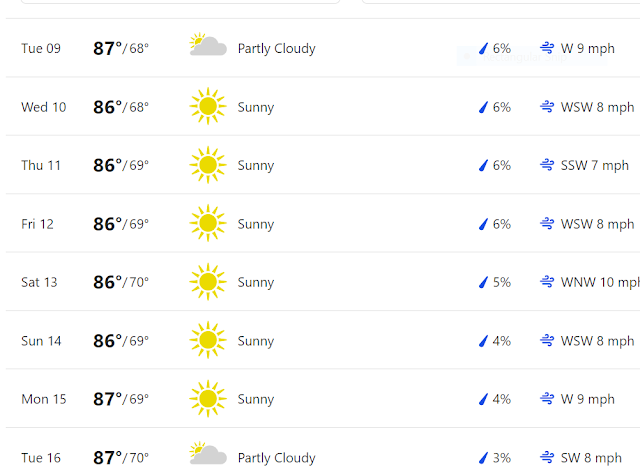 Yesterday we took a trip down town to the grocery store. Exciting right - not. To get in you must have a mask on, have your temperature taken and walk through sanitizer.

Already getting ready for Christmas. Picked up a few things and realized we had not brought our bags in with us. So now we own ANOTHER bag. Got to remember them. Our grocery purchase was $355.65 - Wow! Always a shock the first time until you start thinking in pesos - then only US$17.48.

Back home. A lot of different things around the RV park. Two new restaurants a seafood and sushi place and a Taco Time -it seems to be a chain. The Seafood place is busy, cars are parked all over the place, some even inside the park.

And just north of the is a big new pharmacy. It is built in front of all the new homes that were built a couple of years ago.

In the center medium the bike path is finished. All the way north to the ocean.

Nice little yellow topes to slow the cars down while going over the bicycle path. 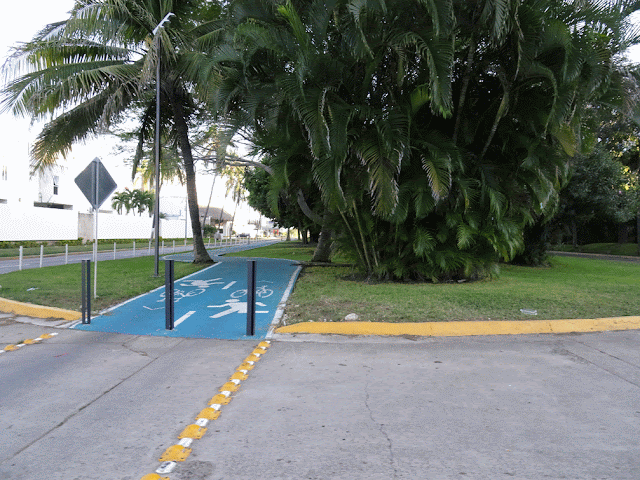 We drove up north to the end of the road at Cerritos. Boy was it busy there. Even had a new parking lot for cars and it was full. Lots and lots of tour buses there too. Looks like the restaurant at the end has added a new eating area.

The cotton candy man. No parking available by the shops.

Roys Restaurant was full. Cooking up a storm.

On the way home we stopped at Torres across the street for an early dinner. Saw a couple of the iguanas.

We both had chicken fajitas. Very good. We both ate too much.

Last night we decided to watch some TV to see how many GBs it would consume. Only watched about a half hour and according to my meter it didn't use very much at all. Wondering if it was because we were using Bill's laptop so the usage doesn't show up on mine. Guess I'd better check that.
Posted by Carol and Bill at 10:40 AM