Flowers and Plumas and Sunset!

The rest of our trip to La Martina. Driving home from La Martina, just some of the colorful flowers blooming along the highway . 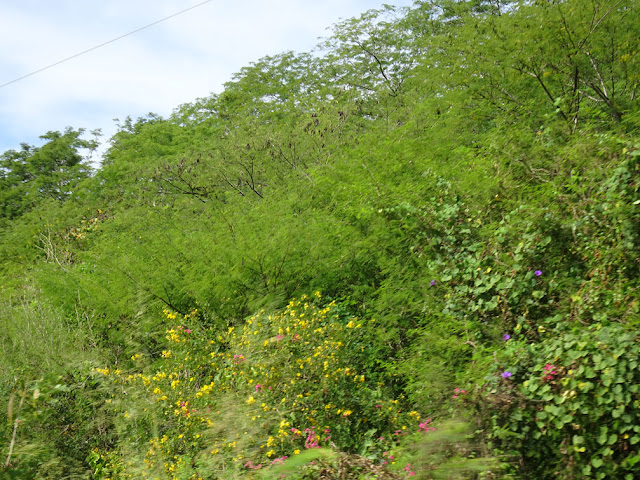 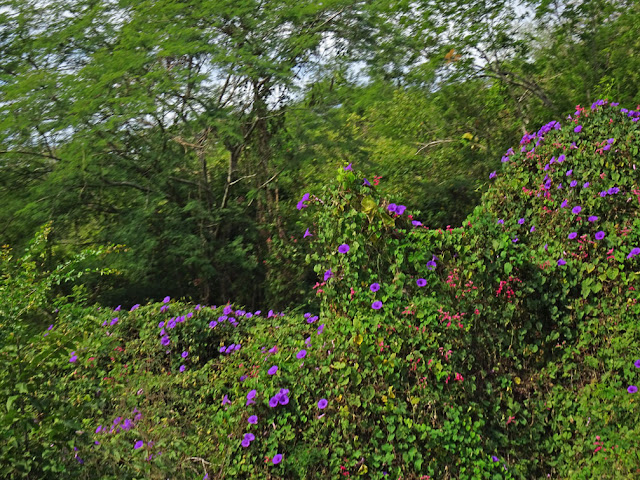 Back on free road 15 - the signs warning that the road is closed to through travel. Locals only. Because of the bridge that is washed out. Yet people have driven right off the broken bridge and ended up in the river... 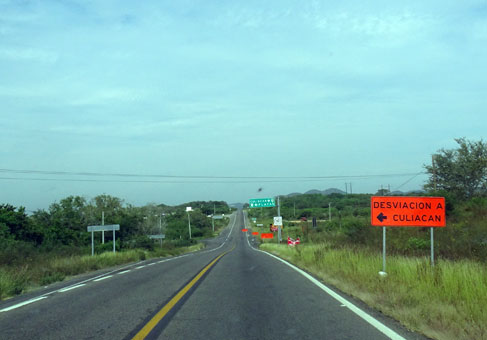 Heading down towards the ocean we were surprised the other day when we got here to see that the railroad crossing finally had lights and barrier arms - plumas. Years, 6 or 7 years,  ago after a bus was hit by a train at this crossing the lights and arms were supposed to be installed.  Every year we wondered where are the plumas? (In fact a few years ago when we were at a birthday party we talked to the soon to be mayor. He assured us that would be one of the first things he did. But by the time he took office the money designated for the plumas had disappeared!) By golly this year they are here! We could see the flashing red lights and as we got closer could also see the arm was down. We stopped. 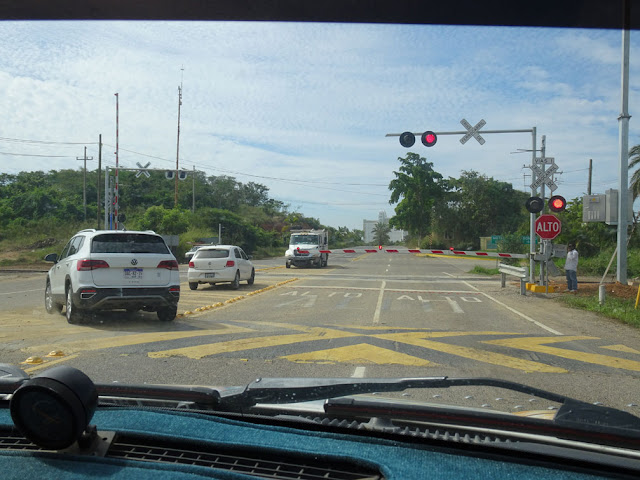 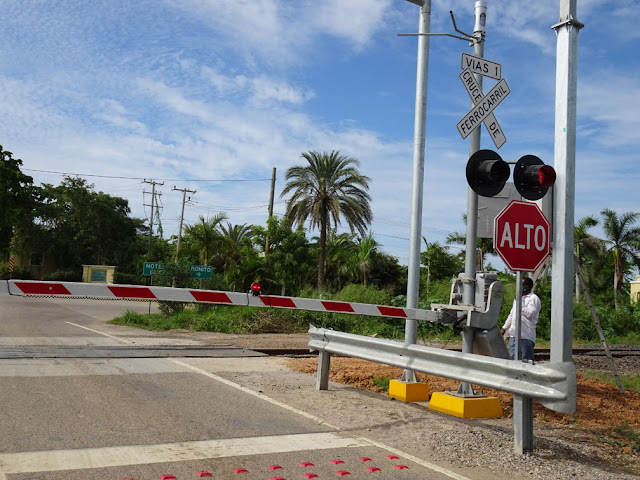 And stayed stopped looking for a train... 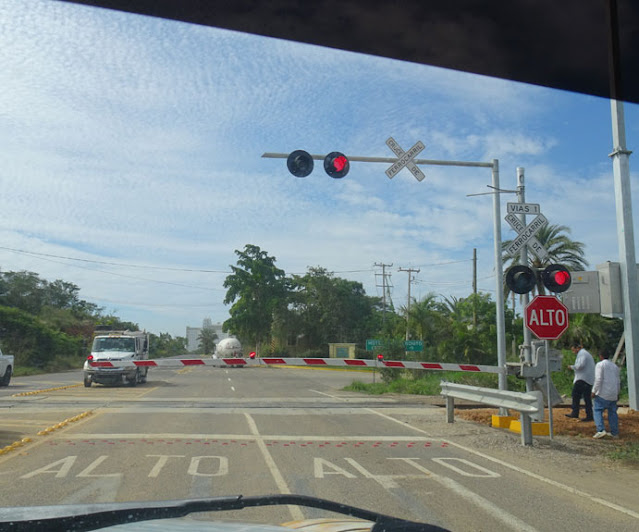 But guess we weren't supposed to stop. The two men on the right kept waving at us to go around. This was maybe the first time it was being tested??? I hope in the future people don't just go around them. This video is from the dash cam.
Also there is a new fountain at the round about at the end of the road where one turns left to go to the RV park. Very pretty. 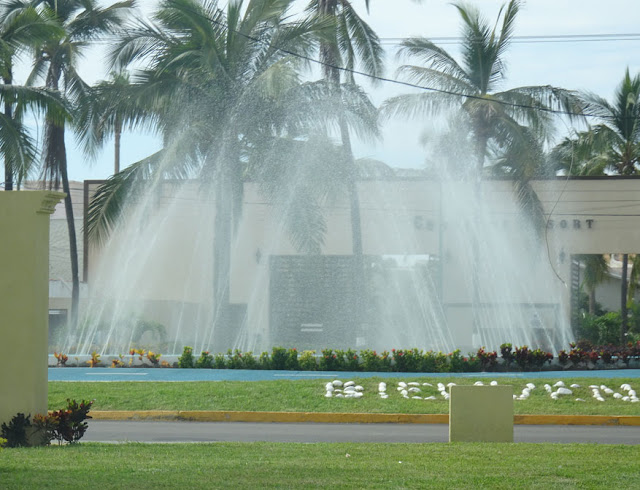 Later that afternoon we went out to the look out point by the light house to watch the sunset. 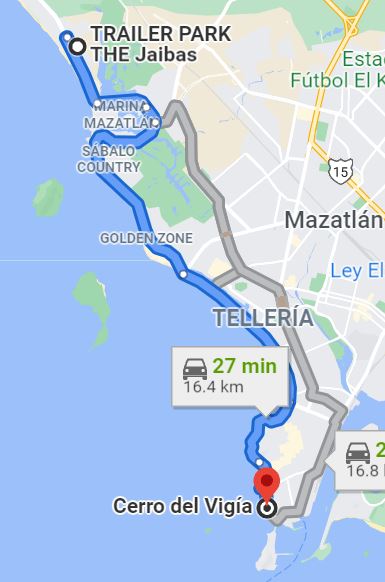 The observatory up on the hill. It is now open for tours. Including the ride up and down on the funicular. 49 minute tour includes a video about the observatory built in 1873. A visit to the bird sanctuary and the history of mezcal. And a great view. Prices for foreign adults is 450 pesos. Less expensive for children and local adults. 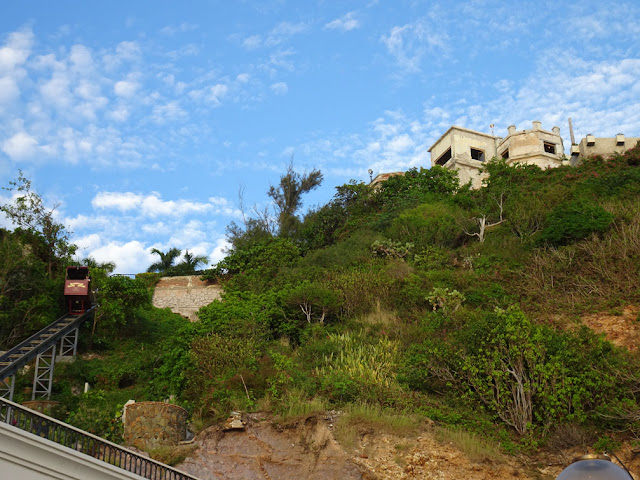 The funicular bringing tourists down to the main level. 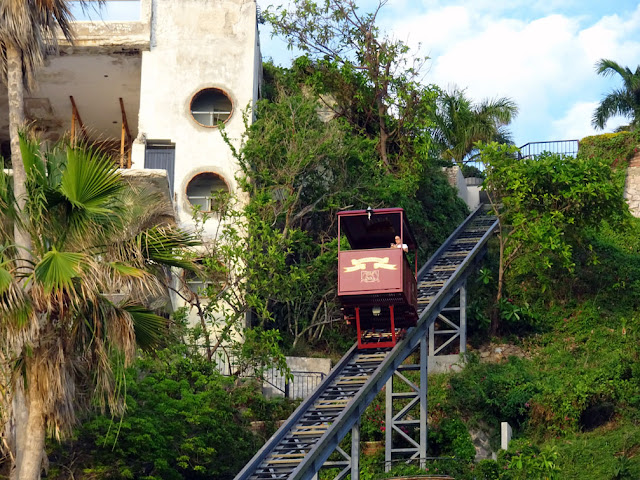 Not very much parking available, better to take a cab or pulmonia. 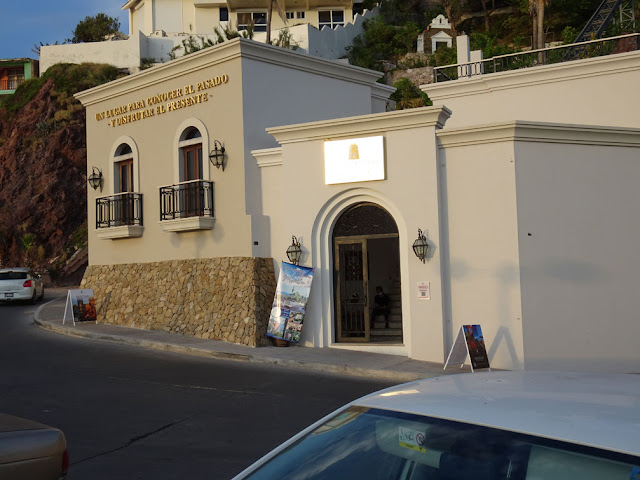 New painting on this home. 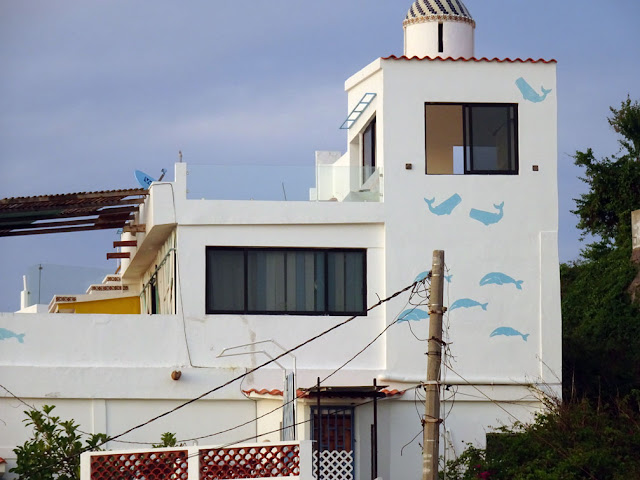 People out on the glass overlook at the light house. 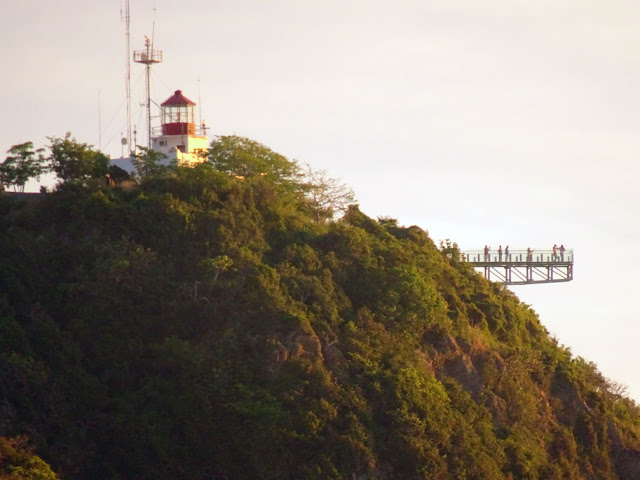 The beginning of sunset. 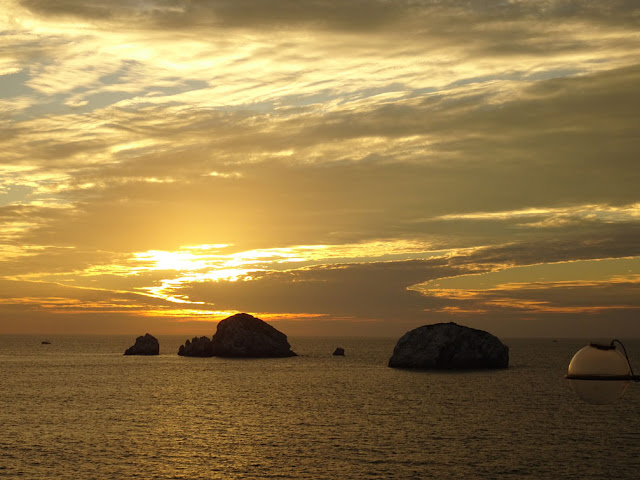 The sun right at the top of the big rock. Of the six light standards only one was working. See the unconnected wire on this one. Too bad, hope they get fixed soon. 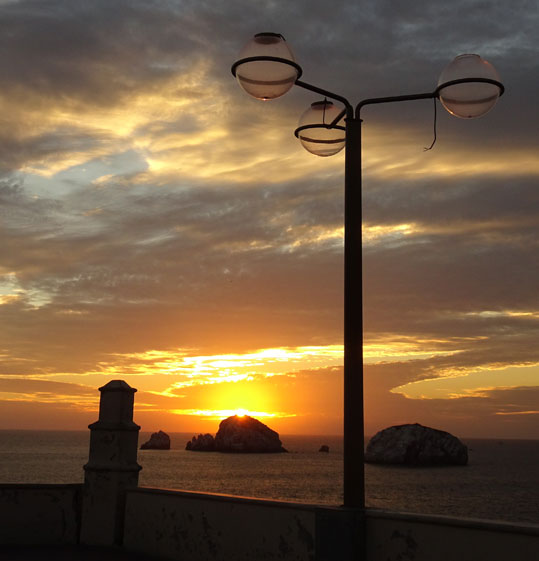 Getting a little redder. 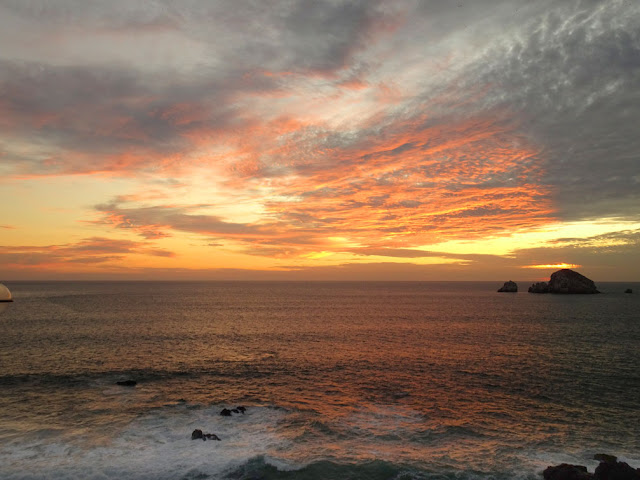 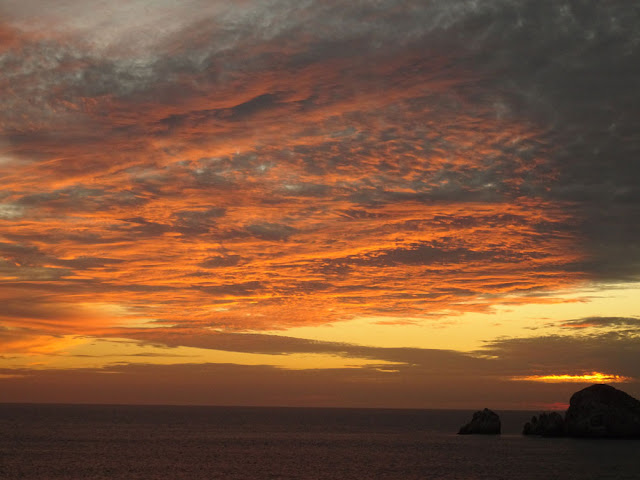 Yesterday, we had our yearly visit from our mobile mechanic, Pablo, yesterday. He changes the oil and filters in both vehicles every year right after we get here. 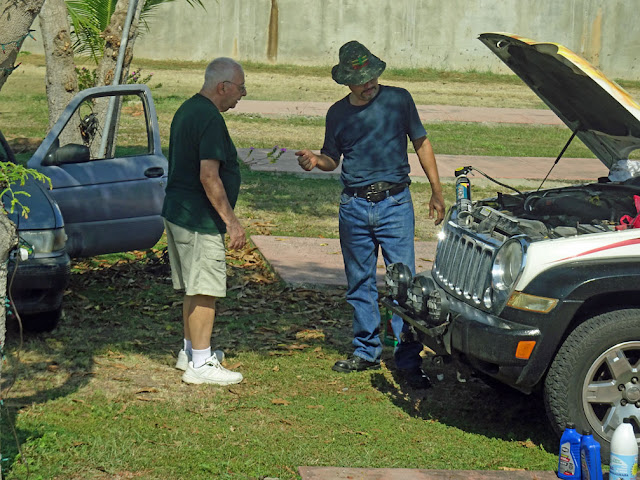 And the Jeep also needs a new radiator, guess it has been leaking for a while. So Pablo showed up bright and early and worked on Willie. He got a new radiator and a new water pump. So he should be good to go for a while again. 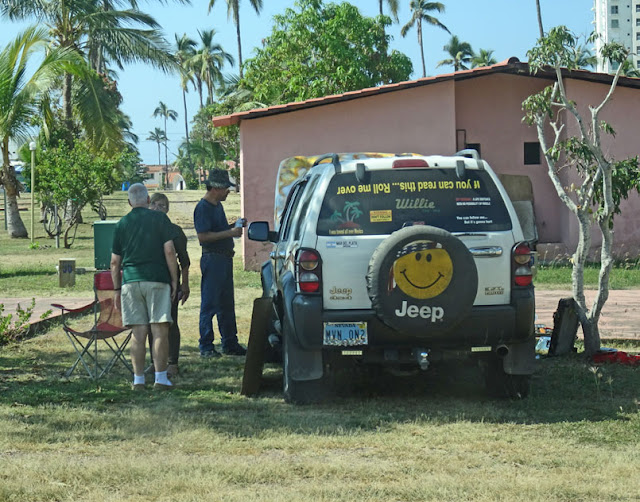 Bill working with his space station charging station for his drones. 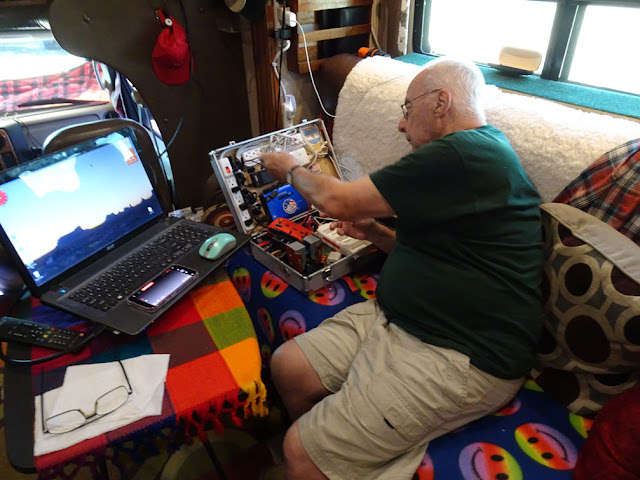 Other than a short drive up to Cerritos and a walk around the open shops we didn't do much. Oh, I did re arrange our food cupboards cause we couldn't find anything in them. And that was it for yesterday.
Posted by Carol and Bill at 1:55 PM

CLEANING AND REARRANGING CUPBO0ARDS ARE SO SATISFYING, UNTIL NEXT
TIME :)). LOVE YOUR BLOG AND ALL YOUR TRAVELS. STAY SAFE.

Thank you for your comment, always glad to know people are reading it. I know 3 weeks and the cupboards will be messed up again. Oh, well.