This is from the day before. Friday evening when we took the drone to the beach. Just a very short video from the drone. Guess it was watching the birds fishing.
Saturday, my actual birthday day we went out to breakfast for good French Toast and Bacon at Chihauhau's then on into Guaymas to do some errands.
There are about five guys out with weed whackers trying to do all the trimming from town to the main highway. It is slow work. 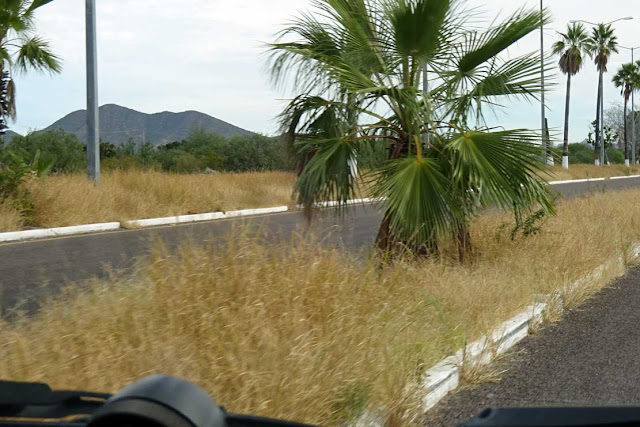 Speaking of slow, guess her business is very slow. Looks like she is catching up on her sleep. She is in front of a pretty big factory of some sort. 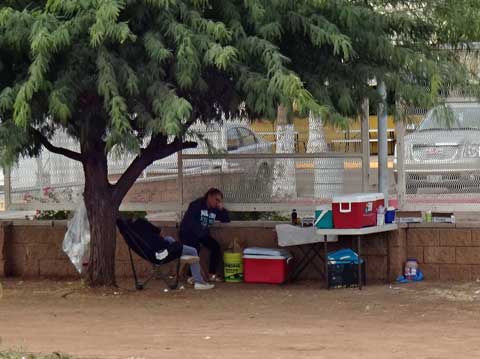 First we went into the new smaller Ley Supermercado. Bill was looking for his favorite sandwich rolls. Nice produce section. Sugar Cane, Peanuts, Plantanos and a bunch of stuff I've no idea what it is. The prices are in Pesos - 32.90 about US$1.70. The first grocery and gasoline receipts of the season are always WHAT! 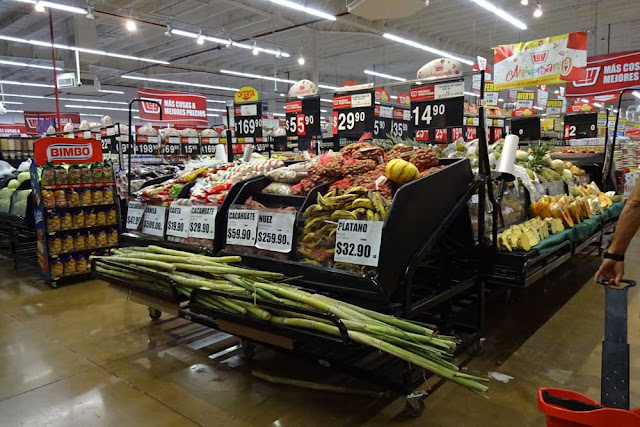 How about some octopus? Fresh. 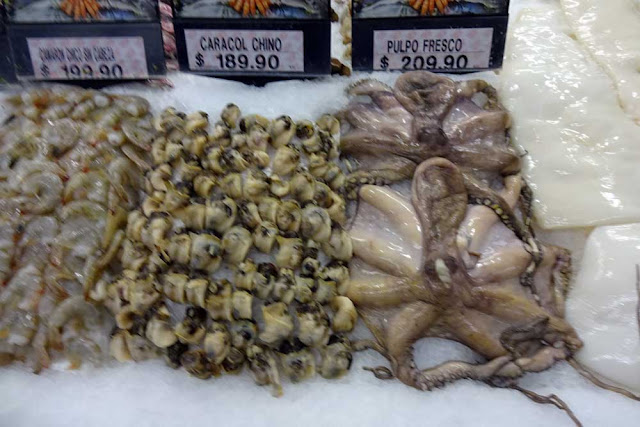 Now here is where I shop. All nice and packaged in plastic. 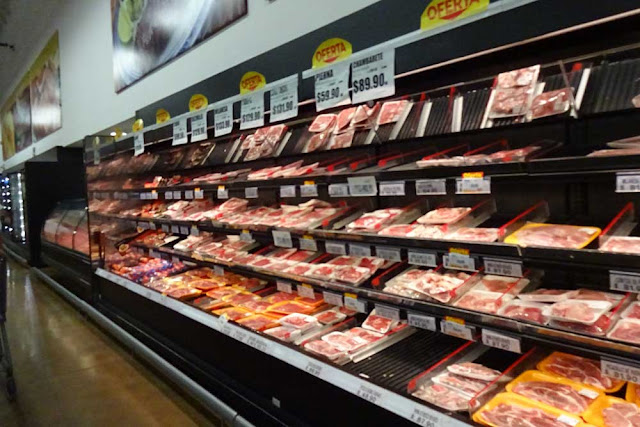 Bill did find something he wanted. A special sausage. Cantimpalo is a dry-cured pork sausage cured with smoked paprika; this smoked paprika is selected between the finest harvests from the La Vera, well known in Spain for its famous paprika. He chops it up and cooks it with scrambled eggs in the morning. 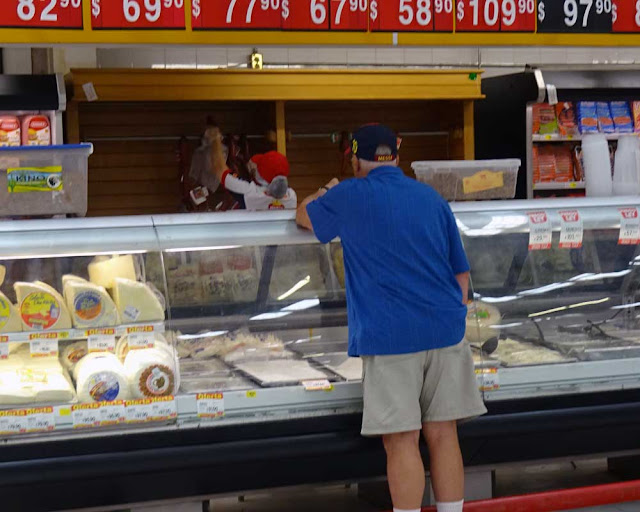 We also stopped at the TelCel Service center to buy GBs for our Mexican MiFi. But so far I haven't been able to get it working. On the way home we passed the Delfineria Sonora. People were walking around in it. For years it has been closed. So we stopped and discovered it was open again. In fact there were shows later in the afternoon. 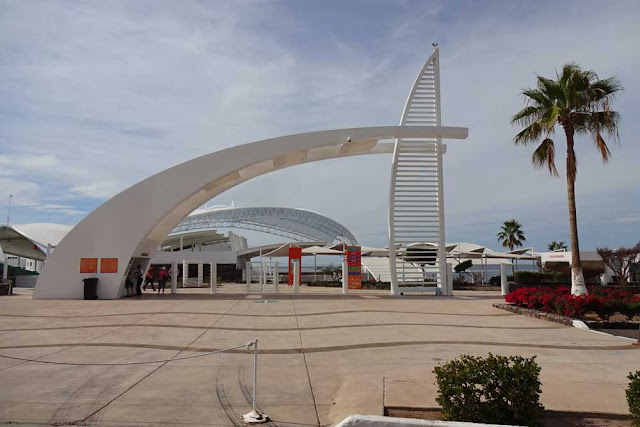 So we came back later for the sea lion show. 60 pesos, US$3 each. We should have asked for the senior discount and it would have been 40 pesos each. We could have got tickets for the dolphin show too but it was too hot to just wait around
A mosaic. 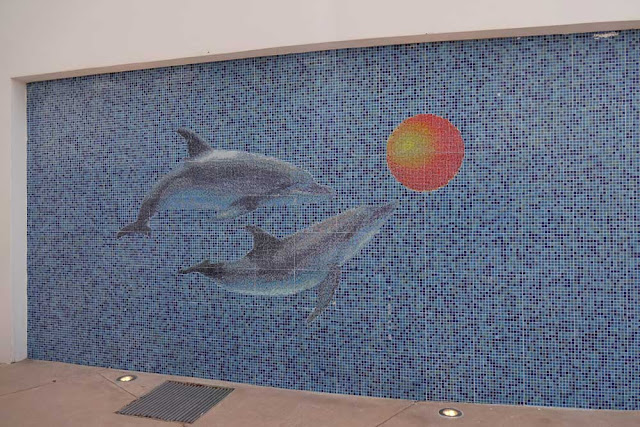 Looking into the sea lion pool. He was just swimming by. Looked so relaxed. 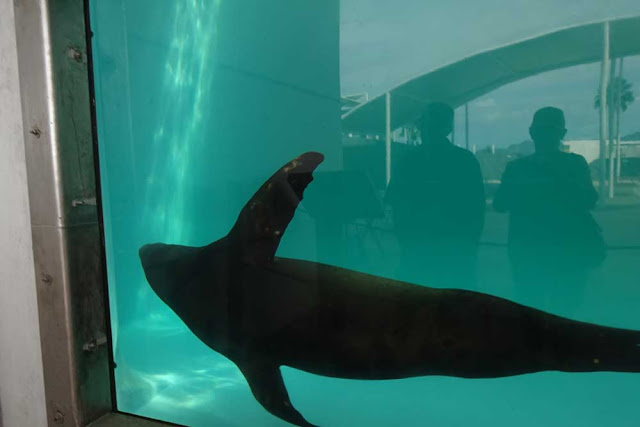 I guess it is the day for naps while working. 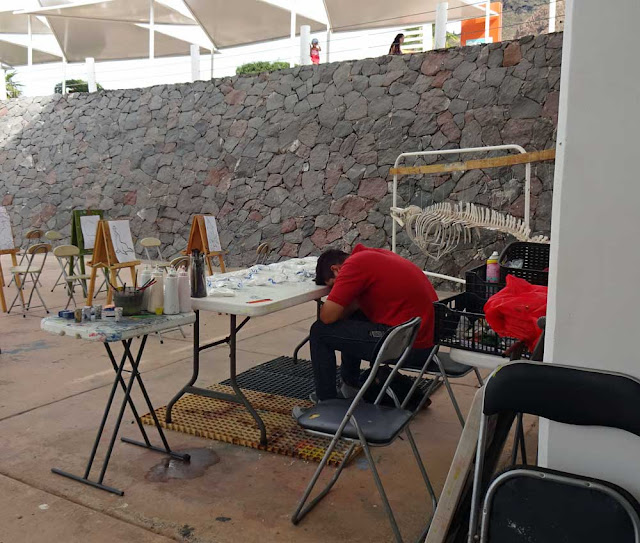 Over looking into the dolphin pool. 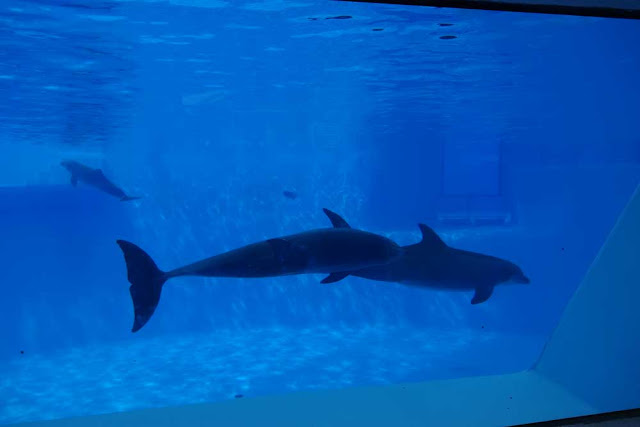 You can go in the dolphin pool and swim with them. You just have to be 59 inches tall. There are also therapy sessions for children. And of course you can have your picture taken with the dolphins and the sea lions. I wish I'd asked how much.
Sitting and waiting for the sea lion show. Nice there was shade. 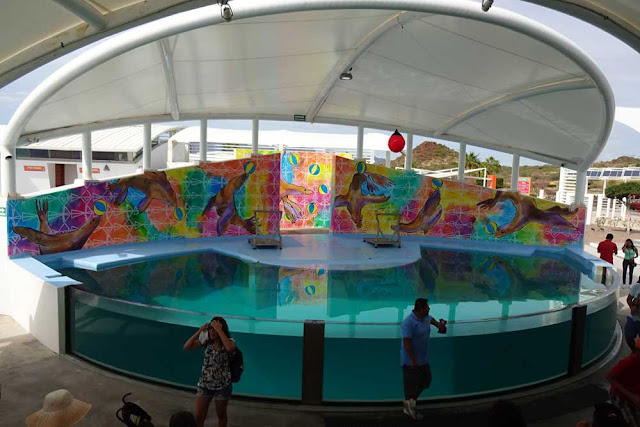 From where we were sitting I could see into the dolphin pool. They had people feeding them and other in the pool with them. 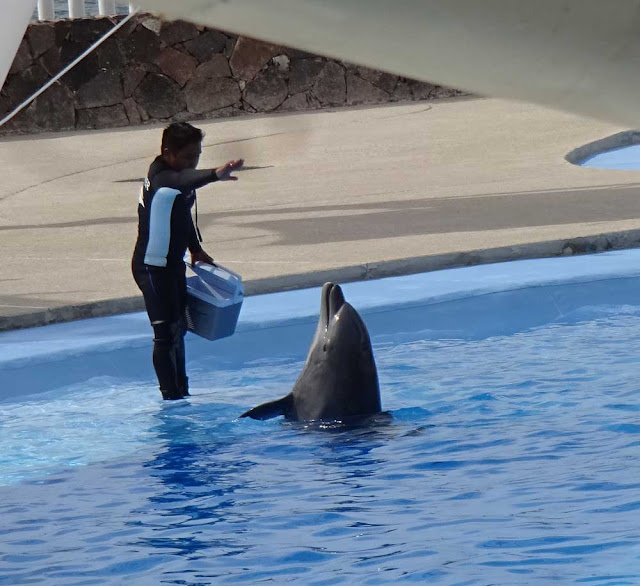 Didn't understand a bit of what was being said, but most of the audience who were Mexican were really laughing and enjoying it. The guy was really funny working with the sea lion. 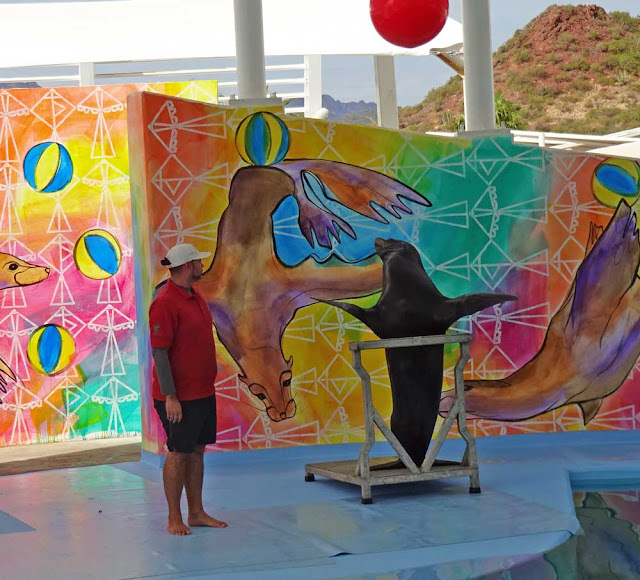 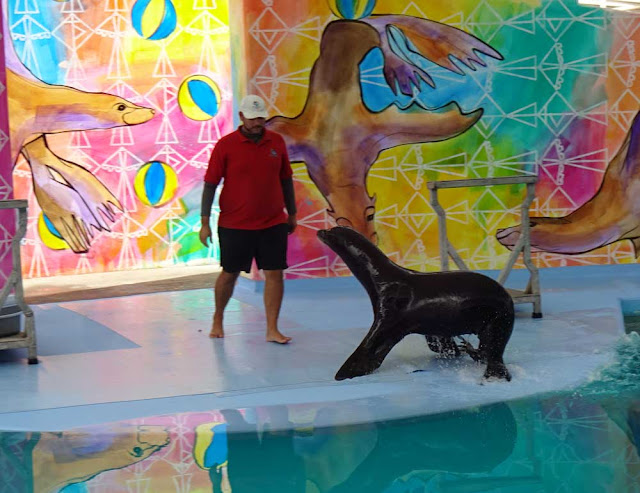 They were dancing here. Wiggling their hips to the music. 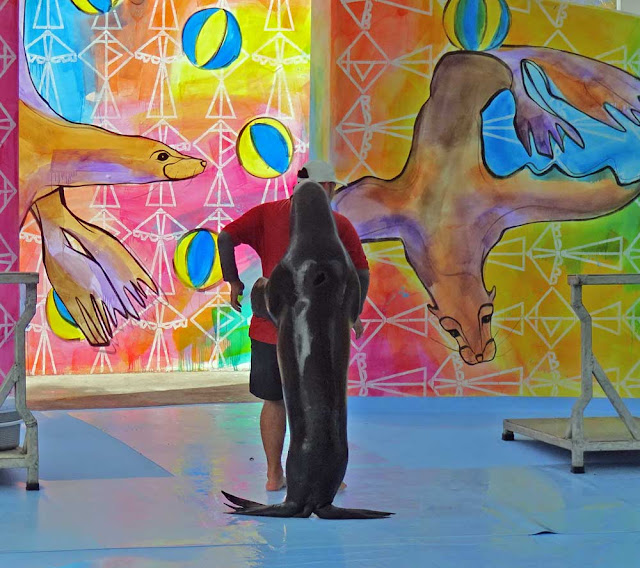 He gave the girl a big kiss right on her mouth. See kept wiping her mouth the whole rest of the show. She kept backing up but the sea lion kept leaning out of the pool. 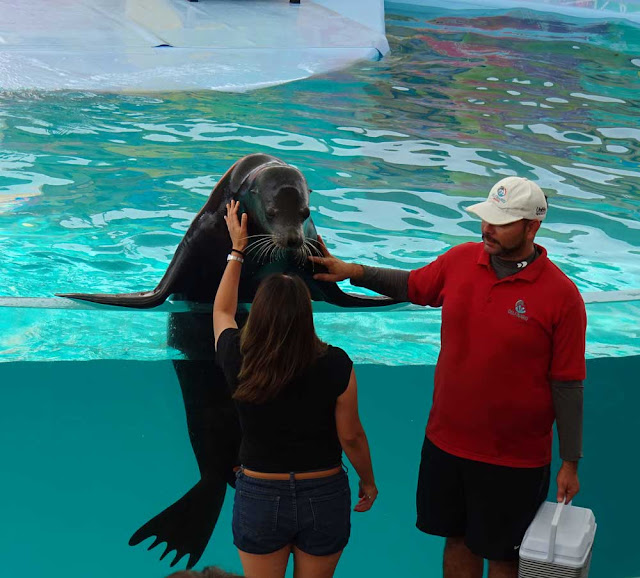 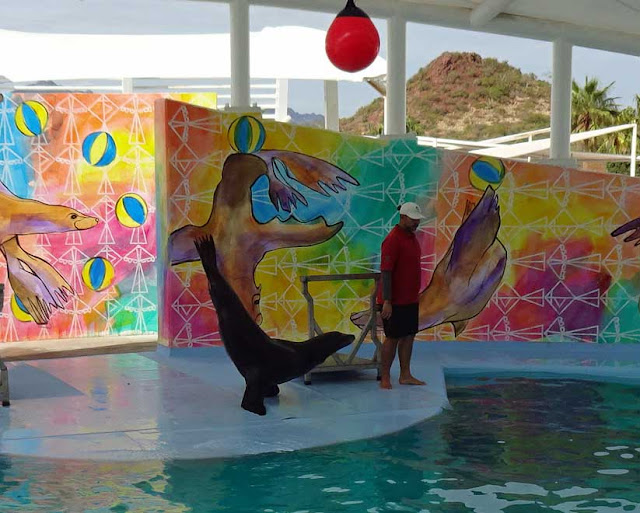 Have lots more pictures and some videos. Might upload one of them another day.
The whole area is supposed to be very "green" lots of solar panels around. 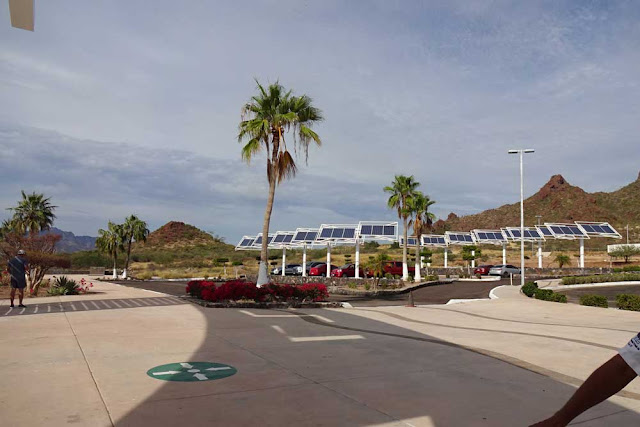 Home for a while then we went out to dinner to a new, for us, restaurant. Colibri means hummingbird. We ate up on the second level outside and the whole time we were eating hummingbirds were flying around. Didn't think to take a picture of any of them. 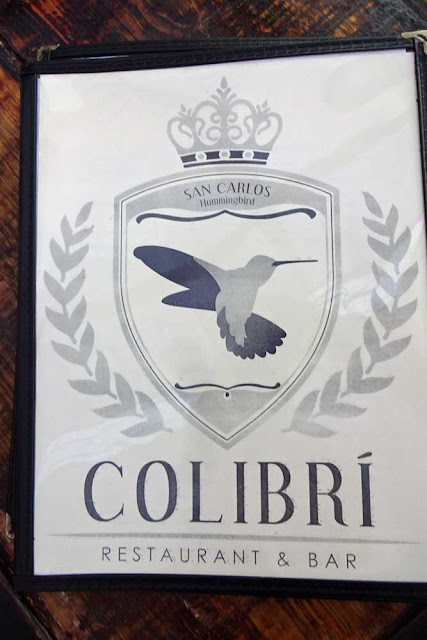 We were all by ourselves up here, looking out over the ocean. 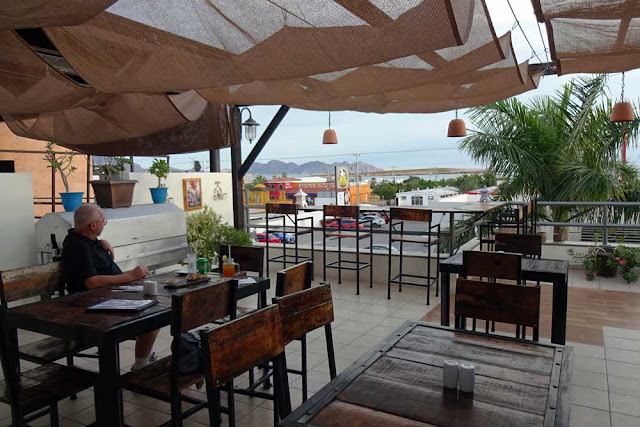 Looking down to the rest of the restaurant. 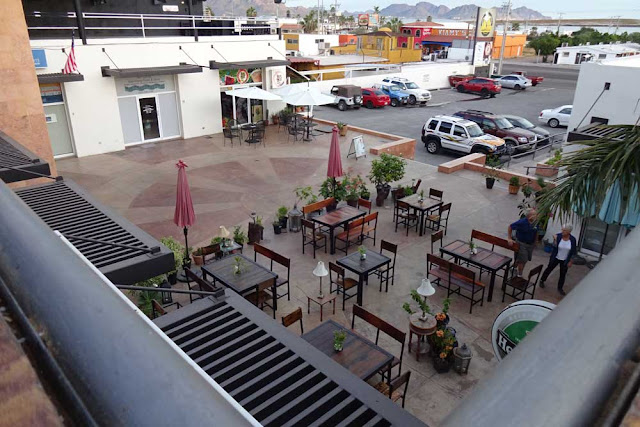 Because it is/was my birthday I conceded to having my picture taken with Bill. Not too bad for a couple of old goats I'm 79 and he just turned 81. 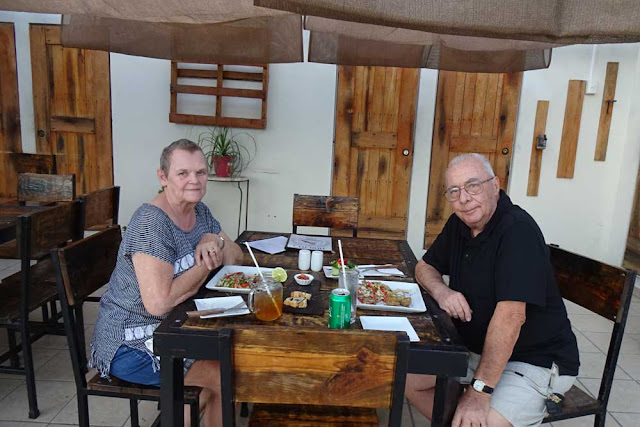 We both had the same thing. It was hard to choose what to have the menu was so good. We had beef fajitas with roasted potatoes and avocado. Bill had an extra salad. Before the meal we got the best bread drizzles with vinegar and oil and with salsa. YUM. 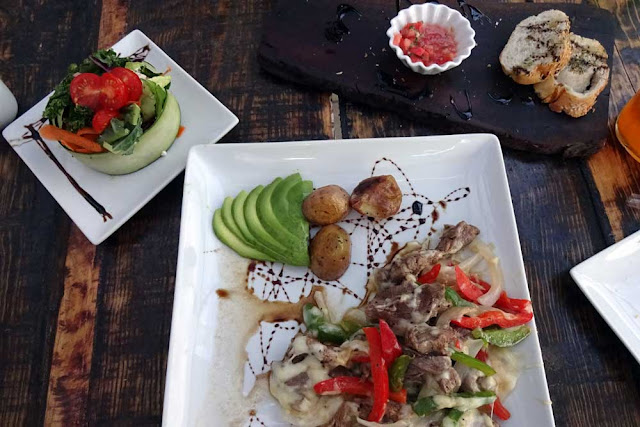 The salad bowl is edible - it is sliced zucchini. 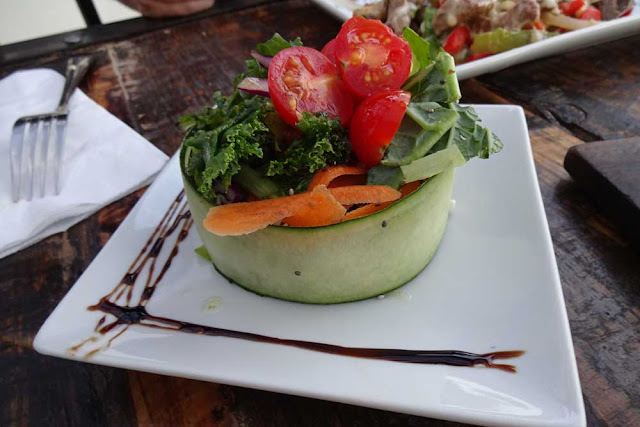 And to top it off just as we finished eating there was a beautiful sunset. Who could ask for more. Good food, loving companionship and beautiful atmosphere. 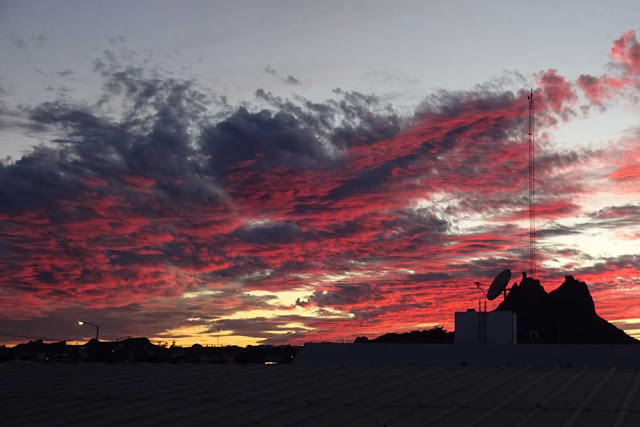 Belated Happy Birthday to you and that is a great photo of you and Bill. Food looks so good especially Bill's salad. Hope you had ice cream and maybe a little cake to celebrate your day.

was too full to have desert. but I do have ice cream AND cake here in the refrig. might be a good dinner tonight.

Thank you - so far so good. Just not looking forward to the heat forecast for next two weeks.

Wishing you the happiest of Birthdays Miss Carol... Hopw you have many more

Thank you so much

Happy belated birthday Carol. Your meals look awesome, as do you and Bill !!!!

Happy late Birthday, dear friend!! Looks like you had a lovely day. I miss those faces!! Cheers, Doug & Nancy!