Still in San Carlos for at least until Monday. Who ever came up with these big, colorful city letter must be getting rich, Every town now has at least one sign.  Our day Thursday. 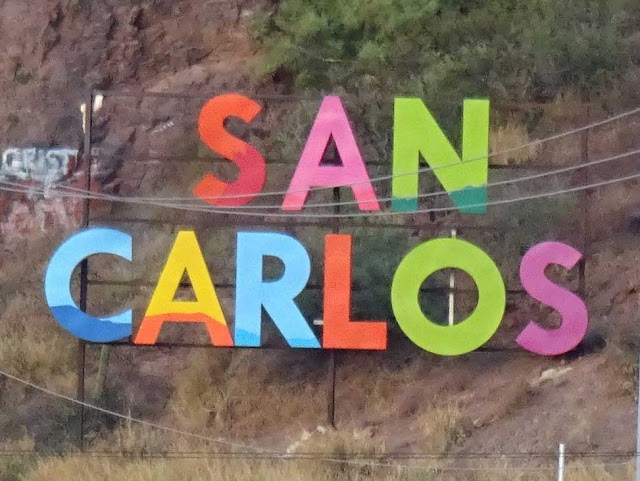 Got up in time for a nice sunrise Thursday morning. Walked across the street from the RV park to watch it and to watch the fishermen. 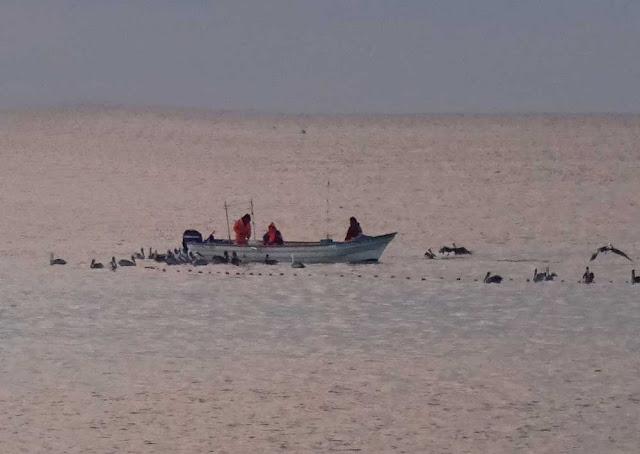 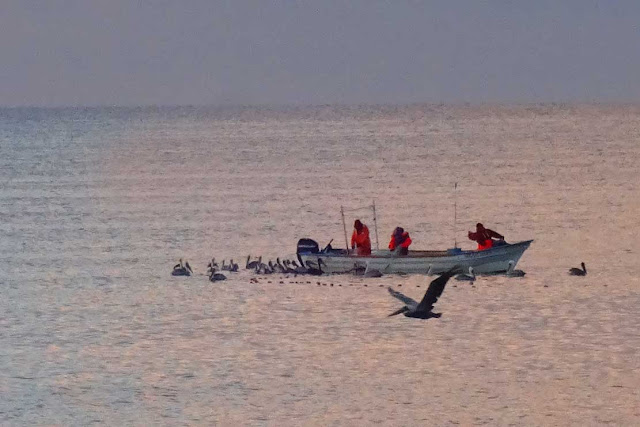 Their net spread out. 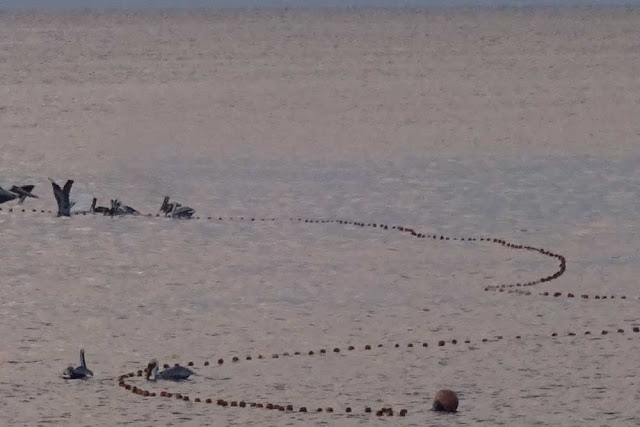 Looking the other direction 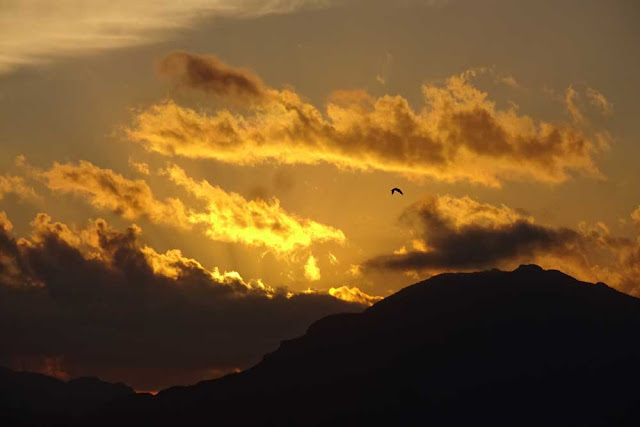 Bill took this last night while we were watching a big group of RVs come in, It was then that we realized we left our good chairs at home. Sitting right in the garage. GRRRR - wonder what else we forgot? 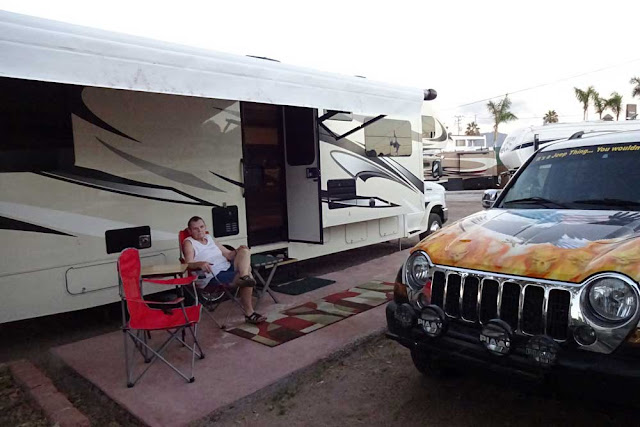 So decided to make a morning trip into Guaymas to go to Sam's Club to get a couple new ones.
But first...we had to go out to breakfast at Chihauhau's. This mural in their patio is so neat. 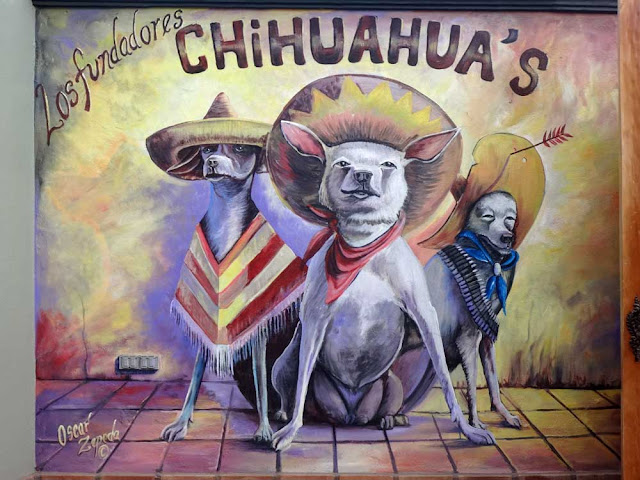 Nice restaurant good attention and good food. Also on Sunday they will have the NASCAR race! - Guess we'll be eating lunch there then. 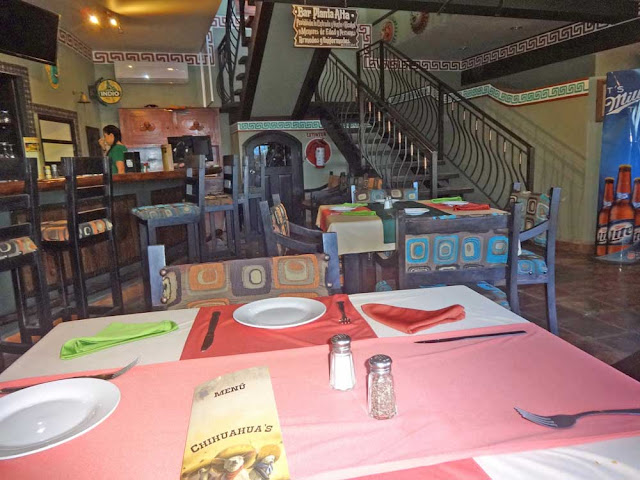 The sign by the stairs leading up to the upstairs bar. Minors, people with guns and in uniform may not enter or buy alcohol. 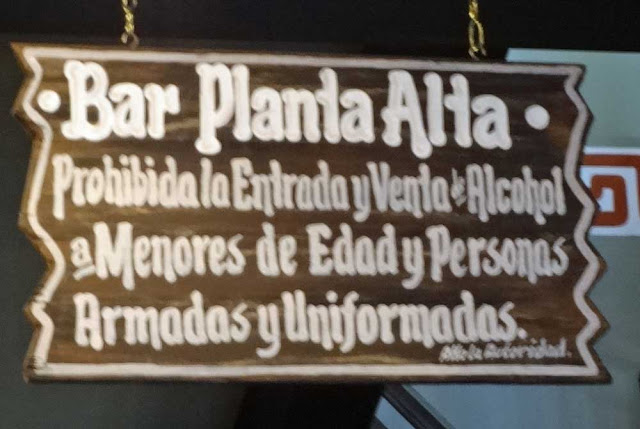 Their banner outside being held down by plastic milk bottles filled with water. What ever works. 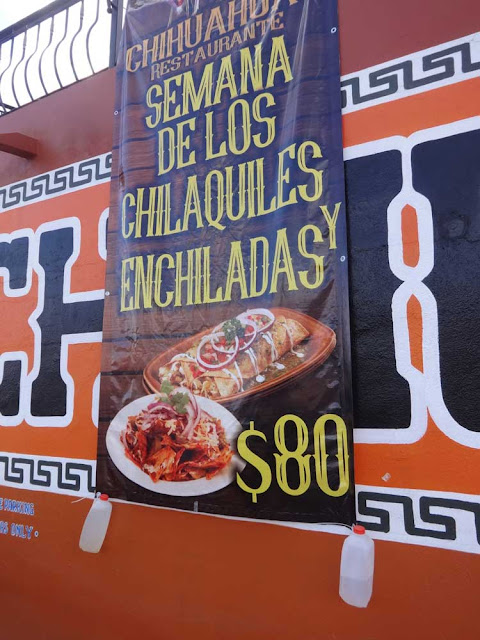 After eating we headed into Guaymas. Took the scenic route by the Estuary. Looking over the bay back at San Carlos. Lots and lots of greenery this year. And lots of water in the estuary. 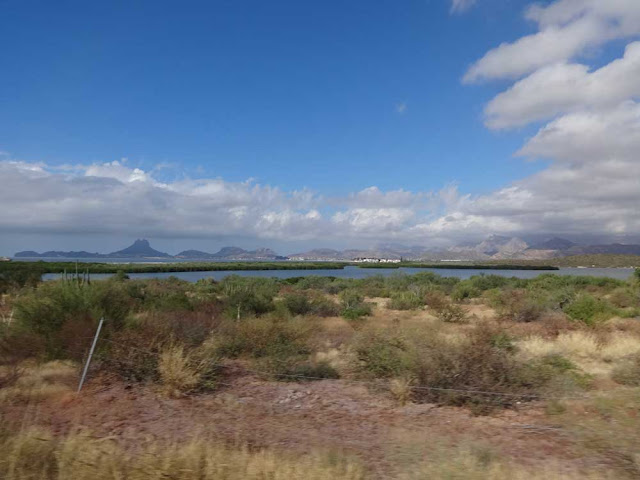 Going through the little water side town of Miramar. A fisherman's shack and boats out on a small peninsula. 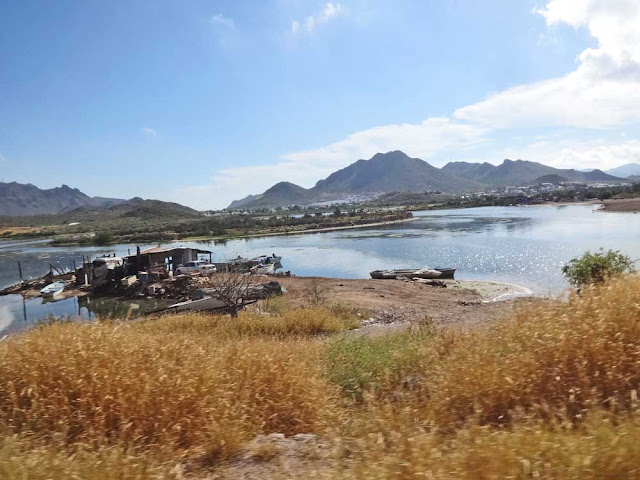 Pretty area and a lot more water than last year. 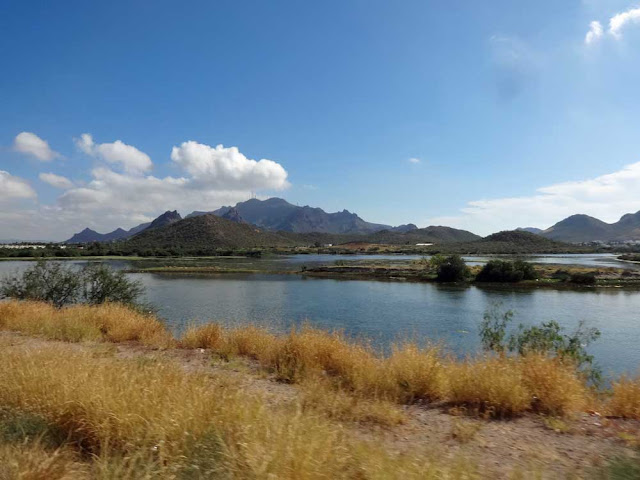 On into downtown Guaymas. As usual lots of traffic and vendors and shoppers. And lots of noise. 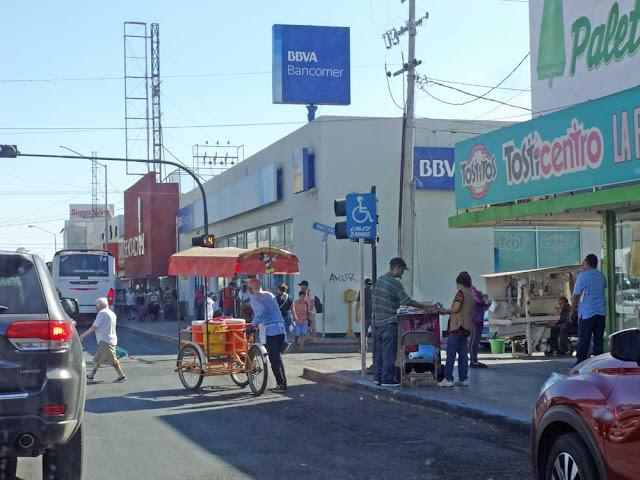 Out by the waterfront. The fountain is working good this year, but no music as in previous years. 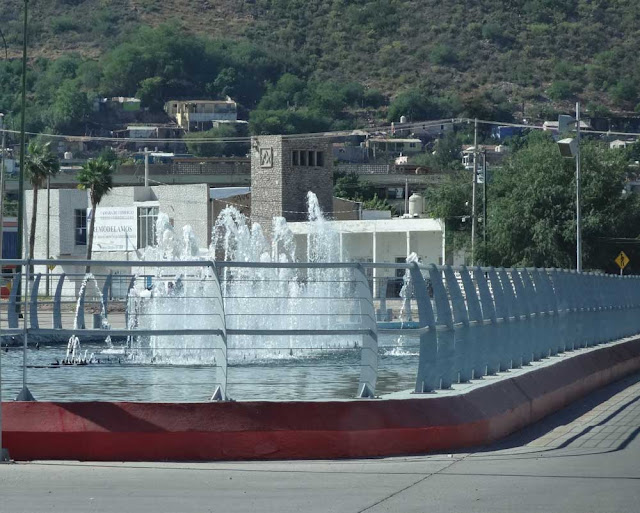 One of the beautiful old buildings that is just falling apart. It's for sale. I keep hoping some one will buy it and restore it. 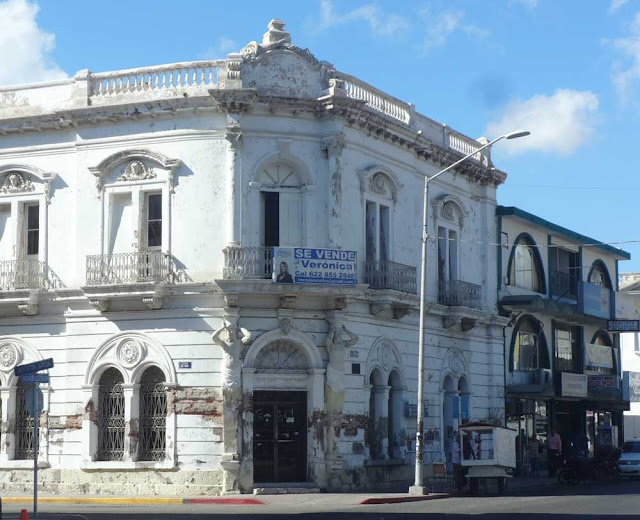 Heading back through town towards WalMart and Sam's Club. 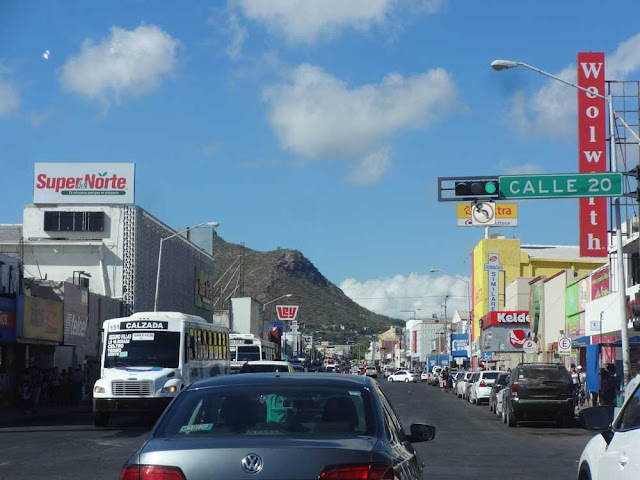 A street cleaner, one on almost every block. 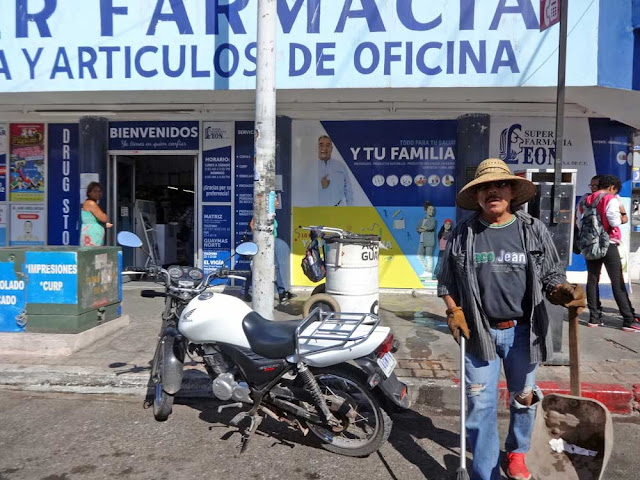 Just took the picture because of the colors. Looks freshly painted. 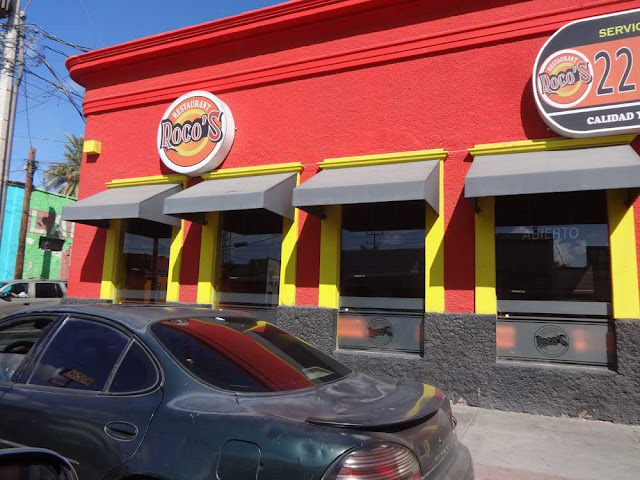 No chairs in Sams, WalMart or Home Depot. Guess it is the wrong time of the year. But lots and lots of Christmas stuff.
Not a beautiful sunset Thursday night. But pictures nonetheless. 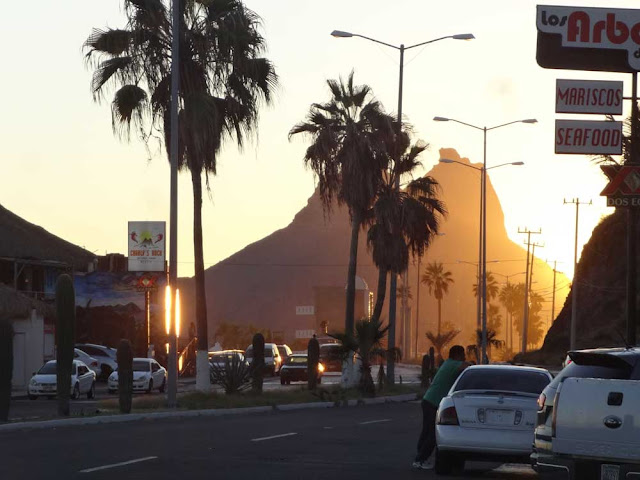 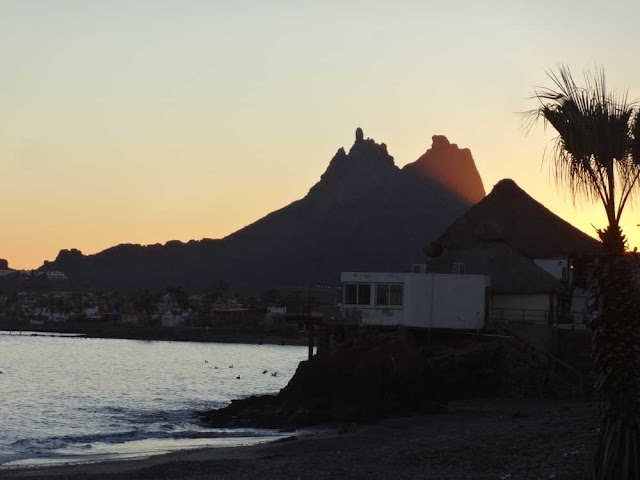 Got the campground's cable working with our TV but only the five major channels. Sure some strange programs on during the day. I think they are from Phoenix.
Today we are meeting friends who live here for lunch on the beach.