Hello from San Carlos 200 miles further south. We left Santa Ana this morning at 8:10. I was dreading the ride because of all the comments I've been reading about the construction. Well from Santa Ana to Hermosillo the road was like this. Smooth, two lanes each direction and even shoulders. Zipped right along. 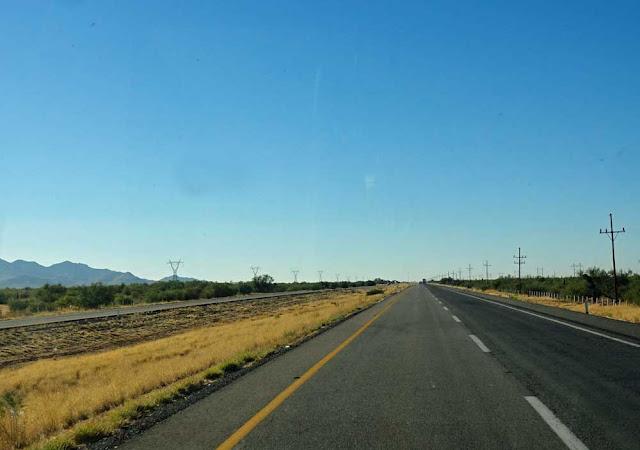 I hate going around these big rigs. Seems like it takes forever to get by them. And I'm not the one driving. The was some pesky wind today hitting us on the drivers side. Pretty steady around 20 with some pretty strong gusts. 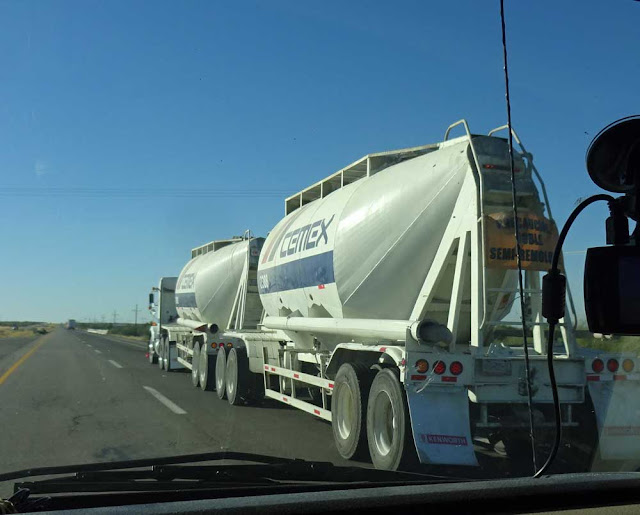 Just more nice road. Even had rumble strips. And not too much traffic this morning. 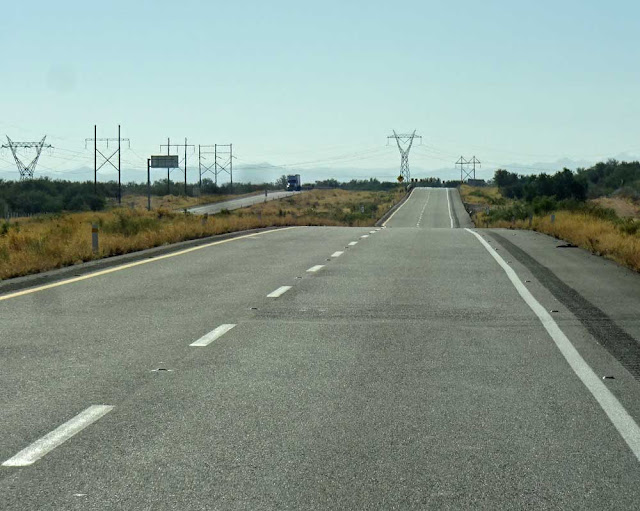 Only the one toll of 195pesos  about US $10 just before Hermosillo. As we passed the toll booth I checked the time it was 10:10. Once here the road went to heck in a hand basket. Horrid!!! 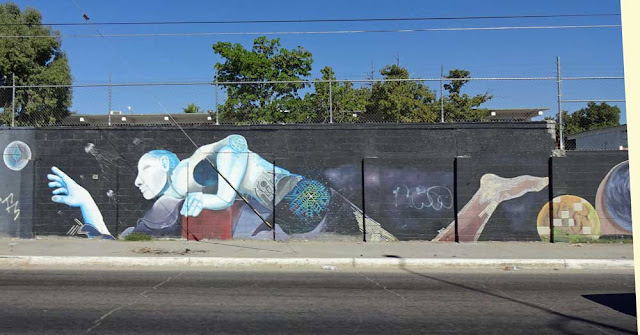 Nothing with the periferico has changed this year. Through some neighborhoods and industrial to commercial areas. There were topes [speed bumps] n this section but not as many as there used to be. 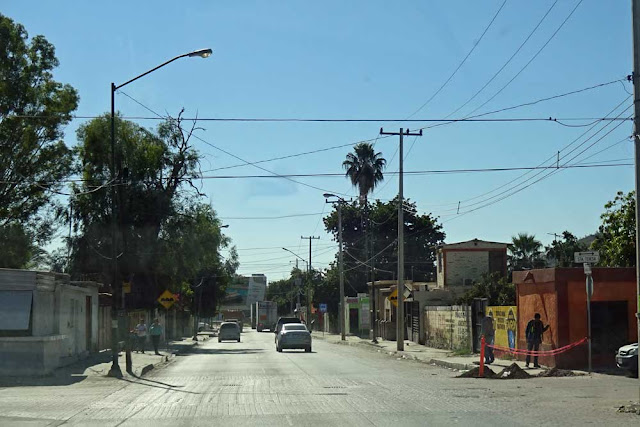 And at each stop light someone either trying to sell you something or trying to wash your windshield. 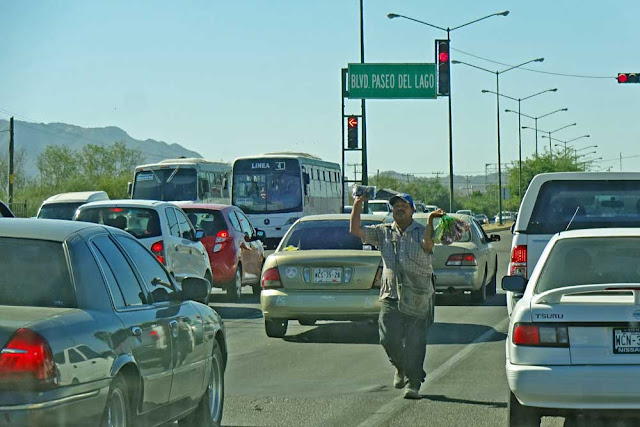 One of the worst of the bad sections. No way to have a smooth ride. 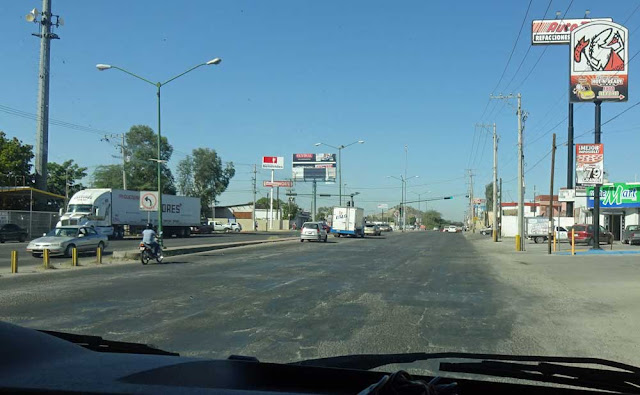 You better be in the far right lane to get to Guaymas, if you go up over the bridge you're in trouble. Don't ask how I know. 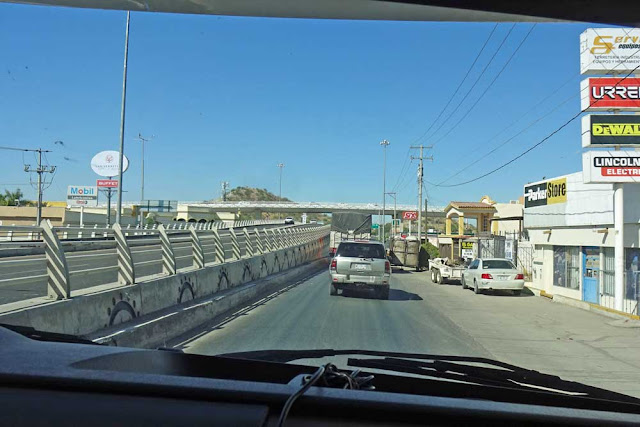 Do you think they could have made this lane any narrower? 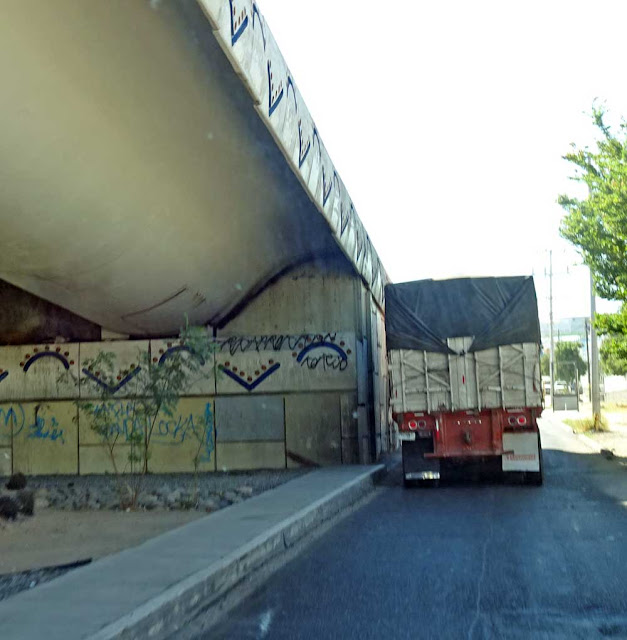 Don't know anything about this picture/mural just saw way up on the high part of a building so snapped a picture of it. Cute aren't they? 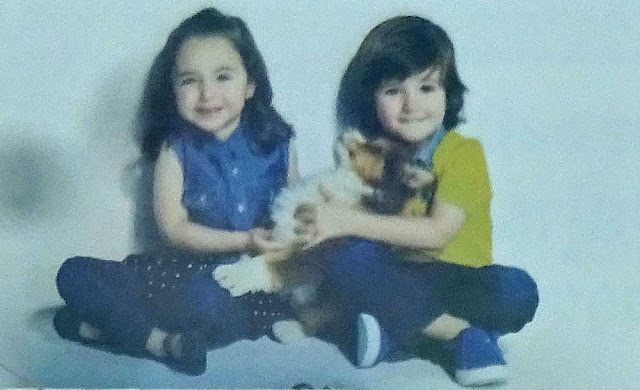 It took us exactly 30 minutes to get through Hermosillo, not bad and no really heavy traffic. I've seen worse. About 10 miles south of Hermosillo the construction began in earnest. We ended up driving mostly on new concrete road with two way traffic. 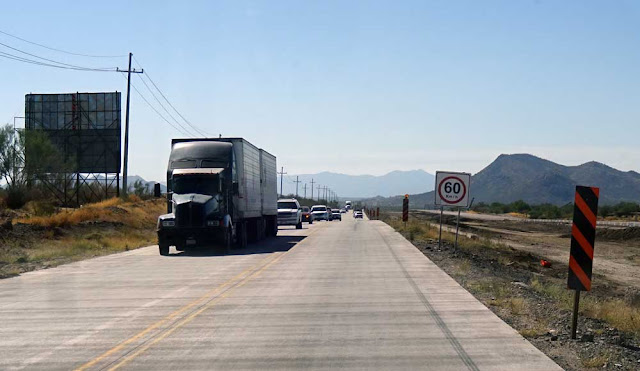 Between Hermosillo and the turn off to San Carlos we switched between the north and south bound lanes 12 - yes that is right - 12 times. Mostly it was concrete, a couple of stretches were asphalt, one short section old asphalt. But all in all the surface was good. Every once in a while there would be two lanes going south so the traffic could thin out a little. We got stuck behind slow trucks twice but only for a while. One of the two lane sections. 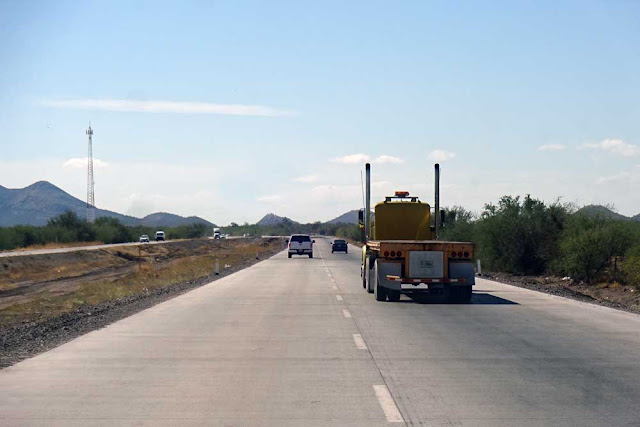 The only problem we had was when we reached the turn off from 15D to San Carlos at the big gas station. IT WASN"T THERE - we were on the wrong side of the gas station...so we pulled into station thinking we could pull across it and get on the highway. NOPE - big block wall there now. So we asked an attendant, he kind of looked at us like "Another lost gringo!" Told us to get back on the 15D stay in right hand lane and go up over the bridge. Then we were back on cut off to San Carlos.
We actually got to San Carlos by 12:20 just about 4 hours. We are staying at Totonaka RV Park, in our favorite spot right up front. We have good WiFi and 30amps. Water pressure is a little low but it usually is. For one week it is 2,695 pesos which comes to US $141. or about US$20 a day. Paid with a credit card and got a good rate - 19.11. 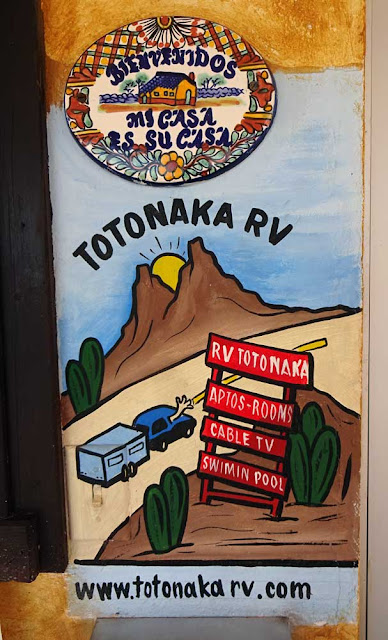 Here we are all nice and parked and settled in for a while. I have never seen the park this empty. Maybe we are here too early for everyone. 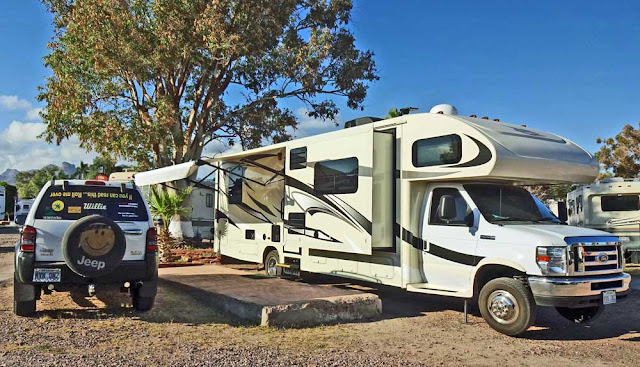 After getting settled we headed for the beach to La Palapa Griega for lunch. Yum. 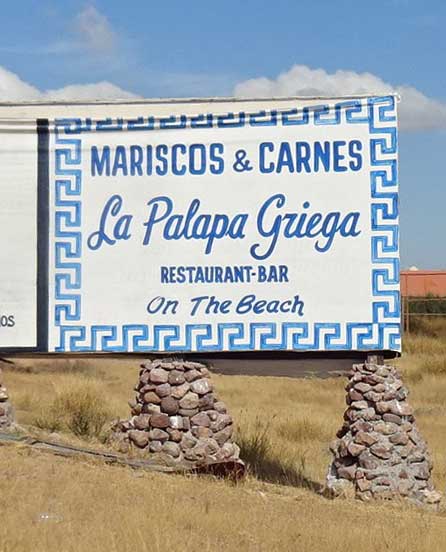 Do you think he is enjoying himself? Watching the waves come in. Enjoying the cool breeze. That is plain water in his glass. 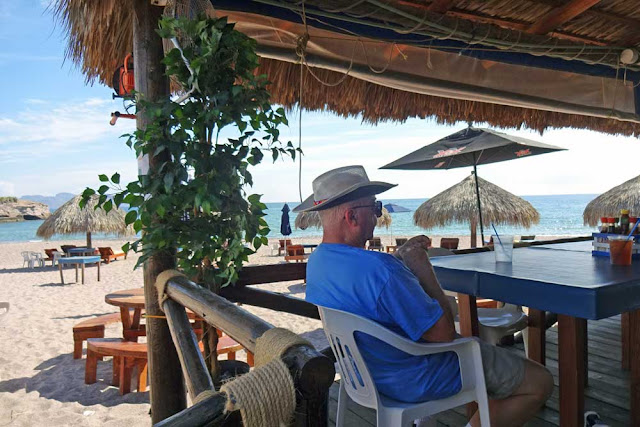 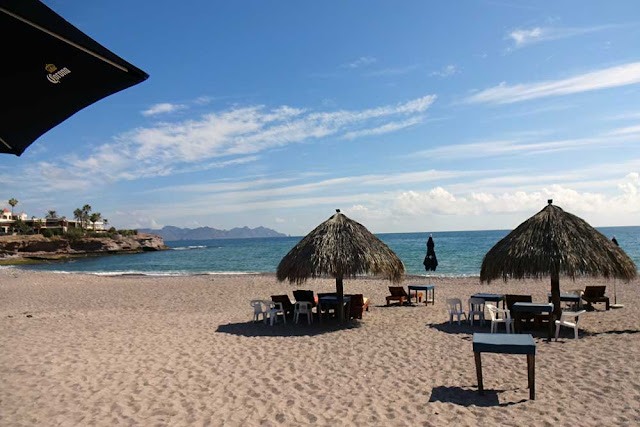 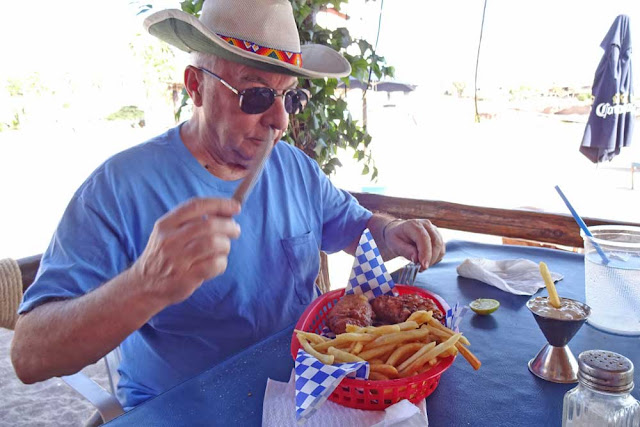 Just one of the buildings I saw heading back to RV 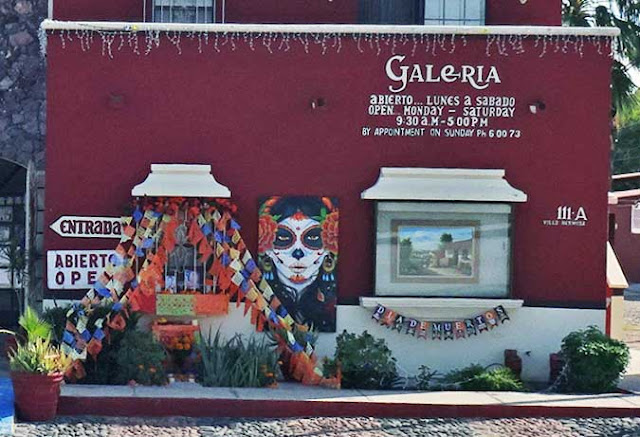 So now I'm working on this and Bill is "reading his book."
Posted by Carol and Bill at 7:07 AM

So happy to read you are safely that far South - we are a little further South in Rincon de Guayabitos - arrived yesterday late afternoon and had a delightful sunset that evening. Stay safe and travel safely.

I have been over that bridge in Hermosillo before... lol Tom

you only do it once.

is it hot there - very warm and humid here in San Carlos.